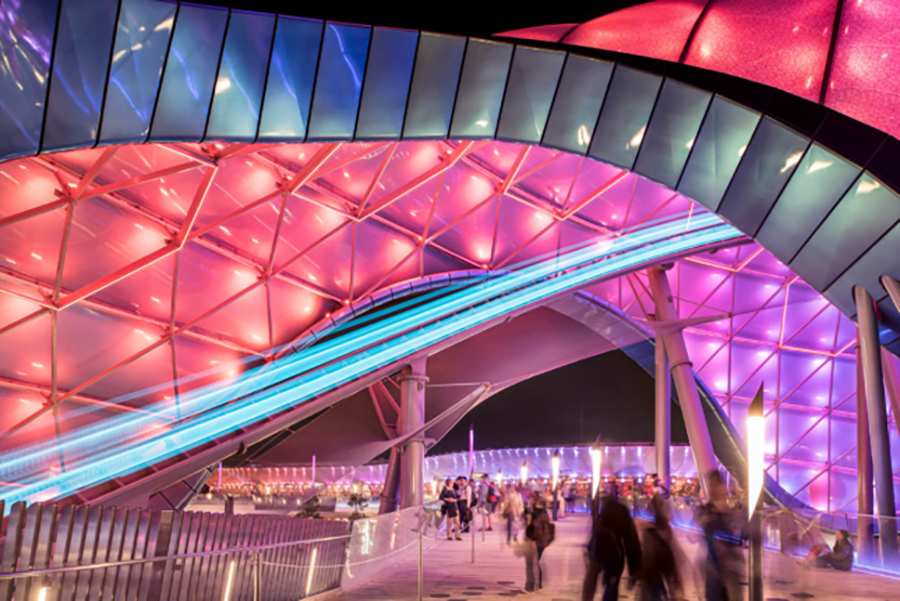 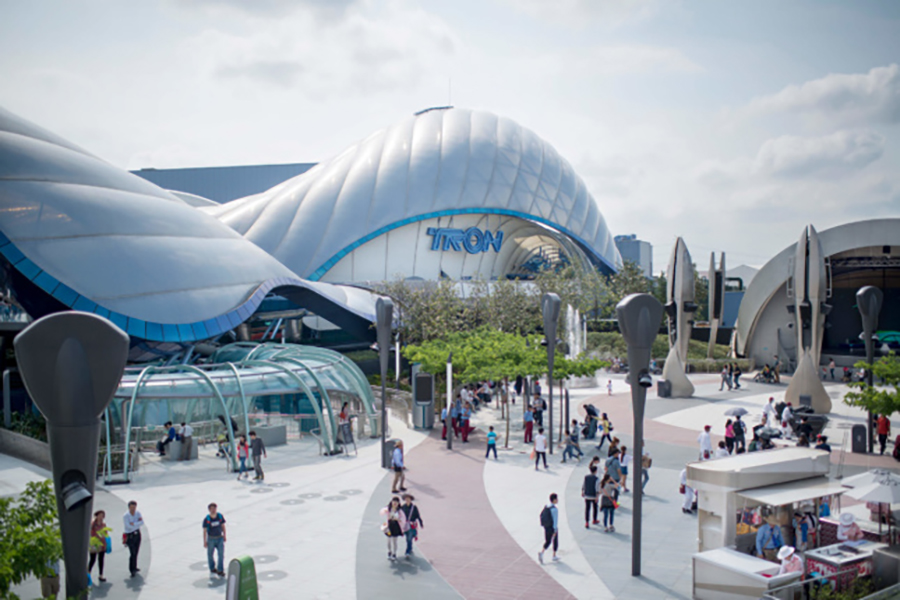 <
►
>
A skin for the spectacular? It has to be ETFE. Image: Shanghai Disney Resort Tomorrowland. (Courtesy Grimshaw Architects)

From biodomes to Disney resorts, “Sheds” and stadiums, ethylene tetrafluoroethylene, better known as ETFE, has become the material of choice for architects designing a venue for the spectacular. Appealing to designers as an affordable, translucent building skin, the material is now the go-to polymer for flamboyant facades. The Architect’s Newspaper (AN) spoke to three firms leading the way to get the lowdown.

“When we designed Eden over twenty years ago, this was the largest installation of ETFE, which had principally been used for small sports buildings,” said Andrew Whalley, Partner & Deputy Chairman at Grimshaw Architects. Whalley was, of course, referring to the Eden Project in the U.K.’s southwest, the project that put ETFE and its use for buildings on the map. Previously, the material had been used mostly in the aerospace industry, with the odd agricultural project thrown in. Now it was being used for huge, bulbous “biomes” that drew inspiration from Buckminster Fuller.

“I think the Eden project certainly gave it a much higher profile, which led quickly to its use on several high-profile buildings. This rise in popularity has lead to a continual refinement in the product, and with secondary applications,” added Whalley.

Grimshaw has since gone on to be a pioneer of the polymer in architecture. Their U.K. National Space Center in Leicester was another landmark project, and, more recently, the firm has stepped it up a level, with the dazzling Disney resort, “Tomorrowland,” in Shanghai. Whalley continued, “Current ETFE is much more transparent than its earlier version, is available in a range of color tints. It can be fritted, and combining this with variable air pressures can change the amount of light passing through the envelope.”

Light and colour certainly abound at Tomorrowland. David Dennis, Associate Principal at Grimshaw explained how this was achieved through a double-layered ETFE cushion that spans 164 feet across a complicated twin-gridshell canopy. This is then held in place by custom-formed aluminum clamps that respond to the tight bending and twisting of the structure.

“ETFE’s inherent flexibility permitted spanning these complex forms. Meanwhile, advancements in imbedded color and custom-applied ‘frit’ patterns enabled a backdrop suitable for both daytime and nighttime light shows,” elaborated Dennis. “The canopy structure required a lightweight cladding that could keep guests dry and comfortable in Shanghai’s wet summers. At the same time, it also needed to be an expressive and iconic canvas for lighting effects and projections that celebrate Disney’s stories and capture the Tomorrowland theme of an optimistic future,” he added. “ETFE met these needs, providing flexibility of form and advanced capacity for showcase.”

But how is ETFE being used on U.S. shores? Alloy Kemp, a Senior Project Engineer at Thornton Tomasetti‘s New York office, was on hand. The engineering firm has already worked on numerous ETFE facades, including Bancof California Stadium (for the Los Angeles Football Club, MLS), the U.S. Bank Stadium (for the Minnesota Vikings) and the Hard Rock Stadium (for the Miami Dolphins) in Florida.

Right now, Thornton Tomasetti is working with Diller Scofidio + Renfro (DS+R) and the Rockwell Group on The Shed at Hudson Yards which, yes, you guessed it, has an ETFE facade. According to Kemp, The Shed uses a pneumatic system, whereby three foils made into a panel are inflated with air. “The air is not structural; it serves to stabilize the foils,” said Kemp. “The outer foil is fritted (printed with silver ink in a dot pattern) to reduce the light transmission of the panel into the space.” The middle foil, meanwhile, is clear, and the inner foil is white, with 20 percent opacity. Kemp remarked that the “overall effect is to diffuse and scatter the direct sunlight into the space.”

ETFE is also representing the U.S. on foreign soil, too. Back in the U.K., Philly-based studio KieranTimberlake Architects recently used the material to clad the U.S. Embassy in London. Partner at studio Matthew Krissell told AN how the “single layer tensioned membrane,” arranged in an array of sails on three sides of the building, optimized natural daylighting with a high level of transparency. Meanwhile, the scrim also provided a second air gap to give further resistance to thermal transfer.

And so what of the future of ETFE? Whalley shared that Grimshaw is currently looking at new versions that integrate high-efficiency photovoltaic cells and low-emission coatings. He, along with Dennis, Kemp, and Krissell, will be talking about ETFE (and the projects mentioned here) in greater detail at the Facades+ NYC conference this April 19. Whalley is the event’s co-chair while the rest will form a panel specifically on the material.