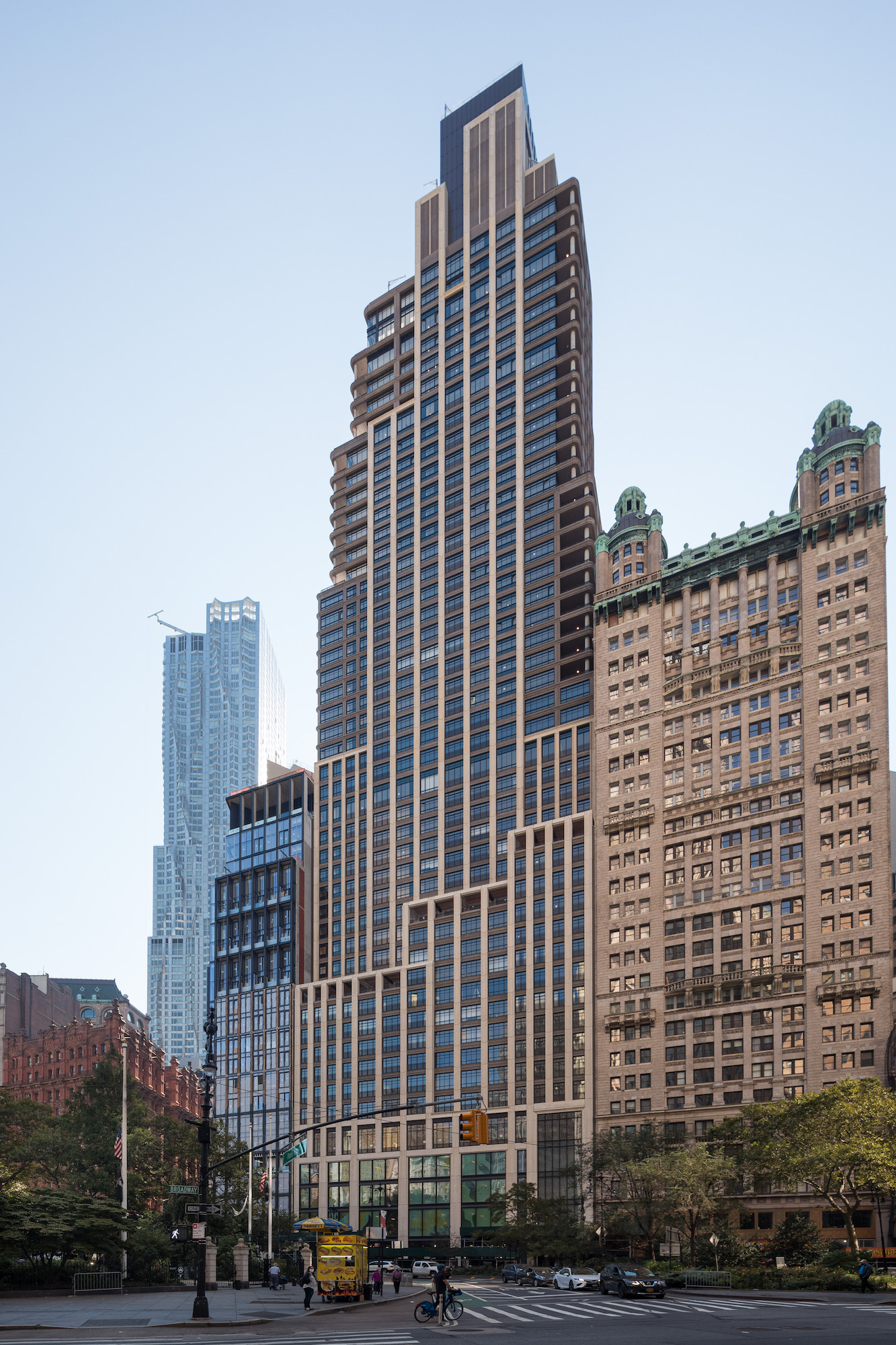 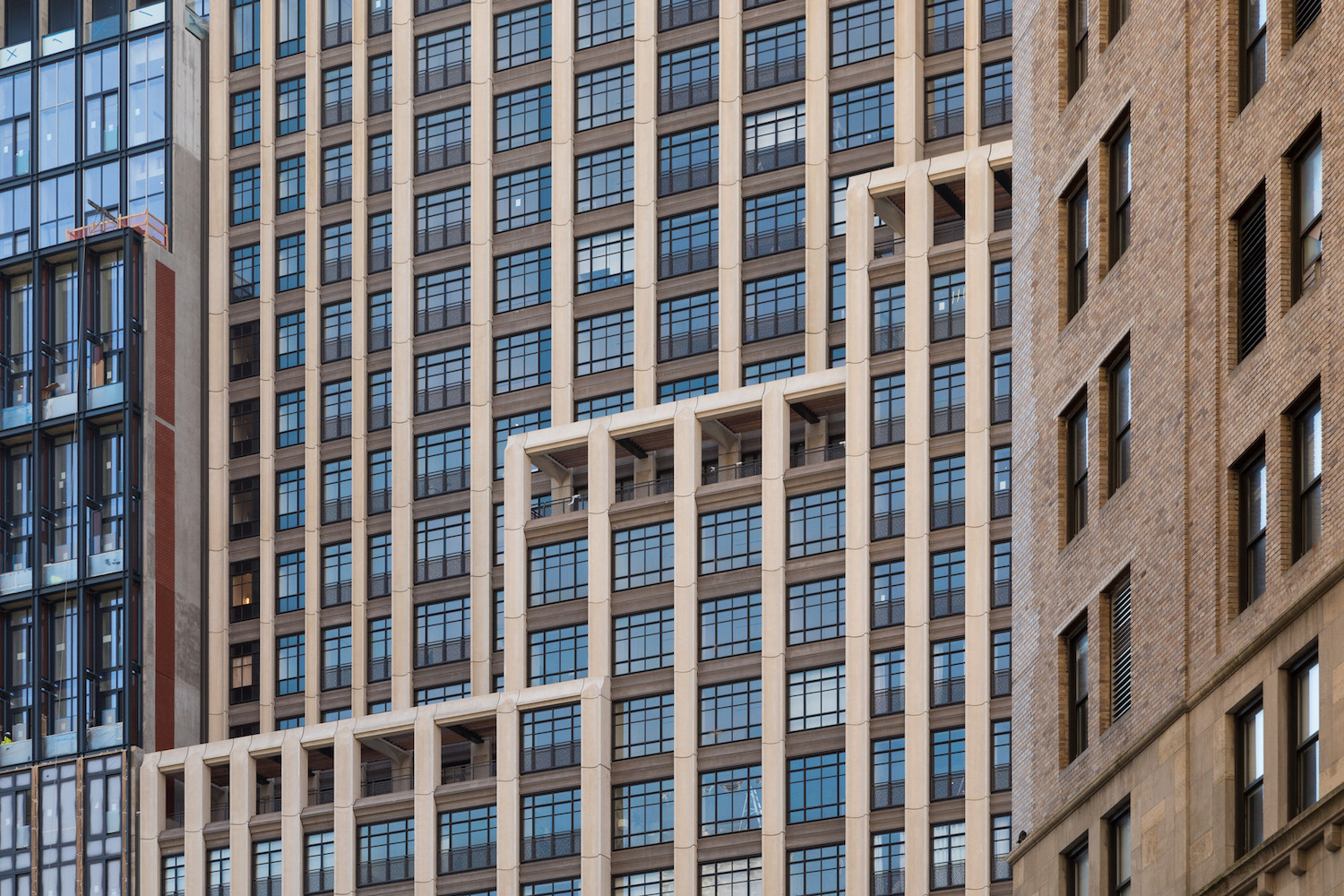 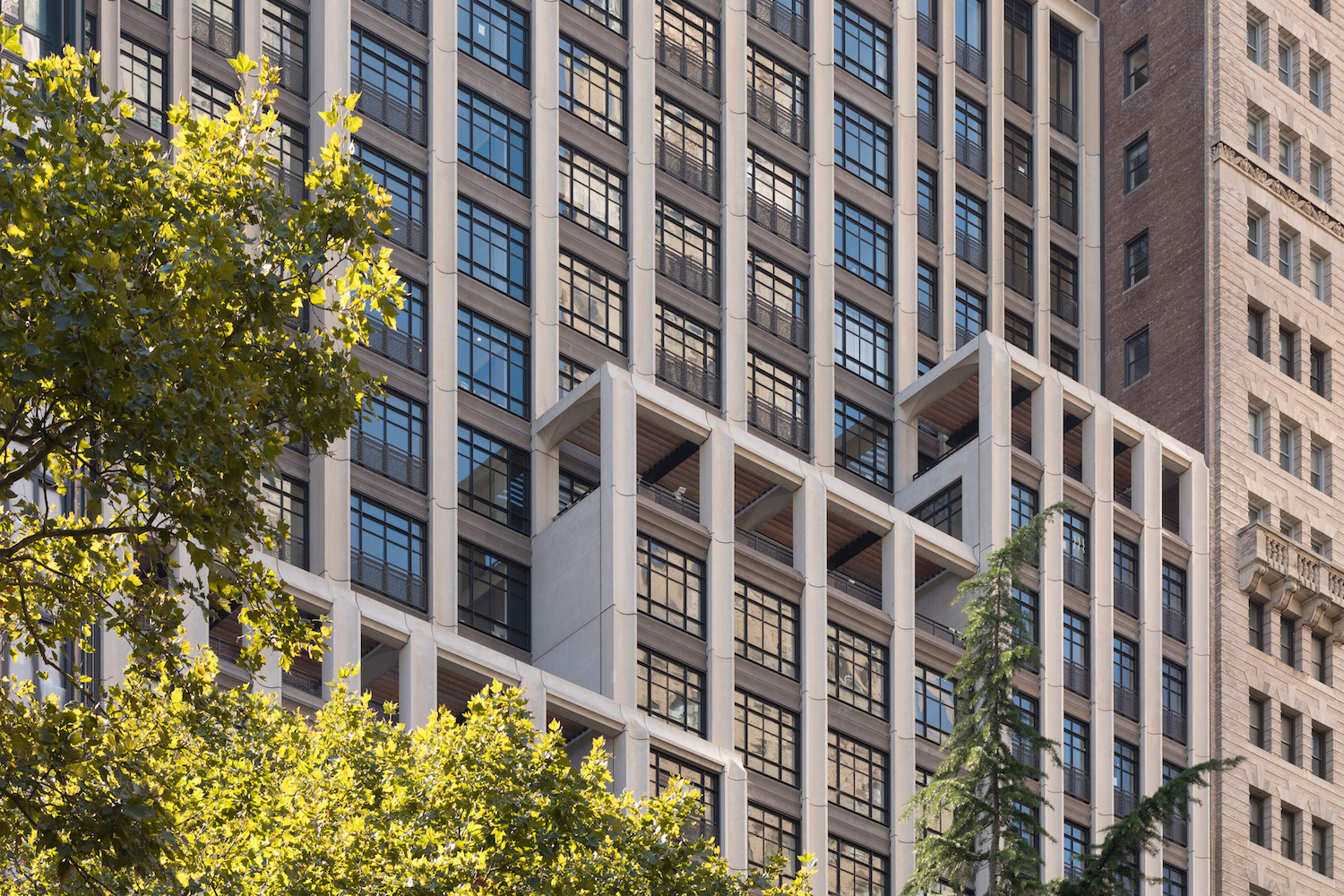 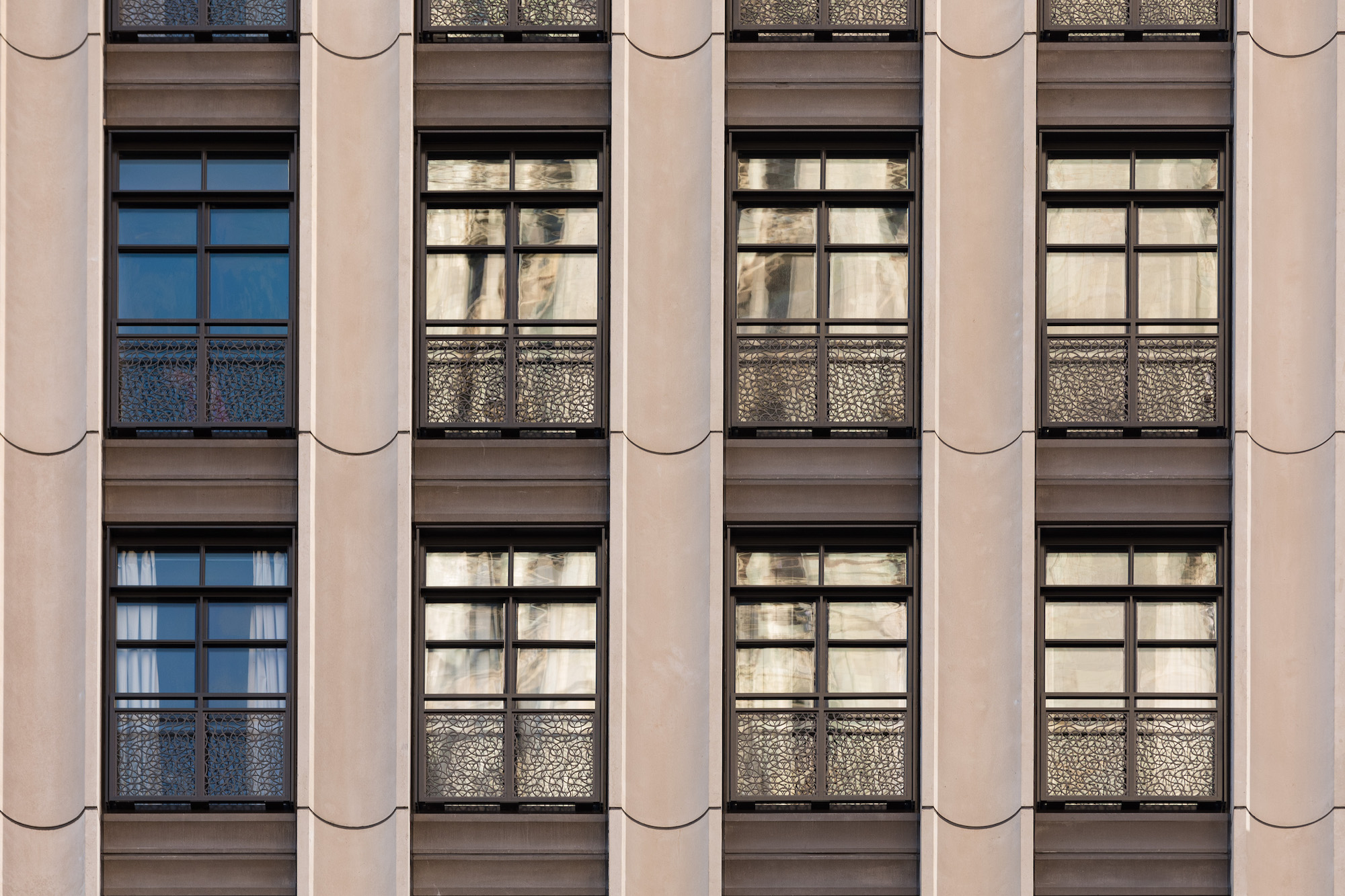 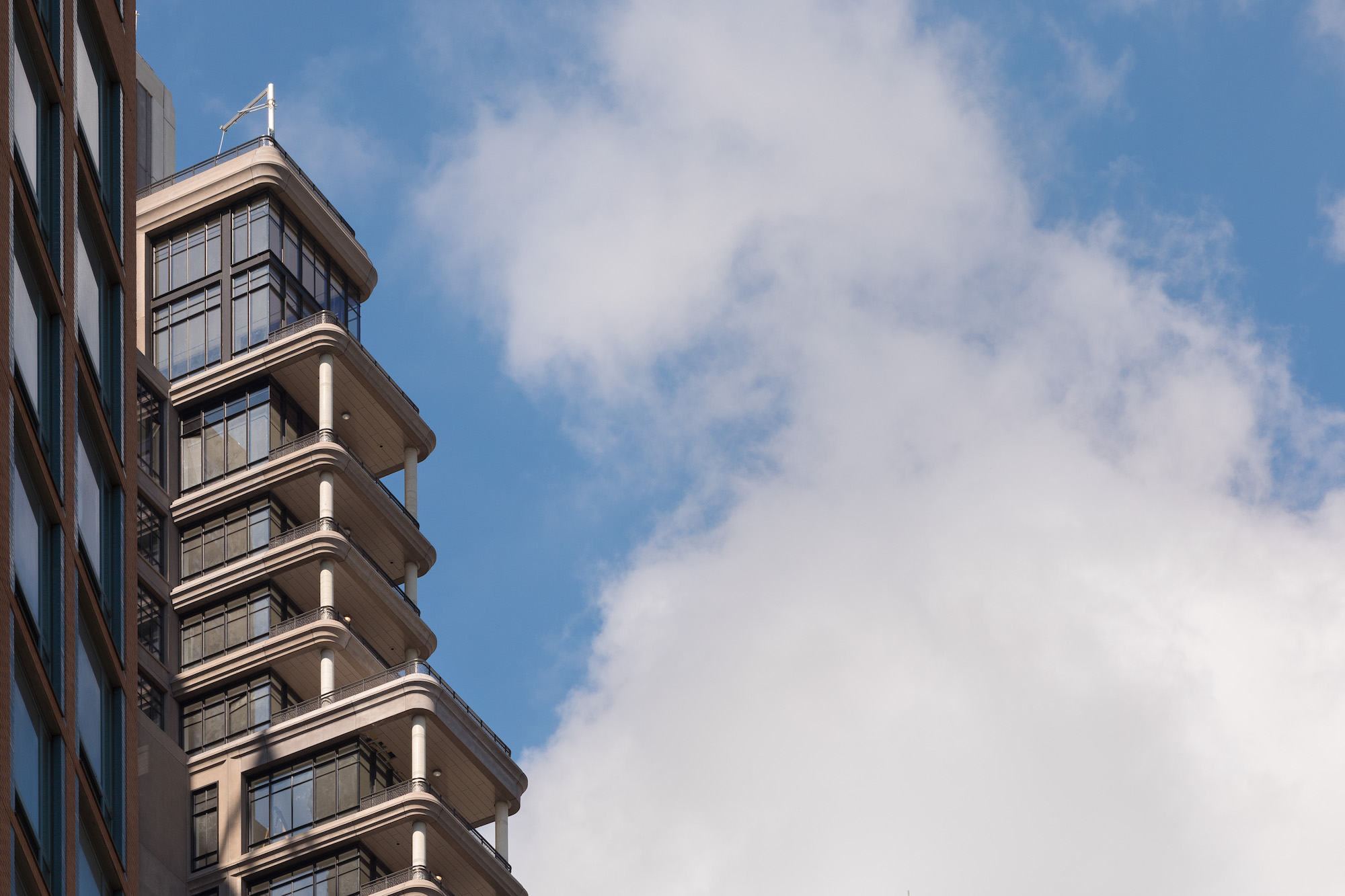 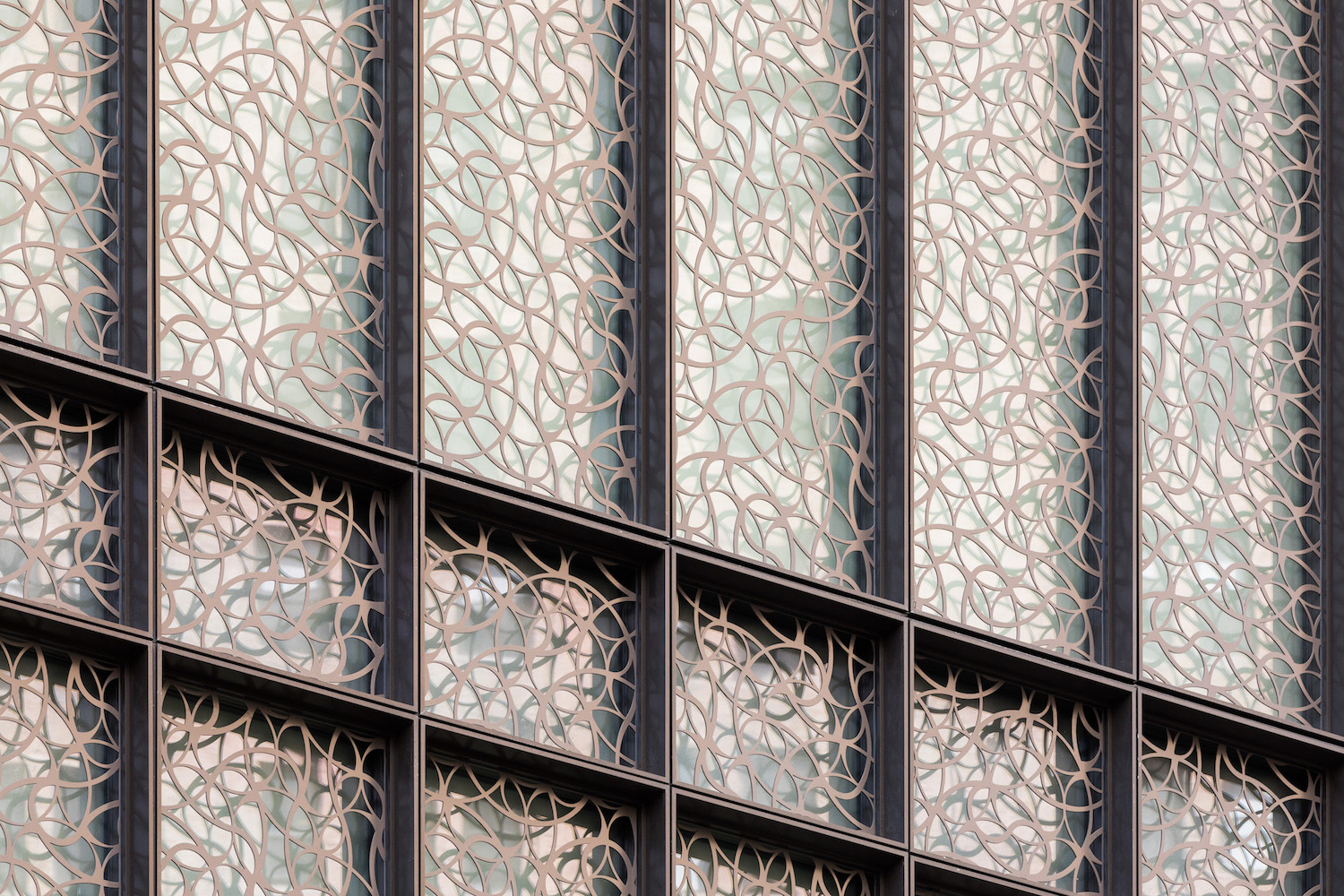 <
►
>
The COOKFOX-designed 25 Park Row, which is located by Manhattan's City Hall. (Courtesy of COOKFOX Architects)

COOKFOX Architects has been busy lately. The New York-based architecture firm has completed or is just wrapping up scores of projects across the city, ranging from twin-towered Ten Grand and One South in Williamsburg to St. John’s Terminal in Tribeca. Central to these projects is a fine-tuned understanding of context and unpretentious design cues that embed the structures within their setting. Scheduled to wrap up next year, 25 Park Row is one such project and joins the Downtown scene with fluted precast concrete and dramatic setbacks.

The 50-story tower is located adjacent to City Hall Park and stands in close proximity to some of Manhattan’s earliest and best-known skyscrapers, including Cass Gilbert’s Woolworth Building, McKim, Mead & White’s Manhattan Municipal Building, and R.H. Robertson’s Park Row Building. While designed in myriad styles, the historic skyscrapers in the area are all renowned for their rich masonry and metal ornamentation, and captivating historicist features ranging from flying buttresses to an iteration of the Choragic Monument of Lysicrates.

Rather than imitate the old, COOKFOX’s design for 25 Park Row hits on the key points of turn-of-the-century skyscraper design: The concave concrete panels yield a substantial degree of depth to the facade and the resultant play of light and shadow, while biophilic metalwork bears a relation to surrounding ornamental filagrees. The formidable heft of the tower is extenuated through a series of setbacks topped with loggias, which form something of an Olympian stairwell overlooking City Hall Park. Additionally, the tower tapers as it rises and the corner balconies curve in a Streamline Moderne-like flourish.

Artex Systems, an Ontario-based manufacturer, fabricated the precast components of the curtainwall modules; the concave concrete light-brown spandrels and off-white piers. Collaboration between COOKFOX and Artex began at the onset of the design process. “There was close collaboration as part of the design assist process, but the relationship also informed how we would integrate the construction sequencing, joint spacing, and reveals into the design,” said COOKFOX partner Brandon Specketer. “The final curvature was a design element we were able to see remain relatively unchanged from concept through fabrication and installation, and that back and forth working relationship also informed the railing pattern and final finishing.”

The site itself is located midblock, and that claustrophobic setting presented logistical hurdles for the design and construction teams. To this end, COOKFOX signed on contractor Urban Atelier Group at the start of the schematic design phase to fine-tune construction sequencing, delivery of the project materials, and schedule the use of crane and hoist. The curtain wall modules largely came in standard widths of 9 and 16 feet and were installed at a pace of up to 15 panels a day.