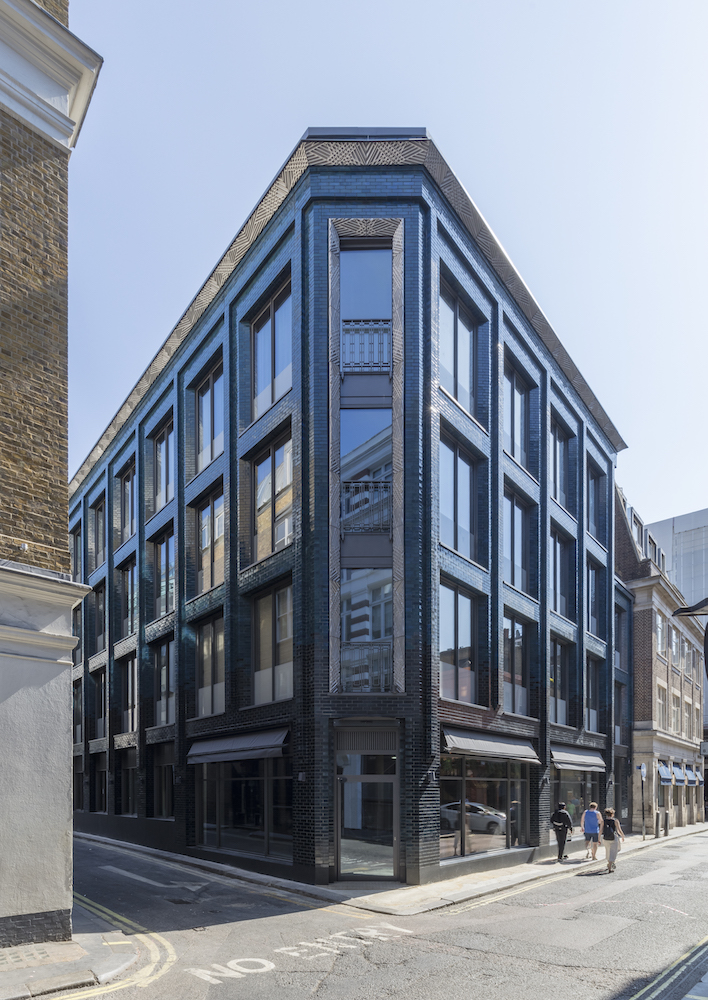 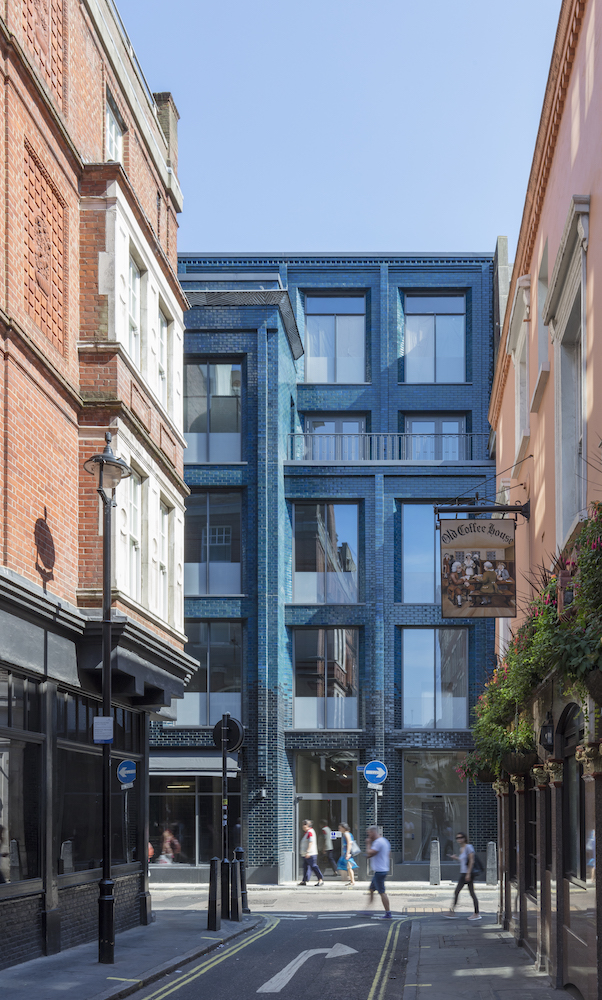 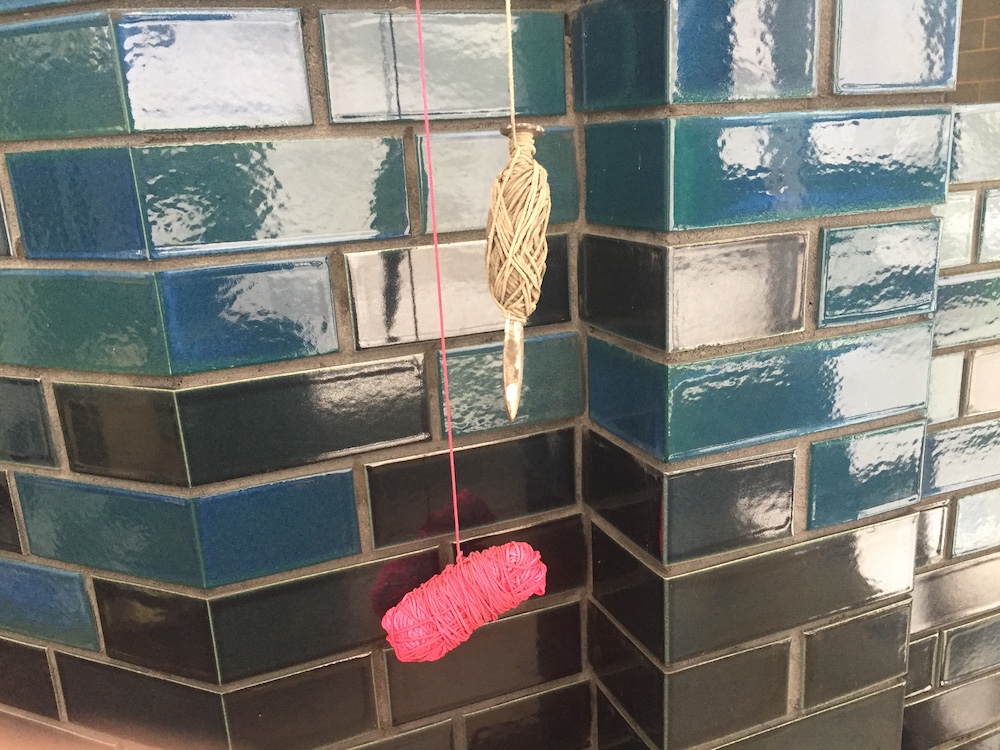 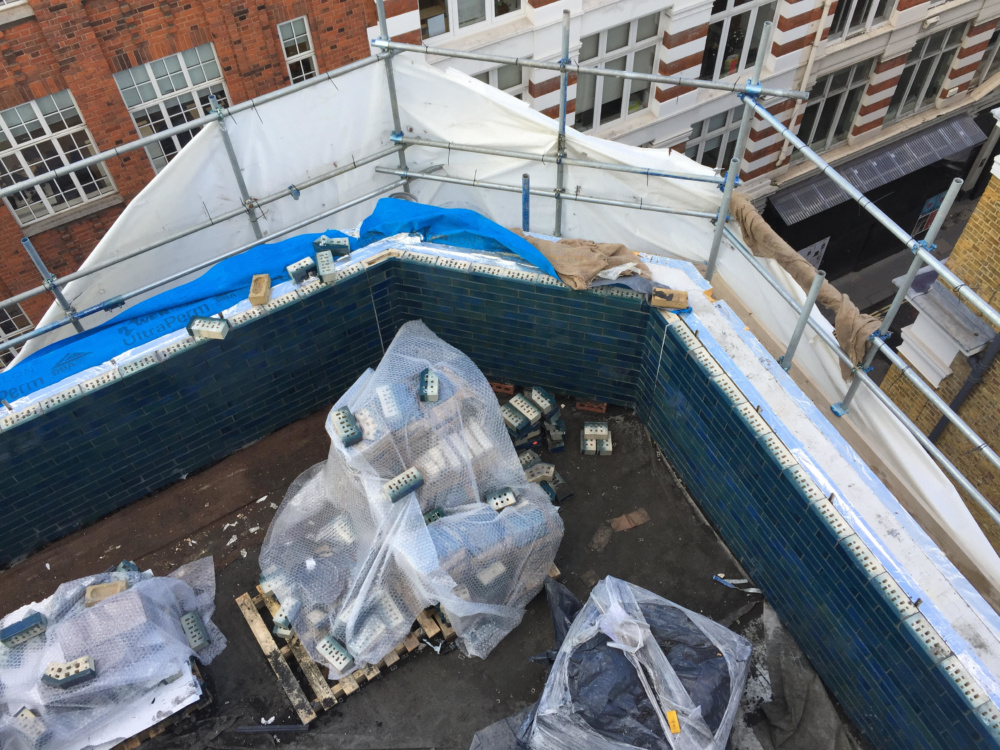 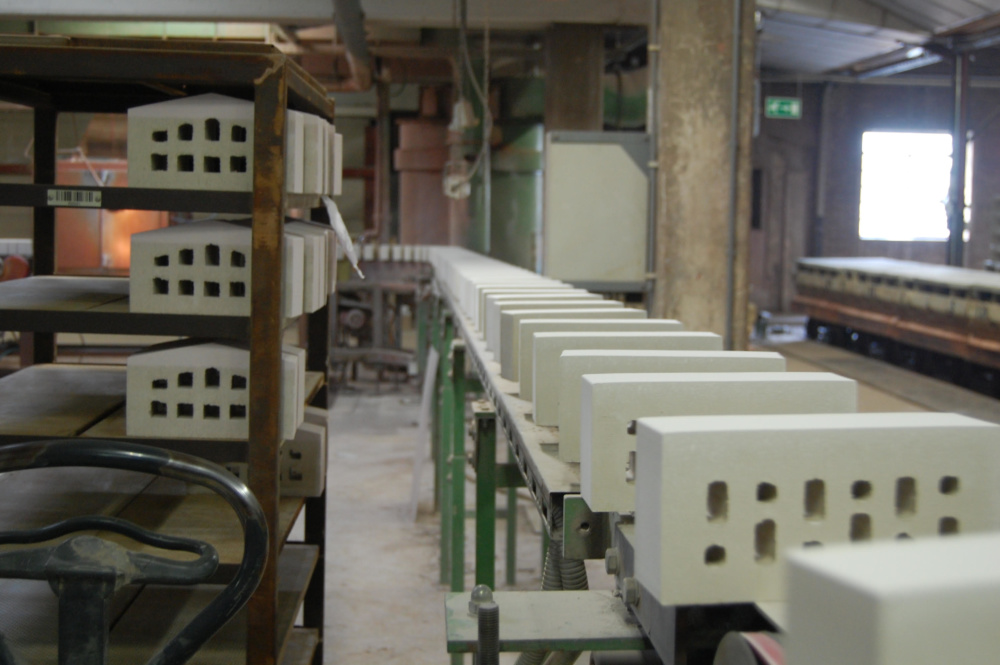 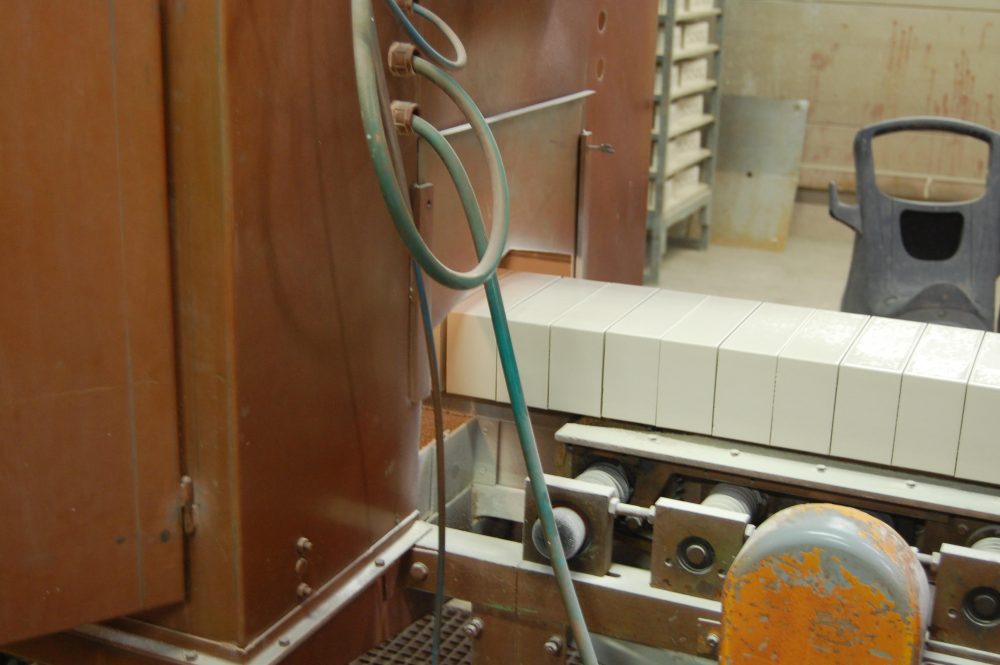 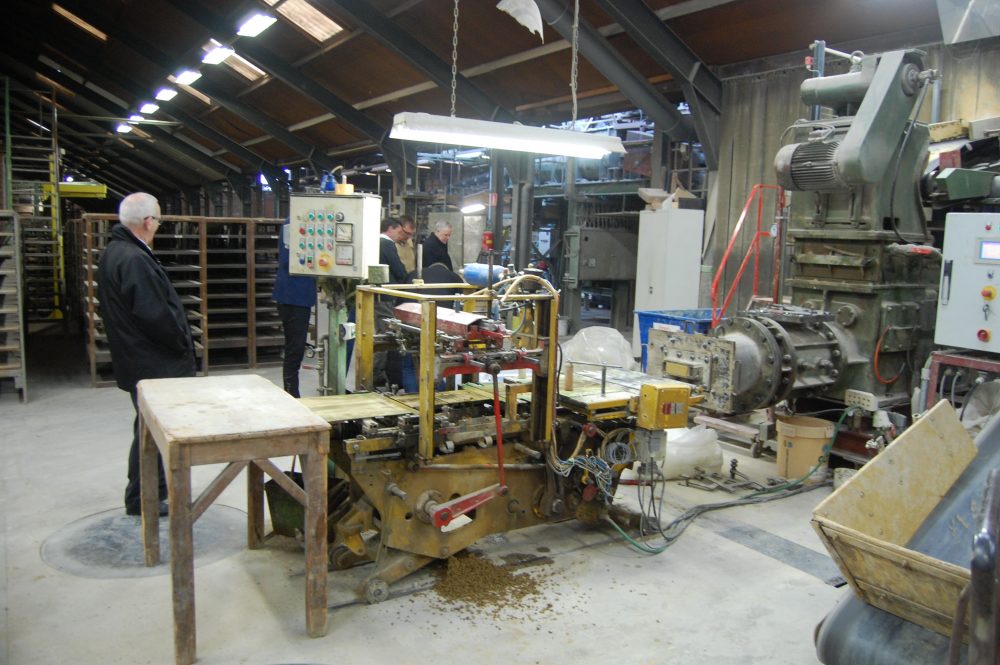 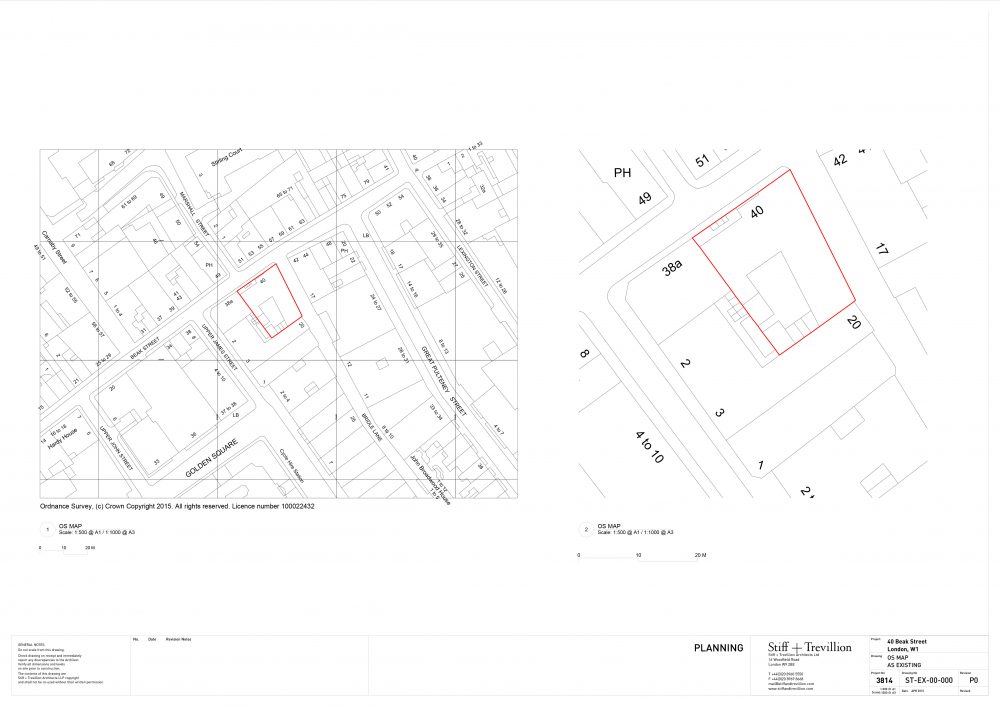 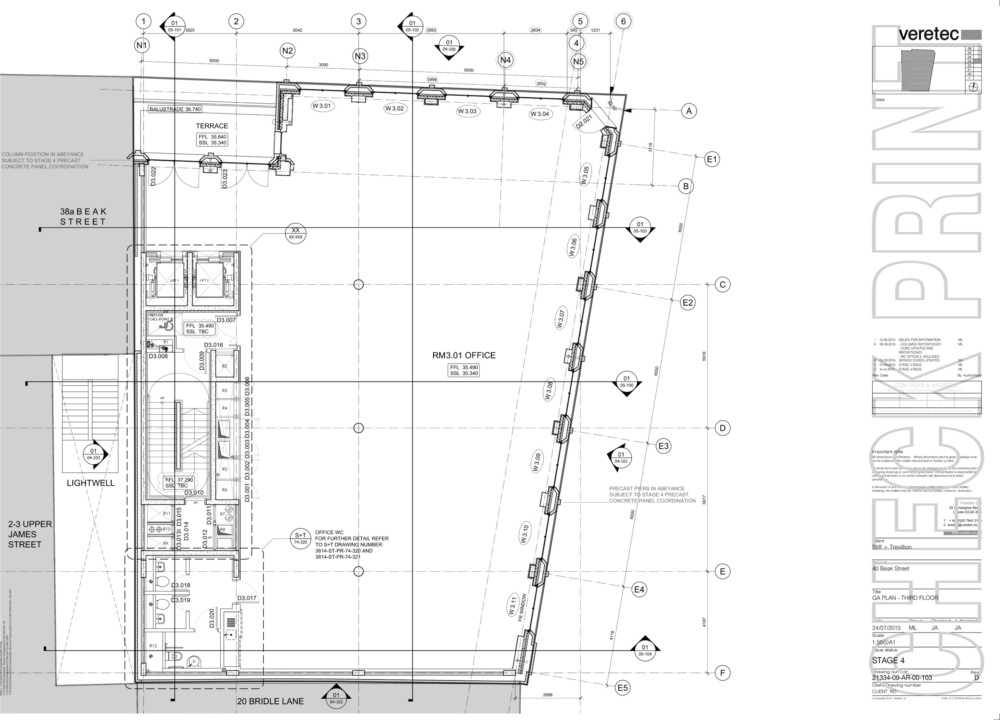 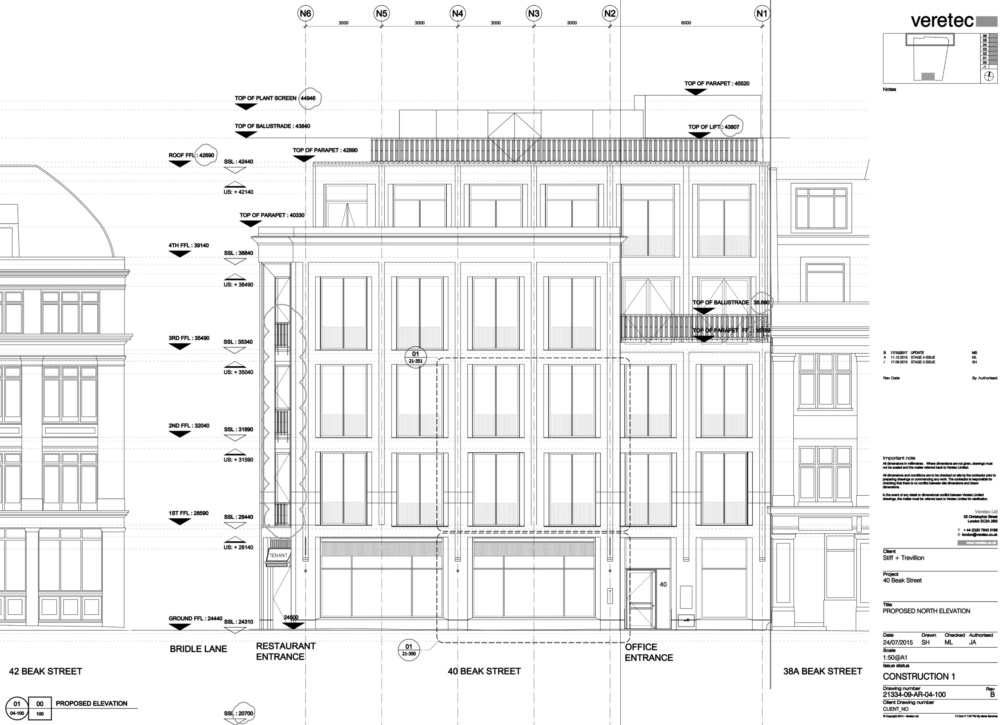 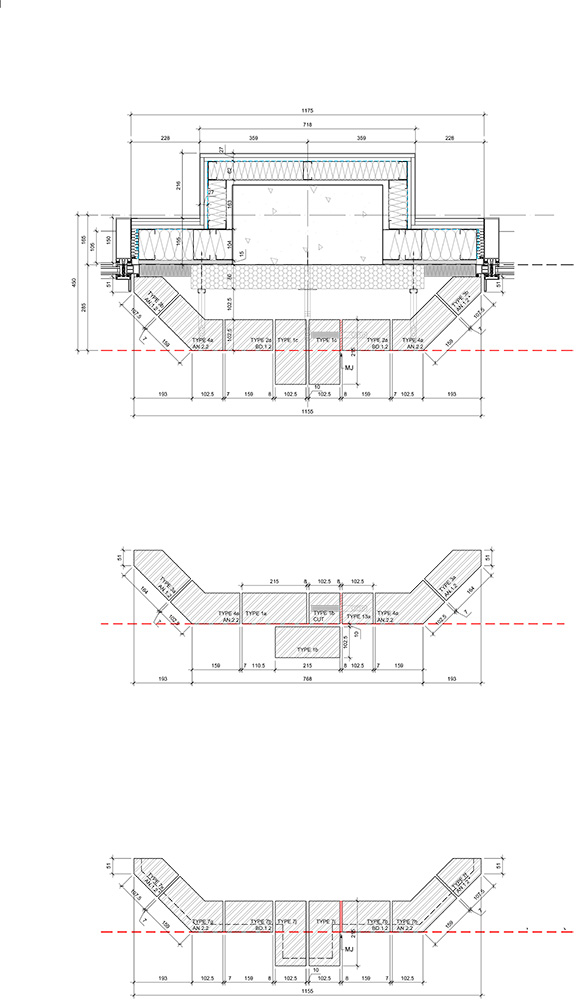 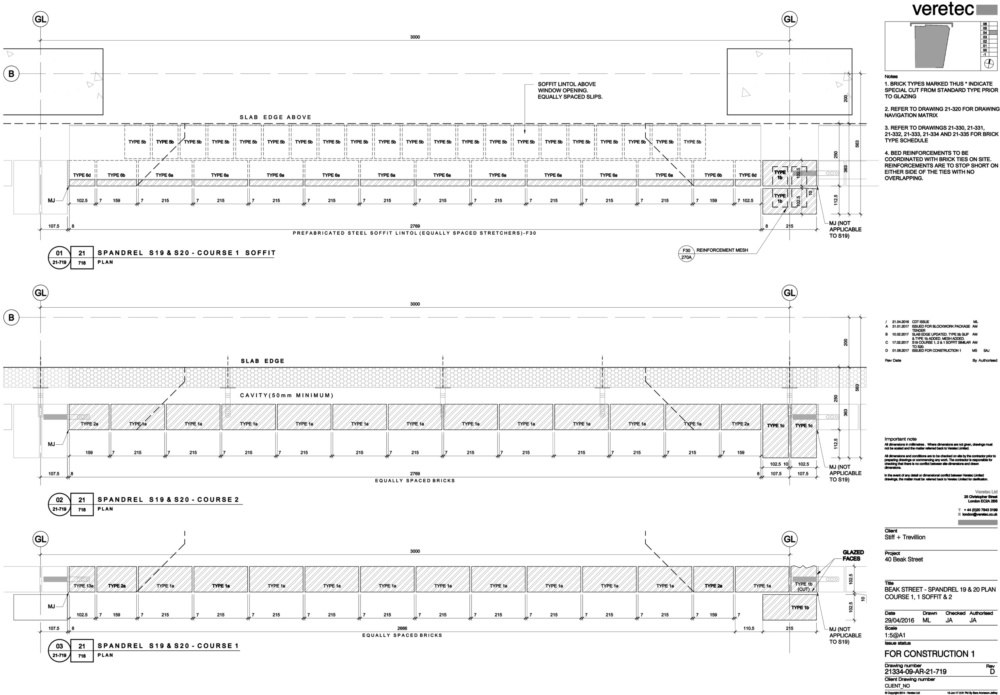 <
►
>
The massing and pattern of fenestration were designed to relate to the Georgian and Victorian surroundings. (Courtesy Nicholas Worley/Stiff + Trevillion)

At the inception of the design strategy, Stiff + Trevillion determined that a heavyweight building with a brick facade was the clear choice for integrating into the surrounding context. Soho, like much of London’s West End, is composed of Georgian and Victorian architecture of low to medium-height, laid out over a narrow network of streets. After setting the basic pattern of fenestration—nearly full height, double-fixed windows spaced evenly—the team dived into certain facade details such as the inclusion of projecting piers approximately every ten feet to conceal movement joints and further the verticality of the overall mass.

According to Stiff + Trevillion, the design team “initially anticipated that the facade would be constructed using precast modules clad with glazed brick slips” due to the degree of repetition found in their facade pattern. Ultimately, the inability of the precast units to be fabricated within the predetermined cost constraints led the firm to incorporate hand laid bricks into their design.

For the fabrication of the facade, the firm looked across the North Sea to St. Joris, a glazing specialist based out of Beesel in the southeastern corner of the Netherlands. The bricks, all roughly measuring 8.5 inches by 4 inches by 2.5 inches, were harvested in the centuries-old clay pits of the nearby Westerwald mountain range. The clay deposits found in this region are noted for their density of minerals, including quartz, illite, and kaolinite, providing a high threshold for firing stability, a useful trait when baked at temperatures bordering 1200 degrees Celsius.

In total, St. Joris produced 100 special brick formats, a result of differing shapes and variations on which face the brick was hand glazed. Glazing for the project consists of two colors: a dark blue at the base of the building (handy for concealing grime associated with street level commotion) which brightens to a lighter blue-green moving upward. The bricks are arranged according to a stretcher bond layout, exposing the longer face of each brick on both the facade and interior spaces.

“The facade was constructed with the brickwork acting as a rainscreen, and using secondary steel framing provided by Ancon Building Products as the inner leaf, faced in cementitious board,” said Stiff + Trevillion Director Lance Routh. “The bricks are fastened to the frame by a course of stainless steel shelf angles that run continuously at every floor level.” Between every brick course the contractor applied an approximately 1/4-inch application of black mortar to blend with the darker hue of the glazing.

Where the design breaks away from its brick-and-mortar context is with unique corner window surrounds and soffits designed by British artist Lee Simmons. Composed of cast aluminum, the lustrous asymmetrical detail shifts away from the relative formality of the brick-faced construction, while falling in line with the more exuberant Victorian architectural details found throughout Soho. This secondary facade element is fitted to the “inner leaf” via armatures extending through the brick curtain, and sealed with a breather membrane and EPDM.

The fit-out of the interior, which features a double-height space with a mezzanine deck, is expected to be complete at the beginning of 2019.