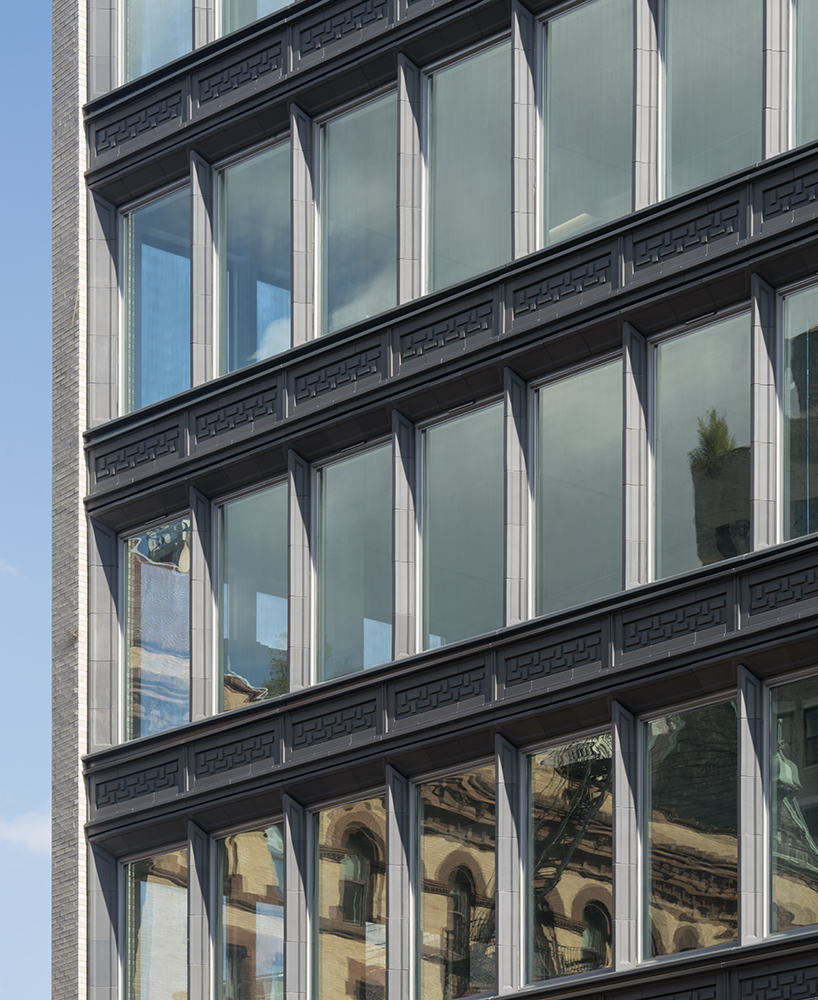 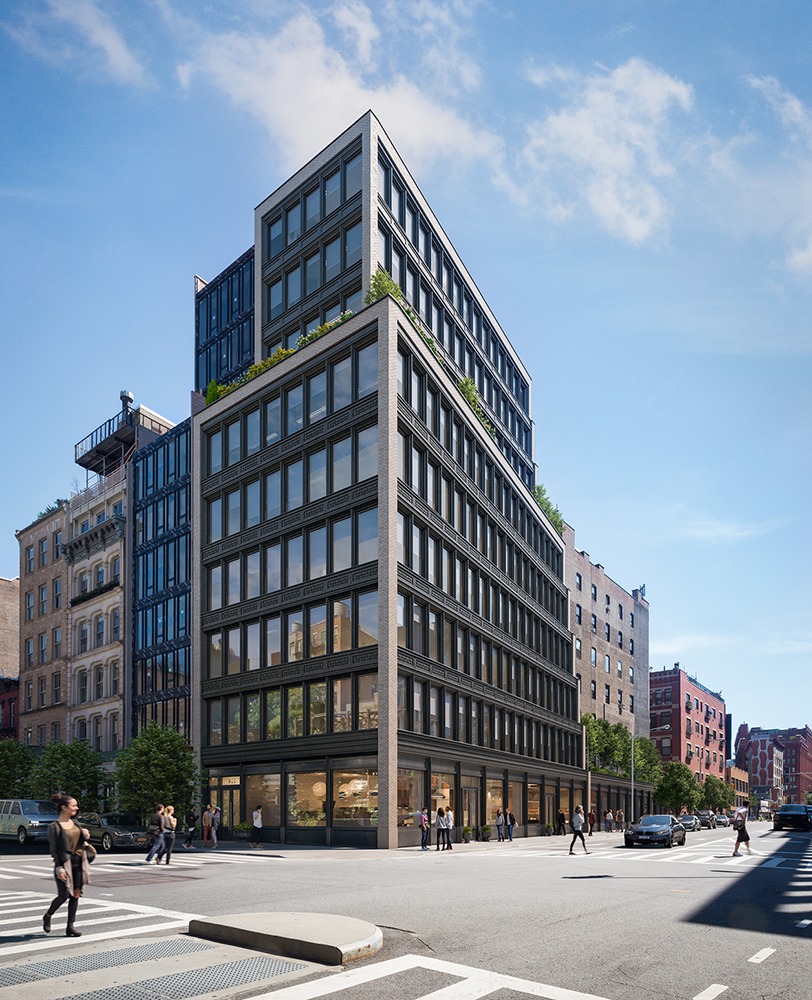 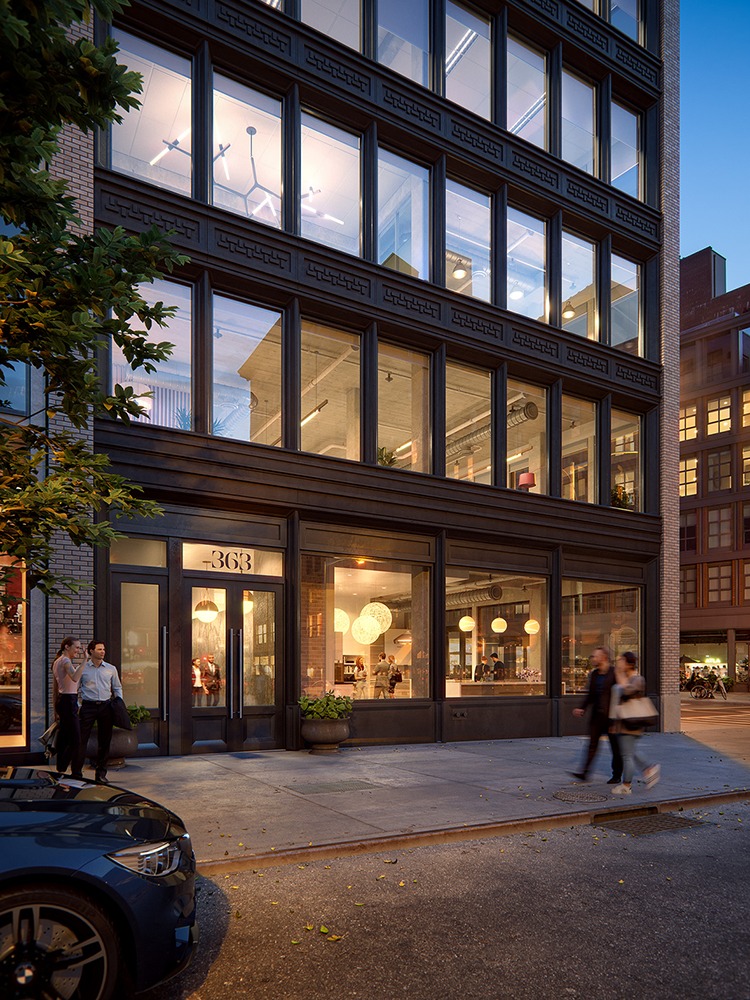 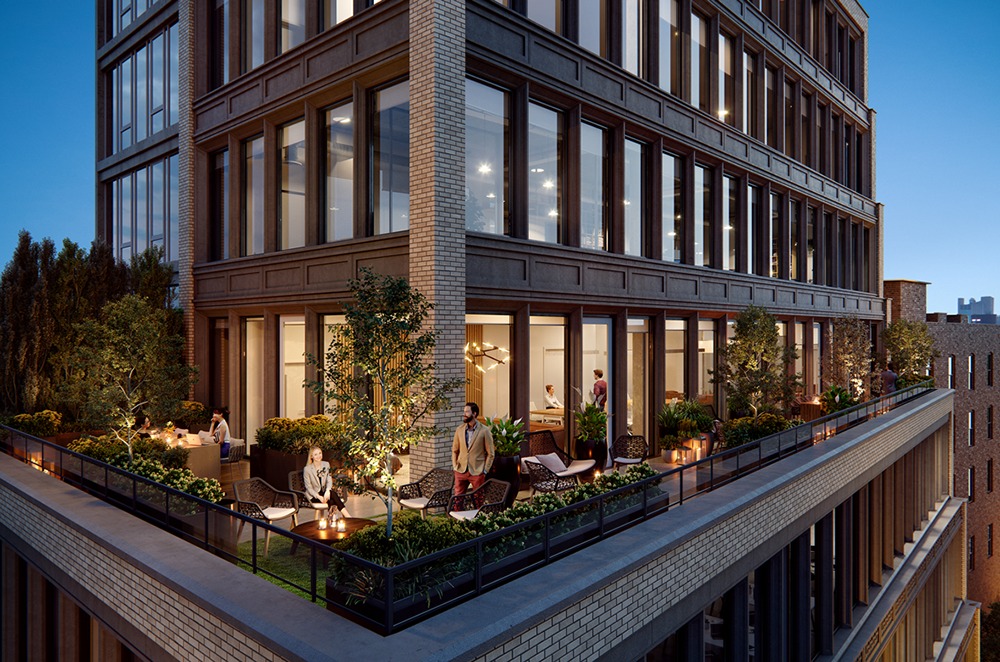 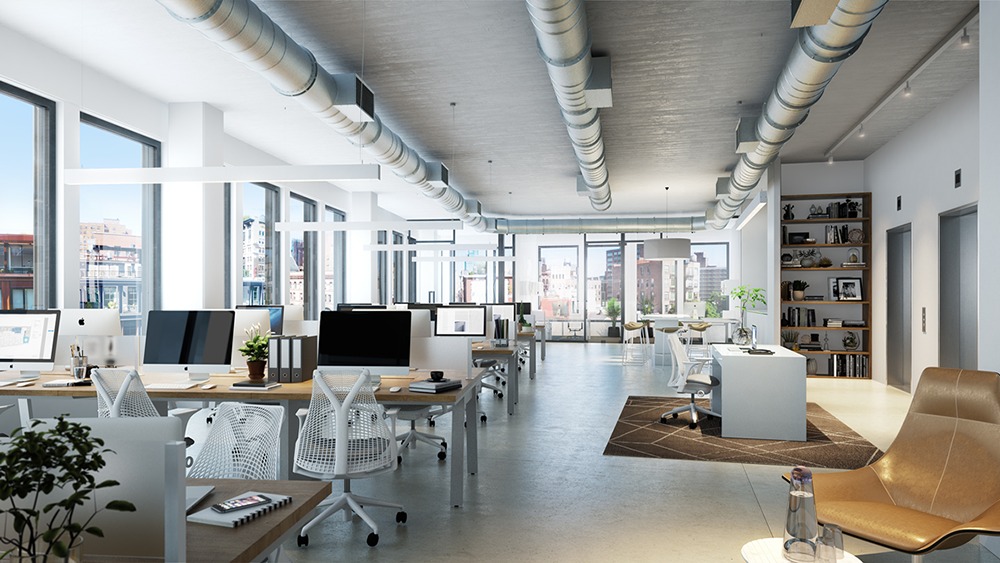 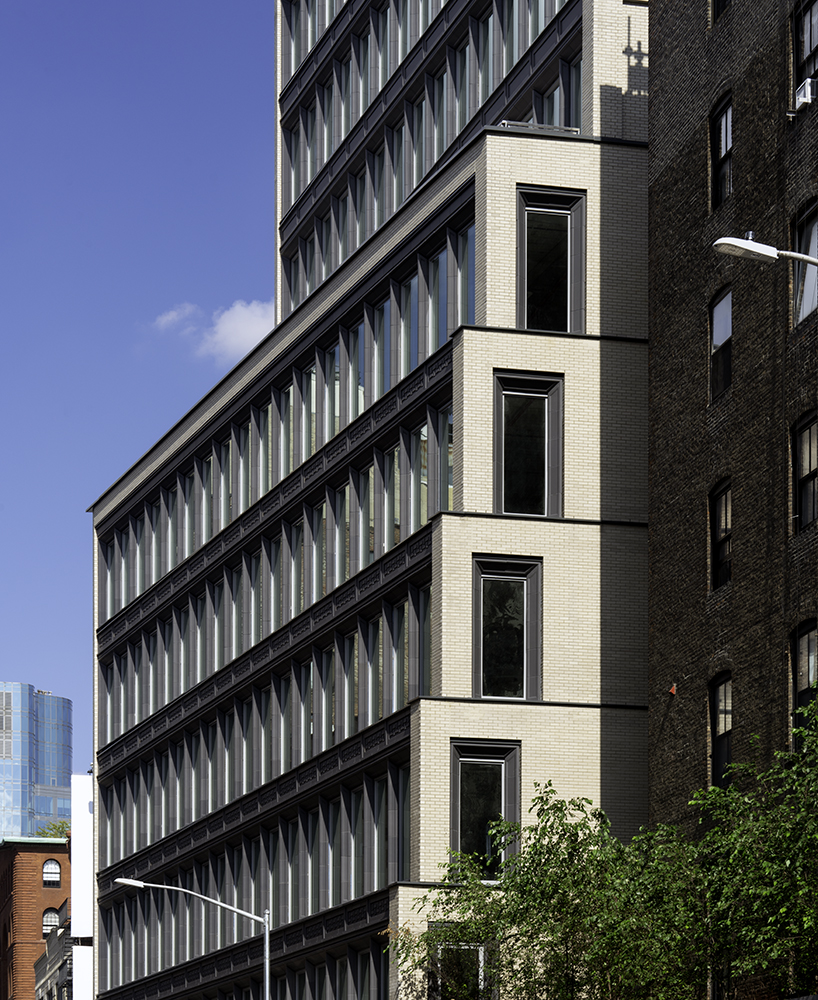 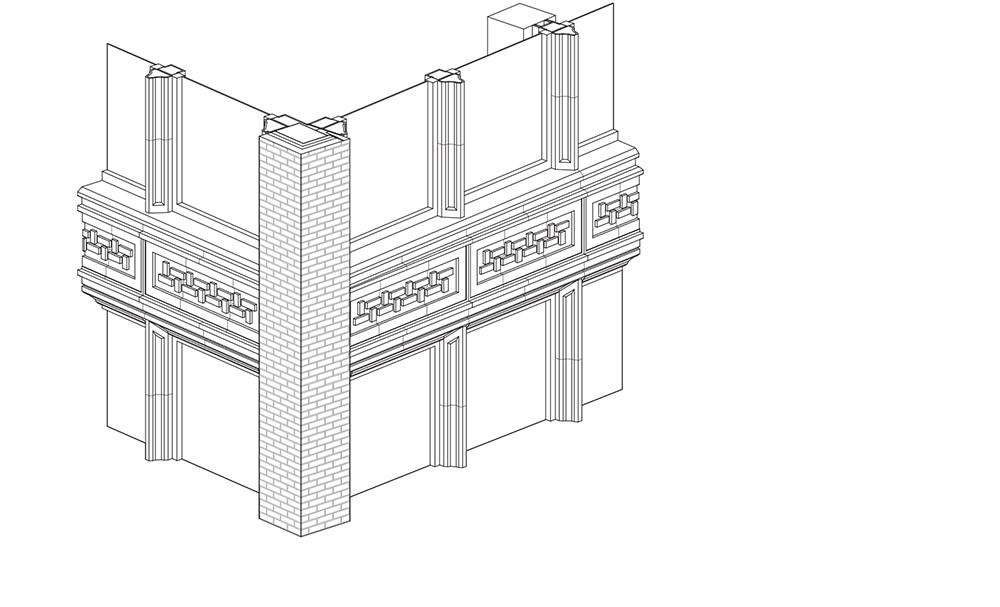 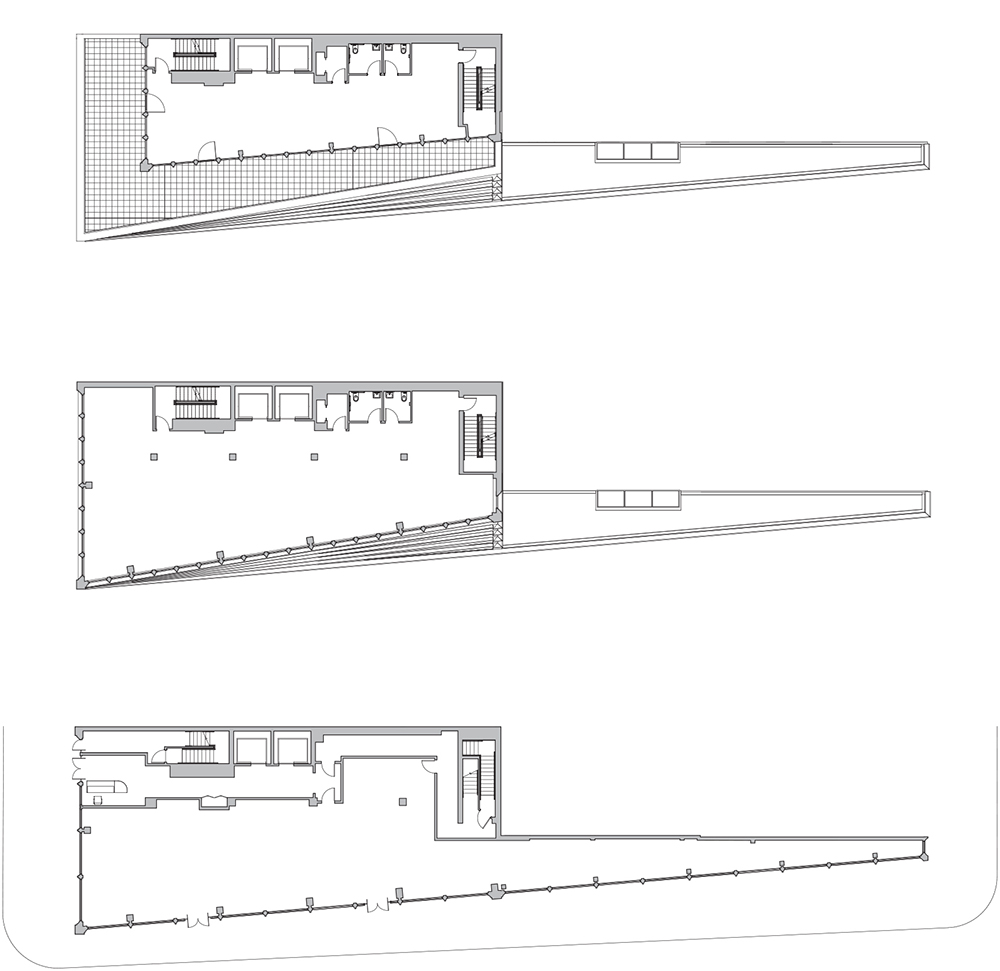 <
►
>
Designed by the firm and crafted by Buffalo’s Boston Valley Terra Cotta (BVTC), the geometric pattern of the terra-cotta reliefs was conceived by the design team as an abstraction of neighboring Classical and Richardsonian Romanesque detailing. (Courtesy Jimi Billingsley/Morris Adjmi Architects)

Morris Adjmi Architects has just completed its wedge-shaped 363 Lafayette mixed-use development in New York City. The project is located in the heart of the NoHo Historic District, a context known for its mid-rise store-and-loft buildings clad in detailed cast iron and stone.

363 Lafayette’s site is prominent, with three visible elevations to the north, south, and west. The ground floor of the building is dedicated to commercial space and extends from Great Jones to Bond Street. Due to zoning and site constraints, the massing of the west facade is set back, with eight floors of office space rising midway through the elevation.

The development’s facade is defined by horizontal and vertical bands of white brick, produced by Belden/Tristate Brick, which frame a charcoal-colored terra-cotta curtain wall. For the color scheme and materiality of 363 Lafayette, Morris Adjmi reinterpreted the area’s historically narrow terracotta mullions, window surrounds, and brick piers, into a much wider layout. Designed by the firm and crafted by Buffalo’s Boston Valley Terra Cotta (BVTC), the geometric pattern of the terra-cotta reliefs was conceived by the design team as an abstraction of neighboring Classical and Richardsonian Romanesque detailing.

The custom-made terra-cotta rainscreen was installed on BVTC’s TerraClad clip system that attaches to a perimeter concrete beam and a medium-gauge framing wall. A series of gaskets and isolators allow the system to adjust to thermal expansion while reducing wind-induced vibration. Elongated rectangular windows, fabricated by TriStar with Win-Vent frames and Vitro Glass, are placed between chamfered terra-cotta mullions.

Why does the building twist? Lafayette Street used to proceed north from Great Jones Street until the end of the 19th century when the street was excavated from the IRT subway. The excavation of the street led to the creation of odd-shaped sites, such as 363 Lafayette. According to the design team, “the building’s twist serves to reflect the cut of the street and to architecturally engage the setback with the lower portion of the building.”