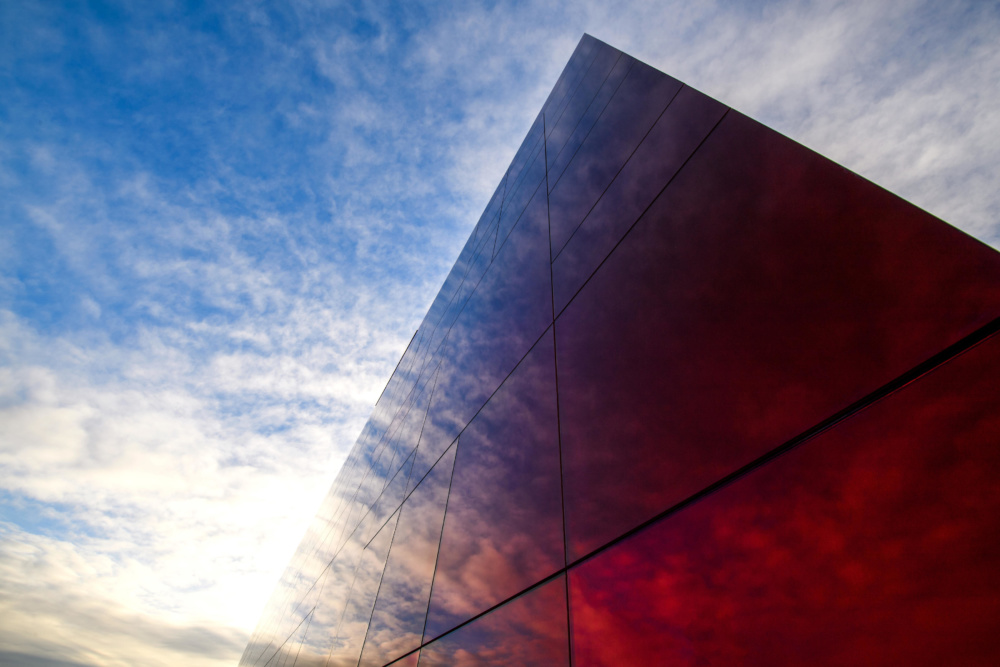 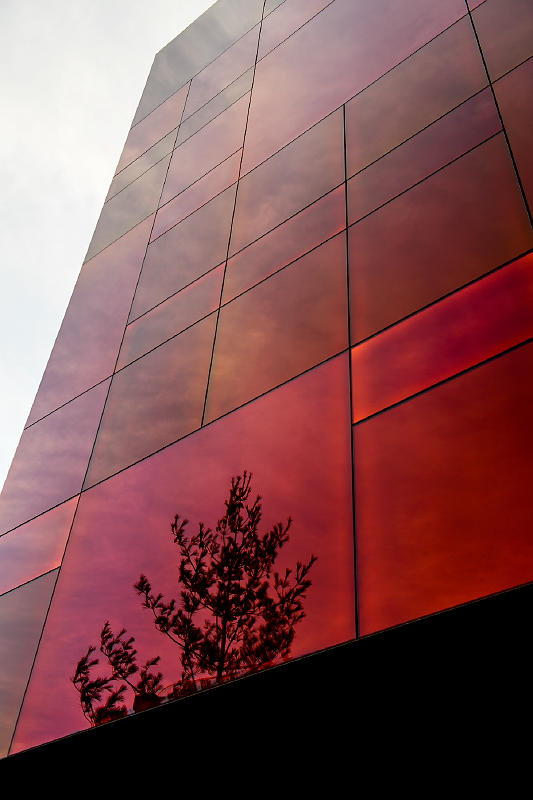 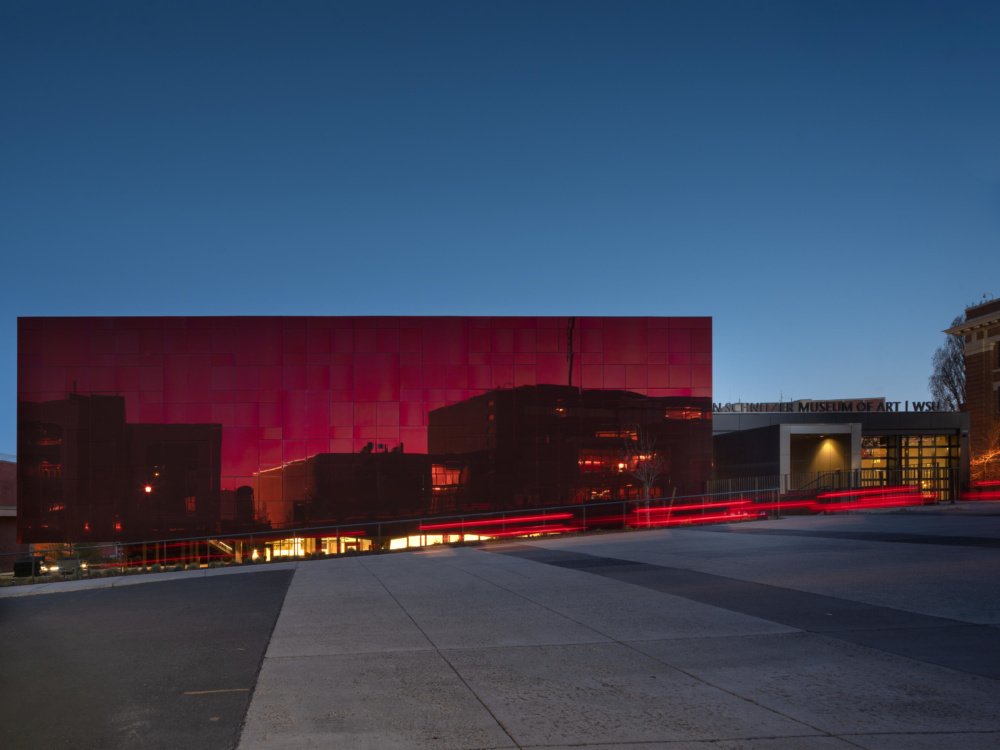 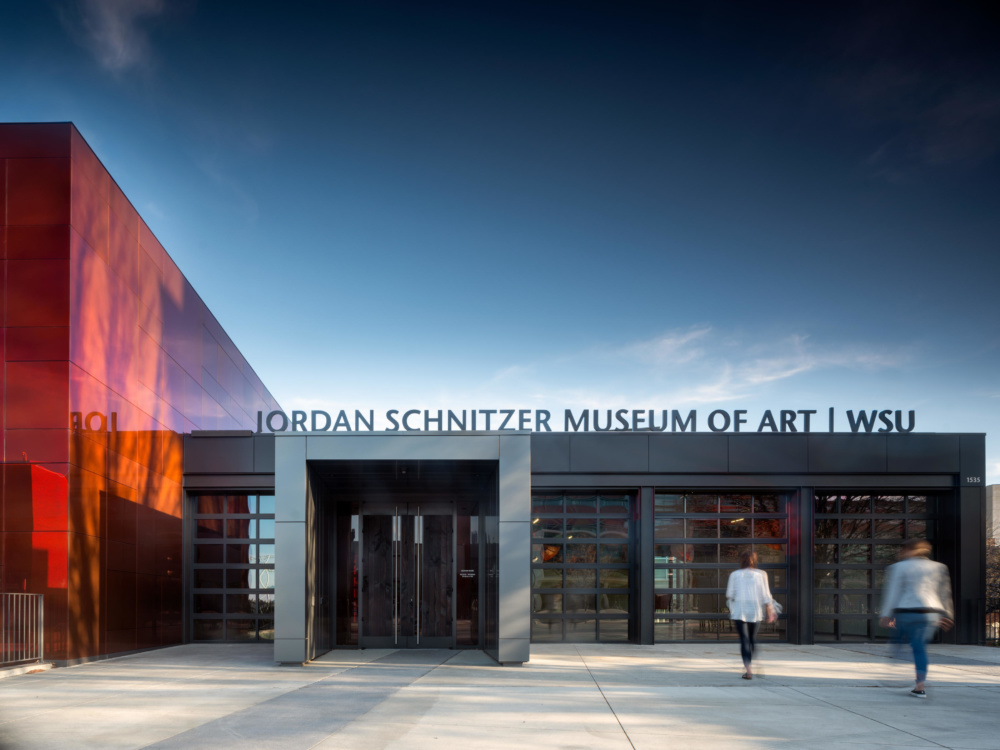 <
►
>
The Jordan Schnitzer Museum at Washington State University opened in 2018 and was designed by Olson Kundig. (Nic Lehoux)

With a permanent art collection of approximately 3,500 pieces hailing from the 20th and 21st centuries, the Jordan Schnitzer Museum of Art at Washington State University is arguably the most prestigious curatorial institution in Pullman, Washington, and joins a string of art museums founded by the Schnitzer family across the Pacific Northwest. The project opened in 2018 and was designed by Seattle’s Olson Kundig, who stamped their presence within the campus with a bold crimson facade of mirrored glass panels.

The museum consists of two volumes encompassing a total of 16,000-square-feet. Visitors arrive through an entry built of glass-and-metal casement windows that can be opened in a similar fashion to a garage door. The primary glass volume houses the museum’s gallery spaces and is lifted off the ground by an arcade of pilotis and, in some respects, resembles a hovering cube.

“A key design challenge was balancing the museum’s dual needs for transparency and security,” said Olson Kundig design principal Jim Olson. “The answer is a design that consists of two distinct parts: The first serves as an informal entry to the museum and the second space, the “crimson cube,” is a climate-controlled space that houses the formal galleries and is enveloped by the crimson facade.”

Steinfort Glas, a manufacturer based in the Netherlands, produced the mirrored glass facade panels in three different dimensions which function as a relatively conventional rainscreen. The facade’s composition achieves a patterned effect through alternating courses of square panels, measuring 3′-4″ by 3′-6″, and rectangular panels, measuring 3′-4″ by 1′-8″. The horizontality of each elevation is broken up by steps of larger square panels that are roughly double in size at 6′-6″ by 7′-0″.

“I wanted the museum to have a highly reflective facade as a means of weaving it into its context,” continued Olson. “While appearing rather solid and uniform from afar, the reflective crimson cube rewards viewers upon closer inspection, much like the artworks housed within.” The effect is achieved through the placement of colored interlayer glass between the mirrored glass panels.

The installation of the rainscreen was fairly straightforward and was handled by Hoffman Construction Company, a contracting firm based in the Pacific Northwest. A mounting clip adheres to the back of each individual glass panel, which is subsequently attached to an aluminum rainscreen system produced by Hunter Douglas. The rainscreen system allowed for minor adjustments on site via screws set through the panel joints.