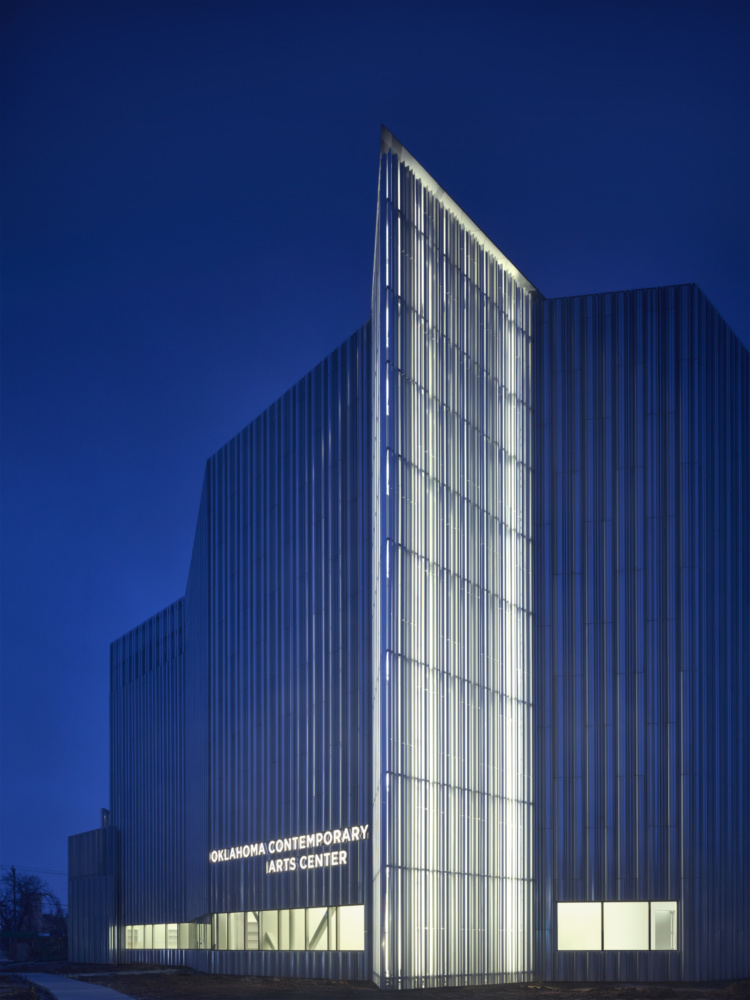 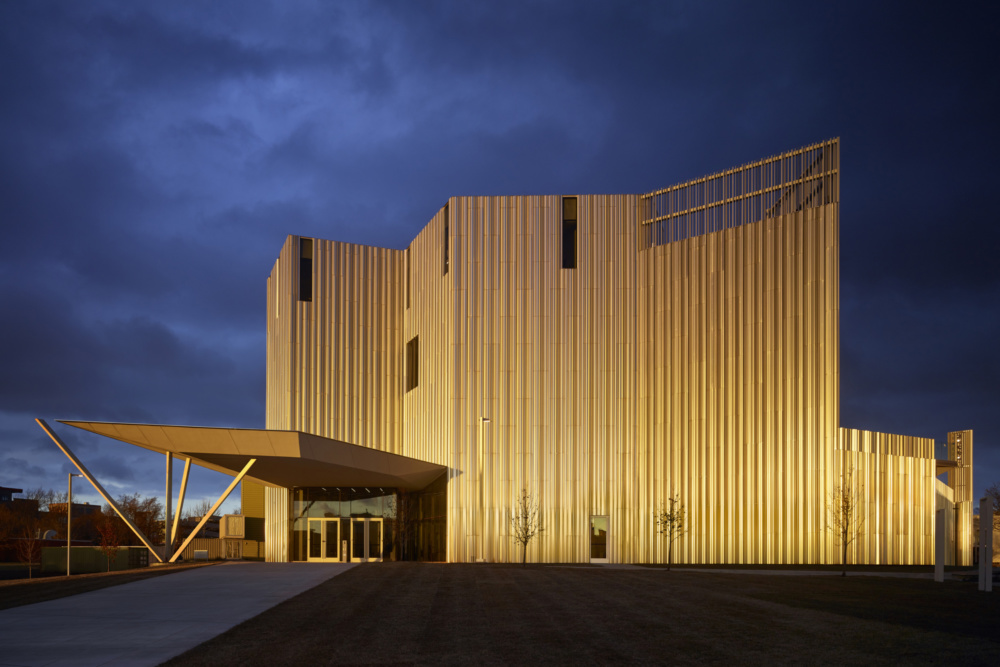 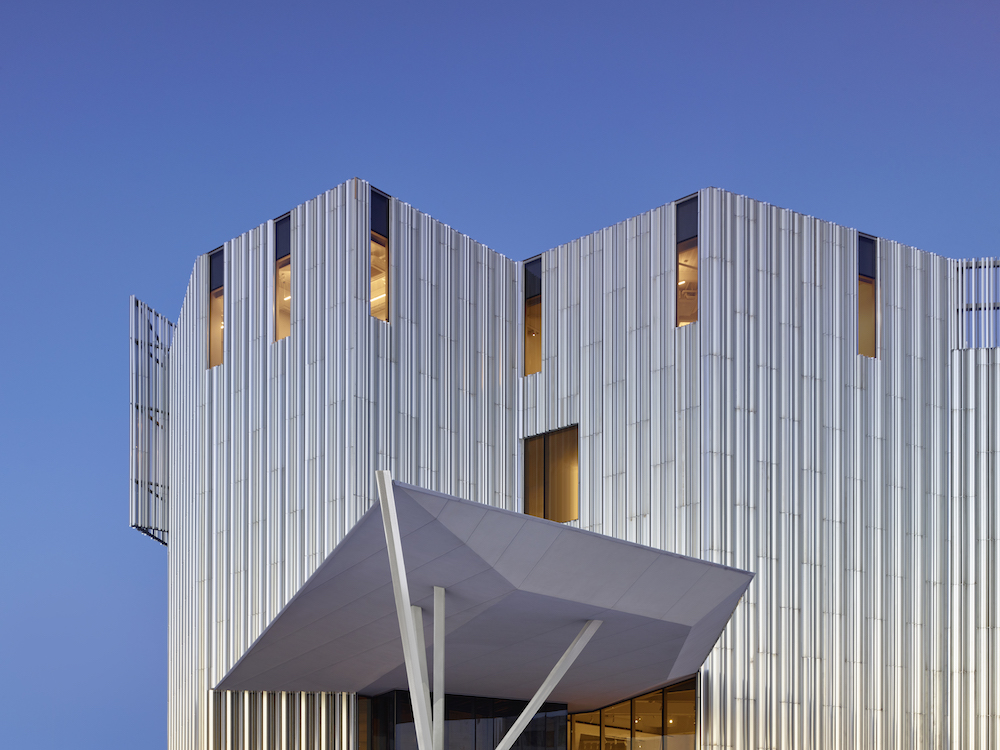 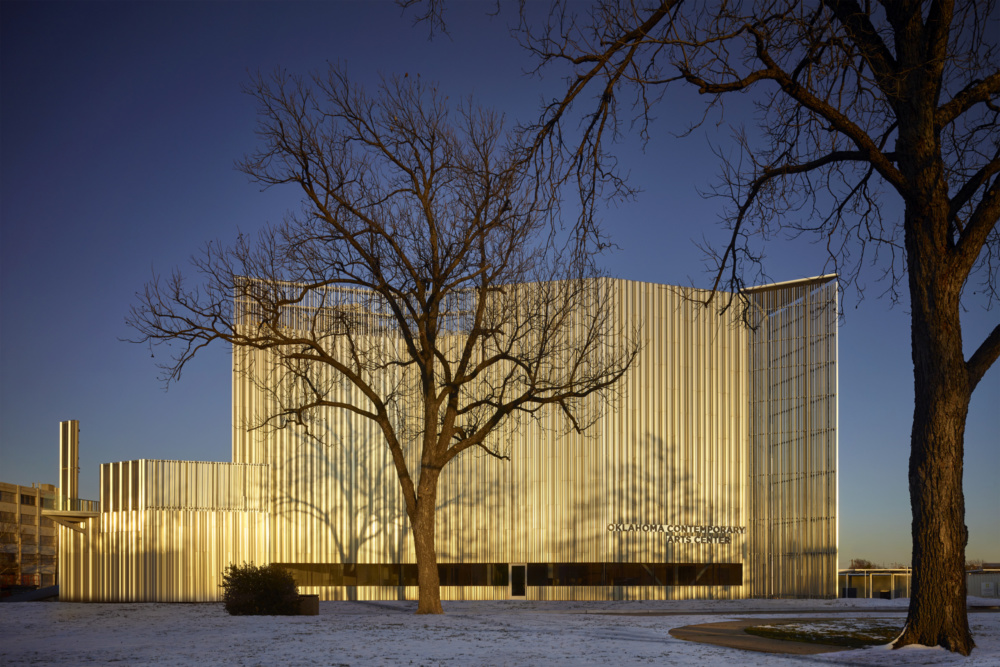 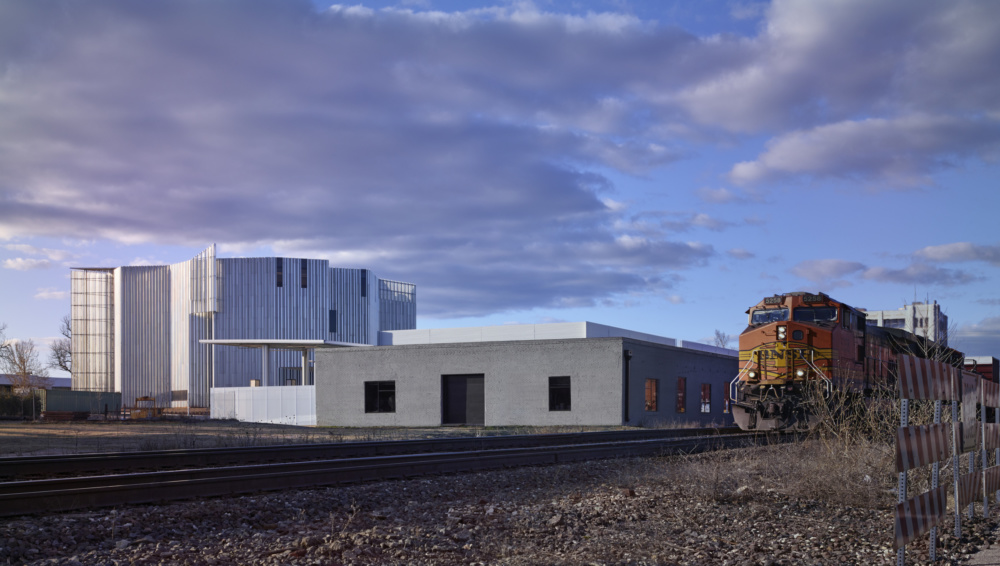 <
►
>
The vertical, four-story Lantern is lit each evening, drawing the eye of passersby from Broadway Avenue. The Lantern is named for the memory of Ann Alspaugh, a leading Oklahoma philanthropist. (Scott McDonald/Gray City Studios)

The same vast skies that once inspired Rodgers and Hammerstein to write the classic musical OKLAHOMA! has now guided the design and materiality of the new Rand Elliott-designed Oklahoma Contemporary Art Center. Changing in color with the dramatic weather of the wind-blown Sooner State, Oklahoma City’s newest cultural building gradates from soft golds through rich pinks and navy blues. As the Oklahoma City-based Elliott explained to AN, this is due to its bespoke facade system and angular form. “We created this with individual fins in nine angular variations. The reason for that was to create opportunities for the sun to react differently.” Using parametric modeling and rendering software to iterate countless configurations, Elliot came to a seemingly random pattern of the nine fin profiles. Individually, each reflects light slightly differently, but it is in their combinations that a more complex play of shadow and reflection is realized. This works in conjunction with a “bright-dipped” finish which defuses surface reflections, avoiding the highly specular nature of a mirrored finish. This results in the building softly taking on the color of the sky and its surroundings.

These fins, combined with an irregular perimeter, make it difficult to pin down exactly what is the shape, color, and material of the building. In different lighting conditions and from different angles the effects produced by the facade are varied yet subtle. Manufactured from recycled aluminum, the fins utilized a wrapping blind fastening system. The clean lines of the facade are carefully maintained in utilitarian details throughout with drains, exterior light fixtures, and other mechanical systems all hidden or designed directly into the facade. The 1/8th inch aluminum also provides protection from Oklahoma’s brutal storms, which often produce large driving hail. The weather also produces an auditory effect with the building. Many mornings, the building can be heard expanding and contracting with the wide night-to-day temperature shifts of the region, a consideration that was accounted for in the careful spacing of each fin. One of Oklahoma Contemporary’s primary goals in building a new 53,916-square-foot museum was to bring contemporary art closer to the heart of the city. Formerly housed at the Oklahoma State Fair Grounds, the 31-year-old institution will use its new 8,000 square feet of galleries for exhibitions, education in the nine classrooms, and performances in a flexible 200-seat theater with an adjoining dance studio.

The building’s angular form also plays a role in these interior spaces. Throughout the entire project, there are few rectangular rooms and few long expanses of wall. Instead, art pieces are often given shorter wall sections all to themselves. The relationship between the art and the building is also being highlighted in the museum’s inaugural show, Bright Golden Haze, a title also inspired by OKLAHOMA!. The show brings together artists working in the medium of light as well as those who make art where light plays a major role. International artist such as James Turrell and Olafur Eliasson will be shown with more local artists such as Yatika Fields. At nearly 10 years in the making, the project is an obsessive look at how light can be manipulated through geometry and surface. Elliott’s name for the building is “Folding Light,” a moniker that references its form, materiality, facade, and overall effect. Speaking of the facade, Elliott’s focus was clear: “It holds the light, it grabs the light, and that’s the intention that the building becomes a part of the atmosphere and the place.”