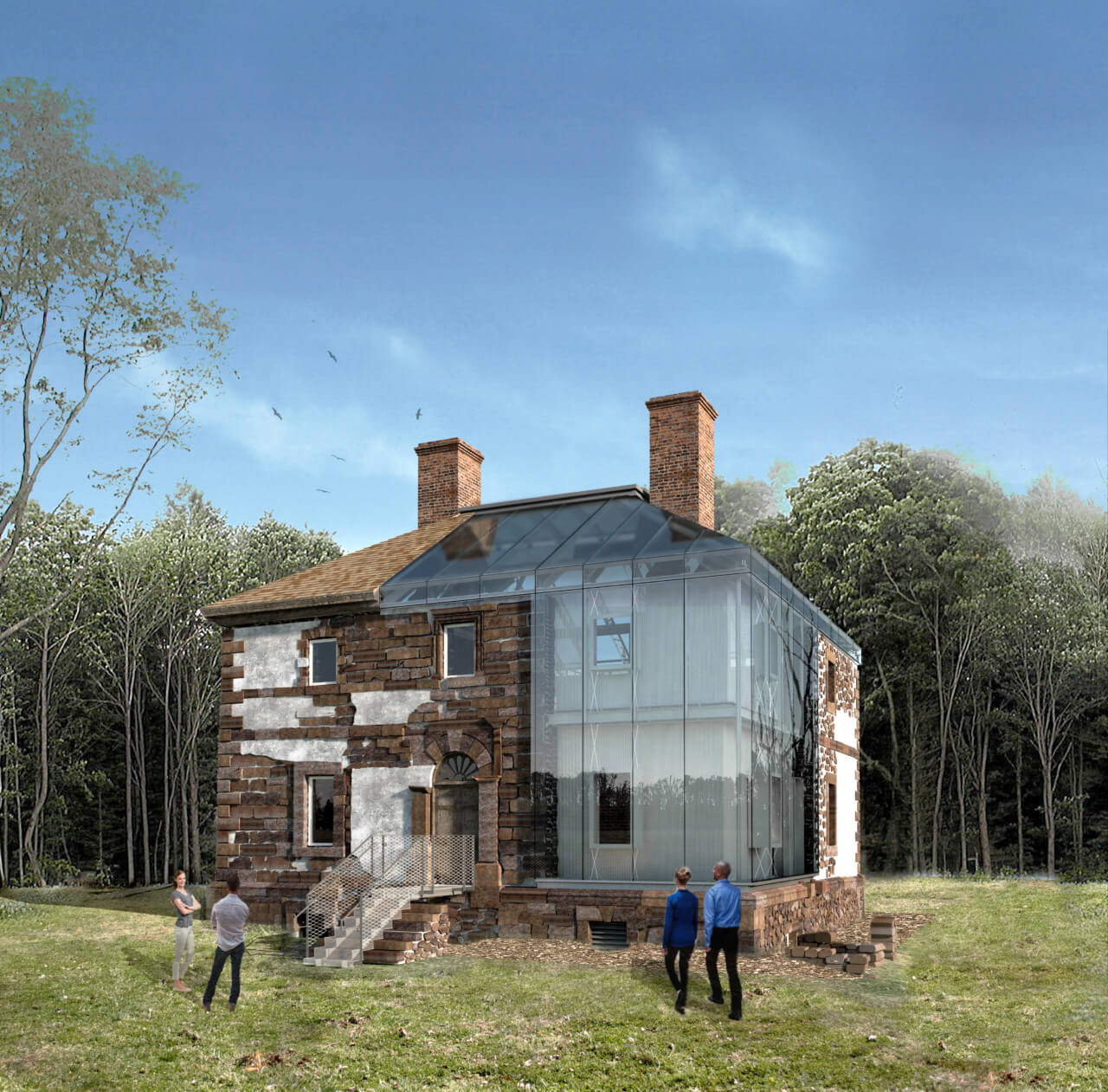 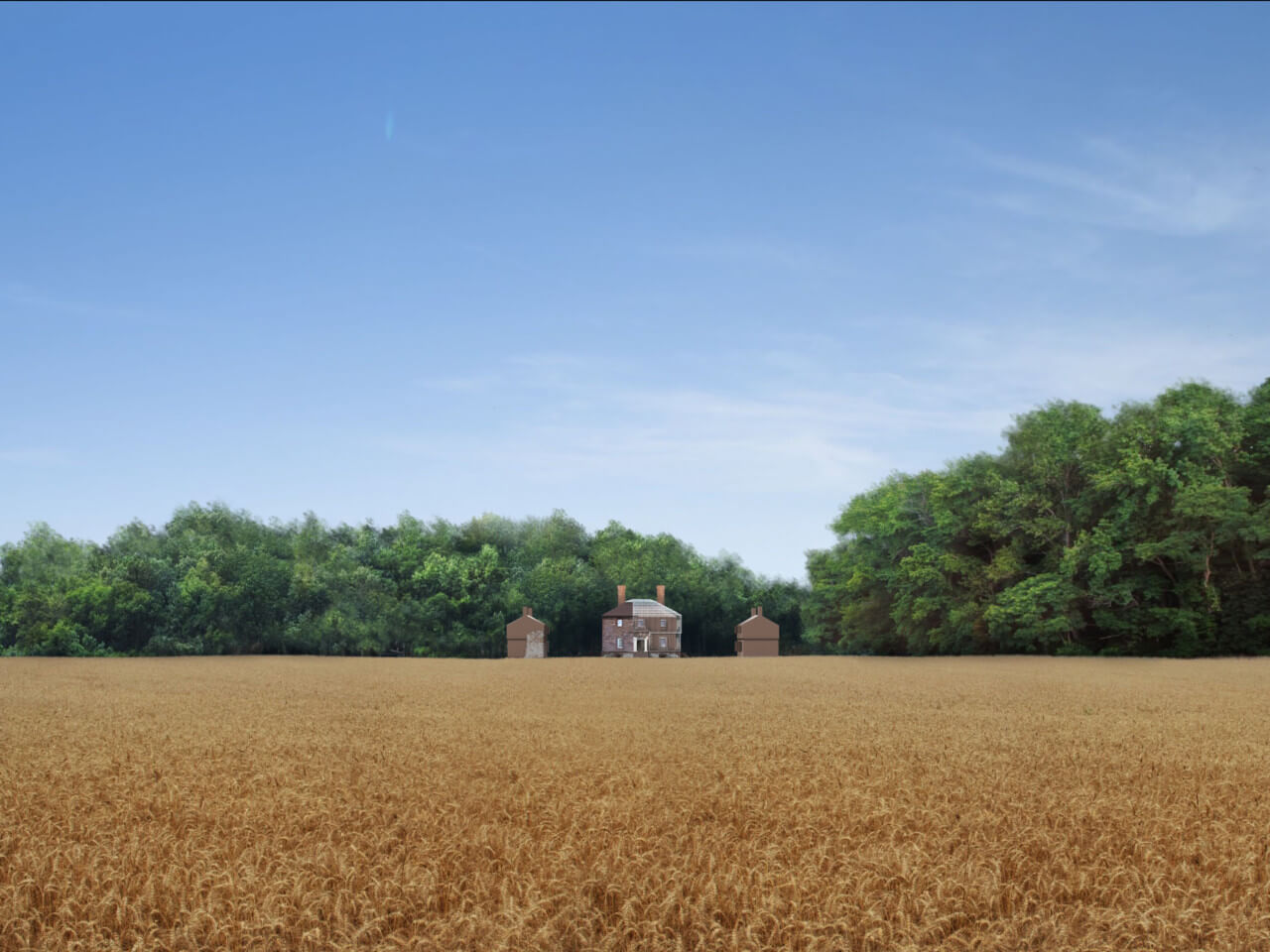 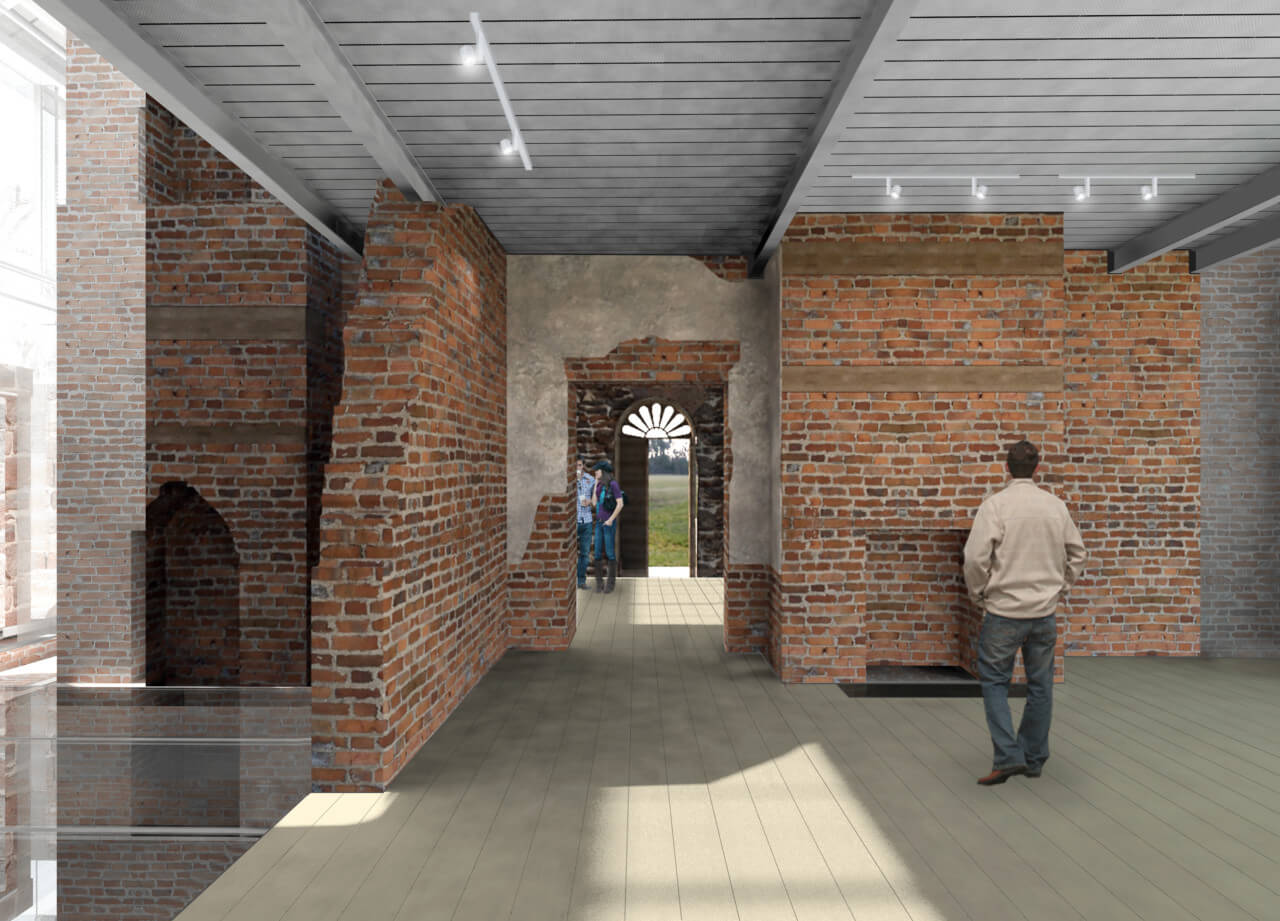 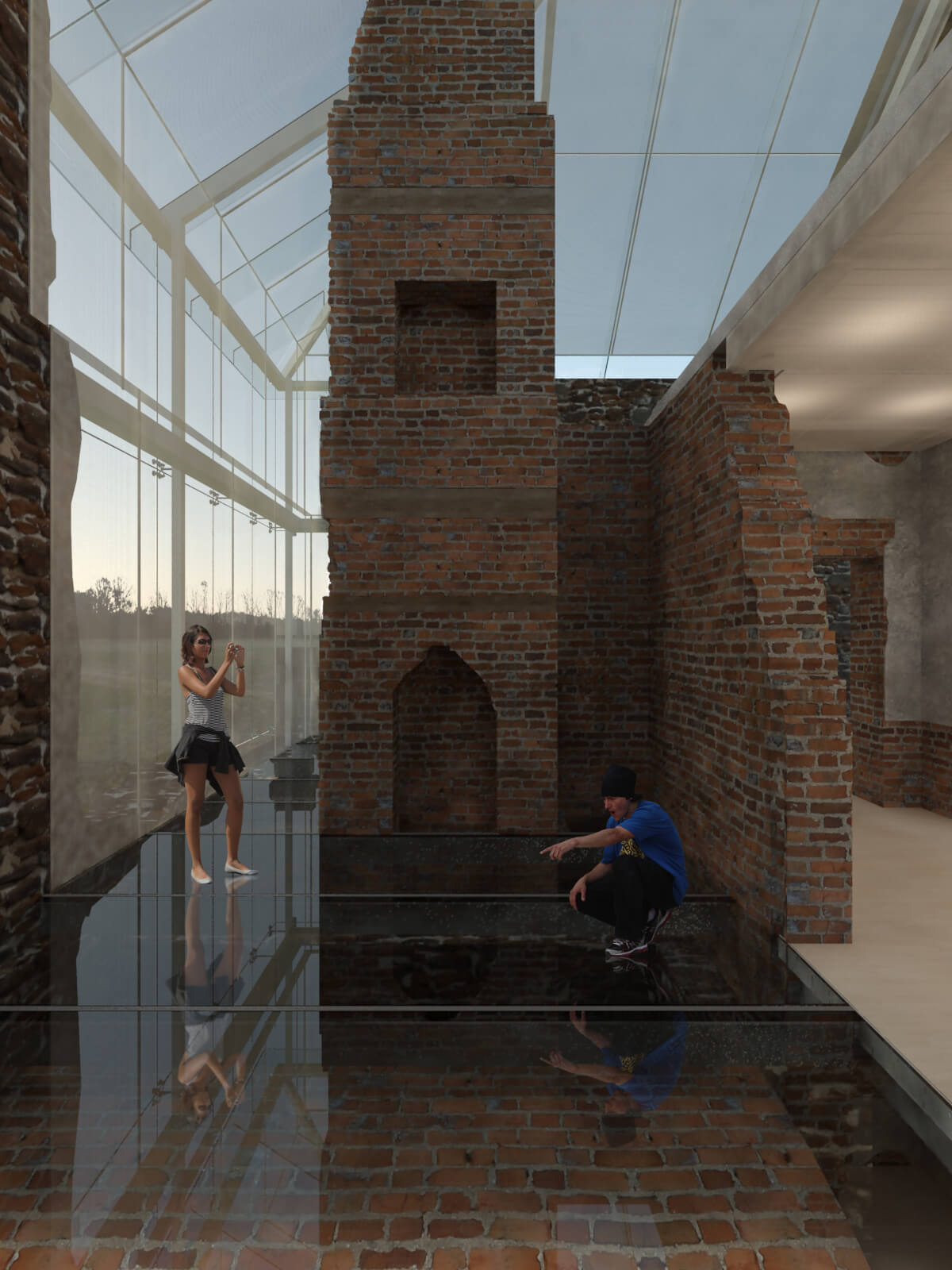 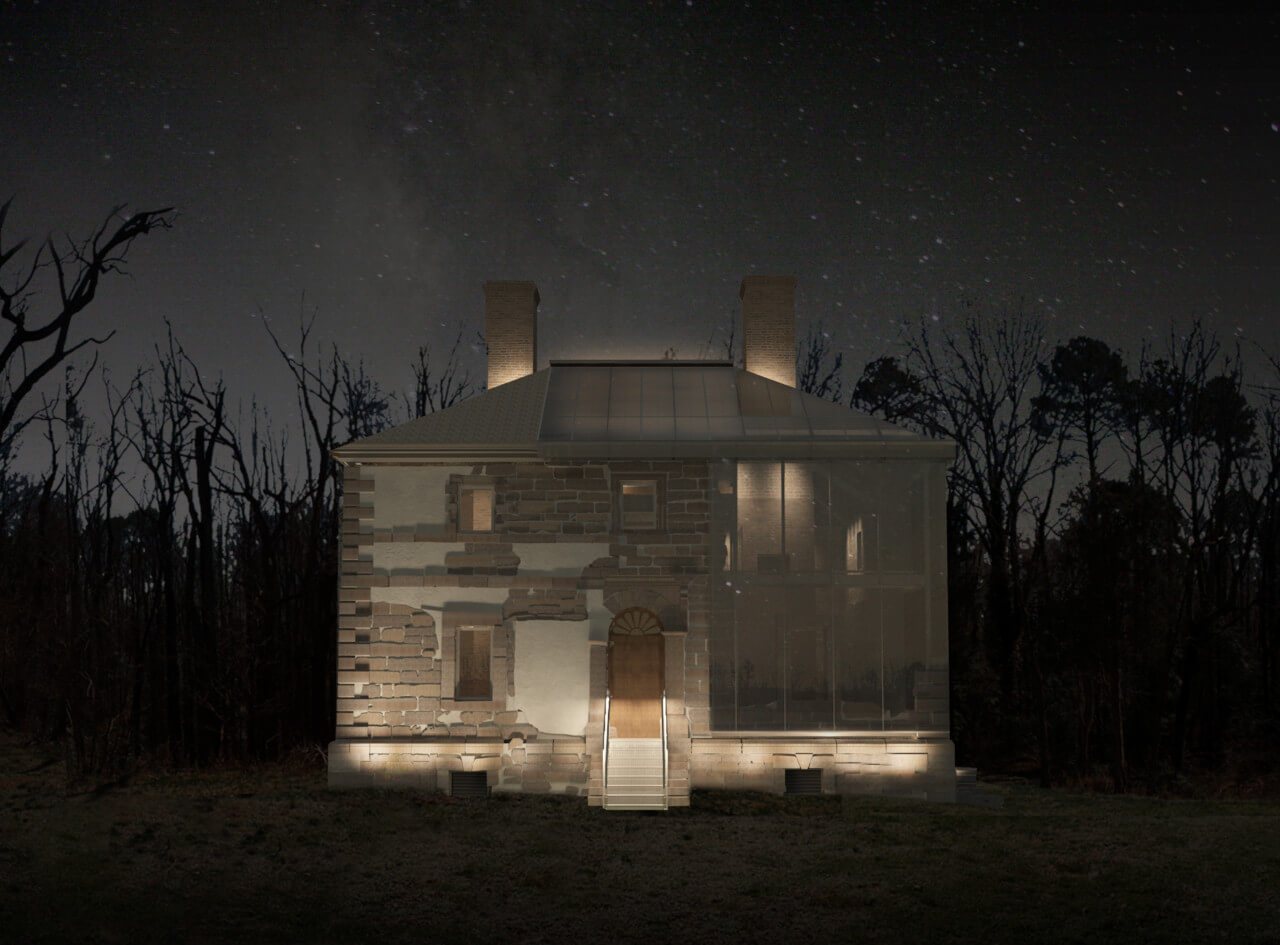 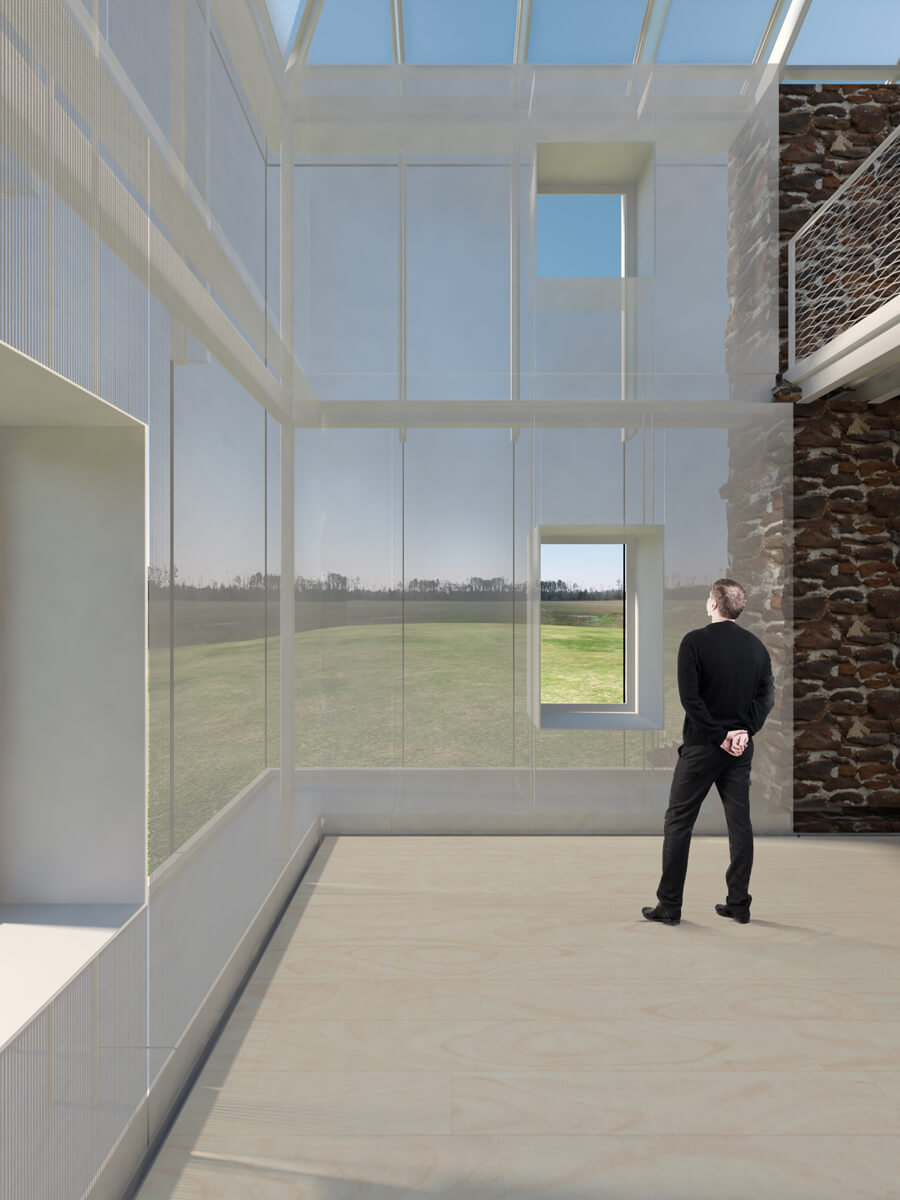 <
►
>
Apart from stabilizing the existing masonry (currently underway), the restoration strategy hinges on a new steel armature capable of supporting a glass roof, enclosure, and even floors. (Courtesy Machado Silvetti)

Historic preservation in the United States has often been cast in absolute terms: Structures and monuments are either subject to campaigns of complete restoration (which may entail partial reconstruction) or maintained as sublime ruins stabilized to withstand the ravages of time. A novel conservation scheme for an 18th-century plantation house on Virginia’s Northern Neck peninsula threads the needle between these approaches.

The Boston firm Machado Silvetti is overseeing the project, which will partially enclose the dilapidated Menokin House in structural glass. “The 500-acre plantation is surrounded by notable other estates in North Neck that have been fully restored,” said Machado Silvetti principal Stephanie Randazzo Dwyer. While those projects followed traditional restoration methods, Dwyer noted that her client, the Menokin Foundation, “went for this innovative approach that uses contemporary materials like glass and steel to represent parts of the ruin that could not be recovered.”

Menokin was the ancestral home of Francis Lightfoot Lee, a signatory of the Declaration of Independence. Lee died heirless in 1797 and the property—a handsome piece of Georgian architecture—passed through the hands of multiple generations of tenant farmers, who left the original details largely intact, though poorly maintained. Still, the house stood tall until the 1960s, when it was severely damaged by a falling tree. The Menokin Foundation, established for the express purpose of restoring the erstwhile home, acquired the site in 1995 and began the arduous process of ruin stabilization. Intending to reopen the grounds as an exhibition center, the group had the idea of rebuilding with glass and brought Machado Silvetti onboard in 2010.

The $7 million project has unfolded slowly, with the stabilization—carried out in collaboration with John Fidler Preservation Technology—ongoing. The work consists of strengthening existing elements, which were analyzed through point cloud scanning, by repairing masonry and shoring up the structure with steel columns. Further segments of the facade are composed of reconstructed stone and rubble found on the site. The remaining void is decked over with a system of structural steel armatures, aluminum extrusions, and cables that mimic the original post-and-beam construction, to which the structural glass will later be fastened.

Although a decision on the contractor and glass manufacturer has yet to be finalized, the present plan developed by facade consultant Eckersley O’Callaghan calls for the use of SGP-laminated single-glazed panels measuring approximately 4 feet-1inch by 19 feet-6 inches and weighing 1,050 pounds each. (The width of the units aligns with those of the panels in the glass roof.) The glass walls will be backed by a fabric scrim layer chosen to approximate the original plaster surfaces and the thickness of the masonry construction.

“This transparent layer is a flame retardant woven fabric that is installed in tension within a custom stainless-steel track at the top and bottom of each floor level,” said Dwyer. “The scrim’s transparent finish not only offers effective glare and sun protection with optimized exterior views but, where it meets up with the original stone walls, its transparency allows one to see the many layers of the rubble wall construction.”

Above the cornice line, the design team intends to rebuild a section of the former hipped roof with wood framing, truss, and shingles and will fill out the remainder with low-E coated double-glazed units that will likely include an embedded honeycomb interlayer as a further shading measure.

“In general, the main challenge in the design of the glass systems on this project was to ensure that they were visually as minimal as possible so that they do not compete visually with the restored ruin,” said Eckersley O’Callaghan associate Karine Charlebois. “For this reason, at the lower level, no structural members are provided along the vertical edges of the glass. At the upper level, some laminated glass fins help control the deflection under wind loads and keep the glass panels as thin as possible.”

If all goes well, the Menokin Exhibition and Conservation Center will open in 2023.