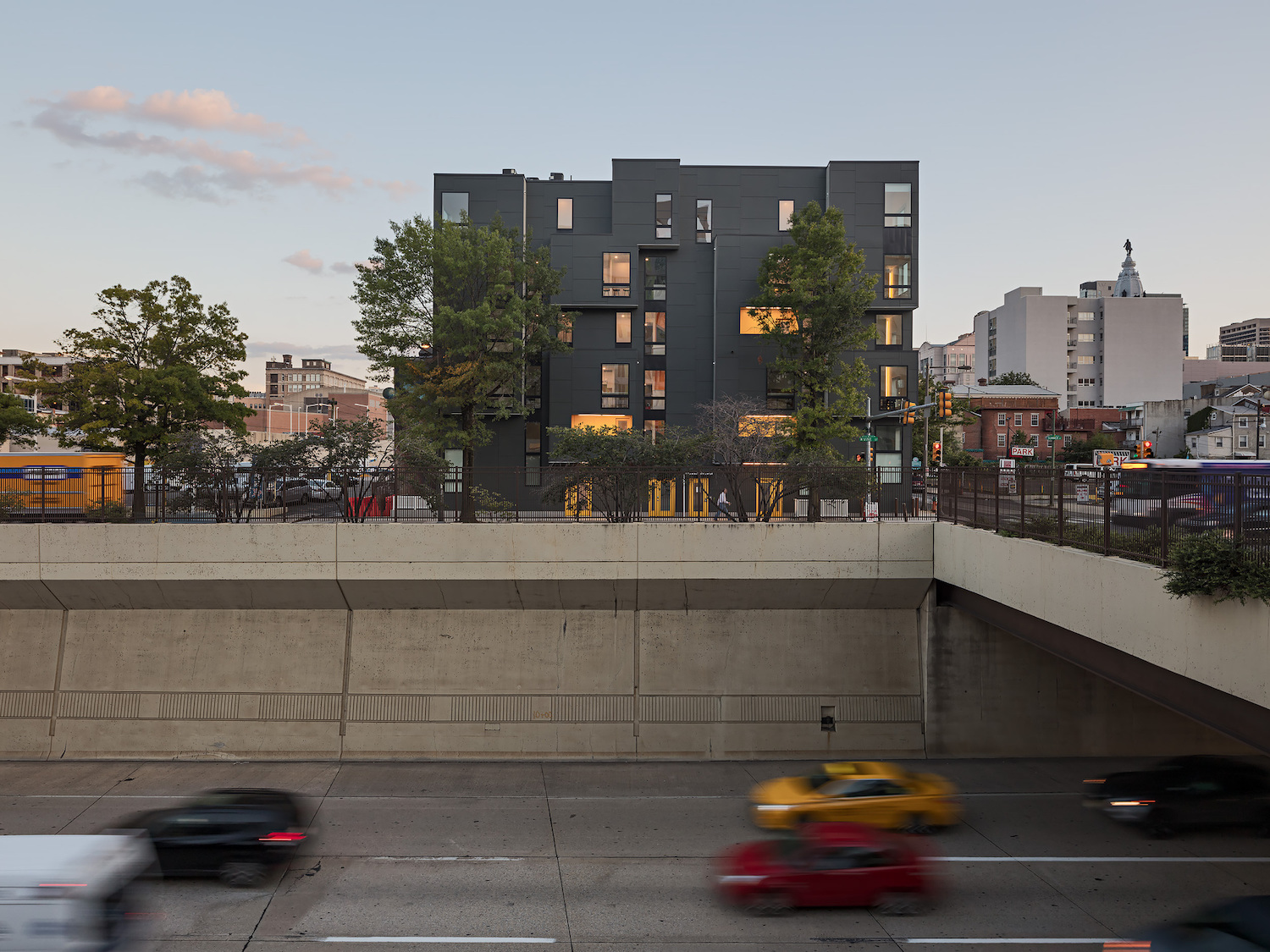 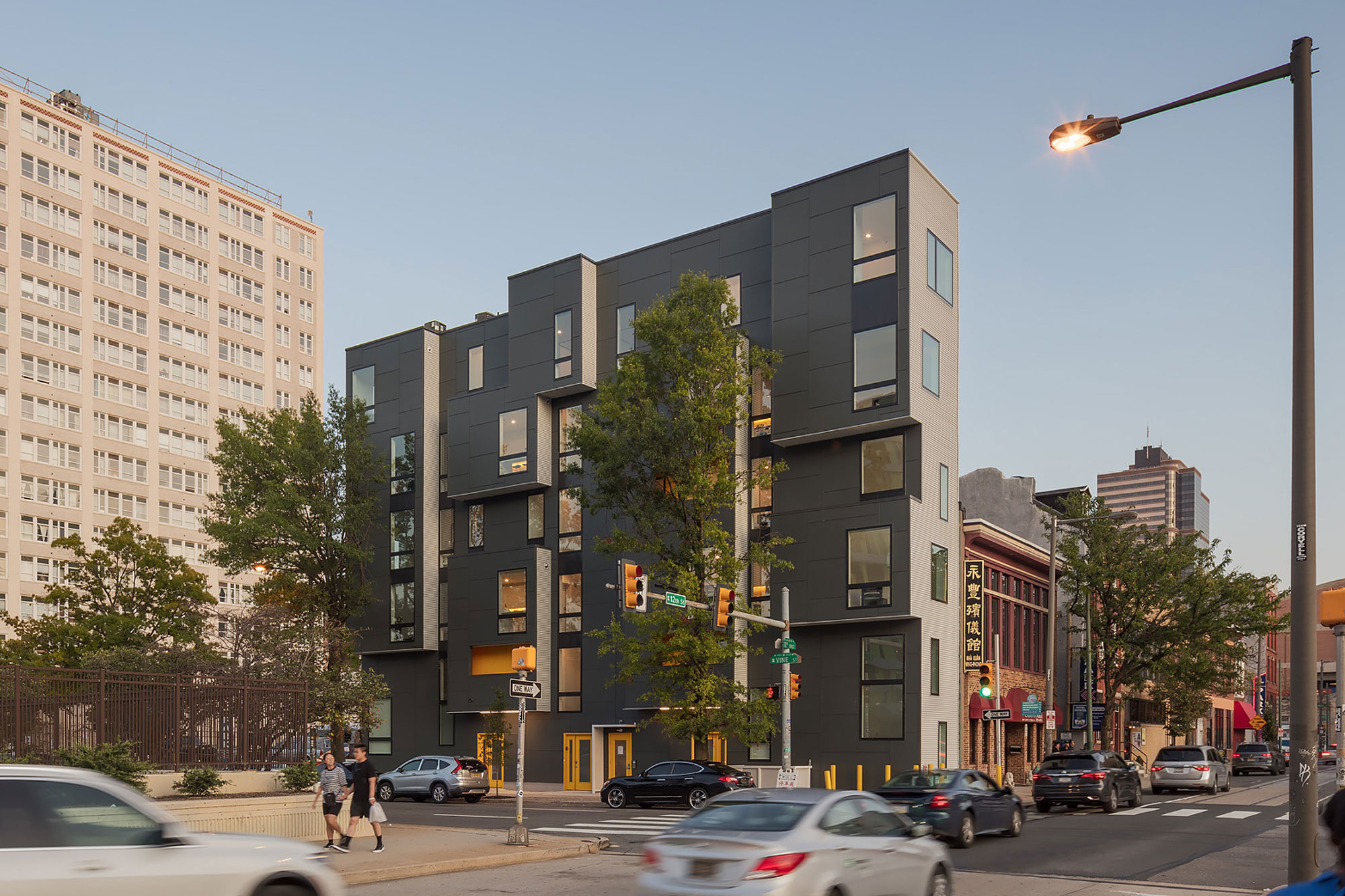 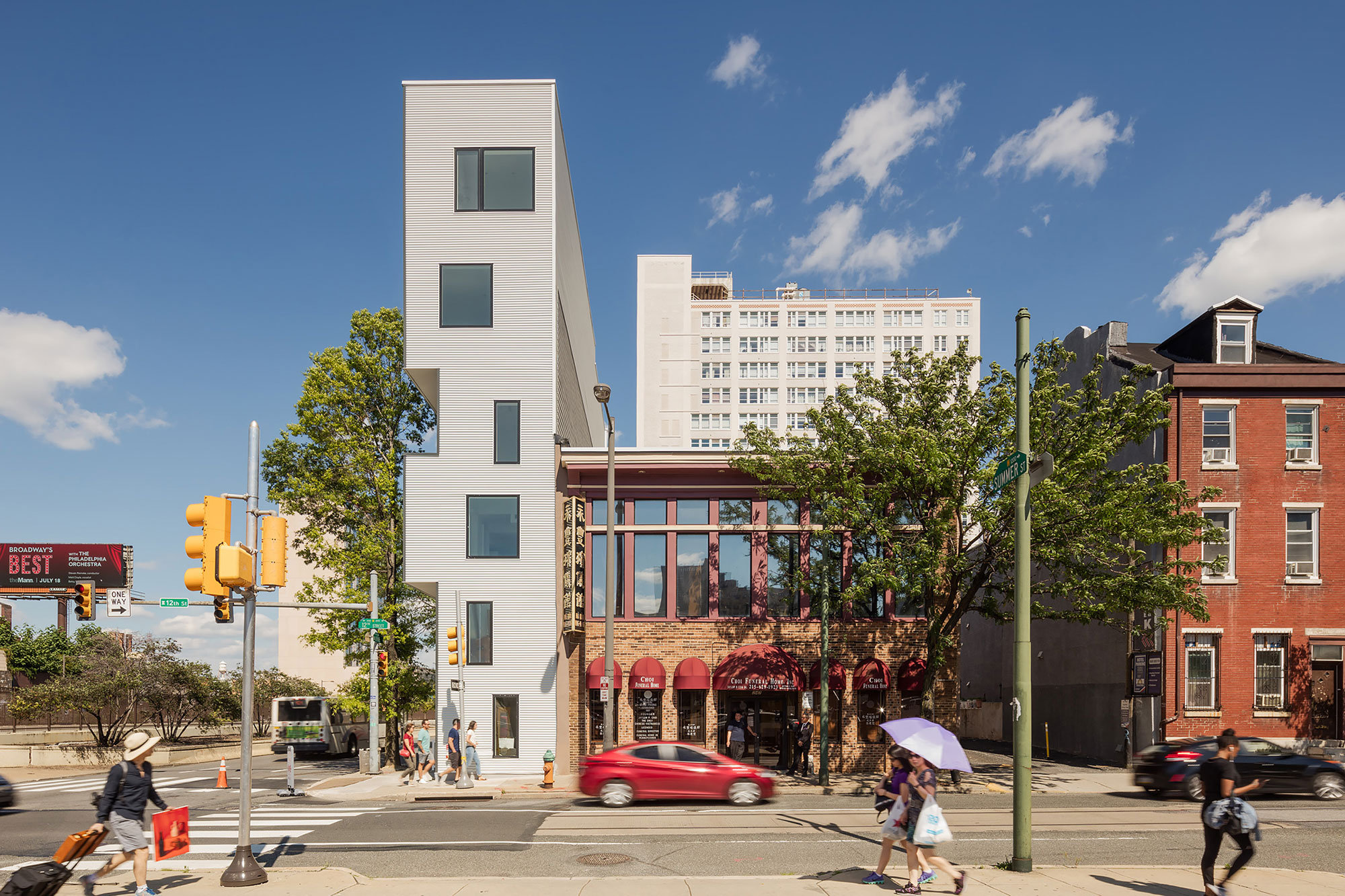 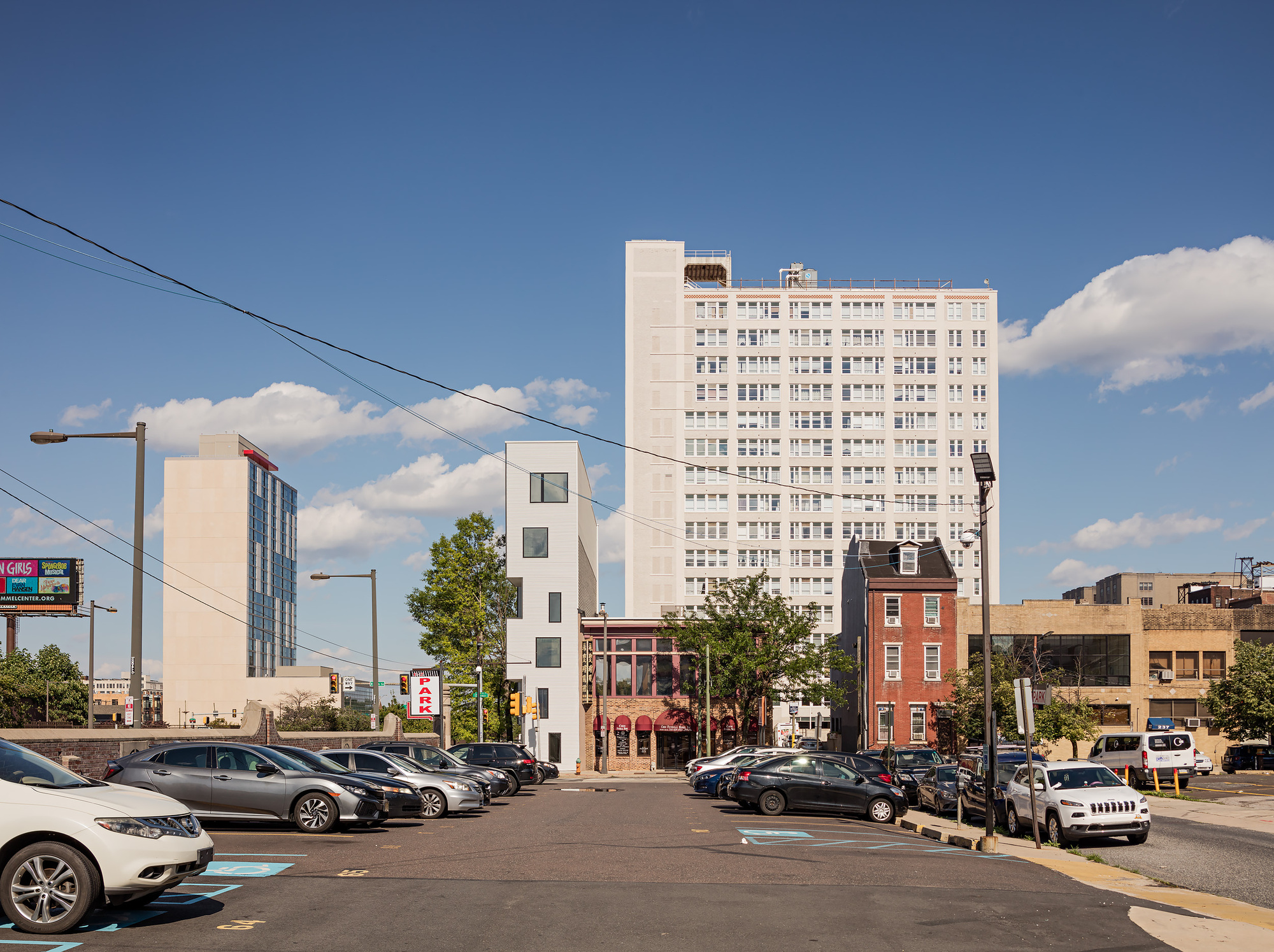 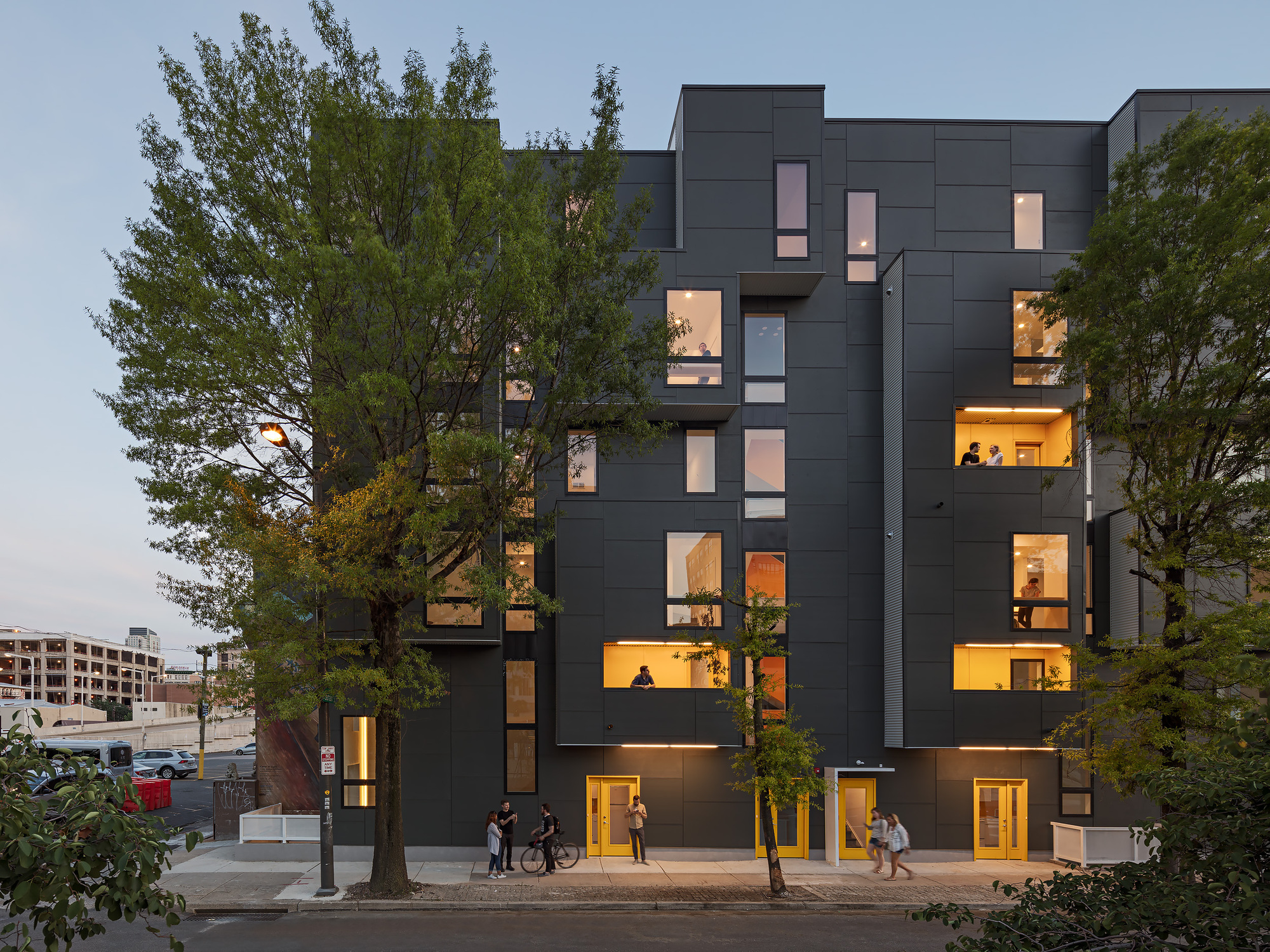 When Interface Studio Architects designed XS House, they wanted to make the most of an extremely narrow site along the Vine Street Expressway in Philadelphia’s Chinatown neighborhood. While most of the expressway’s oddly shaped, leftover lots are used for surface parking, XS House adds urban density by making the most of a code variance through its facade and massing. Zoning allows facade projections up to three feet in depth, typically an additional space utilized for bay windows. Instead, ISA was able to expand multiple units by as much as a third, a move that embraces the project’s narrow footprint along this leftover slice of land.

The XS House is sited on an 11-foot-by-93-foot lot that was previously used for tandem parking just two cars. The team found additional space through bays, mezzanines, balconies, and bi-level units. Seven apartments were stacked one atop another while maintaining a minimal, single-stair core layout. Lower units are entered directly from the street, while two micro-lofts and a pair of two-bedroom bi-levels on the upper floors share the same staircase. The central stair incorporates multiple building amenities, including a car-share waiting zone and a mail area accessible to all residents. With nine bedrooms, the project features loft-style layouts with open floor plans, galley kitchens, and views of the city skyline.

Technically a four-story structure, the project takes on a sense of verticality on a site zoned with no height restrictions. The wafer-thin building features a 63-foot-tall section that connects seven levels of space across 5,000 square feet. The project’s “bays” are clad with stacked fiber cement panels to create a staggered facade pattern applied to its asymmetrical massing. Using the Reveal Panel System by James Hardie, the cool gray fiber cement components were specifically developed for multi-family and light commercial construction. Featuring narrow channels and oversized button screws, the panels connect with Englert’s corrugated metal end walls to create contrast, texture, and rhythm along the facade.

XS House is a study in expanding the building envelope. Inspired by small homes and housing blocks in Tokyo, the team set out to create a simple, off-the-shelf construction utilizing wood-framing. The result was an as-of-right project featuring a walk-up configuration and expansive windows that open up to the city. Emphasizing vertical living, XS House addresses Philadelphia’s history of auto-centric, midcentury planning to show how even the smallest sites hold the potential for urban renewal.