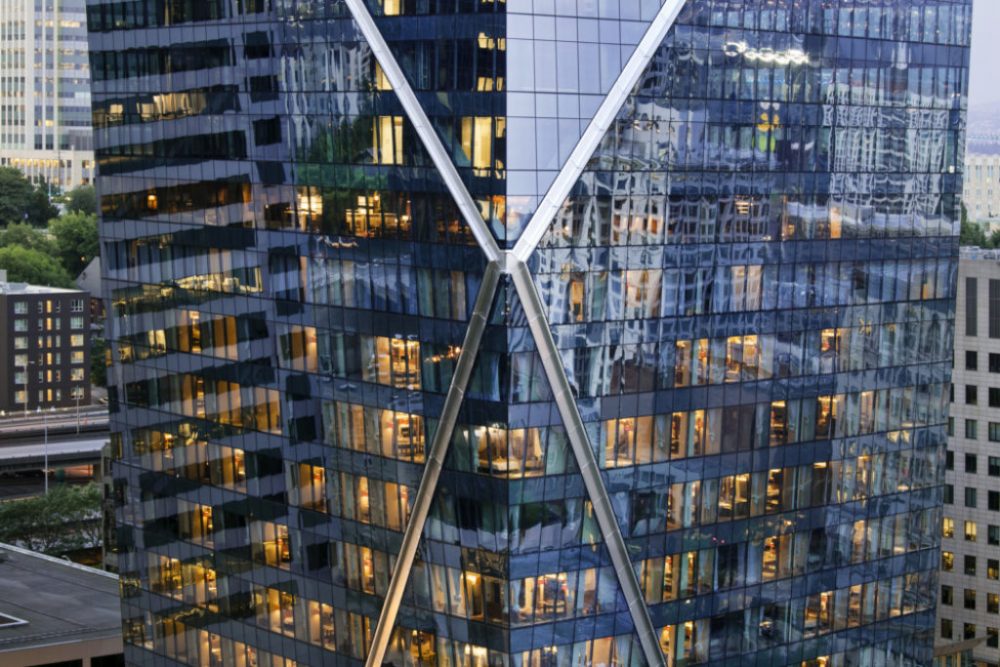 When 875 North Michigan Avenue, formerly the John Hancock Center, opened on Chicago’s Magnificent Mile in 1969, it signaled a departure from the all-too-prevalent trabeated Miesian skyscraper. Its subtly tapered 100-story form and iconic X-frame structure, designed and engineered by Skidmore, Owings & Merrill’s Bruce Graham and Fazlur Khan, respectively, demonstrated that beauty and structural performance need not be mutually exclusive. As if taking this lesson to heart, a new crop of expressively framed towers has sprung up around the country in recent years, each one upping the ante in exuberant form and structural daring.

In Seattle, a short walk from the city’s famed, OMA-designed central library, The Mark gamely cantilevers over its older neighbors. The 48-story hotel-and-office tower, designed by ZGF Architects and engineered by Arup, relies on a hybrid steel “megabrace” and concrete core structure to perform its acrobatic feat. Comprising multistory steel members, the triangulated megabrace—so termed by Arup—addresses the structural complexities of building a formally expressive tower in a seismically active region. The architects constructed around two historic structures nestled below The Mark’s protruding midsection: the First United Methodist Church (now an event space) and the Rainier Club. Their efforts have resulted in an eclectic city block, complete with classically proportioned low-rise structures and a decidedly contrapposto tower. 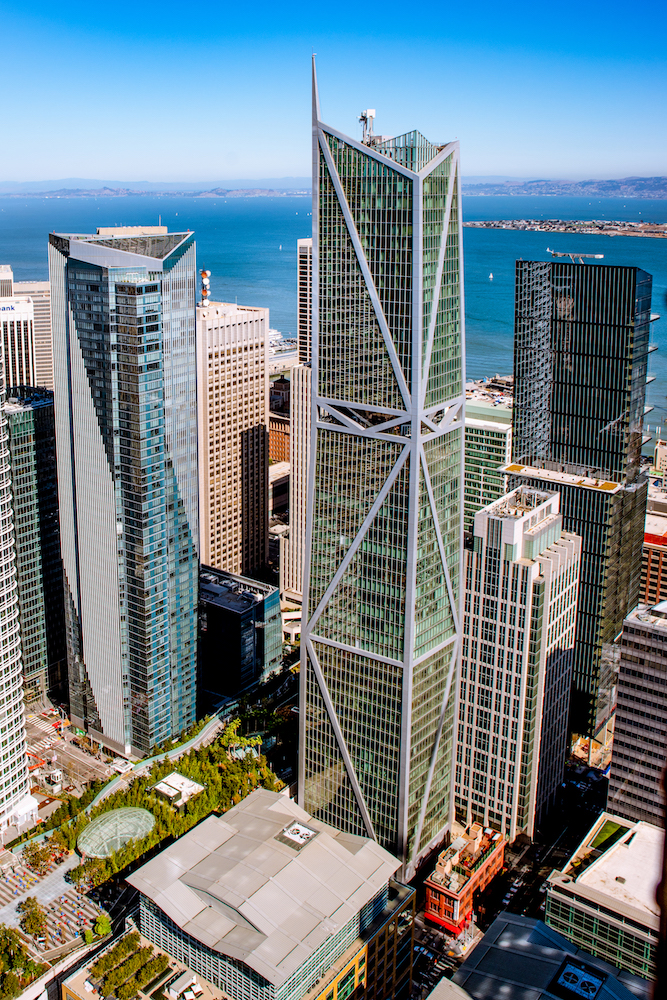 In San Francisco, the Heller Manus Architects–designed 181 Fremont employs a similar megabrace structure (again courtesy of Arup) capable of withstanding the city’s seismic activity and ever-present wind loads. But the slightly tapering tower also deploys a structurally integrated damping system (rather than the more typical tuned mass damper), which enabled the architects to increase the tower’s height; at 802 feet, 181 Fremont is the tallest residential high-rise on the West Coast. And because the shocklike dampers work in-line with the megabrace, the design team was able to eliminate tons of steel from the project—3,000 tons, in fact. The envelope created additional efficiencies; calibrated to the angle of the sun, the “saw-tooth” glass facade reduces solar gain by 6 percent.

In a departure from the steel systems normally associated with exoskeletal structures, Ateliers Jean Nouvel turned to concrete for the French firm’s first residential tower, 53 West 53 in Midtown Manhattan. At almost the same supertall height of 875 North Michigan Avenue, 53 West 53 even takes some aesthetic cues from the Chicago icon, but the similarities are superficial. Nouvel’s skyscraper was meant to be even taller, but political and economic exigencies—negotiations with city planning, the Great Recession—prompted a complete structural rethink, including subbing out the steel for reinforced concrete. Sloping and slanting up to a pointed precipice, the structure trades a normal diagrid for highly irregular facets, palpable on the exterior as well as the interior. The result is a celebration of the structure in all of the building’s 145 units, each with expansive windows spanning massive diagonal structural members.

In downtown Miami, One Thousand Museum takes the possibilities of concrete to even further extremes. Designed by Zaha Hadid Architects and engineered by DeSimone, the luxury high-rise employs a unique structural system made up of 4,800 prefabricated glass fiber reinforced concrete (GFRC) panels. The pieces, which were individually fabricated in Dubai and test fitted before being shipped to the dense Miami lot, act as both concrete formwork and finished surface. Whereas 181 Fremont and The Mark contend with intense seismic conditions, One Thousand Museum is faced with a very real hurricane threat. The structural system was put to the test perhaps earlier than expected when Hurricane Irma, a Category 4 storm, struck Miami in September 2017, as construction was underway. By exploring the formal potential of GFRC, the svelte tower sets a new bar for aesthetic, structural, and construction methods. As a proof of concept, it represents a dramatic advancement of 875 North Michigan Avenue’s revolutionary construction, while opening new doors for expressionist towers to come.