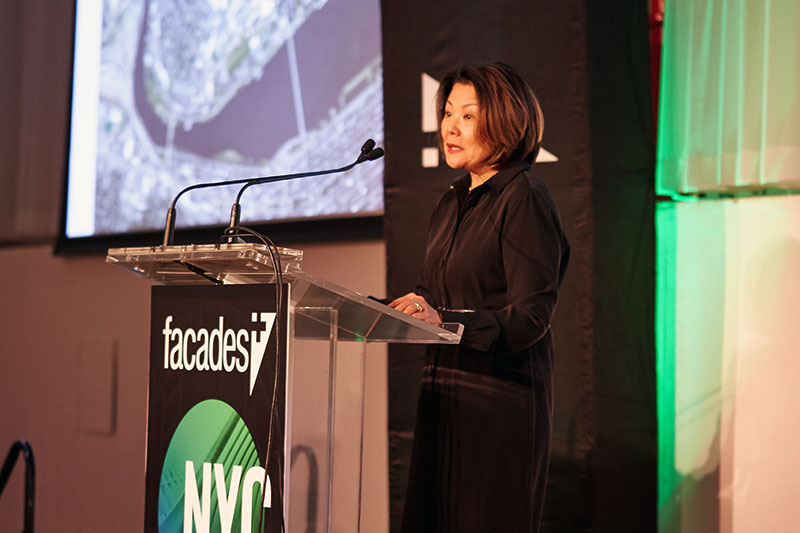 DAY 1
Attend a full day of stimulating presentations and panels that examines the fast-paced evolution of facade technology.

PANEL Climate-Responsive Facades: The Next Generation of High-Performance Buildings

Los Angeles leads the way in reducing buildings’ impact on climate. Increasing attention is paid to implementing responsible practices through facade design and is driving the industry forward. Energy codes, zoning, and materials are evolving to keep up with the demand to design with a lighter touch on the environment. These Experts will present high-performance facade projects that deploy strategies that reduce carbon, incorporate healthy materials, and drastically cut energy usage.

It is common knowledge among building industry professionals that building operations account for approximately 40% of global emissions. Since the founding of Architecture 2030, our industry has been highly successful at reducing building energy consumption and making buildings more operationally efficient. More importantly, we continue to make progress in the quest for net zero. Panelists will present and discuss a deep dive into how to reduce carbon in the design and operation of building enclosures.

The SoFi Stadium is hard to miss. It is the centerpiece of Inglewood’s brand-new Hollywood Park, and, in its deft engineering and material craft, raises the international bar for stadium design. The open-air stadium houses three state-of-the-art venues under one monumental roof canopy built of tens of thousands of perforated anodized aluminum panels and fritted ETFE; both of which render the site breathable and daylit beyond belief. This panel will bring together HKS Architects and structural and facade engineer Walter P Moore, along with facade consultant Studio NYL, in a detailed presentation and discussion of how the project came together.

Mid-Century icons across the country are approaching the end of their lifespans, and their renovation provides an opportunity to upgrade outdated facade and vital building systems to conform with the performance demands of today. This panel will explore two deep retrofits and the reuse of mid-century modern buildings. These projects brought the buildings up to high performance standards and accommodated new programs while retaining the history and character of their original design intentions. We will take a close look at Paul Revere Williams-designed Pritzker Hall with CO Architects and KPFF and more.

This course is designed to eliminate the confusion associated with the basics of perimeter fire containment systems. Fully understanding the role and value of tested perimeter fire barrier systems in today’s ever-changing and complex designs cannot be overstated and understanding the unique challenges of these designs present are critical in the design phase to eliminate costly changes, delays, and compromised life safety requirements prior to construction.

This presentation will focus on the need for security glazing to protect people and property from human attacks and severe weather. Laminated glass can provide intrusion resistance, as well as protection from flying glass that occurs after a bomb blast. Bullet resistant laminates are designed specifically to stop bullet penetration and fragmentation.  Industry standards for testing and specifying security glazing will be reviewed, including standards for physical attack, bomb blast, ballistics and wind-borne debris protection.

This course provides an overview of the properties of photocatalytic ceramic tiles including the science, health benefits and applications.