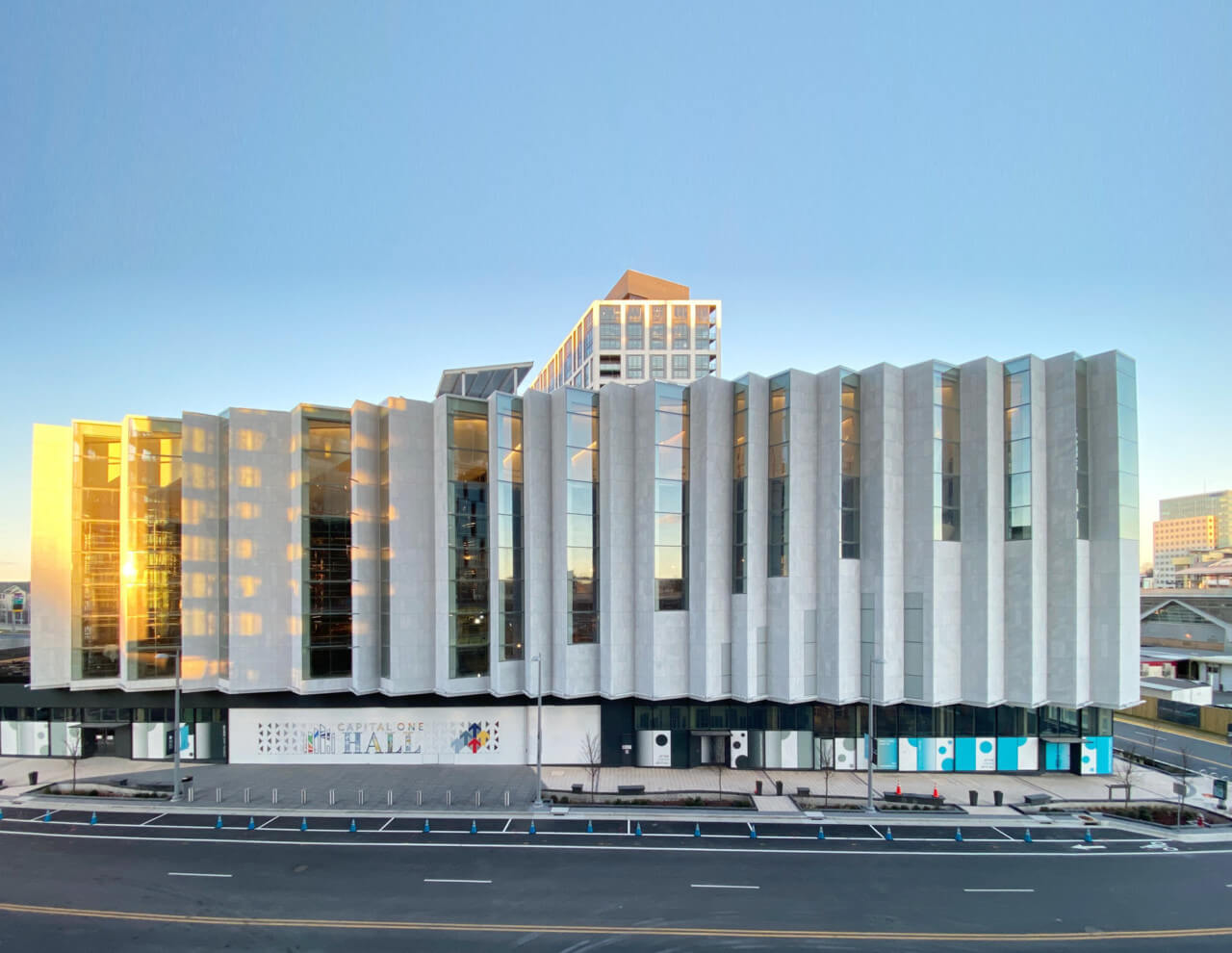 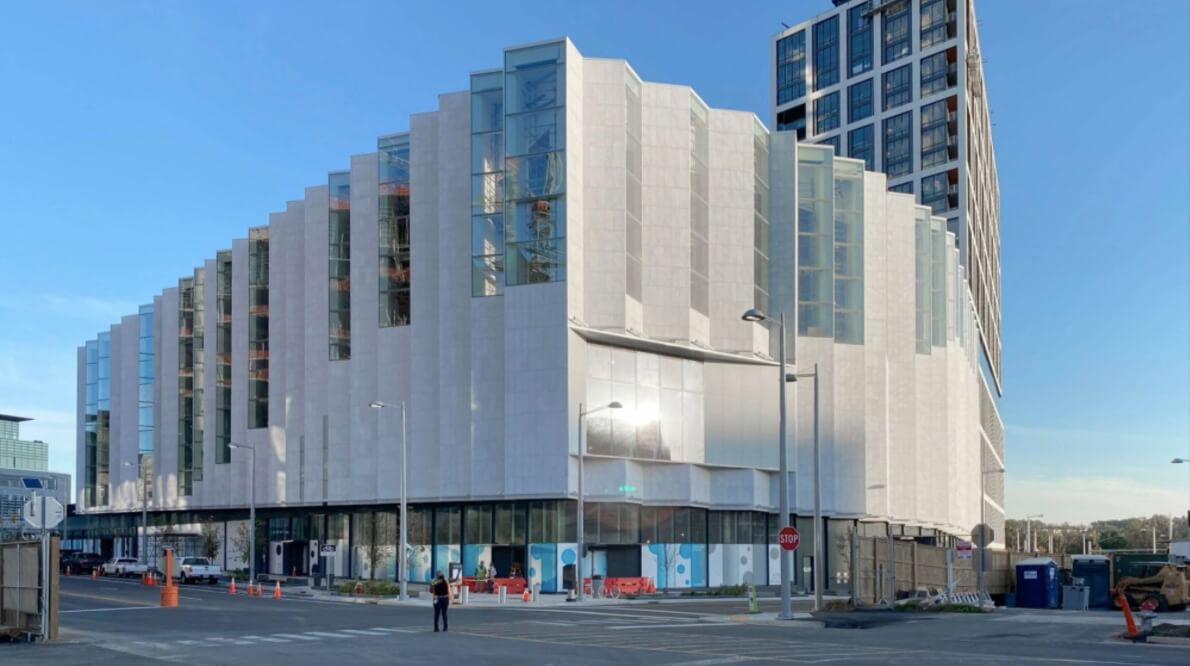 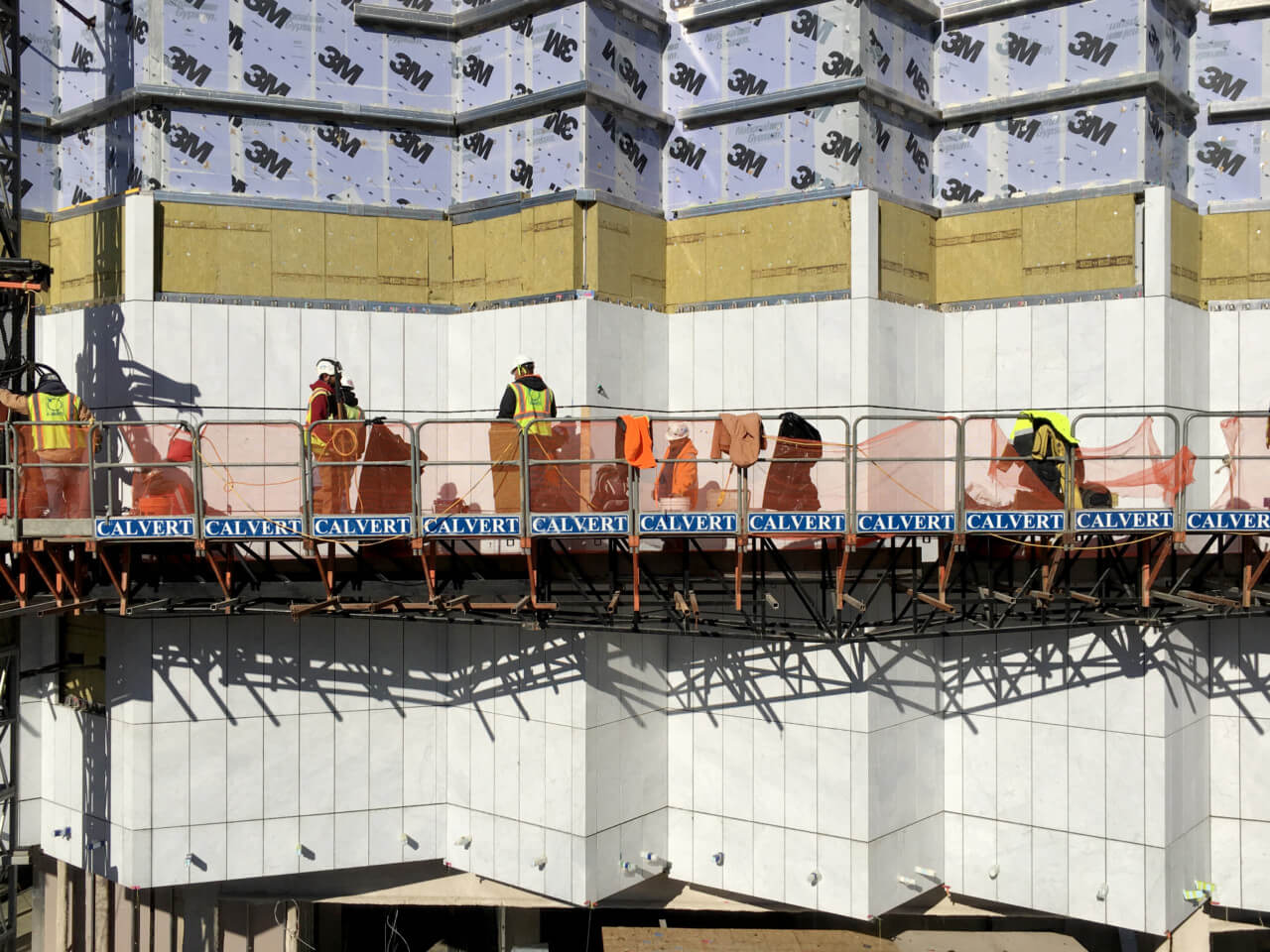 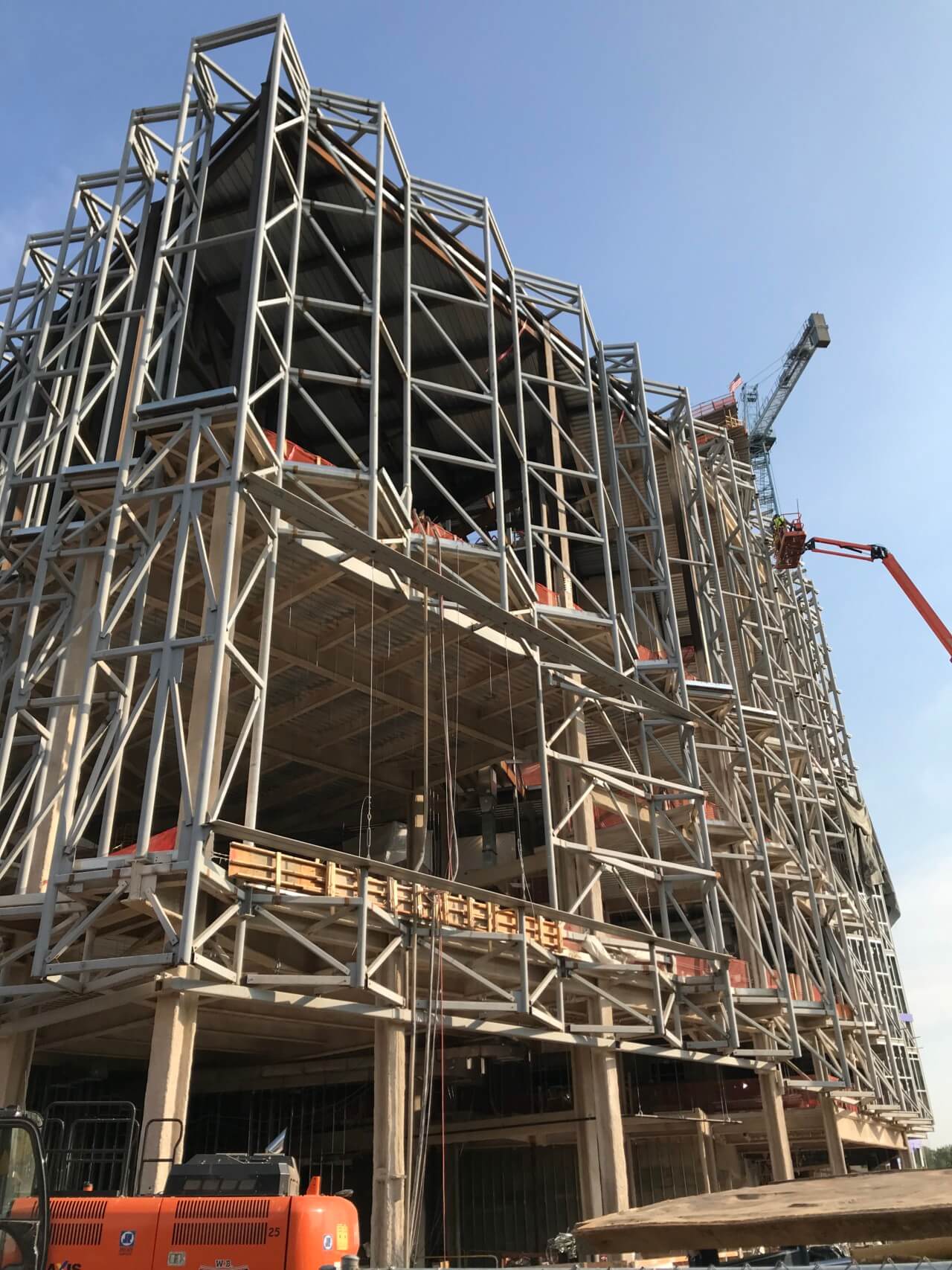 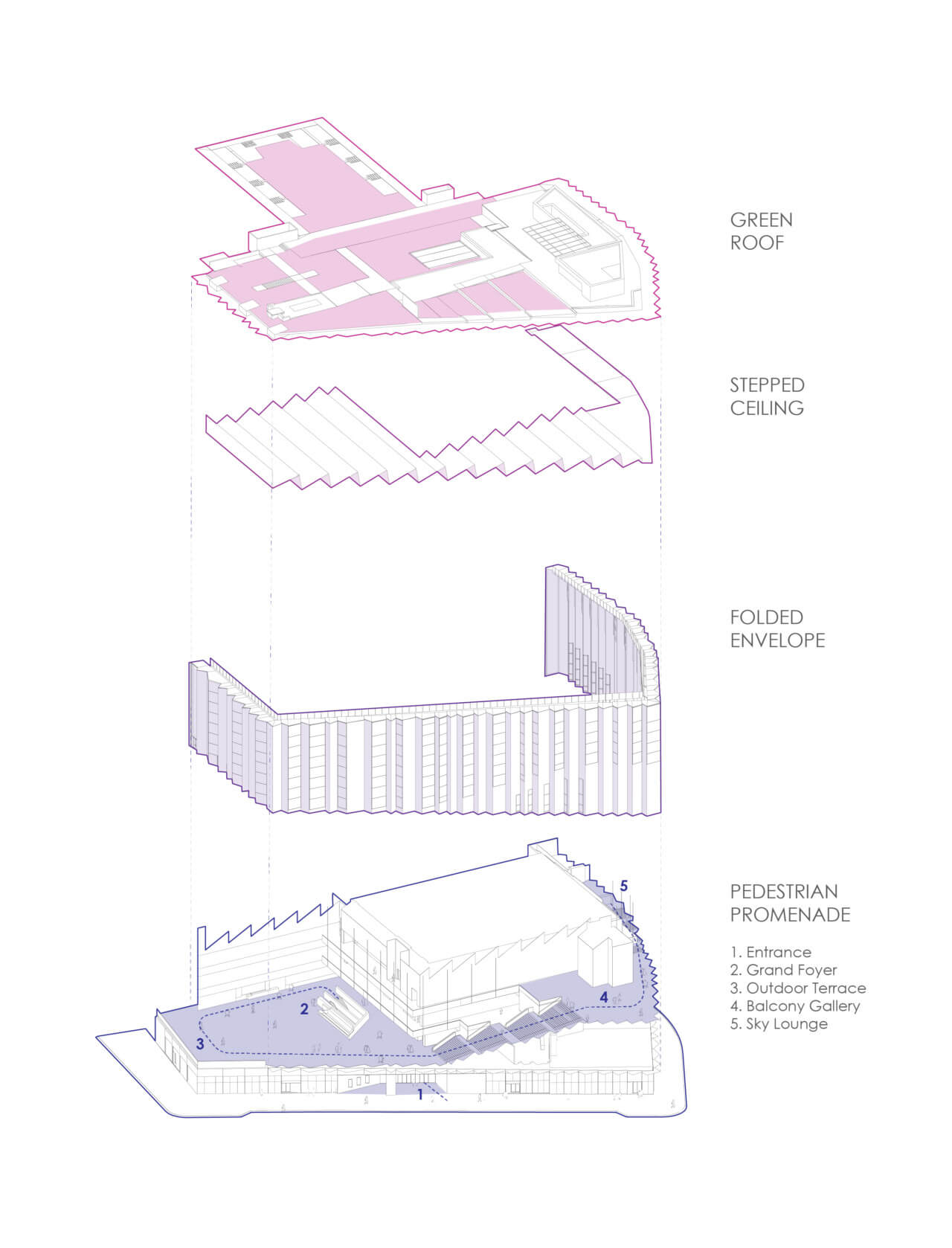 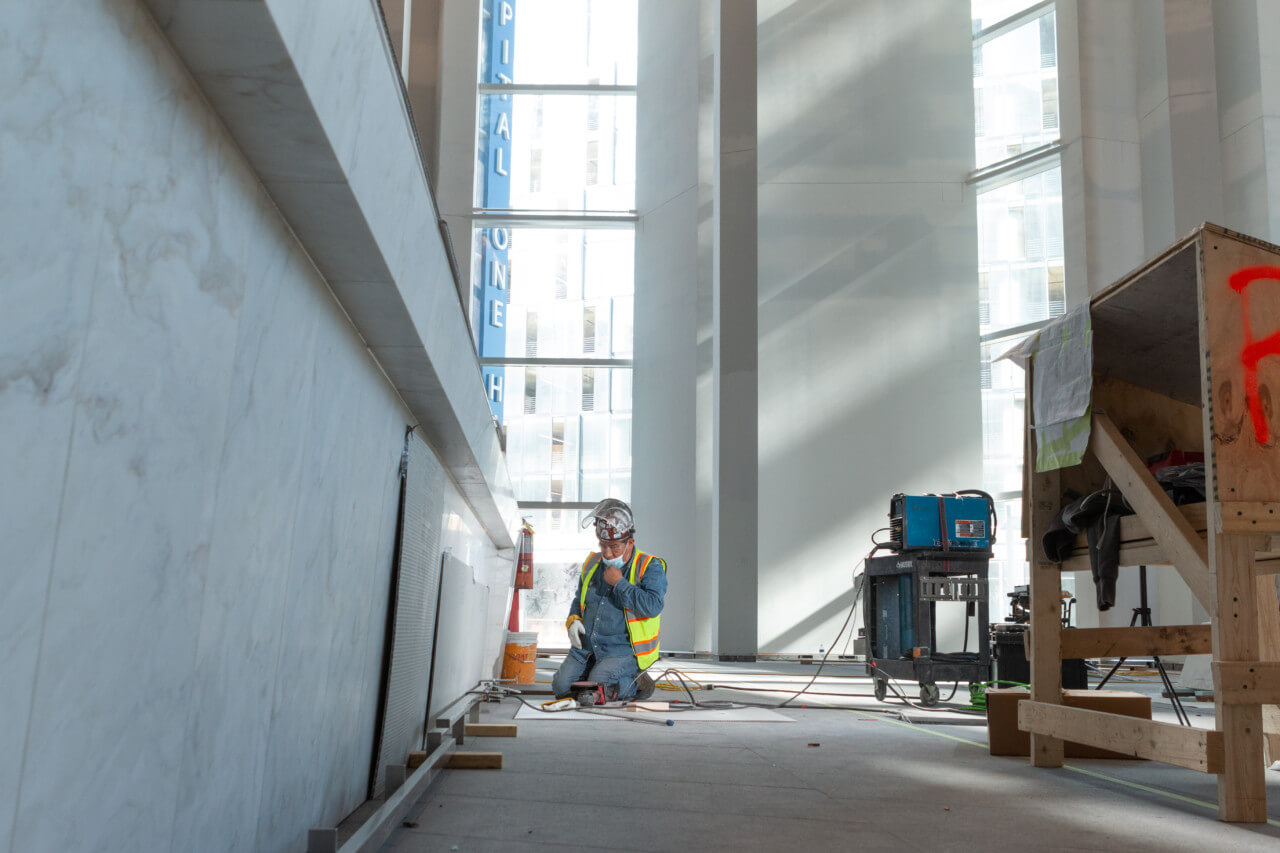 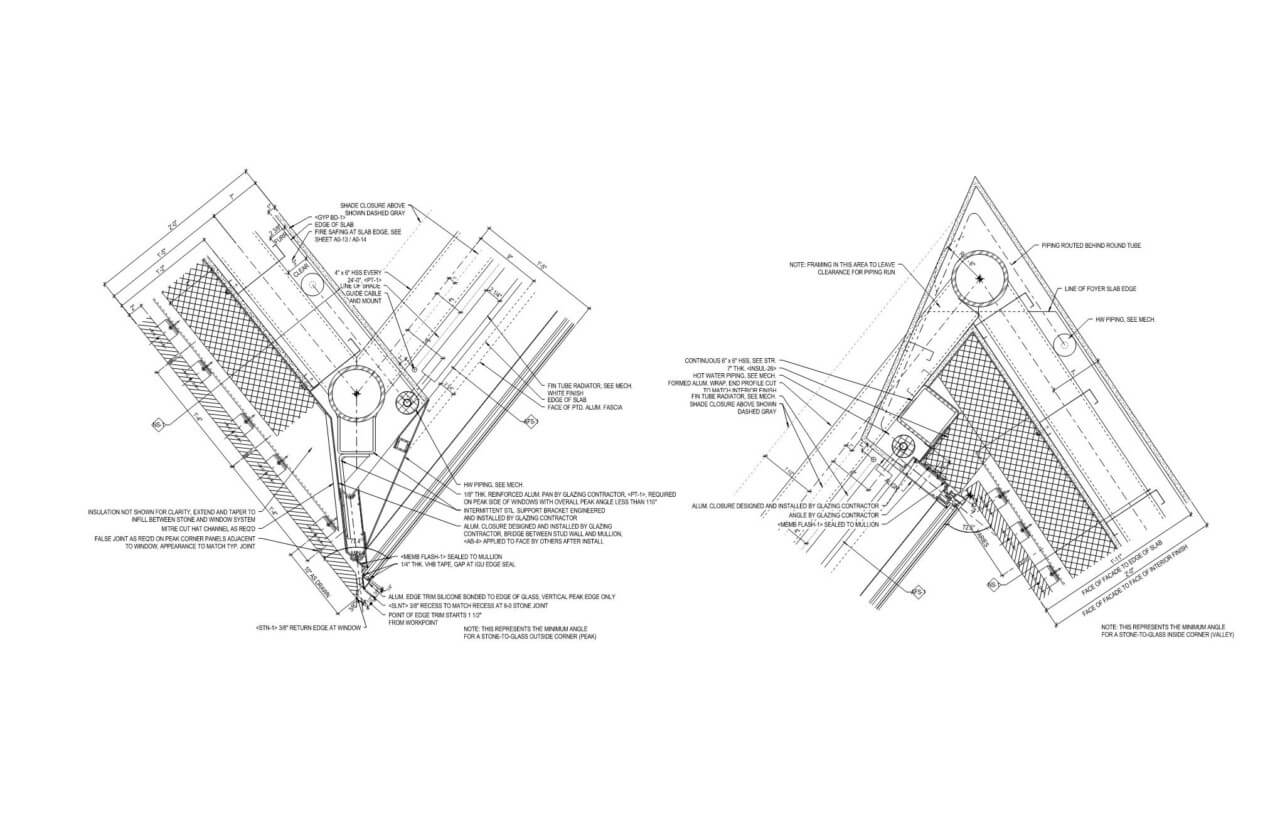 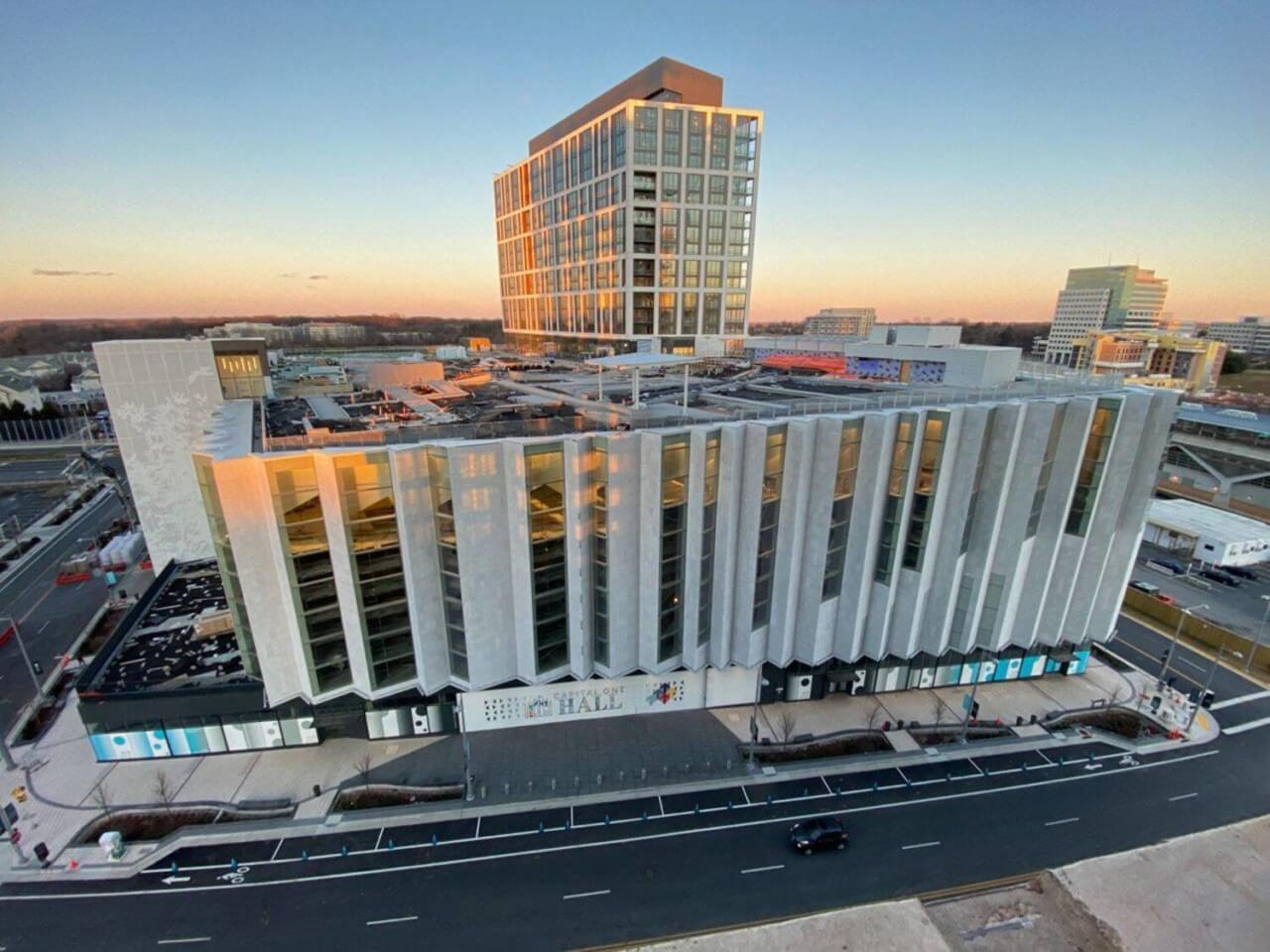 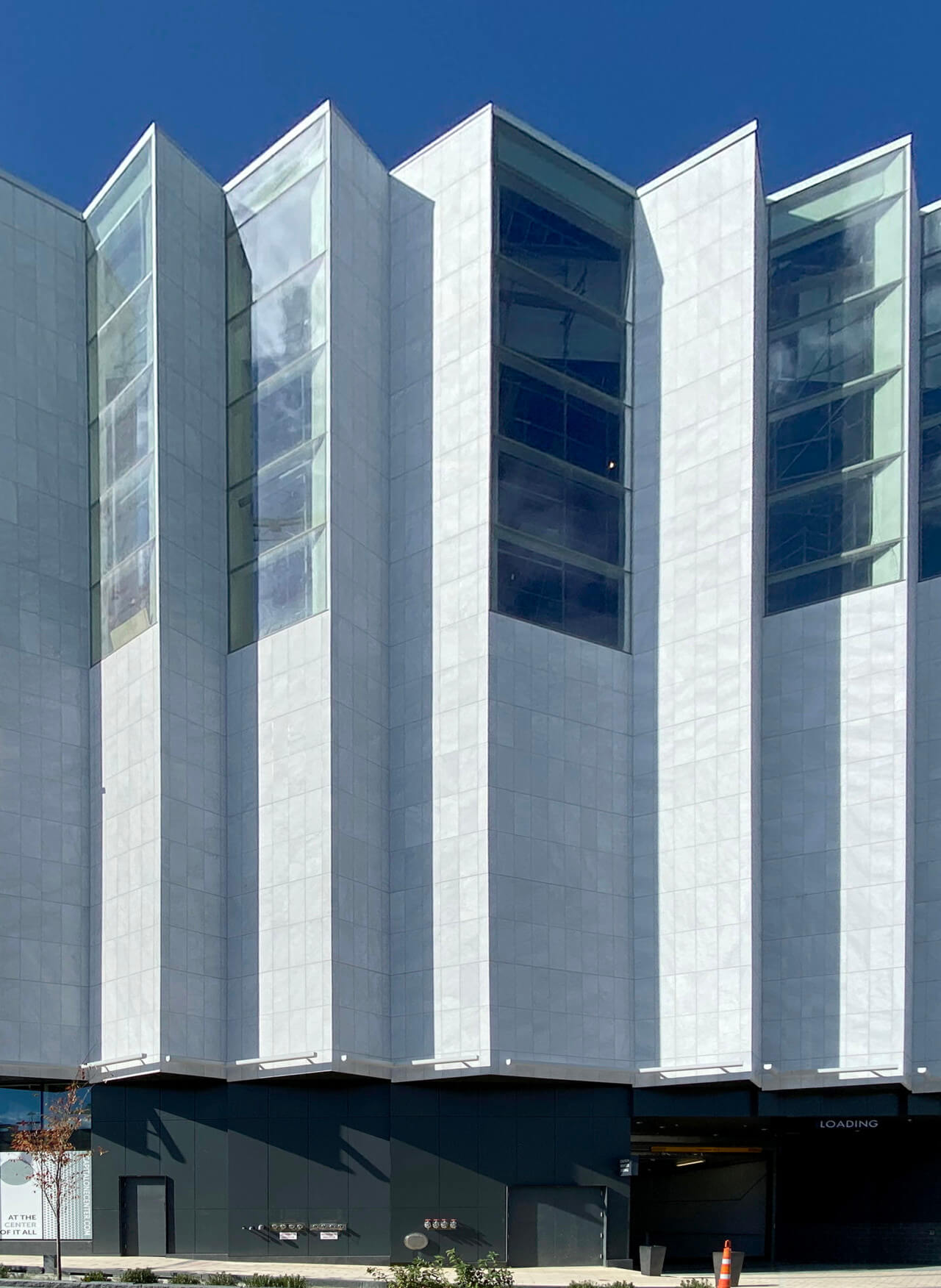 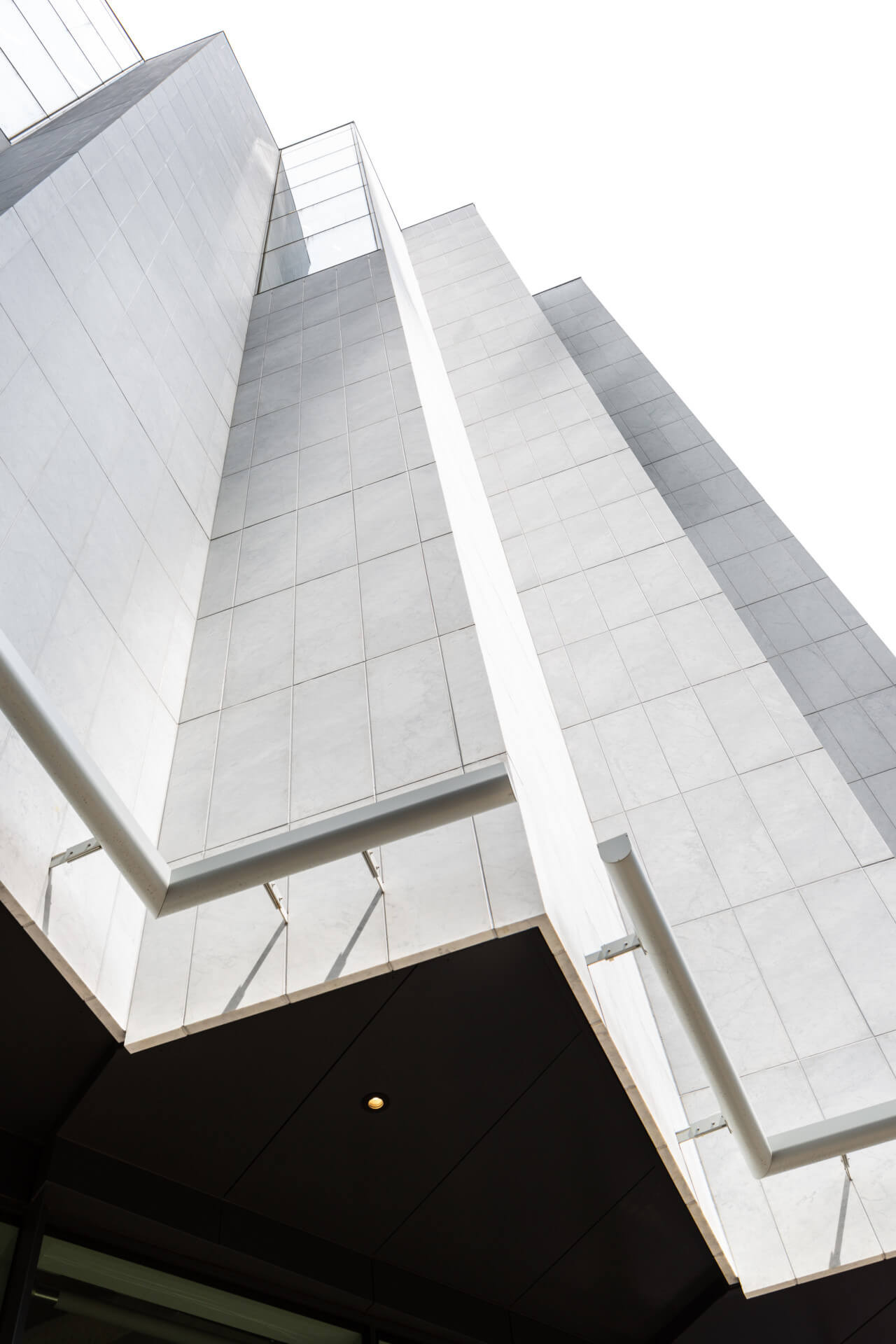 <
►
>
Situated within the growing Tysons East neighborhood, The Hall comprises a variety of public spaces suited to host a range of large and small events (Courtesy HGA)

Conspicuously clad in bright white marble, HGA’s Capital One Hall stands out on its 2.5-acre lot amongst a sea of glass-clad skyscrapers in Tysons, Virginia. Capital One Hall is situated in a vibrant residential and commercial district and will offer nearly 10,000 square feet of public space of its total 21,000. Enclosed by the impressive folding panel facade system is a world-class performance space dubbed “the Atrium,” a smaller black box theater, a rooftop park hosting sports programs and food venues, and a grocery store on the ground level. The mixed-use urban redevelopment of Capital One’s corporate headquarters is set to open in the fall of 2021.

When designing a white stone exterior, the seemingly obvious choice is marble. Ask any architect, however, and they will mention how most proceed with caution at the idea, due to the material’s proclivity to bow when exposed to moisture and temperature changes. HGA worked with the client, presenting alternatives such as Italian travertine, silvery Alabaman limestone, or Brazilian swirling granite to avoid joining the high number of noteworthy marble failures in the past sixty years. For Barry Mark, vice president of design and construction at Capital One, none of these had the distinctive beauty and character for the vision he had of the project. The team pulled in the London-based, Italian geologist Paola Blasi to source a durable high-quality stone cladding that would exceed the industry standards for resistance to bowing. Her intimate knowledge of Italian marble stone quarries, paired with the rigorous stone testing protocol from the Swedish stone laboratory RISE (led by global marble expert Björn Schouenborg) allowed for an informed decision to be made. Ultimately, the team landed on an Italian marble from the Cattani quarry in Carrara that is especially dense and moisture resistant. Traditionally used to make mortar and pestles, the same marble is being used to reclad Alvar Aalto’s City Hall in Nykoping, Sweden.

“There’s a tradition in architecture of looking at marble through the narrow lens of aesthetics. But the unique behavior of marble, especially its tendency to bow when exposed to moisture and temperature change, means that we also have to approach it as an engineering problem in the area of structural mechanics and materials. It’s a really fascinating challenge, definitely a tightrope walk and not something to be taken lightly,” said Alex Terzich, AIA, technical designer and facade specialist at HGA. The stone panels are typically 1′-4” by 4′-0” tall and only 2 inches thick. Cubic stone, roughly eight inches cubed, was used to match individual folds. The Guardian glass panels, fabricated by Tvitec, are 8′-0” by 12′-0” spaced for maximum daylight in the interior.

In addition to this challenge, Thornton Tomasetti developed a secondary support system for the great weight of the stone and glazed facade. The secondary steel ladder-truss system is completely custom and tailored to the unique angles and corner conditions of the folding fan orientation. The lead consultant from Arup, Markus Schulte, along with his team, provided preliminary engineering and concept details for the stone cladding support system. A comprehensive review of thermal analysis and on-site mockups was done in order to overcome the many challenges on-site in realizing this project.

Secondary to the complex foundation of the facade system, the team worked hard to coordinate the box-in-box construction assembly for the hall. Sandwiched between the grocery store loading dock and the biergarten-slash-bocce court rooftop, the venue has been painstakingly acoustically isolated with high-performance insulation so locals and visitors alike can simply “enjoy the show.” The 18-hour entertainment services inspire a portion of the modern design: warm mahogany prompted by the classic theatres from the early to mid-twentieth century contrast with the marble that is carried from the outside in. The venue is currently selling tickets for its first show comedy show in the fall.