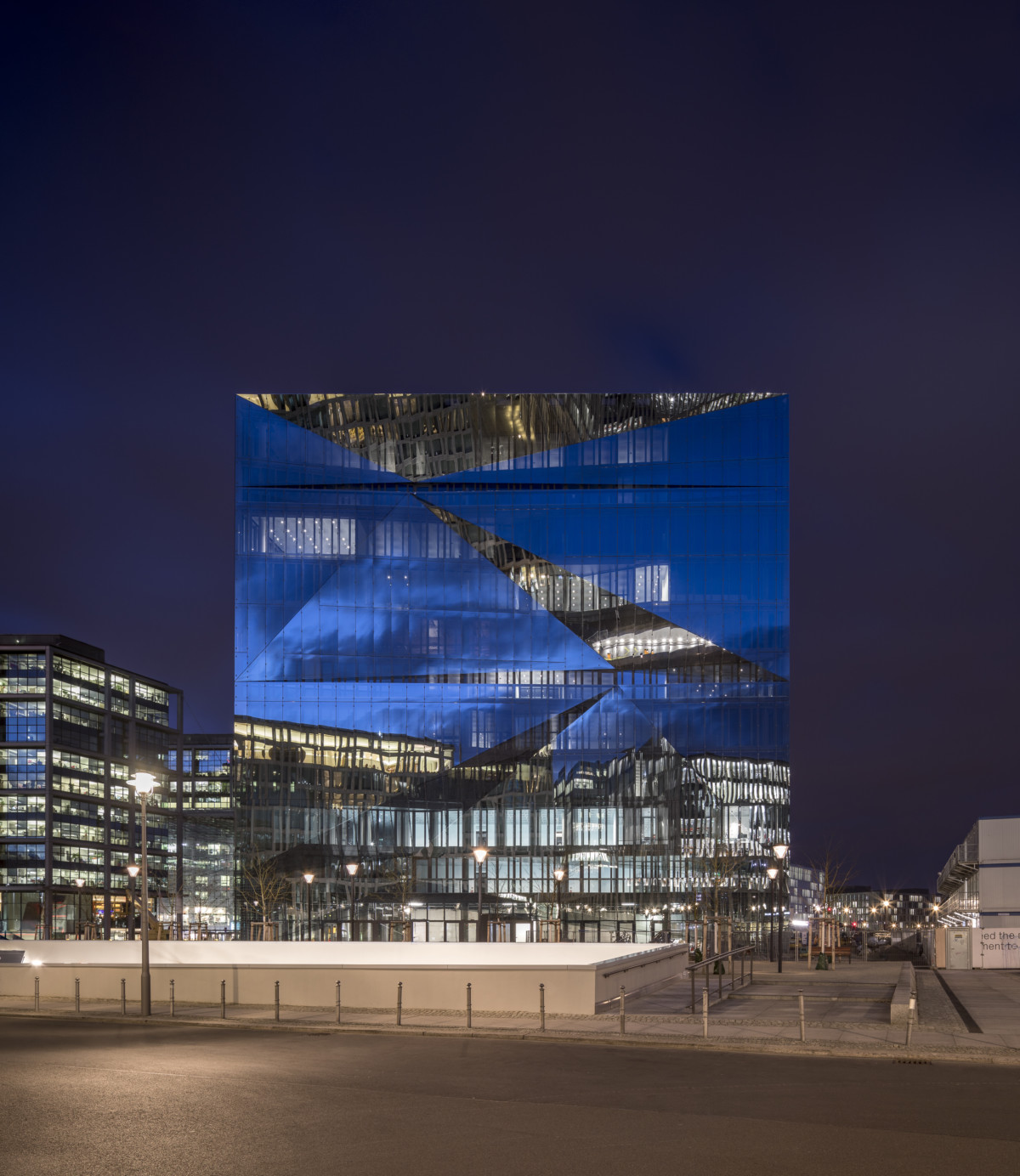 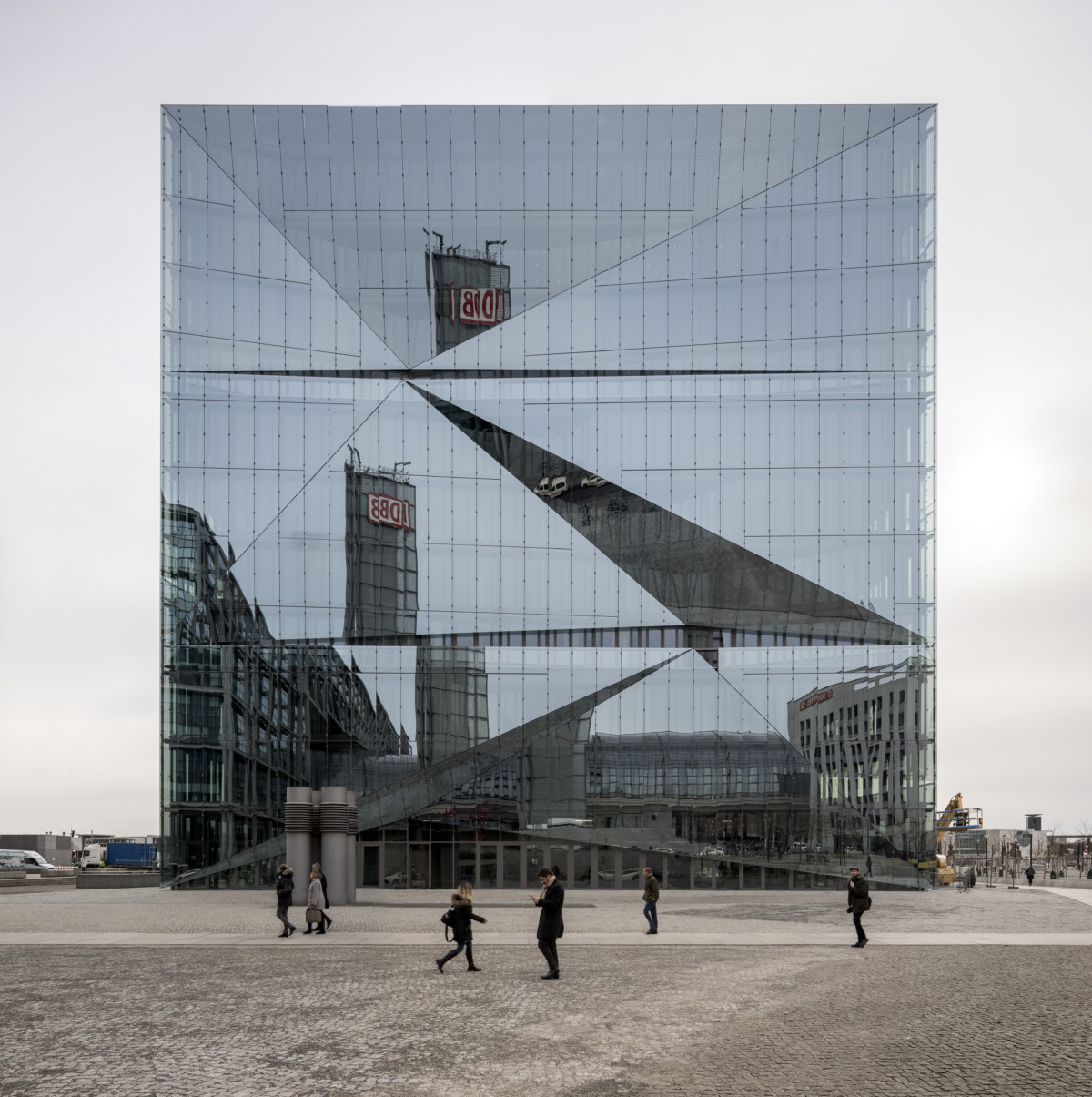 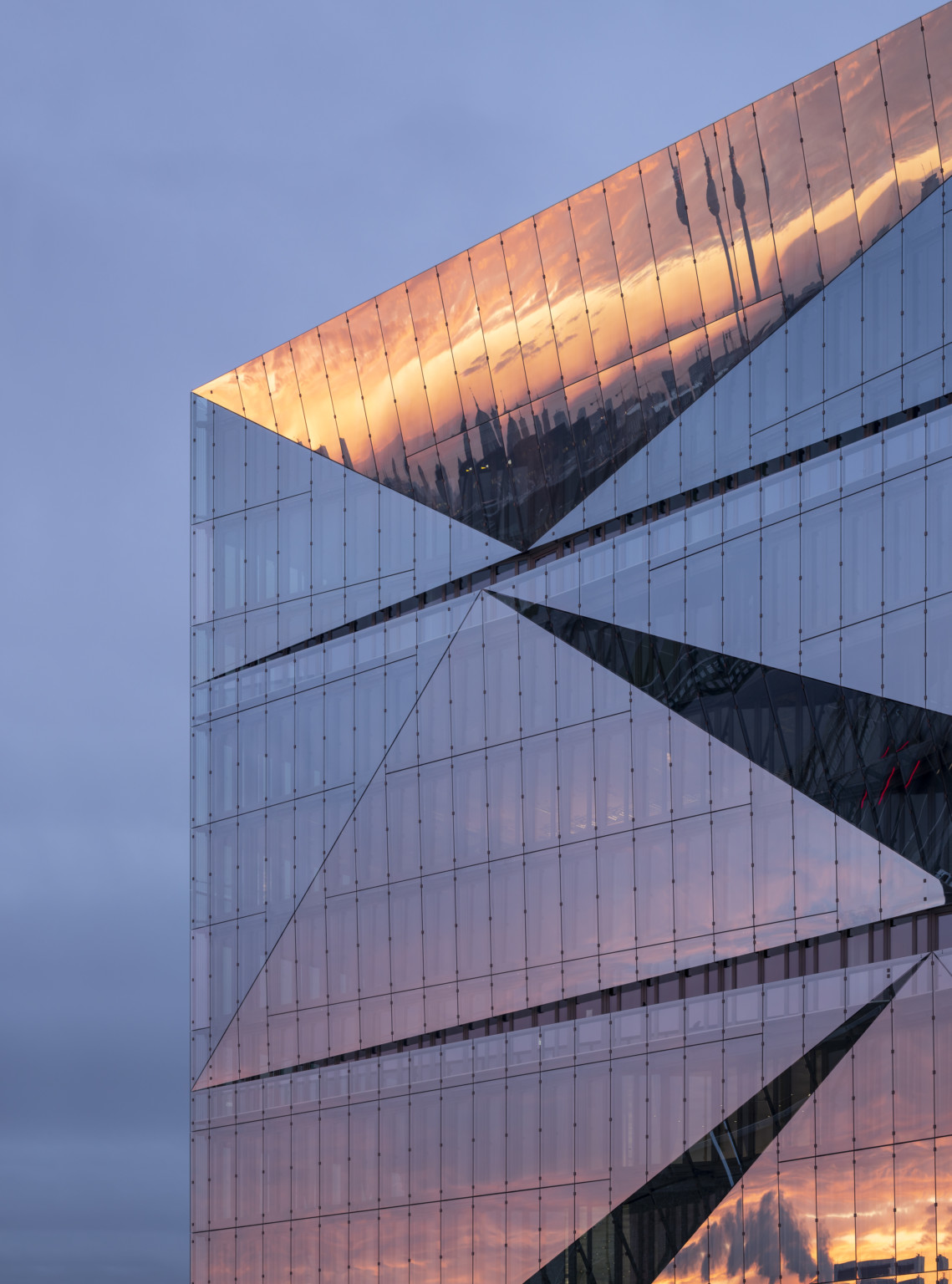 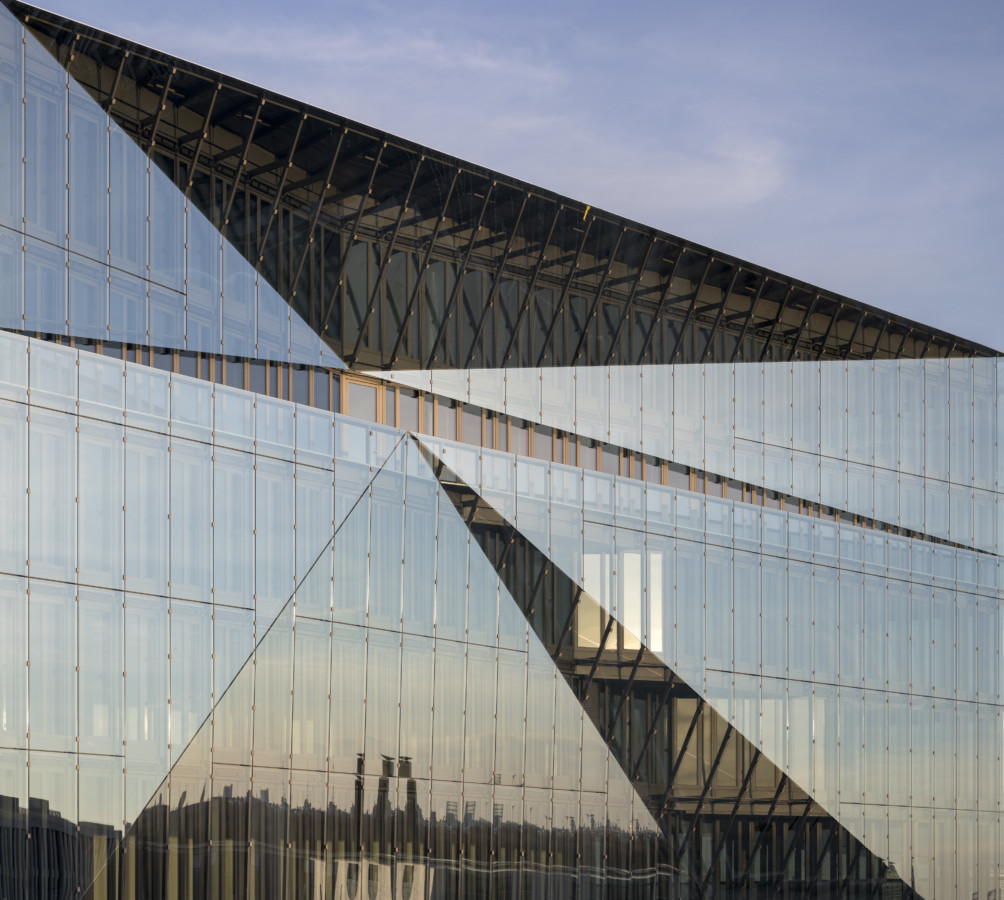 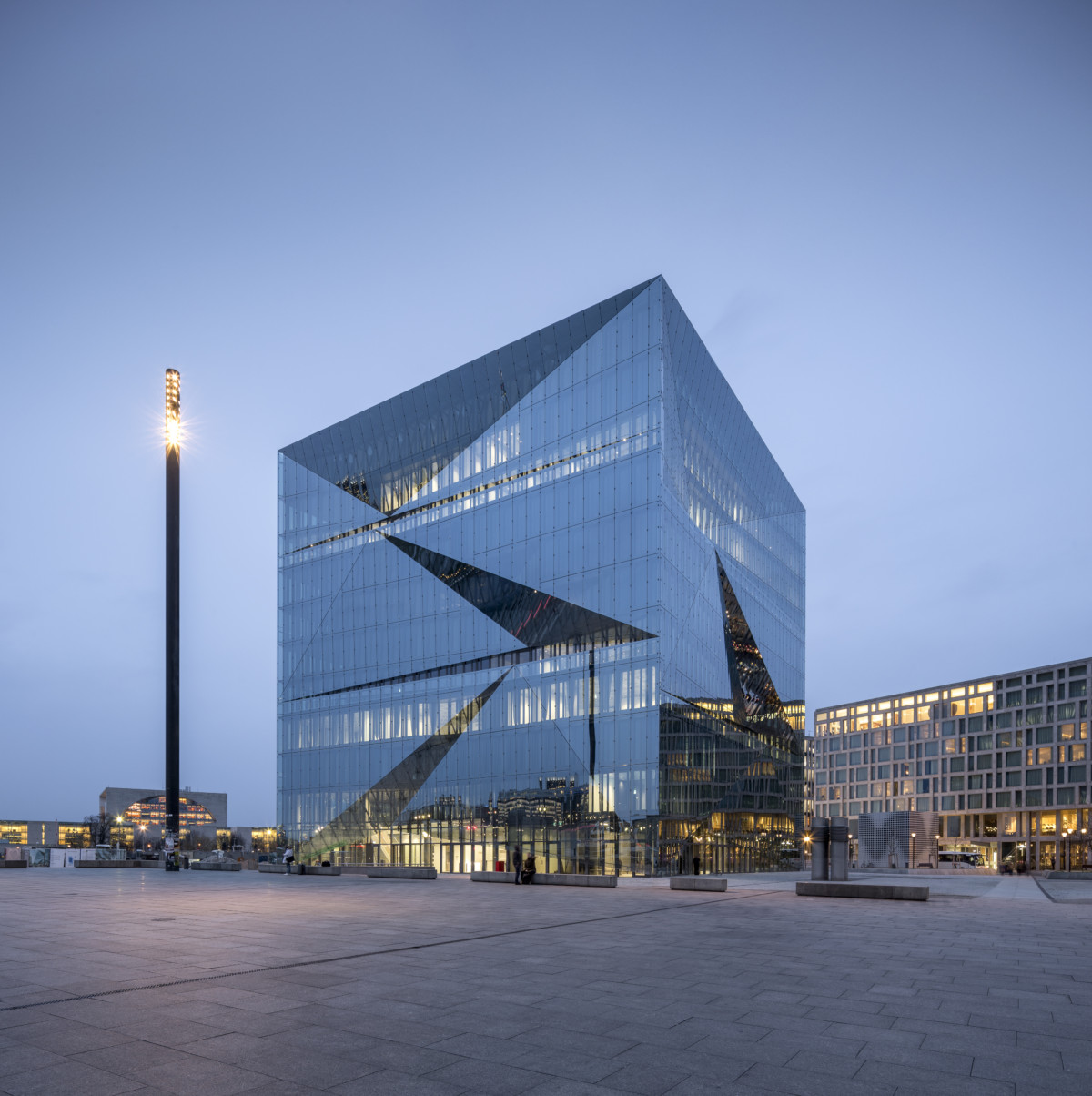 <
►
>
Packing beauty, brains, and brawn into a single sculptural body with a layered skin that further animates its bustling environs, cube berlin demonstrates that it’s hip to be square in the German capital city. (Adam Mørk/Courtesy 3XN)

Resembling both a cartoonishly large paperweight and a monumental mirror, cube berlin doesn’t look the part of a typical office building. The new 62,300-square-foot building forcefully anchors Washingtonplatz, a stone’s throw from Berlin’s central train station, and dazzles passersby with its fully glazed, double-skin facade, all while coyly concealing its true function.

“For many people traveling to Berlin, cube berlin will be the first thing they see, so [we thought] it should evoke an ‘OK, I have arrived’ feeling. And for Berliners, it’s a landmark addition to the existing skyline,” explained Torben Østergaard, a partner at Copenhagen-headquartered firm 3XN, cube berlin’s lead architect. The project, completed earlier this year, is the shiny centerpiece of Berlin’s Europacity redevelopment scheme—emphasis on shiny. “The design lies in the interaction and dynamic experience of light, movement, and reflections of the city,” Østergaard added.

That dynamism is the result of marrying glass to a surgical massing strategy, which subjected a ten-story cube to a series of wild nips and tucks. In plan, these triangular cavities produce pinched floorplates, while in section, they create staggered terraces open to the sky. The volumetric cuts angle reflective glass onto reflective glass, revealing pockets of light, color, and depth that turn every elevation into “a giant relief,” Østergaard suggested.

“The reflective character of glass—in particular the type of glass used for the outer skin—emphasizes the relief and provides an effect similar to an enormous kaleidoscope,” Østergaard elaborated, betraying the architects’ ambition to create an “interactive sculpture” rather than “just another office building.”

Michigan-headquartered Guardian Glass supplied three different glass products for the project, which was originally conceived as the winning design for the new head offices of national railway company Deutsche Bahn. Notably, the breathable facade features solar-control glass that improves energy efficiency—one of several technologies that work together to elevate comfort, convenience, and usability levels for workers while minimizing the building’s environmental impact.

Packing beauty, brains, and brawn into a single sculptural body with a layered skin that further animates its bustling environs, cube berlin demonstrates that it’s hip to be square in the German capital city.