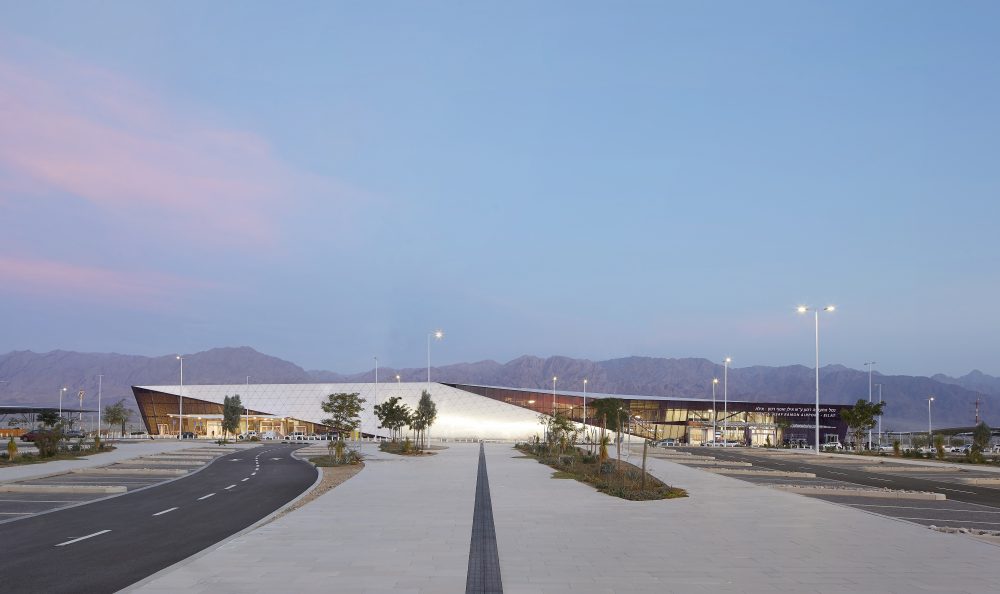 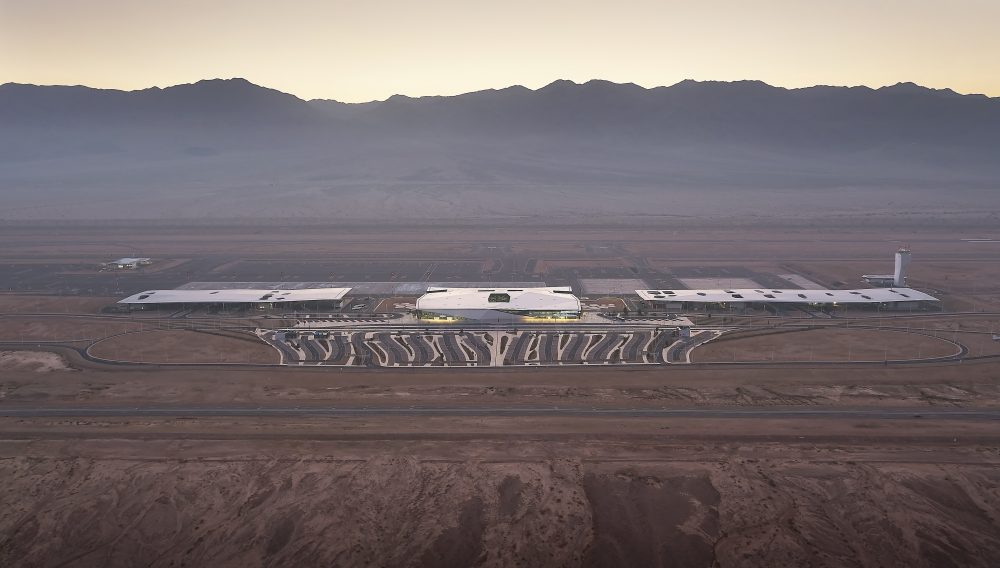 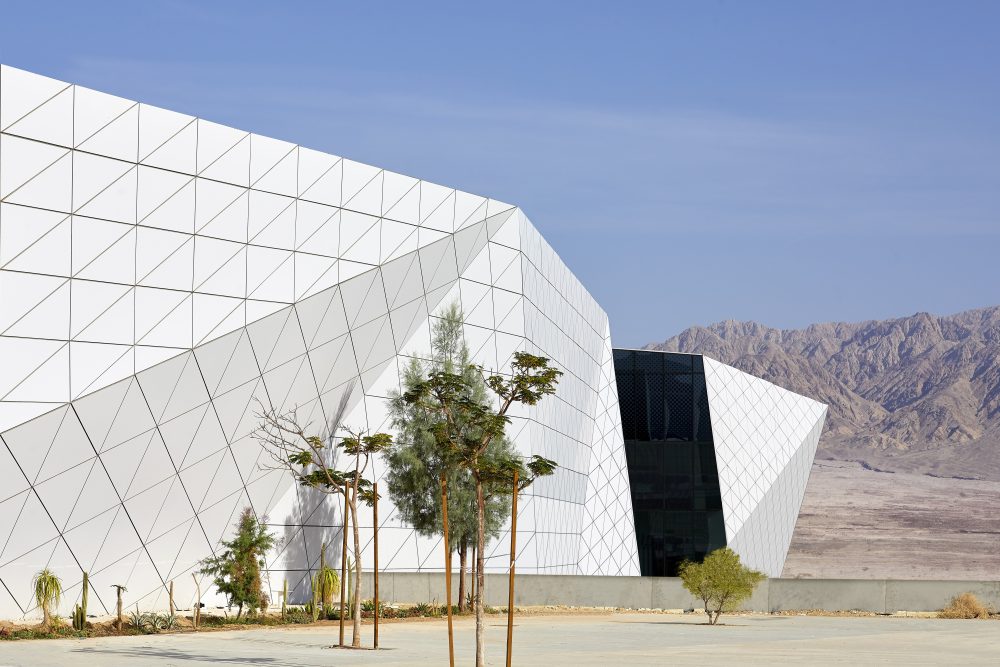 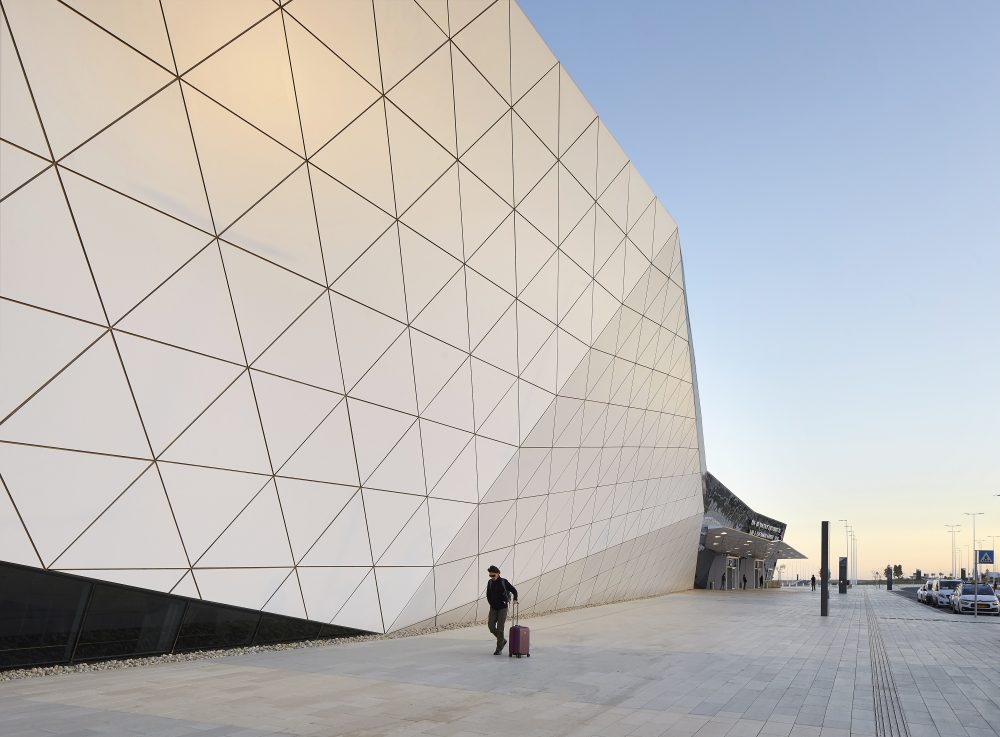 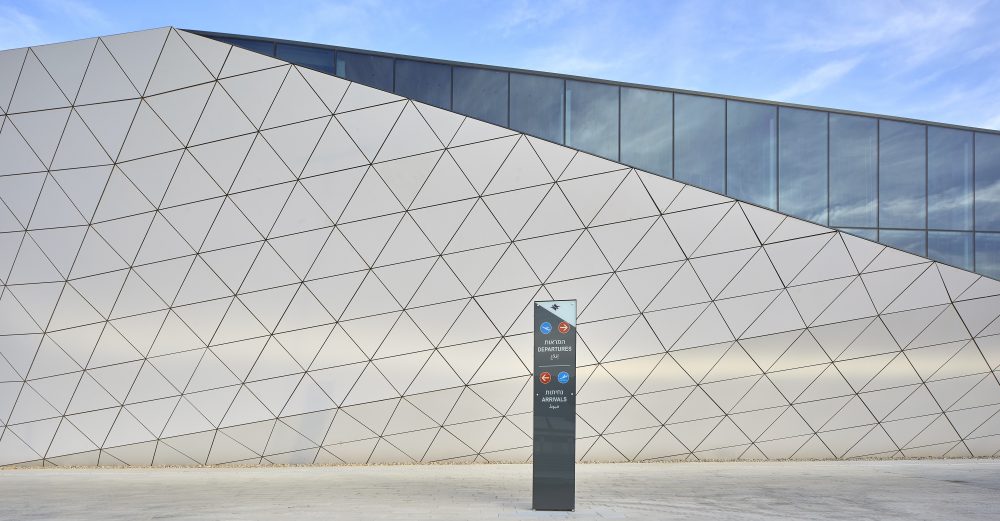 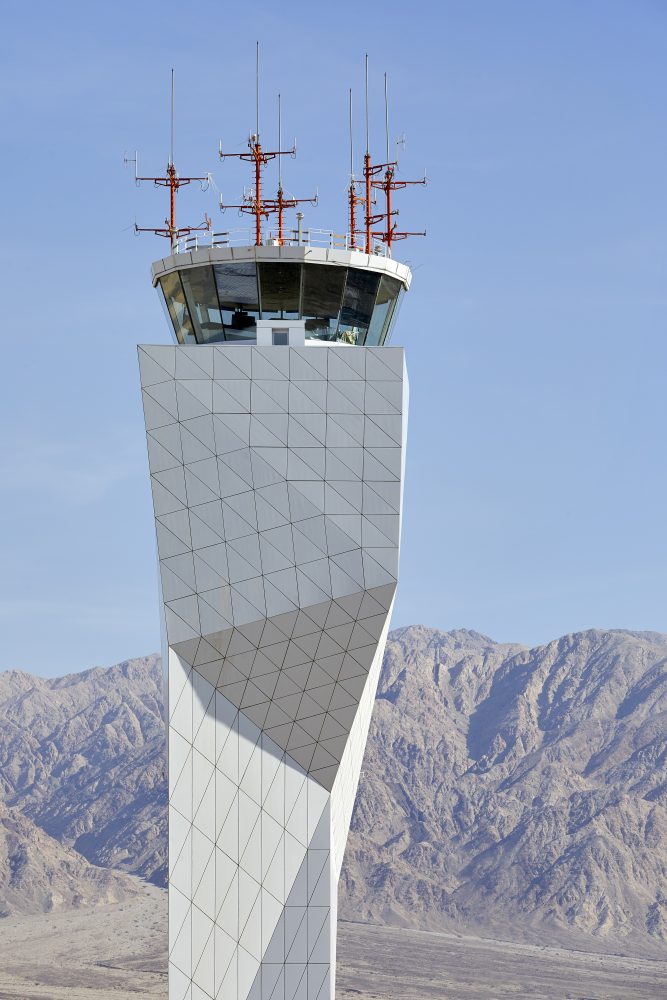 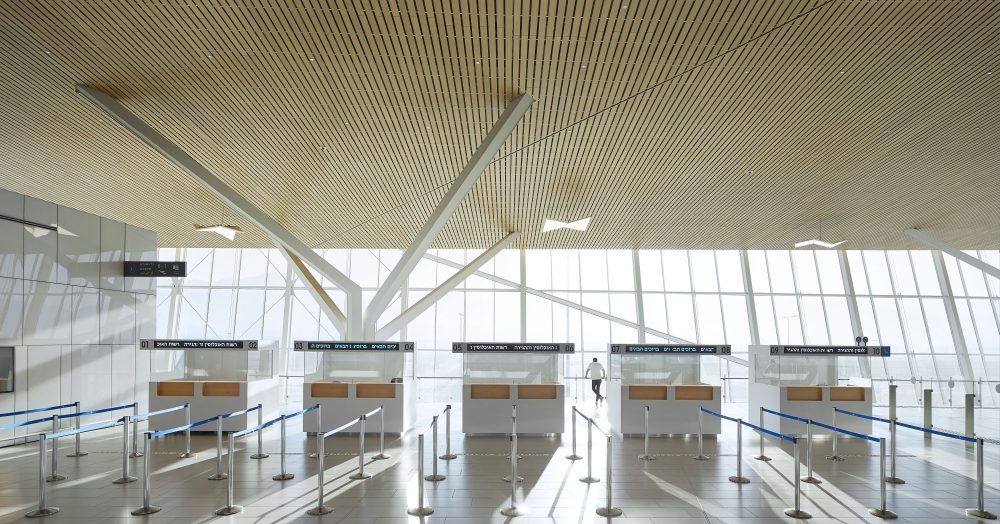 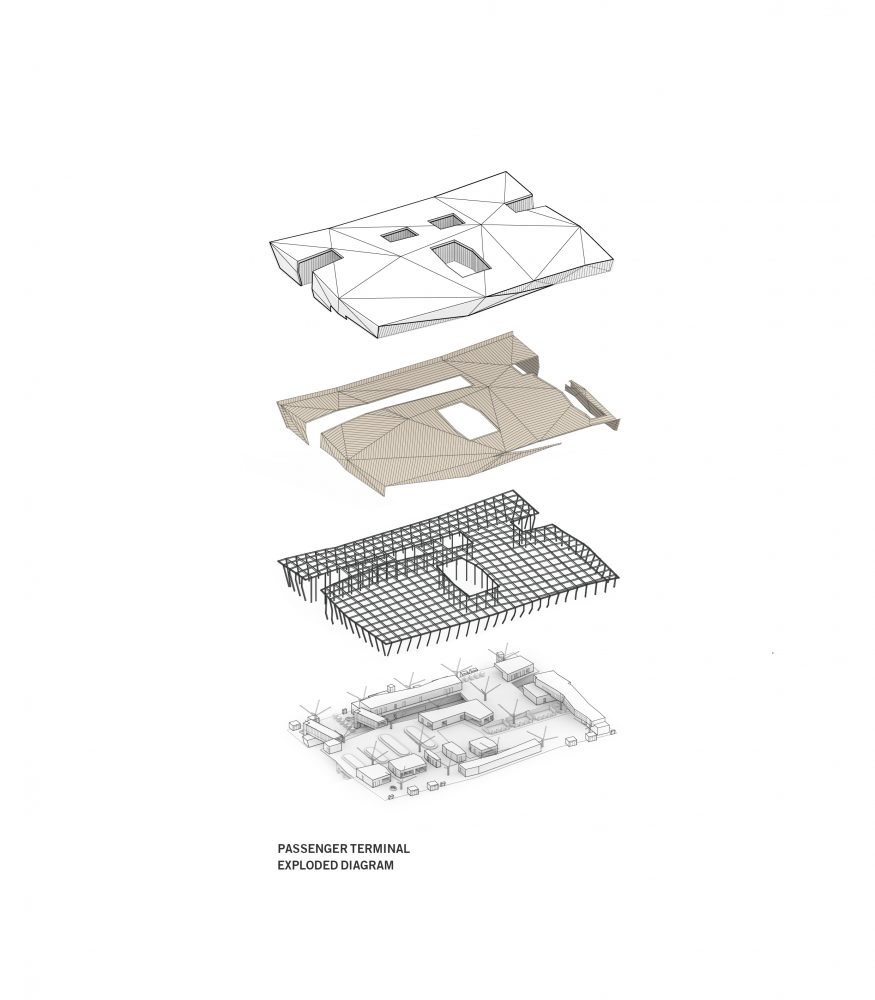 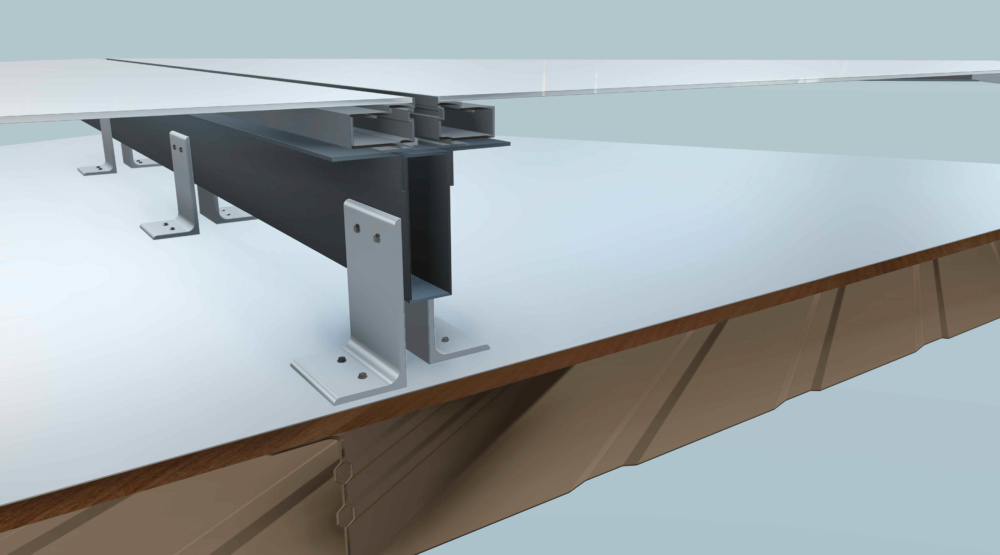 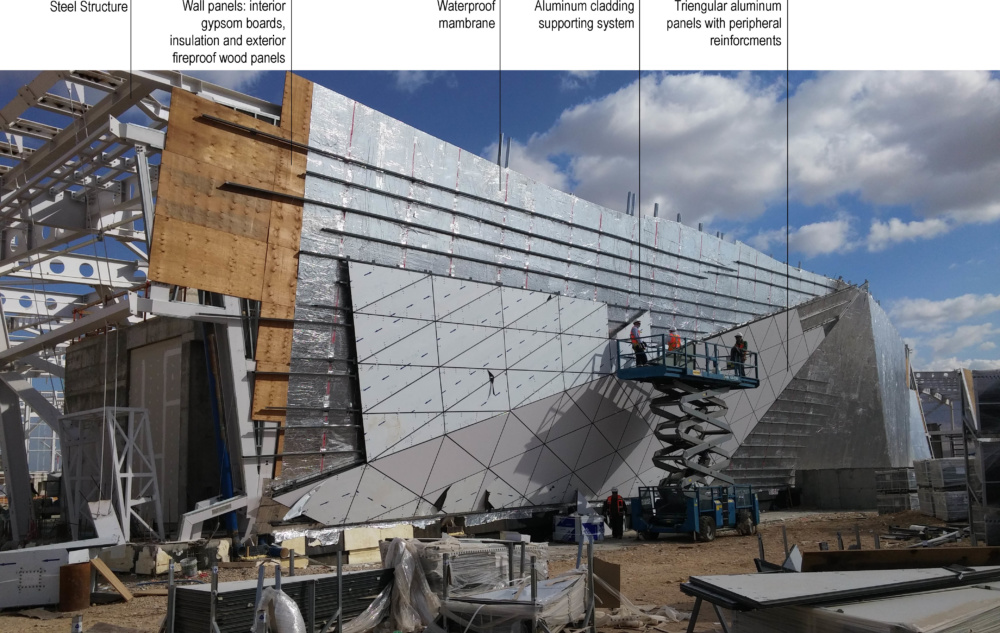 In Israel’s Negev Desert, a faceted mass has risen in the shroud of the Eilat Mountains. Designed by Amir Mann / Ami Shinar Architects and Planners, and Moshe Zur Architects, the Ramon International Airport is clad in large aluminum composite panels.

Opened in January 2019, the principal terminal building of the airport measures nearly 500,000 square feet and replaces Eilat’s preexisting airport located in the center of the city.

While the tabula rasa-like setting of the desert allowed for a number of formal possibilities, the bareness of the surrounding landscape visually heightens subtle facade elements. The design team looked to the mushroom-like rock formations found in the adjacent Timna Park when shaping the building’s mass, but the final form was driven by more than just aesthetics. The aluminum walls rise and double-over themselves as self-shading devices. “The slanting-out facades of the Terminal shade the building itself, while the cutting-edge aluminum panels, which insulate, help to reflect the UV rays through their pristine white coloring,” said Amir Mann.

After the initial form of the airport was decided on, the design team used parametric software to determine the dimensions of cladding elements—the largest is just over seven feet wide. The sheer size of the panels and their irregular shape required the use of reinforcements along their edges, which were then fastened to a supporting system of aluminum profiles.

Project execution in the middle of the desert is no easy feat, and the design team had to develop and utilize multiple methods of delivery and construction. “The structural steelwork and cladding systems were produced off-site to minimize the amount of on-site welding that had to take place in the desert temperatures,” said Mann. “Also, casting the concrete for the building’s skeleton and the Airplane Aprons was done overnight, taking extra care to avoid damage and cracking of concrete due to the extreme range of temperatures between night and day.”

Throughout the design process, the architectural team collaborated closely with Skycon, the manufacturer and installer. While producing both the aluminum cladding and glass curtain walls, the fabricators built full-scale mockups of different building elements so the design team could refine certain details prior to installation.