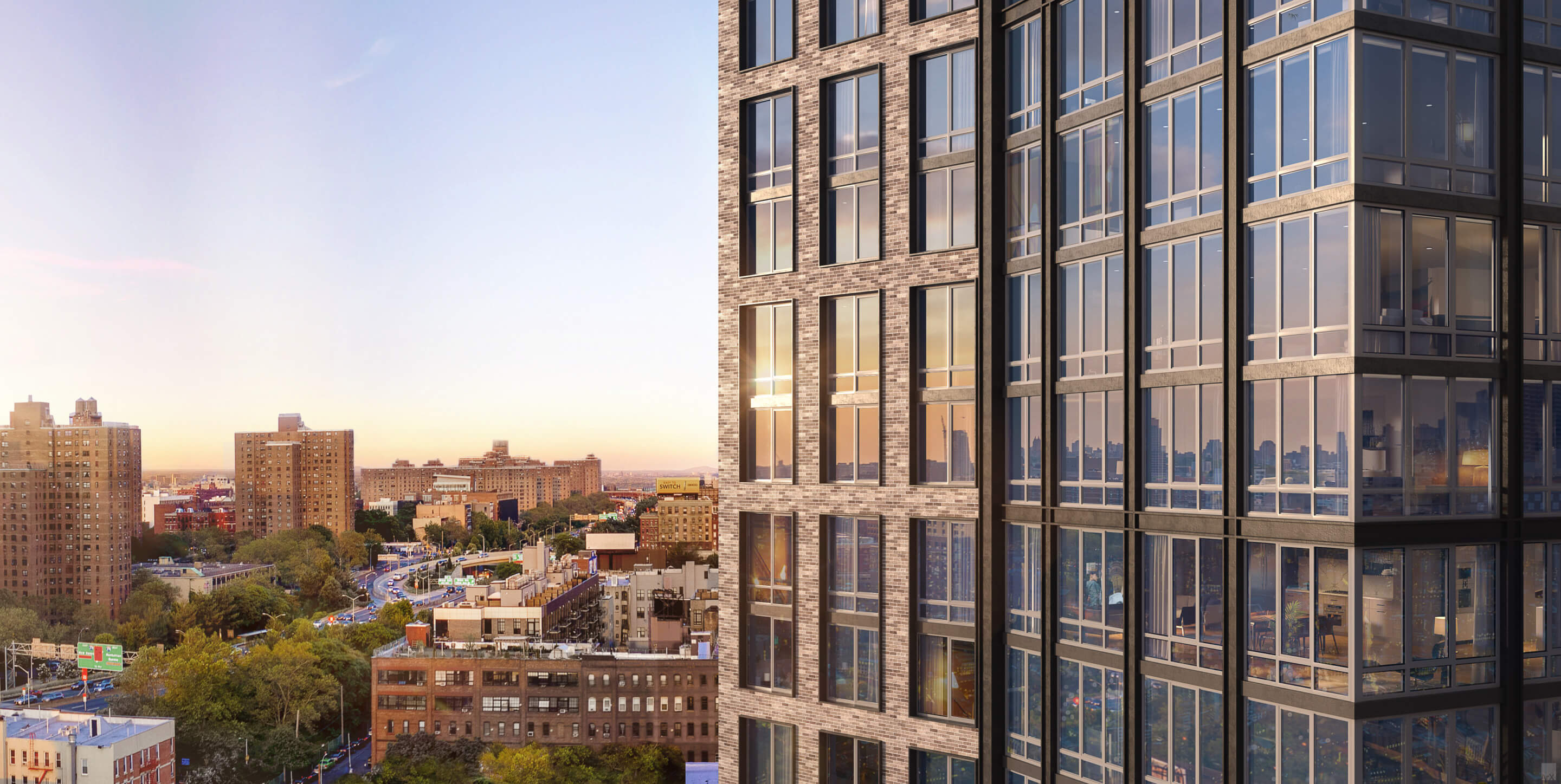 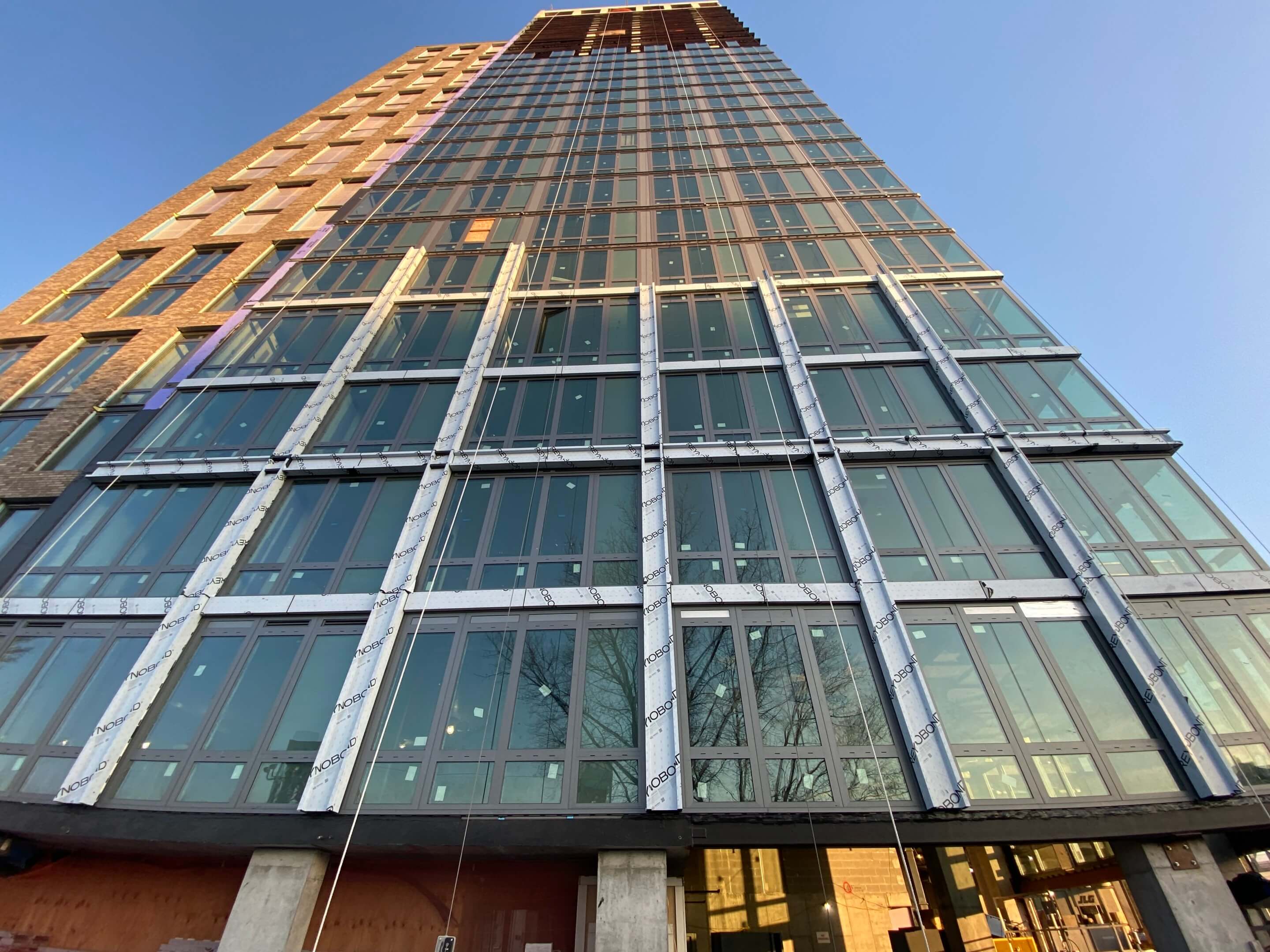 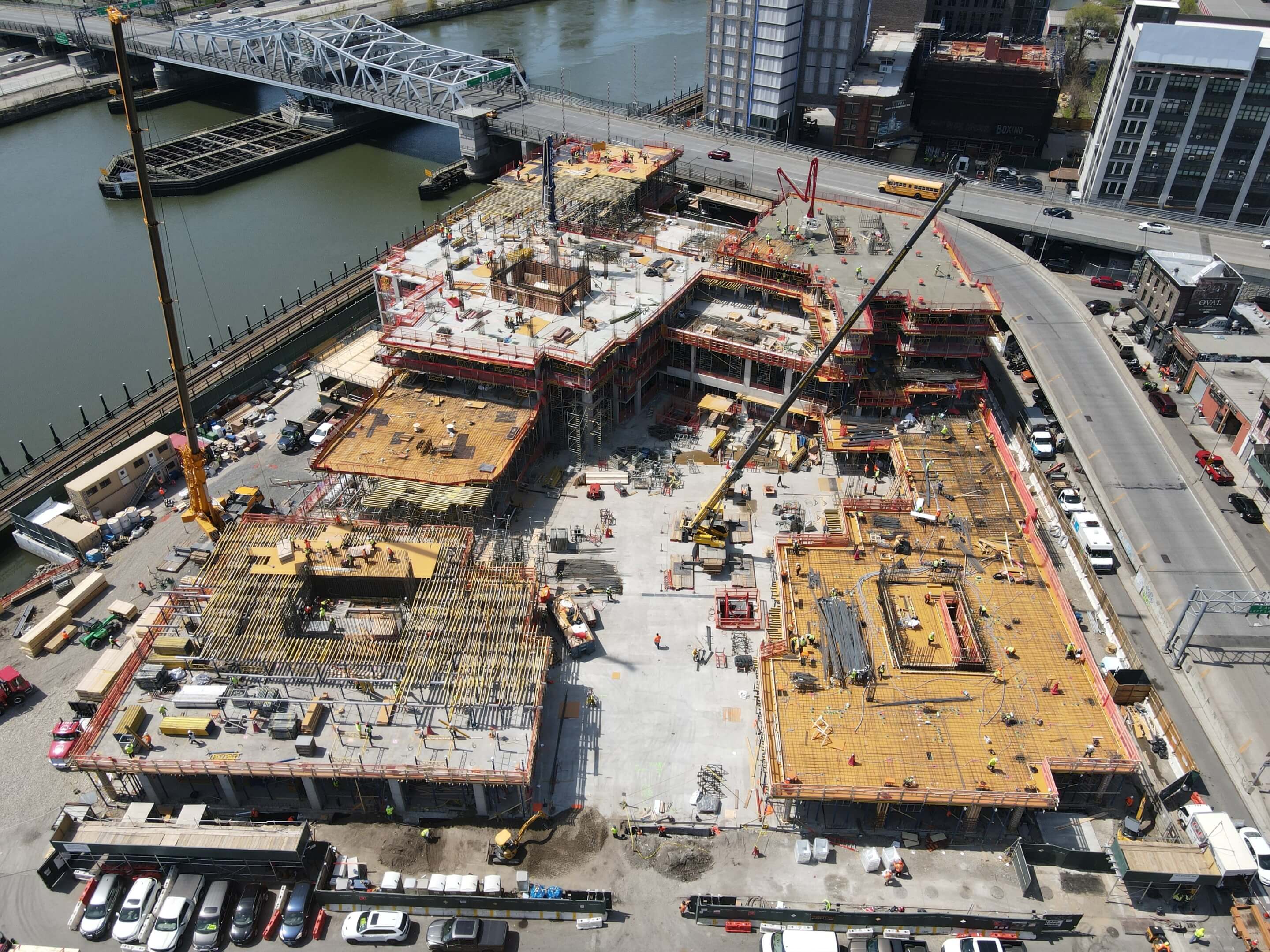 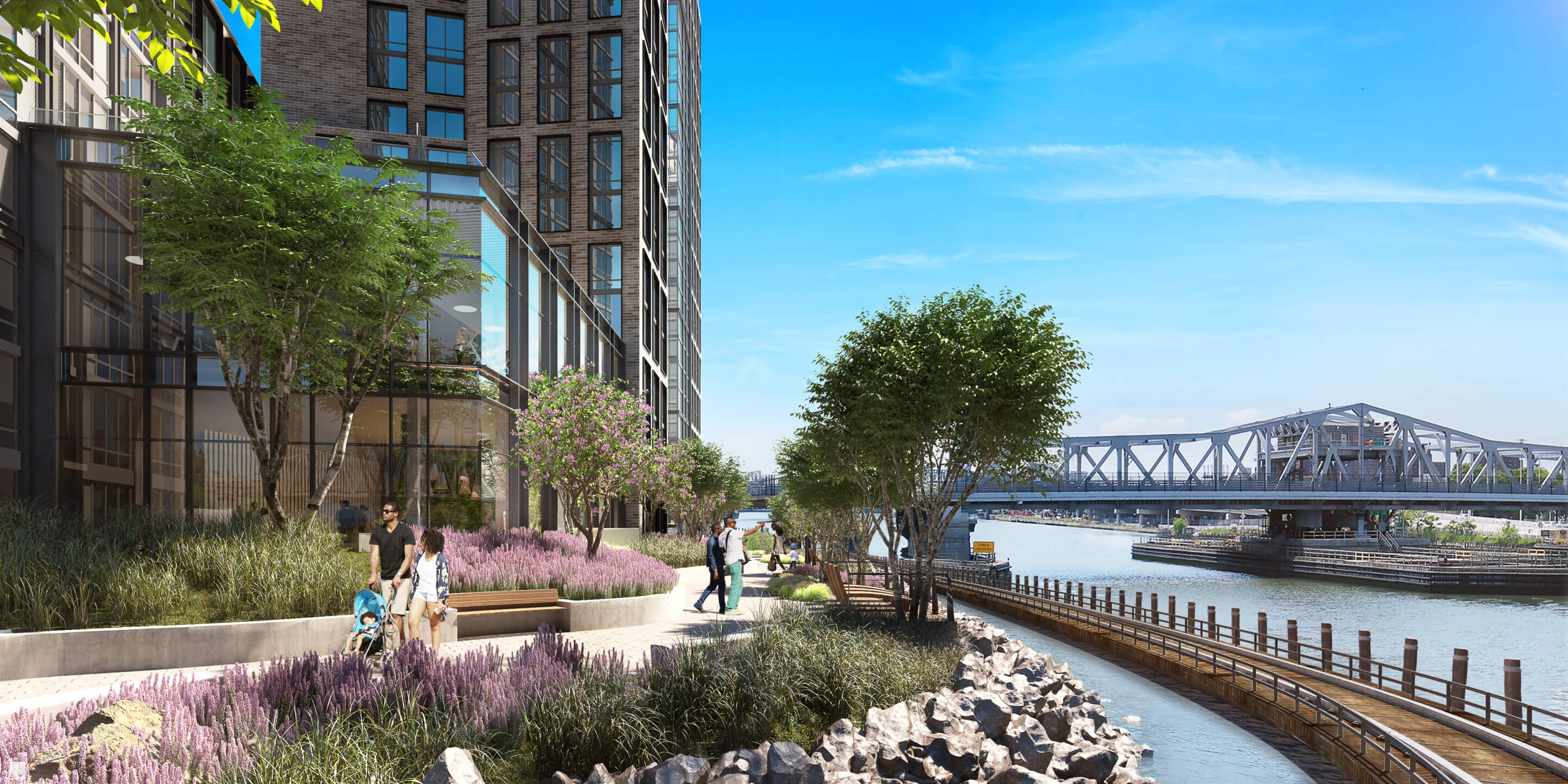 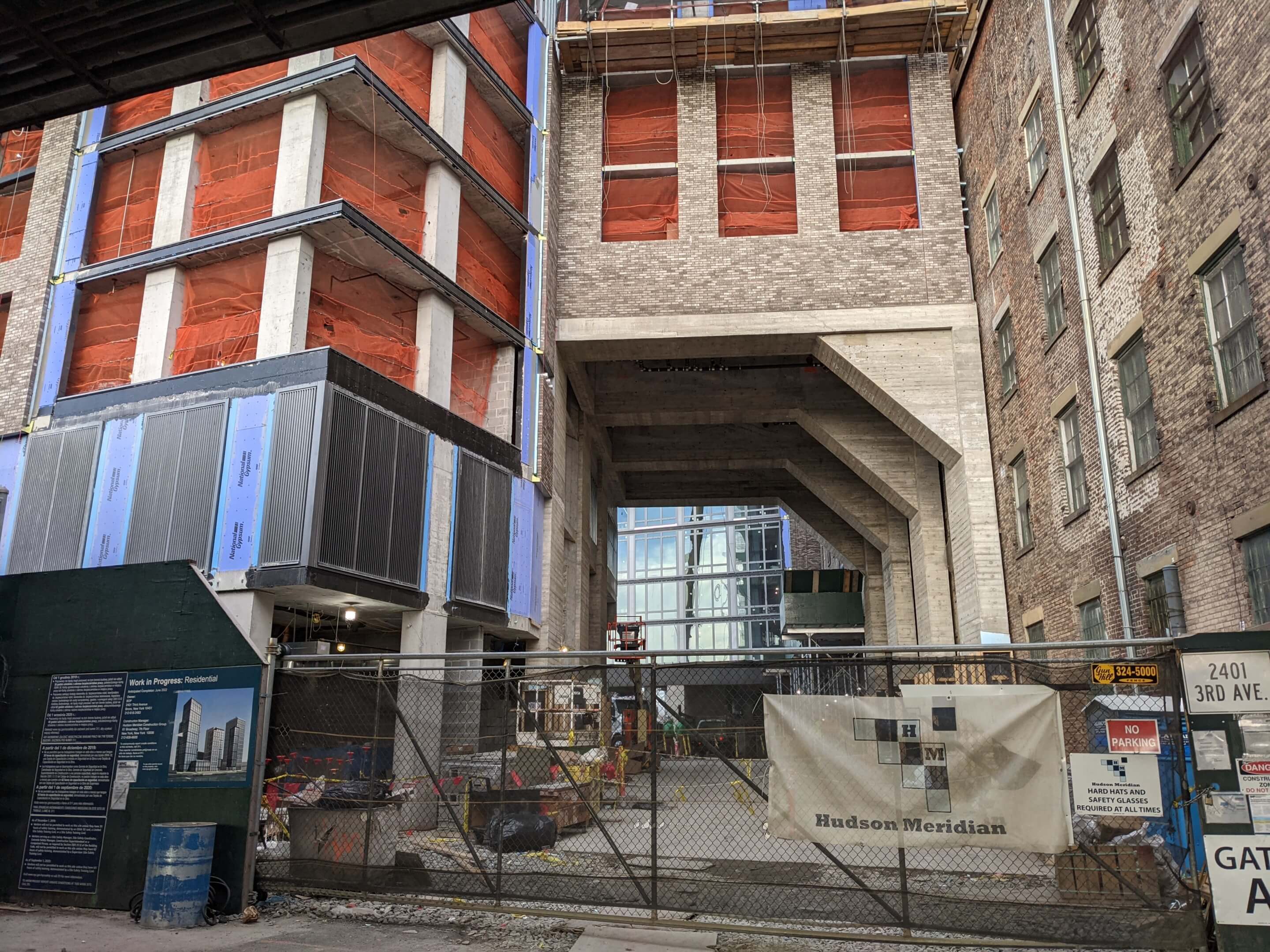 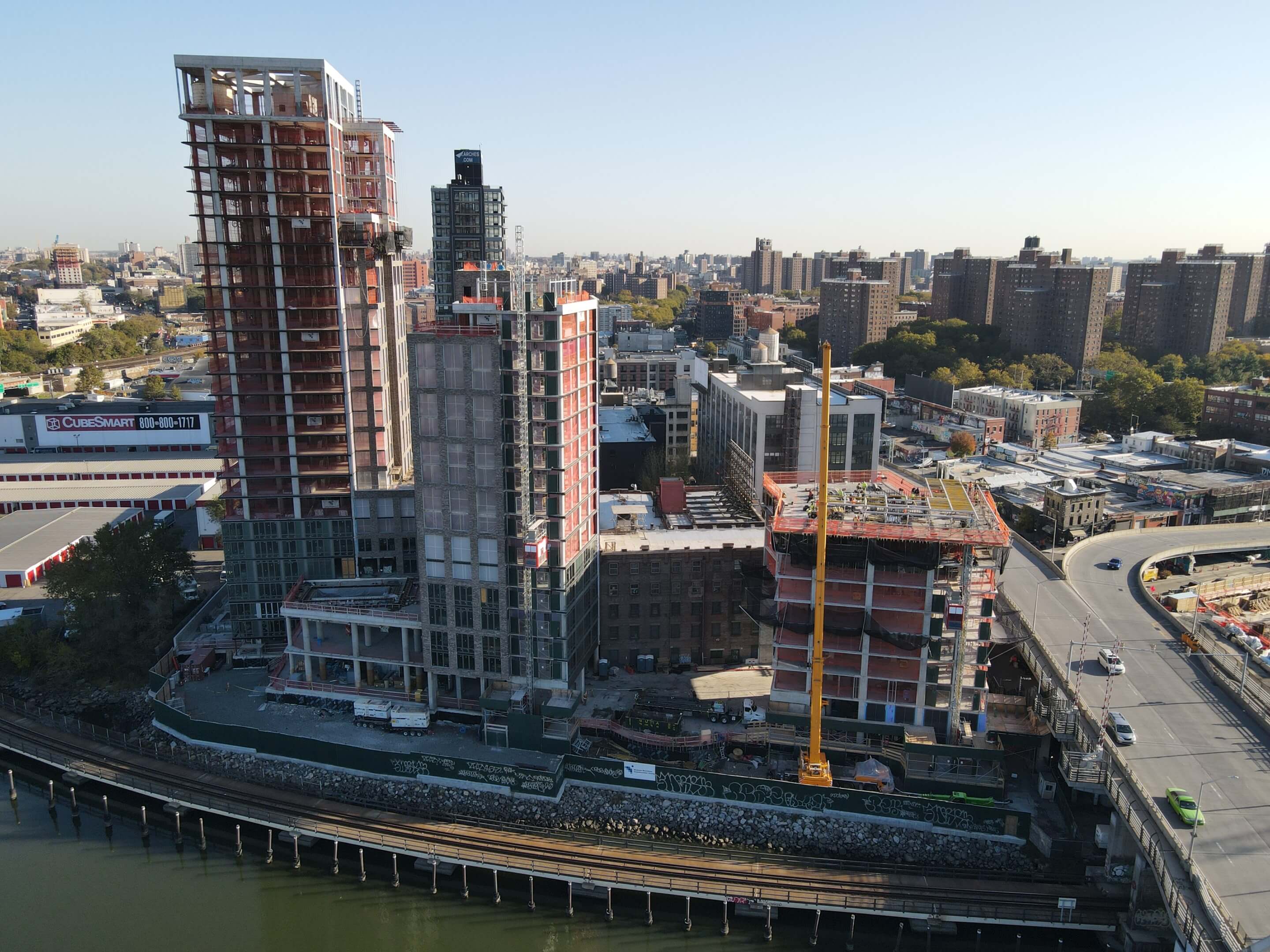 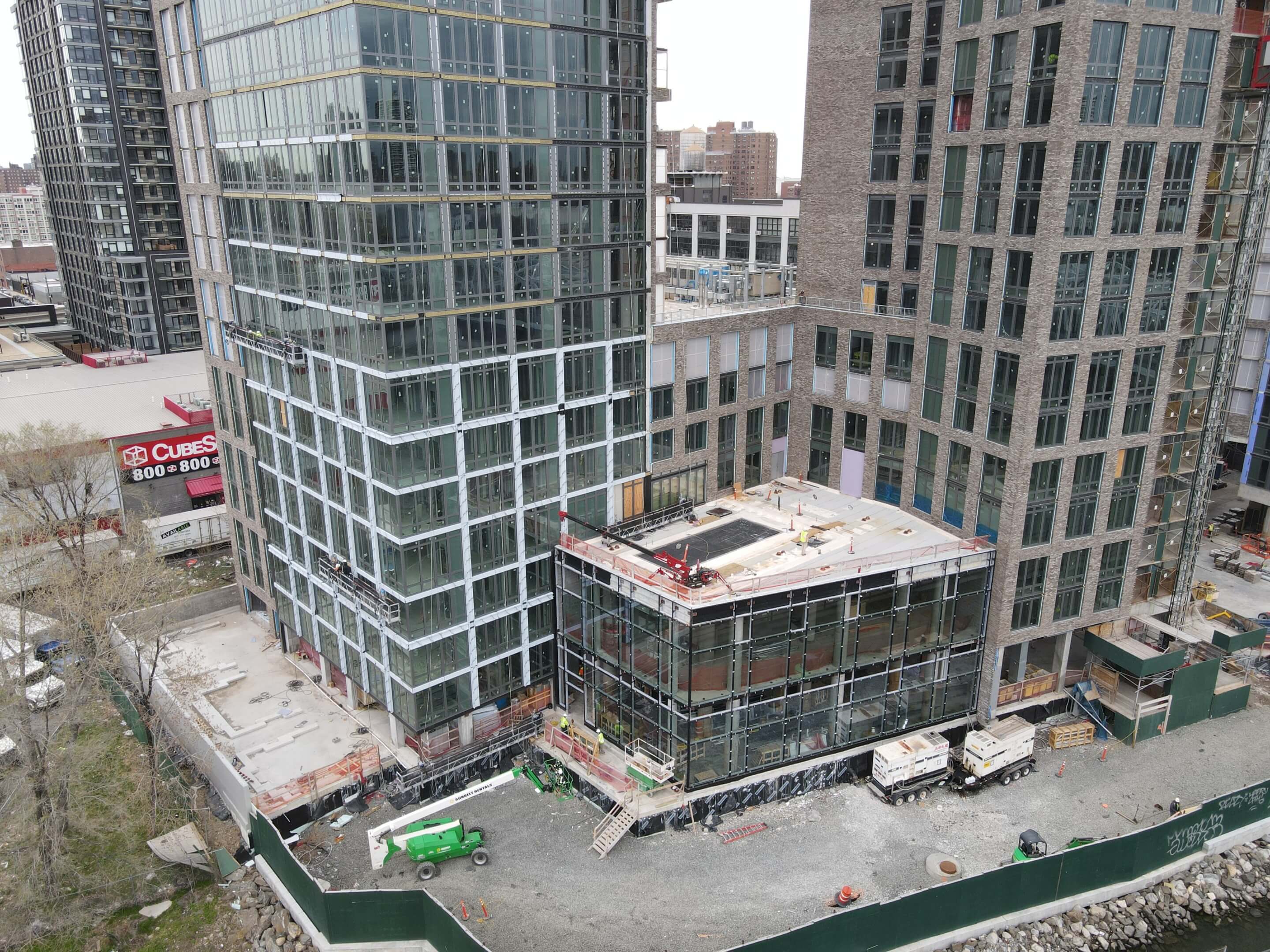 <
►
>
Rendering of four of the seven towers from the Manhattan side of the Harlem River, bifurcated by the 3rd Avenue Bridge (Courtesy Hill West Architects)

Seven massive residential towers are beginning to steadily rise along the waterfront of the Mott Haven community in the South Bronx, New York. Designed by Hill West Architects, the residential complex known as Bankside is actually two sites that are bifurcated by the Third Avenue Bridge. New York City has more than 520 miles of waterfront—more than Miami, San Francisco, and Los Angeles combined. The master plan of this mixed-use development will create a public waterfront park, open an

esplanade that hasn’t been accessible for more than a century, as well as community facility space. Of the 1,350 apartments, 30 percent will be made affordable through the Affordable Housing New York program. With the first phase of construction nearly complete, the first batch of apartments is scheduled to open in December 2021.

The seven towers feature two distinct facade types: One with weathered masonry and another with dark metal accents and generous glazing to reflect the light manufacturing and heavy masonry history of the site. Hill West strove to touch on this context but also included glassy corners and unique interior apertures to lighten these elements and impart a timeless design, a necessary move given the project’s scale. At the north site, 2401 Third Avenue, the glazing is a window wall manufactured by Alubon whereas on the south site, 101 Lexington, a combination window wall and curtain wall system manufactured and installed by Fabbrica was used. The south site towers’ glazed unitized systems vary between 24 and 52 inches in width.

Originally, the south site was designed to use a window wall system. However through an extensive design-assist process, Hill West was able to work with the manufacturer, Fabbrica to incorporate a curtain wall system that would allow for the envelope to be completed more efficiently and quickly. Across the complex, the total amount of glazed surface area came to a total of 304,813 square feet.

“The most challenging aspects of Bankside,” said Alkis Klimathianos, director of design at Hill West, “also provided the greatest opportunities for us to design, with great support and encouragement from Brookfield Properties, some of the most unique and special architectural moments.” In addition to being uniquely adjacent to both the waterfront and Third Avenue bridge, the site also abuts the existing “Piano Building” along the shared courtyard. If you approach by car, along the cobblestone paved access area, the historic brick is slowly revealed with careful consideration to prevent any erasure of its exposure.

Hill West is primarily known for its multifamily housing and residential design. “We don’t look at the building as an object only,” expanded Klimathianos. “Especially for residential, the most important factor is how you experience the building from the ground… that experiential approach drives our residential design. Not to say that the aesthetics of a building aren’t important, they’re hugely important – how a building sits in the city, what kind of a symbol it creates…but that can’t be devoid from who is using and why they’re using this building. Buildings are about bringing people together.”

The complex is one of the largest private investments ever undertaken in the Bronx and is anticipated to be fully complete in early 2022.