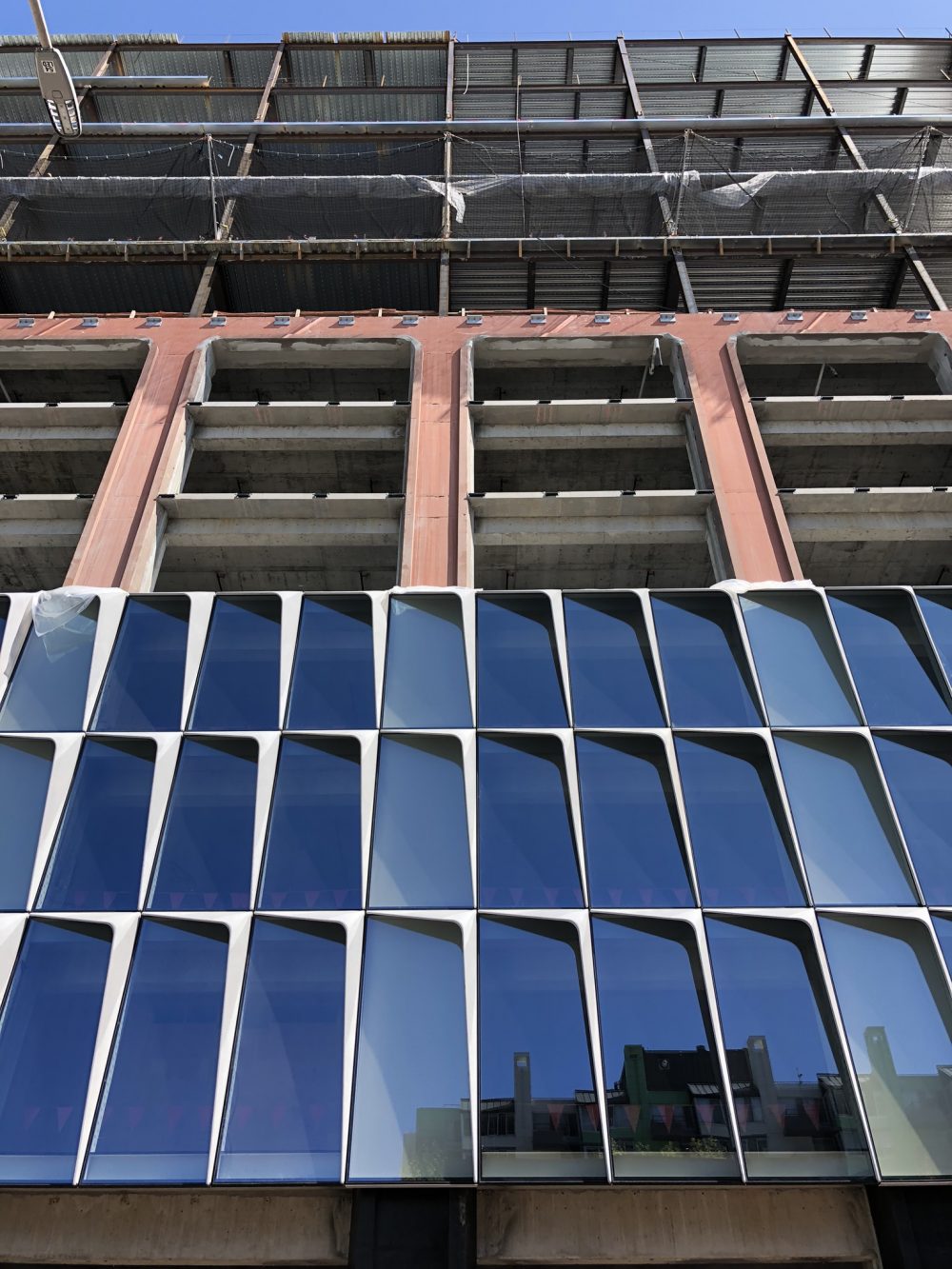 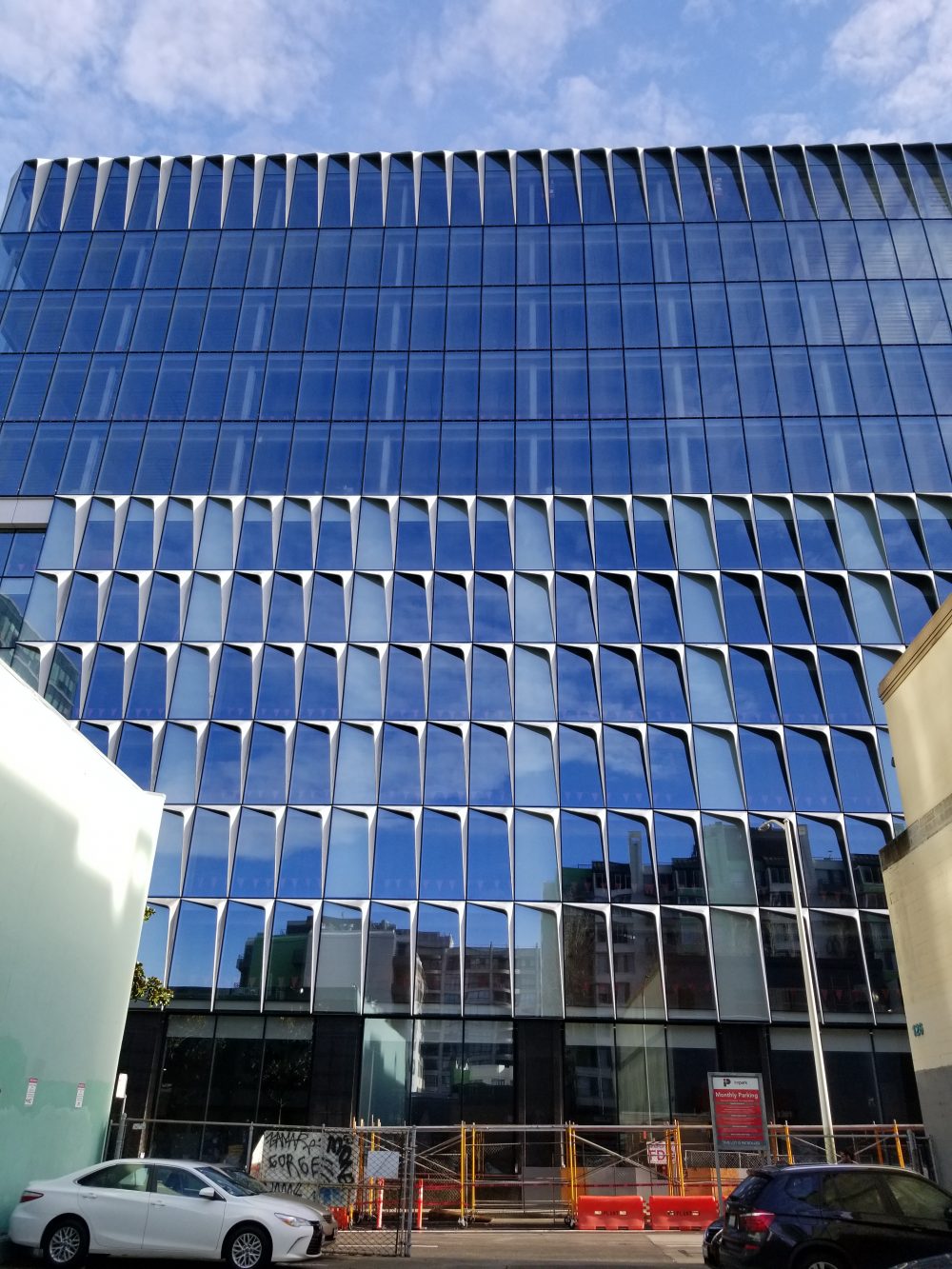 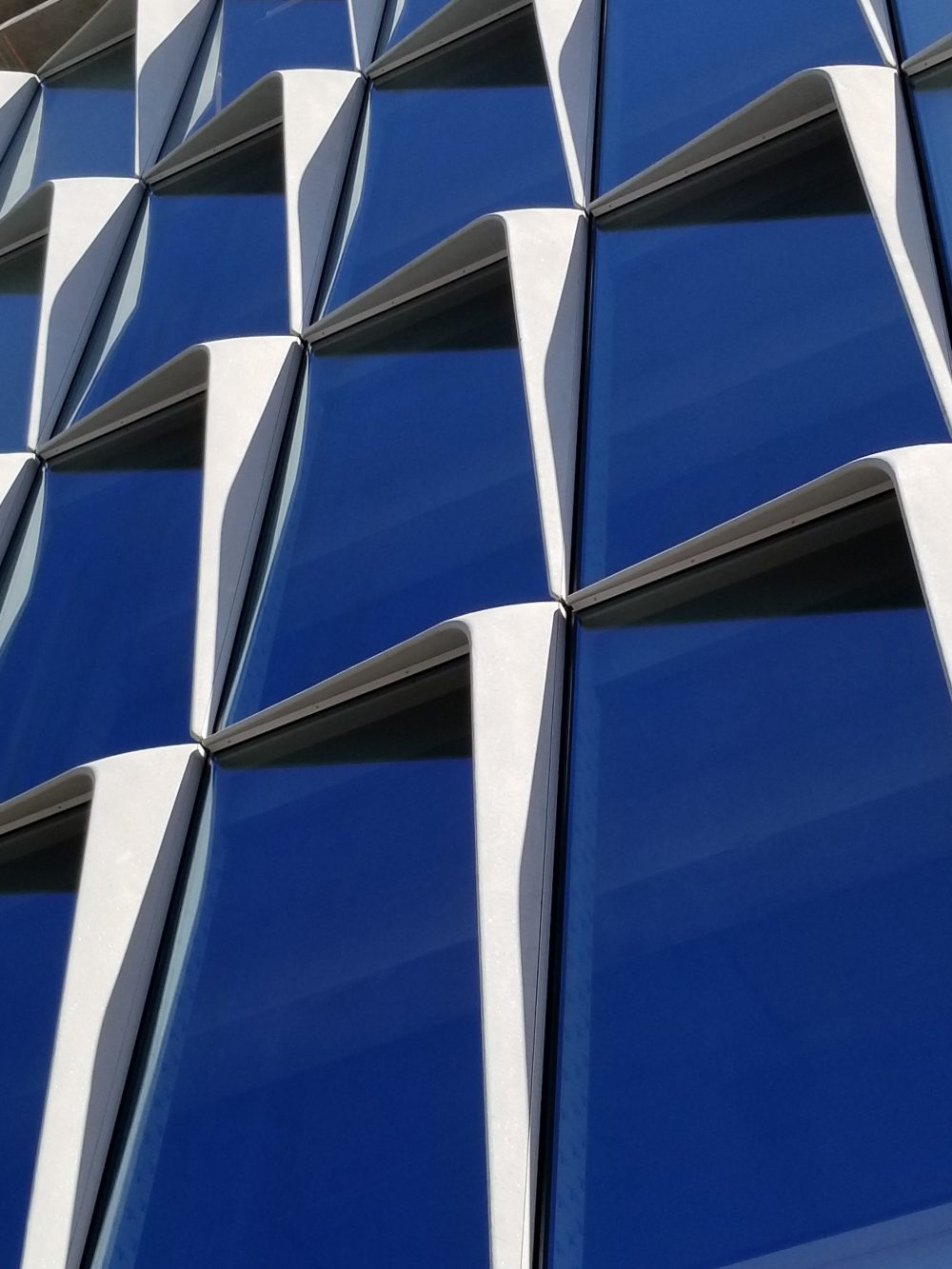 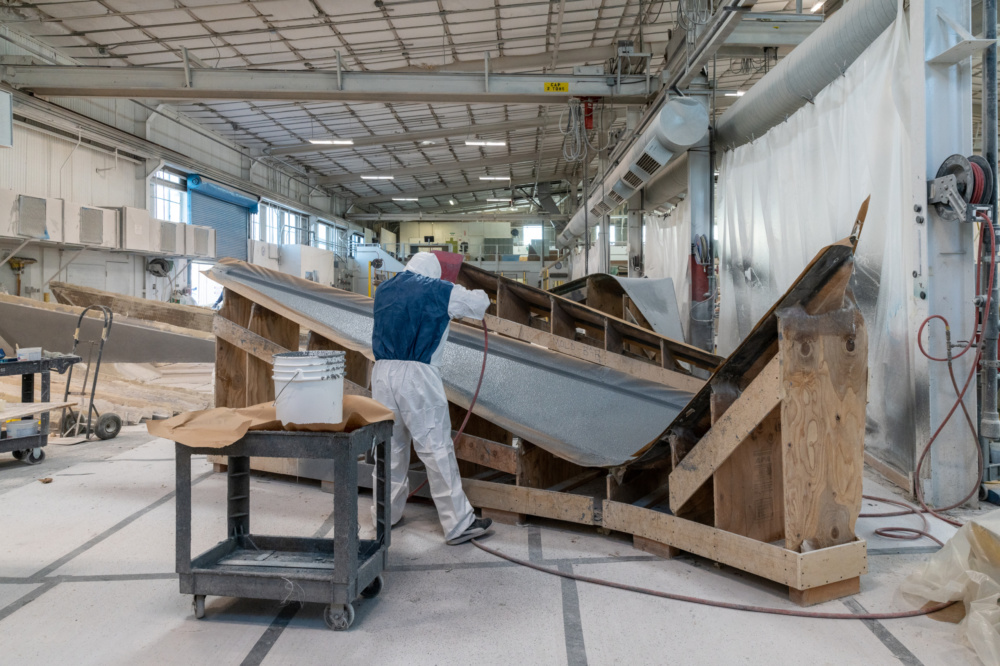 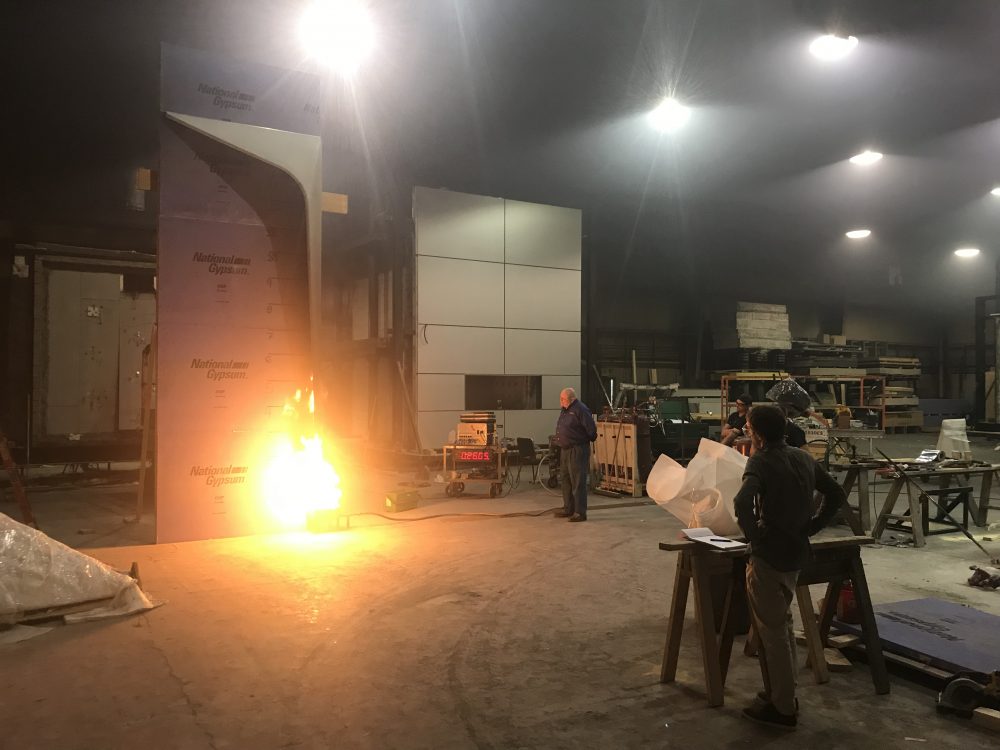 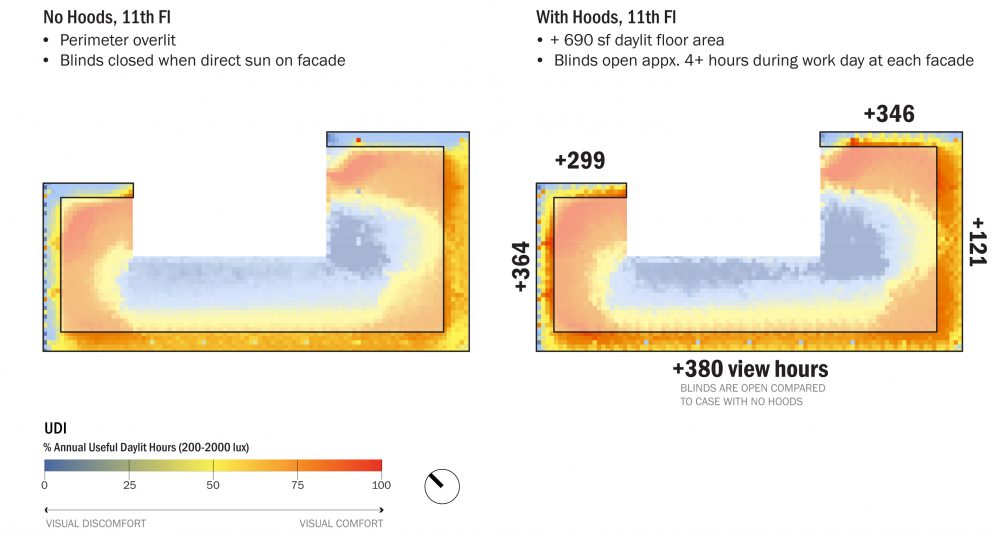 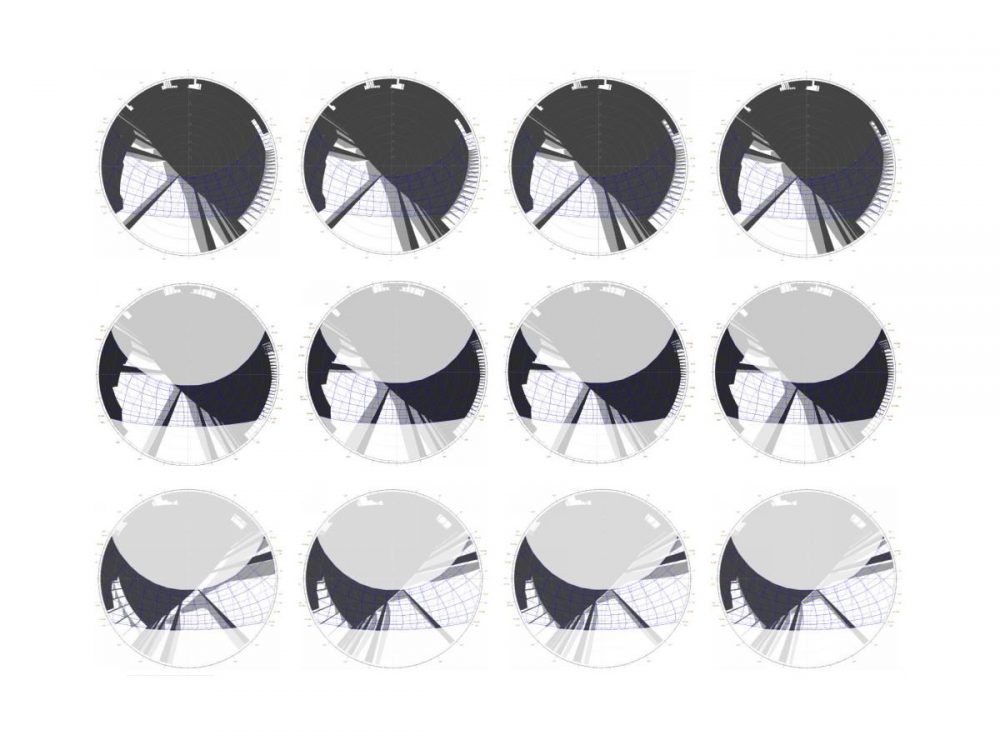 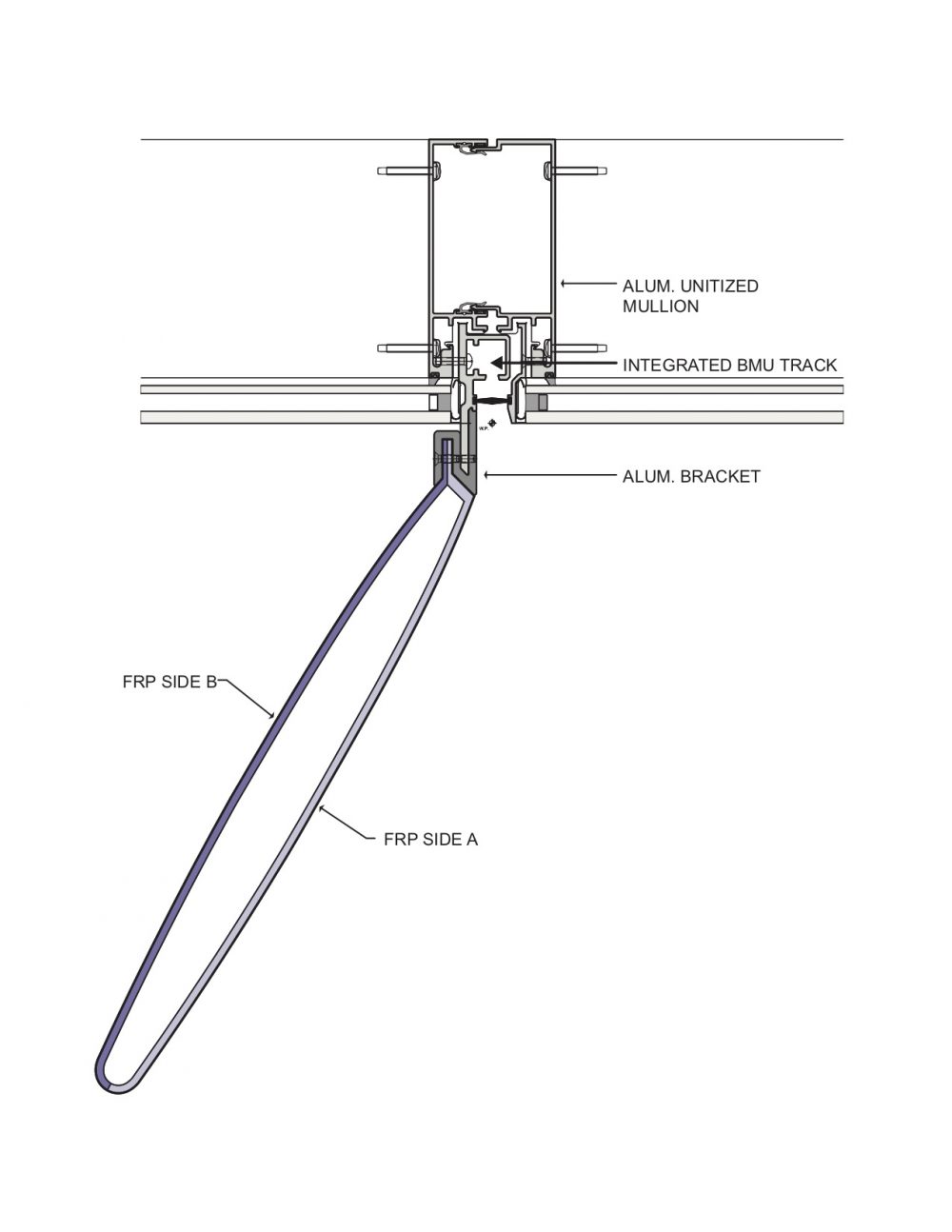 <
►
>
The installed curtain wall units viewed from the west. By virtue of the unitized system’s design, the hoods could be attached at a later point. (Courtesy Permasteelisa)

As the decades roll on, public appreciation of post-war office buildings continues to wane, and owners are often stuck with a depreciating asset with poor energy performance to boot. The usual course of action is wholesale demolition and the construction of an entirely new structure on the site. In contrast, a design team consisting of Gensler, facade consultant WJE, environmental consultant Atelier Ten, and facade fabricator and installer Permasteelisa, provides a compelling case for retrofit in the expansion and reclad of 633 Folsom, in San Francisco’s South Market, with a unitized glass curtain wall, and fiber-reinforced polymer sunshades (FRP).

Developed in 1967 by real estate investor The Swig Company, who are also the present owners, 633 Folsom was originally a poured-in-place concrete structure with deep inset glazing bays located between structural piers. On top of poor daylighting, the office building rested atop a raised podium that set the lobby and ground floor retail space back from the street wall.

The retrofit of the office building was extensive, adding five floors to the northeast half of the structure to boost the overall square footage to over 270,000 square feet. This was a challenge from a structural standpoint, and specific construction measures included the cutting of a temporary atrium through the existing floor slabs for the insertion of an enlarged core with elevators. Additionally, to handle the load of the new addition, a new mat slab was poured at the foundation, and an array of micro piles were drilled and columns and footings were widened.

Cladding for the retrofit responded to the building’s retained exoskeleton, and the choice of FRP sunshades struck a balance between aesthetics and constructibility. One distinctive factor was “input from our wind consultant that FRP’s material properties would dampen wind-induced vibration, whereas other materials were at high-enough risk of vibration that iterations of wind tunnel tests may have been required,” said Gensler senior associate and technical director Brent Van Gunten. “The forming process of FRP also affording significant flexibility in adjusting form to meet solar angles and design priorities.”

Gensler collaborated extensively with Atelier Ten to develop the ideal balance between shading, visibility, and environmental performance. Their team went beyond the typical approach of abstract daylight access across the floor plate, and instead analyzed glare across individual workspaces utilizing digital models for daylight autonomy.

For the sunshades, the design team turned to California-based manufacturer Kreysler & Associates who specialize in FRP production. In total, there are just under 680 hoods, all six feet wide, and are gradated in depth from 1′ 2″ inches at the second floor to 2’2″ at the twelfth floor—there are 16 different forms found across the project.

Following production, each FRP hood was transported to the site and attached to each curtain wall module of AGC Interpane insulated glazing units. According to Permasteelisa North America project manager Andrew Harmon, the fabricator and installer collaborated with Gensler and Kreysler & Associates to develop an extruded “Z”-shaped aluminum adapter pre-attached to the hoods during production. “On the job site, Permasteelisa secured the FRP with its adapter to the specially-designed aluminum fins on the curtain wall frame with set screws before installing the units onto the building,” said Harmon. “The FRP hoods can be accessed and removed from the exterior, if necessary, without disturbing the integrity of the building’s envelope or impact its overall performance.”

The southwestern portion of the building was reclad with new glazing and aluminum panels, and was tied to a facade system that conformed with the existing profiled columns. The design team developed a custom rain screen system that accommodated the breadth of aluminum panel widths while minimizing the size of structural members.