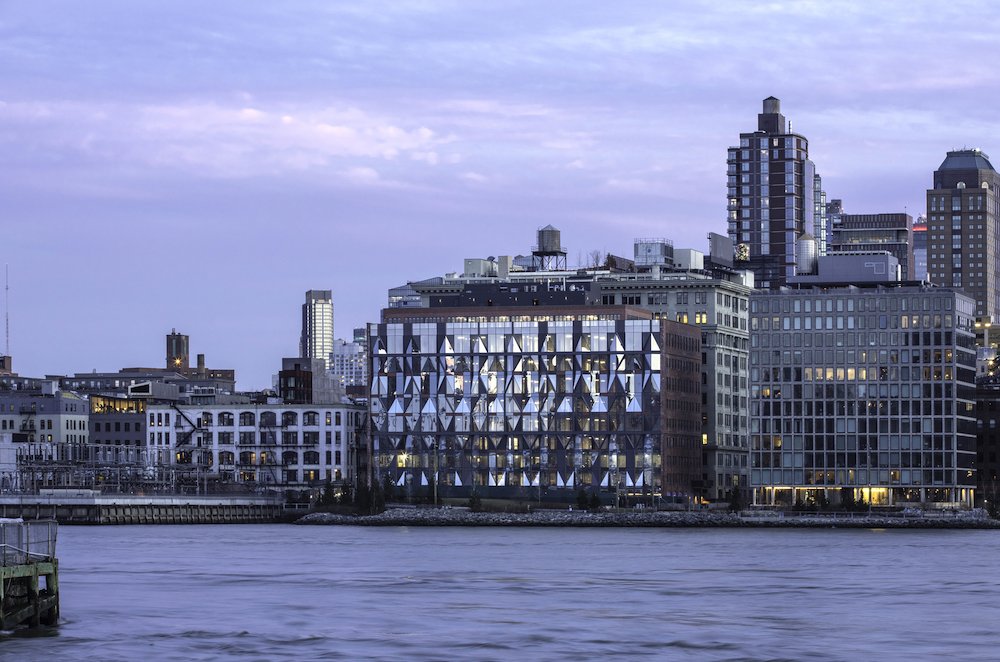 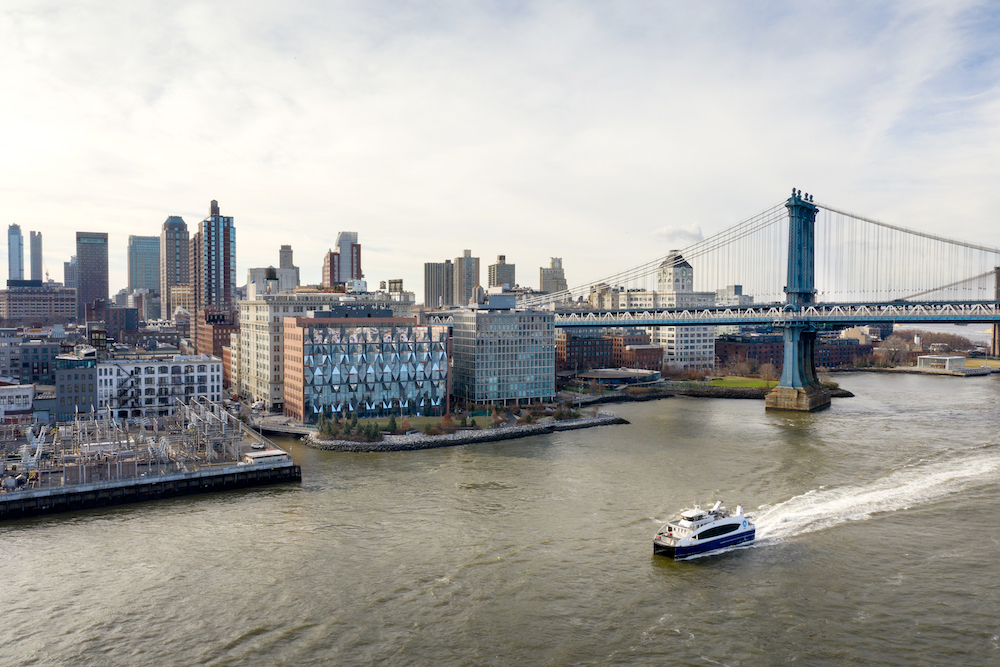 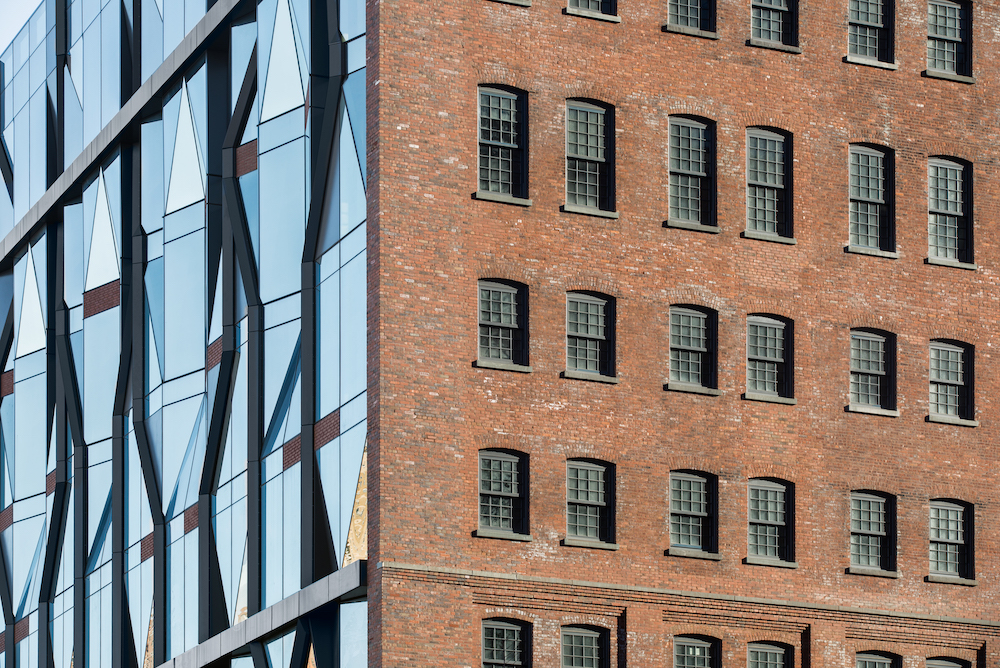 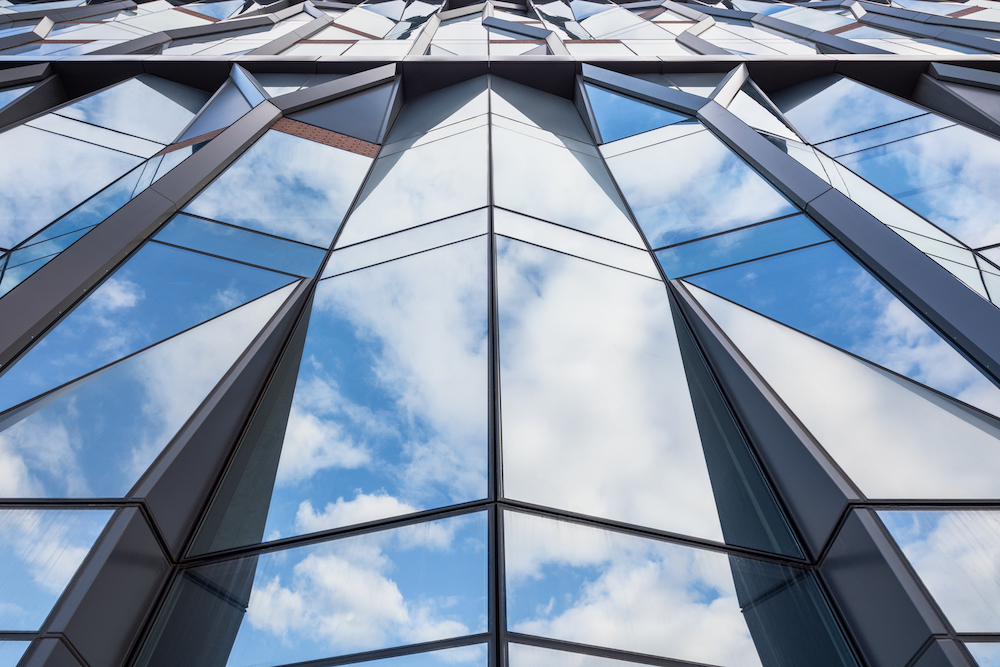 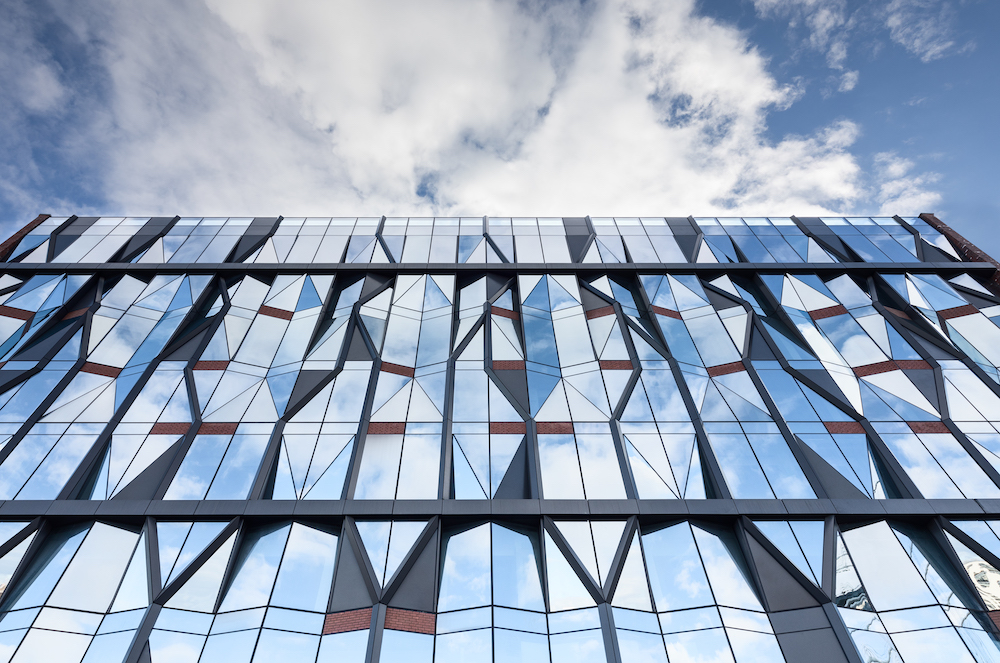 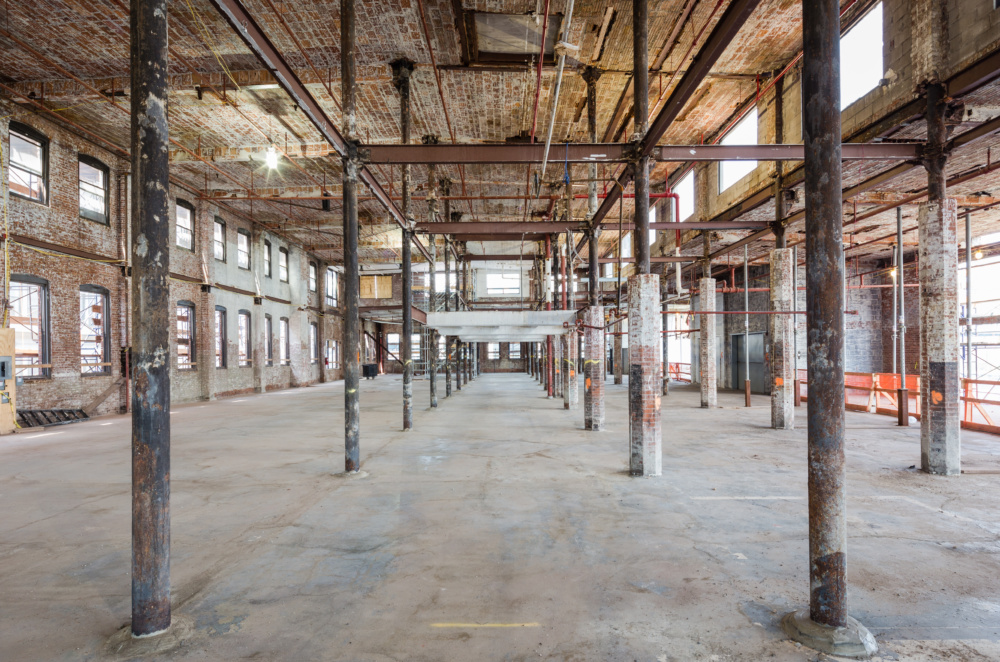 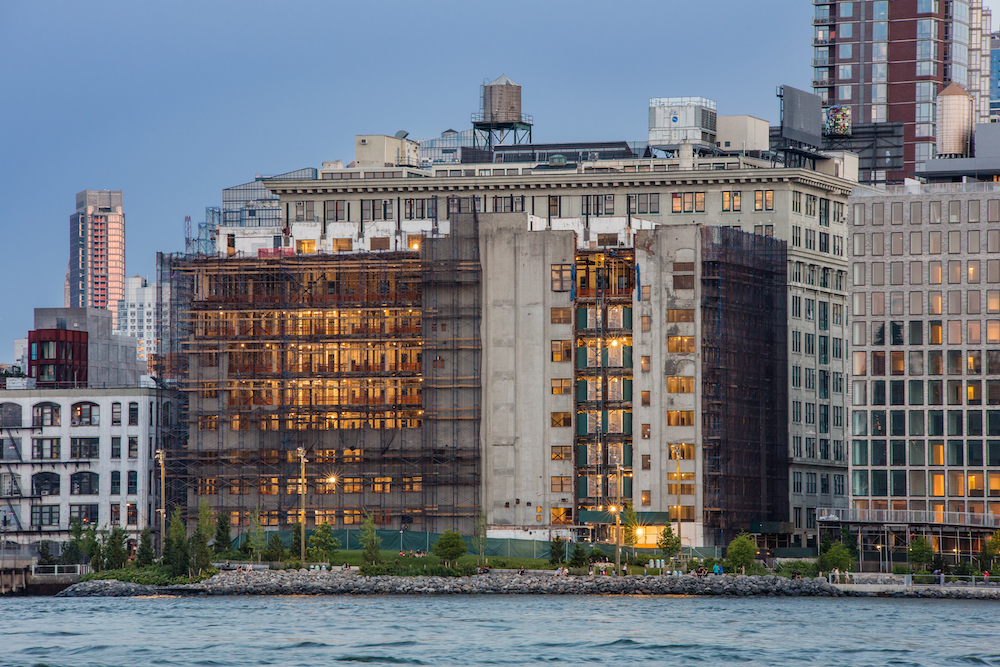 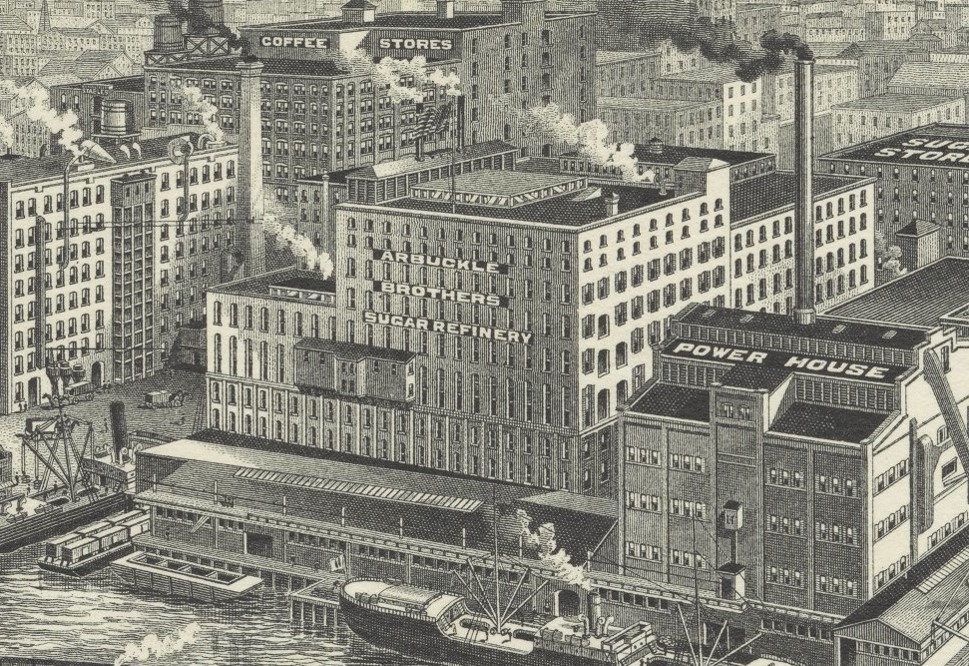 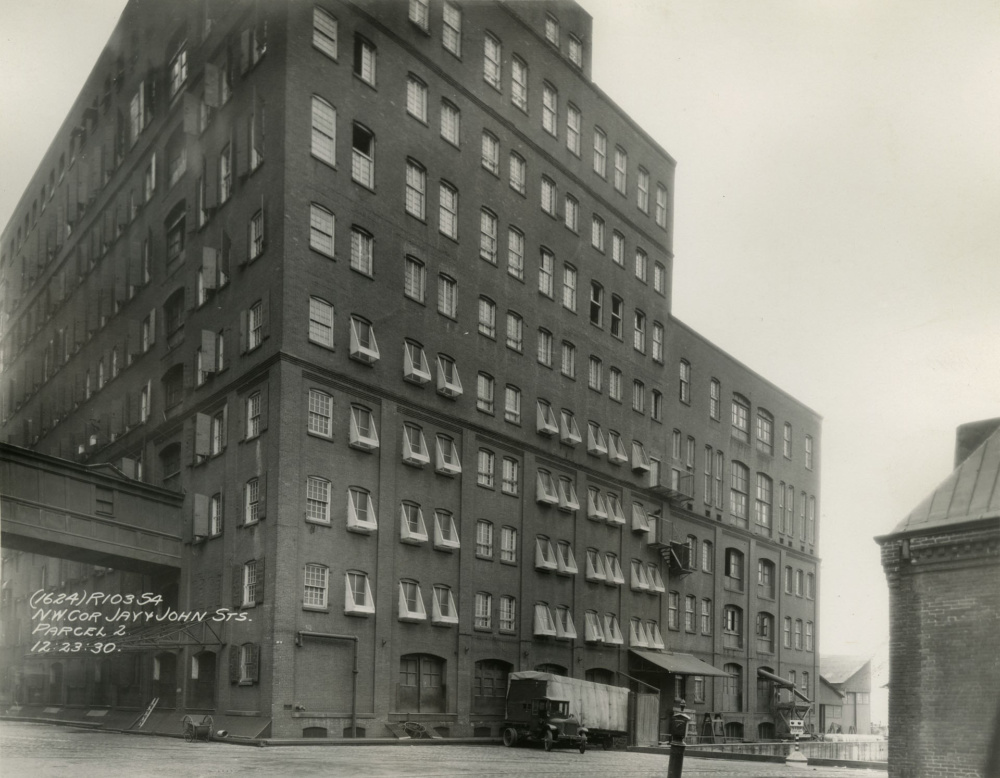 <
►
>
The project included the extensive restoration of brick masonry and the installation of an entirely new glass skin. (Pavel Bendov)

Over the last two decades, Brooklyn’s DUMBO neighborhood has undergone a significant degree of development, including the restoration of historic warehouses that dominated the neighborhood for centuries and plenty of new construction. ODA, which has a number of projects across the borough, recently completed the restoration and partial recladding of a decrepit 19th-century refinery and warehouse with a lively, iridescent glass curtainwall.

The 130,000-square-foot development, which reaches a height of 10 stories, was originally built in 1898 as a sugar refinery for the Arbuckle Brothers and relied on a steel structural system with the brick elevations largely serving as curtainwall. Similar to other structures throughout the neighborhood, the building has undergone significant changes since construction; in 1925 it was converted to a winery, with the west elevation shorn off a decade later. The site was left vacant and in a state of continual decline from the middle of the 20thcentury until 1991.

The design from ODA draws from this history with a crystalline western elevation which shimmers and reflects the skyline of Lower Manhattan and the East River. According to ODA communications director Juan Roque Urrutia, “besides the construction challenges of dealing with an old structure, one of the main challenges was to actually convince the Landmarks Preservation Commission about the values of the original building and how a modern incorporation of a kaleidoscopic facade was not only respectful but also appeals to heritage stories.”

The glass modules are split between rectangular and triangular units, which rise perpendicular to the floor plate or inflect inward to effectively create concave bay windows. Minor segments of brick are interspersed throughout the western elevation and are located adjacent to the branch-like mullions. The average dimensions of the glass modules are approximately 11-by-5 feet, and each module was treated with a low-e coating to boost their reflectivity. Each panel spans from floor-to-floor and is held to the top of each floor slab with an aluminum anchor plate and hook.

Grafting an entirely new skin onto a historic structure is a remarkably complex procedure, and ODA turned to facade consultant SURFACE DESIGN GROUP(SDG), who have established a particular expertise in facade retrofit and historic preservation. The retrofit uses a unitized glass and aluminum curtain wall system with angular facets and spandrel panels located at the slab edge. “As part of the north façade retrofit, the existing historic brick and terra cotta arched floors were extended with reinforced concrete to meet the new profile of the faceted facade,” said the SDG team. “Given the complexity of both the curtain wall panel and edge of slab geometry, which is also faceted to mirror the form of the panels, standardizing the anchoring method aided in the efficiency of panel installation.”

Standing derelict for decades, the former sugar refinery also required an extensive degree of restorative work. First, stucco coating from the 1990s, and layers of old paint which hastened the decay of the brick masonry, had to be peeled away. The east elevation suffered the worst of the building’s deterioration and required the complete reconstruction of the brick facade and the underlying steel structure. The remainder of the restorative work entailed brick replacement—nearly a third of them recycled, steel spandrel repairs, mortar repointing, and the application of a new weather resistant coating.

The project is located in the DUMBO Historic District and required the input and approval of the Landmarks Preservation Commission throughout the design and construction process.