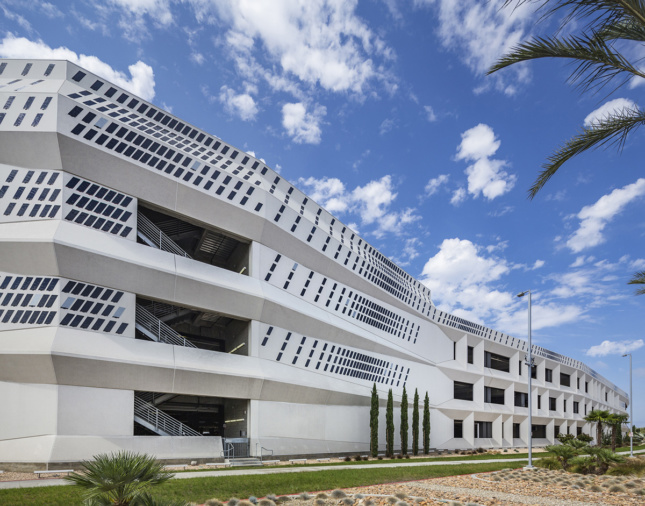 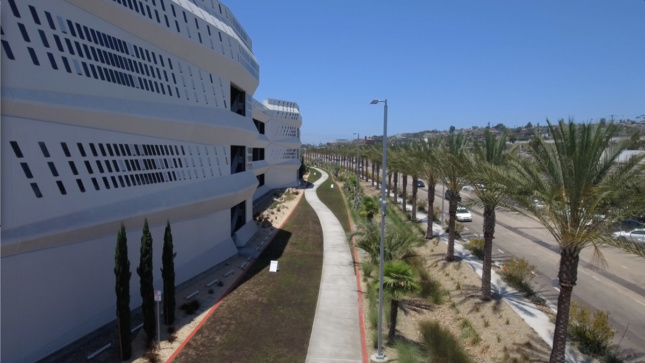 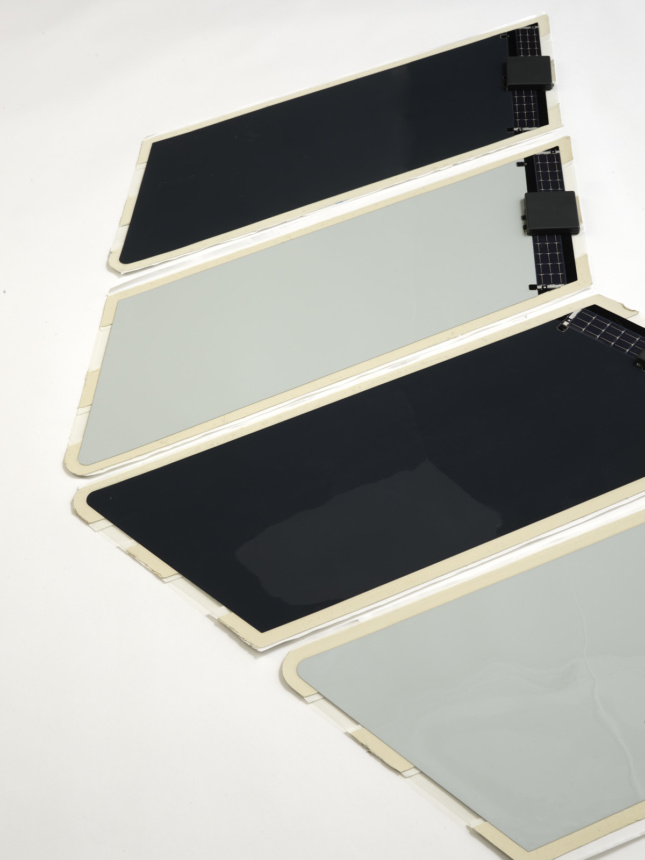 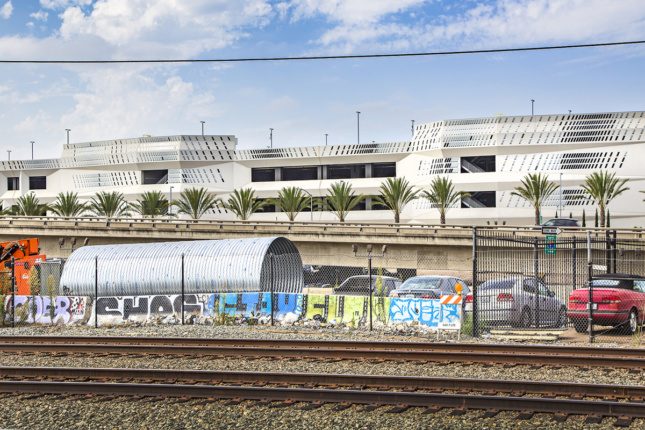 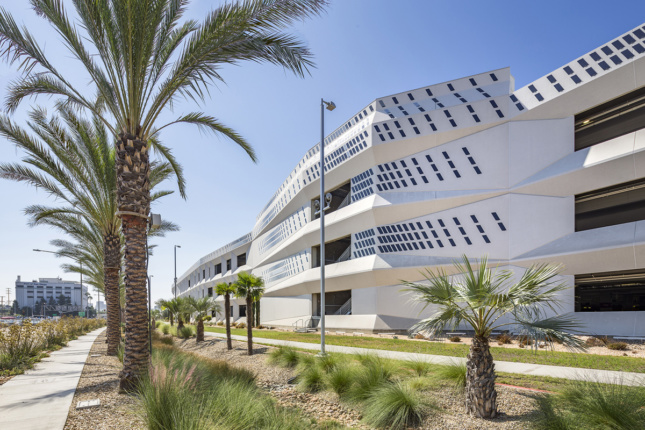 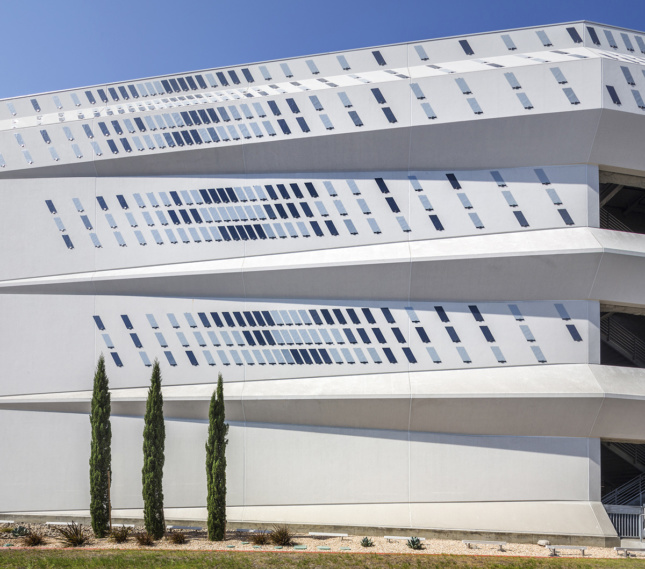 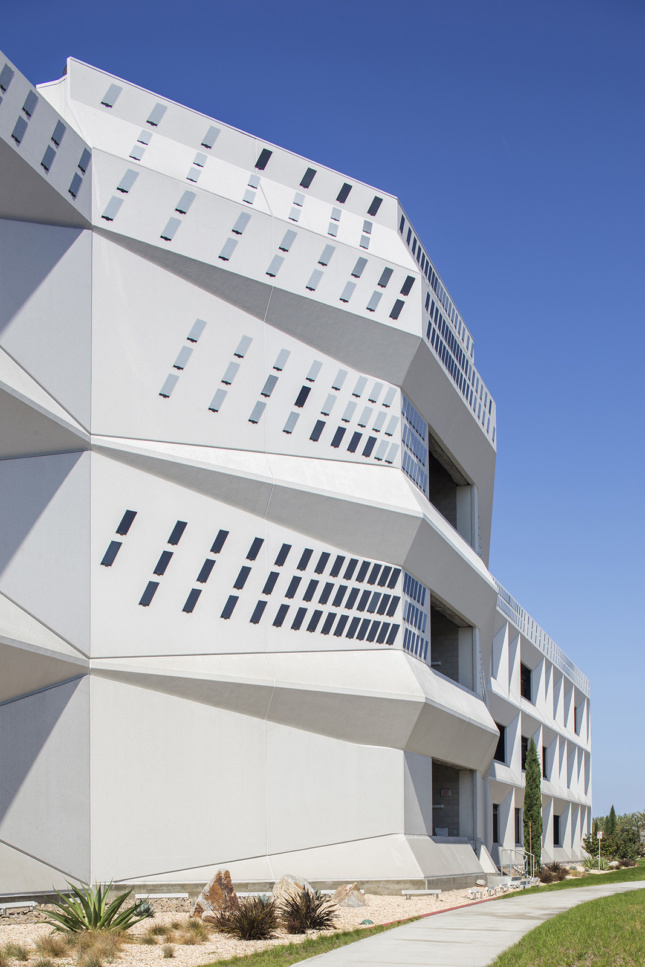 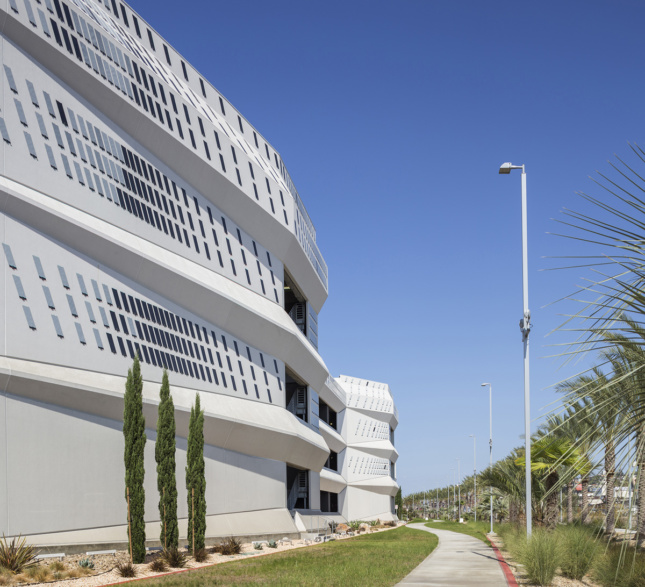 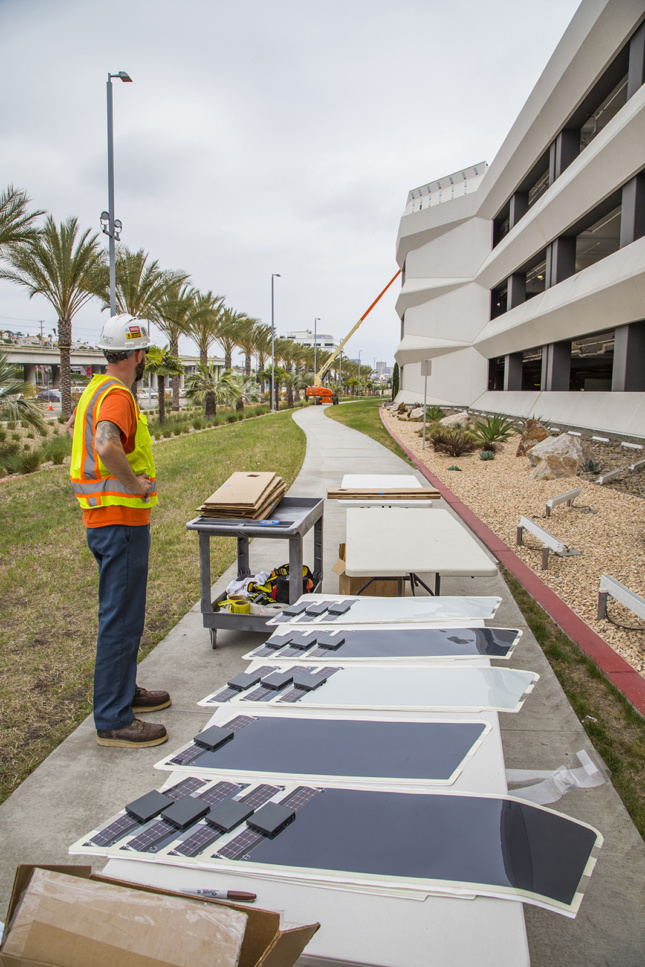 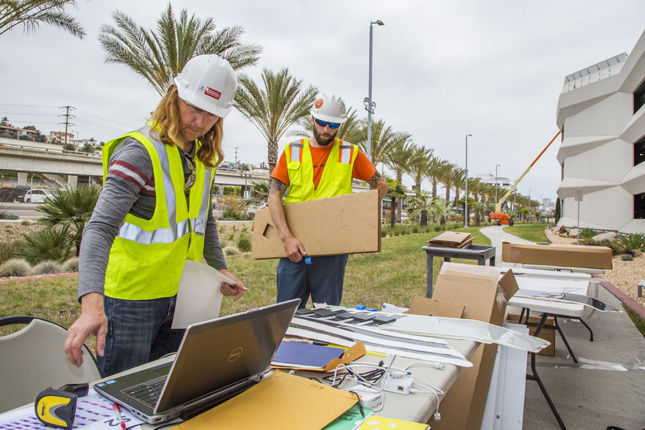 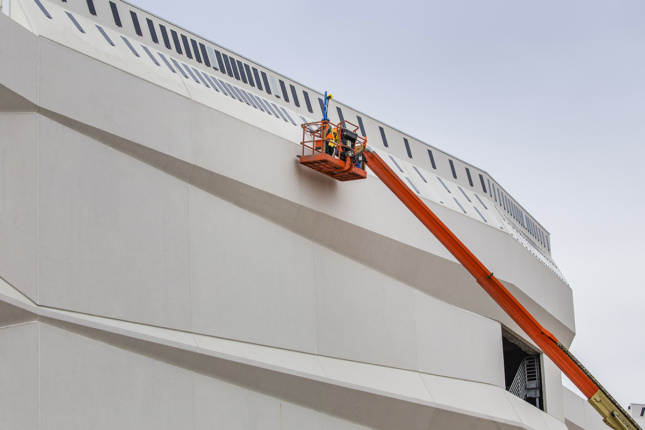 Experimenting with different ways to execute a geometric camouflage pattern, the artists turned to “electronic paper” technology as a facade applique. Individual e-paper tiles are articulated in a parallelogram shape and arranged in algorithmic distances to each other, to create a dynamic visual effect, even when still. The graphic patterns are animated by a library of short loops evoking water ripples, moving traffic, dancing snowflakes, and shifting geometries.

The physical components of Ueberall’s installation include 2,100 autonomous tiles approximately 12 by 24 inches, strategically placed wireless transmitters, and a host computer. Each tile is outfitted with a photovoltaic solar cell for power, electronics for operation, and wireless communication for programmed control. The tiles are individually coded with distinct addresses to enable precise programming of visual facade patterns. The host computer stores and coordinates all animations (about 15 to 30) designed by the artists. Information can be transmitted from the host computer through Ethernet wiring to wireless transmitters that face the building. These wireless transmitters then forward the information to clusters of tiles which further forward data to other tiles. The end result is a tile that can transform from solid black to solid white based on the information it receives. In this way, each tile represents one  pixel in a field of thousands, which is individually controlled through a pre-programmed “playlist” of synchronized effects.

The tiles are lightweight, bendable, and energy efficient, and can be cut as long as a continuous path from end to end exists for electrical current. “E Ink” does not emit light, and has a matte appearance, like paper, utilizing pigments for coloration. Energy usage only occurs when the material “switches,” which means a static pattern does not use electricity.

In the case of DAZZLE, the tiles were outfitted with specific coatings to allow the parking garage’s precast concrete facade to be power washed. Interestingly, no penetrations through the existing facade system of the building were required. The tiles were adhered to the precast concrete facade. The manufacturer, E Ink, said the tiles can be installed in numerous ways, dependent on site conditions and project requirement. Other options include track systems, tensile cable structures, and sandwiched assemblies. The tiles at DAZZLE were outfitted with solar cells, helping to offset what amounted to very little operational energy. The overall power consumption, including all support hardware (PC, communication transmitters, etc.) was less than two flat panel TVs.

The installation was completed in phases, with the tiles ultimately being installed in under two weeks. Each individual tile was coded, scanned, and GPS-located on the facade for pattern synchronization. This level of scrutiny required careful upfront design consideration. For instance, manufacturers worked to design the tiles with unique addresses and barcodes to track, inventory, and ultimately sort each piece.

The e-paper manufacturer, E Ink, is the world’s leading innovator of e-ink technology through products like eReaders, electronic shelf labels, digital signage, and architectural materials. For DAZZLE, E Ink utilized their “Prism” line, which is specifically made for the architectural market. This project represents their first major installation of the product.

The material is manufactured in large roll quantities that allows for the capability of very large scale installations. Future possibilities for electronic paper technology could be incorporation in light pollution sensitive environments, where the more natural paint-like look of electronic paper is valued over harsh LED light. E Ink said the material can be easily integrated with traditional materials to produce a more dynamic experiential space. “This is the next greatest thing, but it feels more natural and less futuristic, which in its own way is really cool.”