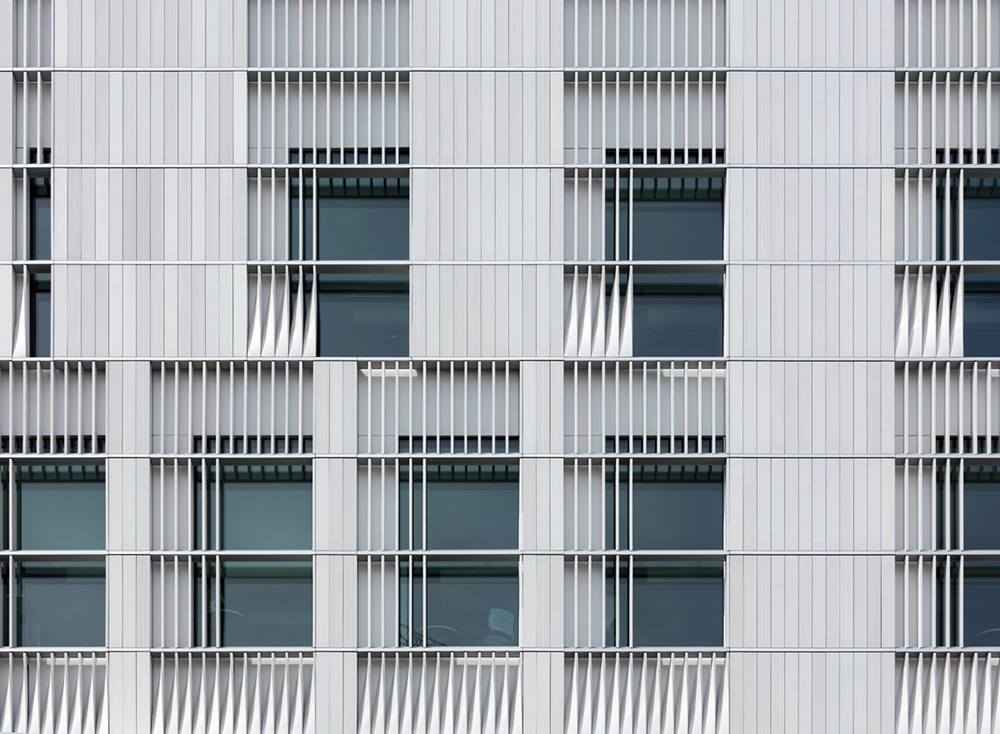 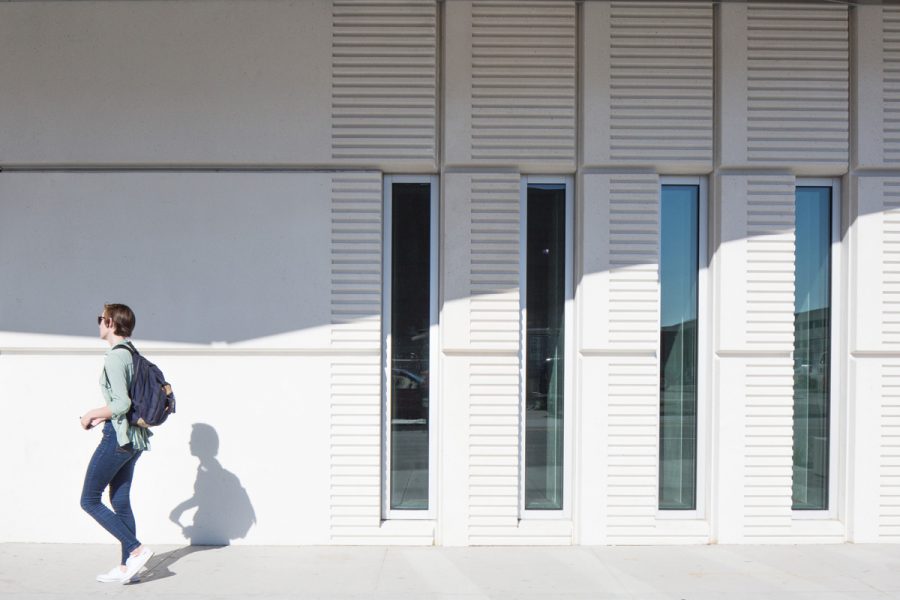 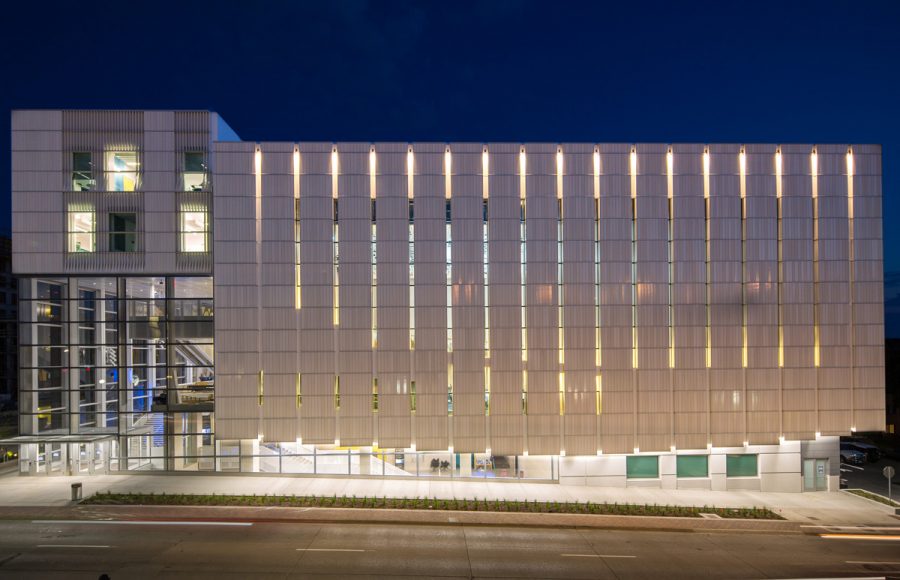 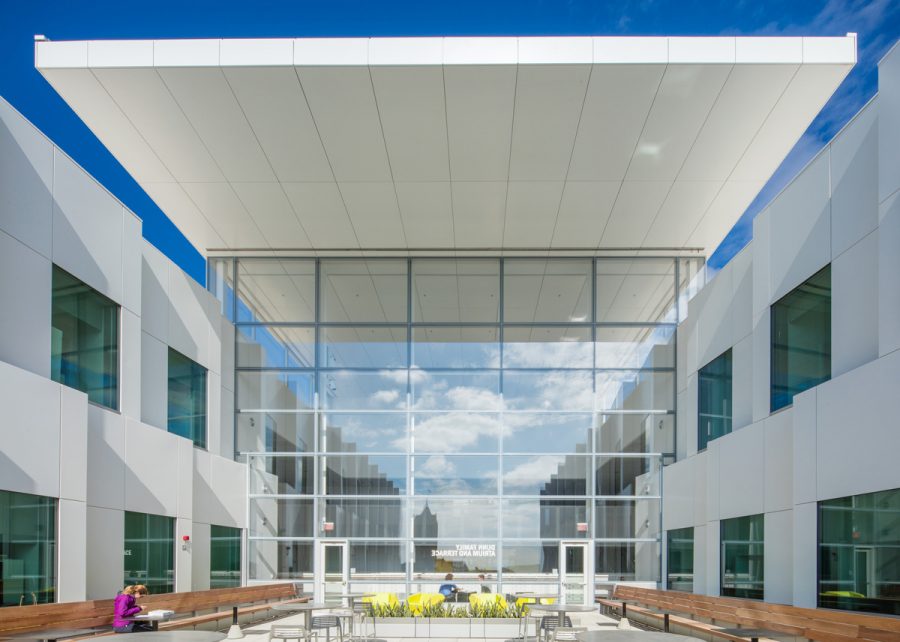 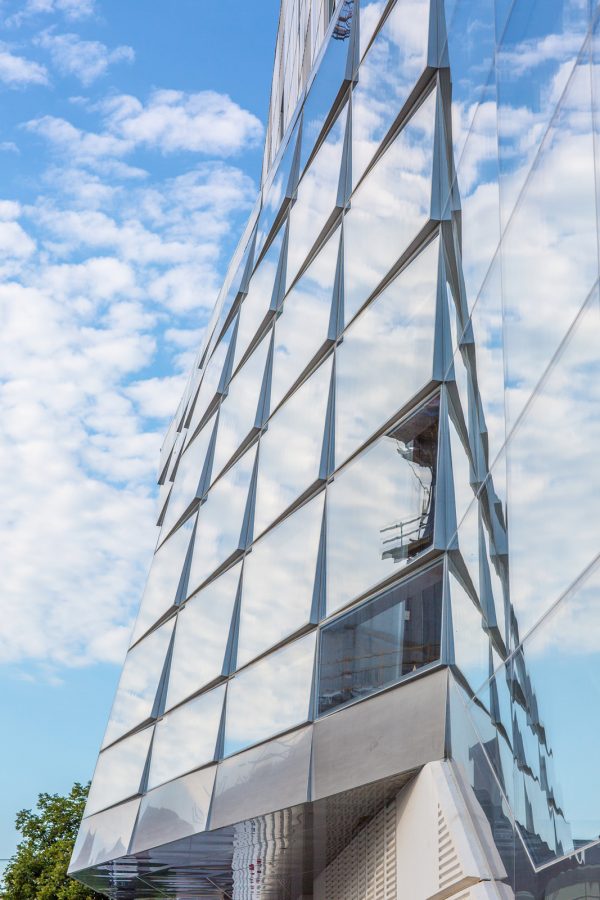 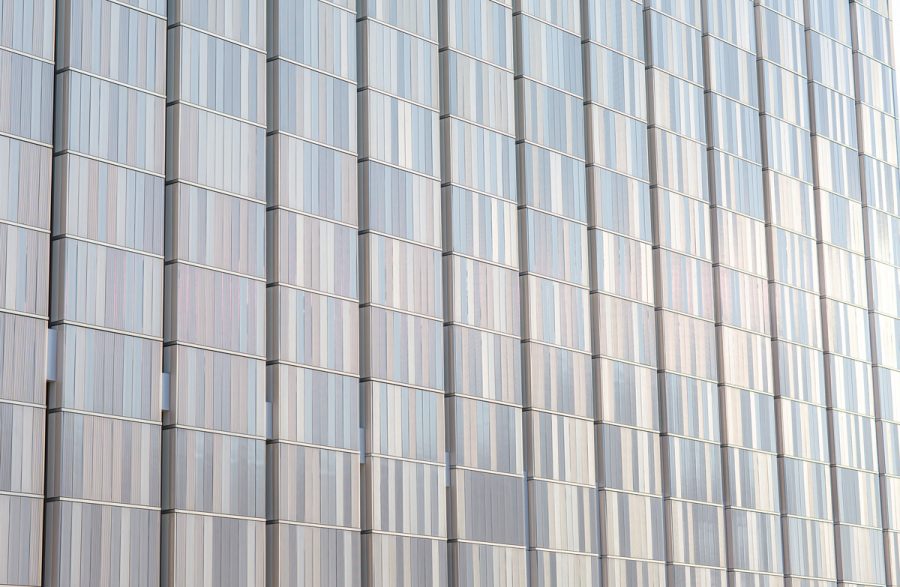 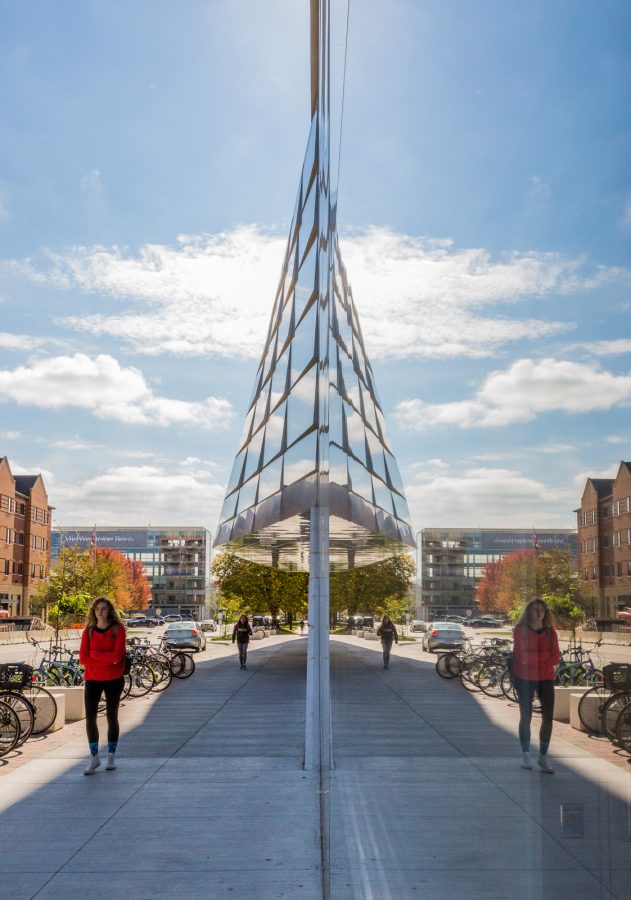 Throughout the Voxman Music Building, the project team created an array of bespoke systems that responded to unique challenges presented by the complexity of the building type and programming. From facade components to acoustic systems, LMN worked to optimize the often conflicting needs of acoustic performance, aesthetic quality, and constructability.

One of the most recognizable elements of the building design is a cantilevered “shingled” glass wall, containing a recital hall for students. Exposing this space, and expressing its function to the surrounding area, was central to the connective ideology of the project. It is here that students, in the words of LMN partner Stephen Van Dyck, learn about the art of performance.

Prototyping scale models developed by the architectural team helped establish constructability goals and manage contractor bidding on the job. “We found that if we could build the design through models, it became much easier to have a discussion with contractors about our intent.” The unique facade was constructed as a series of rectangular units that produced a gridded, cantilevered steel frame for individual glass units to sit within.

Aside from the shingled glass recital space, all other performance spaces were clad with a unitized terracotta system. The baguettes were composed of variable combinations of textures (smooth and grooved) and glaze finishes (matte and glossy). The resulting effect was a dynamic surface quality capitalizing on variable daylight conditions, including what the architects noted as exceptional sunrises and sunsets. Van Dyck said this idea of variable form and finish options within a base cladding material was one of the successes of the project and ended up guiding future facade designs, one of which is currently under construction.

At key moments, terracotta cladding tiles formally twist into vertical fins. These moments accentuate a break between major program elements within the building. To ensure the accuracy of the complex form, the architects worked with the terra cotta manufacturer to develop a jig in which the extruded clay would be slumped, dried and later fired.

“Buildings need to read at a variety of scales,” said Van Dyck. At a distance, the facade of Voxman reads at a solid/void compositional level. The medium scale allows for a reading of how program in the building is dispersed, through the cladding and aperture distribution. At a detail scale, the shimmering quality of varied terracotta tiles becomes legible.

LMN’s Tech Studio, a small team within the firm, was integrated with the project team from the beginning of the design, playing a central role in the rationalization of surface geometry and interior acoustical surface detailing. Combining research in acoustic properties, material science and manufacturing processes, Van Dyck said the team approached each opportunity with a similar toolkit. Parametric modeling was central to the pursuit, enabling rapid ideation and precise geometric control despite vast complexity. In-house prototyping capabilities augmented the team’s abilities to test ideas well before finalizing documentation and procurement.

Van Dyck said project opportunities often spawn unanticipated research problems that can be packaged to solve future design problems, and that the work from Voxman, which was completed last year, served as a basis for current and future projects. Further details can be found on LMN’s website documenting their acoustic related form-finding research and “Theatroacoustic System.” Van Dyck is co-chairing the upcoming Facades+ conference in Seattle, on Decemeber 8, 2017.