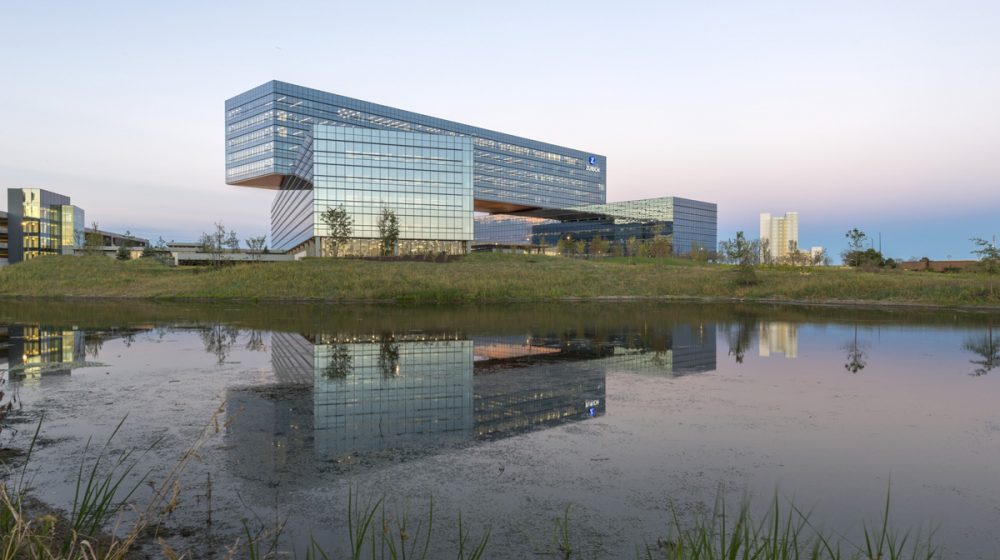 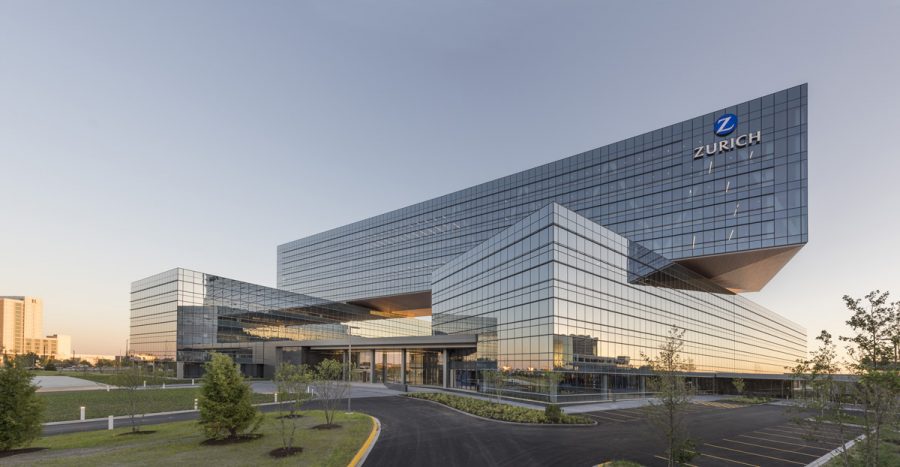 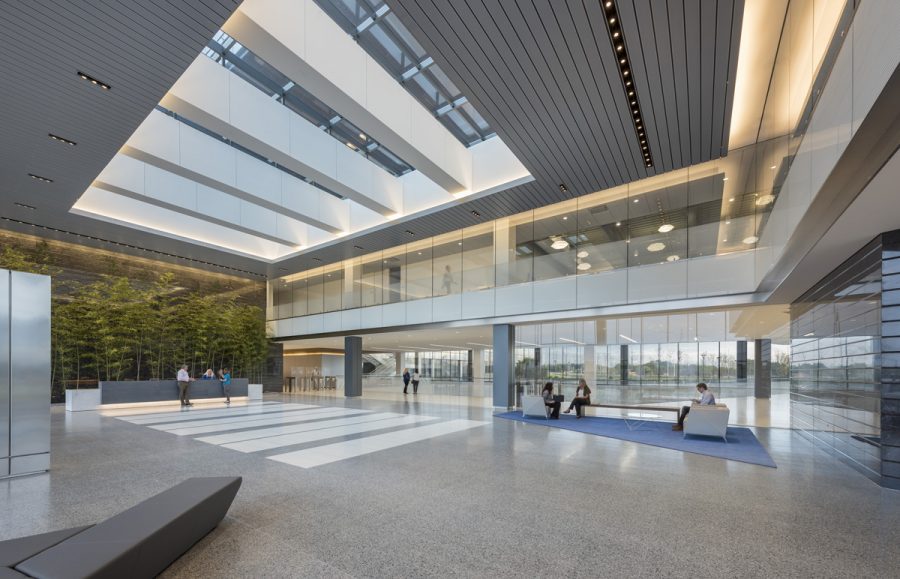 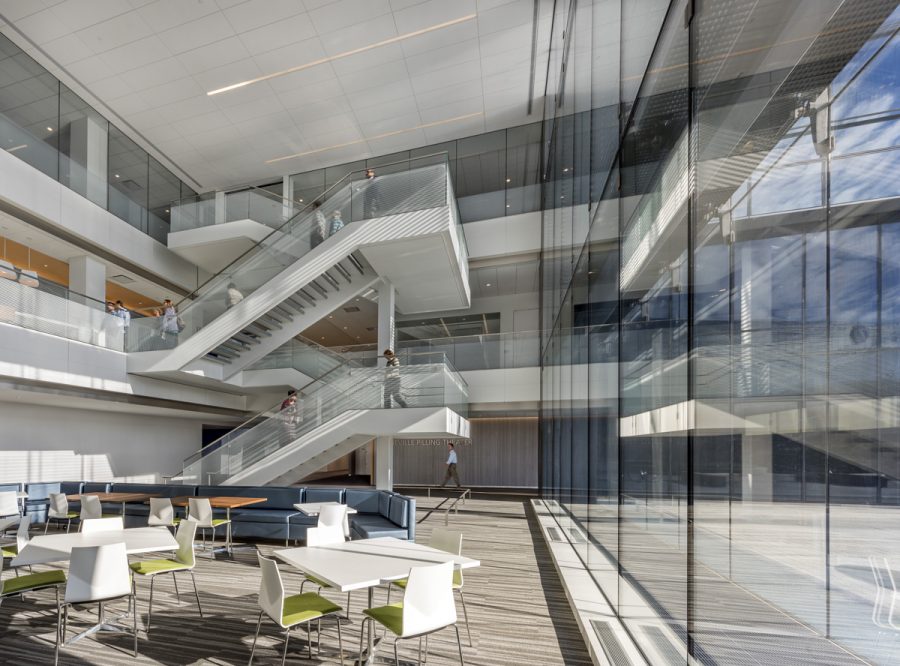 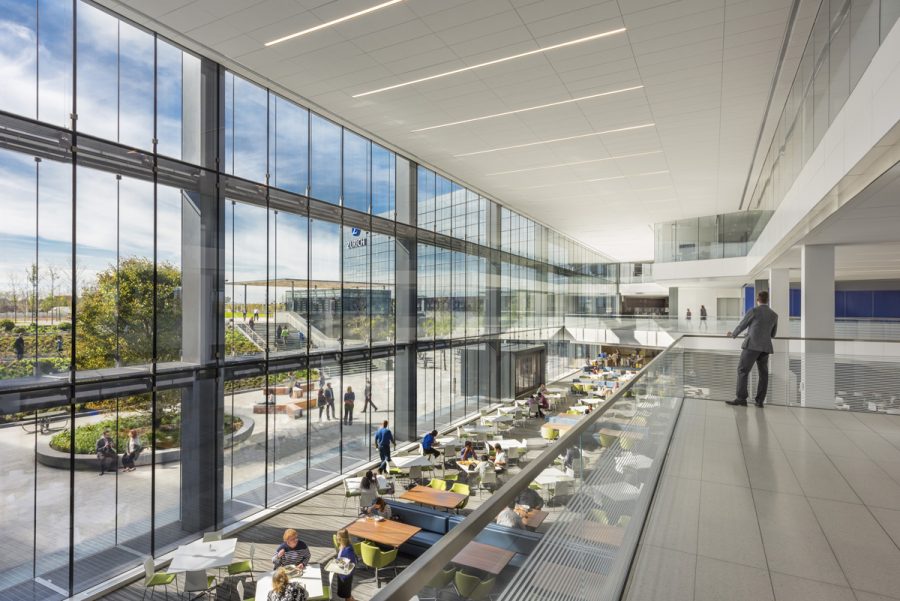 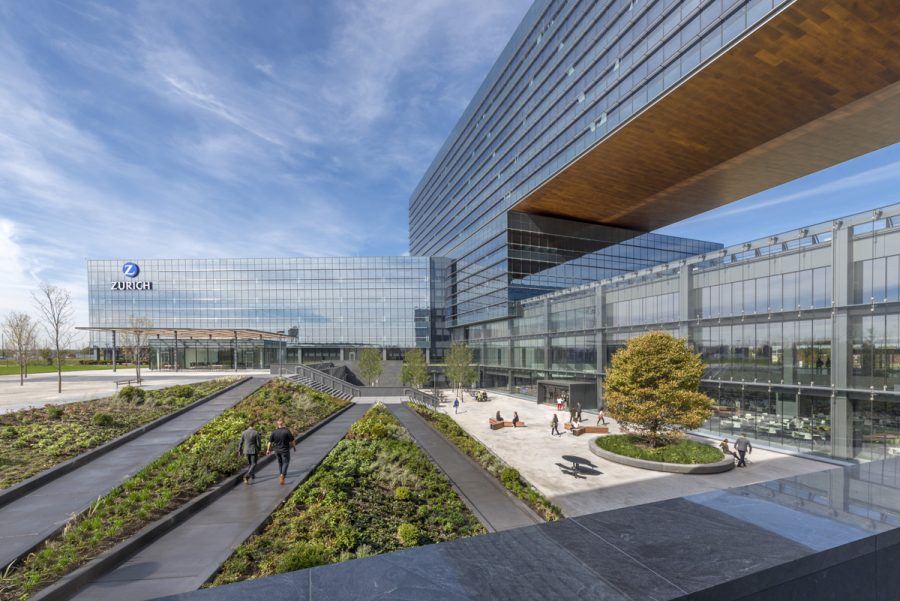 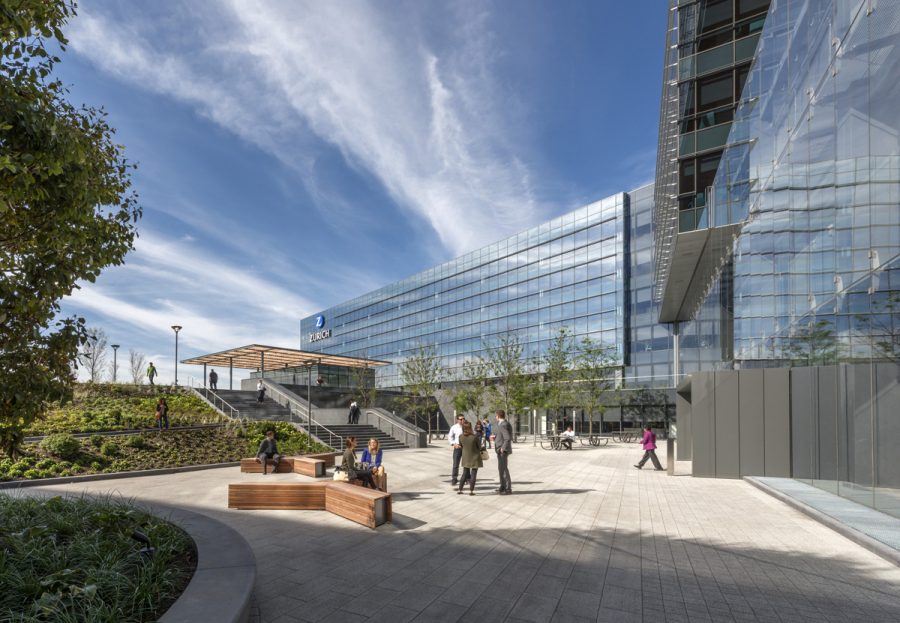 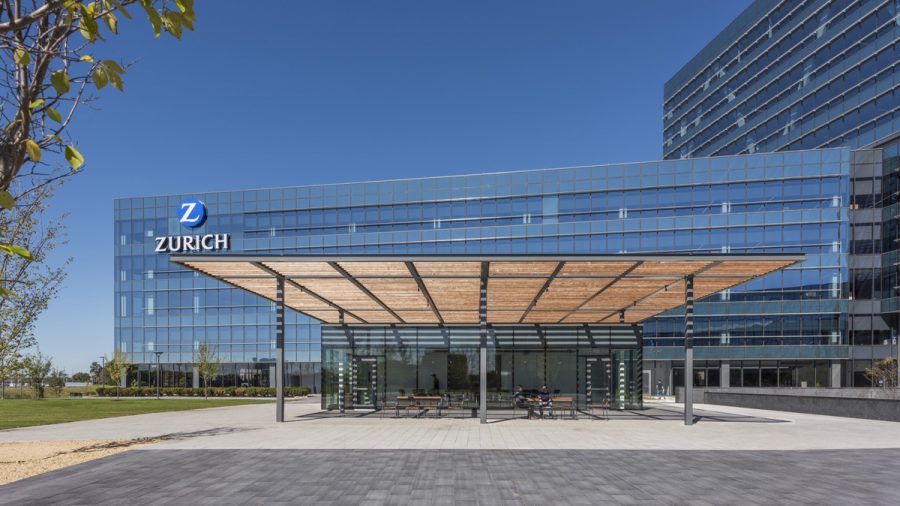 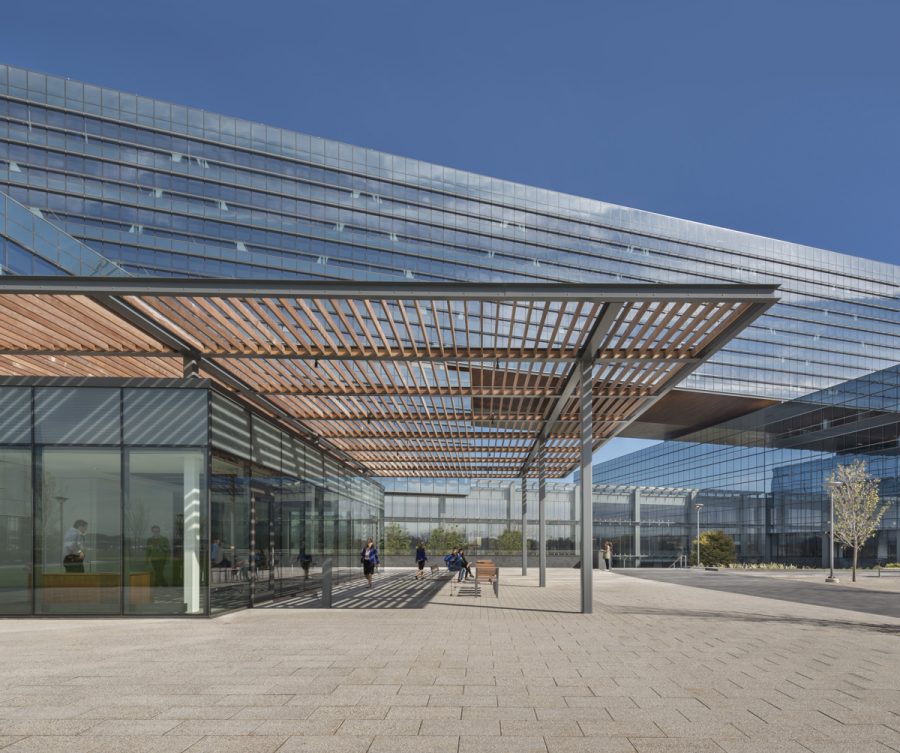 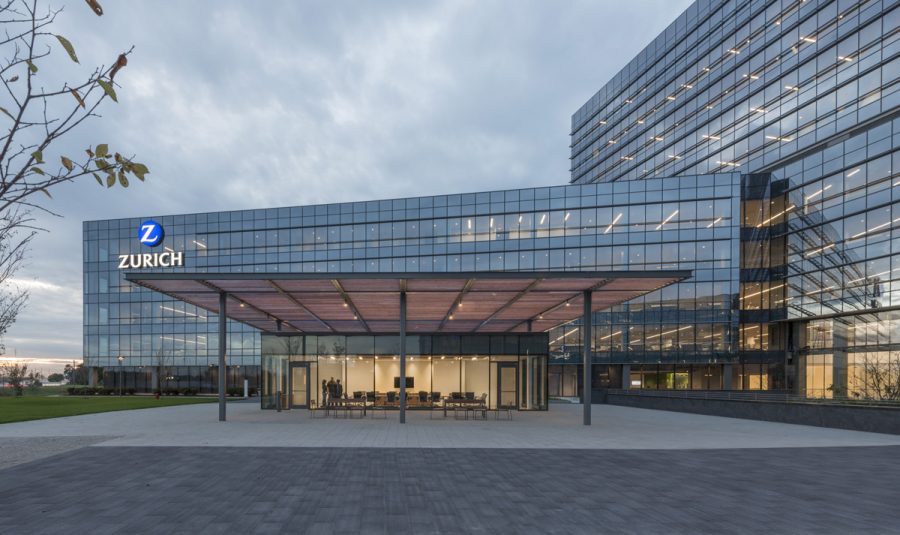 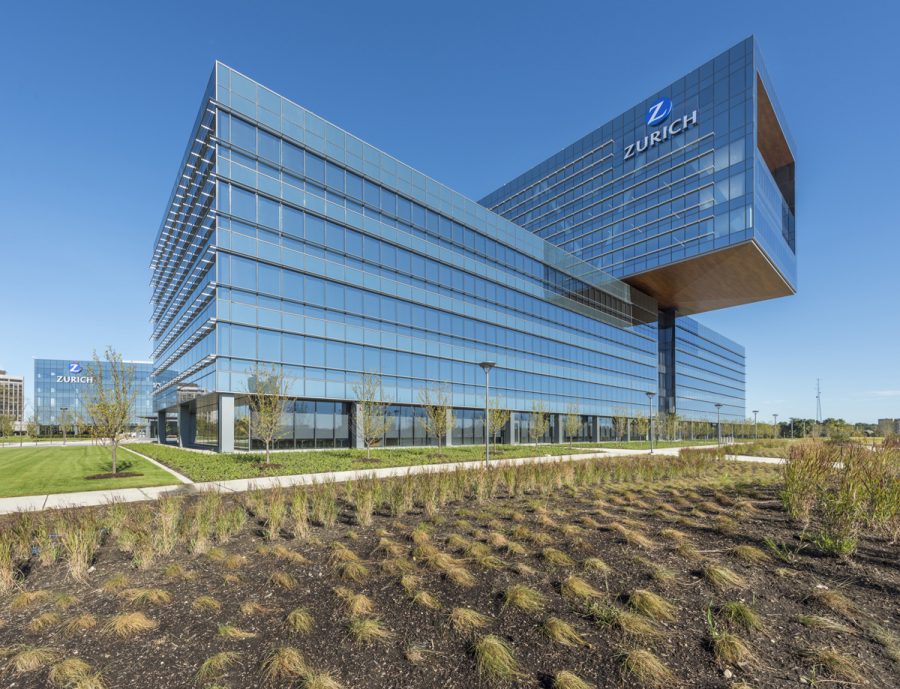 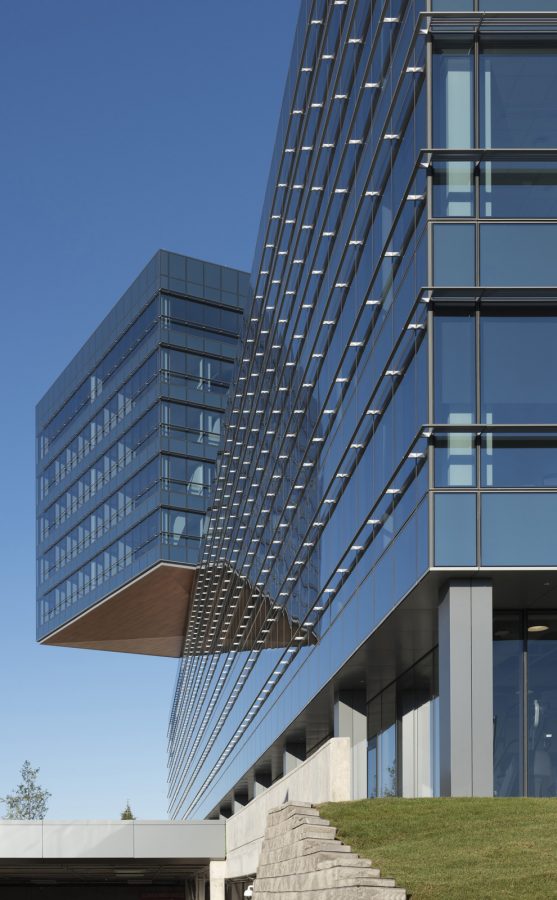 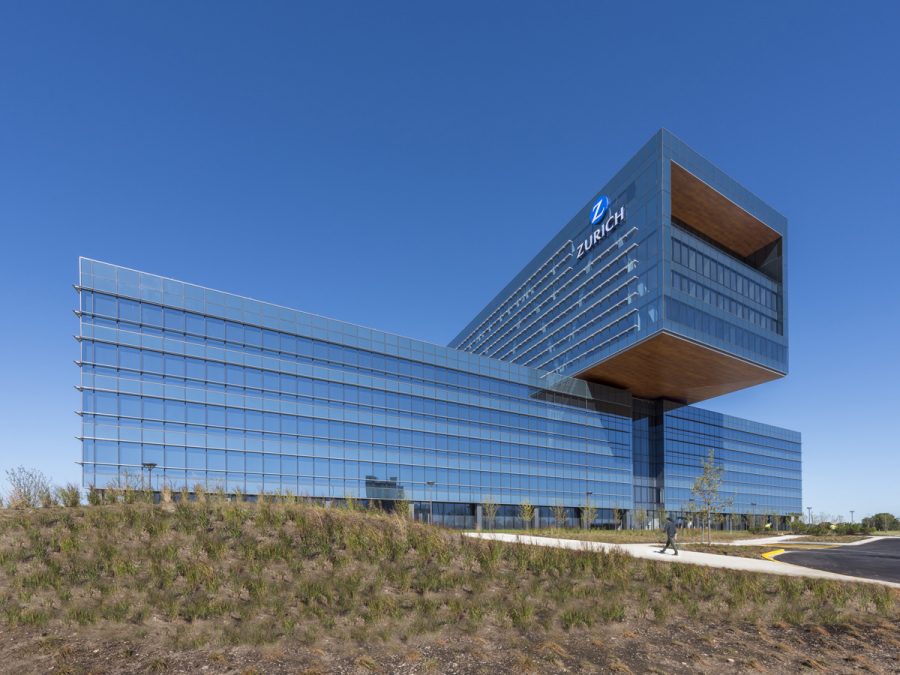 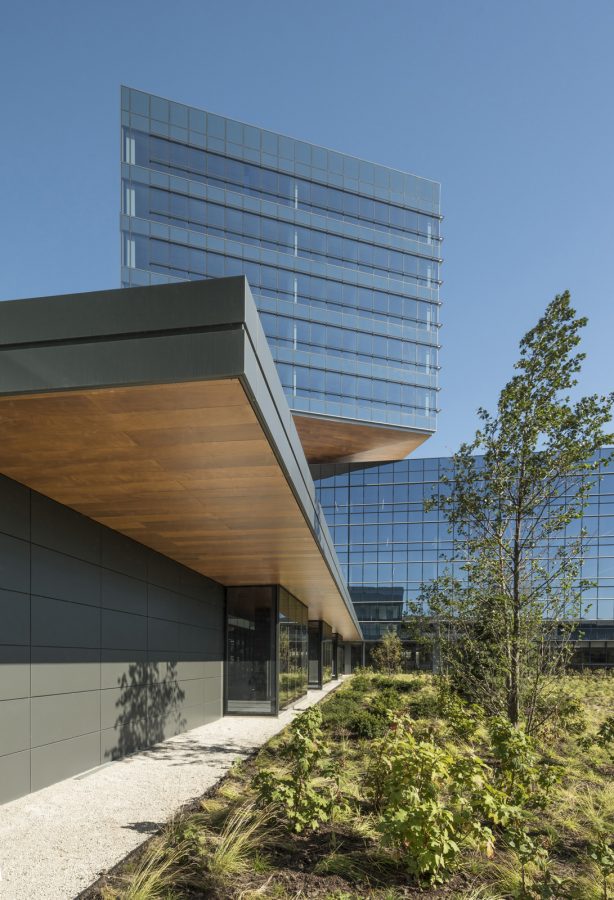 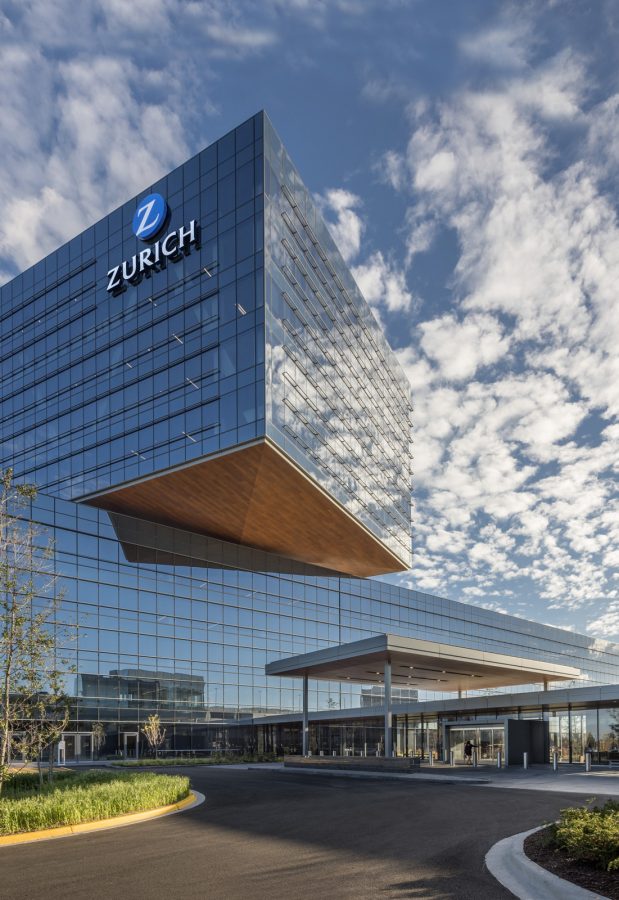 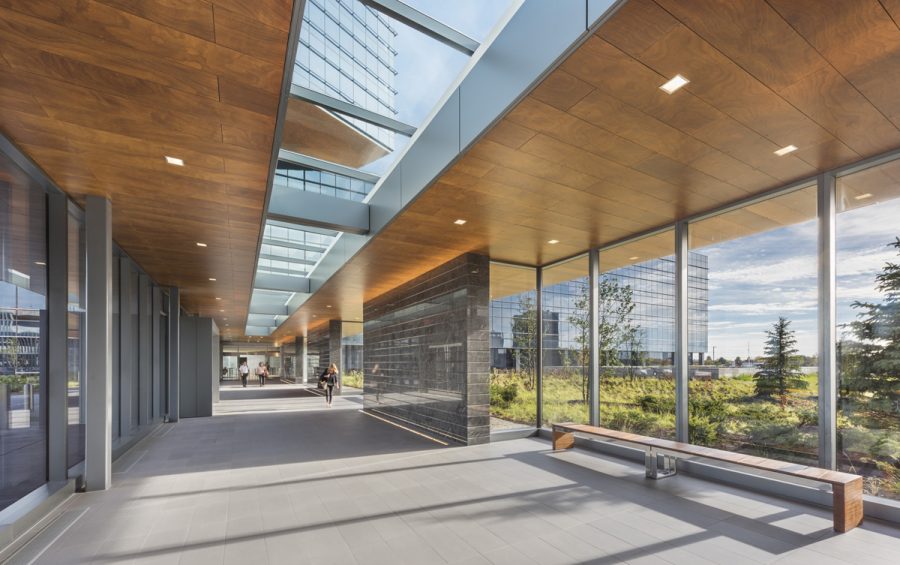 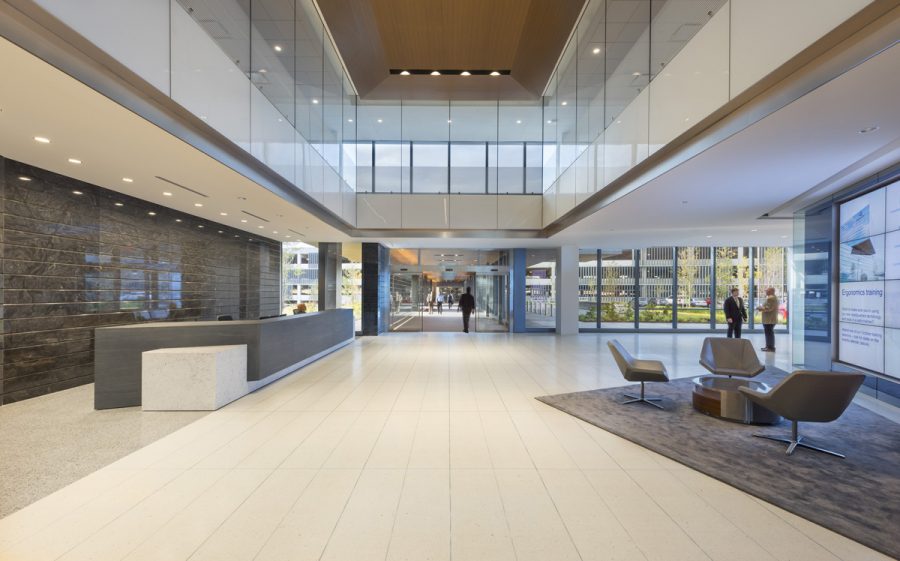 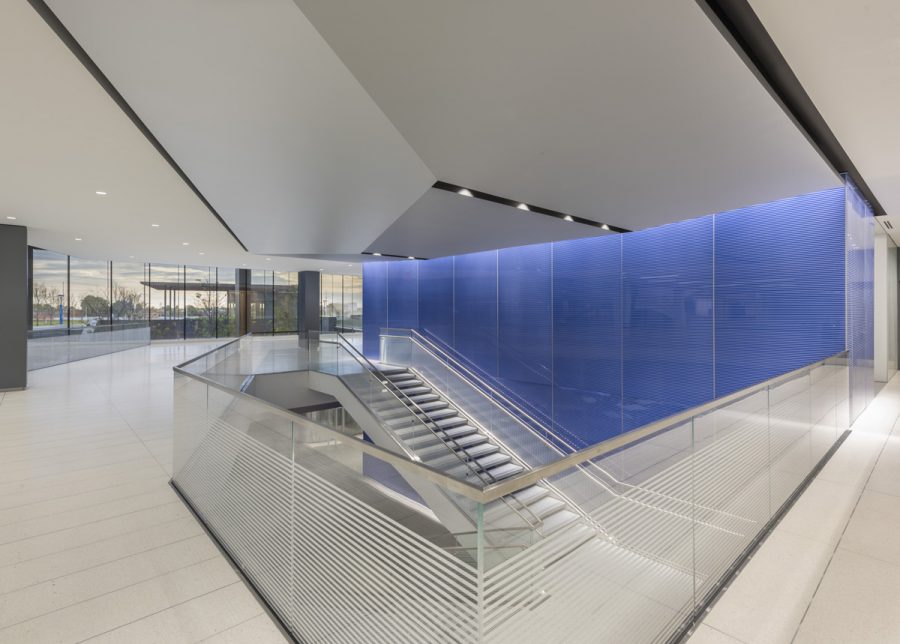 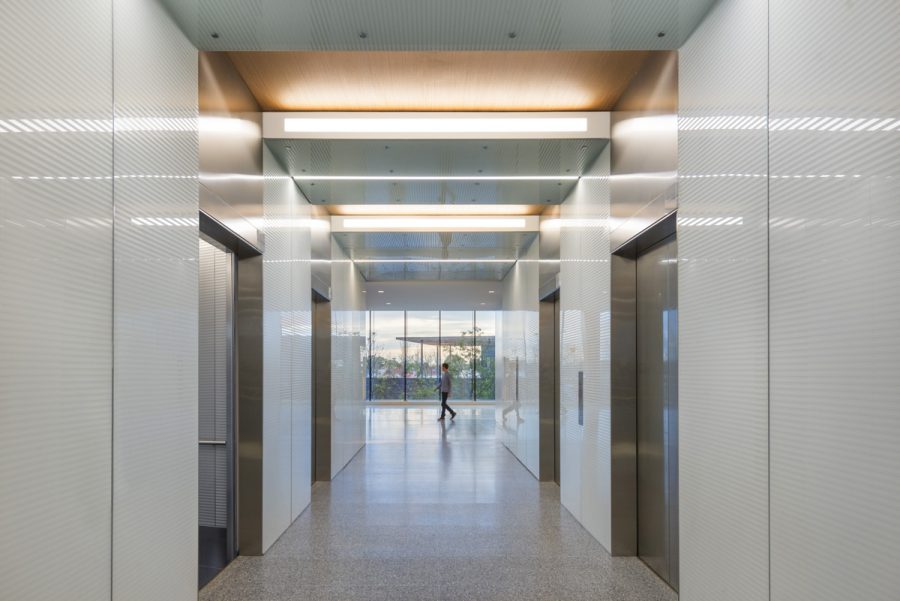 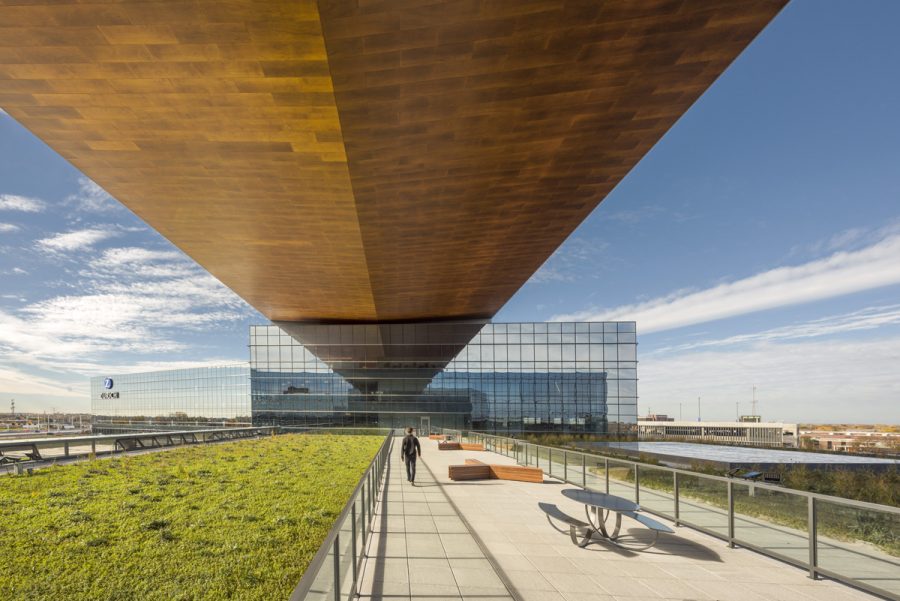 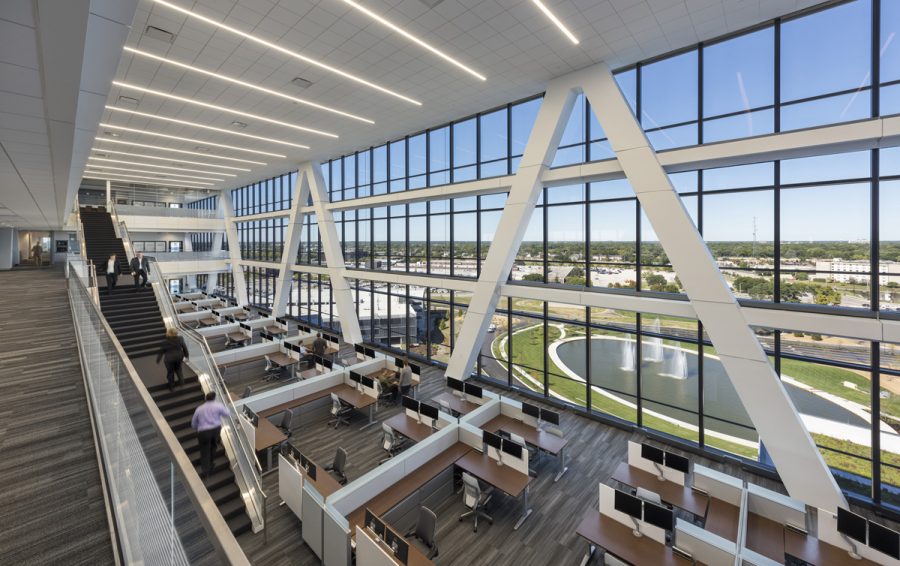 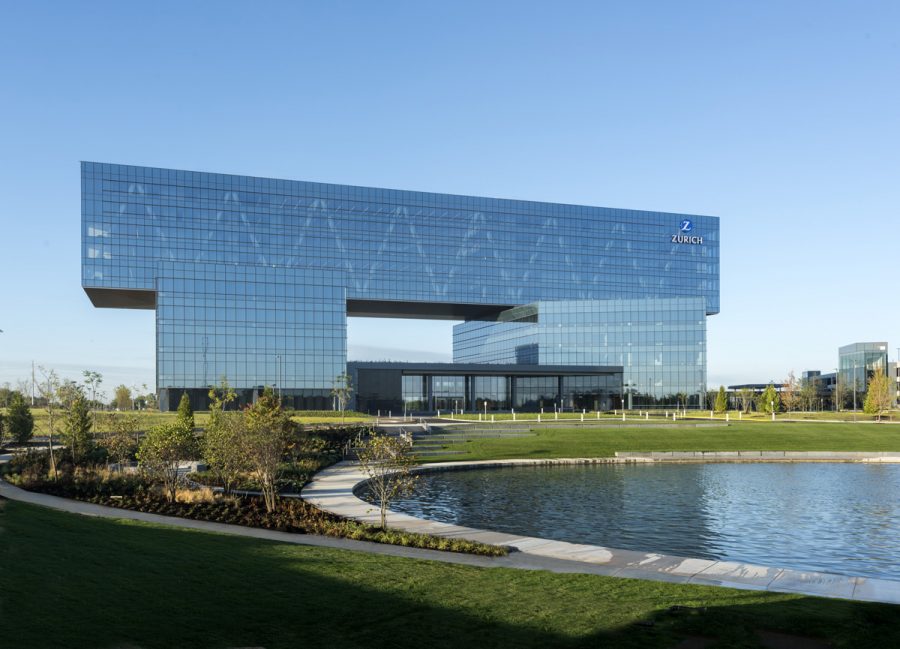 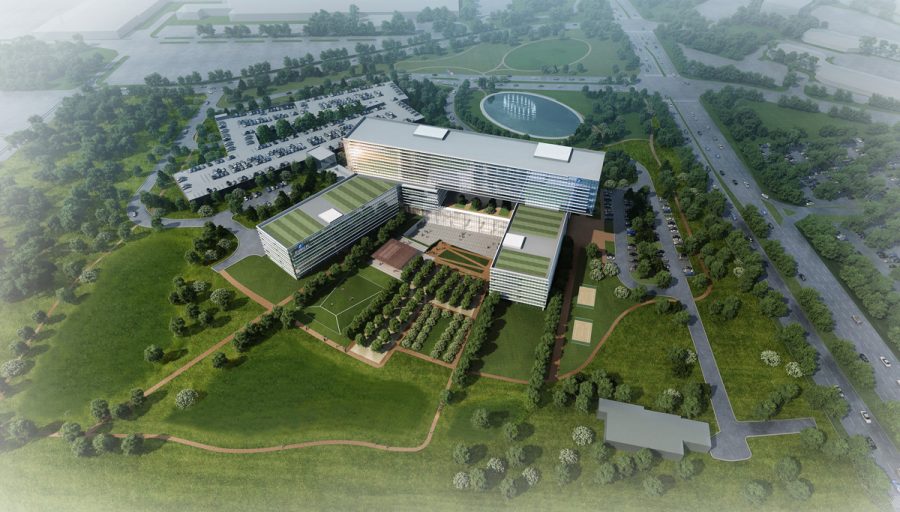 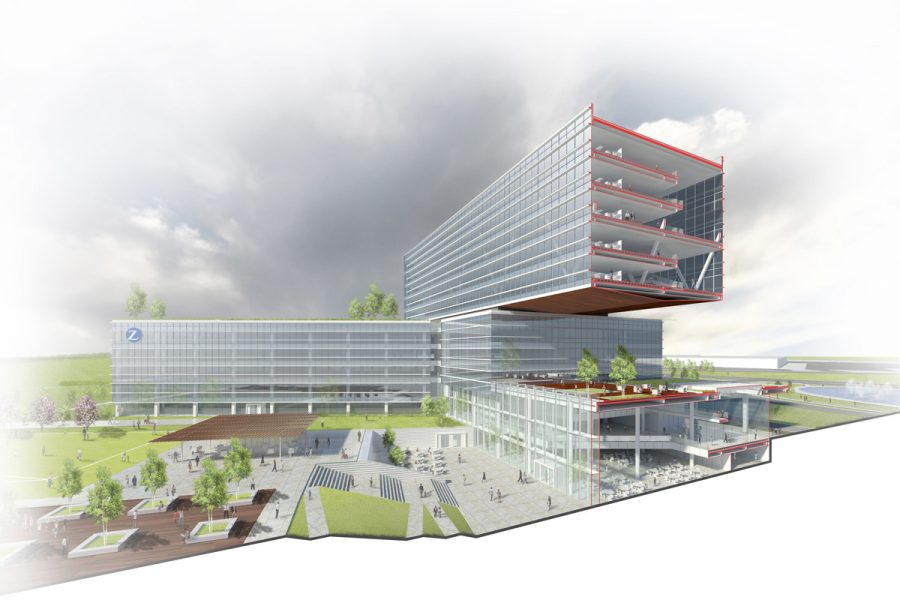 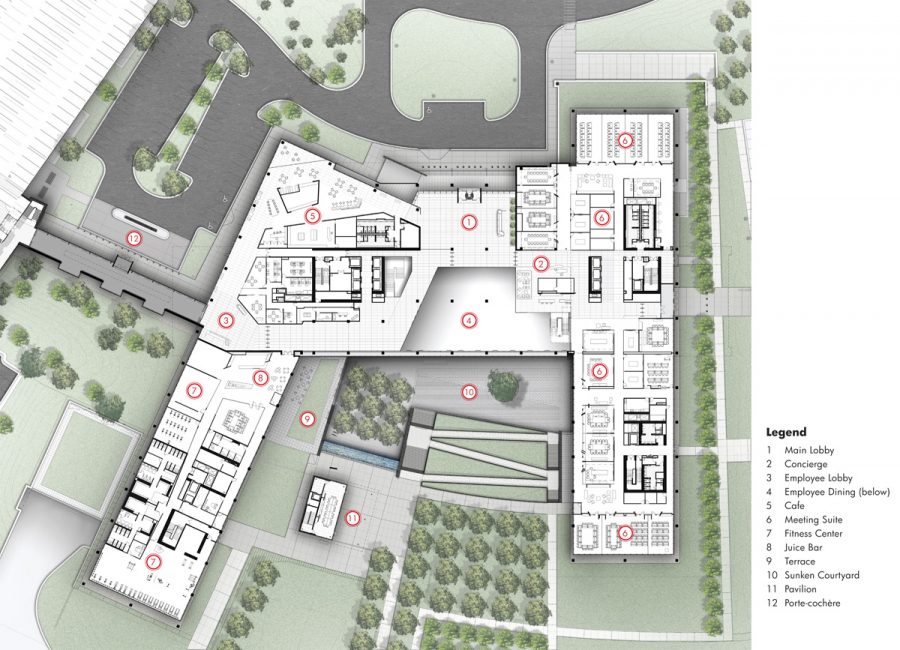 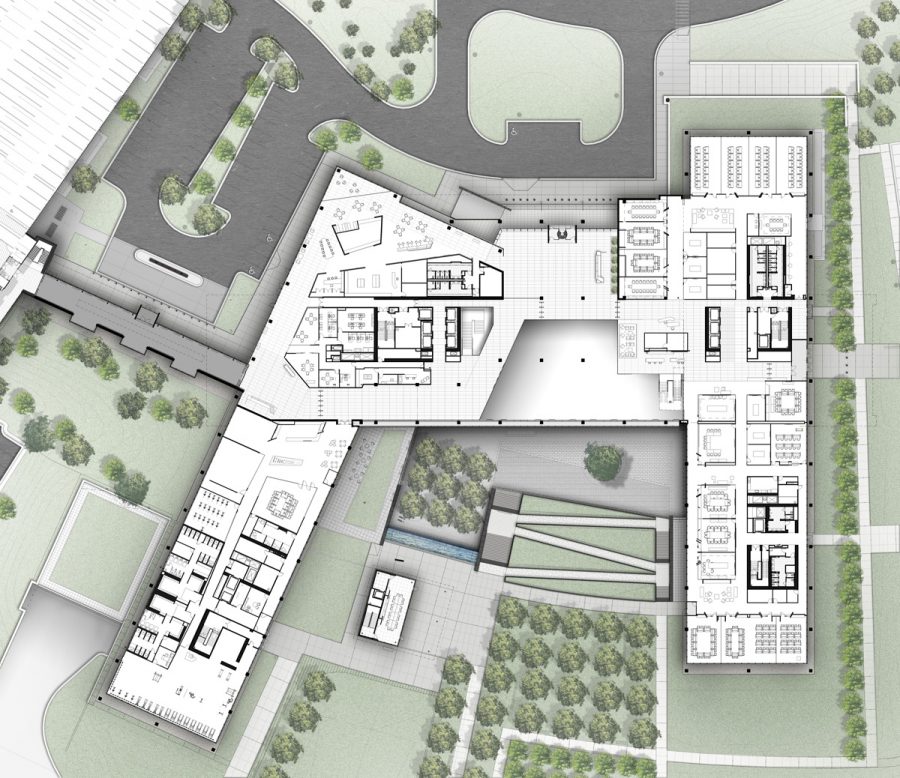 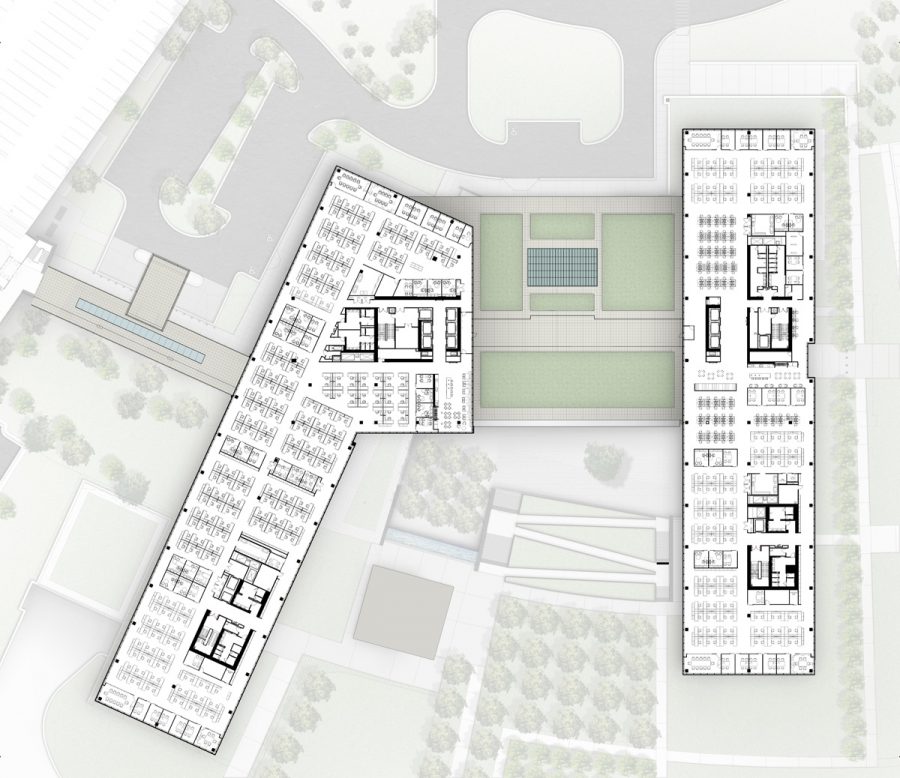 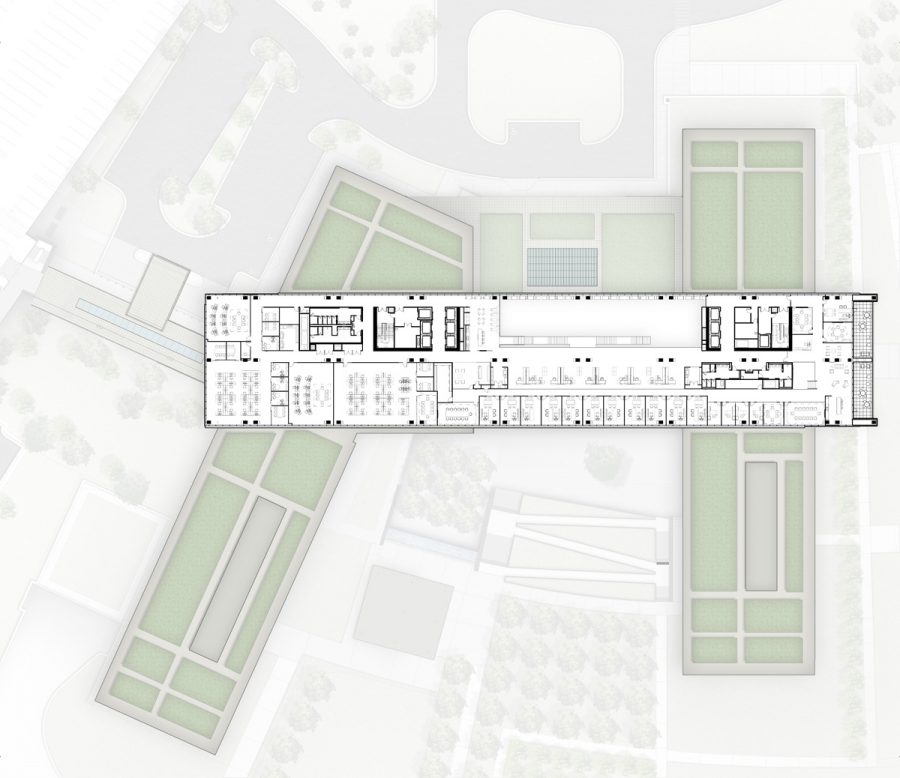 Brought to you with support from


Chicago architects Goettsch Partners, along with Clayco and Thornton Tomasetti, among others, have achieved U.S. Green Building Council LEED Platinum certification on a new North American headquarters for Zurich Insurance. The campus, located in suburban Chicago is the largest LEED Platinum Core and Shell v2009 project in the U.S. and the only LEED Platinum CS v2009 project in Illinois. The building achieves a 62.7 percent whole-building energy cost savings, making use of multiple green roofs, energy efficient technologies, rainwater harvest and re-use, accommodations for electric and low-emitting vehicles, and native landscaping with more than 600 trees on 40 acres.

The building is composed of three primary “bars” stacked and arranged to maximize views of the surrounding landscape and optimize solar orientation. The composition is benchmarked off the top volume, which was rotated 22-degrees. Paul De Santis, principal of Goettsch Partners, said this calculated move aligns the building with downtown Chicago, over 30 miles away. “The idea that you are in the suburbs but have a visual connection to the city resonated with Zurich’s leaders.” The lower bar on the east side of the campus is set 90-degrees off of the top bar, which helps to deflect northern winds and buffers sound from a nearby highway. Its rotation allows for direct sun in the courtyard near midday, promoting outdoor campus usage during the lunch hour.

The curtain wall facade wraps outboard of three super scale trusses that are set 60 feet on center, achieving an 180-foot span over the middle of the campus, and a 30-foot cantilever at the perimeter.

Michael Pulaski, vice president of Thornton Tomasetti, said that their team fine-tuned the glazing characteristics on the building, and custom designed a shading system that reduces peak gains and optimized daylighting. Detailed daylighting studies, using parametric software like Honeybee, were used to evaluate the effects of automated interior blinds and fine-tune the depth of the exterior shading devices for each orientation. The analysis optimized the depth of the shades for energy performance, which reduced peak solar gain for better thermal comfort and the size of the mechanical systems.

De Santis said that in addition to this significant work to manage electricity usage, the management of water on site helped the project achieve its LEED Platinum rating. To push the project from a gold to platinum rating, De Santis said, “it comes down to two things: energy and water.” The project team also incorporated features such as 1 acre of green roofs, native planting strategies, and large water retention areas for landscaping irrigation.

The most advanced facade assembly occurs along the glazed south-facing wall of a three-story cafeteria where a ventilated double-wall facade was specified. Here, to verify performance and optimize the façade for reduced energy consumption, Thornton Tomasetti provided computational fluid dynamics (CFD) modeling. The 4.5-foot-wide double wall with integrated shades is designed to reduce solar gains in summer, while increasing the gains in the winter, as well as to improve daylighting, resulting in an estimated 33 percent energy savings in the adjacent space.

Elsewhere, a single low-e coating on the number two surface (inner side of the exterior layer) continues through the insulated spandrel panels to produce a more uniform aesthetic while helping to minimize solar heat gain.

The ground floor features a more transparent recessed glass, which De Santis said was an aesthetic and compositional move to help the upper floors read as “floating” volumes.

With approximately 2,400 employees moved into the facility, the campus was designed to accommodate up to 2,800 employees. De Santis said the two lower bars are designed to extend an additional 100-linear-feet if and when more space is needed in the future: “It’s very rare to work on a 26-acre site. We’re used to working in very urban conditions. So the idea that the land allows for some of these growth strategies is very natural for the project. The longer these bars get, the more elegant the architectural expression will be.”