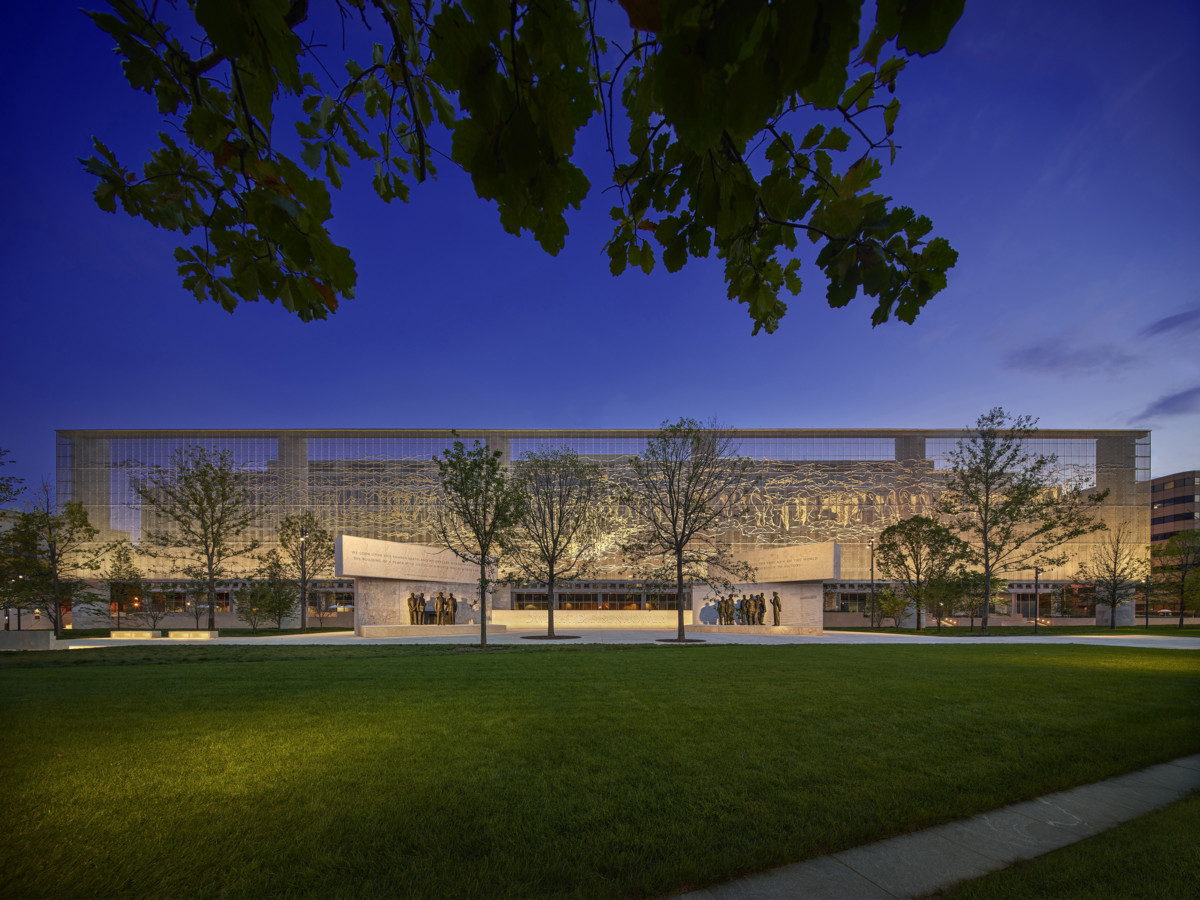 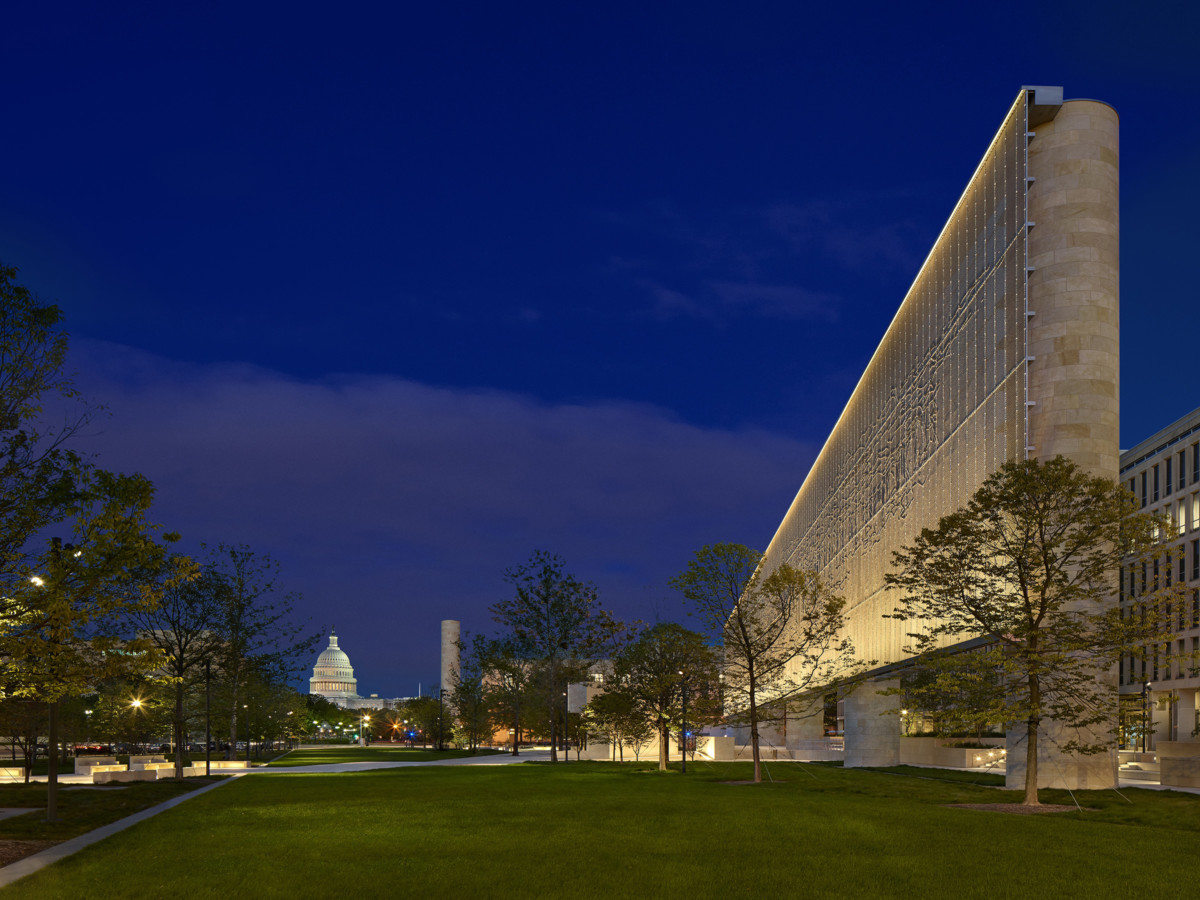 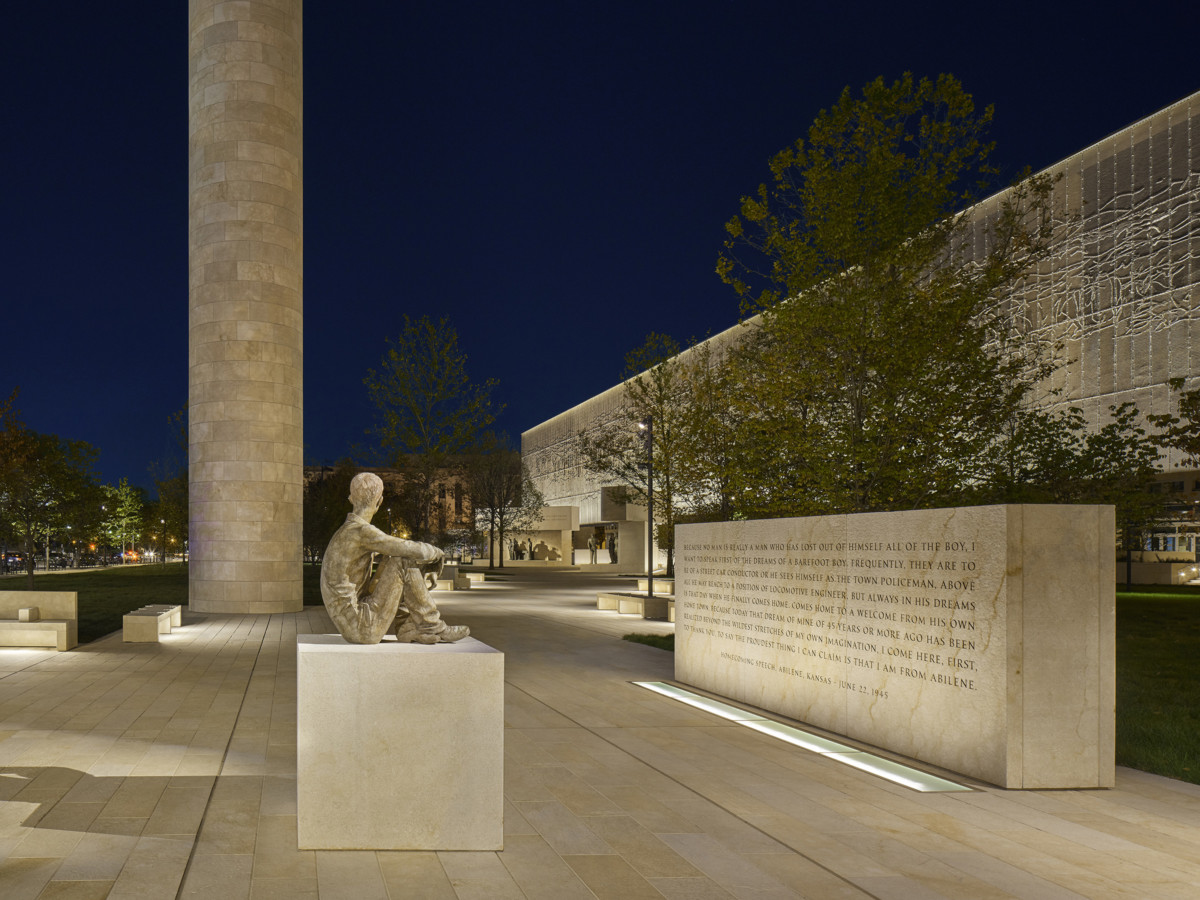 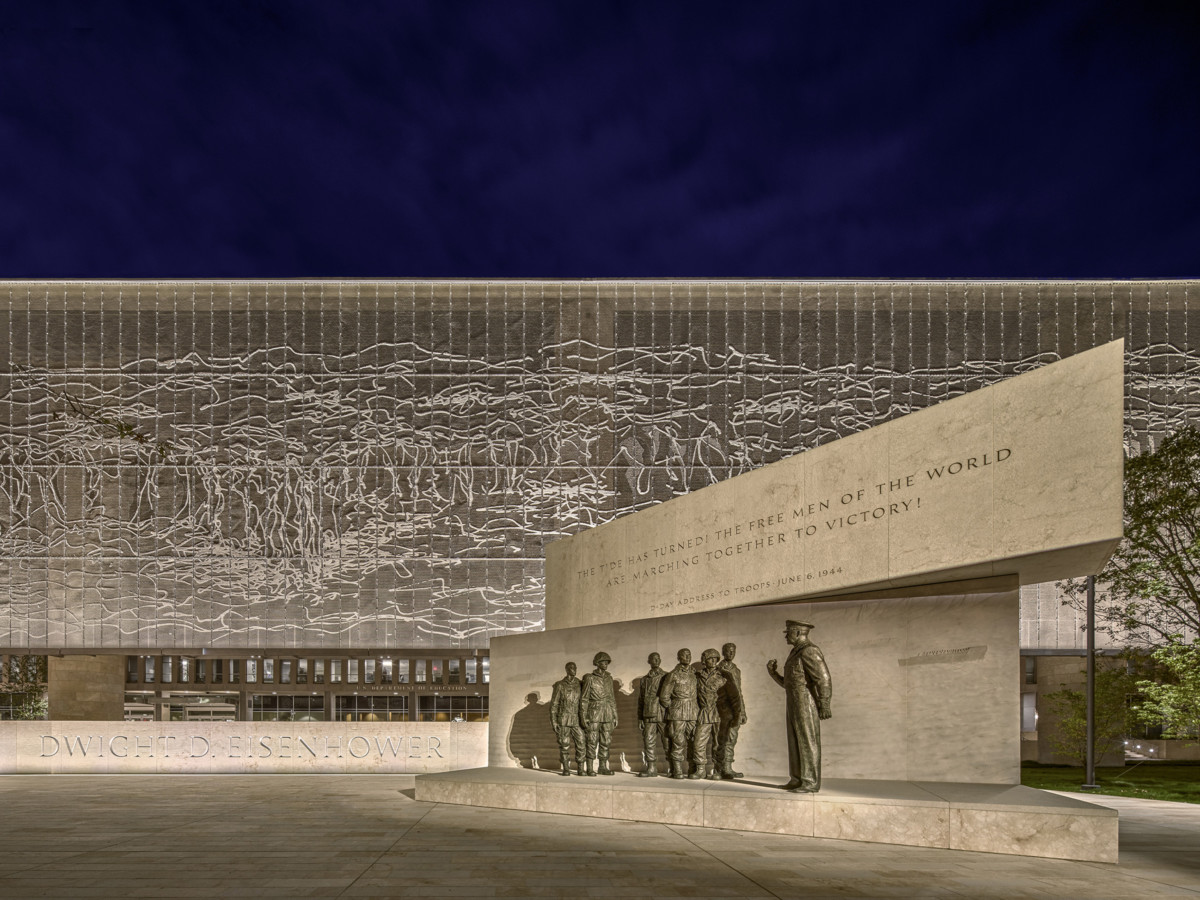 <
►
>
The Dwight D. Eisenhower Memorial in Washington, D.C. was completed at the tail end of summer after nearly two decades. (Halkin Mason Photography)

The Dwight D. Eisenhower Memorial in Washington, D.C. was completed at the tail end of summer following nearly two decades of contentious debates ranging from budget disputes to the rhetorical broadsides of advocates for traditional civic architecture. The project, led by Gehry Partners, is located on a full-block site on Maryland Avenue just off of the National Mall, and consists of a 4-acre landscaped civic space, and bronze sculptures and bas reliefs depicting the childhood and life of the Supreme Allied Commander and 34th President of the United States of America. Notably, the monument is backed by a monumentally-scaled steel mesh tapestry embedded with a luminous light display developed by lighting consultant L’Observatoire International.

The 450-foot-long tapestry is suspended across a colonnade of 80-foot tall cylindrical Spanish limestone-clad concrete columns and is 60-feet in height across the board. In relief on the tapestry is an abstract peacetime depiction of the cliffs of Normandy’s Pointe du Hoc, which, as Supreme Allied Commander, Eisenhower led the storming of during the operations of D-Day. Designed and fabricated by Los Angeles-based artist Tomas Osinski, the tapestry consists of over 600 panels with an approximate size of 3-by-15 feet, and is composed of millions of miles of steel cables and welds, which are, in turn, suspended across a tensioned mesh cable net system.

L’Observatoire International, a frequent collaborator with Gehry Partners, was brought onto the project at the early design phase. “For The Eisenhower Memorial, we started working very early with buildup and physical models of. Most of the time in our relationship with Frank and his team, we exchange ideas and discuss with Frank regarding the light and atmosphere he would like to create and then work our way in order to make it happen,” said L’Observatoire International principal Hervé Descottes. “The challenge was to create a very warm and intimate feeling in an outdoor space which is a memorial. It’s in the middle of the city so we had to make sure the street lights and city lights wouldn’t compromise the design we would create for the park and find the right tone of light and color of light reflecting on the stone in order to express the warmth that Frank was looking for.”

It should come as no surprise that such a complex and seminal project was subject to rigorous dialogue and testing from concept to completion. Early prototypes featuring the lighting system were developed at L’Observatoire’s office, upscaled to 15-foot-tall models for review, and, finally, examined as full-scale mockup on-site by the design, fabrication, and contracting teams; the latter two being FabriTec Structures and Clark Construction.

While the tapestry is legible during the daytime, it reaches a full crescendo at nightfall due to its elaborate light display. “Cantilevered in front of the tapestry structure is an open light trough that houses the linear LED lighting fixtures uplighting the tapestry but also the downlights lighting the raised overlook plaza below, and there are two rows of fixtures; the inner row of fixtures lights the bottom of the tapestry and the outer the higher part,” said L’Observatoire International senior associate Jenny Ivansson. “By combining two different beam spreads, separate dimming control, and aiming between the two rows, we were able to create a very even gradient from bottom to top. In total, there are 814 linear feet of fixtures, composed of 4-foot, 5-foot, and 2-foot fixtures daisy-chained together to best match the lengths of the troughs.”