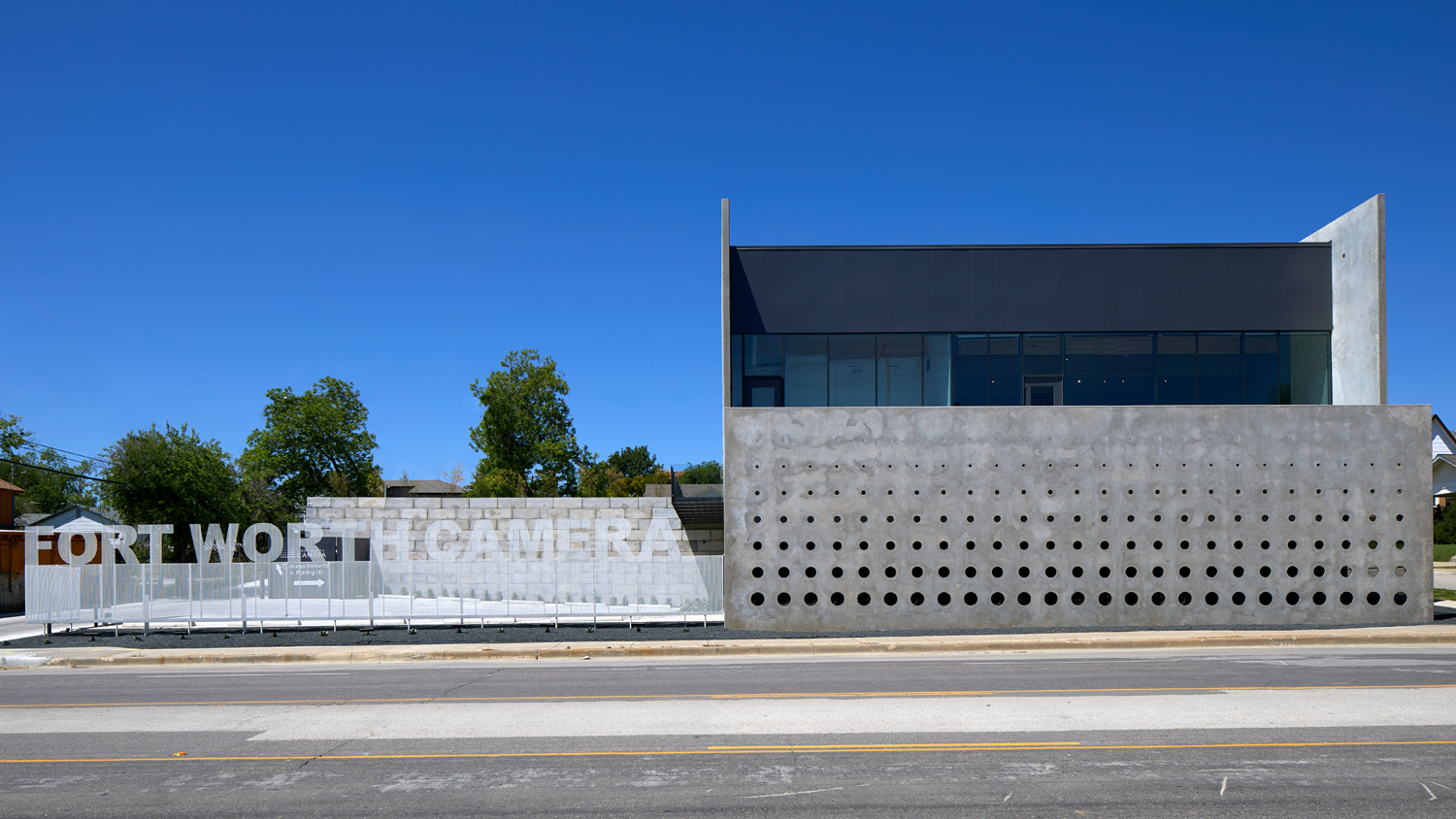 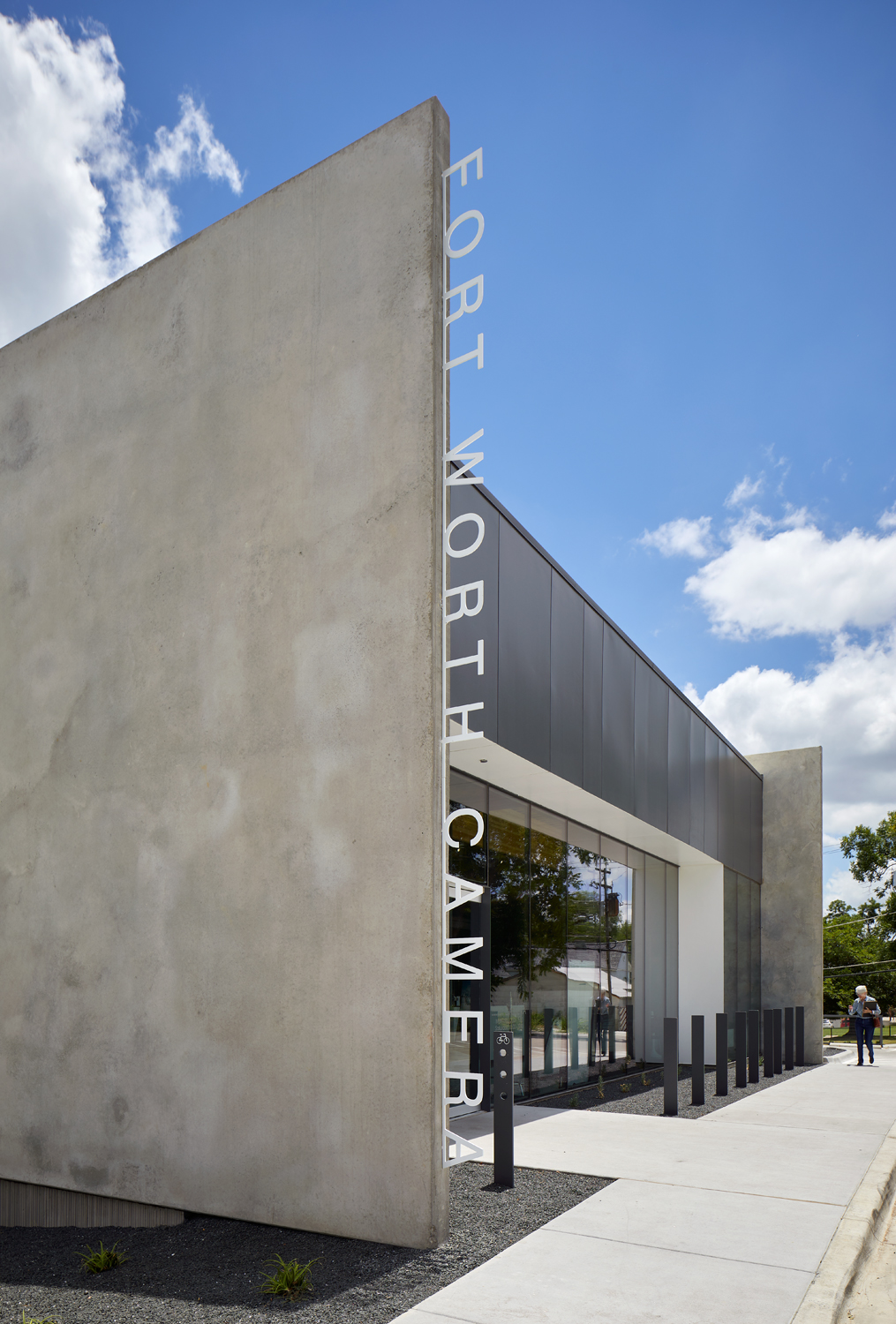 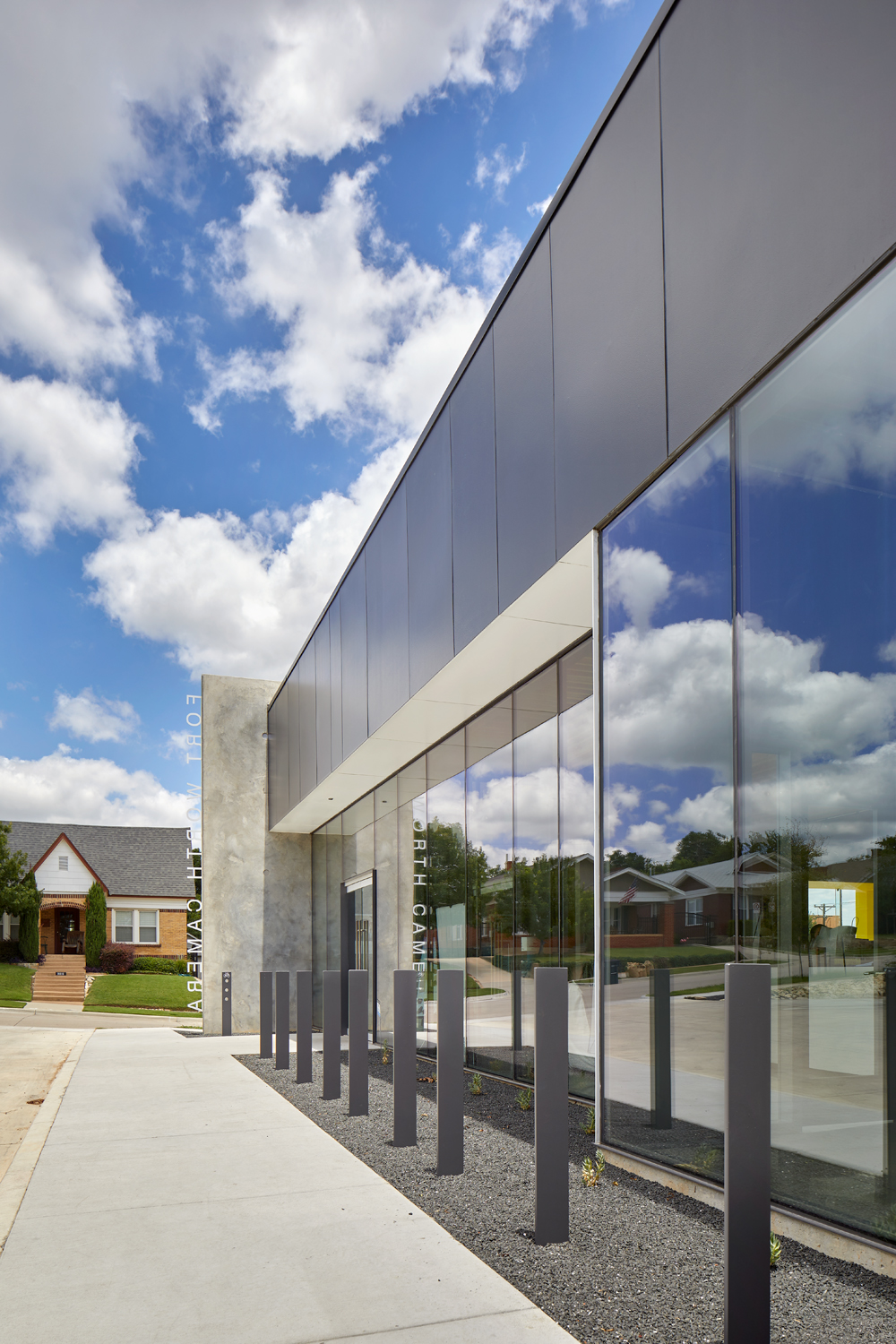 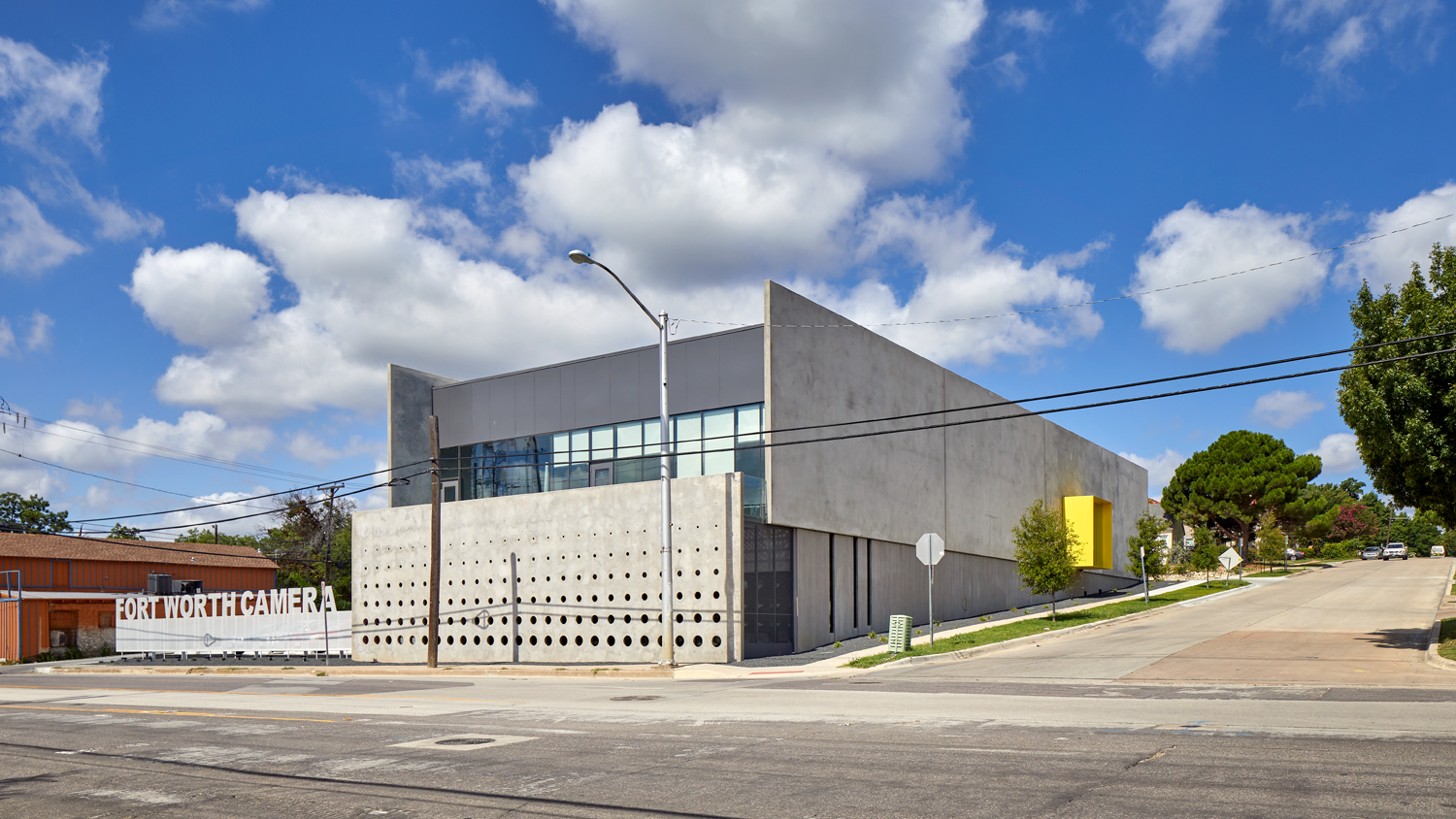 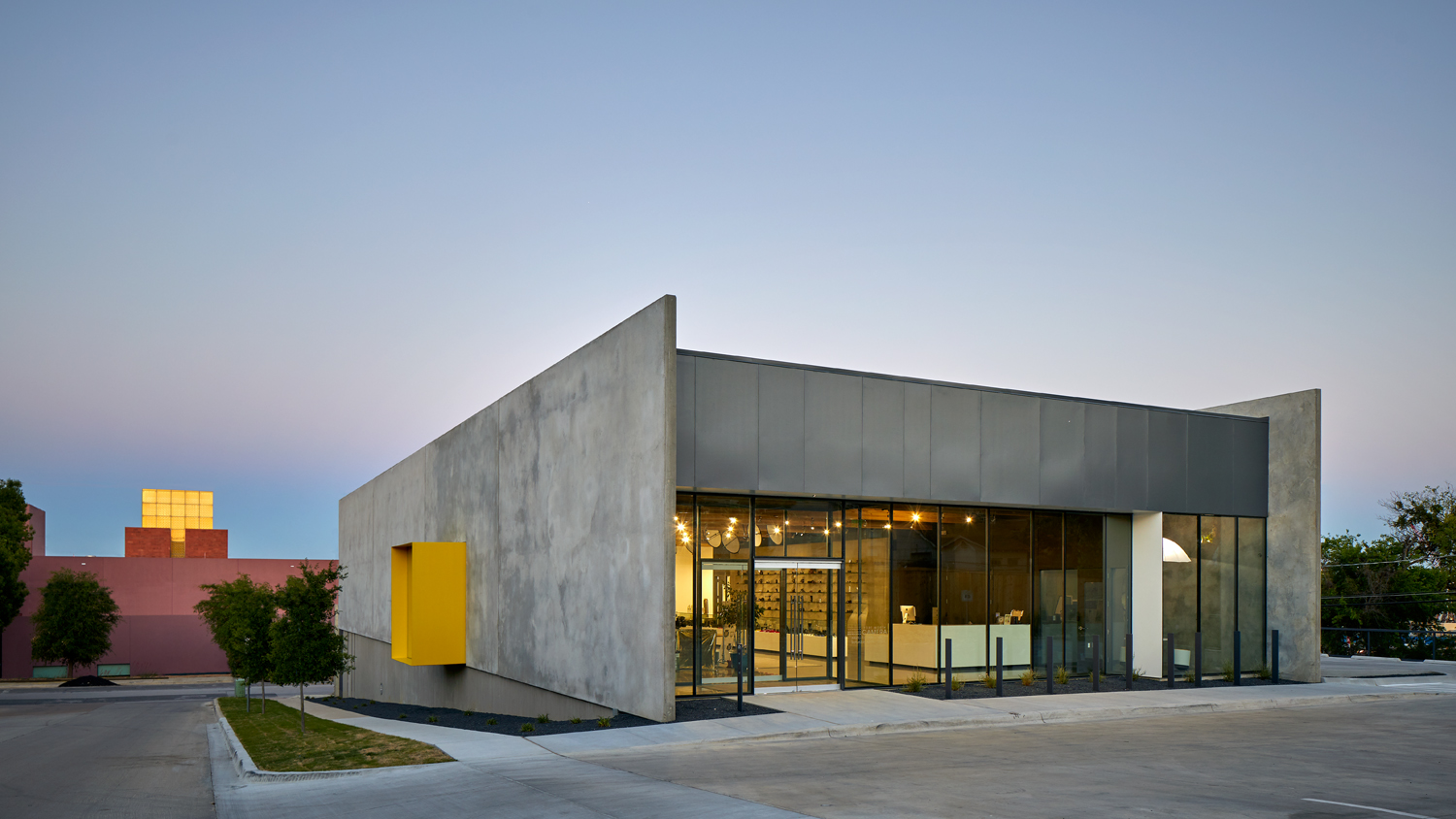 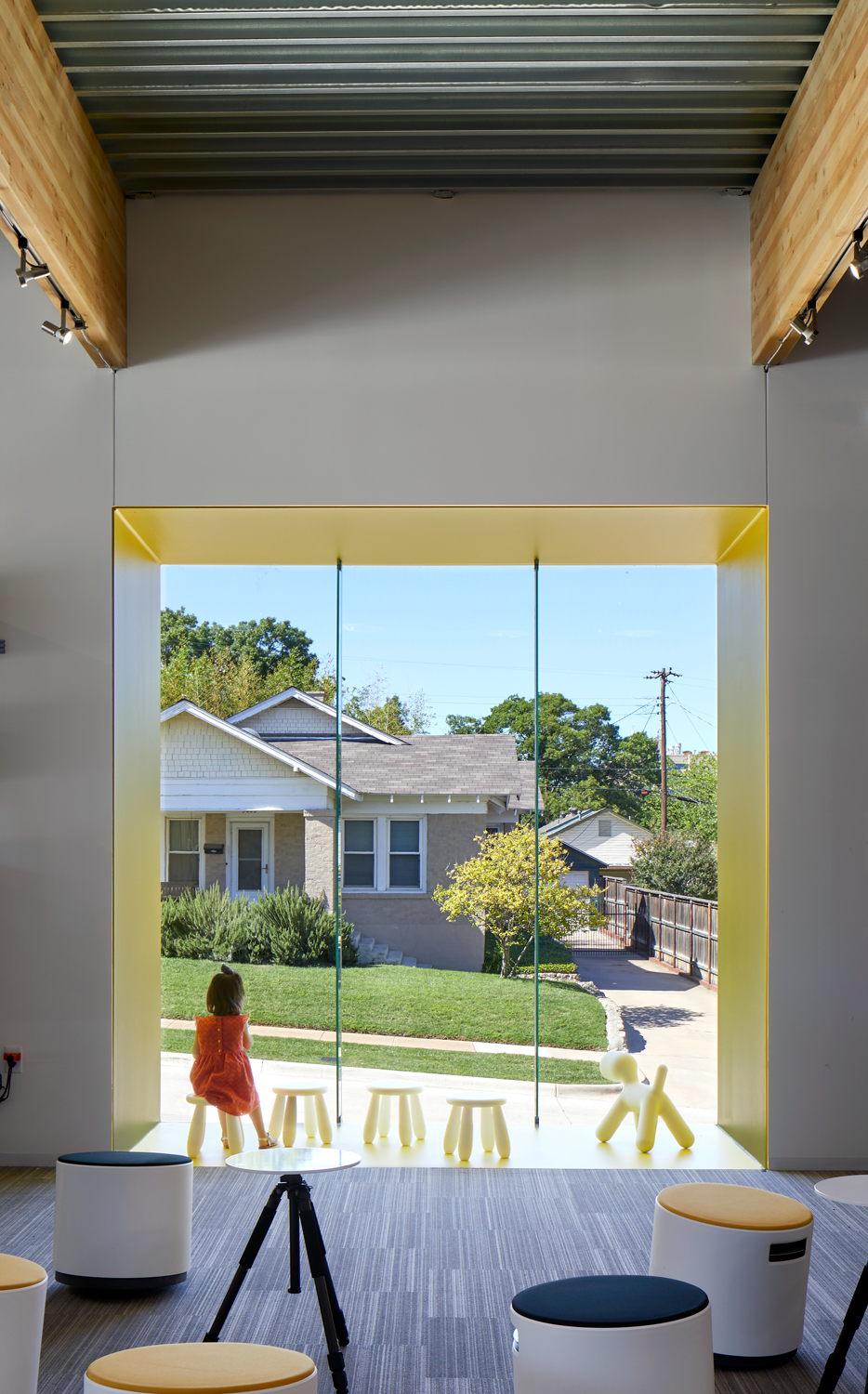 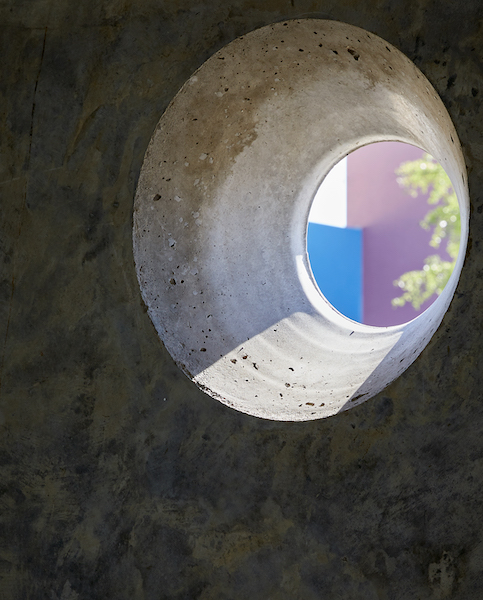 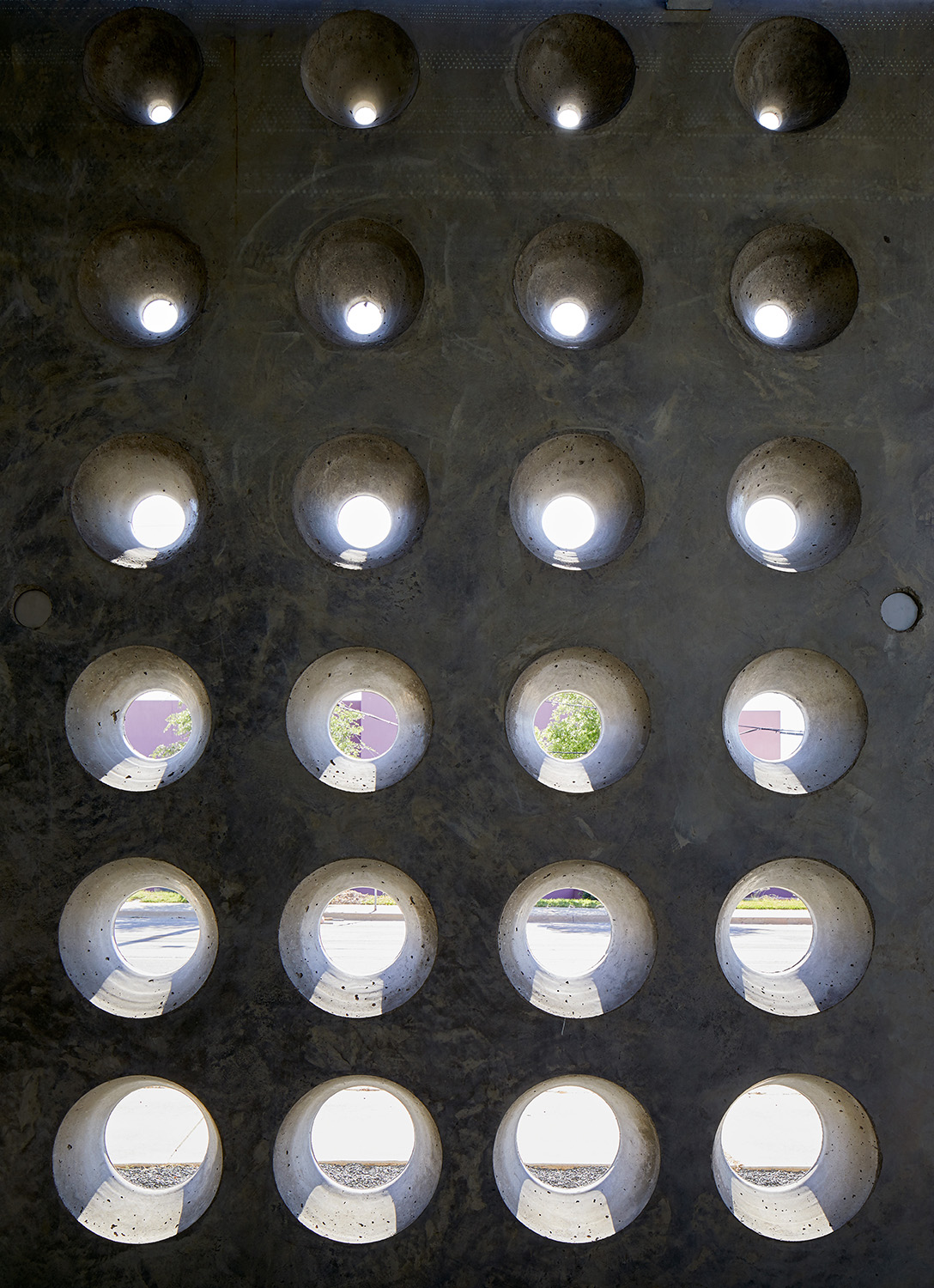 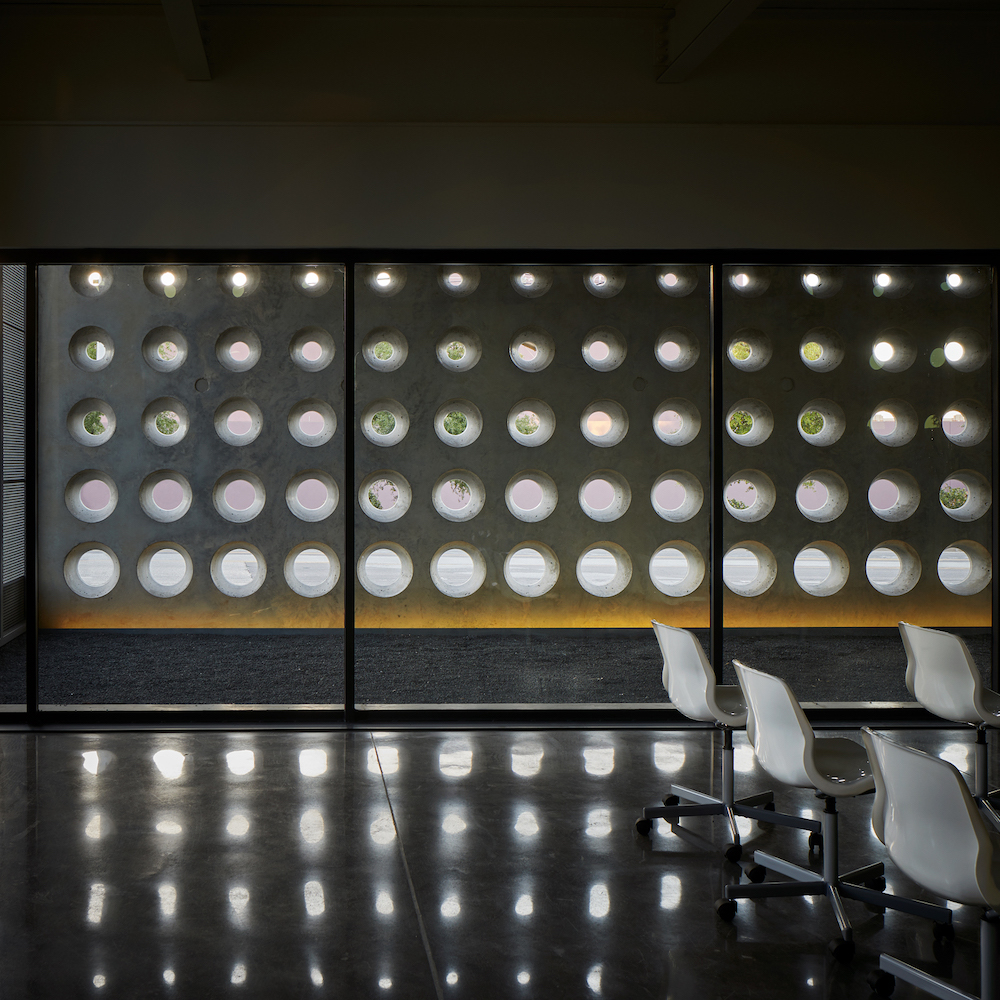 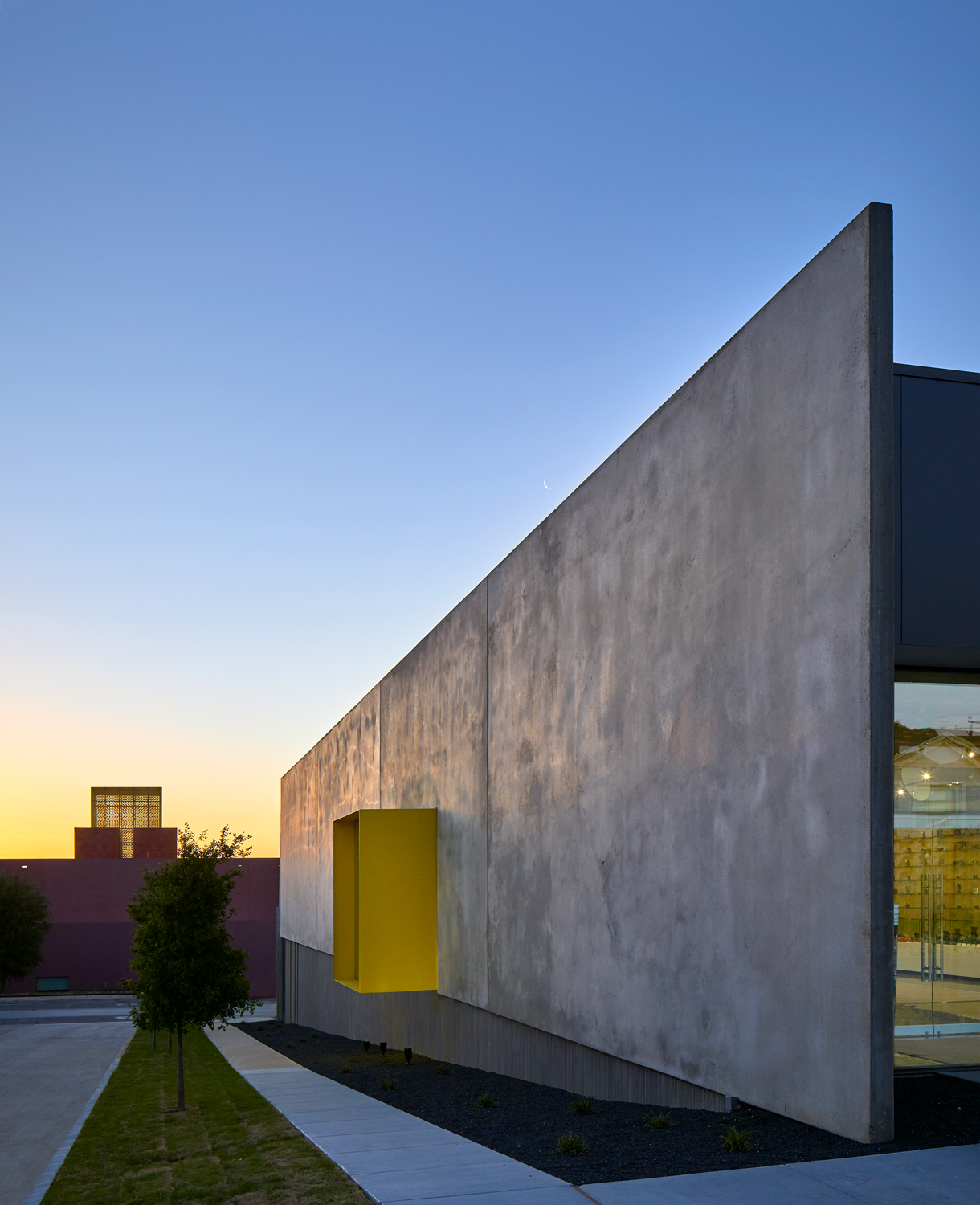 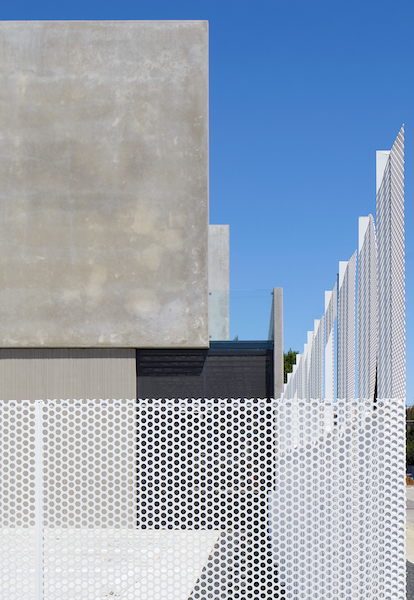 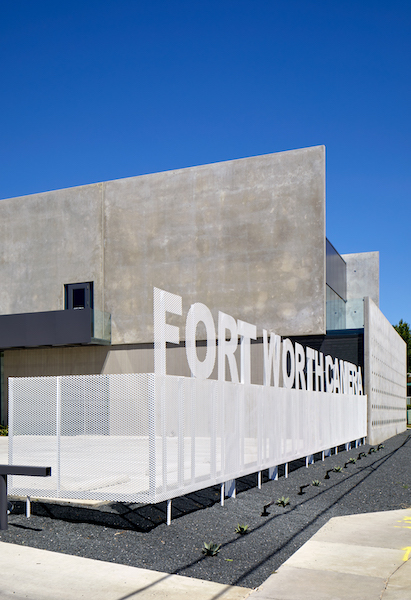 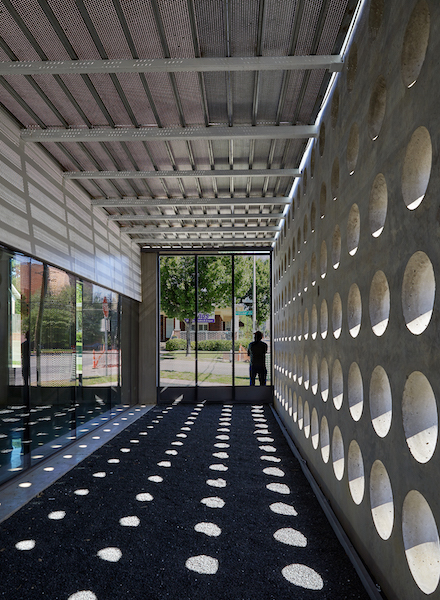 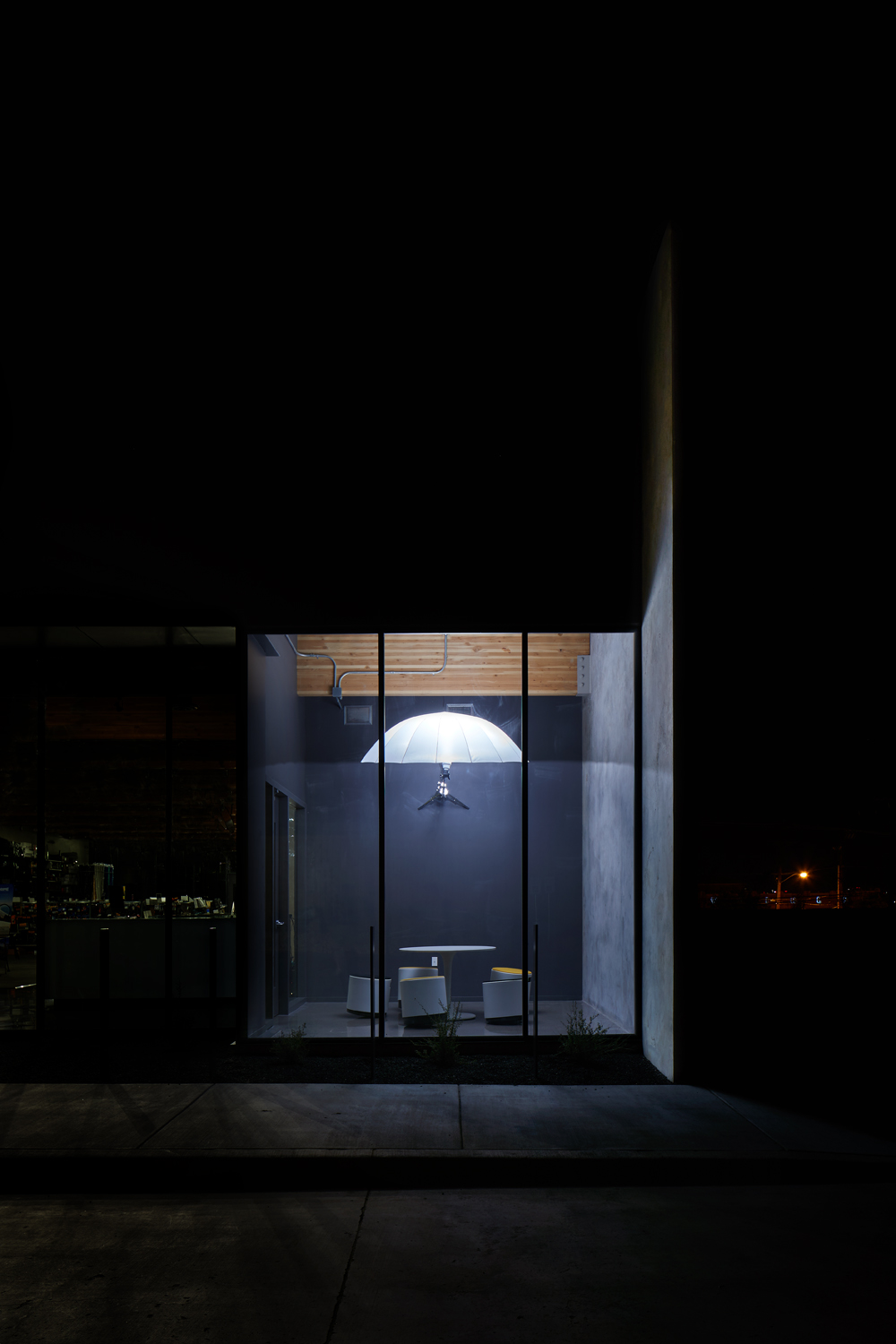 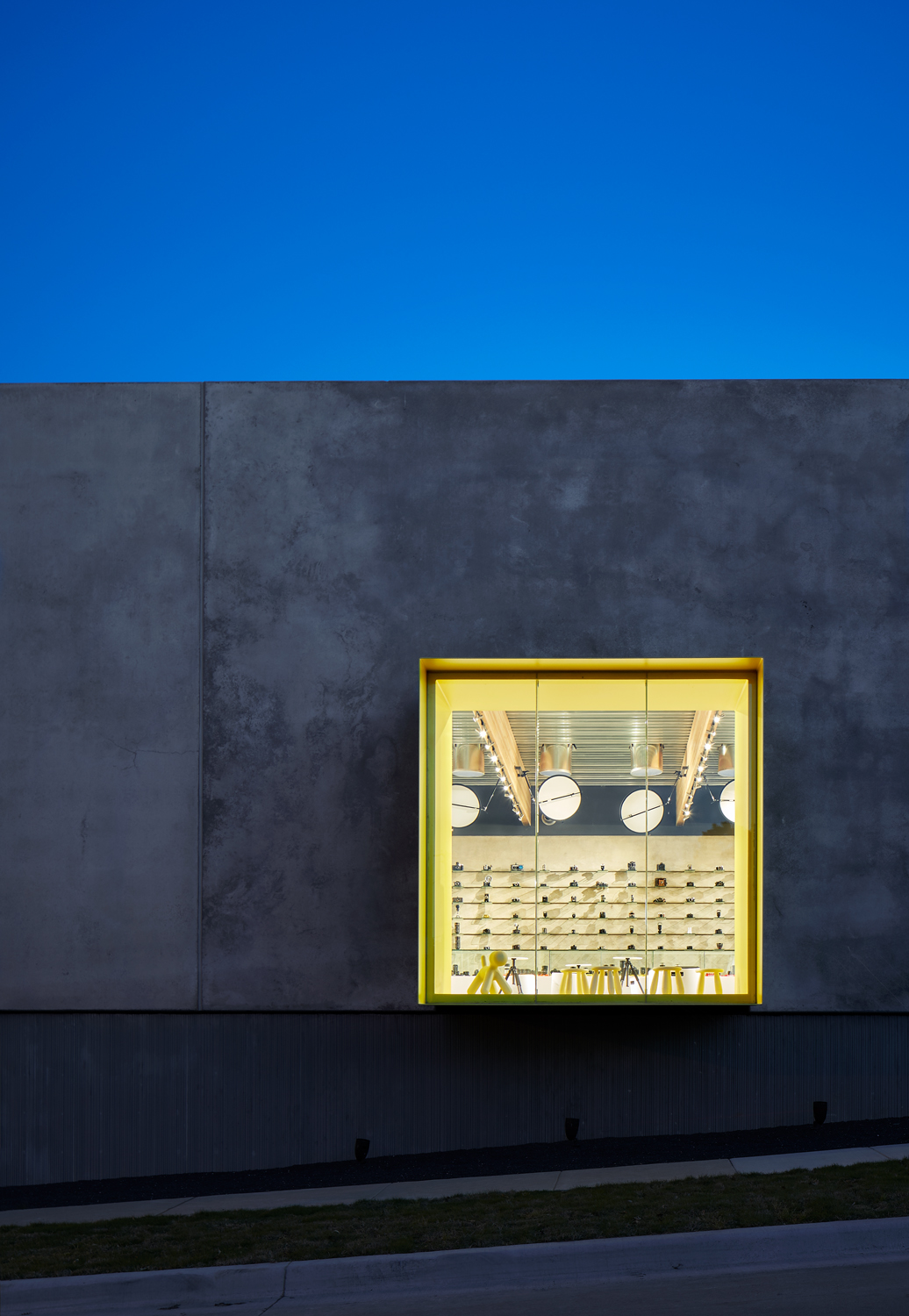 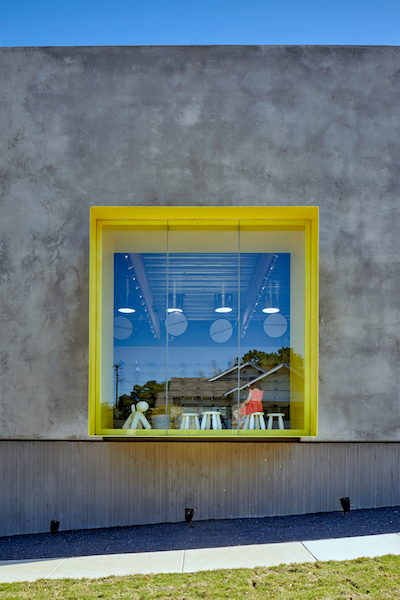 <
►
>
The Fort Worth Camera building, a new photography studio and retail space, sits between the museum and cultural district and the Arlington Heights neighborhood. (Dror Baldinger)

The Fort Worth Camera building, a new photography studio and retail space, is surrounded by notable concrete neighbors, the Modern Art Museum of Fort Worth by Tadao Ando and the Kimball Art Museum by Louis Kahn. Ibanez Shaw Architecture responded with its own concrete novelty inspired by the building’s program.

The primary facade is a site-cast concrete panel system which used tilt-up construction with steel anchors cast into the wall. The concrete wraps the perimeter of the building and transitions into an aperture screen on its most prominent street frontage. Ibanez Shaw decided upon concrete as the best material because security was a major concern for the client. The concrete provided protection at the street level and all the glazing on the building was either elevated above ground or made too small for a human to fit through.

The seven standard aperture settings of a camera lensinspired the design of the concrete feature wall. The shape and proportions of the apertures were directly translated from these lenses and then modified to make them into standard-size openings. The formwork for the wall was made by gluing wood blocks together, which were then vacuum formed into fiberglass. The array of 25 fiberglass shapes were filled with grout and then cast around to create the screen wall.

There was some initial concern about how the concrete would turn out. Bart Shaw, principal of Ibanez Shaw Architecture, told AN that with concrete, “you never know what’s going to come out. This big perforated concrete wall is going to sit across from the museum district, and when they lifted it out of the formwork it was pretty incredible.”

The fiberglass formwork gave each aperture a smooth finish and release which contributed to the aesthetic of the wall.

Aside from the concrete aperture wall, there is another distinguishable feature to the facade: a large window with a yellow steel enclosure. This glazing fronts a children’s area on the interior and creates a framed window nook that faces the adjacent residential neighborhood. It is also the only glazing on the north facade of the building. The rest of the glazing fills the east and west facades.