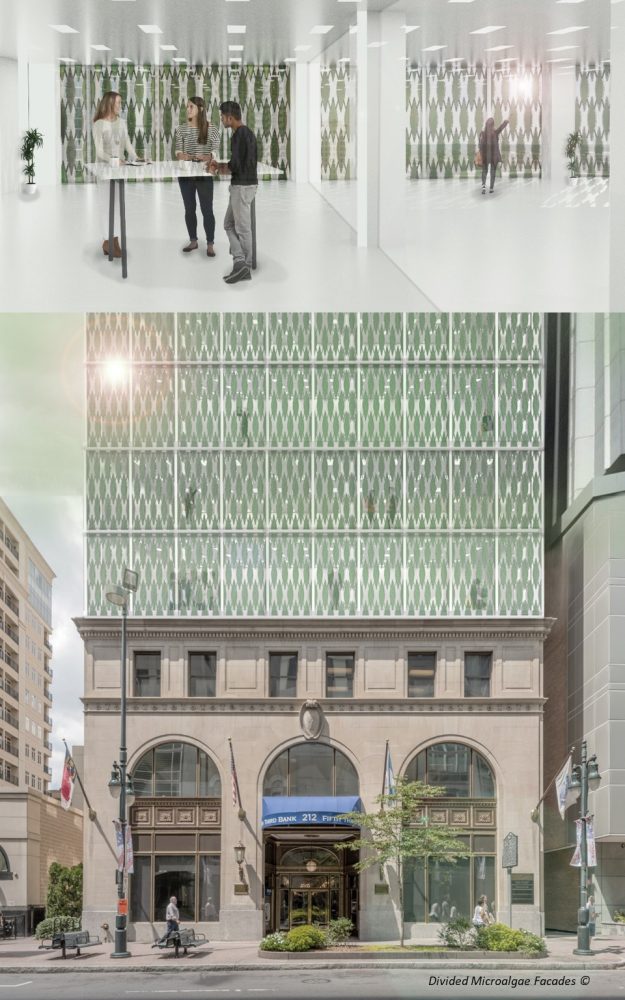 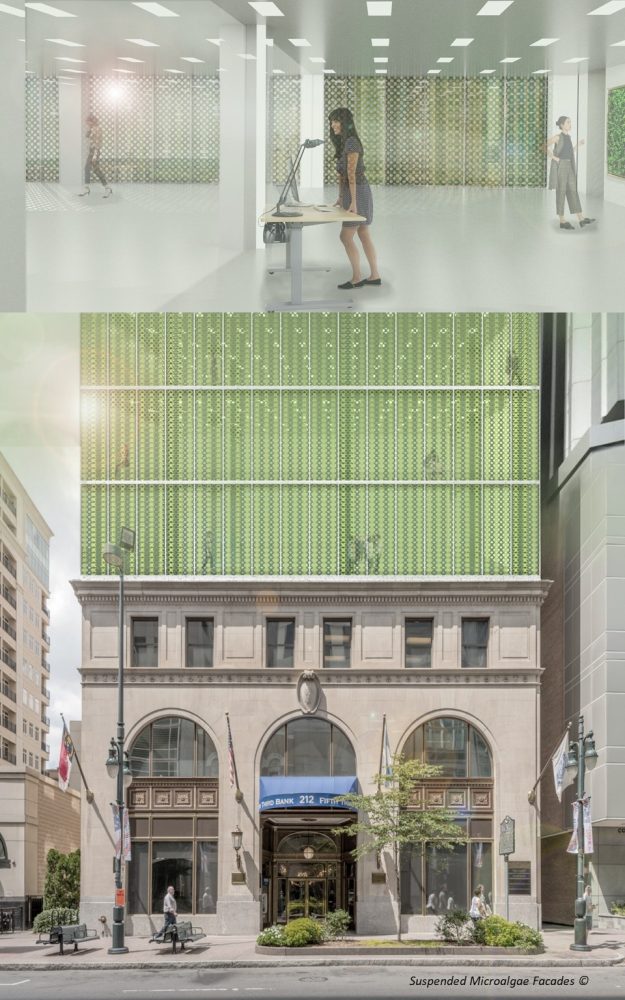 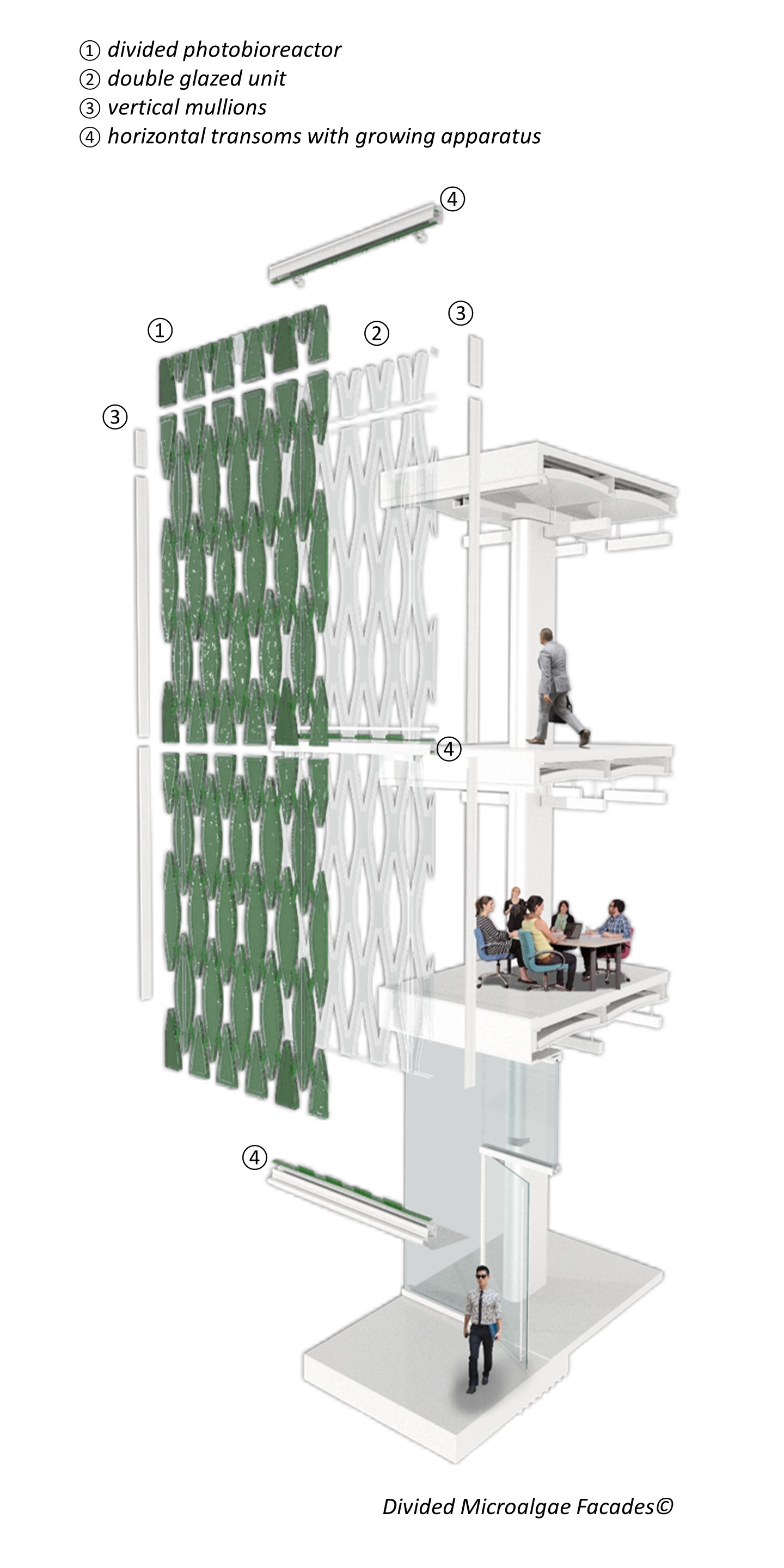 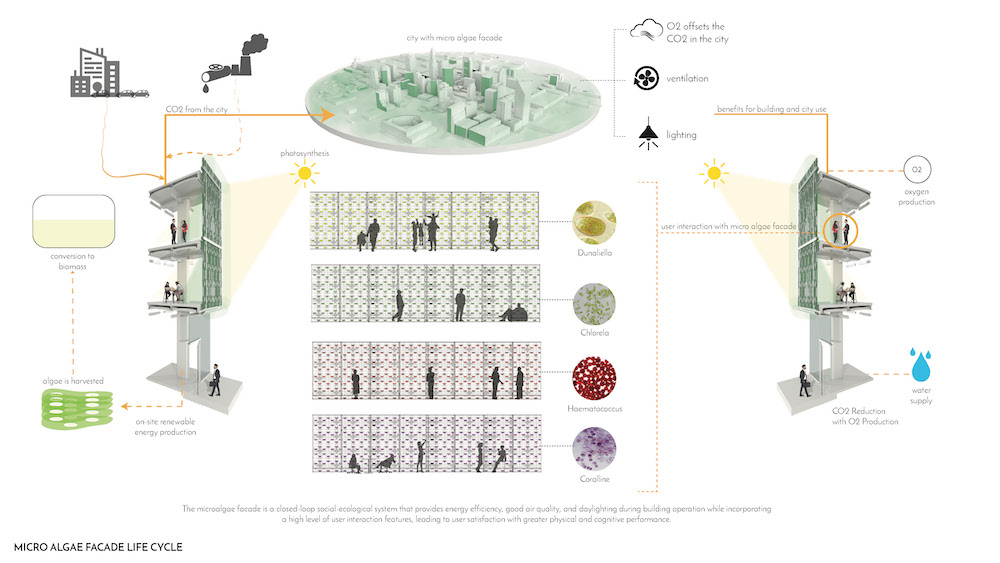 On the outskirts of Charlotte, the University of North Carolina’s Integrated Design Research Lab (IDRL) is hard at work researching new tools of building technology. Currently, the team is developing a unitized curtain wall prototype fitted with patterned bands of microalgae capable of filtering polluted air and converting it into a source of renewable energy.

The research lab’s microalgae facade prototype project began in the spring of 2012, and continued under Environmental Protection Agency and AIA research grants. The original team of two dozen students and faculty members, spanning the school of architecture, and the university’s engineering, biology, and construction management departments, carried out a feasibility study focused on the speculative retrofitting of the Charlotte campus’s Denny Building. The team discerned areas for considerable improvements in environmental performance as well as atmospheric carbon dioxide footprint. With this knowledge, the IDRL constructed multiple four-by-eight-foot physical prototypes allowing for the real-world analysis of environmental durability, structural integrity, and aesthetics.

“Our microalgae facade consists of two primary components: photobioreactors integrated with vision glazed panels attached to metal frames, and microalgae growing apparatus housed in metal frames,” said IDRL director Kyoung-Hee Kim. “For quality control and speedy installation, our microalgae facade is configured as a factory assembled unitized facade system, each facade unit could be installed at the edge of the concrete slab or perimeter beam, with the microalgae growing apparatus installed on site.”

How does it work? Unfiltered air laden with carbon dioxide rises through the base of the curtainwall modules. The air is filtered as it rises through the matrix of the algae-embedded facade and is subsequently pumped into the building’s HVAC system. Fresh microalgae are pumped into the top of the curtain wall module as the density of carbon dioxide increases. Serving as an air filter, the carbon-loaded algae is subsequently collected, dewatered, and either converted into energy on-site or transported to an outside refinery.

There are additional benefits to the algae facade outside of air filtration and renewable energy production. Similar to glass curtainwalls studded with frits or brise-soleil, the patterned algae provide shading. Additionally, the color of the patterns is semi-customizable depending on the type of algae—Dunaliella, Chlorella, Haematococcus, or Coralline–embedded within.

While prototypes for the research project have not yet been installed for full-scale development, Kim went on to note that “this technology is expected to have significant building energy reduction due to its good energy attributes and energy production potential. The US Department of Energy seeks to attain marketable net-zero energy buildings by 2025, and the project lays the technical foundation for future green buildings.” Let’s see what the future holds.