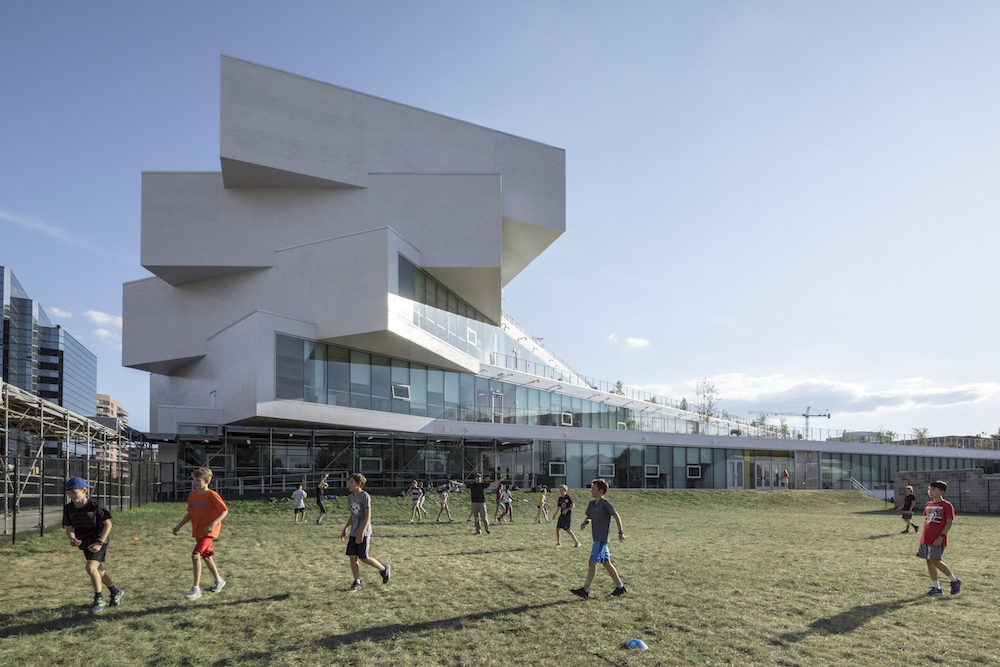 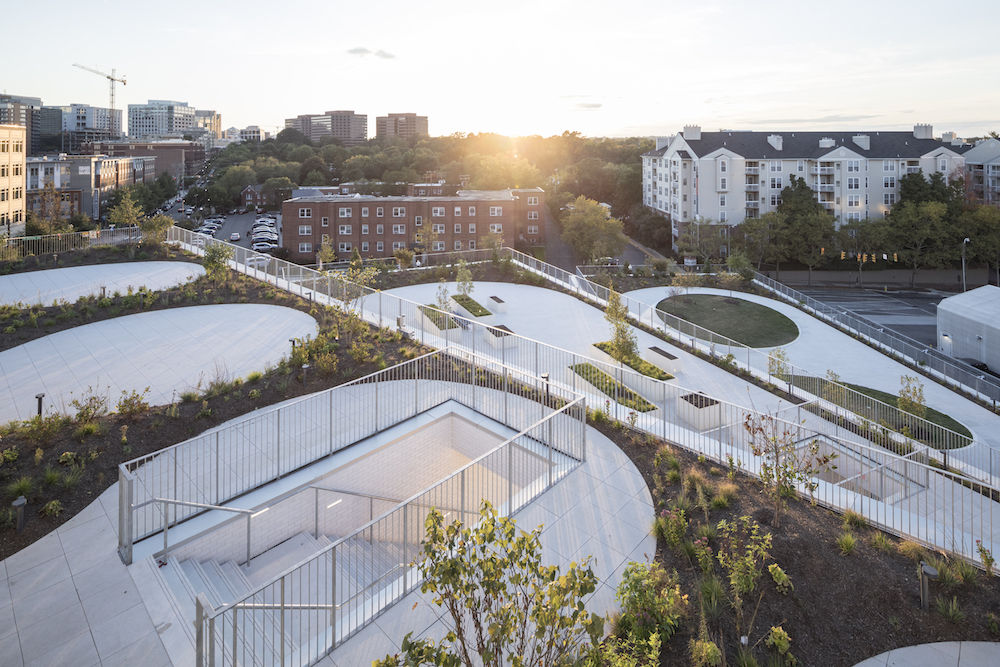 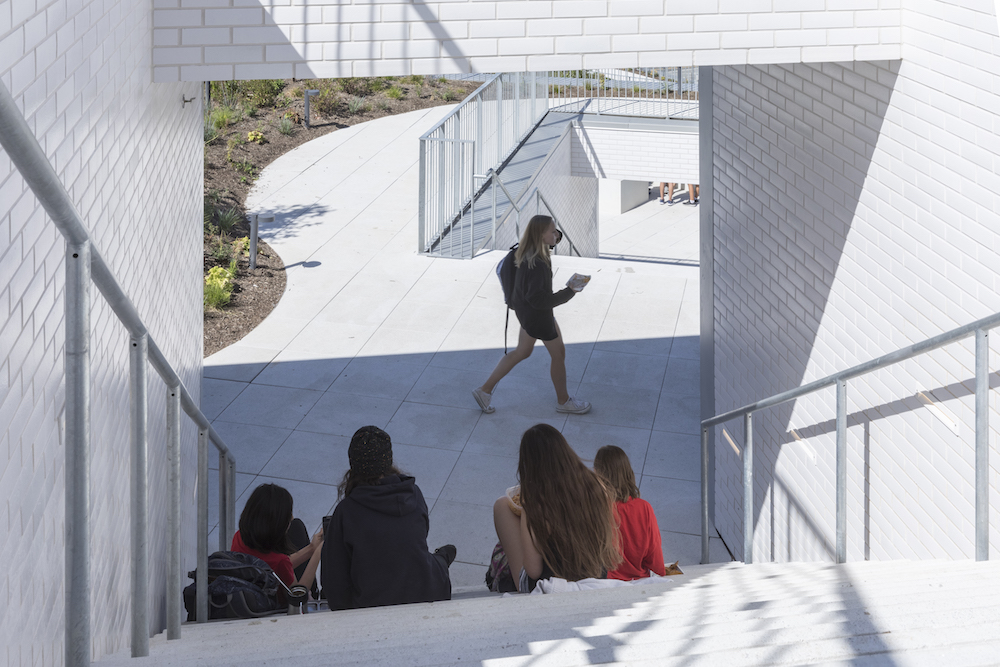 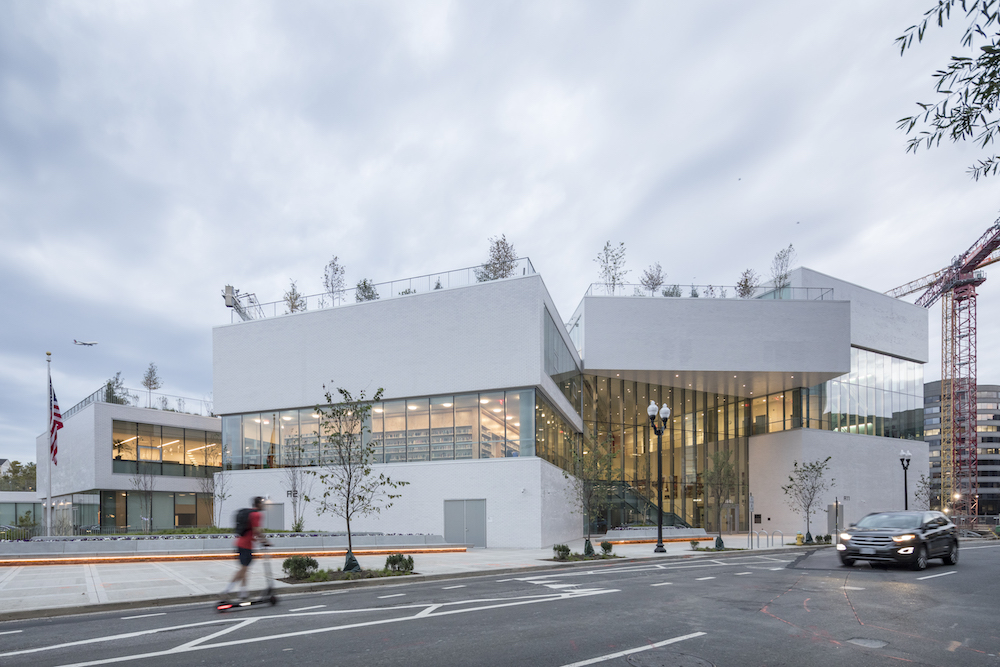 <
►
>
The Heights is a new secondary school in Arlington, Virginia, designed by BIG with LEO A Daly serving as the architect of record. (Laurian Ghinitoiu)

The Heights, located in Arlington, Virginia just across the Potomac from Washington, D.C., is a new academic campus that complements the relatively low-slung and conservative architecture of the context, and offers an compelling approach to public space. Designed by Bjarke Ingels Group (BIG) in collaboration with architect of record LEO A DALY, The Heights consists of stacked and pivoted volumes clad with a white brick rain screen and laminated insulated glass units.

Commissioned in 2015 and completed in the fall of 2019, the 180,000-square-foot project merges two primary schools within the Arlington Public Schools system; the performance arts-focused H-B Woodlawn Program and the specialized-needs driven Eunice Kennedy Shriver Program.

The primary point of reference for the BIG and LEO A DALY was the ubiquitous post-war school building typology found across the country; a more-often-than-not utilitarian structure defined by a rectilinear form and reddish-brown brick, enclosing double-loaded corridors. The design team applied this basic treatment to each of the project’s five volumes, but, in a flourish that creates sprawling outdoor space at each level, pivots each floor in a fanned layout linked by two central cascading stairs.

A white brick rain screen is the dominant element of this facade, and they are applied here to mesmerizing effect as cladding and soffit. “The twisting of the building also required the brick facade to seamlessly transition from the layout at the lowest level all the way to the highest level, as all five stories are connected at the pivot,” said BIG senior architect Tony-Saba Shiber. “As such, extensive coordination work was done with the brick module to ensure openings were sized per the module and the intersection of each building volume occurred at a dimension based on the brick module.”

Glazing is largely oriented towards the north and south, and are arranged in floor-to-ceiling 3′-6″ by 11′-6″ modules backed by a YKK curtain wall system. The horizontal bands of fenestration, which are colored teal from glass substrate and coating treatment, are framed by the brick rain screen at the floor slab and corner.

Structurally, the staggered cantilever—as well as the weight of terraced landscaping—posed several challenges, and the design team collaborated closely with engineering firm Silman to optimize load path and reduce the number of columns located at the ground floor. The solution; each terrace pivots with a truss-and-buttress system that transfers diaphragm loads, from gravity and lateral forces, tied back to the foot-thick perimeter of the concrete-and-rebar core’s welded deformed bar anchors with embedded steel plates. The application of shallow steel framing for each volume, as well as the lightweight qualities of a brick rain screen system, further reduced load across the structural system.