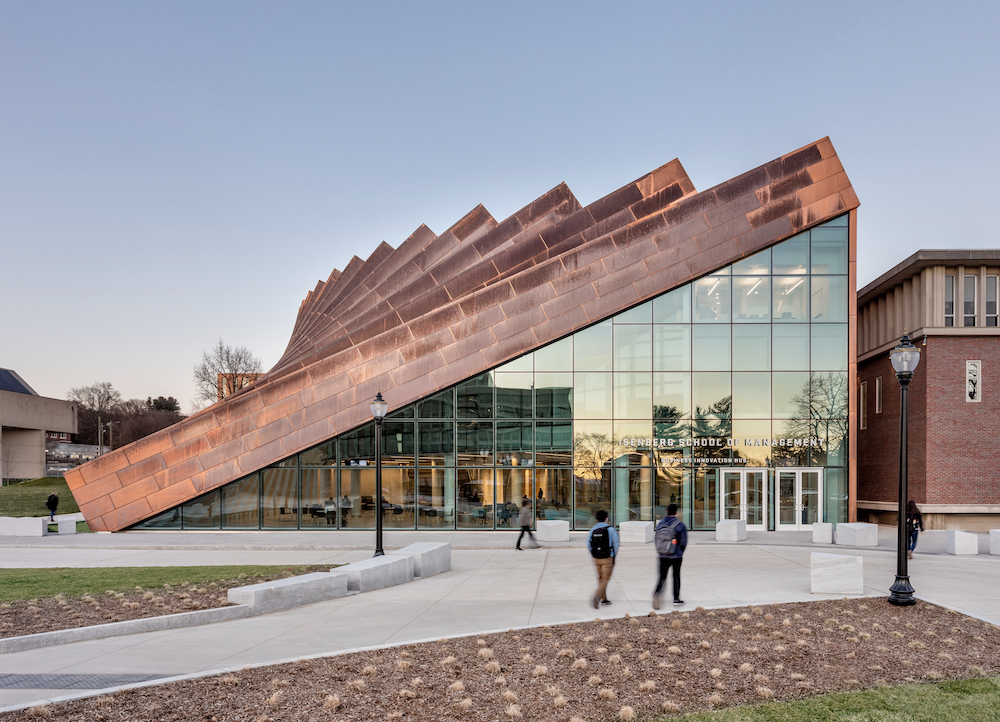 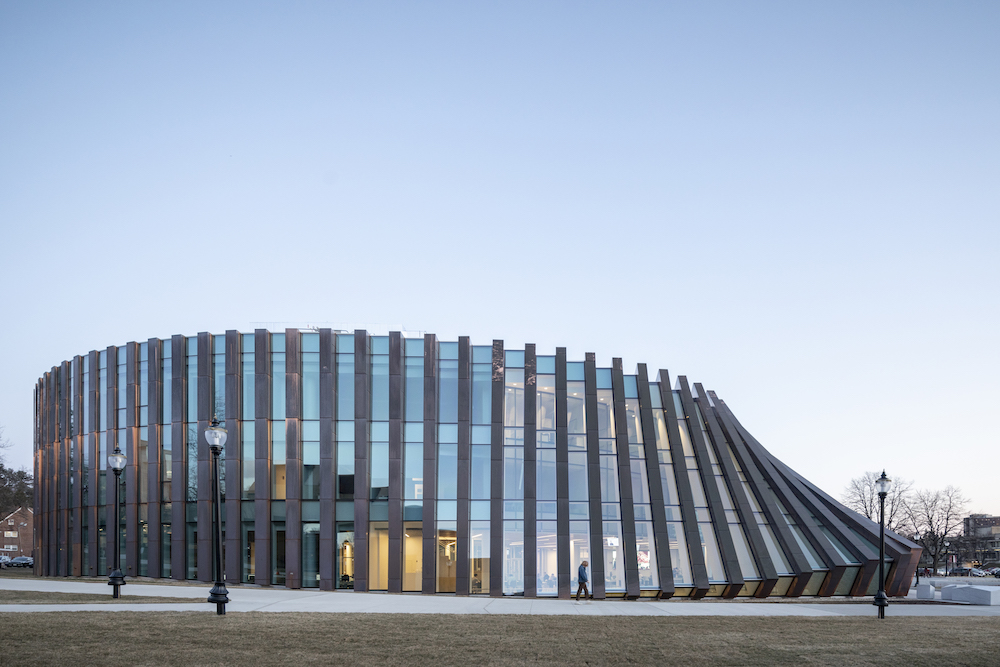 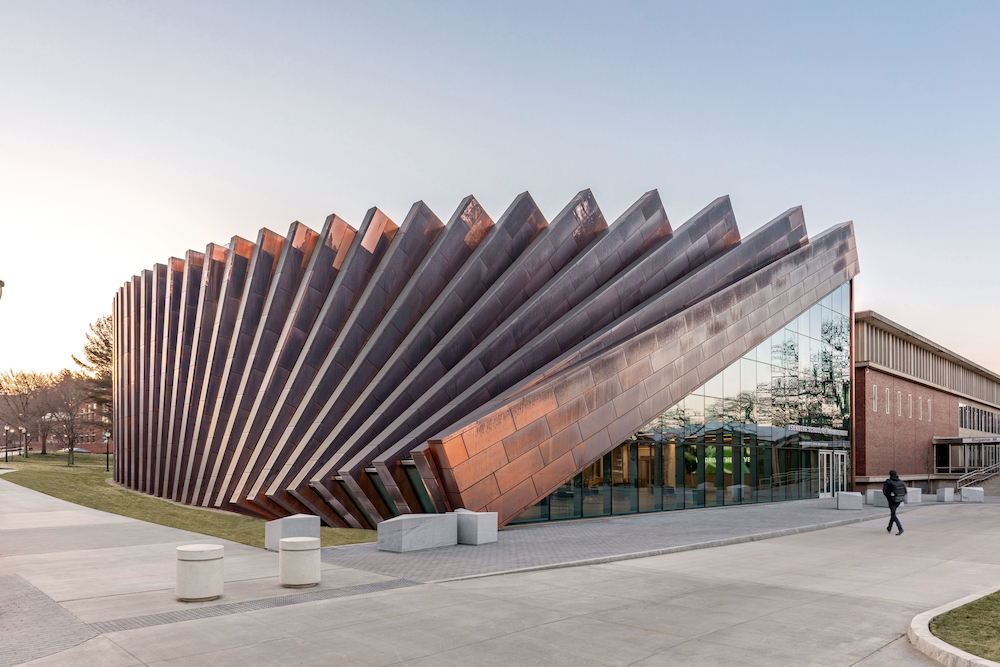 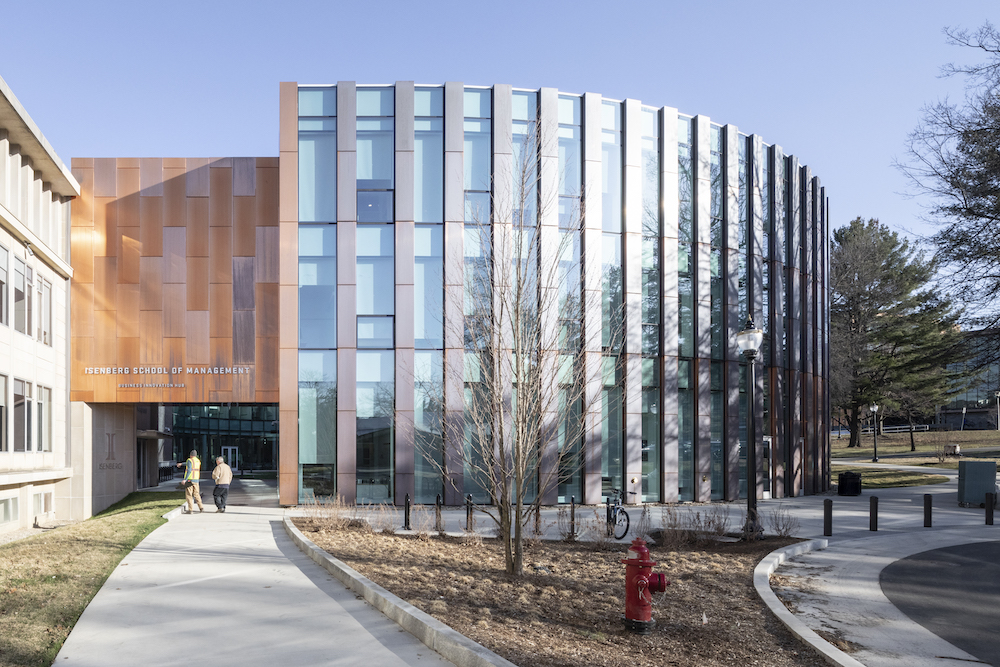 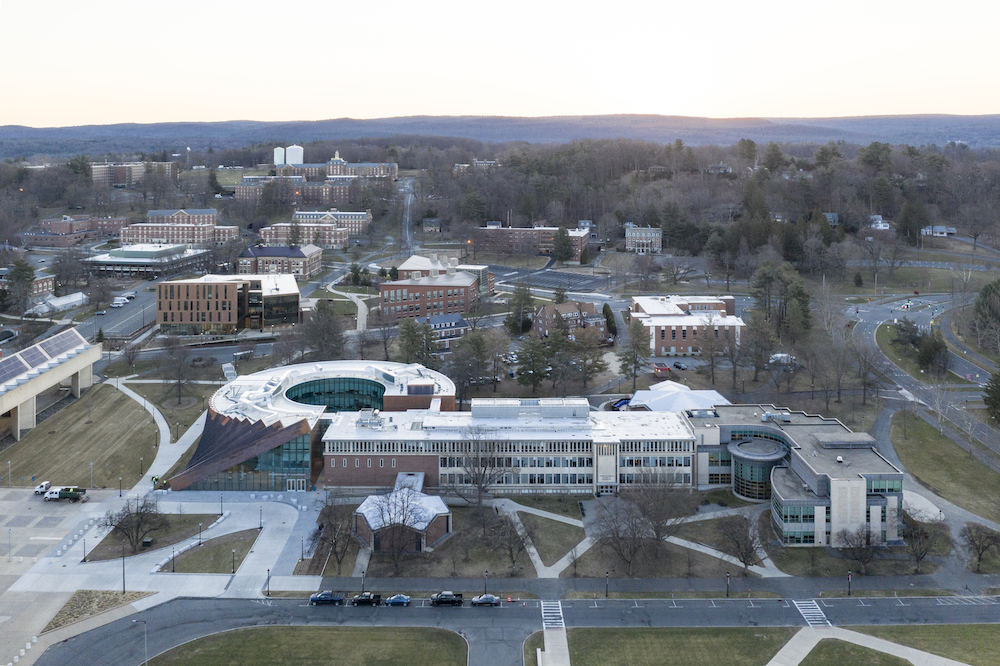 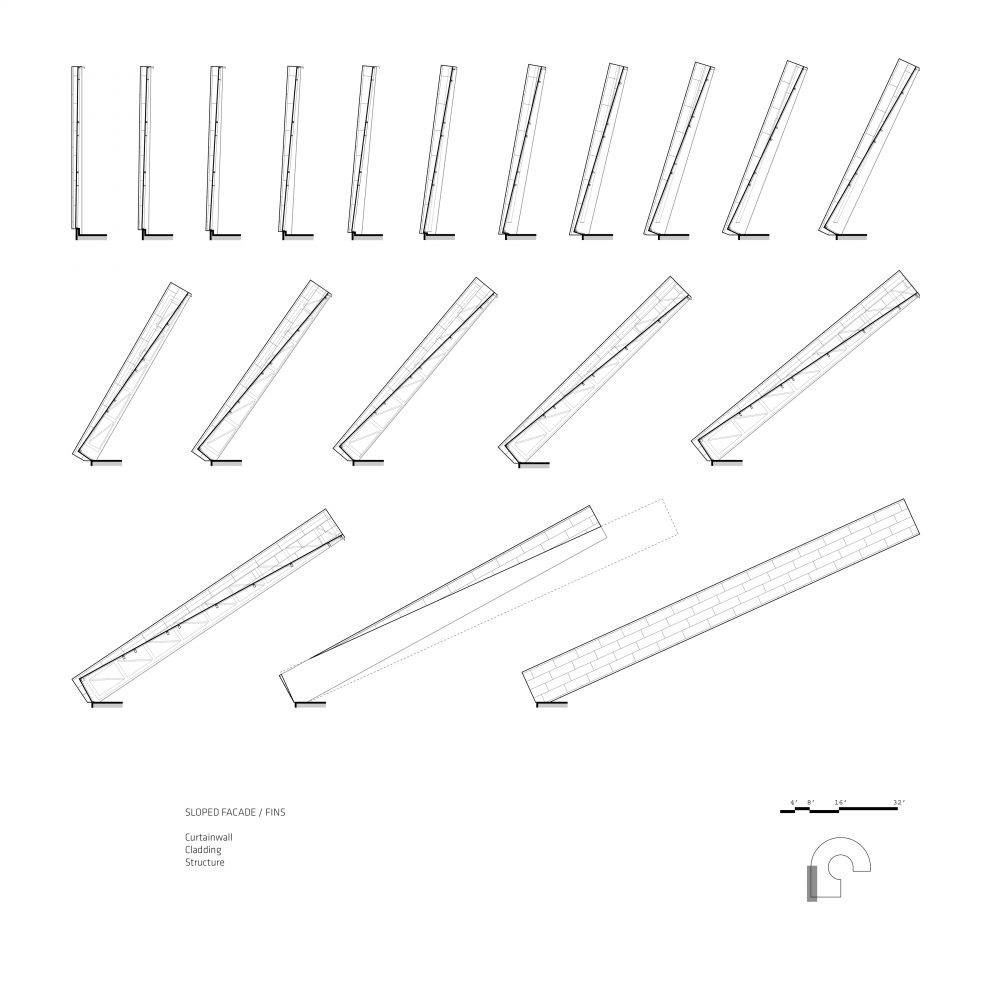 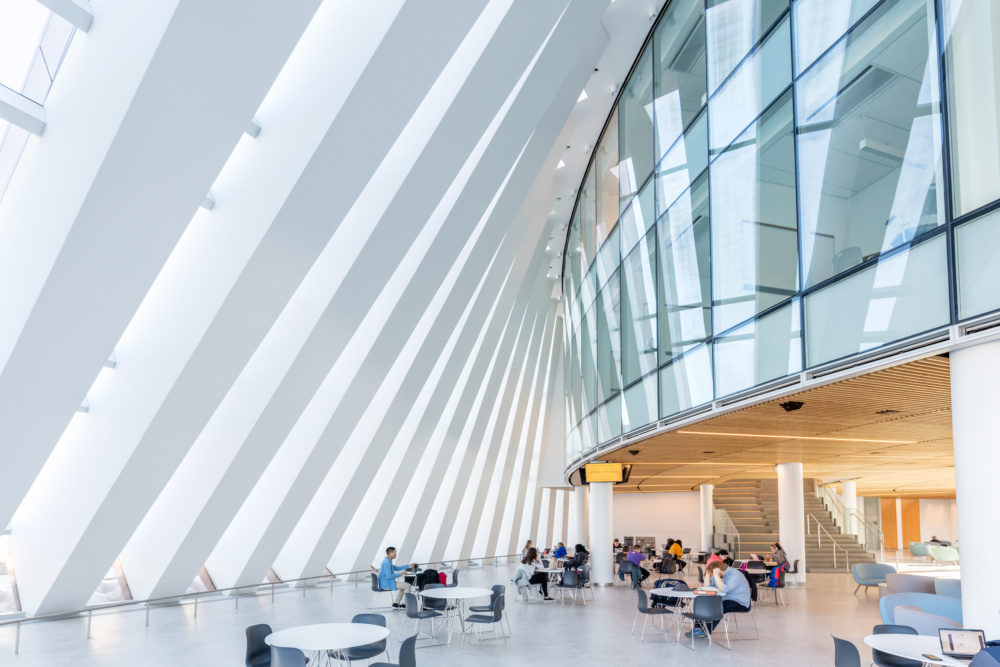 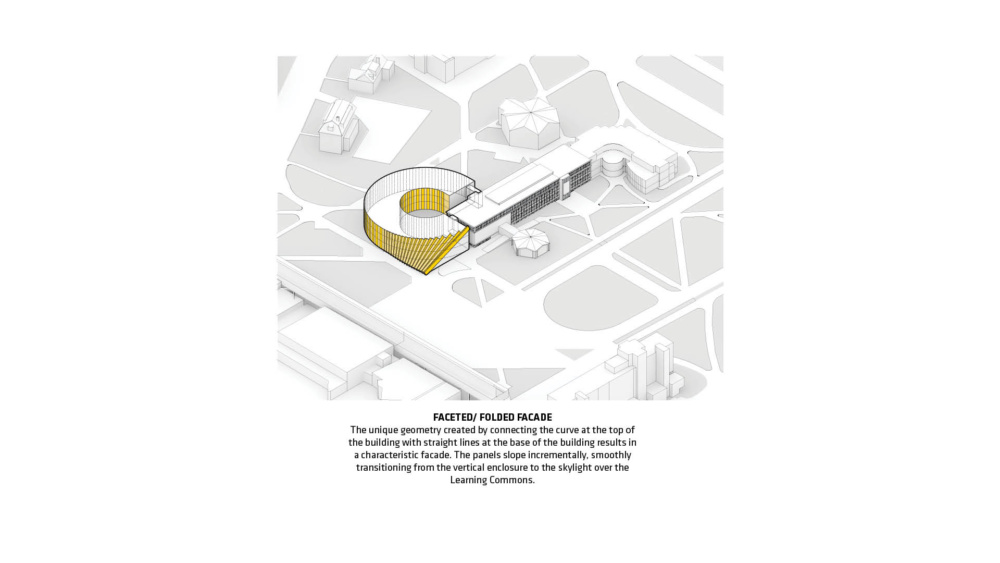 <
►
>
The project was a collaboration between BIG and architect of record Goody Clancy. Simpson Gumpertz & Heger served as facade consultant. (Laurian Ghinitoui)

Located on the outskirts of Amherst, Massachusetts is a new expansion for the University of Massachusetts Amherst’s Isenberg School of Management. The building, designed by Bjarke Ingels Group (BIG) in collaboration with architect-of-record Goody Clancy, adds a new 70,000-square-foot study and social space for approximately 150 faculty members and 5,000 students. The massing of the extension resembles the imposing circular layout of an ancient amphitheater, swapping out the Roman arch or Greek pillar for facade-height strips of copper cladding and glass curtain. For the bulk of the enclosure, the copper-clad concrete piers rise perpendicular to the ground level, but ultimately stagger and fall atop each other in a domino-like effect.

UMass Amherst is the flagship campus of Massachusett’s state university system, and as a result, possesses a broad range of architectural styles and building scales. The Isenberg School of Management moved to its current site in 1964, a rectilinear three-story building defined by concrete and red brick. An extension was added to the southern elevation of the original building in 2003, and BIG’s design effectively continues this trend of growth along the north elevation.

According to BIG project leaders Yu Inamoto and Hung Kai Liao, “the conceptual move to create the building massing and space inside the Isenberg Business Innovation Hub was actually a rather simple one—a loop originating from, and connecting to, the existing building then stretching one point of that volume to create a multi-story space.”

Across the facade, each individual copper module is two-feet in width and the glass curtain three-and-a-half feet wide. In comparison to the rest of the extension where the copper panels are placed one atop the other, the far more visible eastern elevation is laid out in a diagonally pitched stretcher bond format. The panels themselves are clipped to aluminum rails fastened to a sheathing clad cold-formed framing structure produced by Ace Panel Worx.

The primary stylistic flourish of the project is the domino-like effect found at the entrance of the building, a remarkably complex structural feature that remains visually consistent. “Even before they start to pitch, the depth of the pillars from the glass gradually increases,” said Goody Clancy Senior Associate George Perkins. “The first few pitched pillars are framed with steel studs, but then structural steel tubes are introduced, and eventually steel trusses. The metal panels and joint locations had to negotiate this changing structural condition.”

For Simpson Gumpertz & Heger, who collaborated as facade consultant for the project, a detail of particular importance were the many of transitions present in the envelope. The copper, which only functions as cladding, is backed by an air and water barrier that is integrated into the glass system.