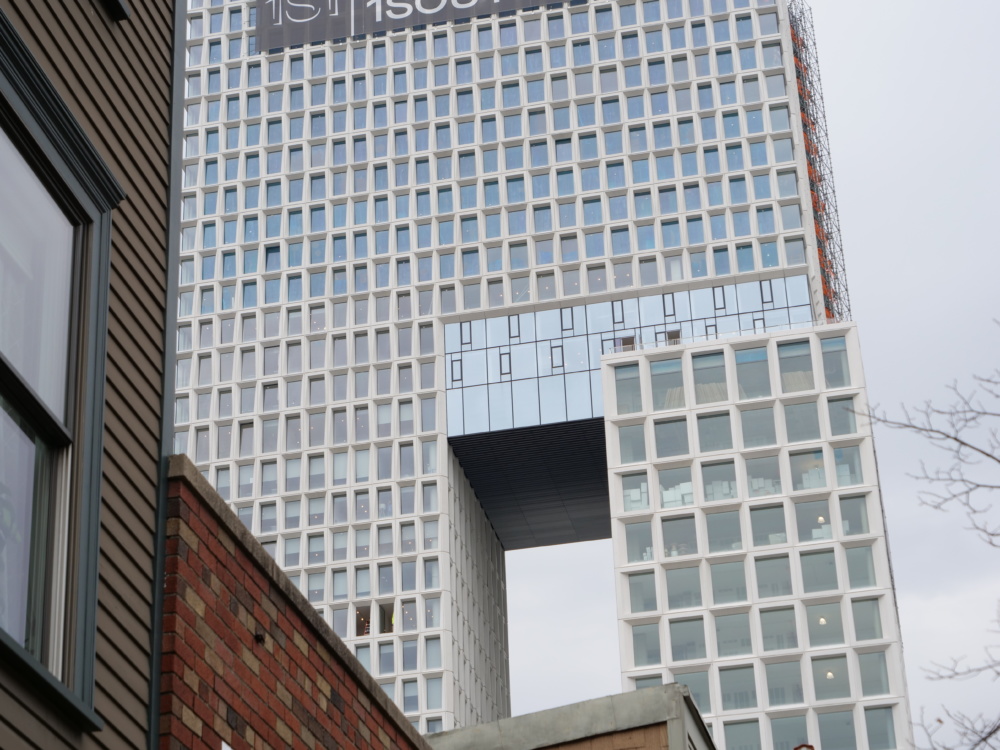 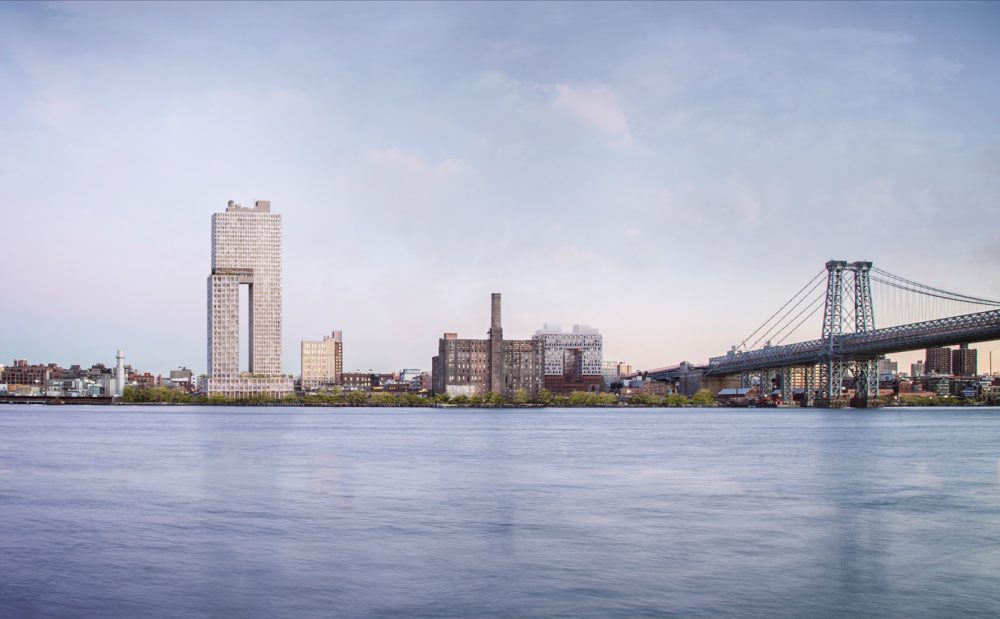 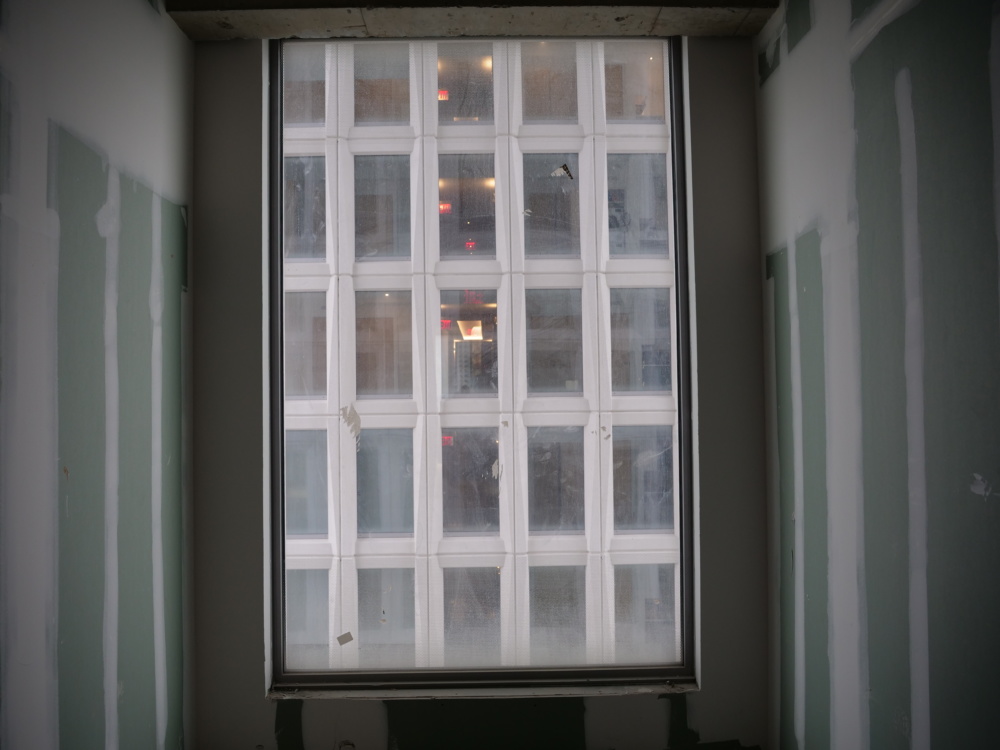 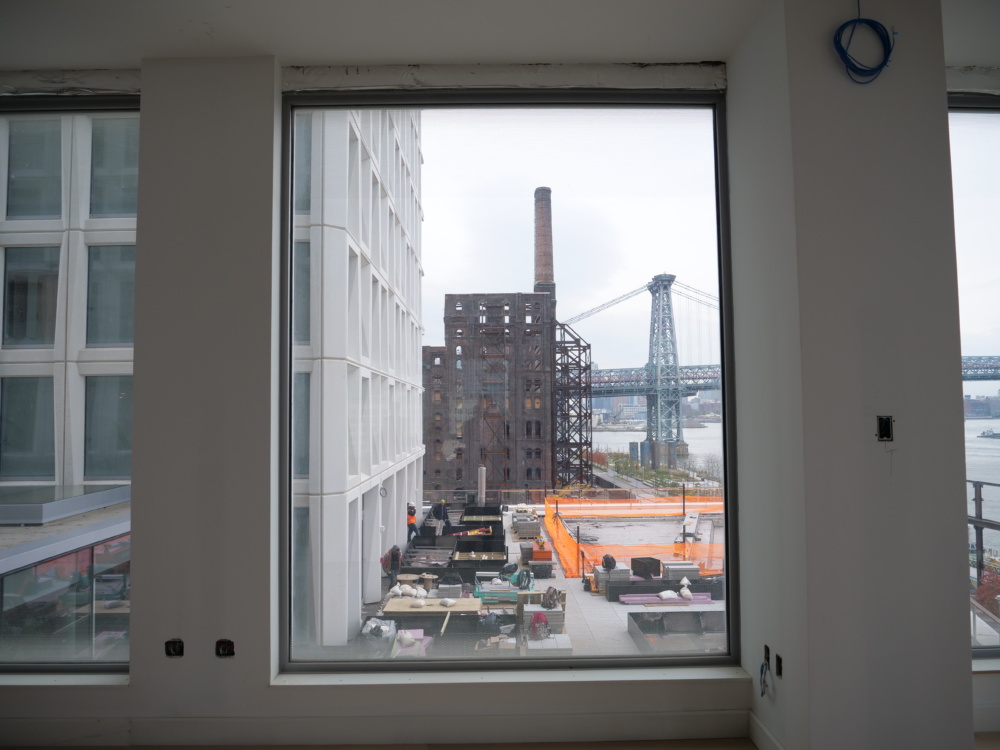 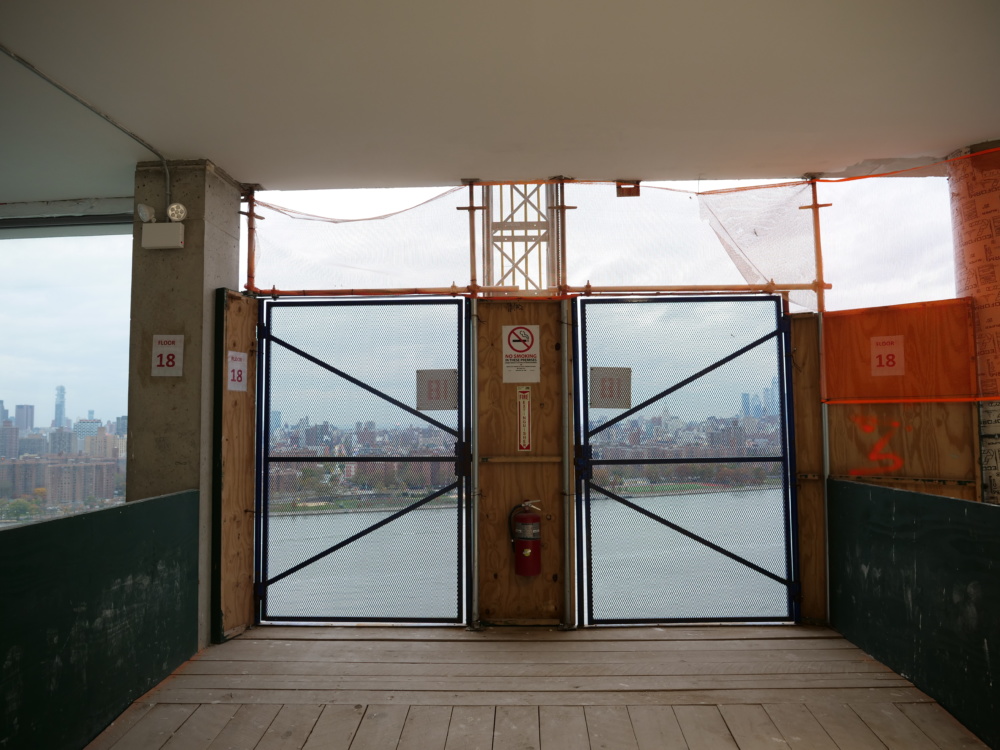 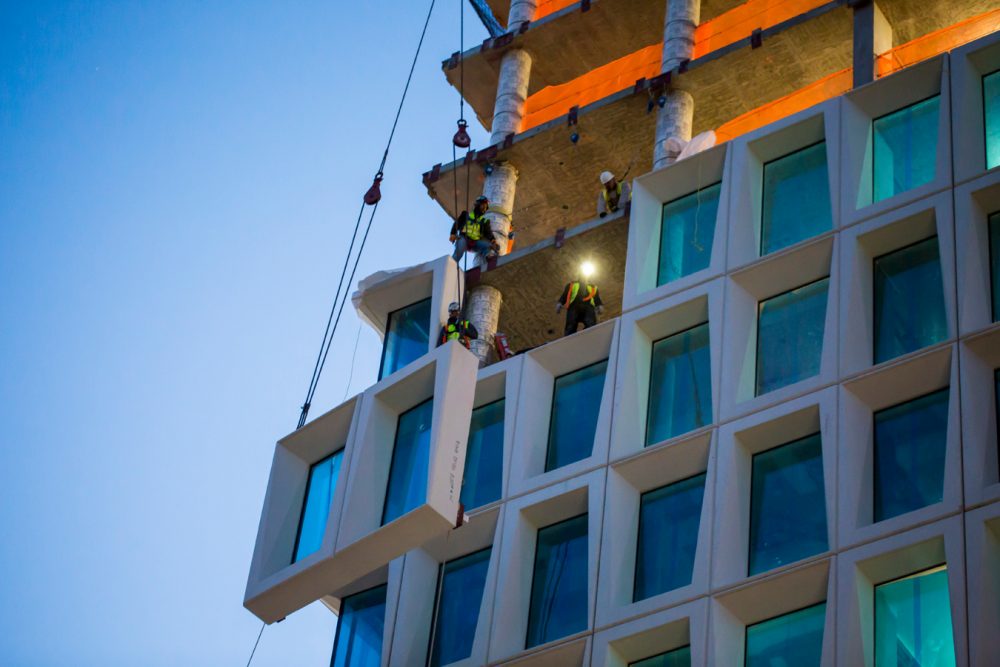 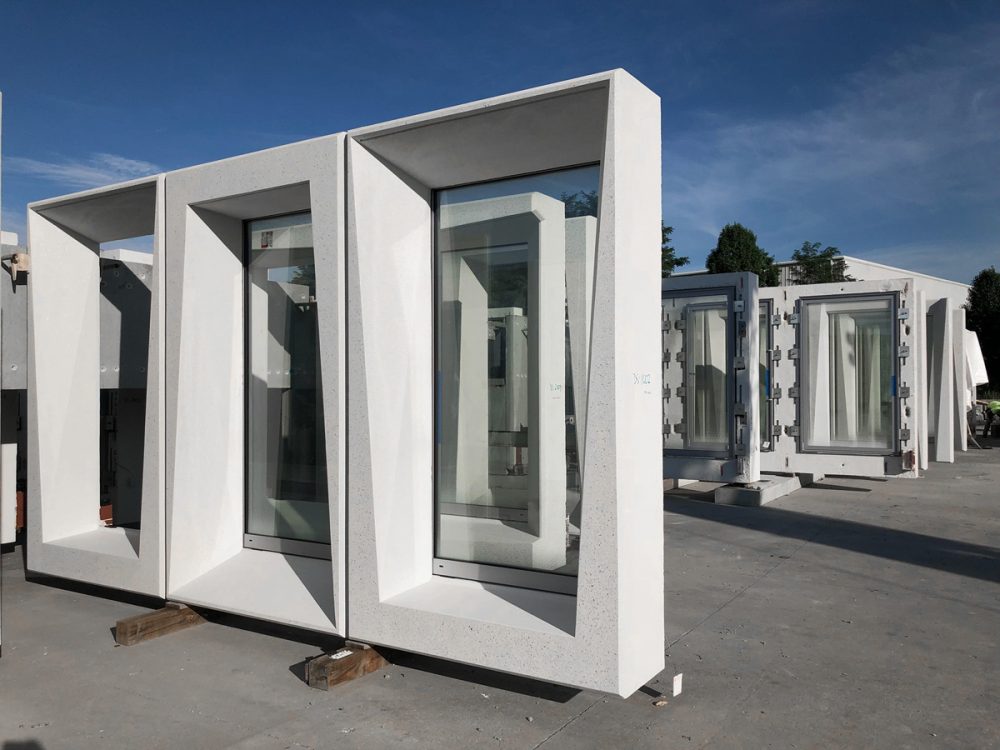 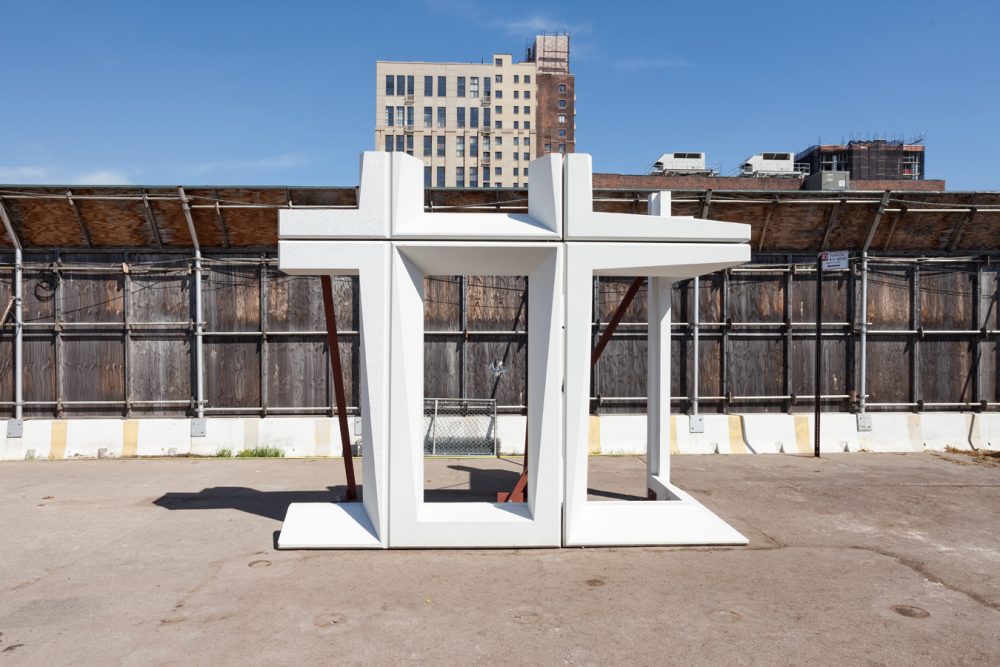 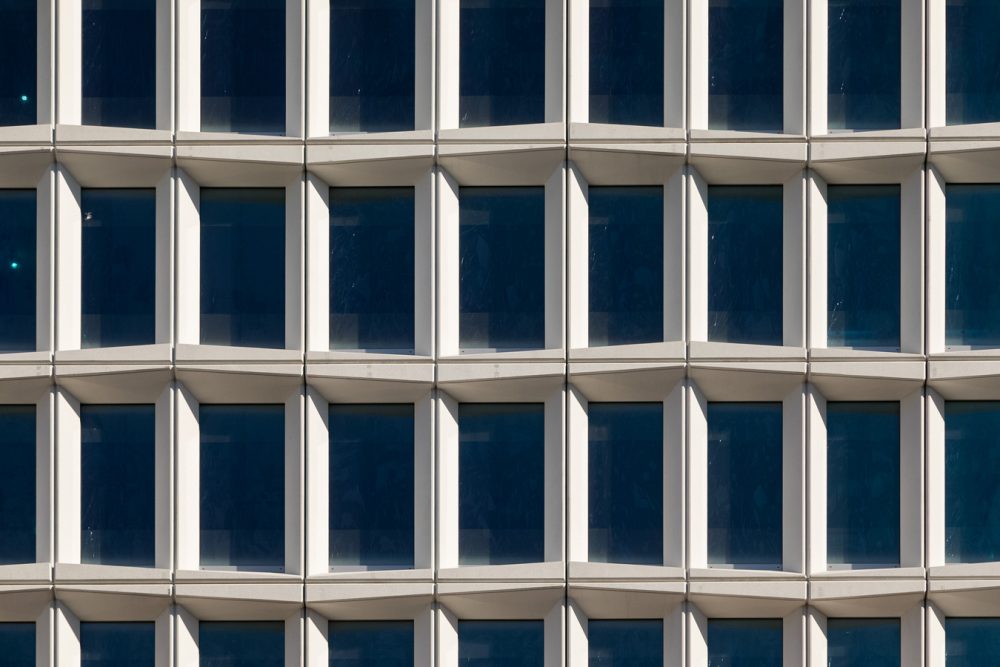 The waterfront surrounding Brooklyn’s former Domino Sugar Refinery continues to rise at a dizzying pace and, similar to DUMBO to the south, this spate of growth is led by Two Trees Development—ongoing projects include PAU’s reinvention of the Domino Sugar Refinery and the recently announced BIG-designed towers. Unlike other sections of the Williamsburg waterfront which are dominated by swaths glass high-rises, the Domino Sugar site is a largescale demonstration of opacity. Ten Grand and One South First, a project designed by architectural practice COOKFOX, continues the trend with custom-blended aggregate precast concrete panels.

Programatically, the development is split between two distinct masses—respectively housing residential and office functions—and rests atop a three-story podium acting as a full-block streetwall. Ten Grand, the residential tower, rises to a height 42-stories and careens over the 22-story Ten Grand; both are connected by a glass-clad sky bridge located at the summit of Ten Grand.

For the facade, COOKFOX opted for precast concrete panels for both stylistic and performative decisions. “We fine-tuned the shape for each solar exposure to create a self-shading performative facade that decreases solar heat gain during the summer months,” said COOKFOX senior associate Arno Adkins. “We were also very inspired by the history of the sugar refinery and the physical characteristics of sugar; shape, color, shadow, and reflectivity. We designed the precast around these characteristics to create a site-specific design that connects to the history of the place.” The result is a collection of deep-set modules with chamfered mullions and spandrels that slightly variate according to elevation and function as an intended shading device.

The architectural studio collaborated closely with manufacturer Gate Precast to develop the dimensions and molds for the concrete panels. Both teams shared an individual BIM model in Revit, facilitating constant dialogue and the advanced customization of the panels. “Without the ability to make realtime modifications in the architect’s office and then share those changes with the fabrication team instantly, the process of design and detailing would have taken several more months to complete thus delaying production and delivery on-site,” said Gate Precast. “Coordination with the architecture team on this project was the only way any of this was possible.”

The bulk of residential precast modules are 9′-9″ tall by 5′-9″, while those found at the podium and commercial tower are, for the most part, 12′-5″ by 10′-0″. Manufacturing of the panels occurred at Gate Precast’s facilities in Kentucky and North Carolina, where the use of 3D-printed models allowed nearly 200 castings per piece—typically a standard mold can only be used up to three or four times.

After an acid wash and polish, the panels were outfitted with their window systems and glazing. Then came the journey hundreds of miles north to Williamsburg, where the panels were craned into position and fastened to the floor slab with a series of steel anchors connected to six steel embeds cast into the concrete panels.