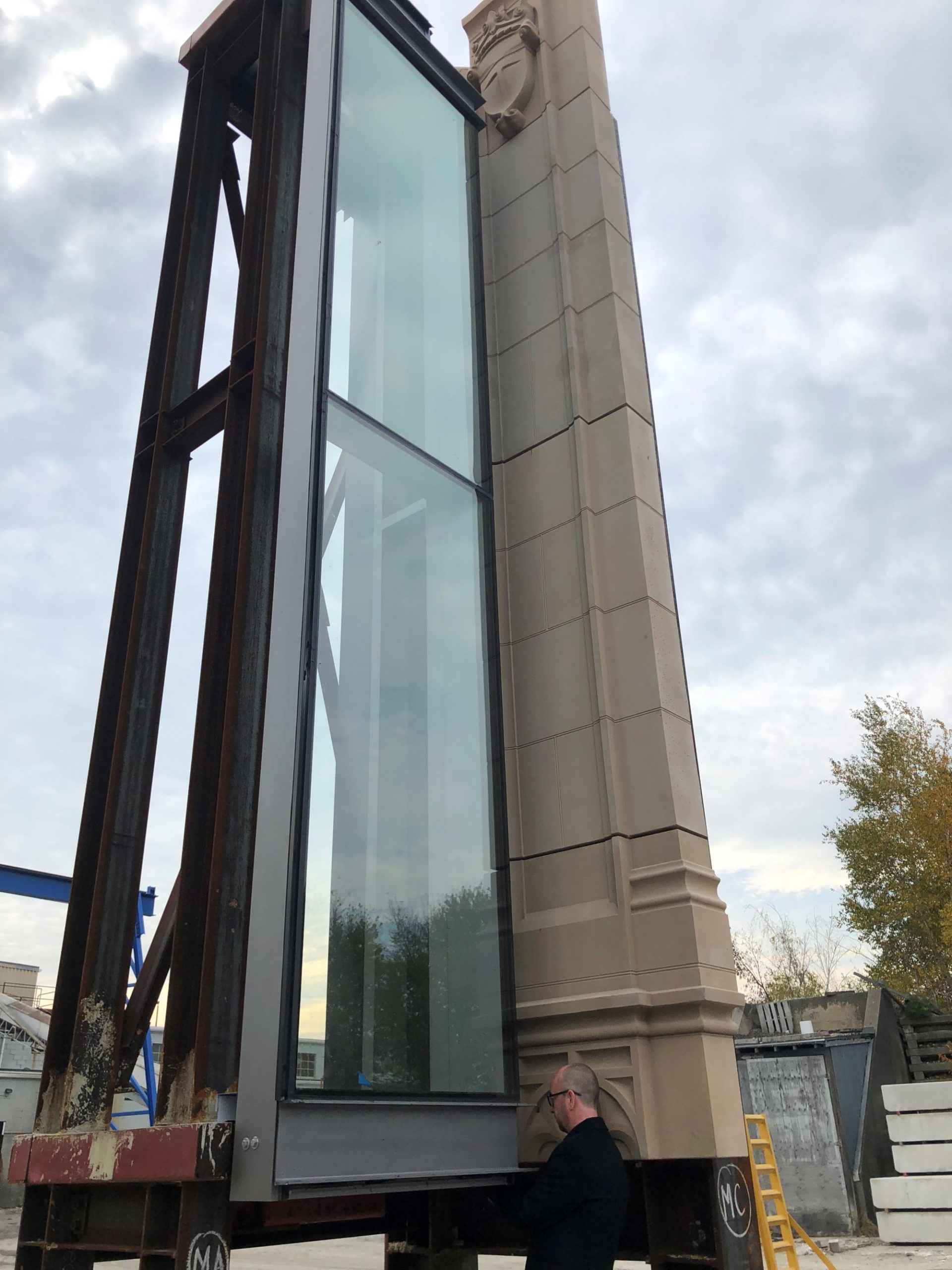 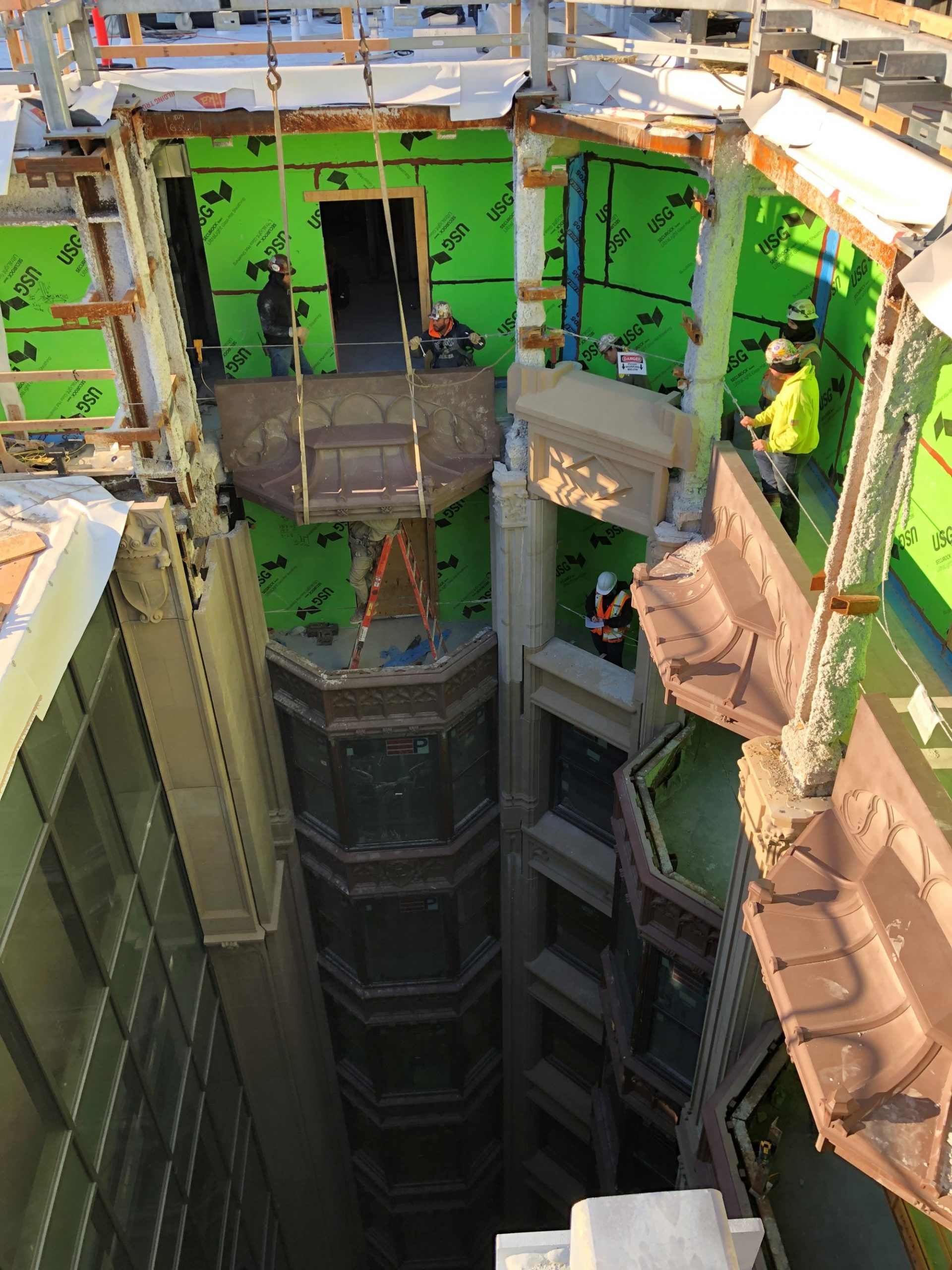 <
►
>
The building’s light wells were transformed into usable space through the insertion of glass volumes. (Elkus Manfredi Architects)

As one of the oldest cities within the United States, Boston is, unsurprisingly, home to a vast collection of historic neighborhoods and buildings. The Boston Commons, whose founding dates back to the early 17th century, serves as something of a nexus point for the city’s historic core. The Little Building, located on the southern corner of The Commons is one such heritage building, and after decades of wear and tear has undergone a comprehensive overhaul by Elkus Manfredi Architects, including a sweeping facade restoration and the insertion of three glazed elevations between street-facing light wells.

The Little Building was constructed in 1917 by developer John Mason Little and architect Clarence Blackall and bears a Neo-Gothic design split between four 11-story towers rising from a street-level podium. Emerson College purchased the tower in 1994 as part of a larger scheme to shift its campus into Boston’s Theater District and led a renovation at that time to convert the structure into a residence hall with a number of other college facilities. But, like any century-old building, the Little Building faced a number of defections that required a deft hand and patient analysis to remedy.

Elkus Manfredi signed onto the project back in 2008 and began their analysis of the facade by commissioning a laser scan survey of the entire building’s surface. The scanning contractors used technology originally developed for aerospace applications that “is accurate to 1/32 of an inch,” said Elkus Manfredi vice president Ross Cameron. Even more accurate scanners were later used to capture the exact details of the ornamental features of the building, which include representations of animals, flowers, leaves, shields, and other decorative flourishes. The scanning process and data gathering took approximately 2 months.

The scans were subsequently used to digitally reconstruct the building; a process that was supplemented with historic photographs and archival research which assisted in discerning the original look of the masonry prior to weathering and spalling. With digital model in hand—a collaboration with Autodesk Technology Center, Boston—Elkus Manfredi was able to seamlessly transfer building details to Quebec-based manufacturer Béton Préfabriqué who went on to replicate deteriorated portions of the facade. Through using ultra-high-performance concrete, which is half as heavy as the original concrete, the design and fabrication teams were able to lessen the stress placed on both the foundation and facade system.

“In addition to the Neo-Gothic style, the most significant historic characteristic of the Little Building is the ‘four-fingered’ plan arrangement, laid out to create three light wells that bring natural sunlight and fresh air deep into the building footprint,” continued Cameron. “Holding the glass interventions down from the 13th floor and allowing the original ‘fingers’ to visibly recede was imperative in preserving this original historic characteristic visually. It was important for these glass interventions to be contemporary in style, allowing the new architectural elements to read legibly as set apart from the existing features.”