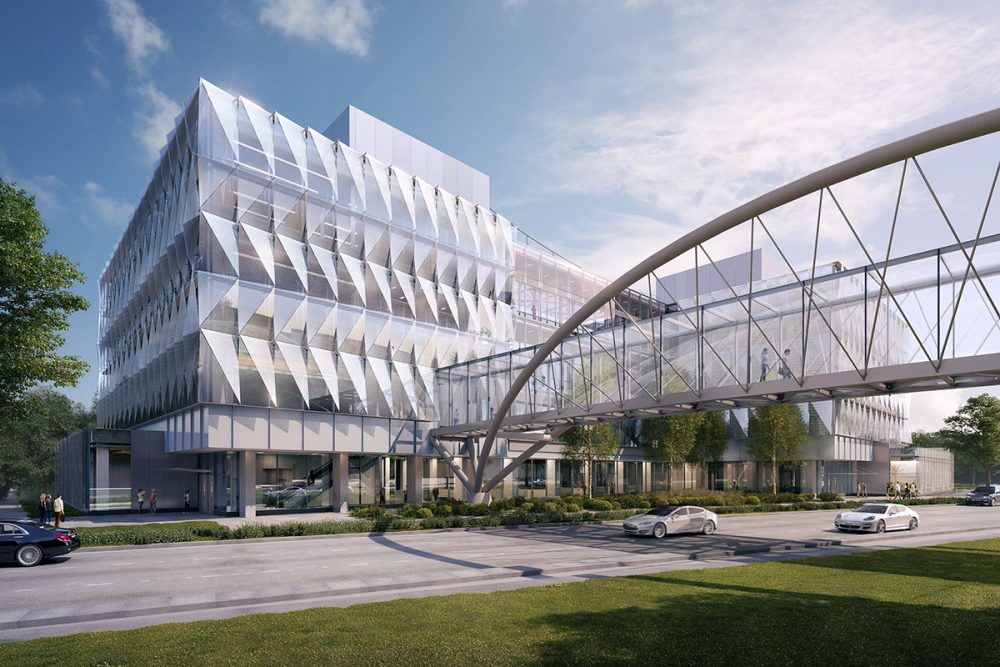 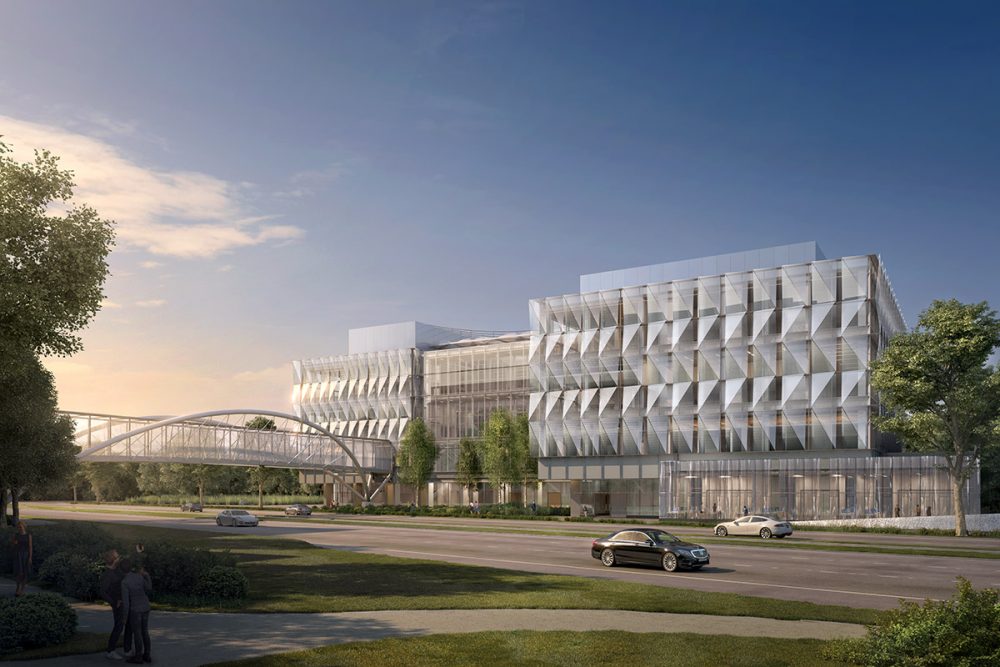 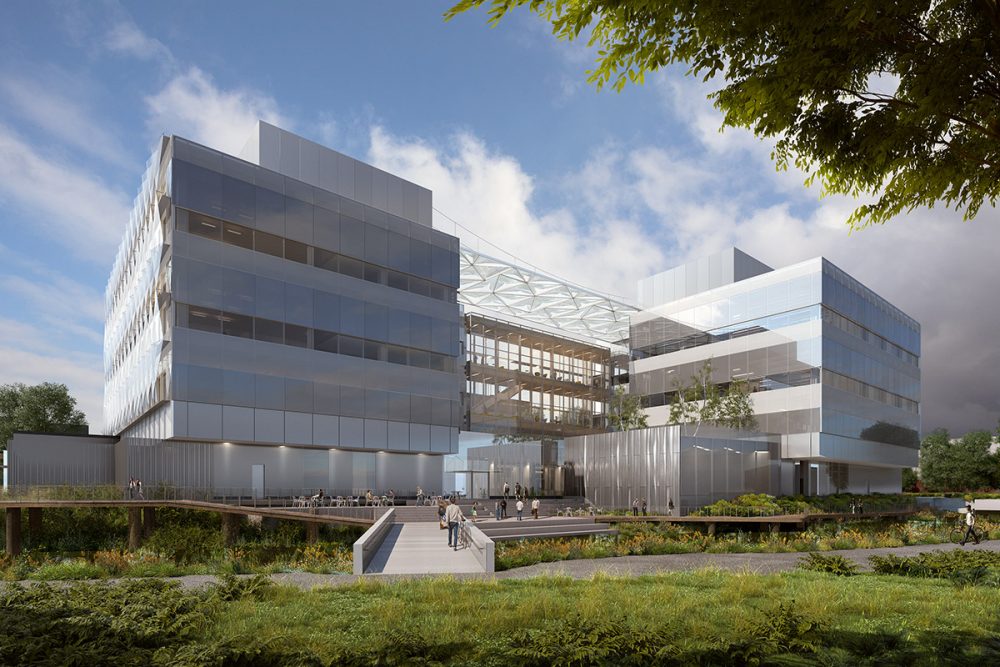 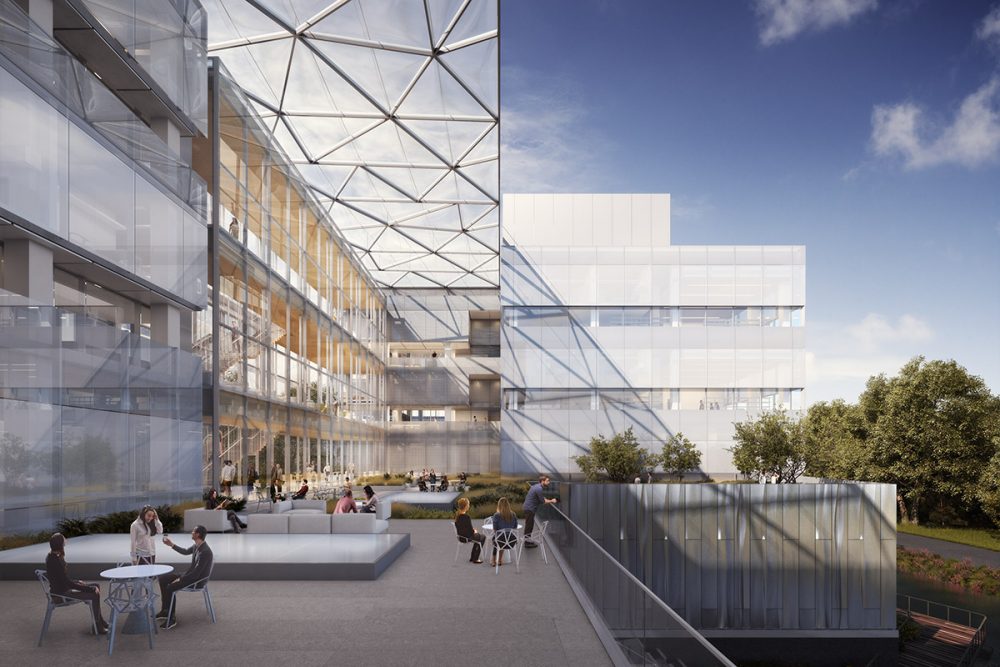 <
►
>
The first phase of the Knight Campus expansion began in 2018 and is expected to finish in 2020. (Courtesy Ennead Architects)

The University of Oregon’s Phil and Penny Knight Campus for Accelerating Scientific Impact is one of the most significant expansions to the Eugene campus following the construction of OFFICE 52’s Tykeson Hall and Hacker Architect’s Berwick Hall. The project is a collaboration between design architect Ennead Architects and architect-of-record Bora Architects, with Thornton Tomasetti acting as facade consultant, and will enclose state-of-the-art research facilities with a double-skin of fritted glass and an Ethylene Tetrafluoroethylene (ETFE) membrane.

The campus expansion began in March 2018 with the groundbreaking of the 160,000-square-foot first phase structure (which came with a $225-million price tag); the total budget for the campaign is approximately $1 billion. This initial phase consists of two, four-story L-shaped towers centered around a shared courtyard, which is connected to the rest of the campus to the south by a pedestrian bridge spanning over Franklin Boulevard.

Unitized glass curtain walls are the primary facade element for the complex, a feature allowing for significant outward views but proving less than ideal conditions of research work within. To mitigate issues with solar gain and thermal performance, the design team introduced a double-skin consisting of folded and fritted glass, which they cite as being inspired by water cascading over rock formations.

“The cascading glass facade provides shading for the building’s double-height research spaces, which were designed to facilitate interdisciplinary exchange,” said Ennead Architects associate principal Jarrett Pelletier. “This fritted glass screen is intended to help improve the energy performance of the facade and thermal comfort of the interior spaces by reducing solar heat gain as well as reducing glare.”

There are two typical sizes for the triangular single-pane glass panels: 7′ x 13’6″ and 7′ x 10’6″ which respectively weigh just over 800 and 600 pounds each. The glass screen is hung off of steel outriggers which are dead loaded from the roof slab with tension rods—they are in turn laterally braced to the unitized curtain wall by stainless steel wind struts tied to anchor brackets embedded within vertical interlock of the mullions.

Construction of the project has proceeded at a rapid pace since 2018 and required a detailed program of installation sequencing for the facade. The system of outriggers ensures that each panel of the cascading glass screen can be easily set following the full installation of the unitized rain screen. Additionally, according to Thornton Tomasetti senior project director Morgan Reynolds, “this system also presented a major challenge in developing the load path to properly distribute and transfer the forces from the laminated glass rain screen through the curtain wall system and back to the base building structure during a seismic event.”