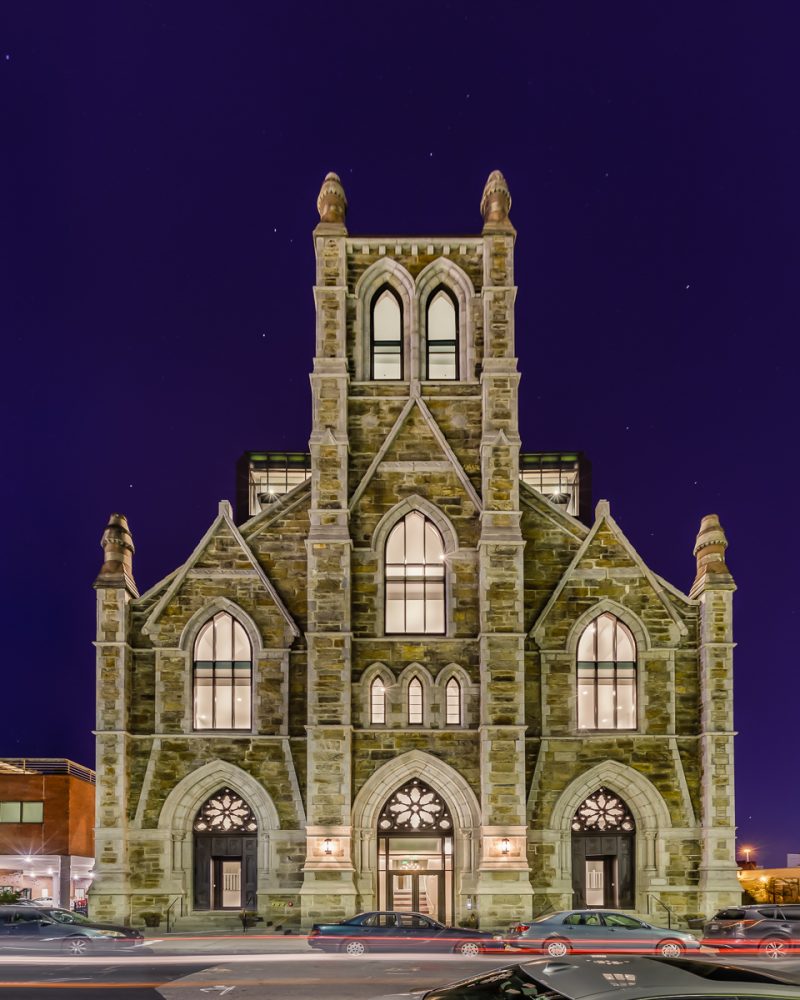 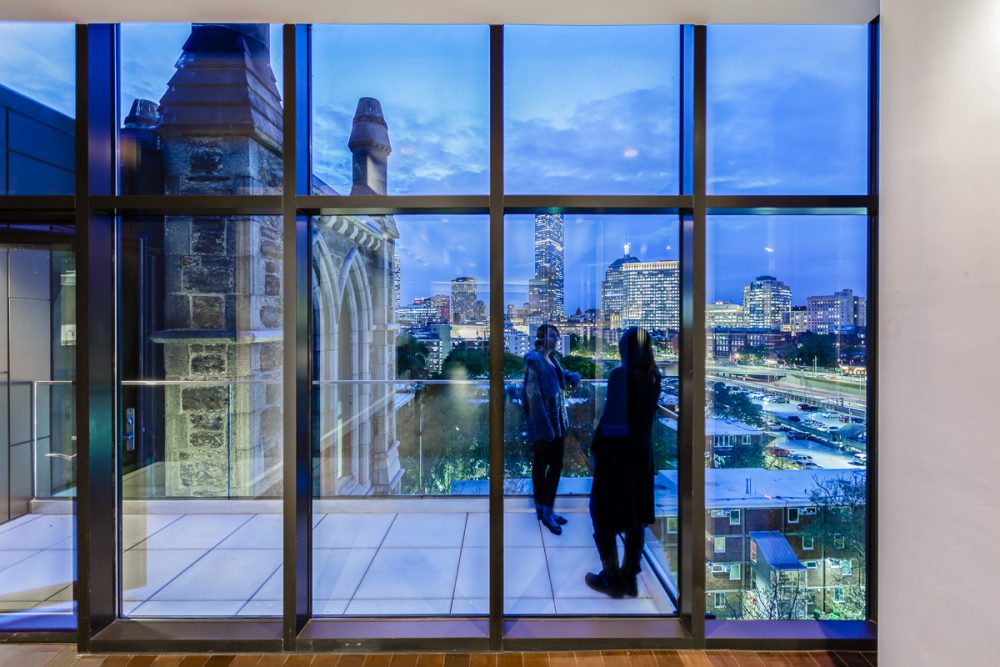 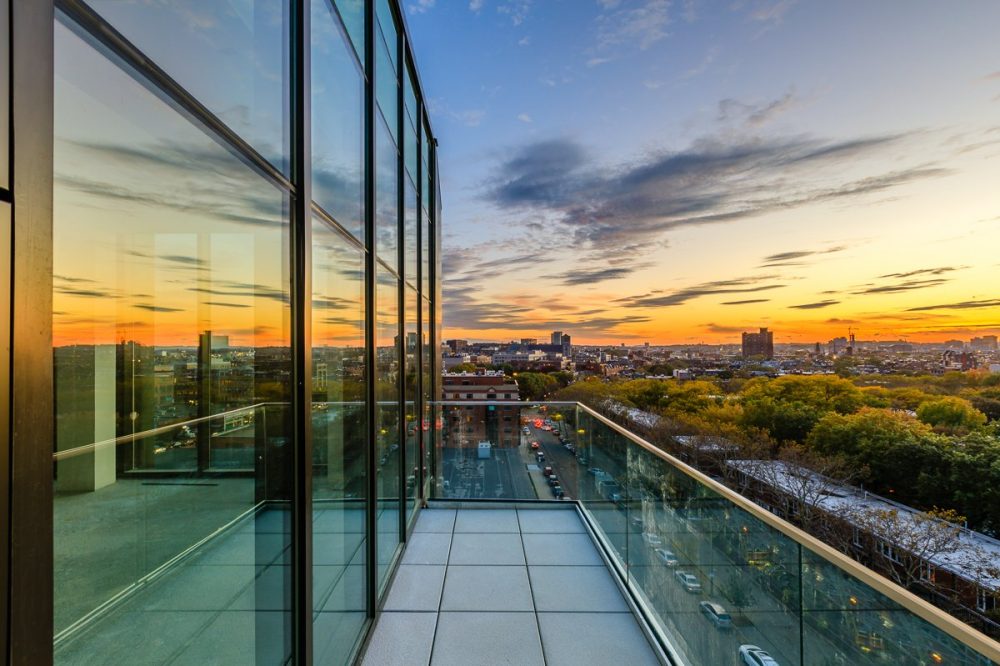 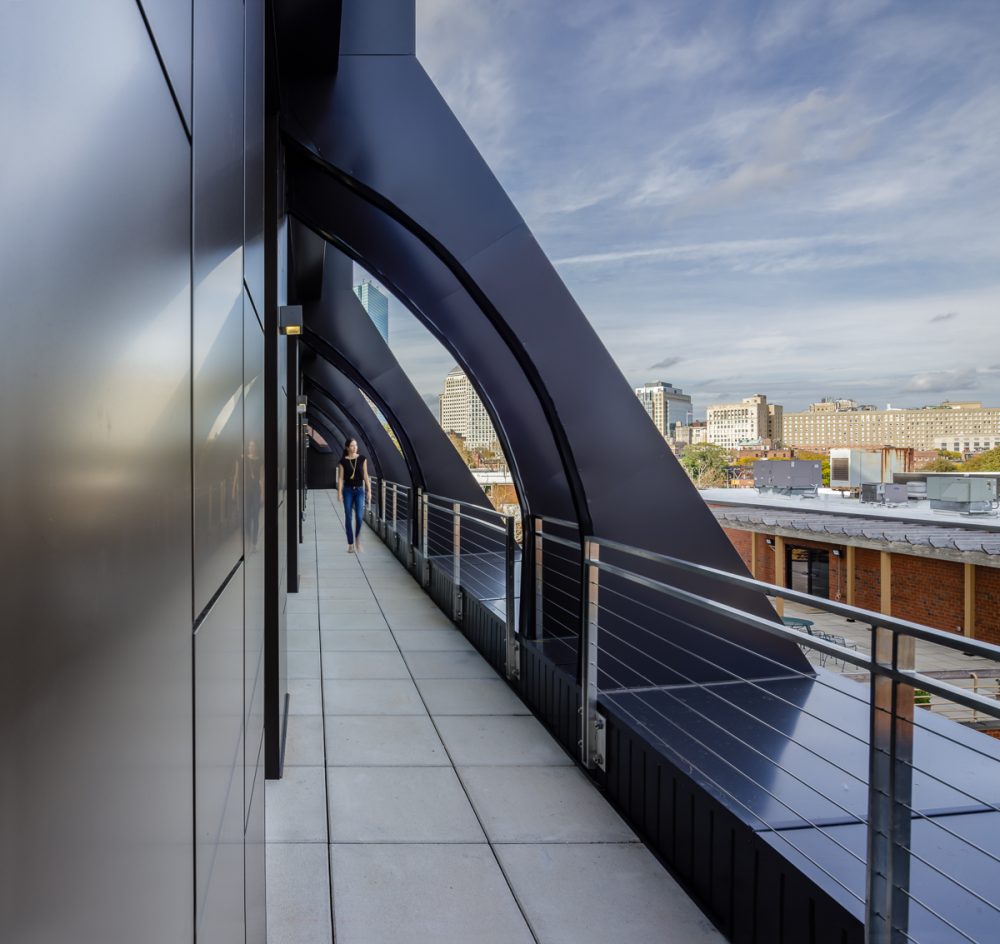 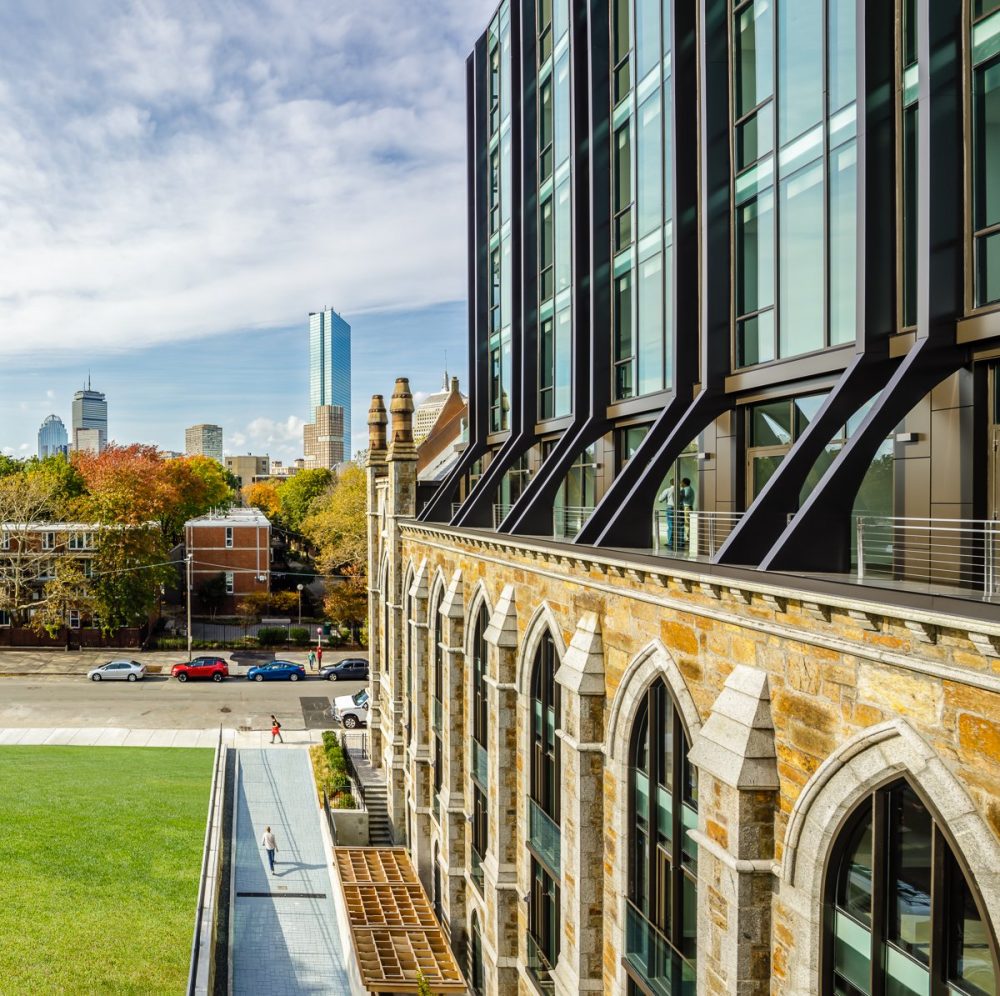 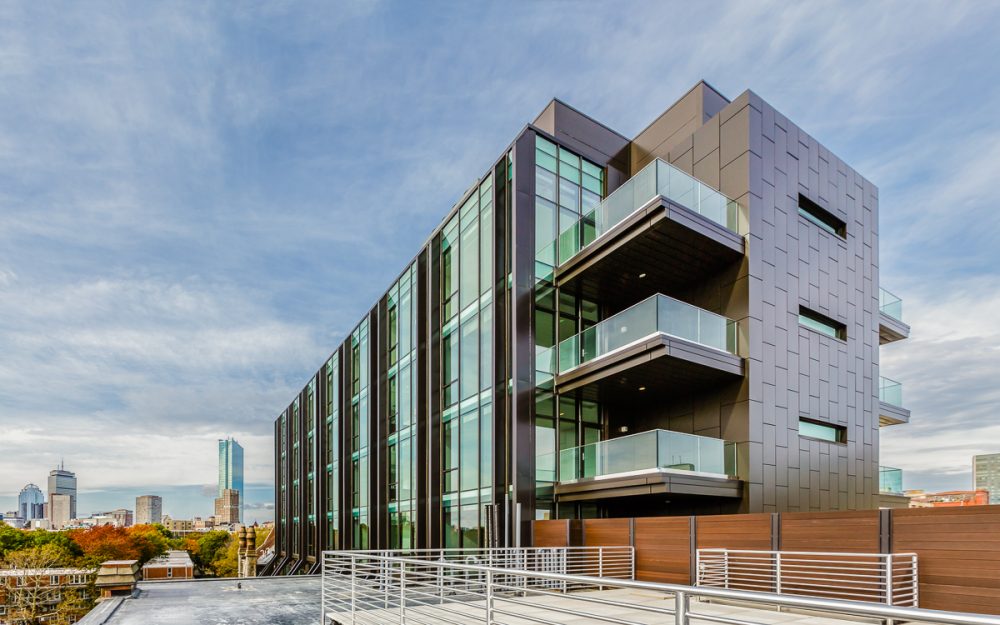 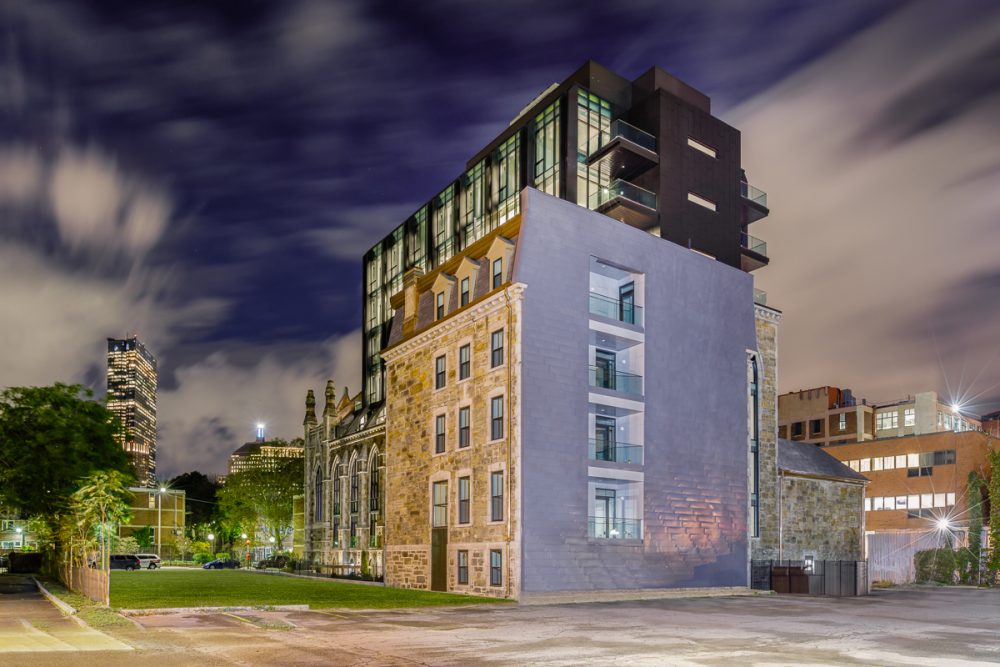 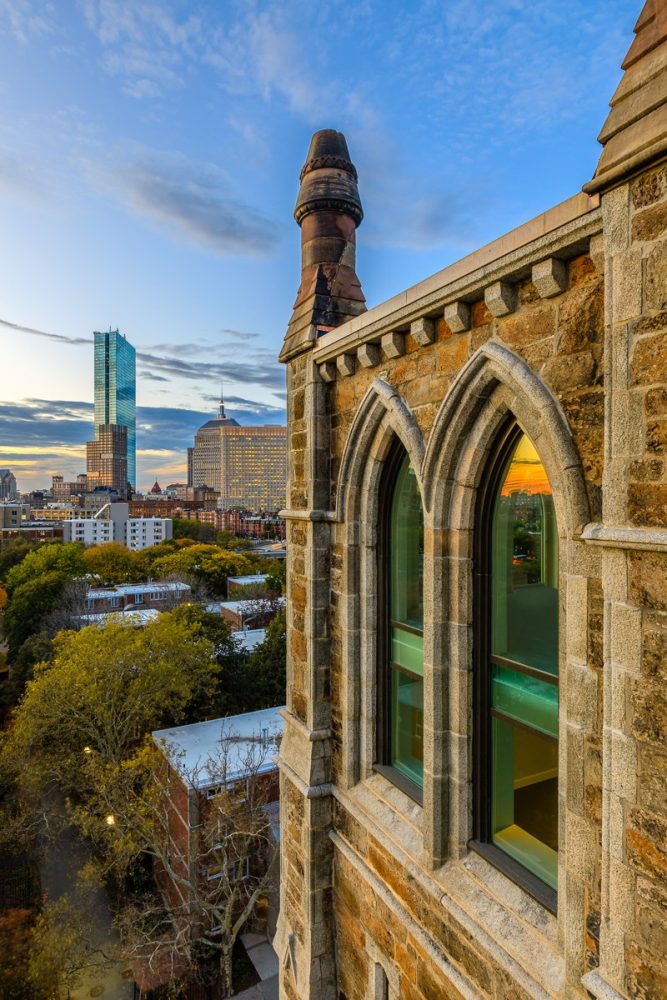 Located within the former Holy Trinity German Church, an 1877 structure designed by Patrick Keely in Boston’s South End, Finegold Alexander Architects inserted an eight-story, extruded glass-and-steel condominium residence. The Lucas preserved solely the original stone walls, tower, and arched windows of the facade and “slid” in the new residences to maintain its iconic nature within the neighborhood. Ellen Anselone, a Principal at Finegold Alexander Architects, said in a press release “the design team sought to harmoniously marry the old and the new.”

Because “the existing walls couldn’t take the weight of a new building,” Anselone told AN, “the idea was to slip this new structure inside that existing one.” Finegold Alexander Architects had the facade 3D-scanned on the interior and exterior to assist with putting the drawings together. Working with the contractors, the project team evaluated the integrity of the exterior walls and the condition of the stonework. The original stonework was primarily intact and required minimal restoration.

As seen in the pre-construction photos, the original stone walls were thick enough to stand alone during construction. Finegold Alexander’s design did require some cutting down of the original window sills on the first floor to create space for new windows. It also relocated the existing stair on the street to allow for accessible entry to the building.

Many iterations of intervention were considered before arriving at the final design, which is mostly an extrusion of what is seen in the floor plan. The stone buttresses are continued up into the new steel structure. In the detailing of the new construction, there is a perimeter of steel framework, constructed right up to the interior of the existing stone walls, which then the vertical steel was anchored on. The floors were then installed and braced.

Above the roofline of the original church, the new structure is clad in a simple metal panel rainscreen and curtain wall enclosure. The detailing was meant to be an extension of the historic language of the facade and also create a contemporary interpretation, in opposition to mimicry. The system follows the vertical lines established in the original facade, in both the metal panel and curtain wall. There are vertical fins which jut out over an exterior balcony, reminiscent of the original buttresses but clad in the same metal panel as the rainscreen system and tied back to the new steel structure.

Being an adaptive reuse project, immense coordination was required between the architect and the contractors. One of the biggest challenges was efficiently locating the waterproofing where the new construction meets the existing wall. The process was hands-on, and Finegold Alexander Architects were onsite to work out those details with the contractor. Once the windows and curtain wall were installed, everything was diligently water-tested to ensure the tightness of the building envelope.