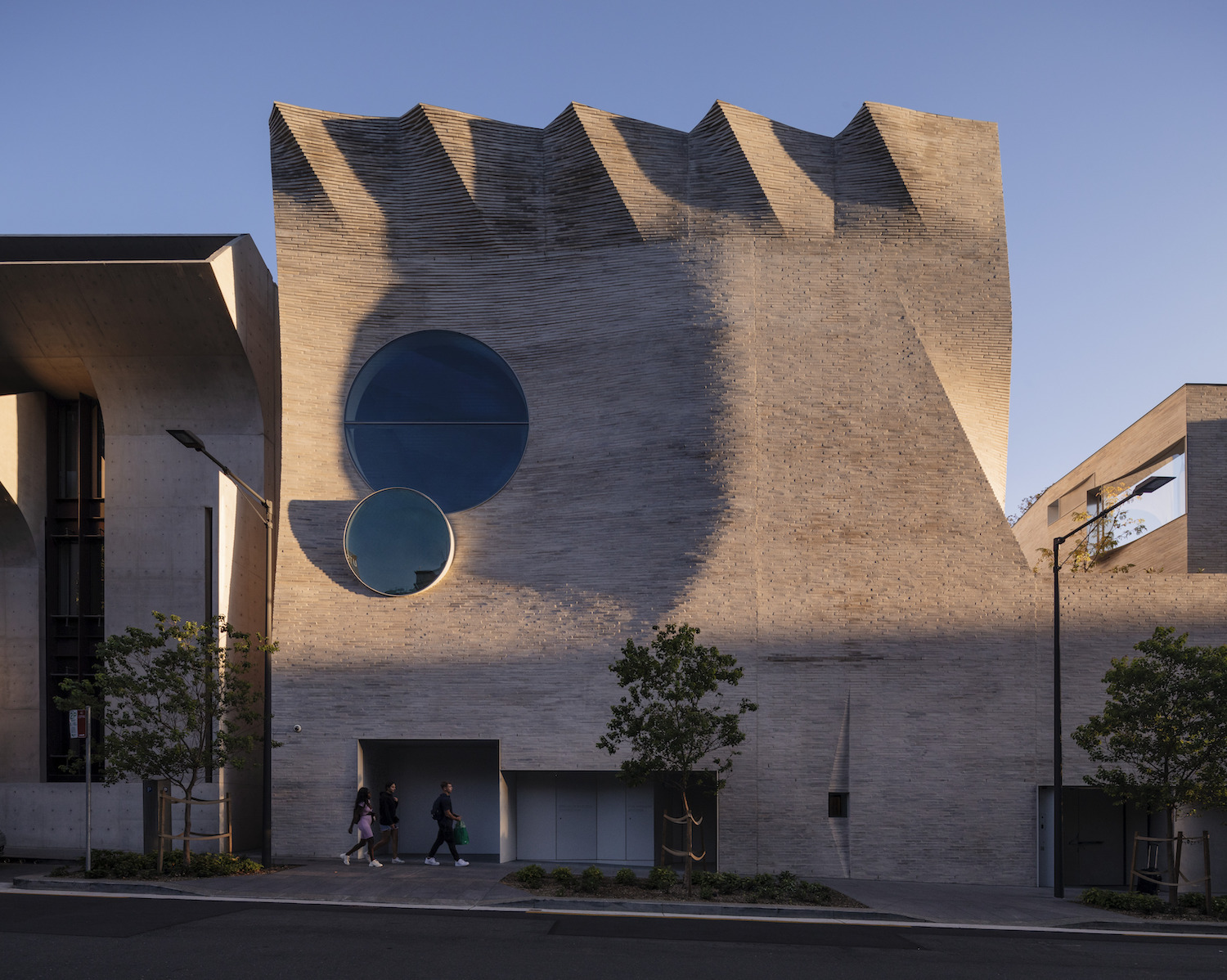 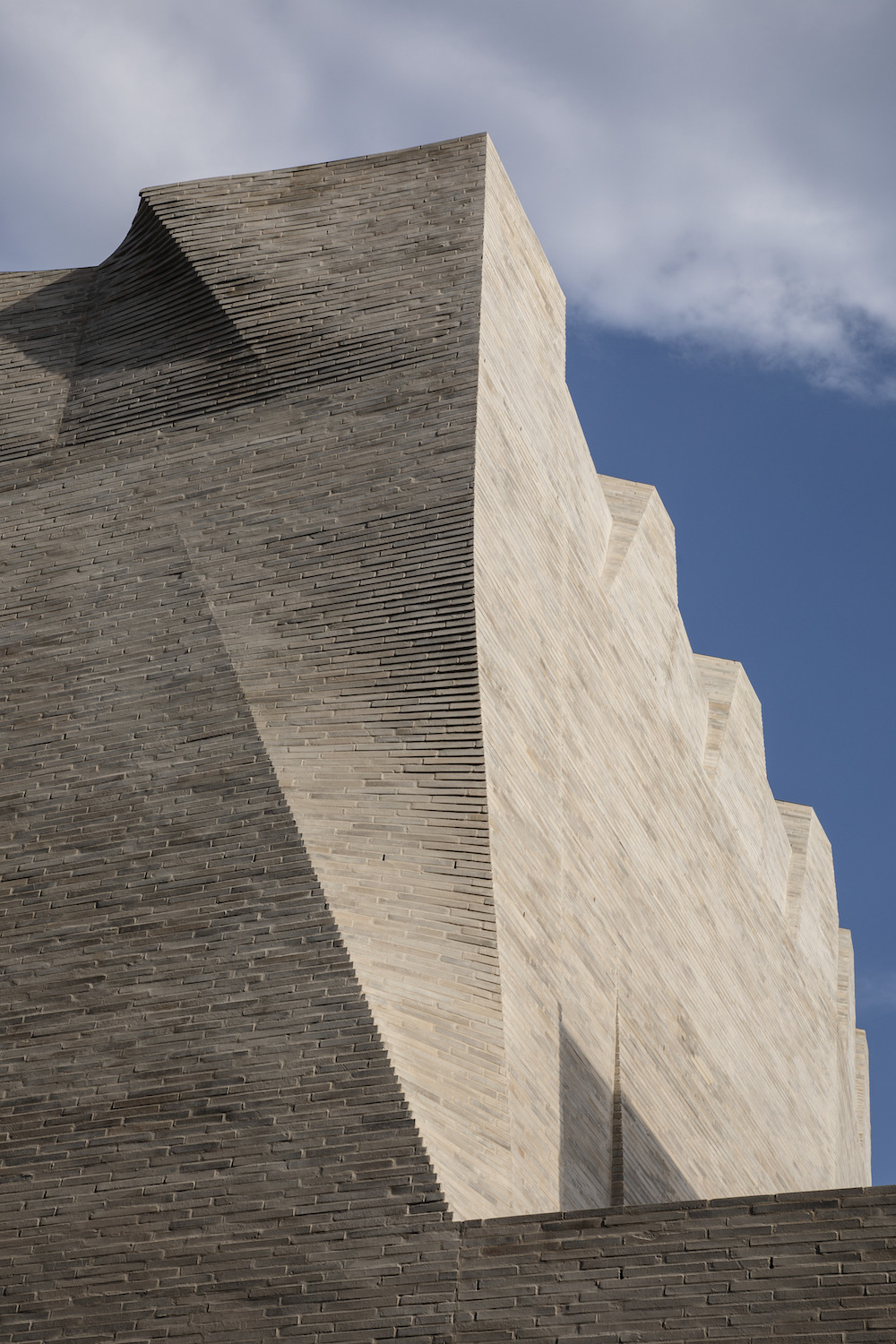 <
►
>
The bulk of the facade is opaque, but there are significant moments of transparency, such as the oculi found at the street wall. (Trevor Mein)

Perched on the Tasman Sea in the South Pacific Ocean, Sydney is the largest city in Australia and the capital of New South Wales. Similar to many cities within the Anglosphere, Sydney’s urban morphology is centered on an ever-rising central business district surrounded by a ring of inner suburbs, which, in this circumstance, is crossed by two dendritic-patterned harbors, Botany Bay and Sydney Harbor. One such inner suburb is the Chippendale neighborhood, which hosts the nearly year-old Phoenix Central Park, an interdisciplinary gallery and performance space.

The approximately 13,000-square-foot project was designed by John Wardle Architects and Durbach Block Jaggers Architects and settles into its midblock infill site with an idiosyncratic design composed of a carved and curved mass of light grey handcrafted brick. 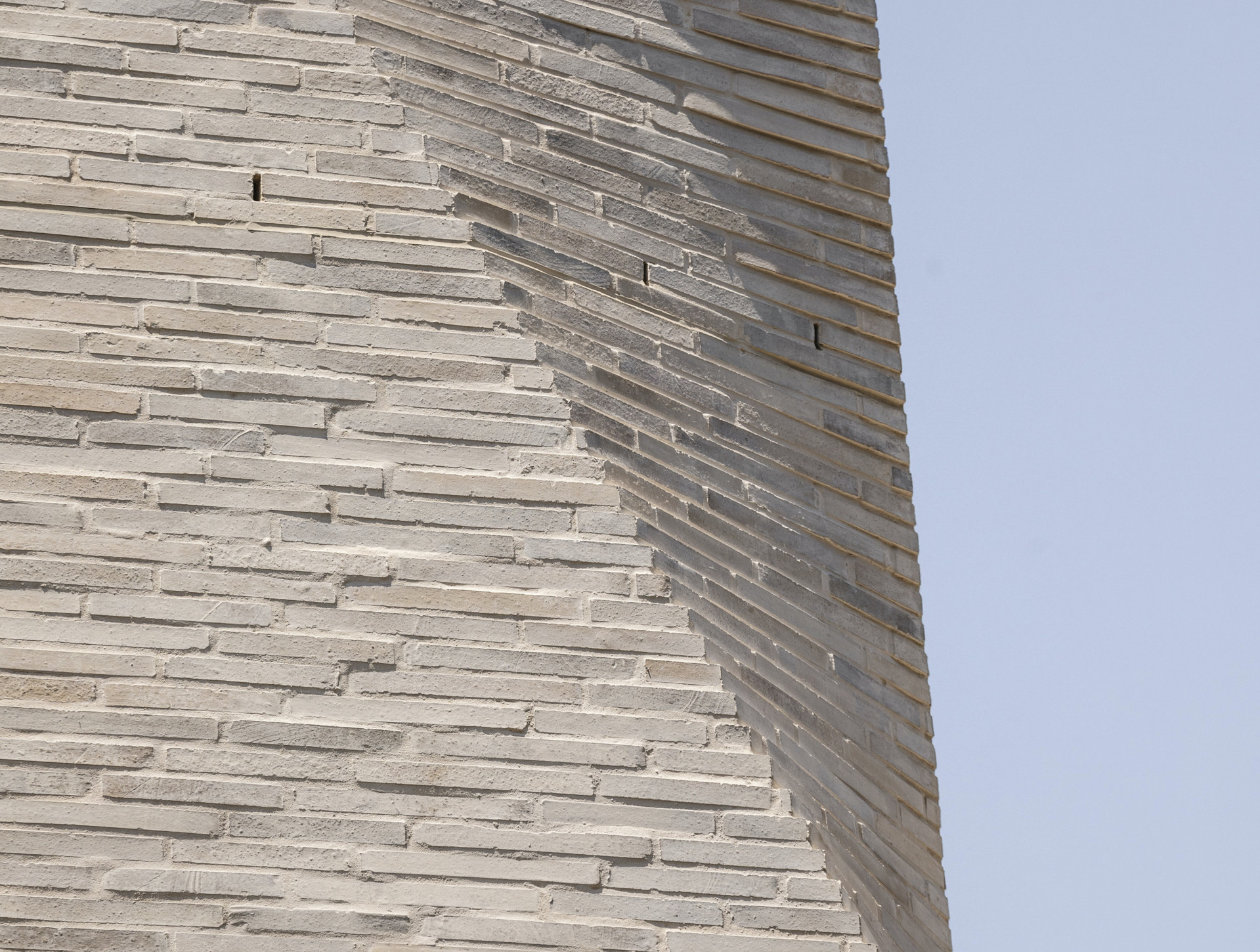 The program of Phoenix Central Park, as a gallery and performance space, necessitated control of natural light and the elements, and brick proved an effective measure to soften an in-situ concrete and steel structure sandwiched on an approximately 7,000-square-foot site.

“The site itself is small and confined so the process of construction was, from the outset a considerable undertaking. We realized as we were developing our ideas for the facade even though it was created from one material, the series of strategies involving the cambering, curving, and tapering of the bricks as well as the incisions for the windows created the requirement for a raft of varying details,” said John Wardle Architects partner John Wardle. “They all differ greatly from window to window.”

Krause Bricks, a third-generation bespoke brick manufacturer based in Victoria, handled the production of the Roman-style bricks. The manufacturer was signed on to the project early and conducted a host of material studies, with samples sourced from a range of quarries and clays and fired at different rates. Following review and discussion, the design team opted for a light-grey brick which came in two sizes: 18″ by 4″ by 2″ and 14″ by 4″ by 2″.

The arrangement of the brick is not your straightforward stretcher bond pattern; it swoops, curves, and corbels before reaching a remarkable cornice of castellated trigonal projections. That complex expression required an advanced level of masonry expertise which was found in contractor Favetti Bricklayers, another multigenerational company located just outside of Sydney.

Although the bulk of the facade is opaque, there are several moments of glazing found at the clerestory, and, notably, the coupled oculi found at the streetwall. “The dimple window is a playful expression of droplets of water forming a pool and a depression within a horizontal plane being set vertically. To create this effect, the two rings of glass are inset within the brick surface: it’s as if the brick has been treated as a lightweight fabric and the impression of the windows pushing inwards creates the circular dimple,” continued Wardle. “The windows also align exactly with the street that terminates directly in front of the building, so in a way, they become urban markers that place the building in its location. This idea caused possibly the most complex documentation detail that has ever been undertaken by our practice.”