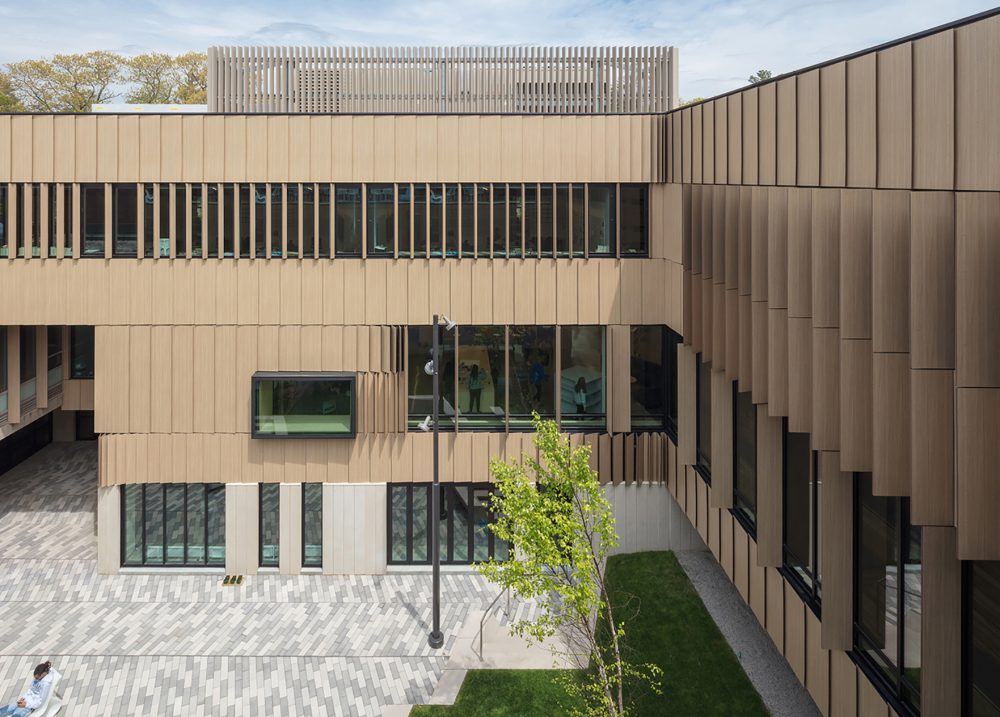 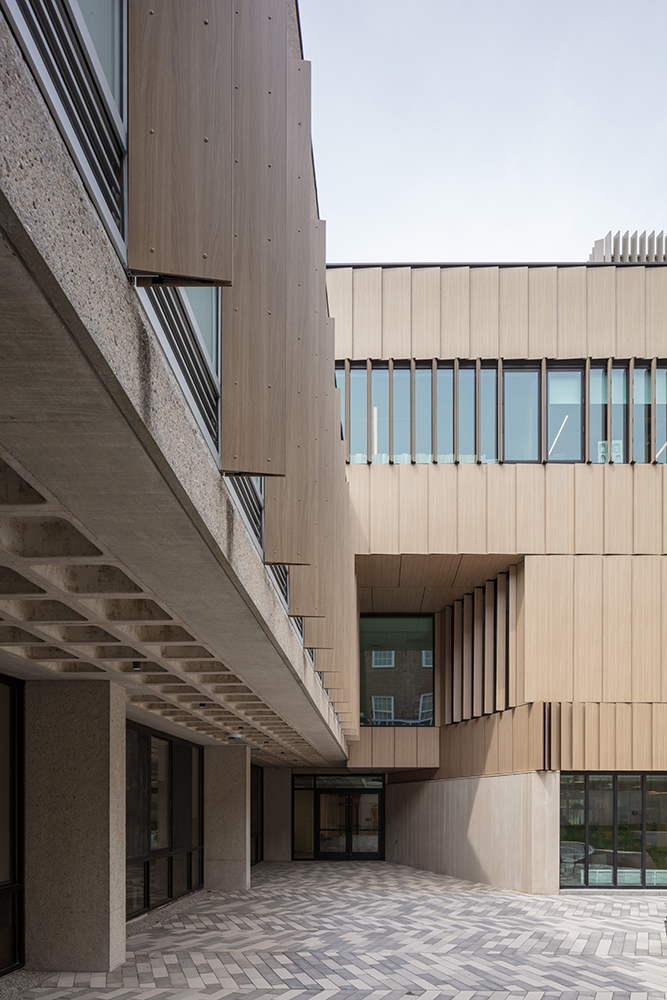 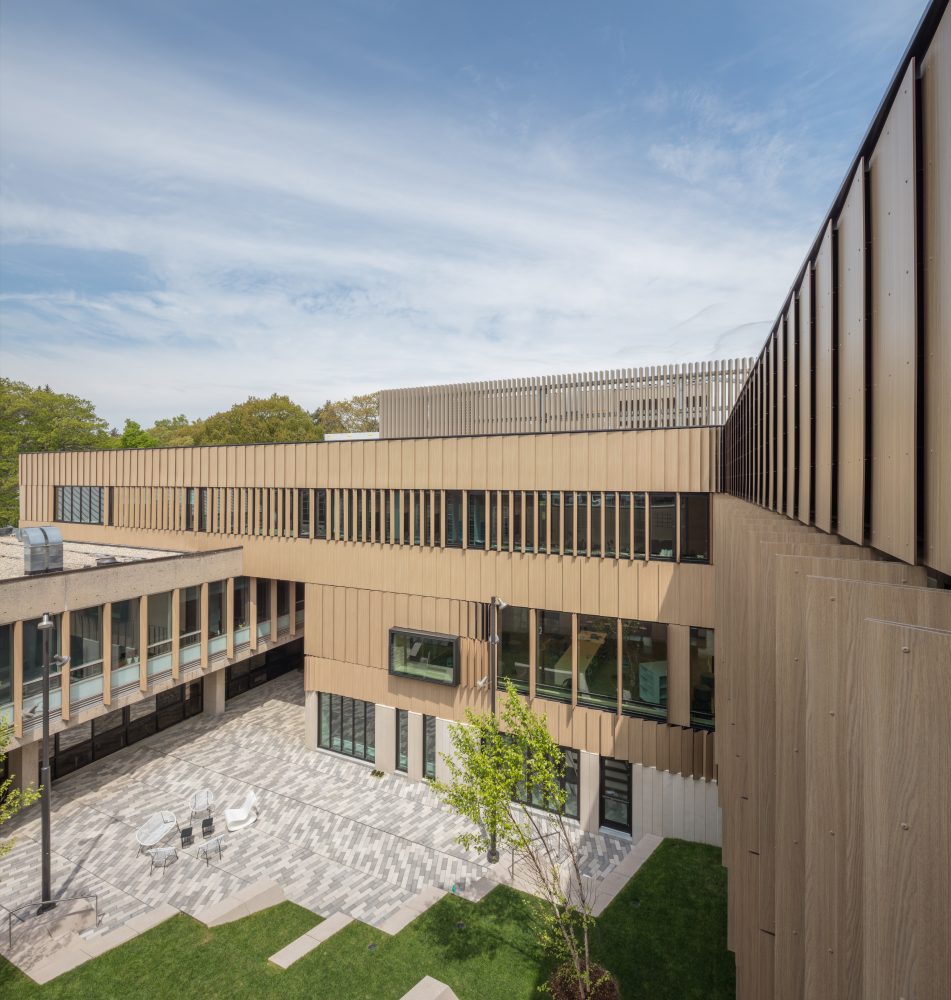 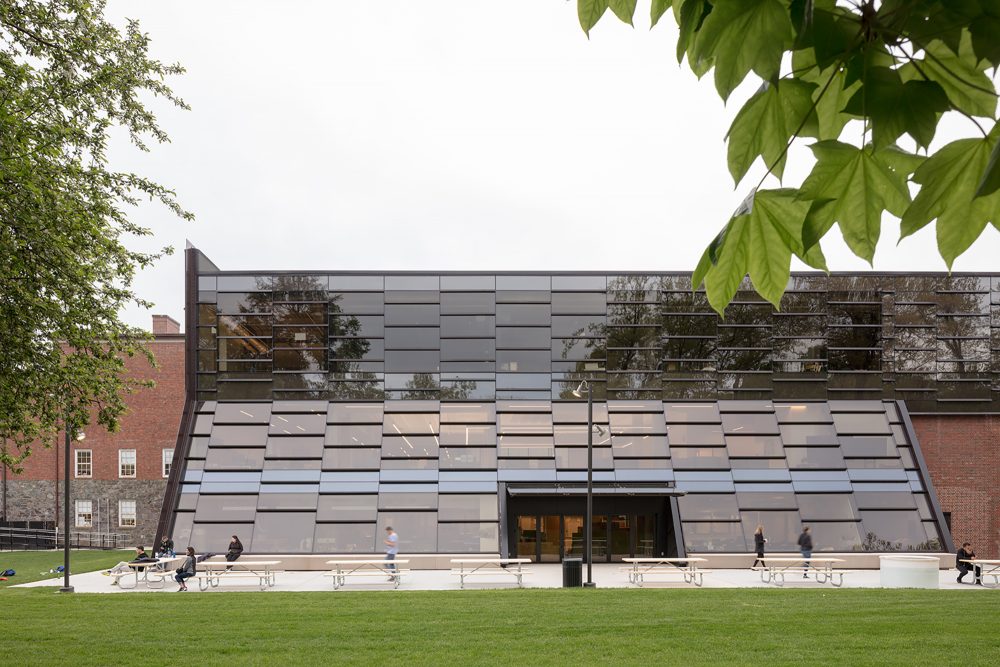 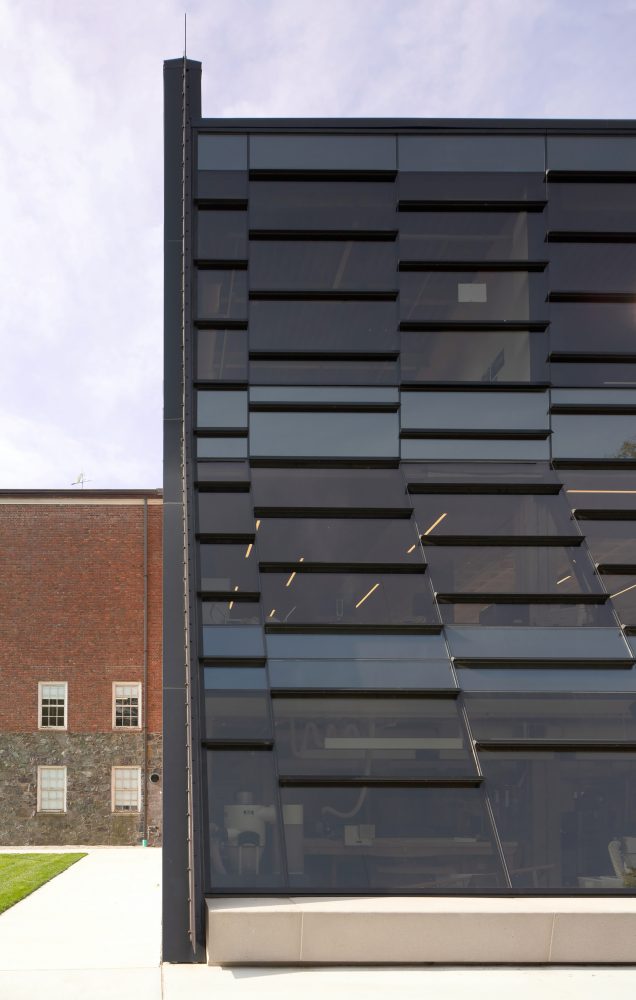 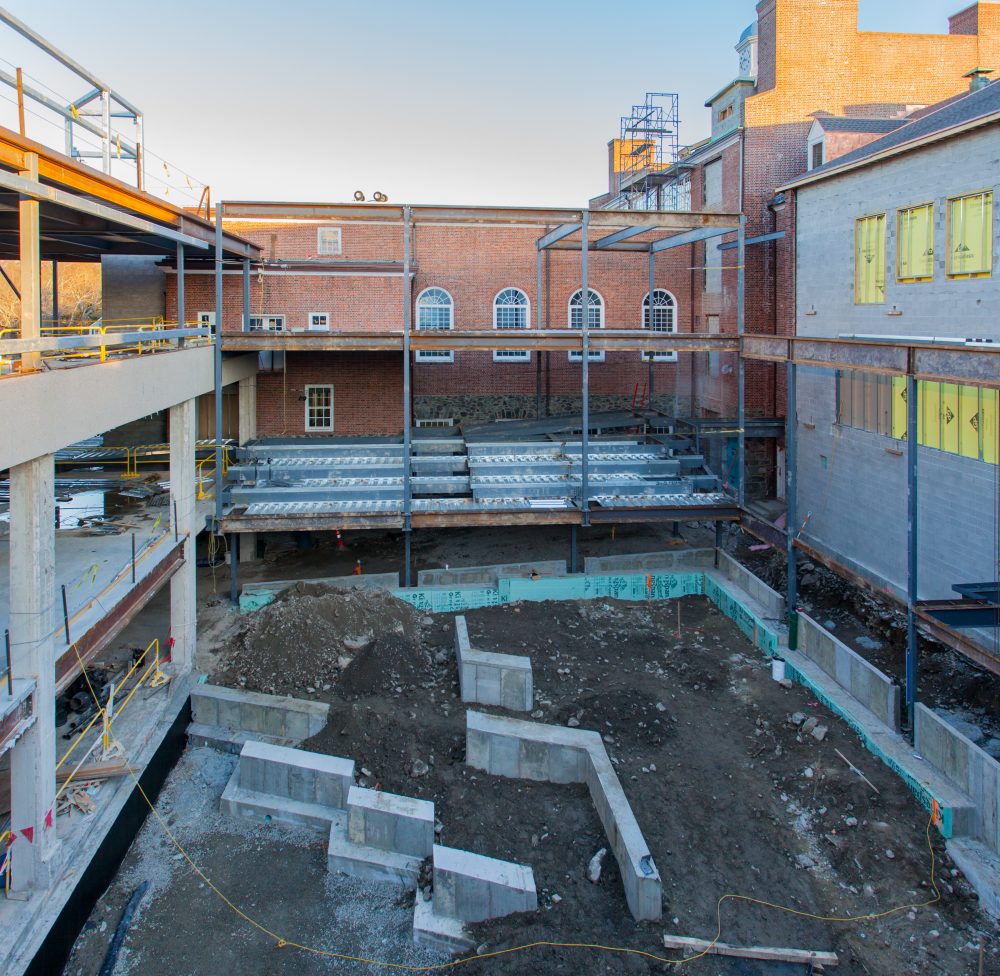 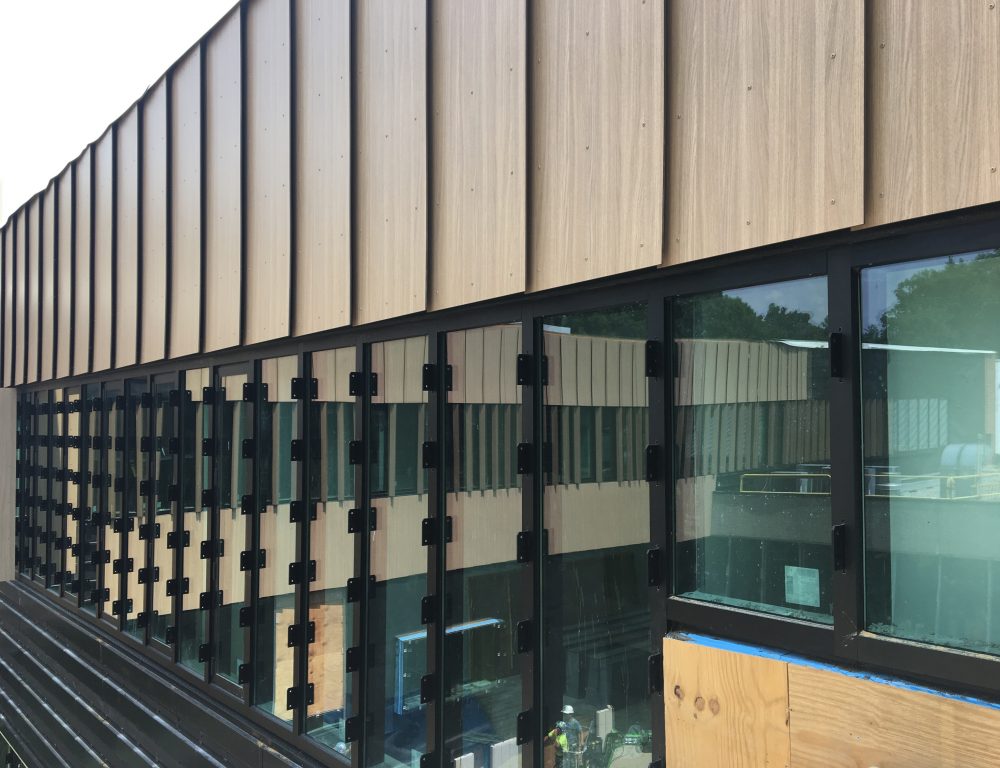 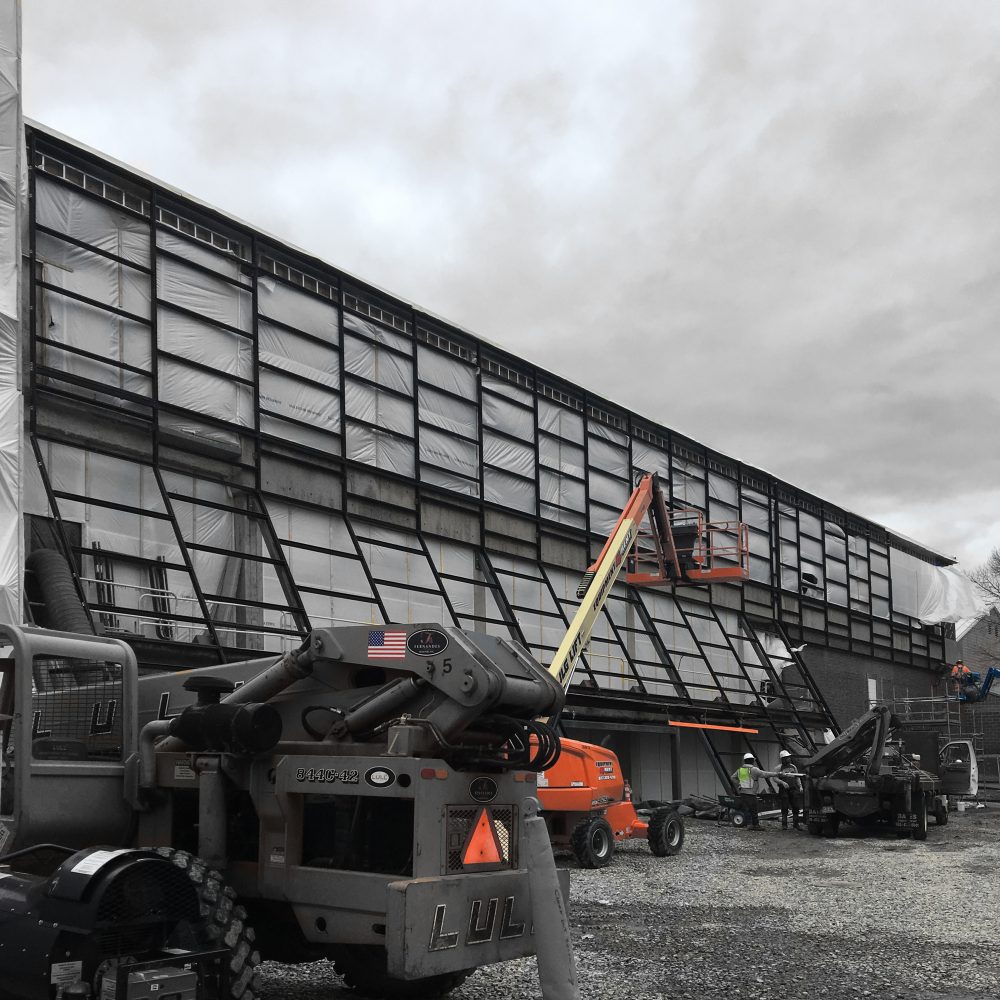 The Beaver Country Day School, founded in 1920, is located in Chestnut Hill, Massachusetts. The school completed three major expansions to its campus over the course of its near-century-long existence, and in 2017, NADAAA and facade consultant Studio NYL completed a project to bridge these accretions into a cohesive whole with a comprehensive revamp of the interior and an enclosure system dominated by vertically-shingled phenolic panels and an expansive glass curtain wall.

The oldest structure on the campus is the masonry-and-brick main academic building. The science wing and library were both constructed in the second half of the twentieth century, with the library being a brutalist, largely concrete presence. To link these structures into a more cohesive space with a greater connection to the principal academic building, the design grafted an additional floor atop the 1967 additions and created a new three-floor hall.

The focal point of the nearly 40,000-square-foot project is the courtyard with a landscape designed with Reed Hilderbrand. From there, the project has a cohesive character defined by wood-veneered phenolic panels that modulate from flat cladding to projecting fins for sun-shading. Each of the panels is attached to light-gauge steel stud walls through a fiberglass stand-off and hidden aluminum brackets.

“We wanted the intervention to reinforce the courtyard’s insularity but allow views from all the surrounding spaces,” said NADAAA principal Arthur Chang. “The phenolic panels treated with a light wood finish line the open-air chamber, contrasting it with the brick and concrete of the existing architecture, creating a uniquely singular identity for this interior public space.”

Within the courtyard, one of the more technologically complex components is the transition from the rainscreen to a projected glass curtainwall. The curtainwall effectively functions as a cantilevered bay window, providing natural light for an internal corridor that serves as a recreational area for students.

According to Studio NYL founding principal and facade director Chris O’Hara, “The challenge of the projected glass curtainwall resulted from maintaining a thin visual structure while maintaining thermal continuity. Steel blades jut out from the structure to cantilever the window, which is in turn sided with metal flashing and insulated by two layers of adjacent Dow blanket to maintain thermal continuity.”

The north elevation of the Research + Design Center significantly breaks from the material palette of the courtyard with an angled glass curtainwall. For the curtainwall, the design team utilized EFCO’s System 5600, which effectively conceals the fasteners holding the glass panels in place. Custom aluminum snap covers are placed horizontally across the curtainwall, a stylistic flourish to evoke the brick bonding of the historical context while also diffusing rainwater.