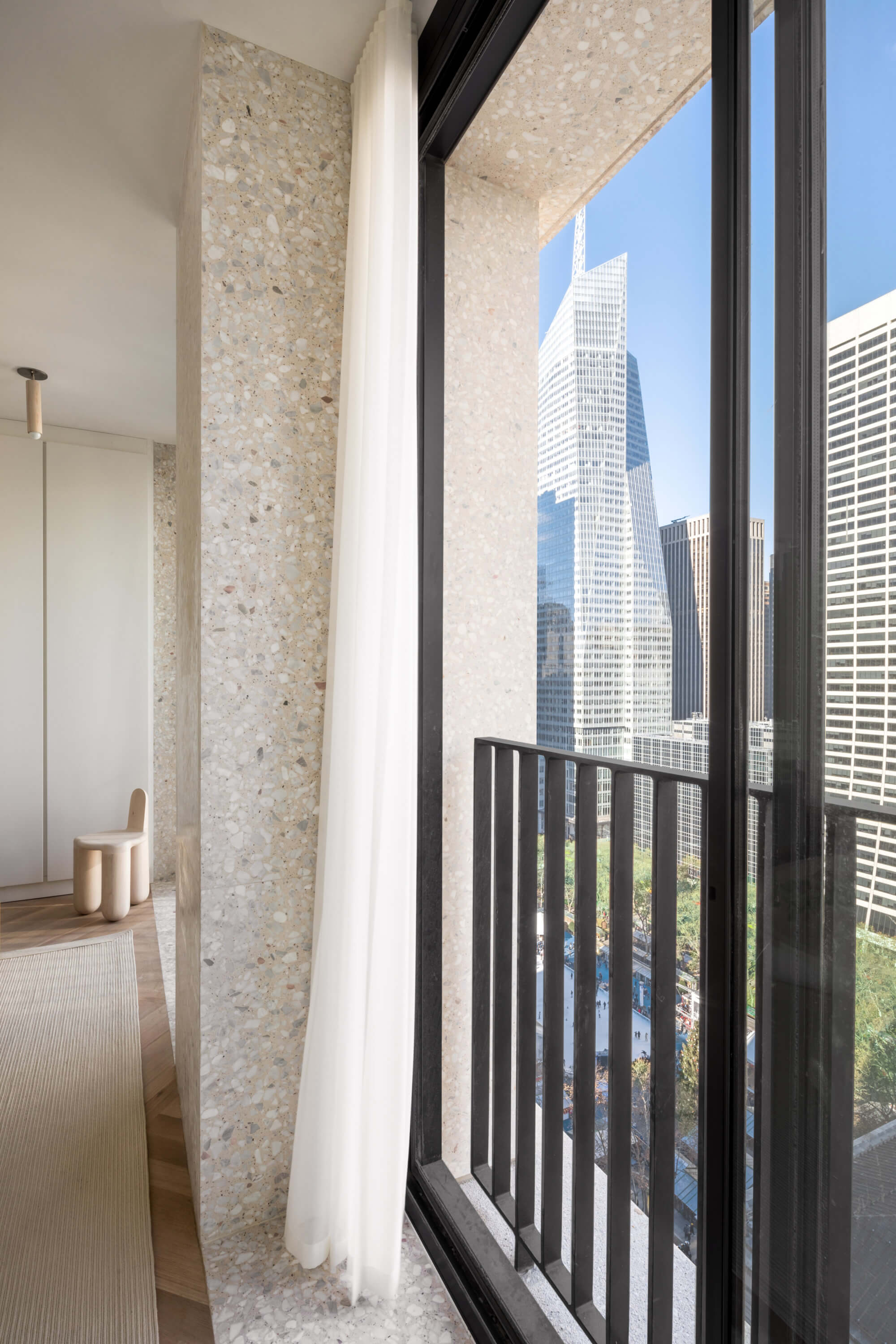 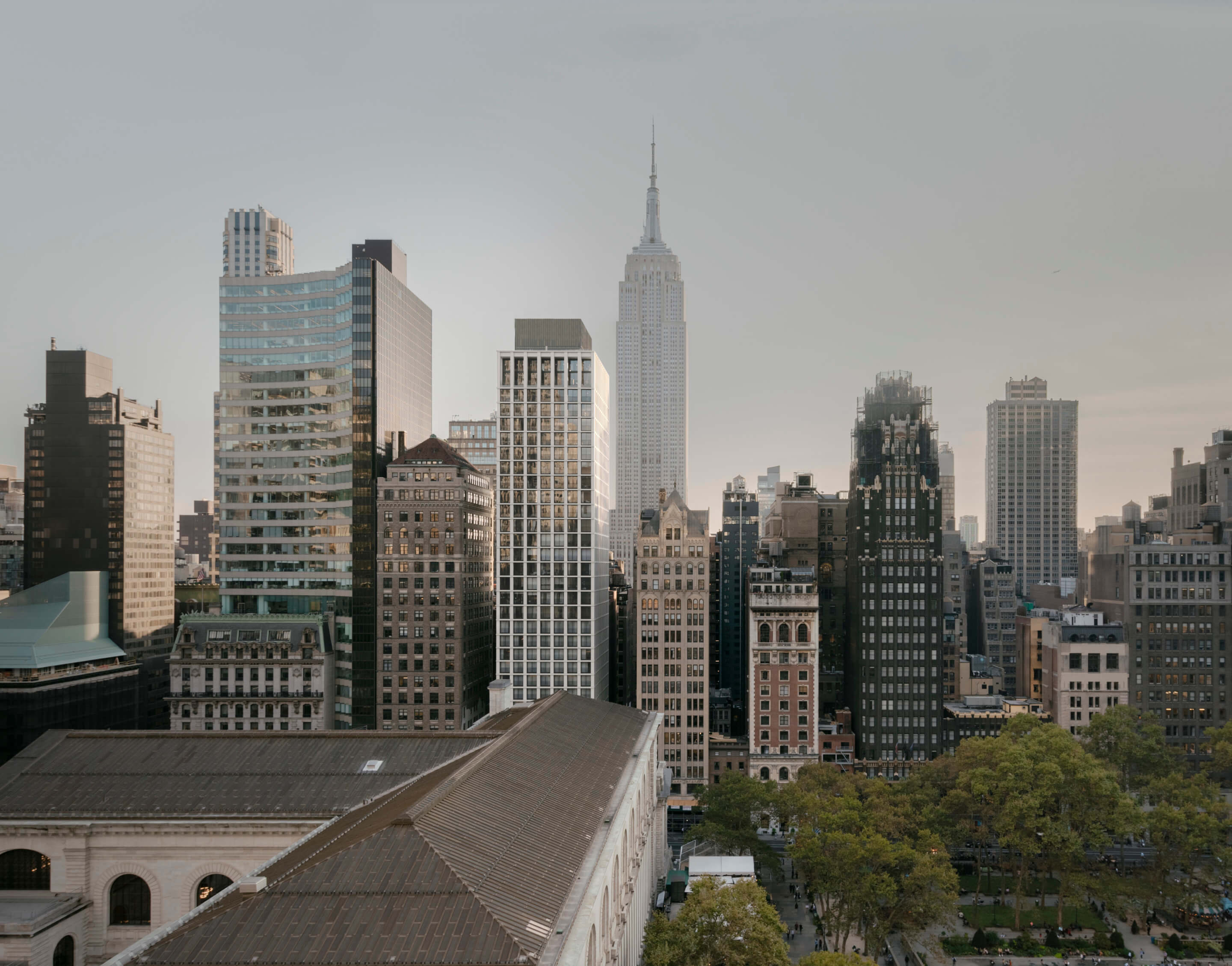 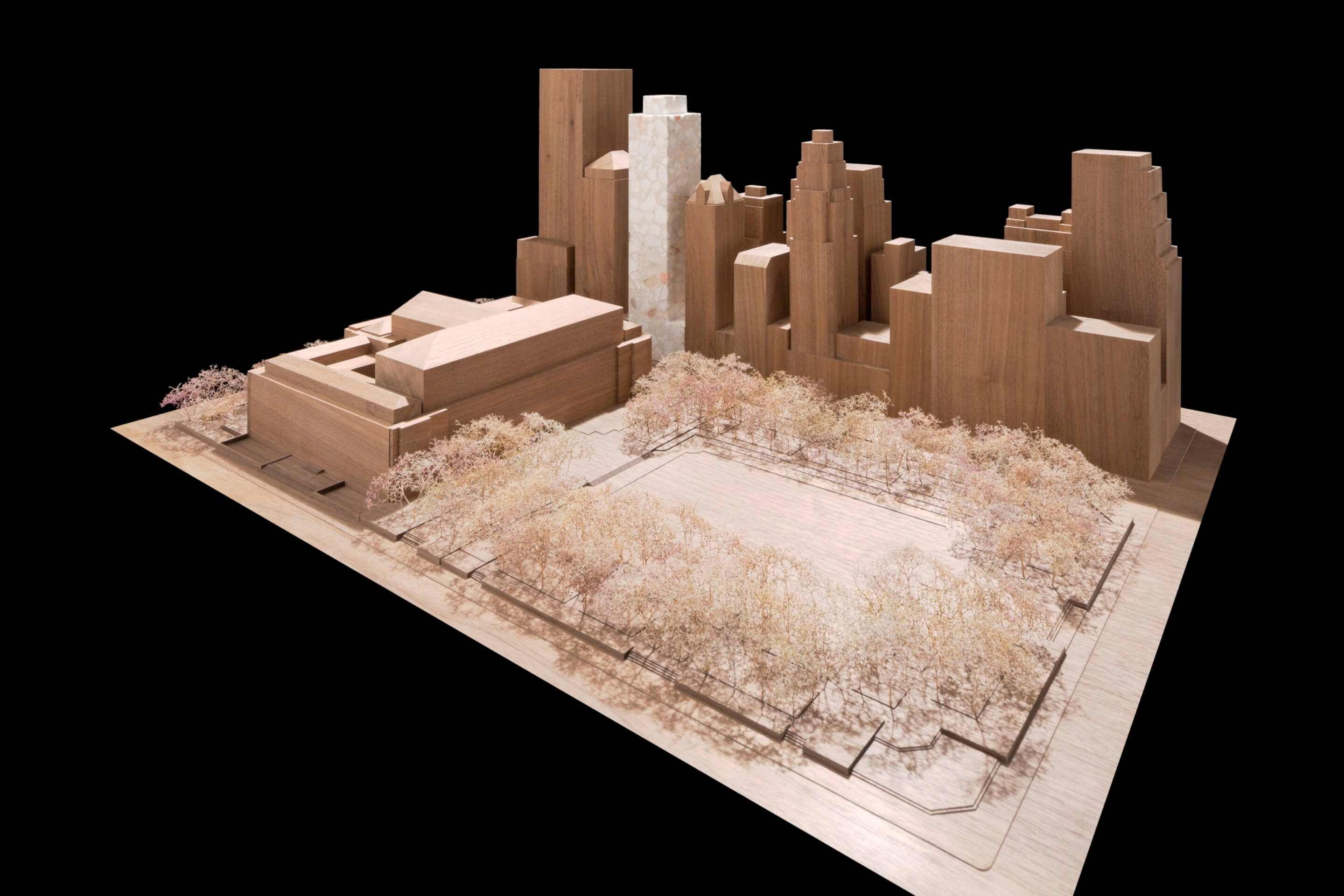 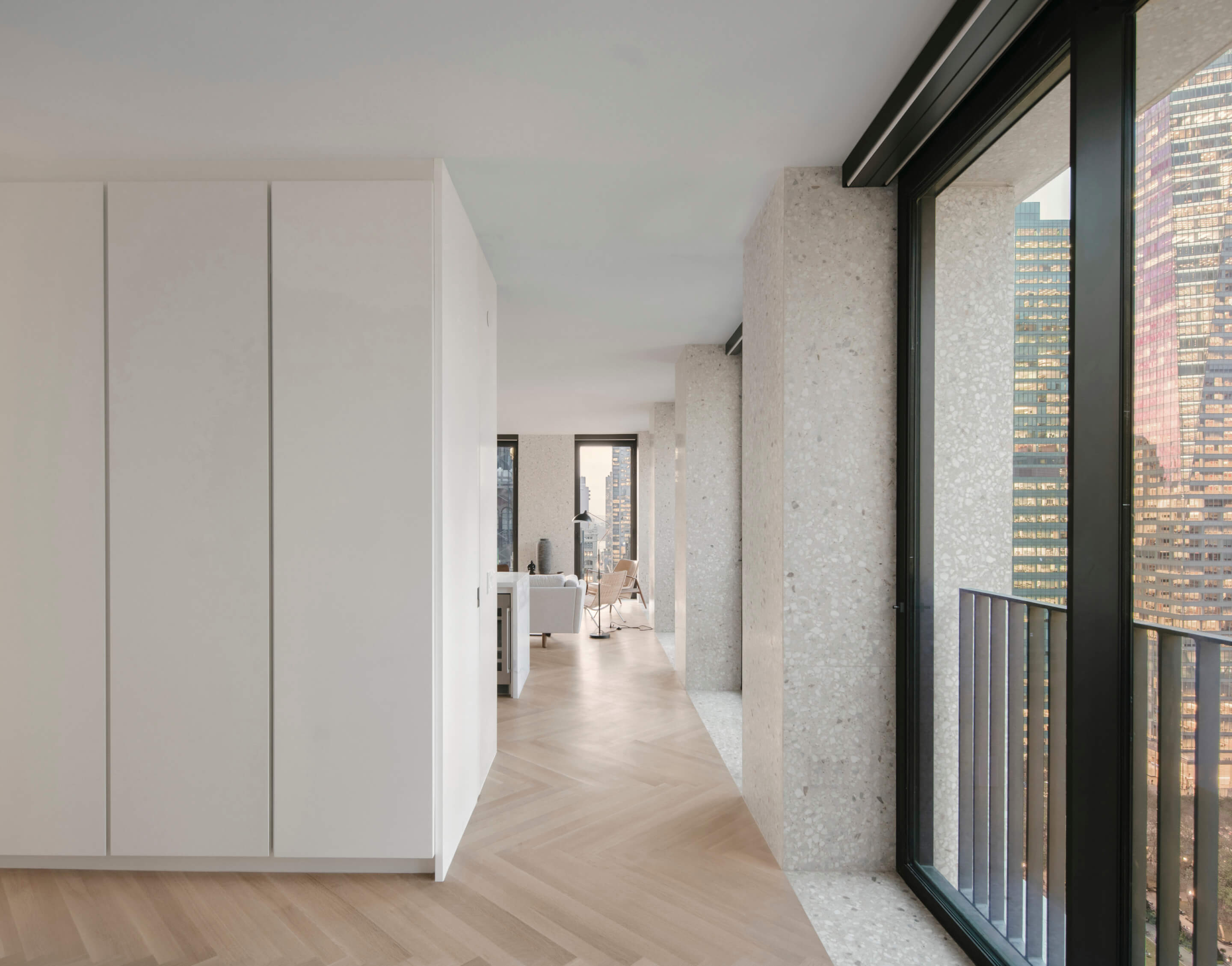 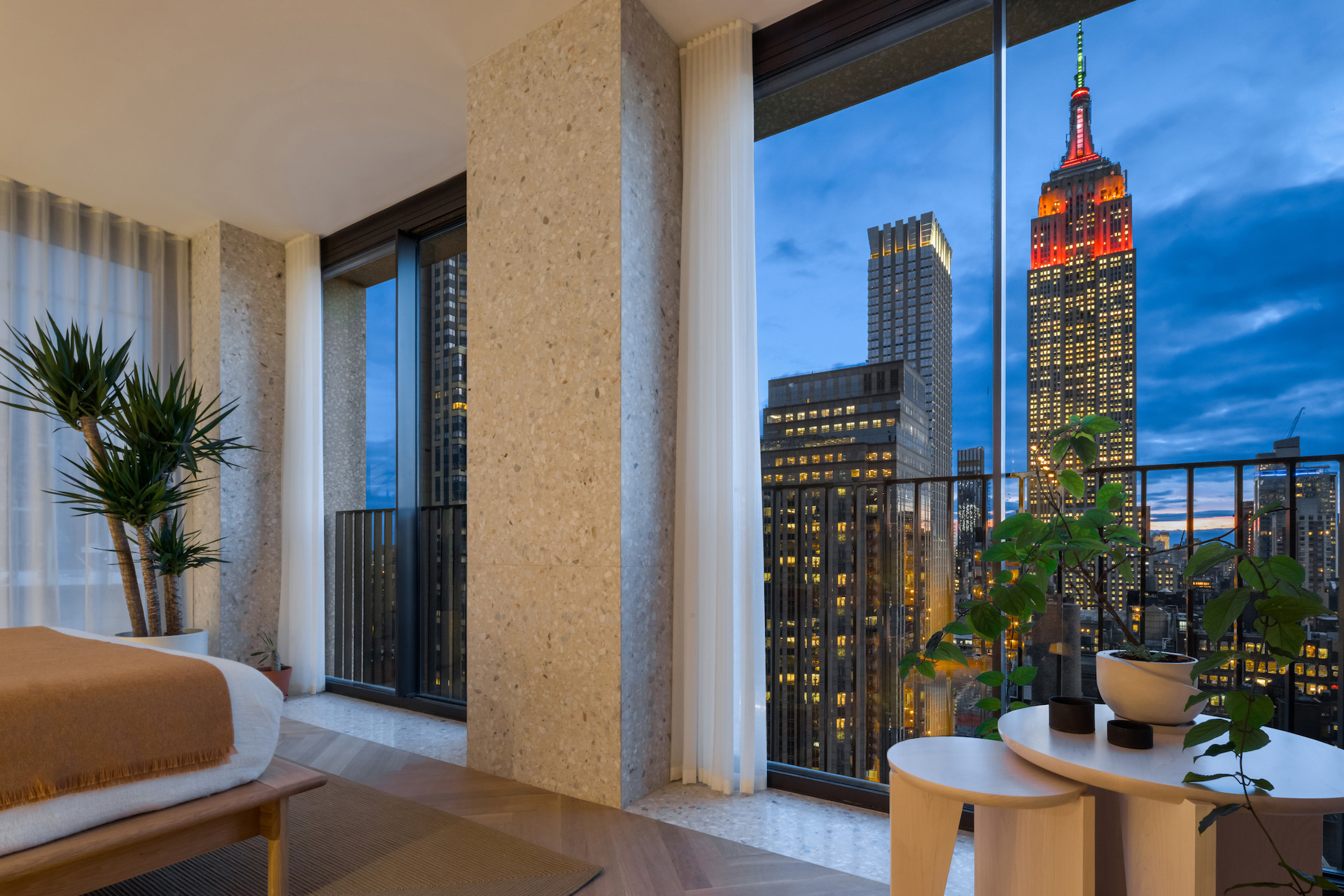 <
►
>
The gridded facade is built of precast concrete panels with a terrazzo-like aggregate. The minimal sightline of the window framing highlights their materiality and outward views (Courtesy Mattias Kuntz/ David Chipperfield Architects)

Bryant Park is bounded on three sides by office towers, done up in the styles that span the better part of the 20th century. While mirrored glass and other conspicuous finishes that scream “the eighties” predominate, there is also the charcoal brick of the eclectic Gothic art deco American Radiator Building; the park’s fourth edge is defined by the Beaux-Arts New York Public Library, clad in a milky Vermont marble. DCA, which has an extensive background with sensitive infill, devoted considerable effort to pairing the tower with its neighbors, with particular attention to the building’s material composition. Terrazzo-finished precast concrete panels—an effect achieved with an aggregate of white marble, quartz, and variegated limestone—frame generously sized glazing bays, into which nine-foot-tall floor-to-ceiling windows are set.

Operable windows are not in and of themselves novel features in the city’s residential skyscrapers. However, the system used here, Vitrocsa’s Invisible Wall sliding window doors, is notable for its remarkably slender ¾-inch vertical sightlines, which pair well with the tower’s crisp, rectilinear forms.

Manufactured at Vitrocsa’s Culver City, California, plant, the operable windows appear on the north and south facades and are fronted by Juliet balconies of black vertical pickets. Compared with a typical curtain wall, Vitrocsa’s system is effectively structural glazing engineered to be operable at both ground level and tower heights. At The Bryant, the 7-foot-9inch by 9-foot-7inch modules are outfitted with the manufacturer’s MODULAR or TH+ profiles, which are capable of handling greater wind loads. Each module comprises of an external and internal insulated glass unit, both of which are operational, with tracks attached to an aluminate plate and waterproofed with silicone and a 1/18-inch still pan.