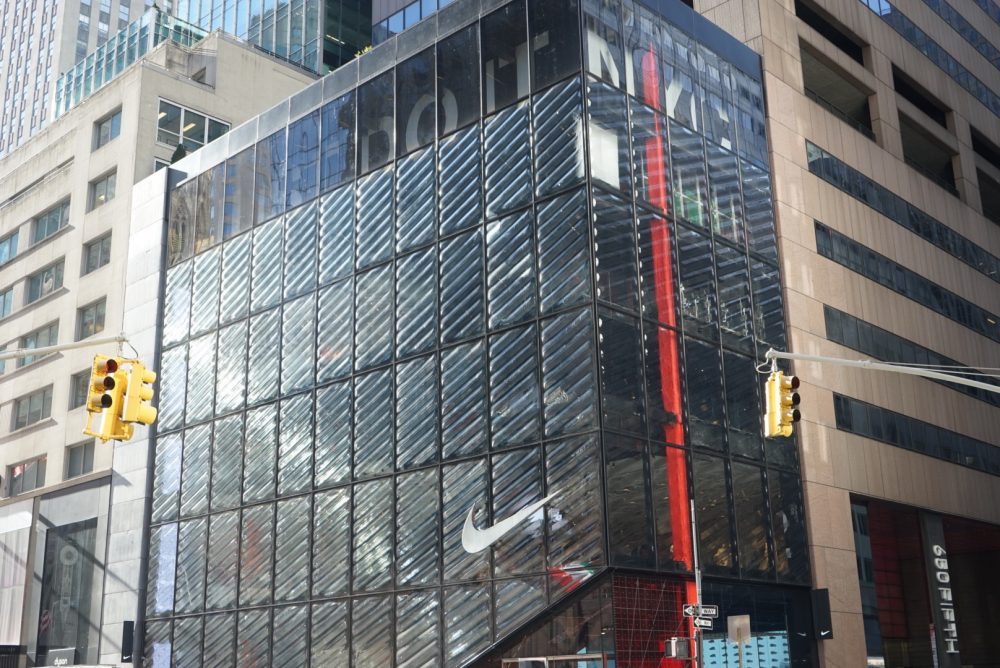 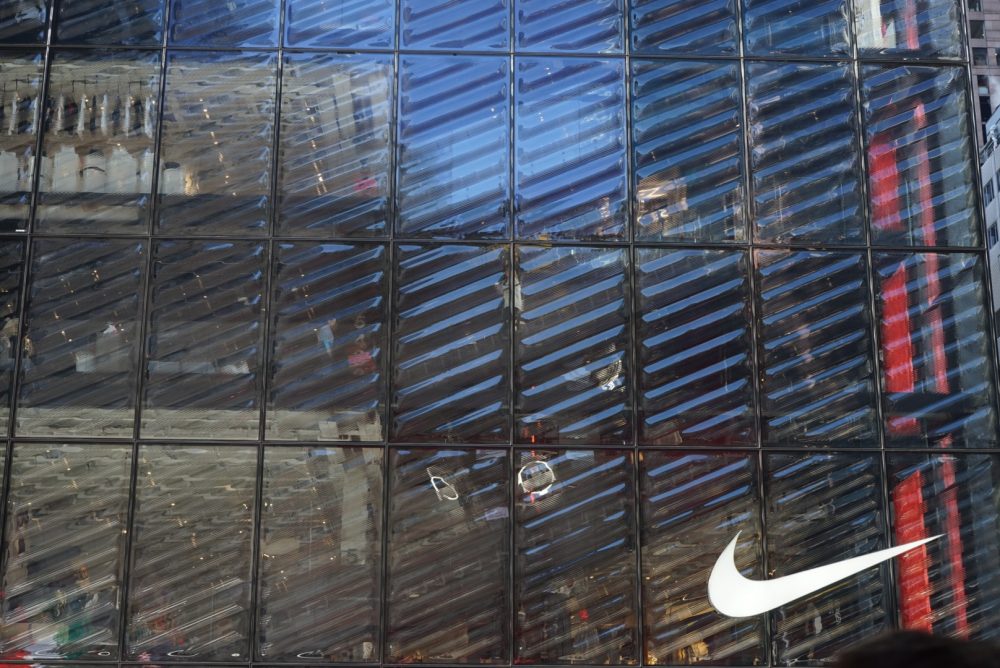 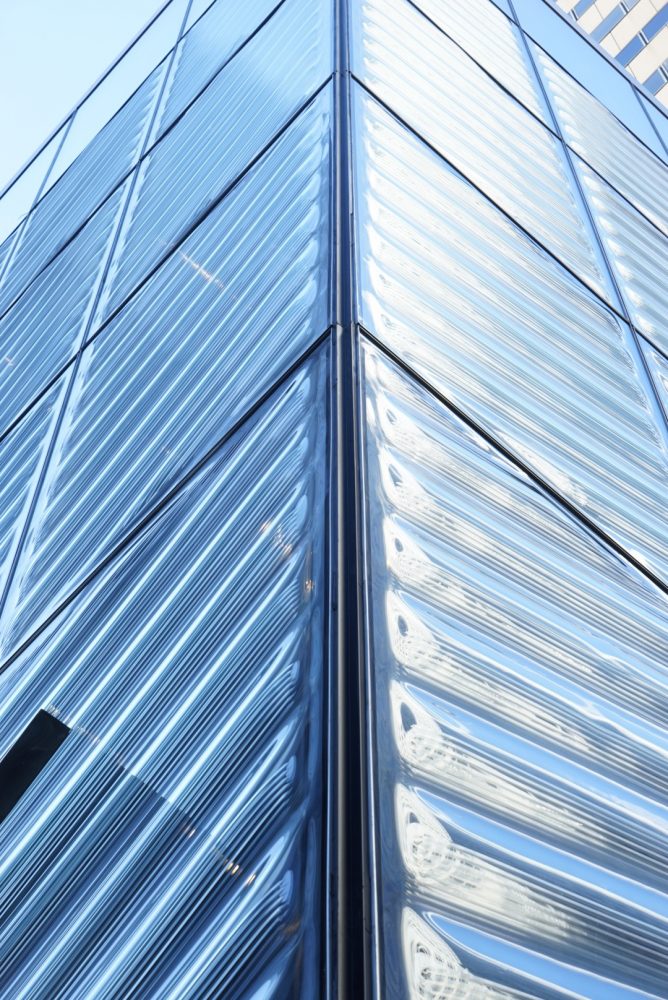 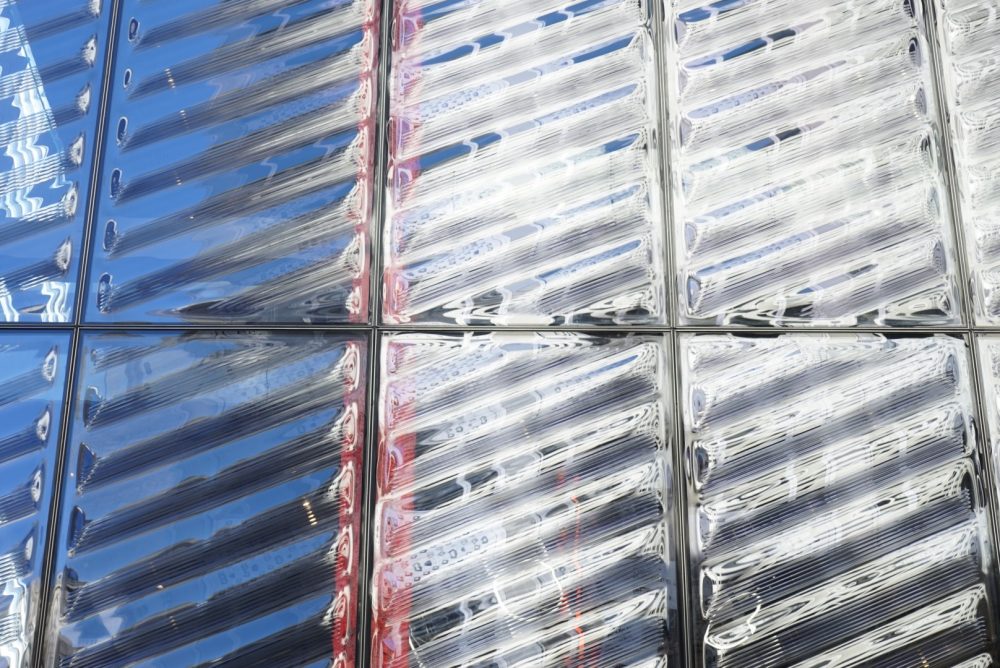 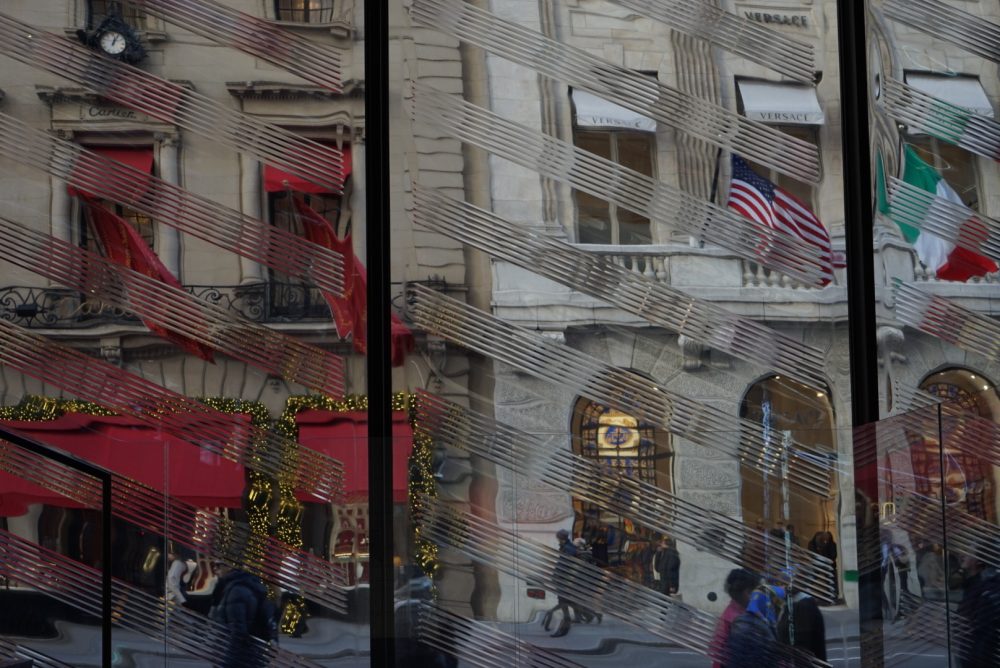 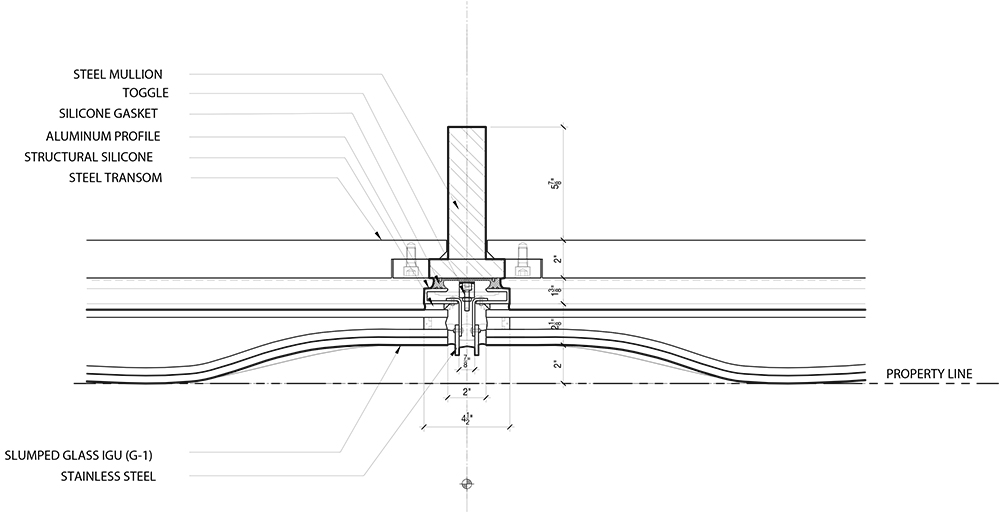 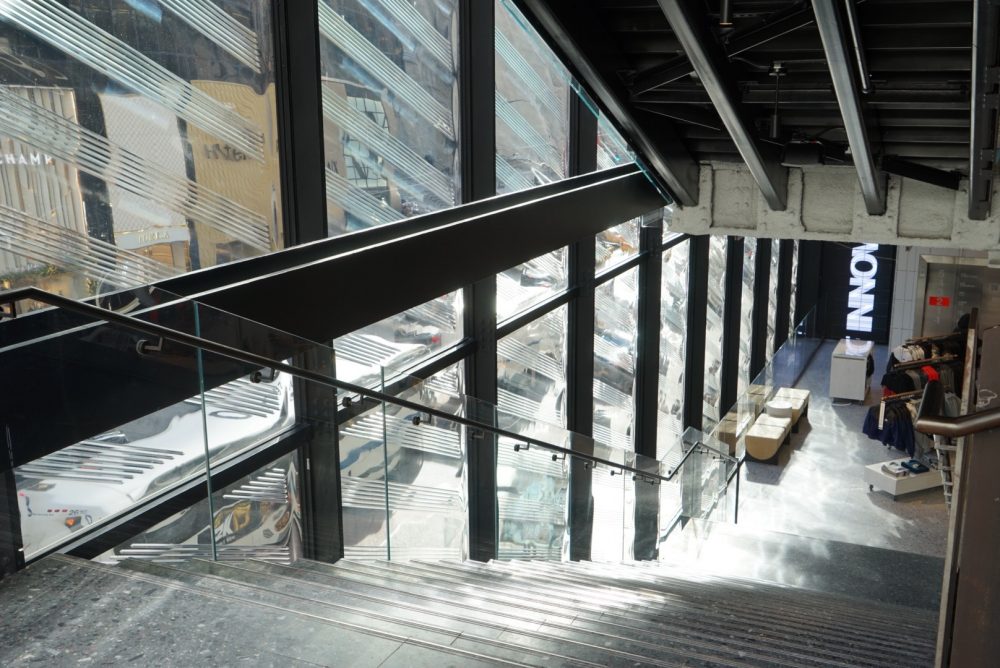 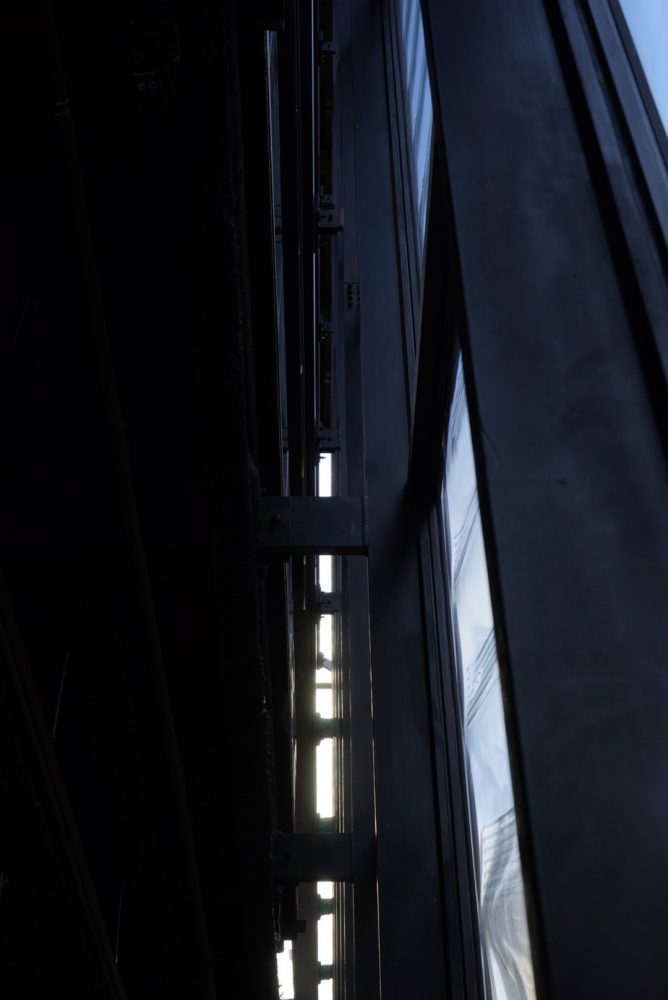 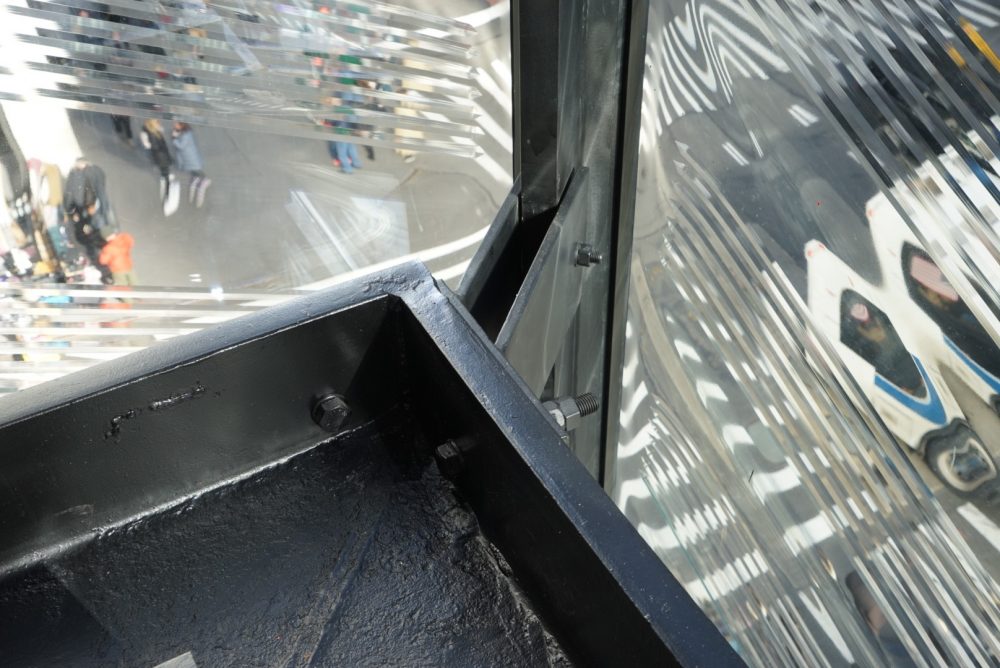 On the corner of Manhattan’s Fifth Avenue and 52nd Street, the Nike House of Innovation announces its presence on this stretch of largely historic masonry structures with a striking slumped-and-carved glass facade. The 68,000-square-foot recladding and interior design project replaces the avenue elevation of the concrete-and-glass Pahlavi Foundation Building (formerly owned by the Shah of Iran and recently seized by the Federal Government).

For the six-story structure’s recladding, the design team reached out to Spanish glass manufacturer Cricursa. Based in Barcelona, the company has specialized in curved glass since the early-20th century. To give the glass its shape, the modules are slowly heated to the softening point, around 1000 degrees Fahrenheit, where the materials slumps into customized molds. Once the glass panels have achieved their desired geometry, they are slowly cooled in a process called annealing. Installed as a double-glazed curtain wall, a low emissivity coating was applied to each panel to reduce heat transfer on both sides of the glazing.

The size of the glass modules is largely standardized, measuring approximately 8 by 14 feet. However, where the entrance tapers upward, Cricursa fabricated three variations of trapezoidal panels and a singular triangular panel.

The glass manufacturer fabricated five full-scale mockups of the modules to allow for thermal and structural load testing prior to full production. After testing, approximately 100 windows were shipped to Seele GmbH’s facility in Augsburg, Germany, for assembly.

Novel in terms of architectural application, the slumped glass was also CNC-carved with a series of striations perched at a 23.5-degree angle in the style of Nike’s iconic Swoosh logo. Andy Thaemert, Nike senior creative director, described this effect as accomplishing the brand’s goal to “create static architecture that feels like it’s in motion.” From street level and within the House of Innovation, views through the glass present constantly shifting refractions of adjacent buildings.

As a re-cladding project, the facade’s assembly is relatively straightforward. According to Heintges, the facade consultants for the project, “the glass facade is hung from the existing roof level with a grid of custom shaped steel mullions and transoms, pinned back for lateral loads at the 5th, and 3rd floor, and just above the ground.” In total, the exterior envelope went from steel to glass in roughly four months.

The project follows the Nike House of Innovation 001 constructed in Shanghai in October 2018, while a third is planned for Paris in 2019