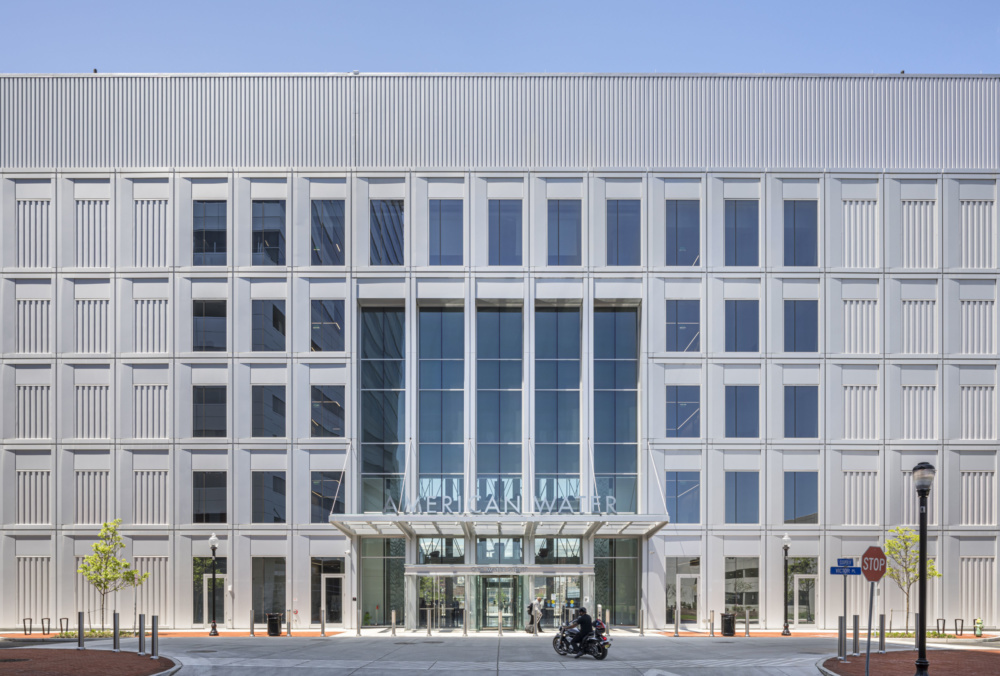 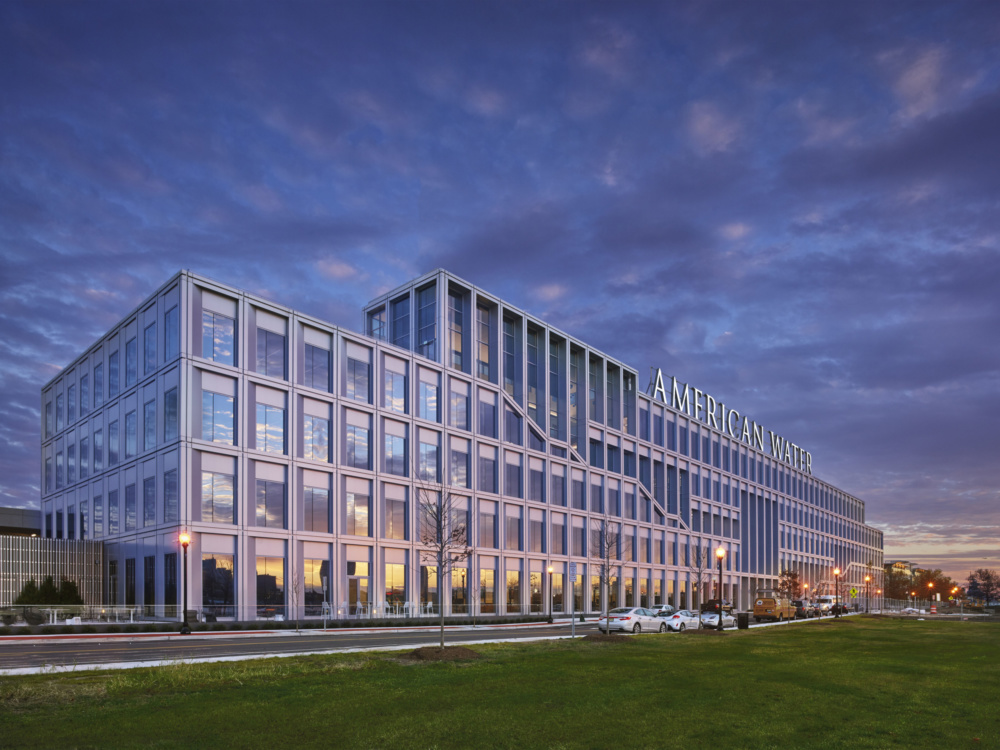 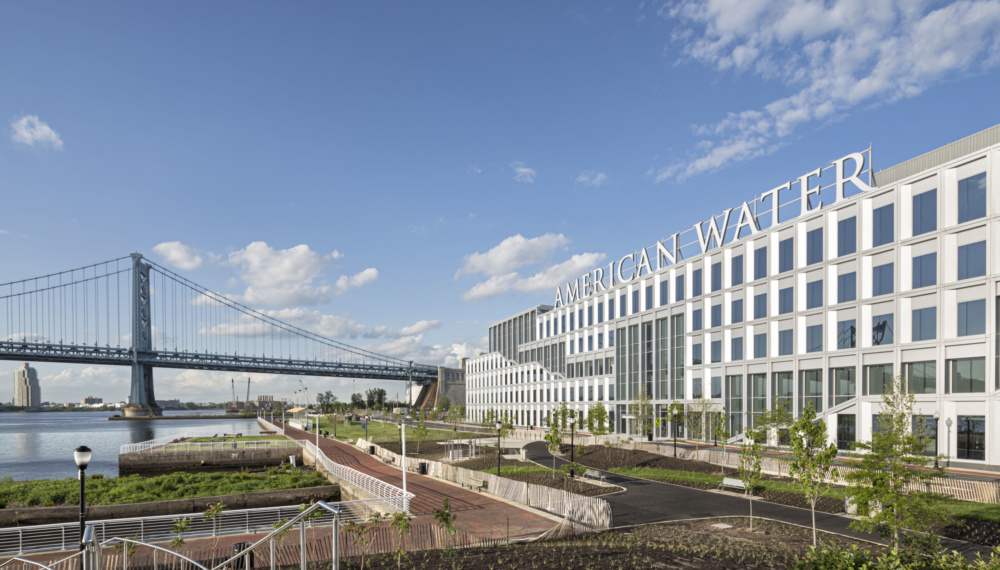 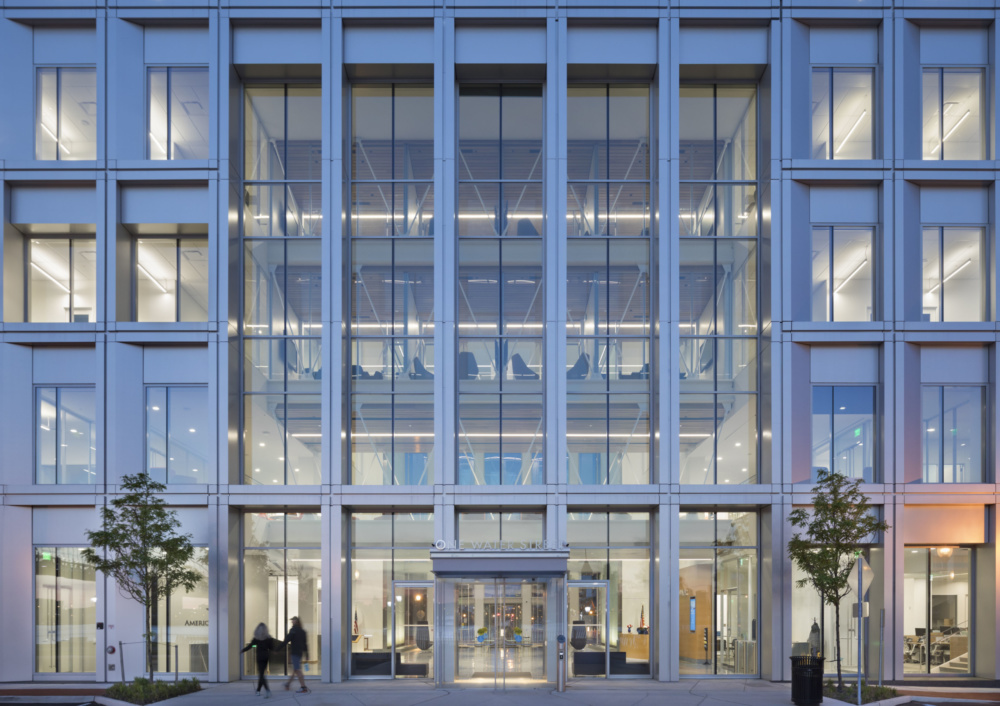 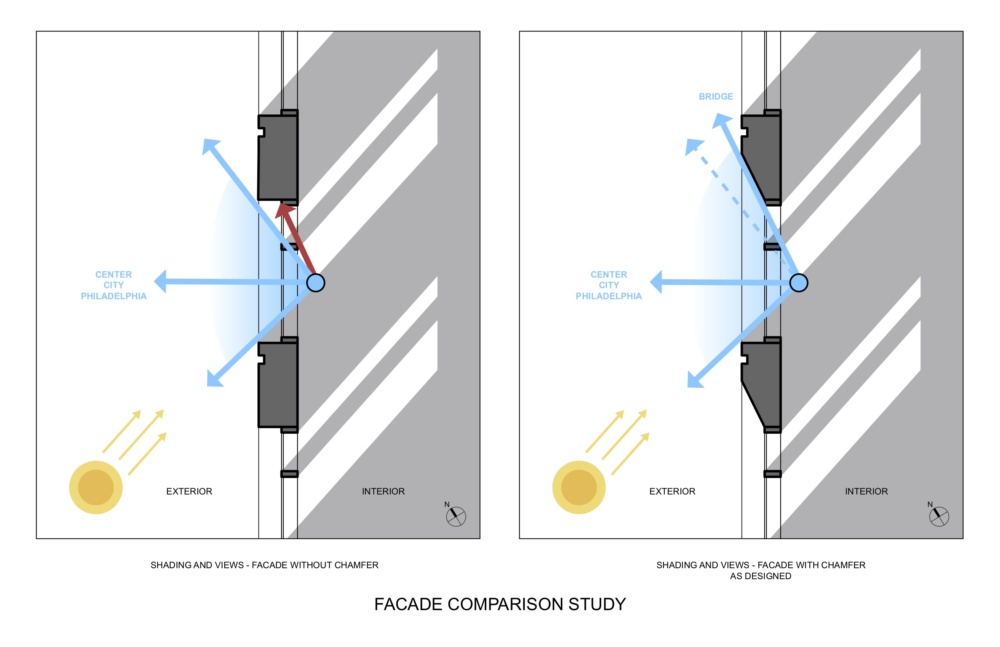 <
►
>
The use of chamfered facade panels provides solar shading while allowing for direct views of the Philadelphia skyline. (Courtesy RAMSA)

The footprint of the 230,000-square-foot project is narrow and rectangular as a measure to provide the office block with the greatest possible degree of water frontage. The east and west elevations are, as a result, 530-feet-long, highly visible throughout Camden and Philadelphia, and receive a remarkable degree of solar exposure.

For RAMSA, the material choice of aluminum composite, and its bespoke detailing for the American Water HQ, addressed contextual concerns and performance requirements. “We sought a material with a subtle yet lively reflective sheen to respond to the ever-changing sun and sky,” said RAMSA partner Meghan McDermott. “The color of panels varies from white to silver to dark gray at various times throughout the day, and at sunset, the facade glows with pink and purple tones.” For the design team, it was critical to maintain outward views whilst mitigating solar gain and glare. The use of chamfered and recessed facade panels was a response to this performance requirement, and their design was developed over the rigorous study of sun angles and sightlines.

Notably, the project’s facade is not unitized but was assembled on-site from individual components. Manufacturer Almaxco produced and painted the aluminum composite sheets at their plant in Singapore. The sheets were then shipped to New Jersey for assembly by fabricator and installer Bamco. The decision to assemble on-site resulted from costs associated with prefabricated panelized systems as well as the logistical challenges of transporting what would have been 10-by-16-foot modules through densely populated southern New Jersey. Although the construction of the facade was not realized until installation, RAMSA and facade fabricator Bamco conducted several full-scale mock-ups at their facility to review detailing issues while also rehearsing installation and assembly.

There were areas of particular scrutiny within the overall facade assembly; slip-joints at the reveals, the corner medallions of the panels, and the traveling stair of the west elevation. According to McDermott, “The angles at the traveling stair were especially tricky—triangular panels of glass had to work within minimum glass dimensions for coatings, and the medallions had to follow the slope, requiring origami-type folding of the individual pieces.”

Although composite aluminum is the facade’s primary stylistic element, certain moments break from this material-centric approach. The two entrances, located at the center of the east and west elevations, are denoted by four-story structural glass walls that illuminate the building’s atrium and are on axis with Cooper Street towards the center of Camden.