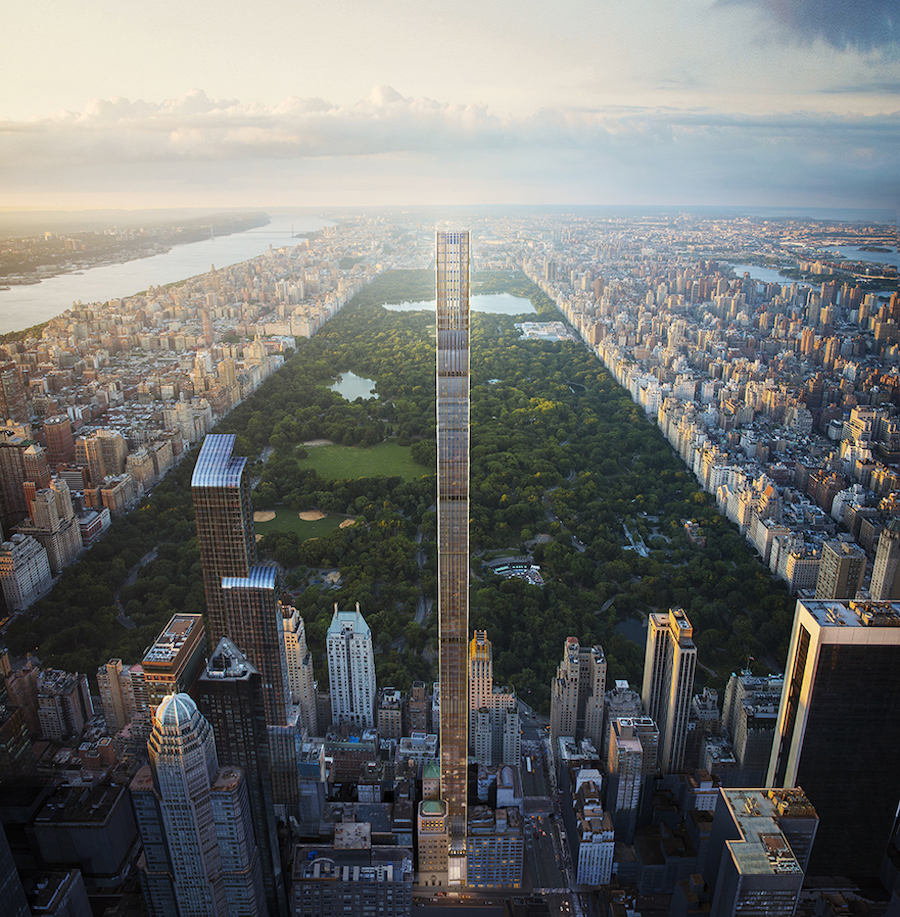 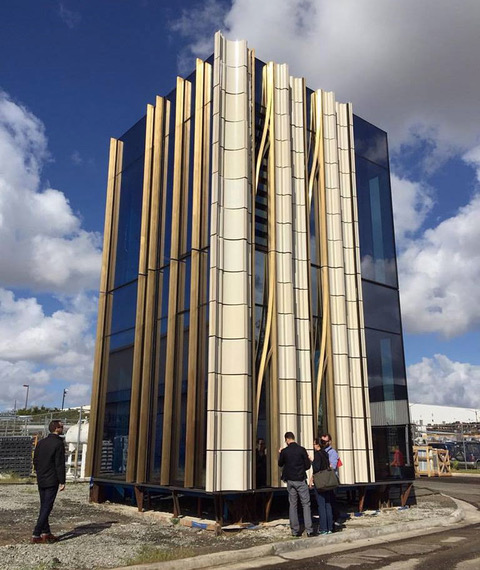 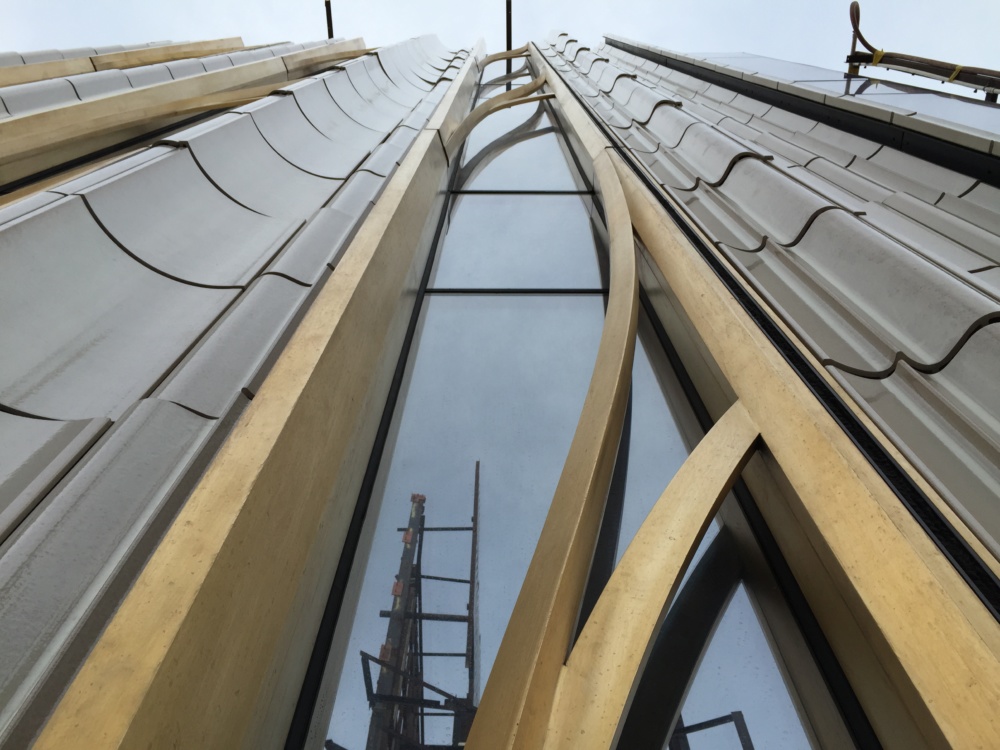 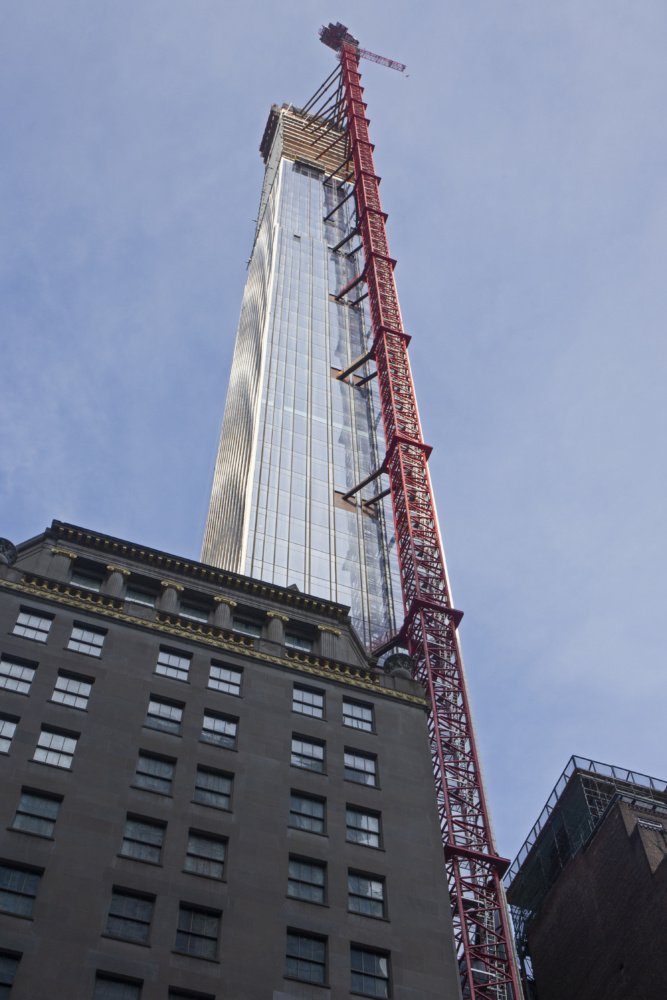 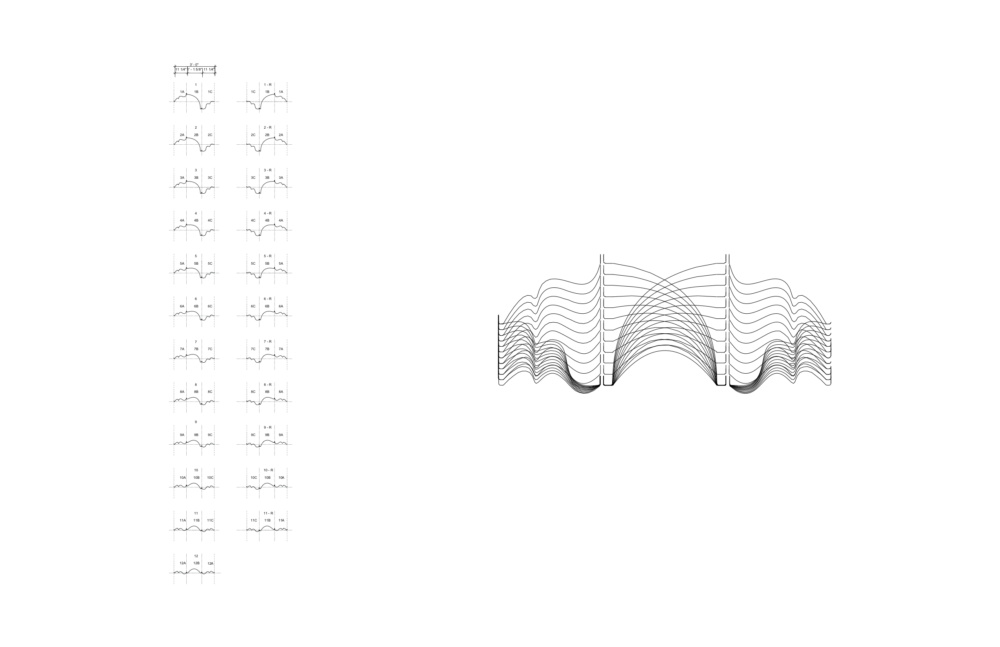 <
►
>
The design of the quasi-fluted terra-cotta strips was formulated using a 3-D wave geometry generated by a computational script. (Courtesy SHoP Architects)

Over the last two decades, SHoP Architects has pushed the envelope of facade design, leading a notable shift from predominantly glass-clad skyscrapers to supertalls incorporating a variety of materials. SHoP’s 111 57th Street is currently rising on Manhattan’s Billionaires’ Row—a stretch of dizzyingly luxurious towers. The tower stands out with a facade that incorporates three materials: terra-cotta, glass, and bronze ornamental work.

The tower rises from a narrow lot located immediately behind and adjacent to the historic Steinway Building. In the mold of historic New York skyscrapers, the tower sets back and tapers upward along its south elevation. Both north and south elevations are clad in a glass curtain wall with vertical strips of bronze sprouting into finials at each setback.

As a result of the site’s constraints, the approximately 1,400-foot-tall tower’s width runs at a remarkably narrow 45 feet—the width-to-height ratio comes out to just 1:24. Partnering with BuroHappold Engineering, a key challenge for the project was developing a facade system capable of supporting the weight of cladding materials, notably the terra-cotta panels.

Concrete shear walls back the facade for these two elevations with only select opportunities for punched window openings. “These select openings allow for vision glass to be used while the remaining glass panels contain shadow boxes,” said BuroHappold Associate John Ivanoff. “The unitized curtain wall panels are consistent in dimension across the width of the facade; the units are separated between different materials.”

The composition of the east and west facades is formed by a trio of terra-cotta, glass, and bronze. Curtain wall–manufacturer Ellic Americas merged the three materials into approximately 4-foot-by-16-foot panels, with bronze filigree fluttering between vertical stripes of glass and terra-cotta. These panels were then delivered to the site, craned into position, and hung from concrete structural slabs similar to typical curtain wall systems. 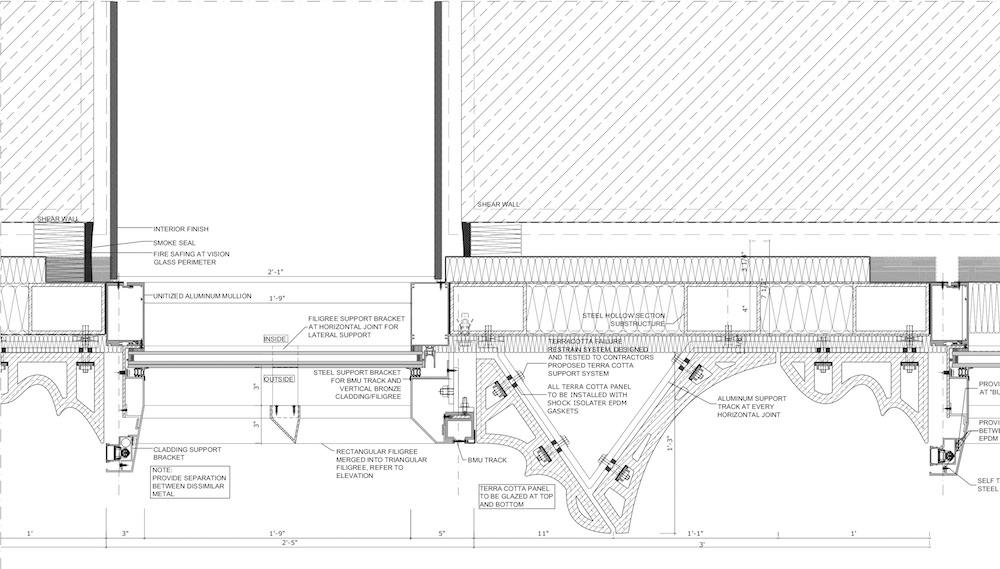 In total, nearly 43,000 terra-cotta pieces, mechanically fastened to a unitized aluminum curtain wall system, run across the two elevations. The design of the quasi-fluted terra-cotta strips was formulated using a 3-D wave geometry generated by a computational script. This geometrically focused design by SHoP was adapted by NBK Terracotta to conform to its specific fabrication parameters.

The building is scheduled to be completed in 2020.