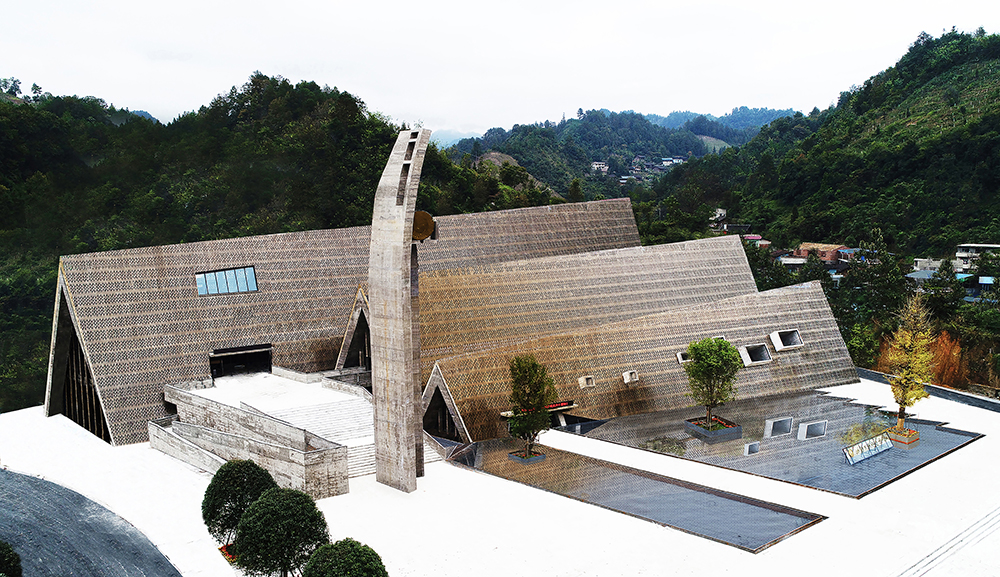 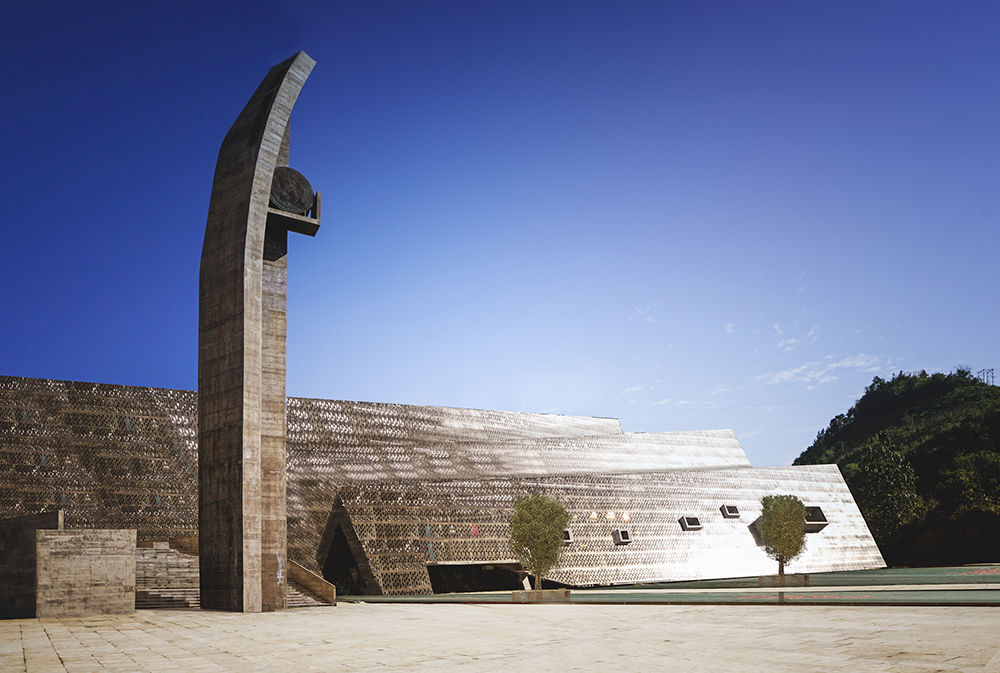 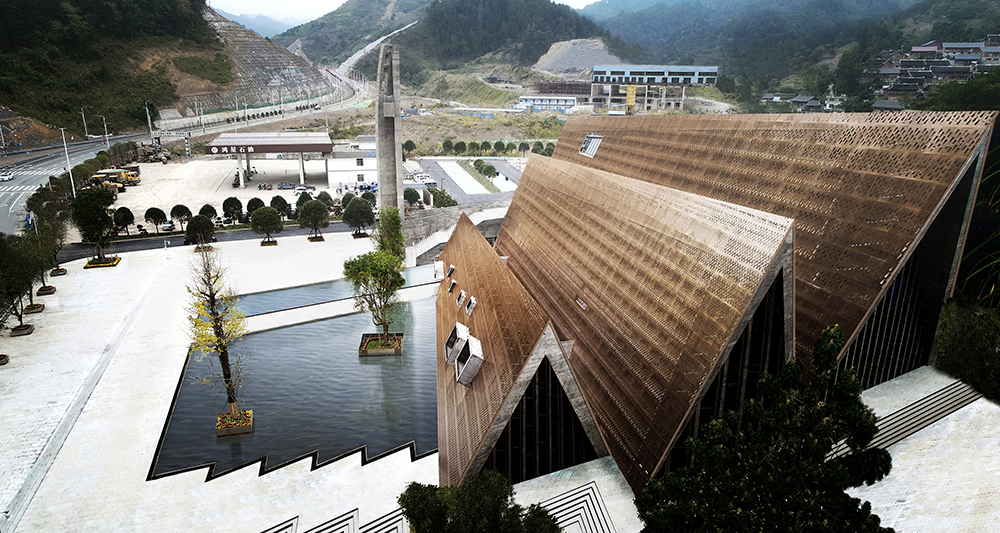 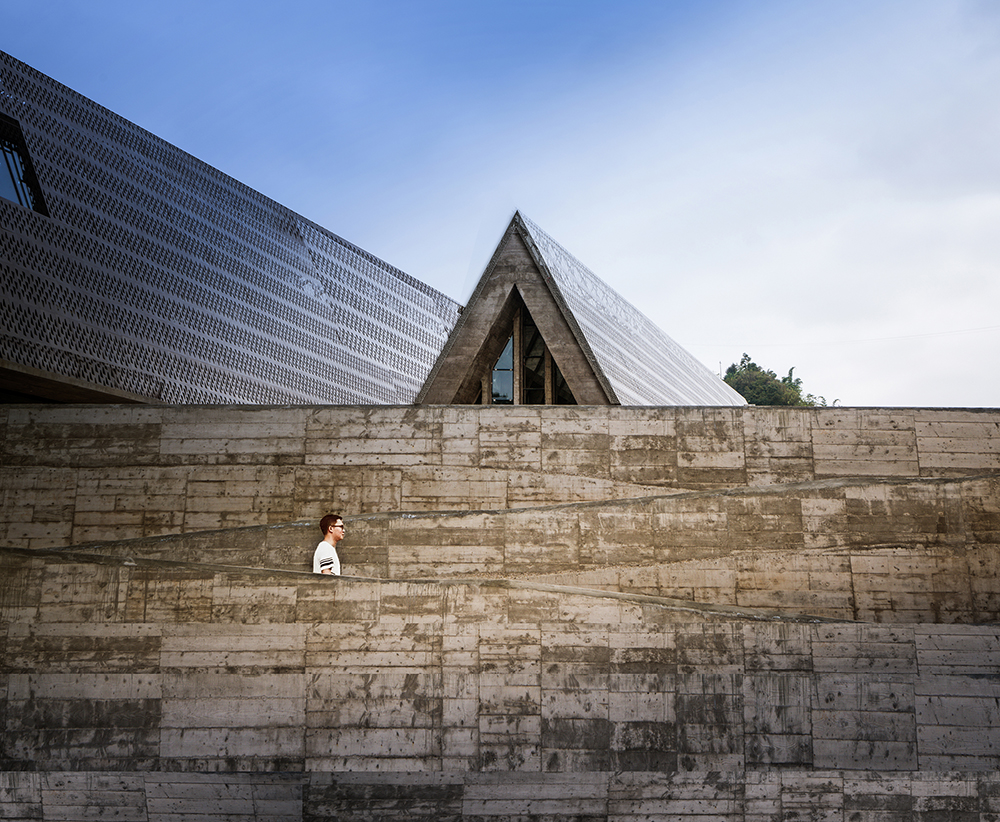 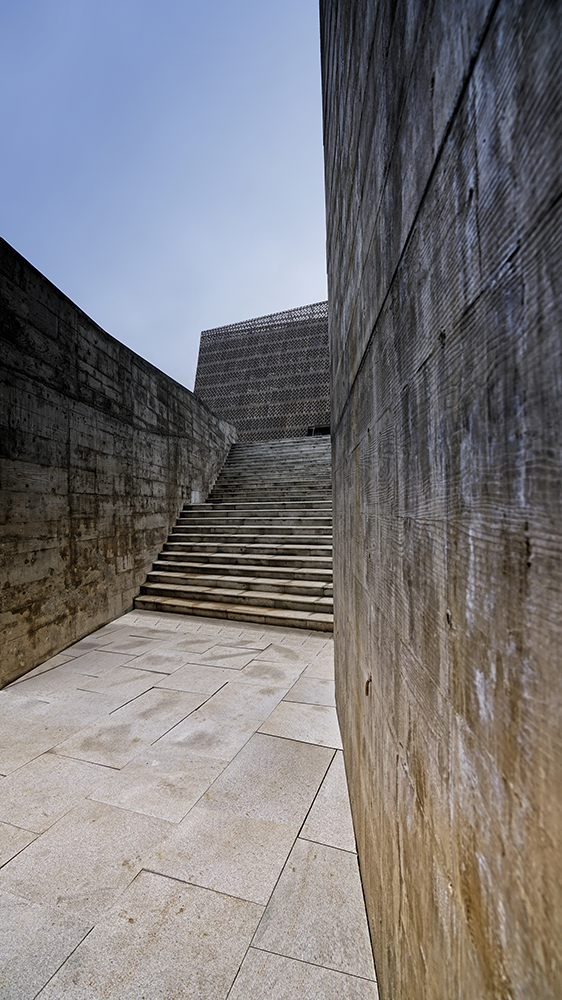 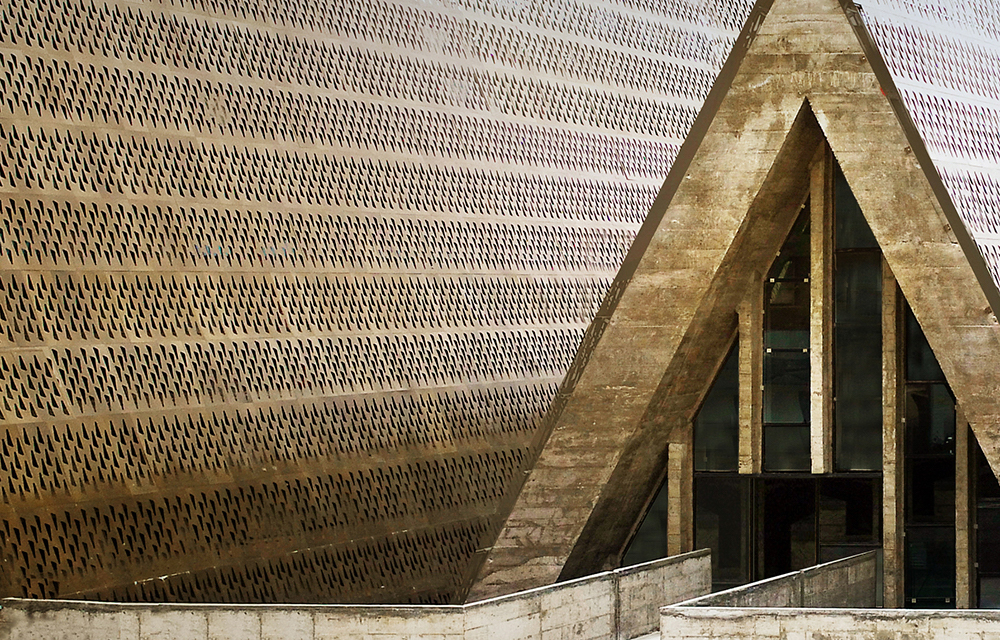 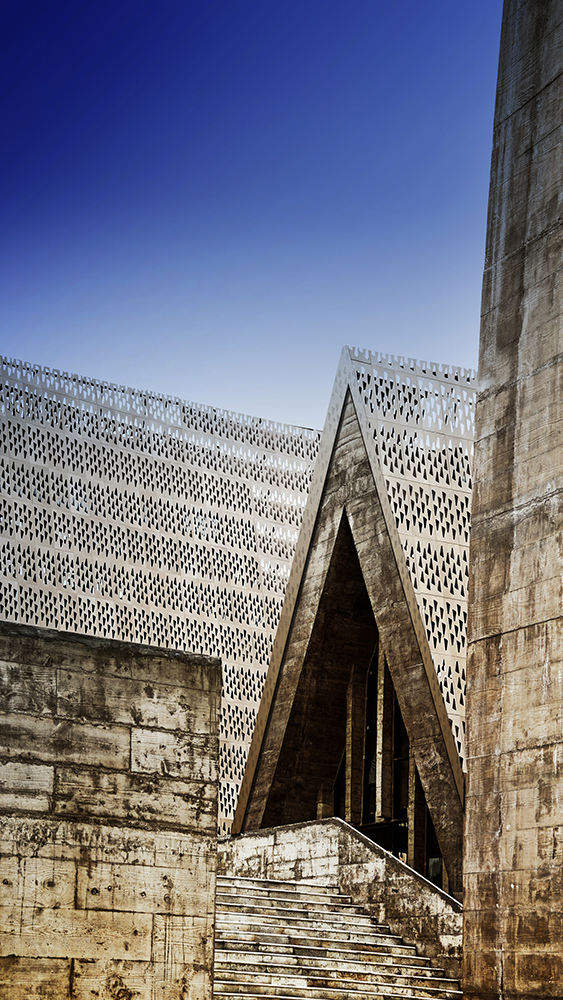 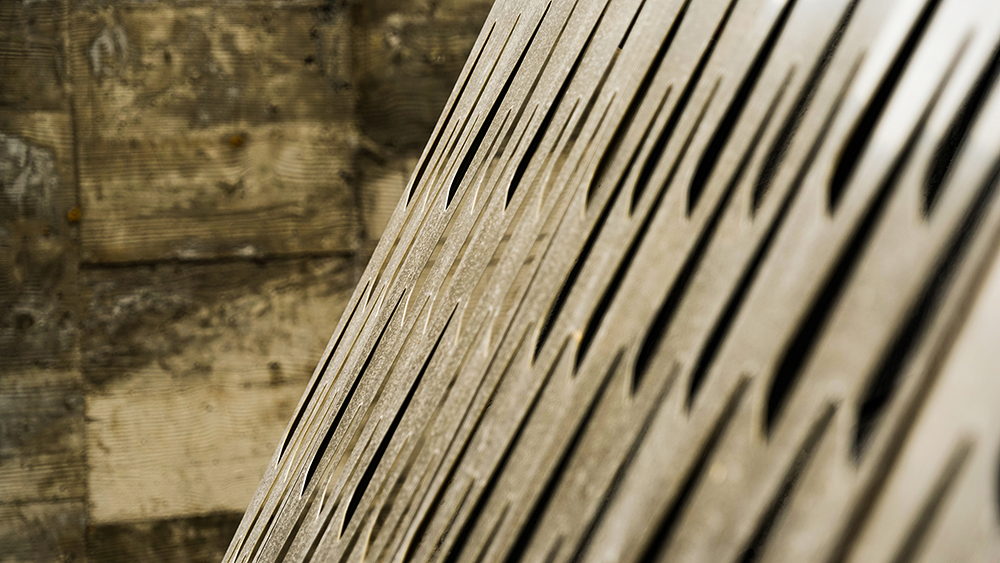 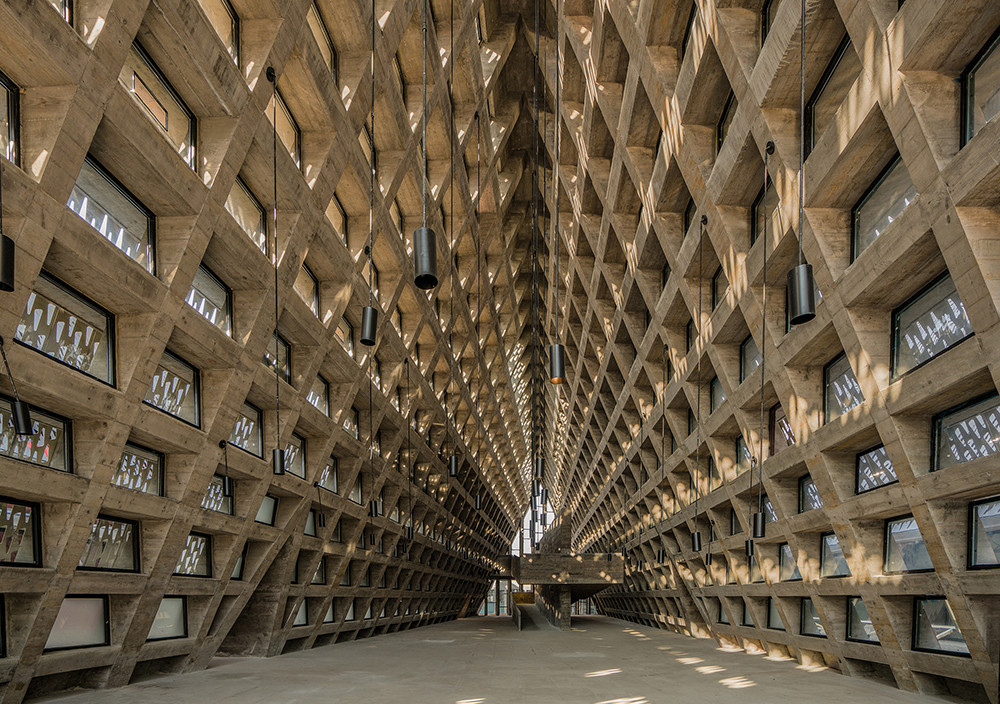 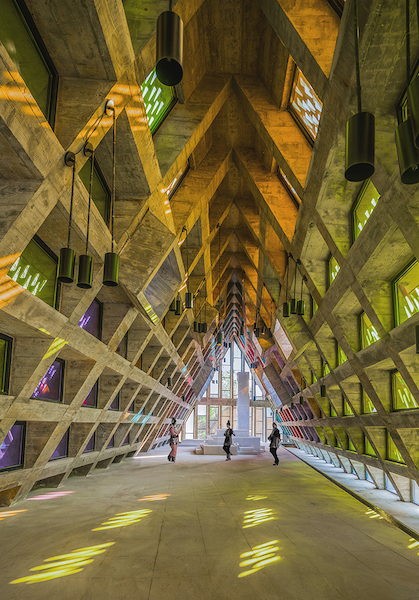 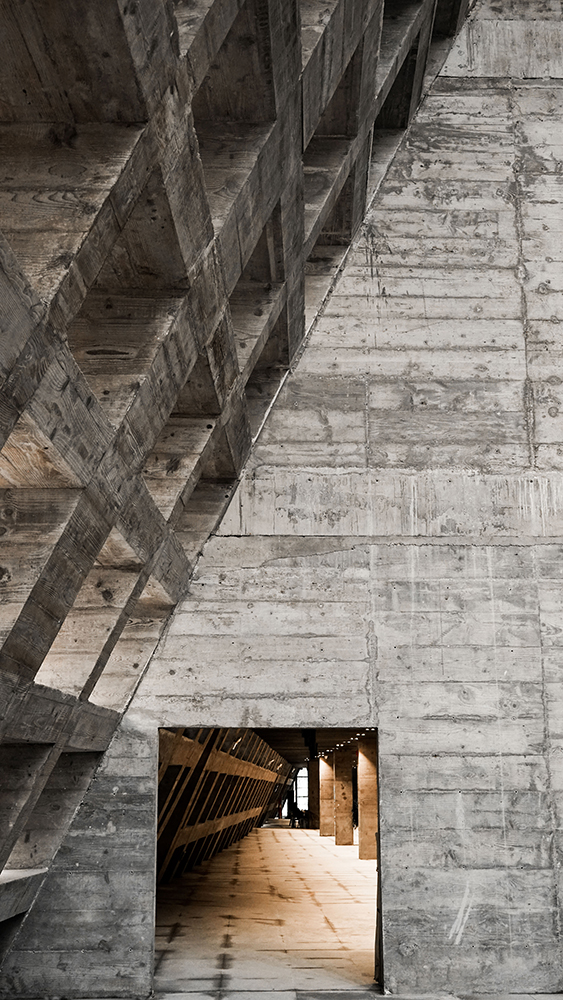 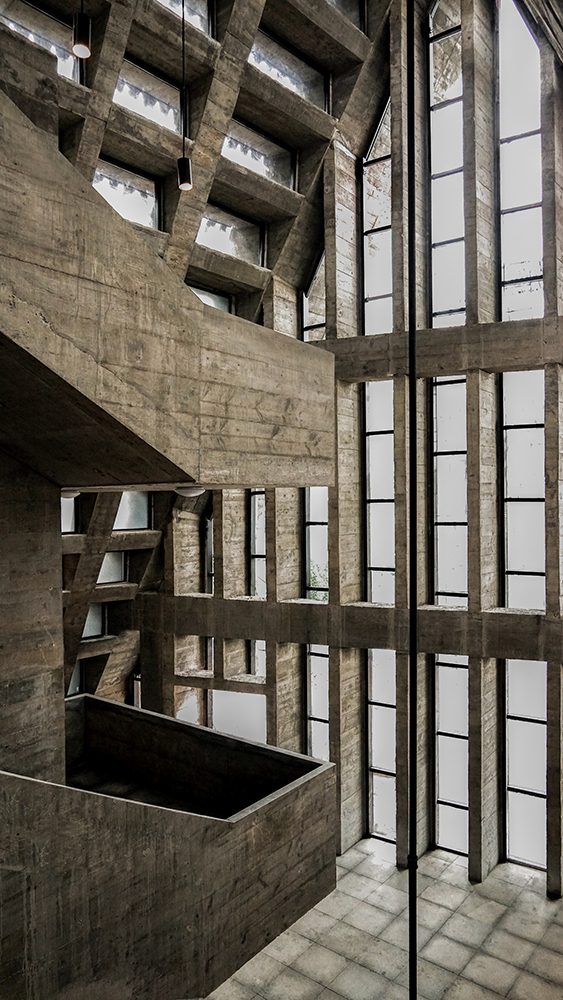 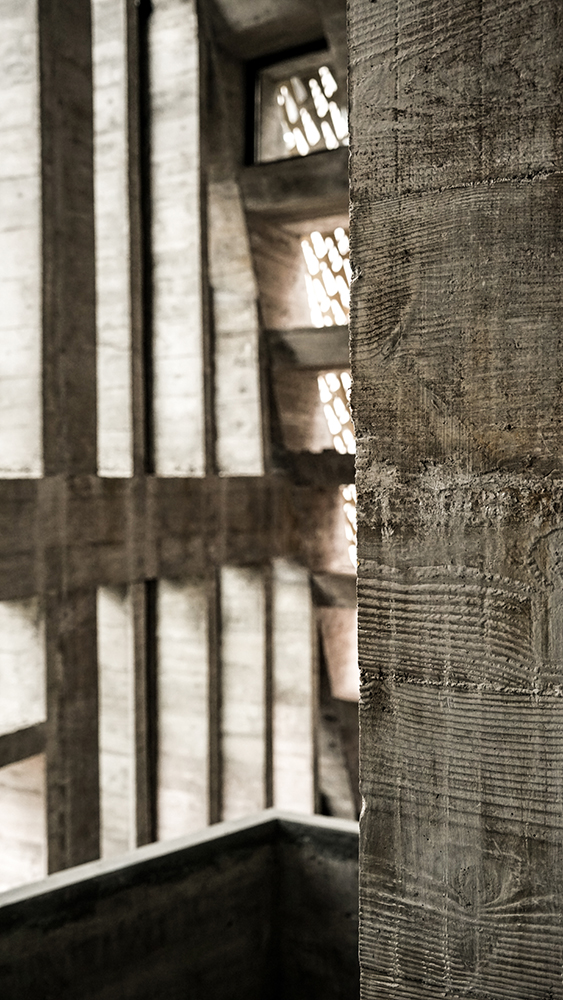 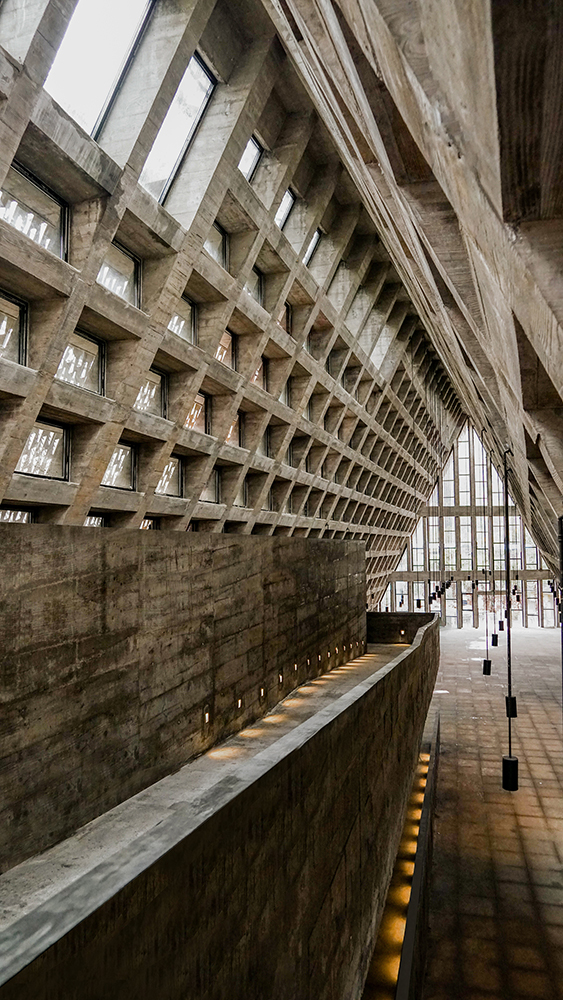 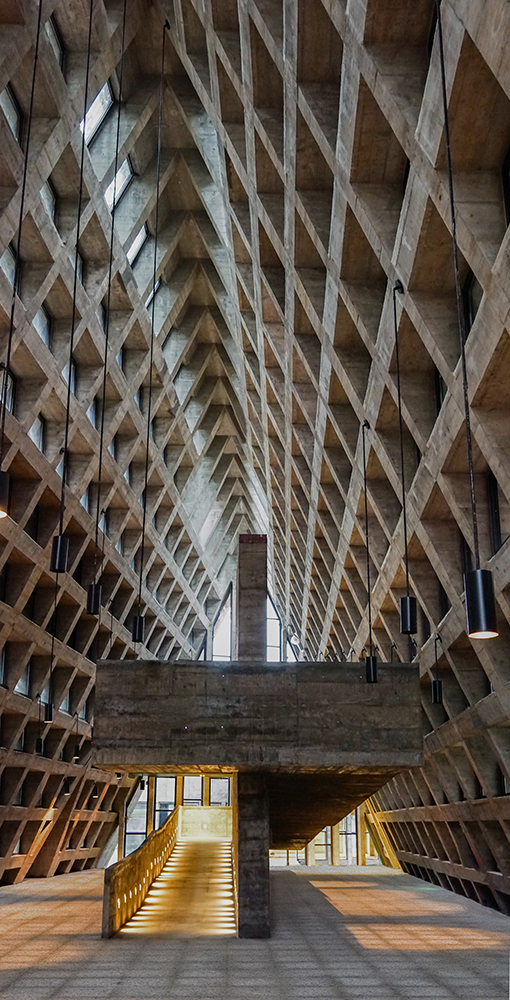 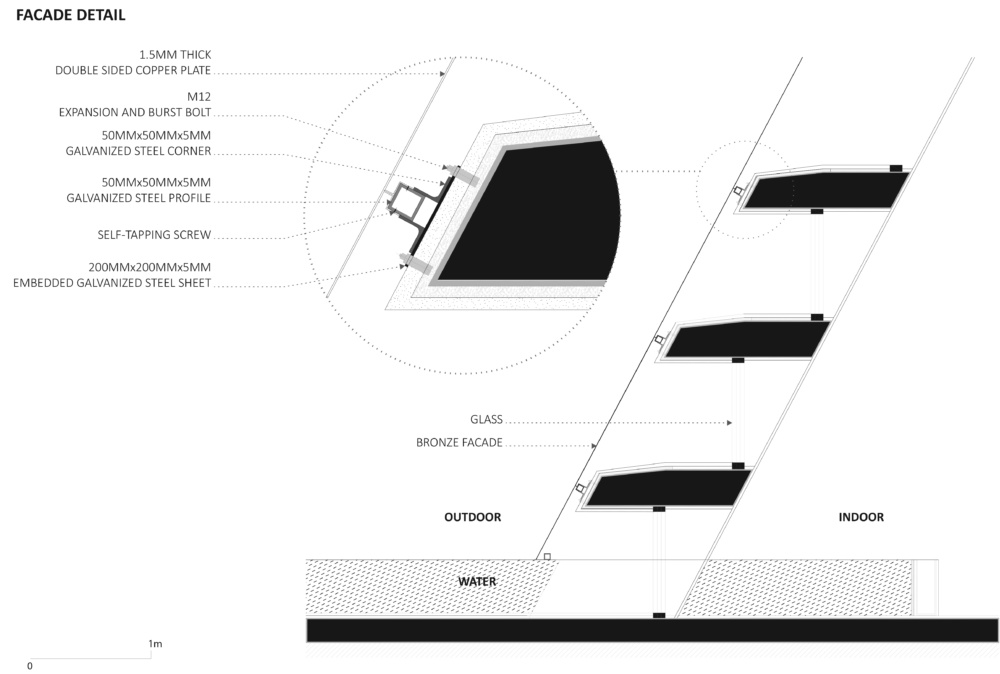 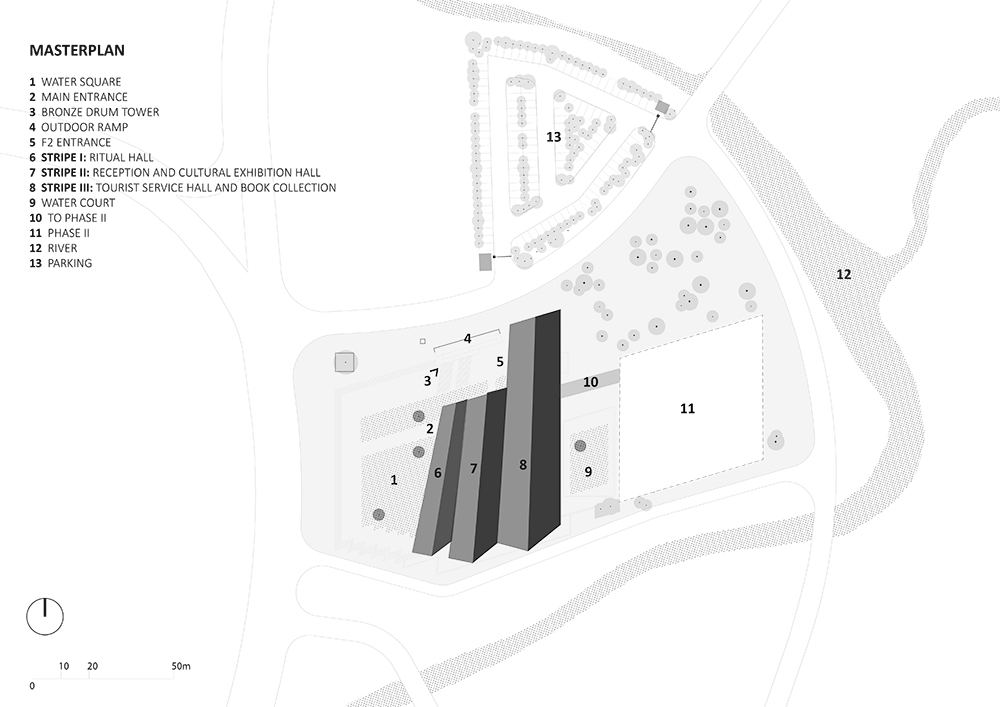 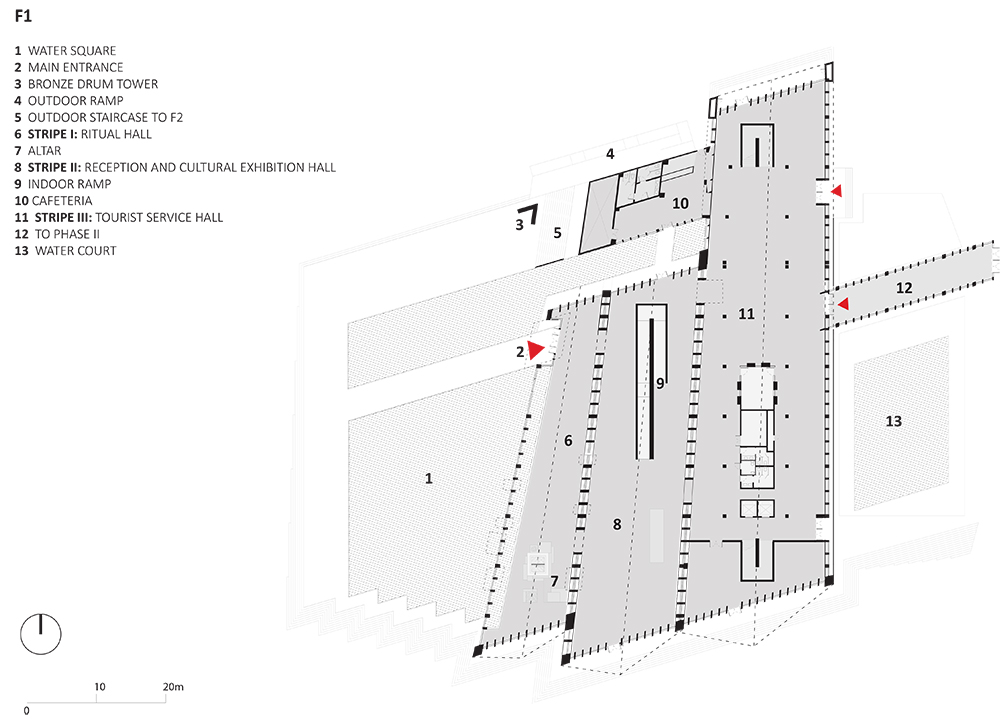 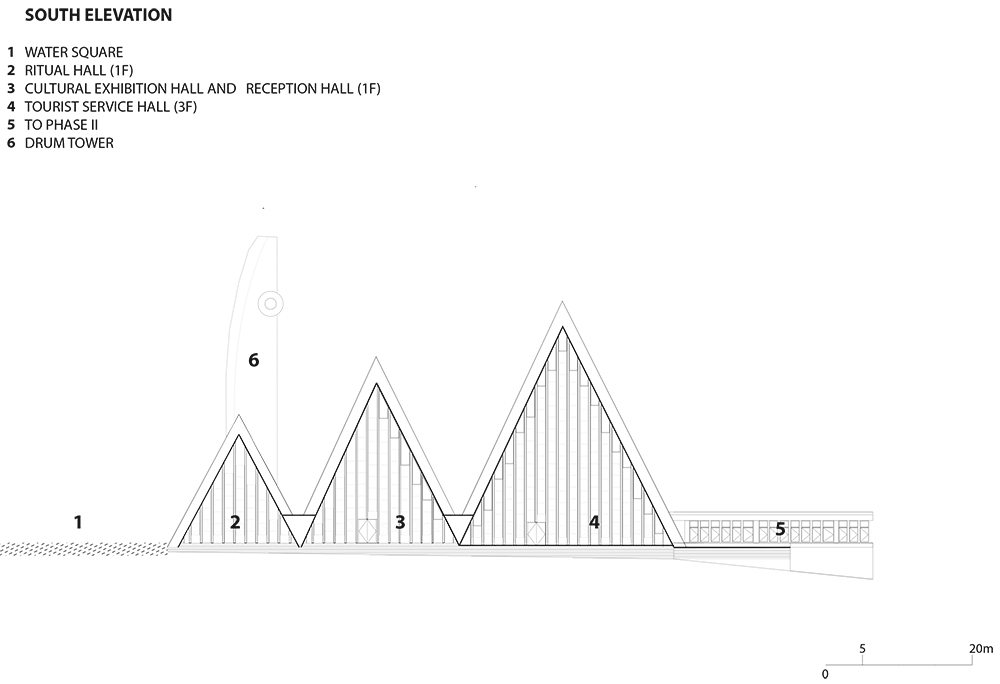 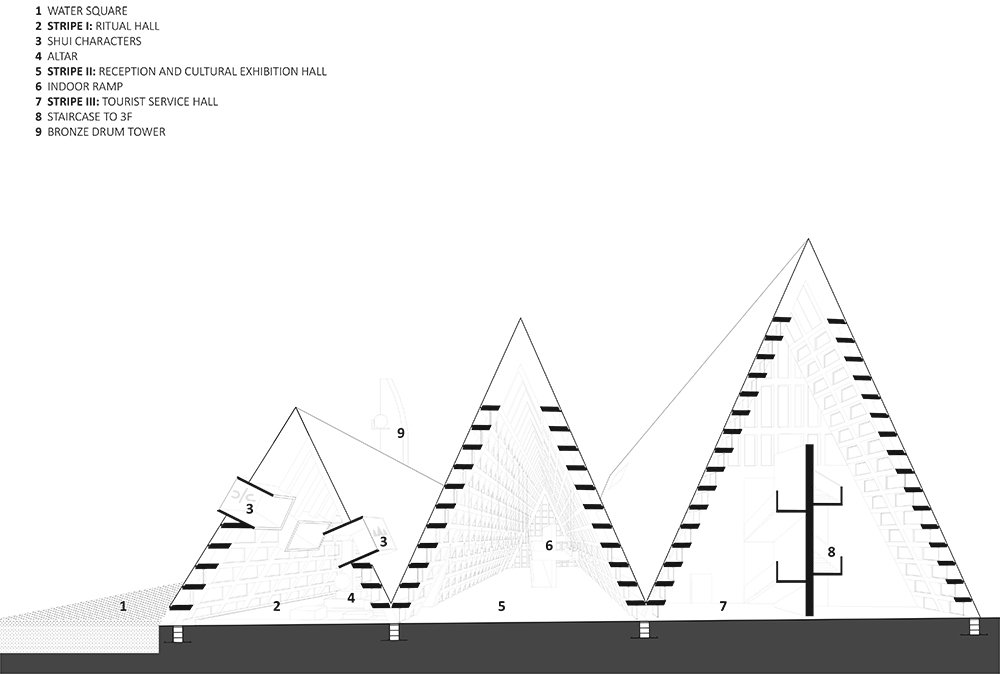 <
►
>
Each hall of the Shui Cultural Center is of a different scale, but a similar mass, and they all make use of the same ornamented panels and imprinted concrete. (Courtesy Jinsong Xie, Jinda Zheng, Zhili Yin, Hongsen Kang, Haibo Xie/West-Line Studio)

Opened to the public in December 2017, West-Line Studio’s Shui Cultural Center is an imposing complex located in a valley within China’s rugged Sandu Shui Autonomous County. The complex, consisting of three single-gabled halls and a monumental tower, is a formidable display of timber-pressed concrete covered in pitched copper plates.

The Shui people, concentrated in the county and the larger Guizhou province, are a distinct ethnic minority with a unique language and logographic writing system. For West-Line Studio, the project was an ambitious attempt to translate local customs into a cohesive design for a cultural center campus nearing 150,000 square feet.

Placed atop an expansive concrete podium, the halls are of varying size, height, and function. They are unified by relatively hidden wall openings and approximately 4,000 perforated copper cladding panels. Each half-inch-thick panel, measuring four by two feet, was subjected to a multi-stepped anodizing process to overcome corrosion in the acid rain–drenched province and to boost iridescence.

The perforations, numbering just under 50,000 in total, fulfill three functions. Structurally, gaps in the copper plate significantly reduce the dead load placed on cantilevered concrete trusses and the screen wall fastening system, composed of galvanized steel corners, sheets, and expansion-and-burst bolts. Aesthetically, the perforations create a patterned brise-soleil for the halls’ east and west elevations, filtering light through the narrow, rectangular glass panes that line the hall. Symbolically, the gaps are a nod to the Shui character for rain, which consists of tiered vertical bands.

The interiors of the complex, marked by exposed concrete structural systems, are imprinted by the surrounding landscape through the use of pine panel-formed concrete. Sandu, relatively isolated from the country’s principal economic centers, is known for its dense Huashan pine and Chinese fir forests. The concrete detail effectively softens what could be considered an ominous space, transforming them into grey, oversized versions of the region’s traditional timber vernacular forms.

The triple-glazed glass panels, produced 350 miles north in the megalopolis of Chongqing, largely insulate and guard the complex from the elements. However, West-Line Studio inserted two details that add color and symbolic depth to the cultural center. In the complex’s ritual hall, glass panels are dyed to resemble typical batik tapestry patterns, blanketing the concrete walls and flooring with ever-changing color. Additionally, box-like concrete appendages marked with traditional Shui logographic characters protrude from this same hall. With a glance of sunlight, the characters are beamed downward, further tying the symbolic and material.