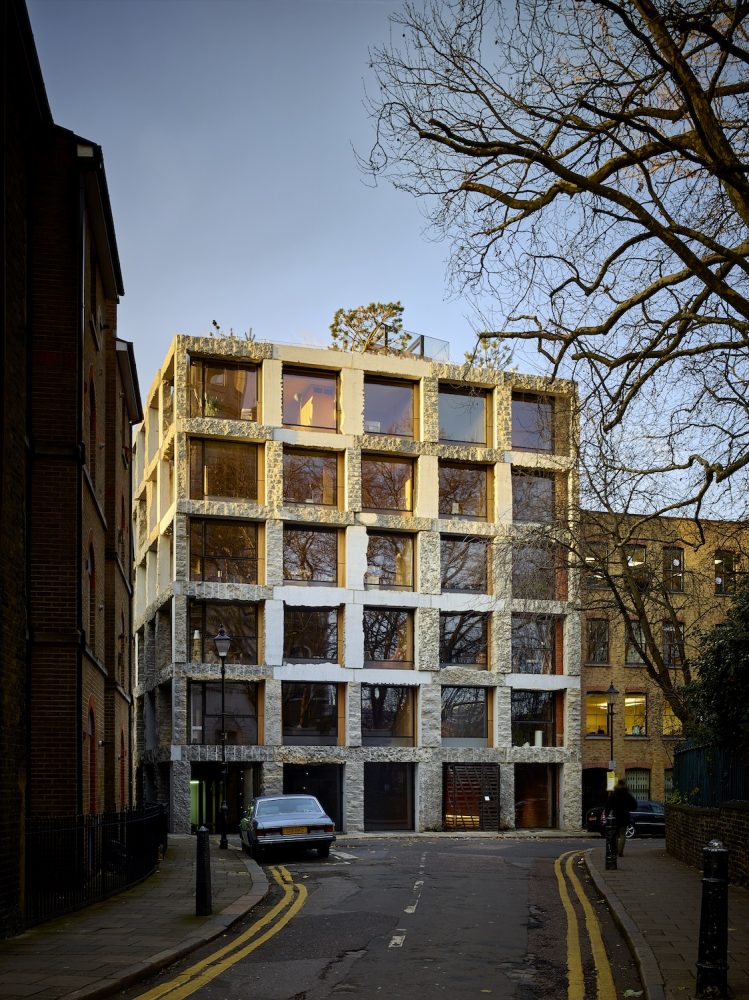 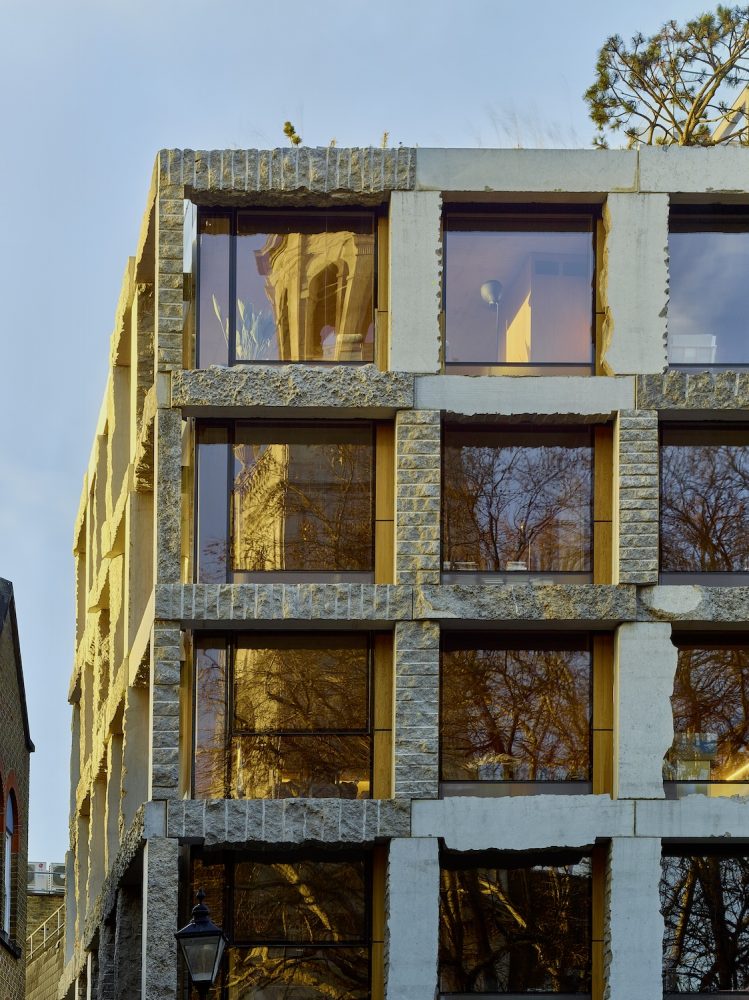 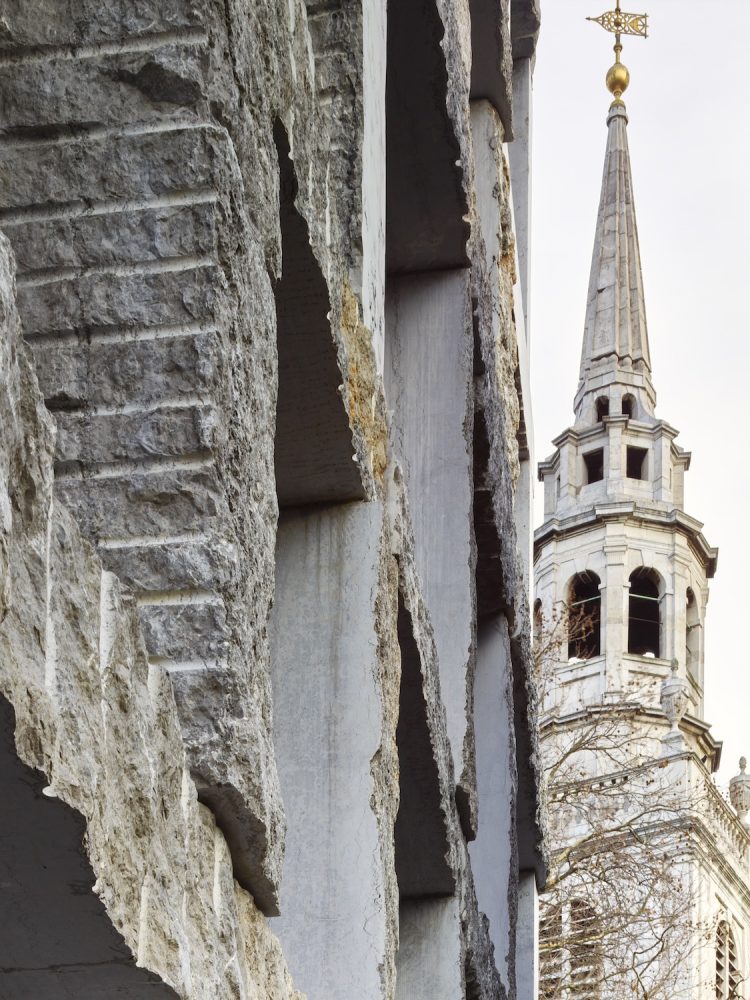 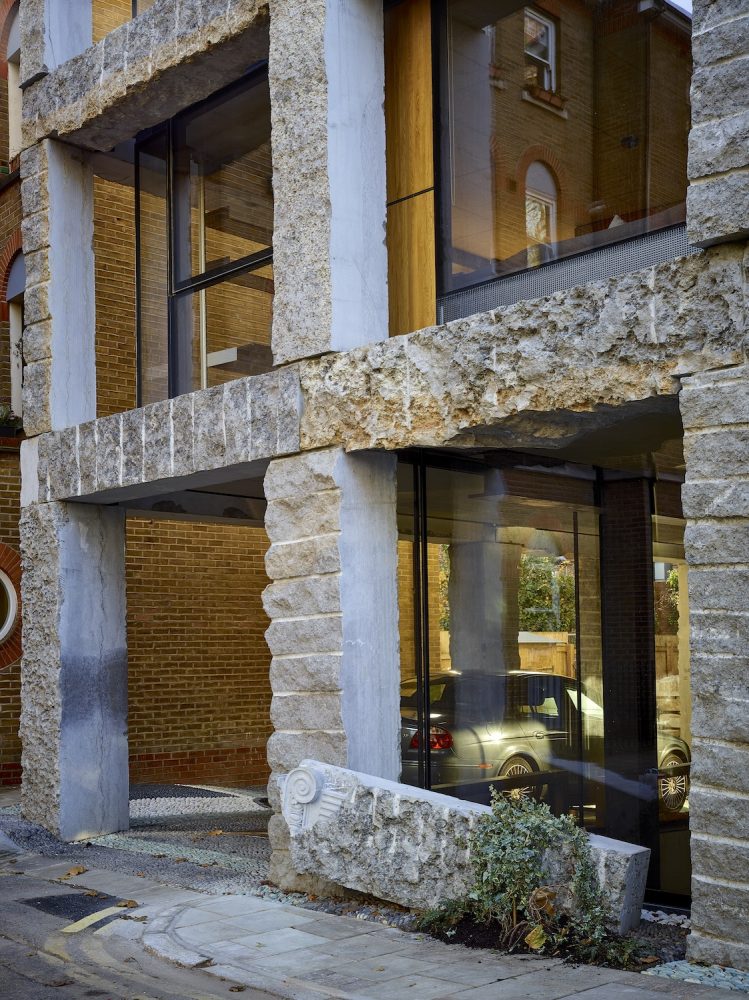 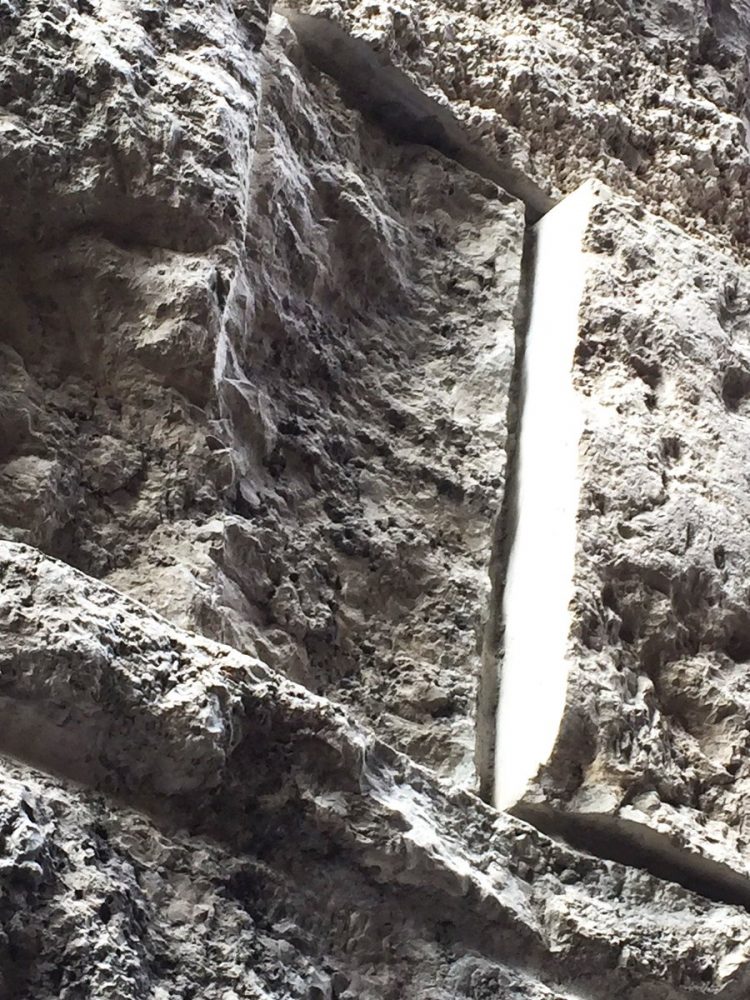 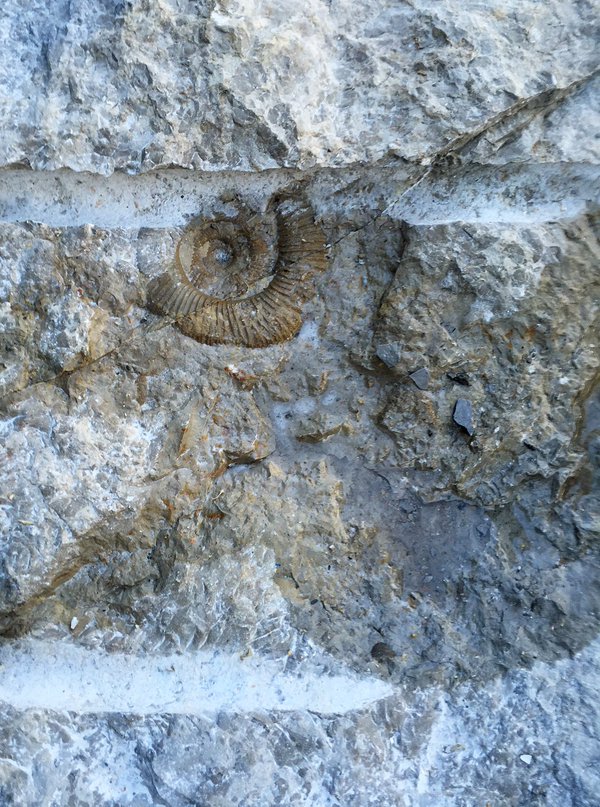 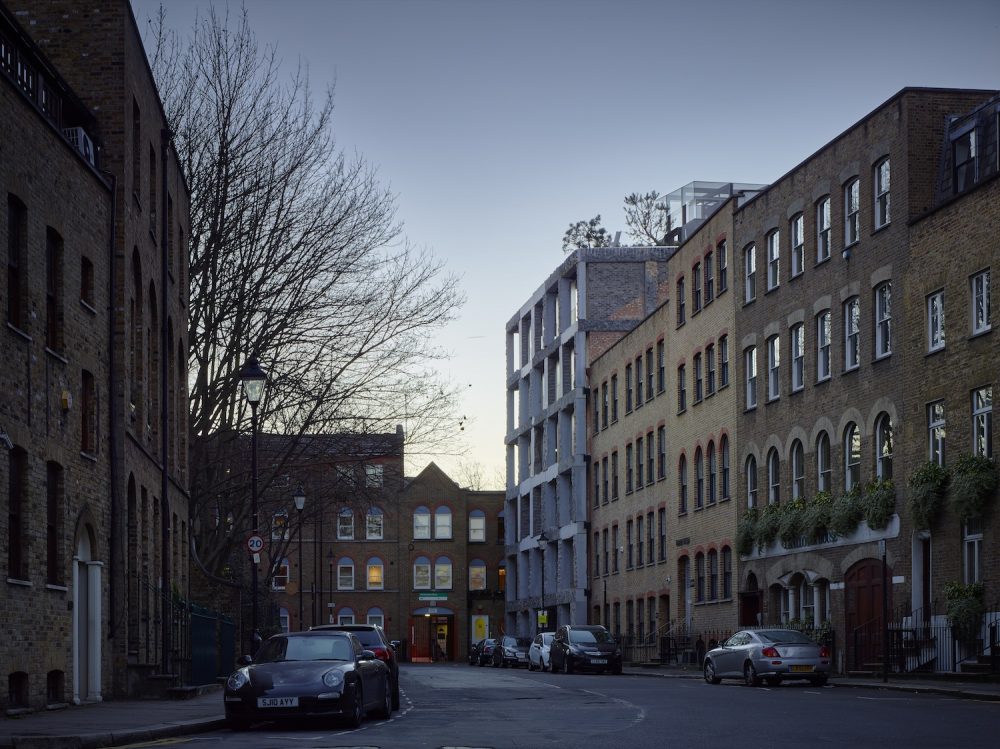 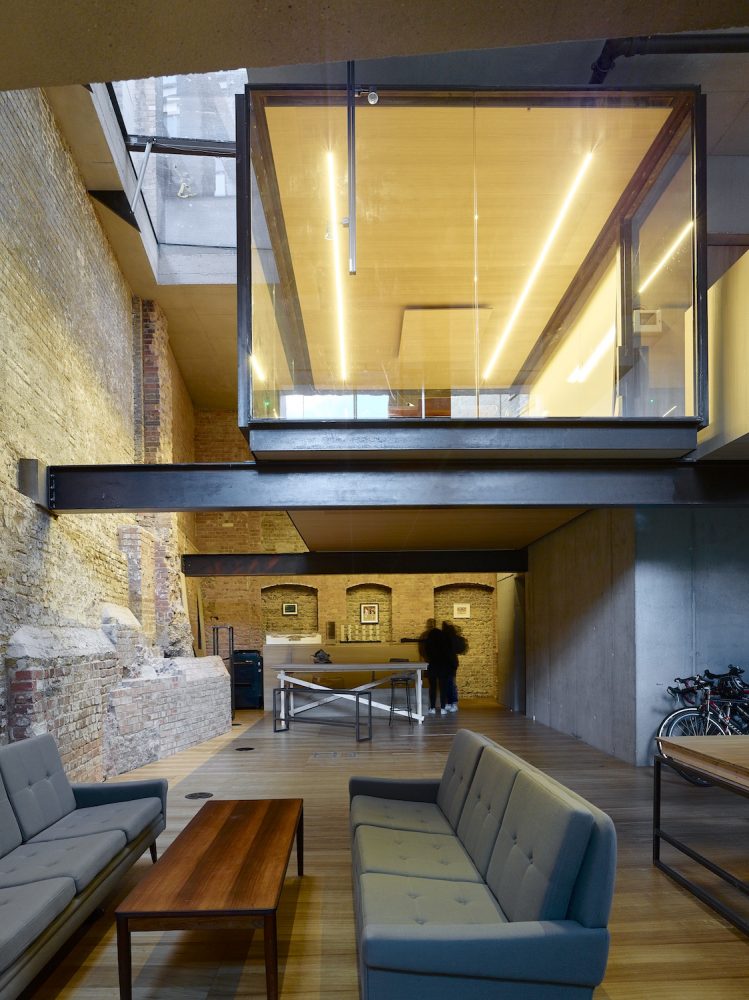 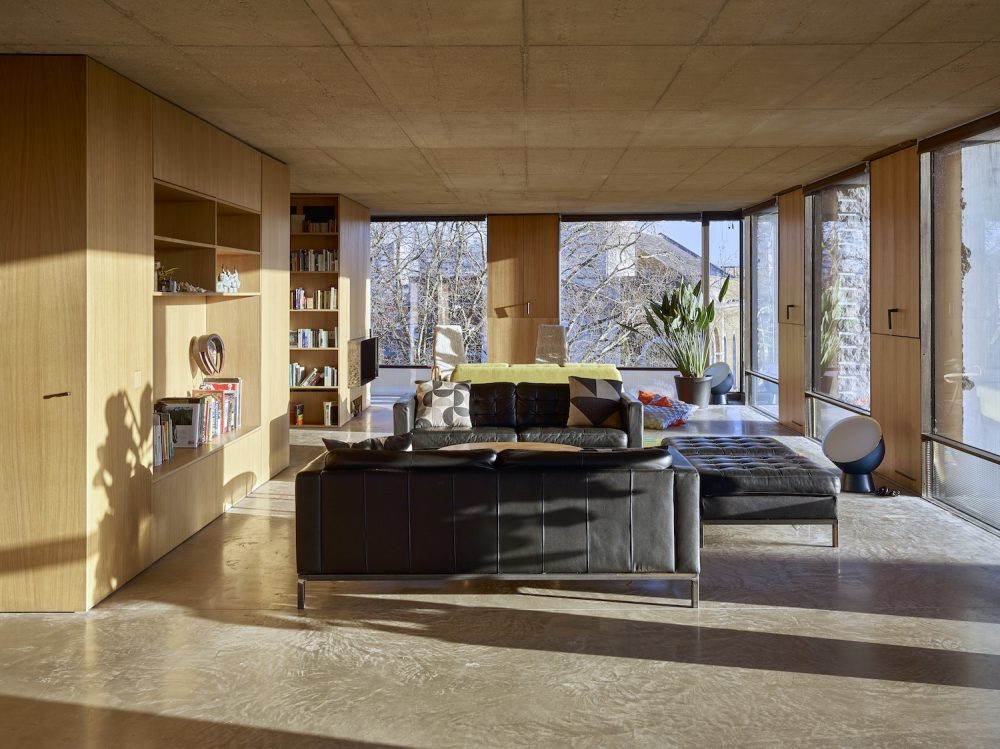 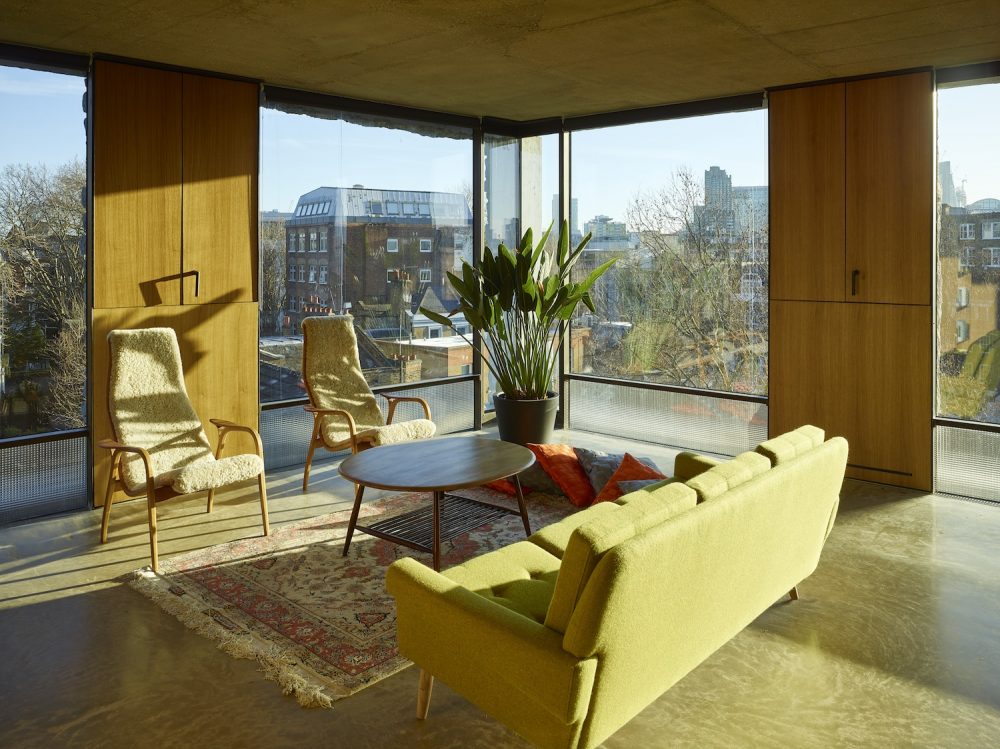 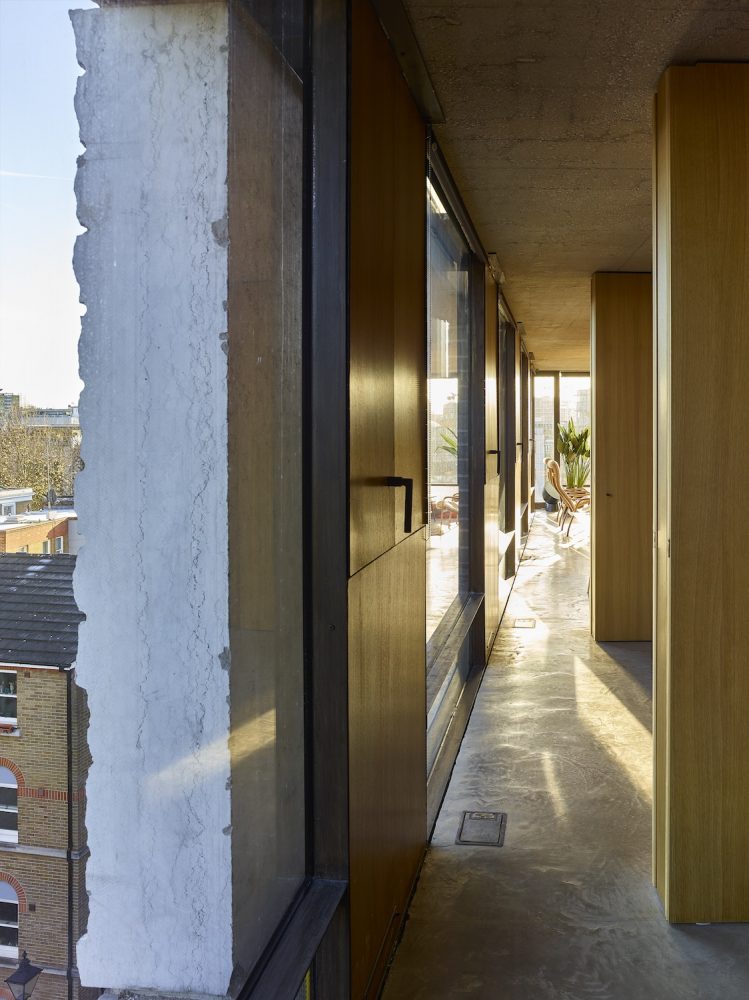 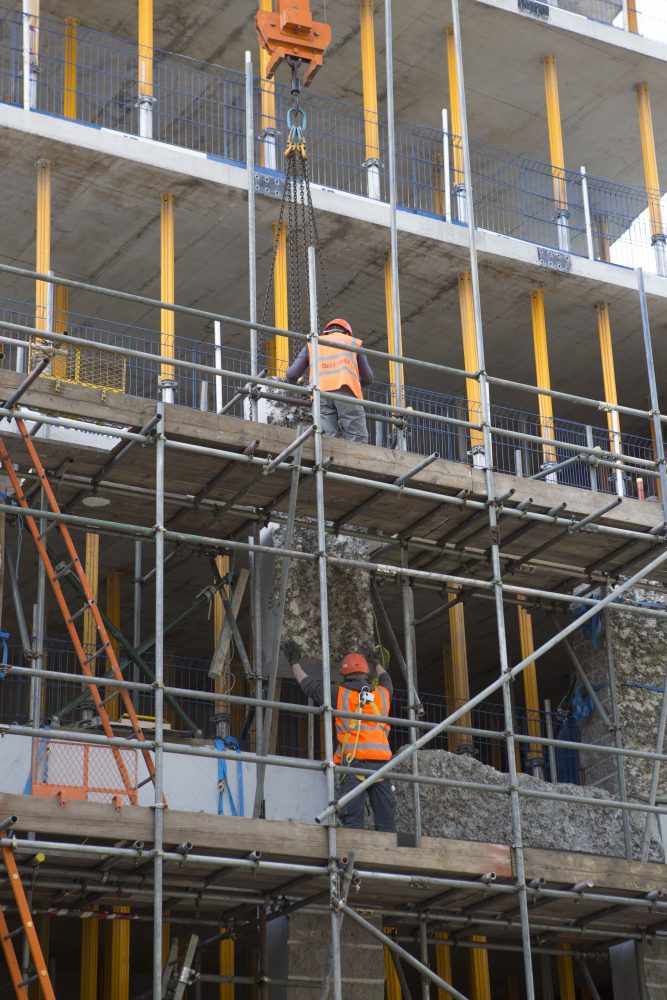 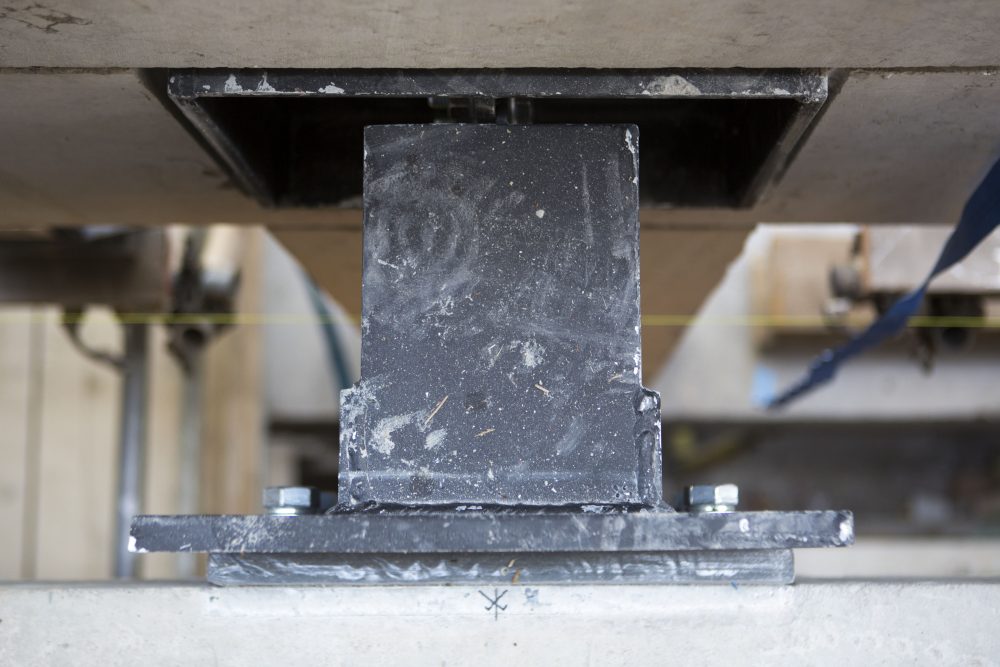 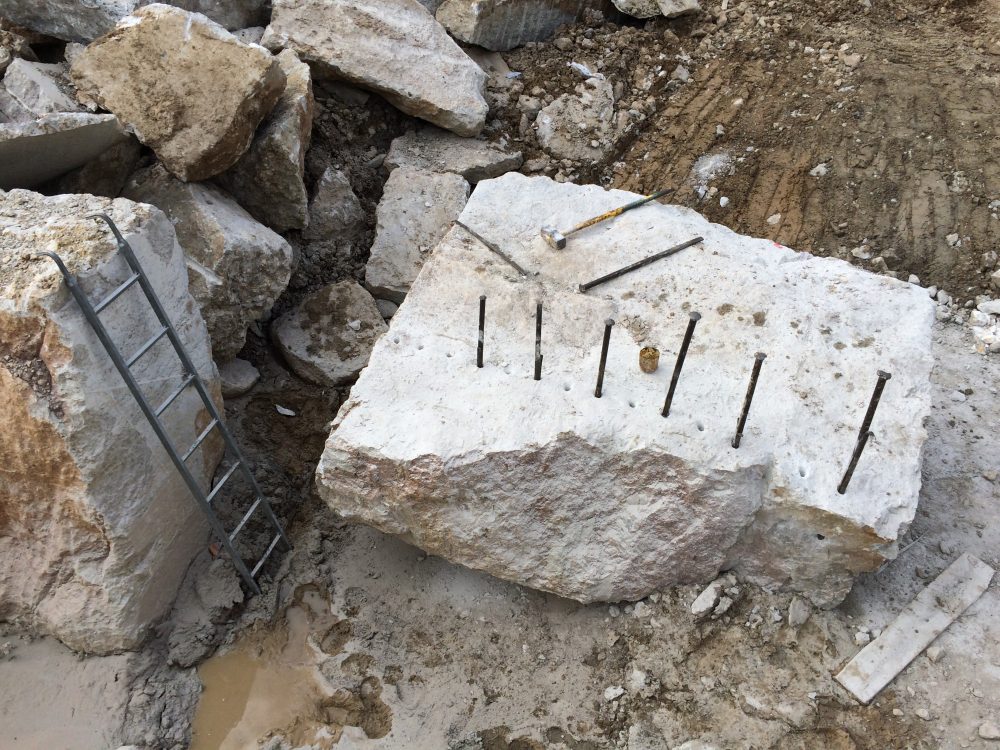 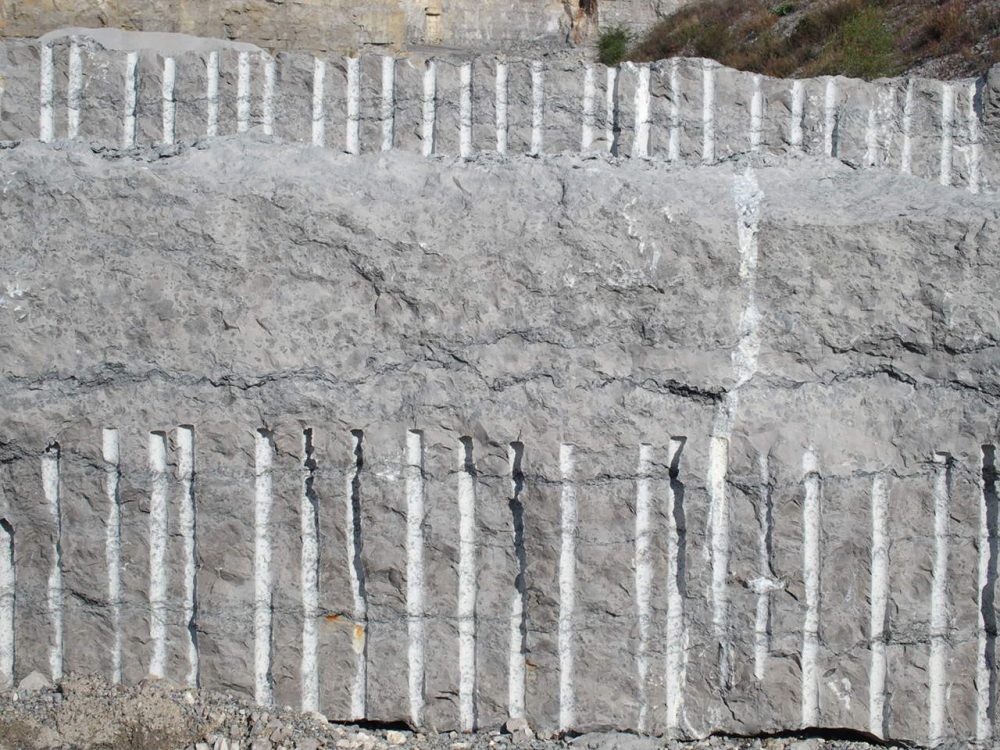 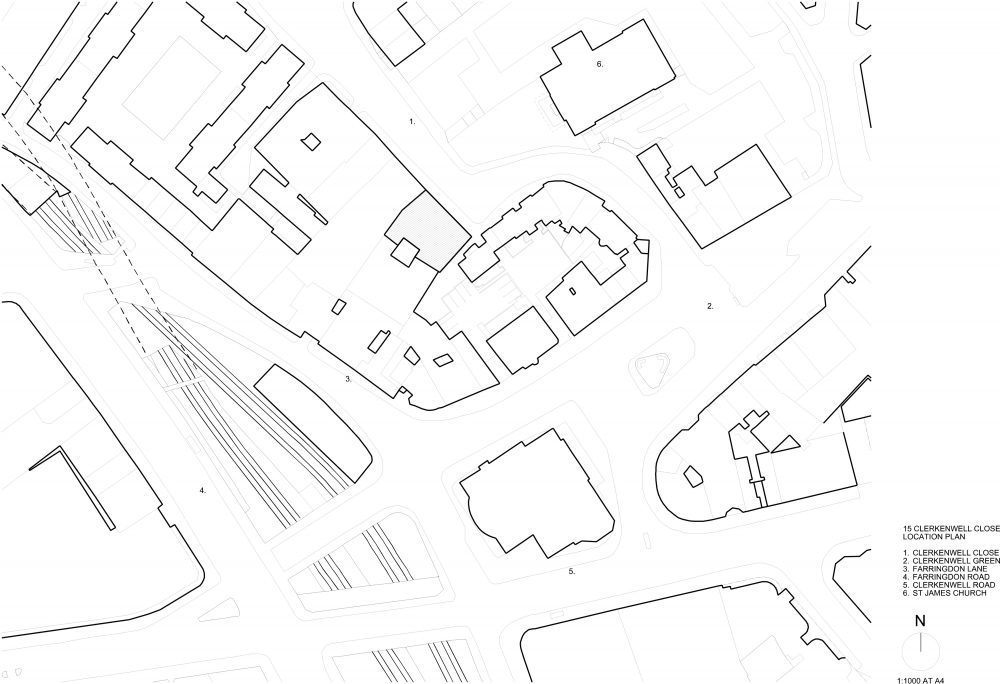 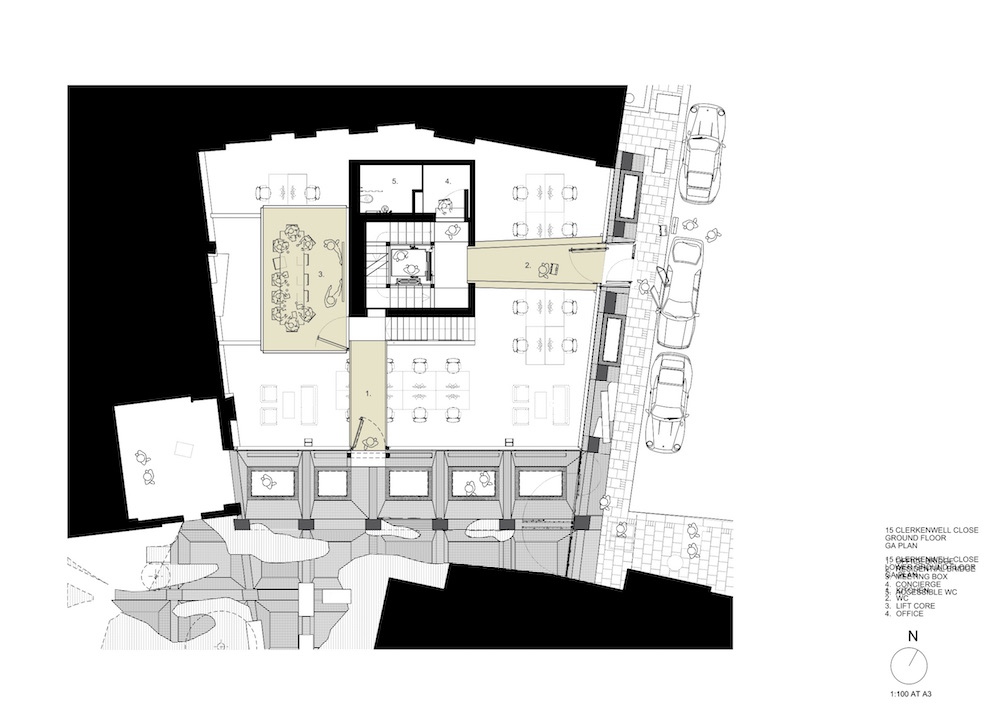 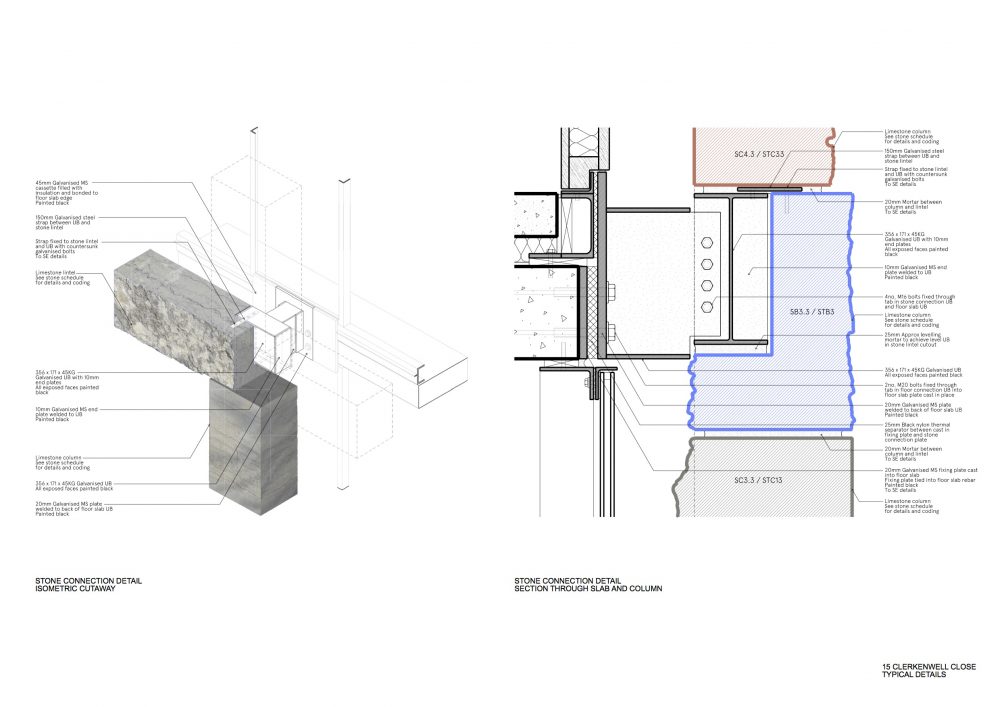 <
►
>
Stone components are connected through mortar and gravity while the concrete slabs are fastened with galvanized steel. (Courtesy Tim Soar/ATA)

In a time when stone is primarily used in facades as screen walls or purely decorative cladding, London’s 15 Clerkenwell Close by Groupwork + Amin Taha Architects (ATA) brings structure to the fore with a load-bearing masonry exoskeleton.

Since construction in November 2017, the mixed-use development, which is the home of Taha and his practice, has proved contentious between critics and local authorities. While the firm was awarded the 2017 RIBA Award, the Islington Council has ordered the architect to demolish the structure for a perceived incongruity with the surrounding historical context—albeit a significant portion of Islington’s architectural stock was built in the mid-20th century with half brick facades—a major complaint being the rustic quality of the limestone slabs.

To source the limestone facade, ATA went across the English Channel to a quarry outside of Lyons-la-Forêt in Northern France. According to Project Architect Dominic Kacinskas, “the region is noted for its continued use of strength certificates with a generations-old workforce well trained in extracting stone and splitting it accordingly.”

In contrast to historic and contemporary stone construction that is polished, chiseled, or hammered into a relatively smooth surface, the project’s columns and lintels are left in their semi-unfinished state. Striped indentations formed from the splitting process and fossilized remains track across the facade along with the smooth faces of bedding planes.

Columns and lintels, all roughly measuring 10 feet by 1.5 feet by 1.5 feet, are stacked atop each other in a six-story square grid. Each block is bonded to the next with just under an inch of mortar and gravitational force. In total, the limestone exoskeleton weighs just under 250 tons.

The reinforced concrete floor slabs, measuring nearly eight inches thick, are embedded with a series of steel plate casts that are bolted to external metal bosses through thermal isolator nylon plates. The metal bosses are in turn grouted into a system of galvanized steel I-beams placed at the meeting point of horizontal and vertical stone elements.

Groupwork + Amin Taha Architects were able to execute a continuous bespoke curtain wall inches behind the load-bearing masonry effectively disengaged from the structure through the use of pinpointed metal fastenings. Window openings, composed of double-glazed units with metal brass finished frames, follow the equal subdivision of the exterior’s stone structural grid. The design team placed solid oak timber panels where outward views are not permitted by the columns, which are grafted atop a solid oak sub-frame.

Along the side elevations of 15 Clerkenwell Close, the design team elected to keep intact the original red brick party walls abutting adjacent structures. This decision is most apparent on the northwest elevation where a new grid of limestone, and infill grey brick, is cut into the party wall to support the insertion of new floor and roof slabs.

Why the controversy? The Islington Council contends that Groupwork + Amin Taha Architects did not accurately display the finish of each stone component of the facade. According to the firm, the rough finish of the limestone, formed by millions of years of fossilized marine organisms, quartz pockets, and other sedimentary products, “is only discoverable weeks before installation on site as the stonemasons sub-divide the extracted stone into sizes set by the structural engineer.”

An appeal against the motion of demolition will occur in April 2019.