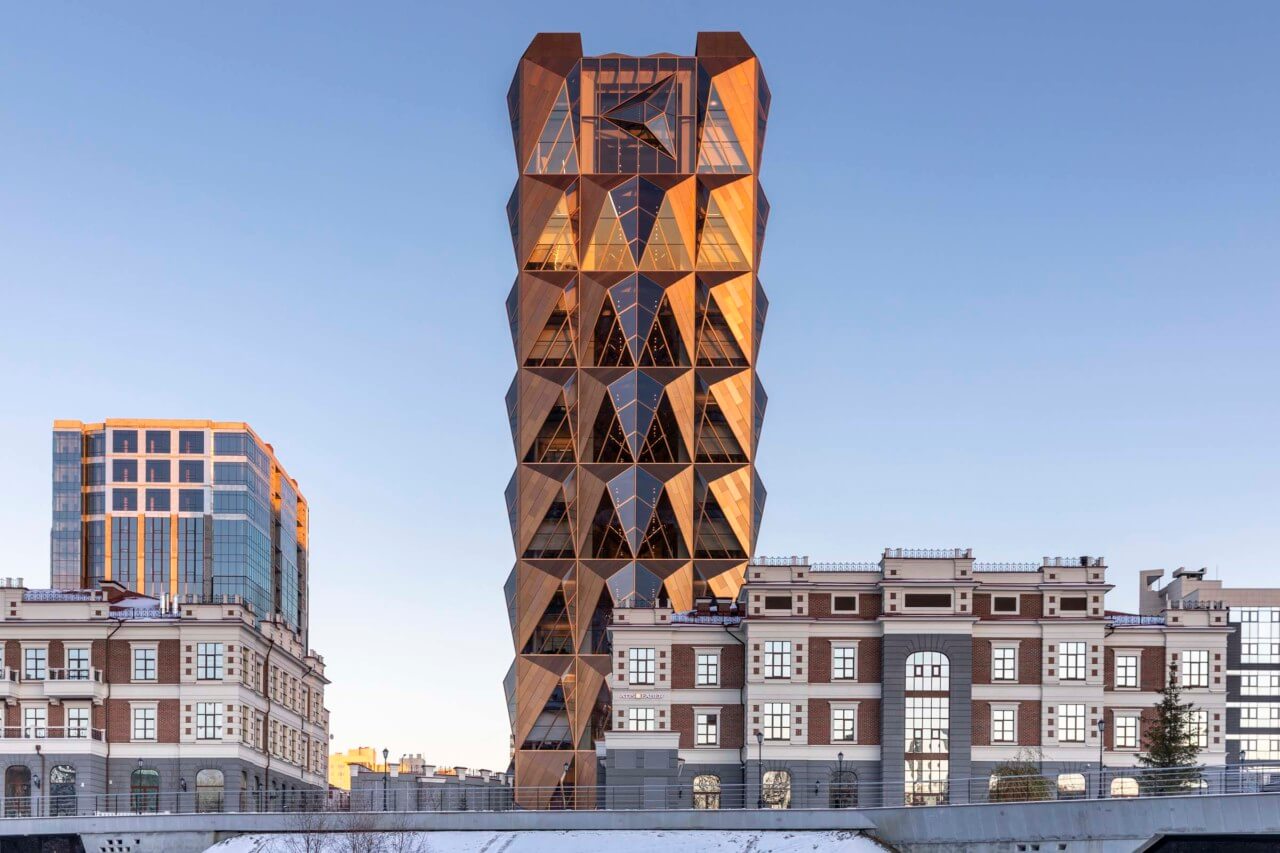 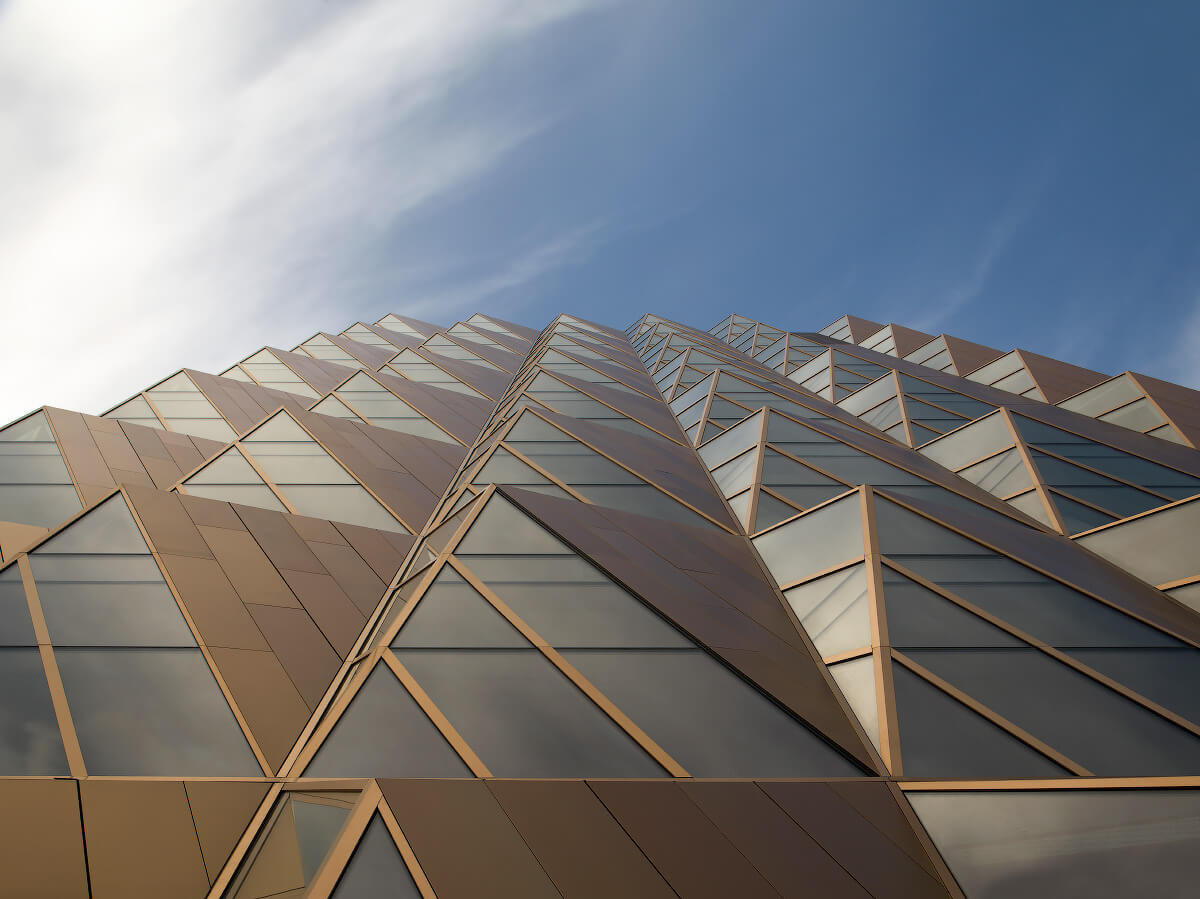 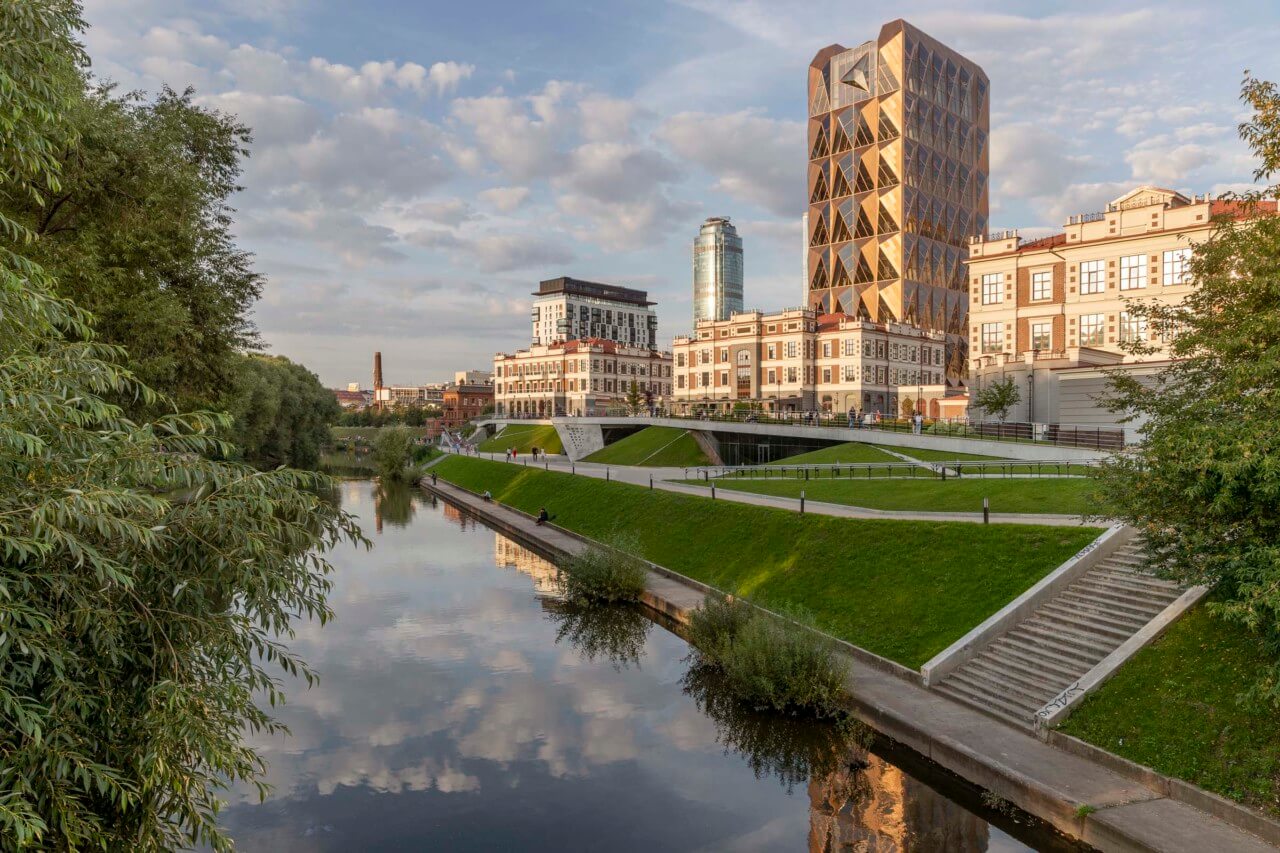 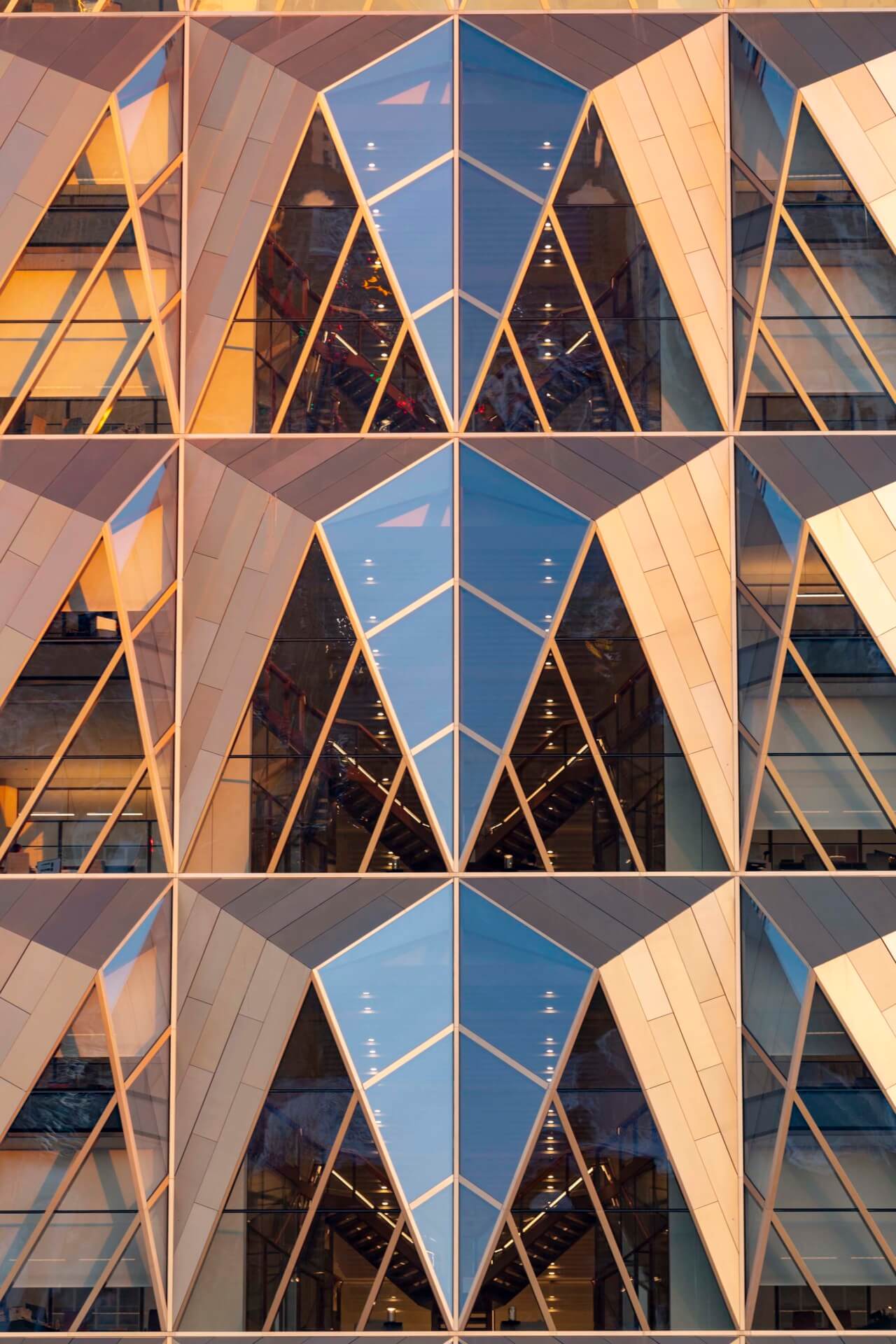 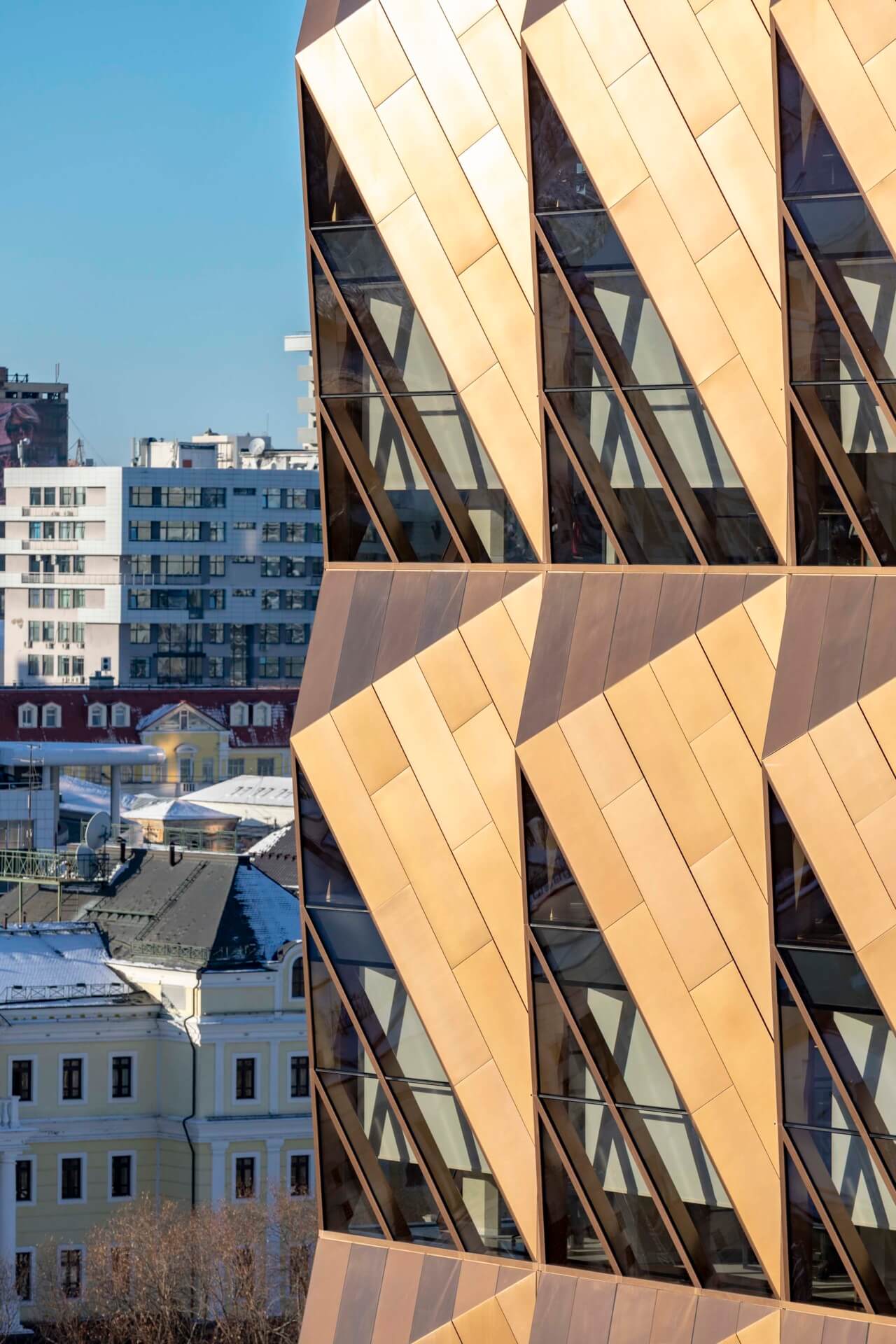 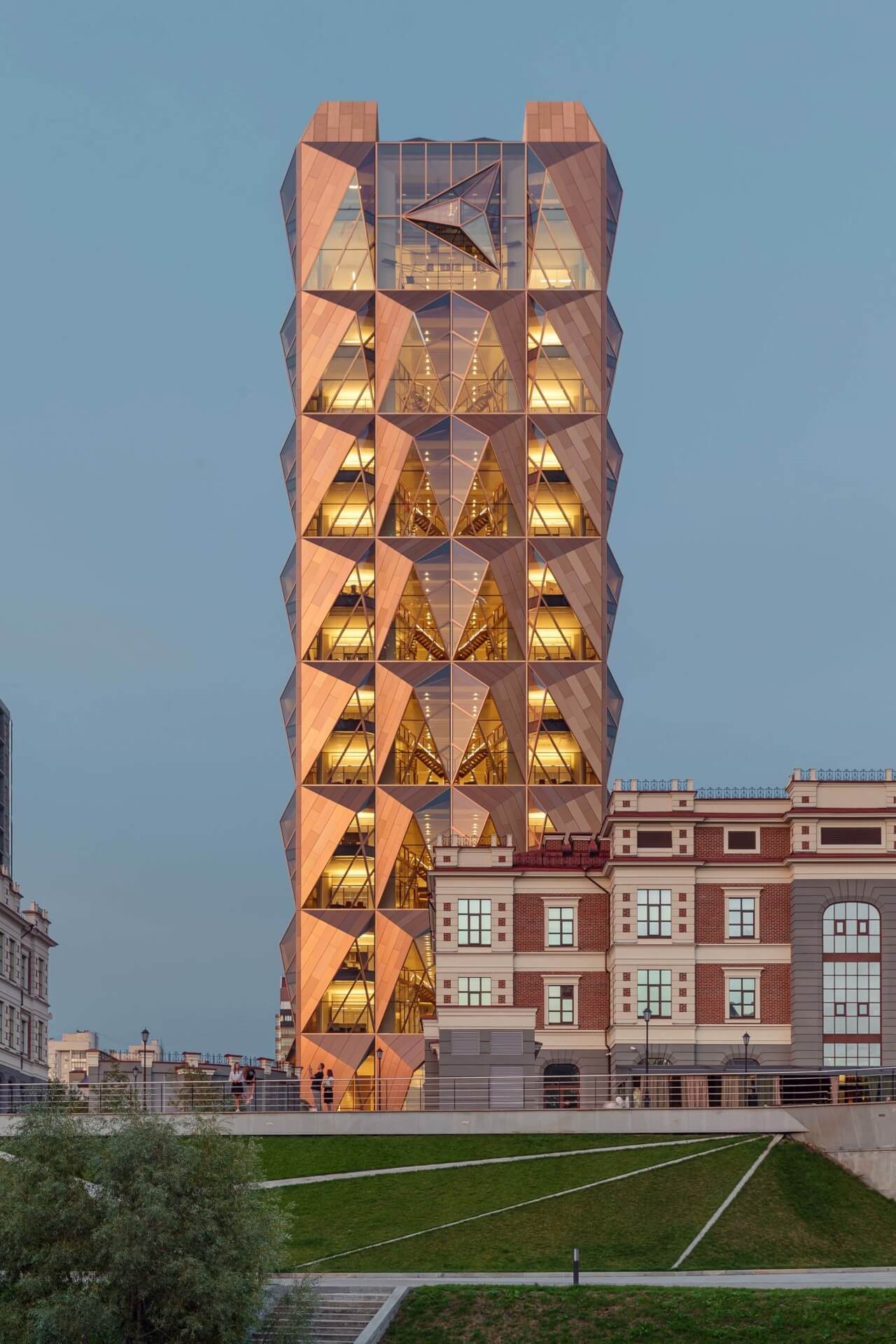 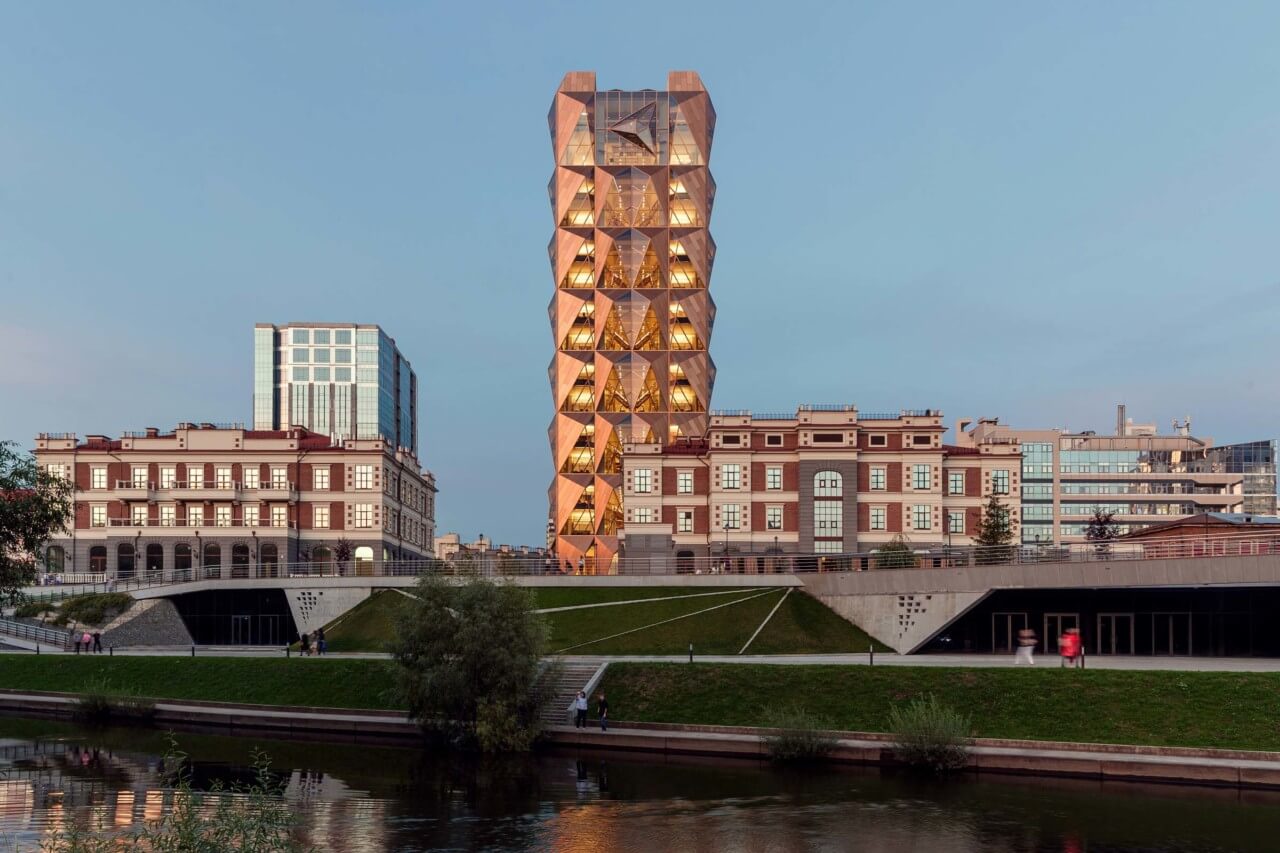 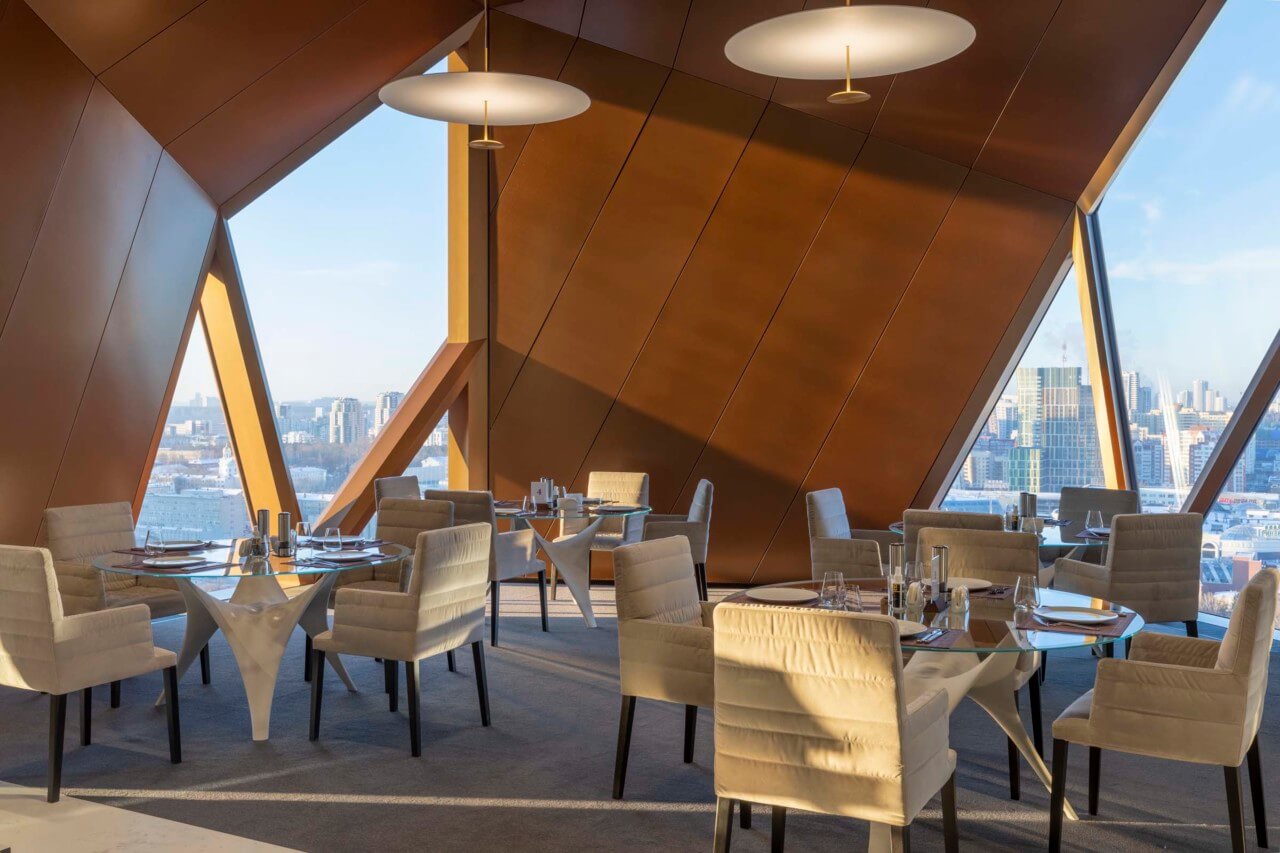 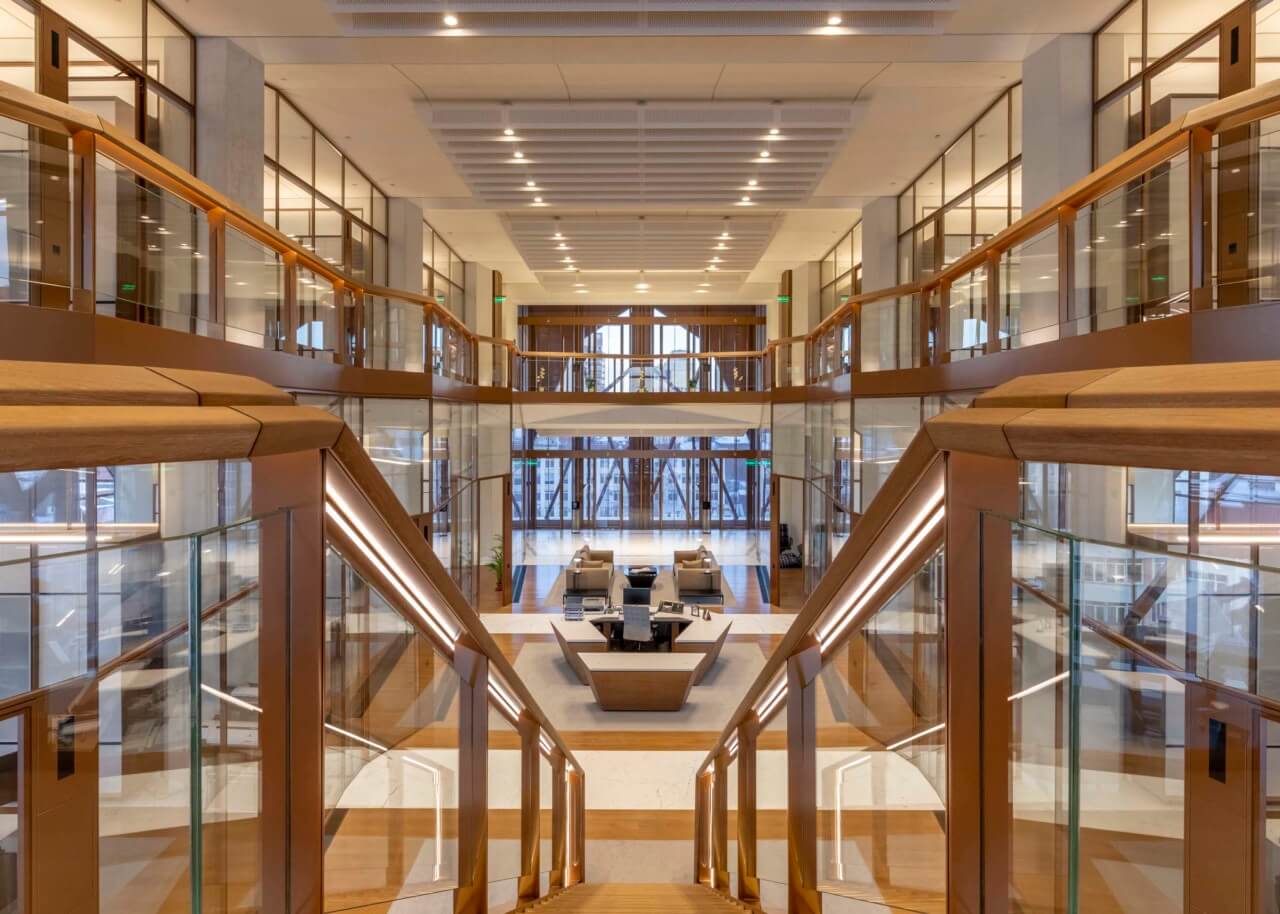 Foster + Partners has completed a shimmering new headquarters for the Russian Copper Company, one of the world’s largest mining companies. The warm brown exterior echoes the building’s symbolic nature while reimagining the conventional office from the inside. In the small city of Yekaterinburg, the 15-story office tower sits on the landscaped bank of the Iset River and is the studio’s first completed project in Russia.

The crystal composition of the facade is self-referential in more than just in color: the shape of the panels was directly inspired by the chemical structure of copper. A total of 160 modules, each weighing 8,500 tons, wrap the entire building. The majority are two-story, larger modules that are approximately 33-by-20 feet, while slightly taller ones (40 feet) wrap the double-height ground floor. A new, faceted RCC logo, a rebranding born directly from the architecture, was integrated within the glass panels at the crown of the building.

“The design of the facade is derived directly from the client’s specific ways of working,” said senior executive partner Luke Fox, “with the two-story elements reflecting the tightly integrated and human-scaled workspaces that repeat up the building. With this user-focused foundation, the design team then developed the facade into a visually rich, materially complex, and energy-efficient detailed design, in response to the unique context and climate of Ekaterinburg.”

Due to the challenging import restrictions in Russia, the fabrication and assembly of the facade had to be carried out locally. The design team worked closely with the bespoke factory MirrorInox to exemplify the practice’s commitment to both technical innovation and energy efficiency. Using specialized 3D plasma cutters and robotic arms, the complex geometrical junctions of the stainless steel frame were welded to a tolerance of one micron per foot. German-based Pohl Group supplied the stainless steel with a PVD coating which accounts for the bronze effect.

Several mock-ups were built by cladding consultant Priedemann to test air and water tightness, fire rating, and acoustic properties. These mock-ups were prefabricated in a purpose-built factory in Russia before being shipped to Bielefeld, Germany. Additionally, the prefabricated mockups were affixed to a sealed chamber for the rigorous evaluation of dramatic warping and deflections caused by pressure changes.

The triangular facade combines solid and glazed surfaces to carefully consider the wide-ranging climate of Ekaterinburg’s seasons. The glazing throughout and skylights at the top floor mitigate heat while allowing as much natural light as possible into the offices. The design targets a BREEAM Excellent rating and was completed in April of this year.

Highlighting the studio’s attention to detail from the engineering to the design, Jeremy Kim, partner at Foster + Partners, added, “Everything from the building structure to the bespoke furniture was designed specifically for the company, illustrating our commitment to craftsmanship.”