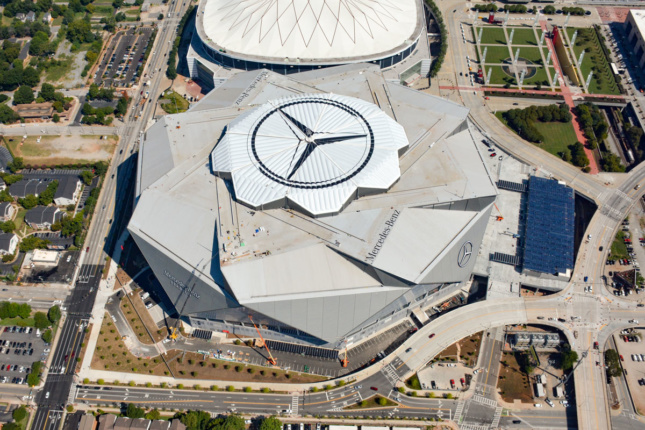 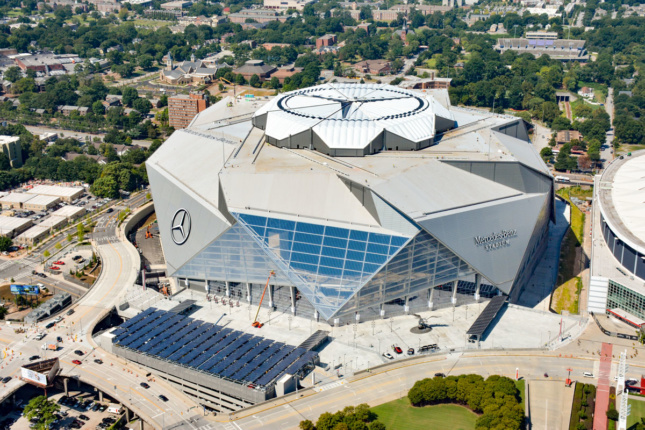 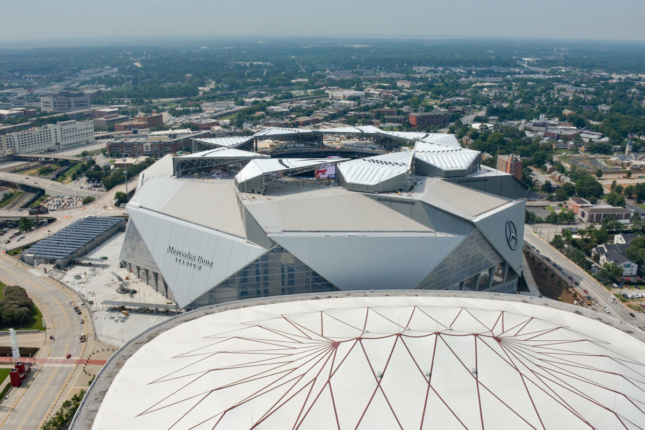 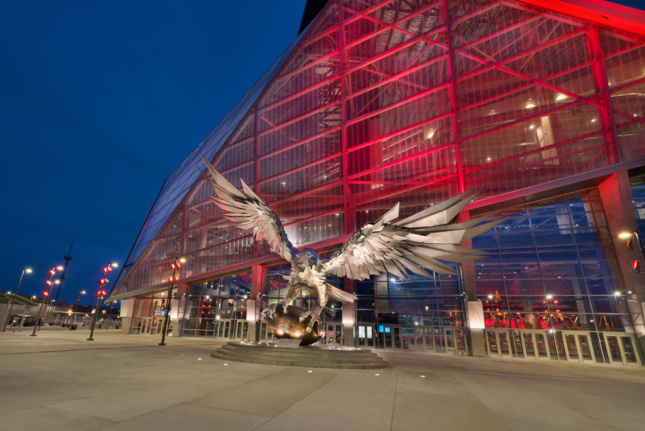 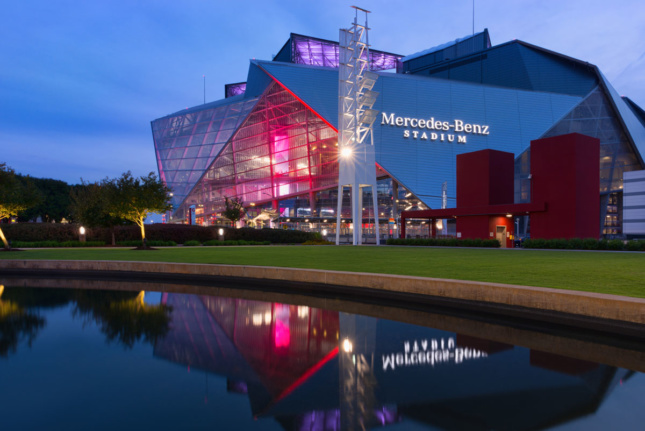 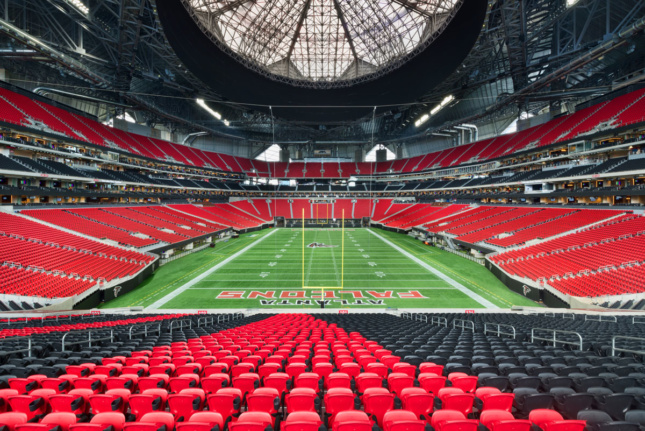 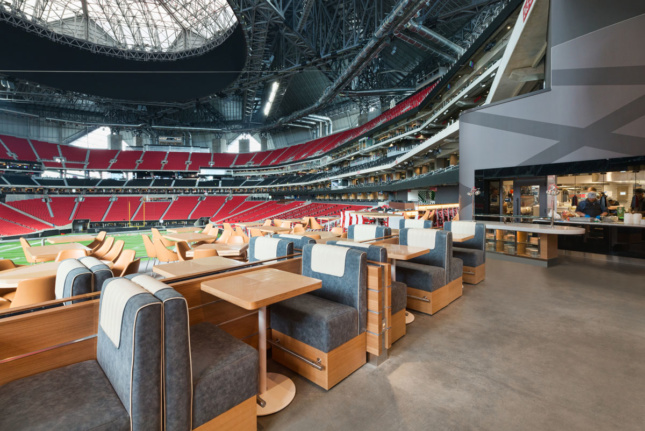 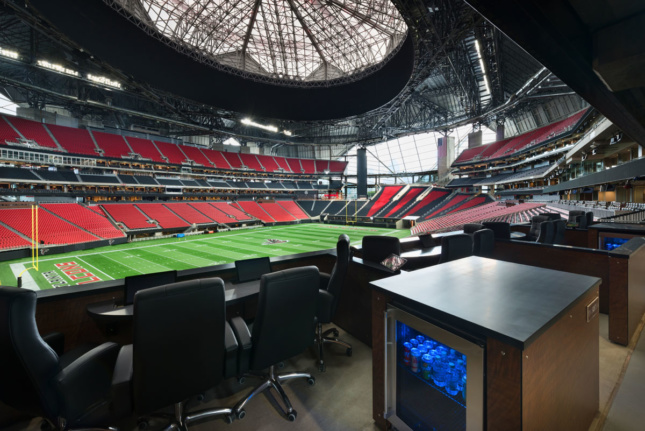 Among other industry-leading features, Mercedes-Benz Stadium is notable for its kinetic roof structure. While other stadiums with retractable roofs must allocate additional land for the entire roof assembly to open horizontally off the stadium, Mercedes-Benz Stadium offers an innovative space-saving solution by breaking down the geometry of the roof into eight triangular petals which retract in a radial fashion. The petals are composed of three layers of ethylene tetrafluoroethylene (ETFE) membrane fabricated into air-inflated “pillows” involving more than 143,000 square feet of membrane. The lightweight material was selected for its durability and translucency. Each petal cantilevers approximately 200 feet inwards towards the center of the stadium on 16 secondary trusses which spring from four 720-feet-long primary steel trusses. This primary steel frame spans to concrete “mega-columns.” Nested within the steel framing of the oculus is the world’s largest media wall, an immersive six-foot-tall, 360-degree HD display covering over 63,000 square feet. Unrolled, the video board would stretch three football fields long.

HOK worked with an integrated team of engineers from the start, coordinating information with a robust digital toolset that included digital modeling software. Custom algorithms and parametric modeling tools integrated the stadium’s complex geometrical layout with tens of thousands of pieces of information about the roof structure and its behavior and movement during various load scenarios. The project ultimately generated over 18,000 sheets of steel shop drawings, and during peak fabrication involved 32 factories in the U.S. and Canada making and delivering steel pieces simultaneously.

The facade of the project is composed of insulated metal panels and a transparent ETFE facade, which has been marketed as a “window to the city” offering seamless visual connection to the surrounding context. ETFE in the wall assembly was fritted in a range of coverage from 20 percent to 70 percent in response to solar orientation. The composition of the angular wing-like wall panels abstractly reference the stadium’s National Football League team, the Atlanta Falcons.

Beyond the Falcons, the stadium flexibly hosts Major League Soccer franchise, and is expandable for major events that the Georgia Dome used to host–Super Bowls, NCAA Final Four Basketball tournaments, FIFA World Cup matches, and major concerts and performances. To accomodate geometric differences between a soccer pitch and football field, lower level seats are retractable and an automated curtain system attached to the roof structure comes down to bring soccer fans close to the pitch.

Gus Drosos, technical principal of HOK’s Kansas City office, said the consistency of the attachments of the ETFE system throughout the project and detailing of complex corners were specific successes of the building envelope design that offered valuable insight into working with ETFE and might carry over into future ETFE projects.

Additional insight into the design and construction of Mercedes Benz Stadium will be offered at the upcoming Facades+ Atlanta, where a panel of architects from HOK, EcoWorks Studio, and tvsdesign will deliver presentations in a session titled, “Designing MBS: Secrets of the Mercedes Benz Stadium.”