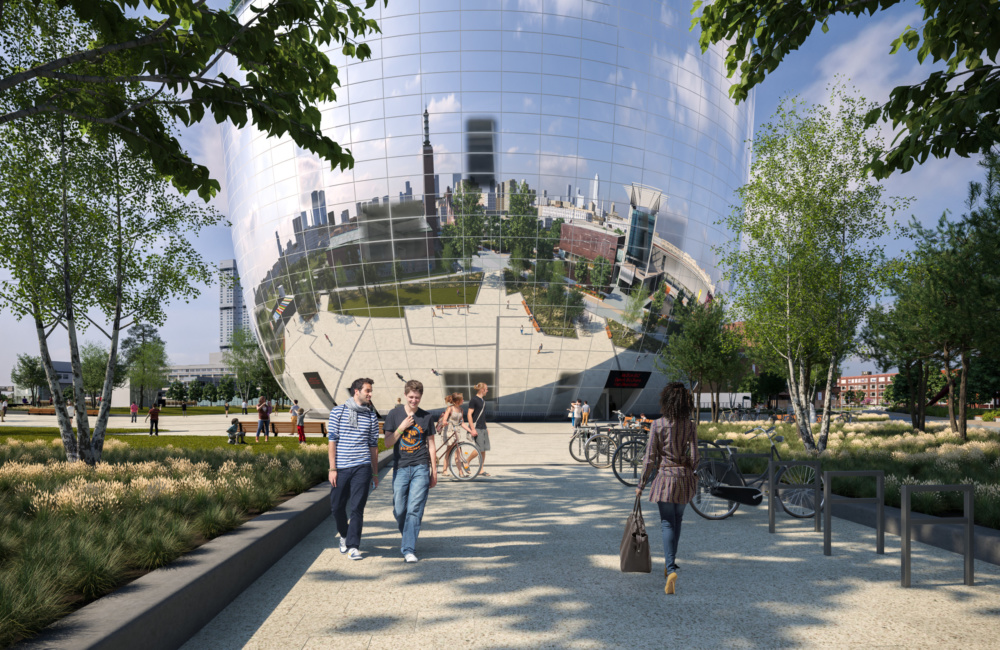 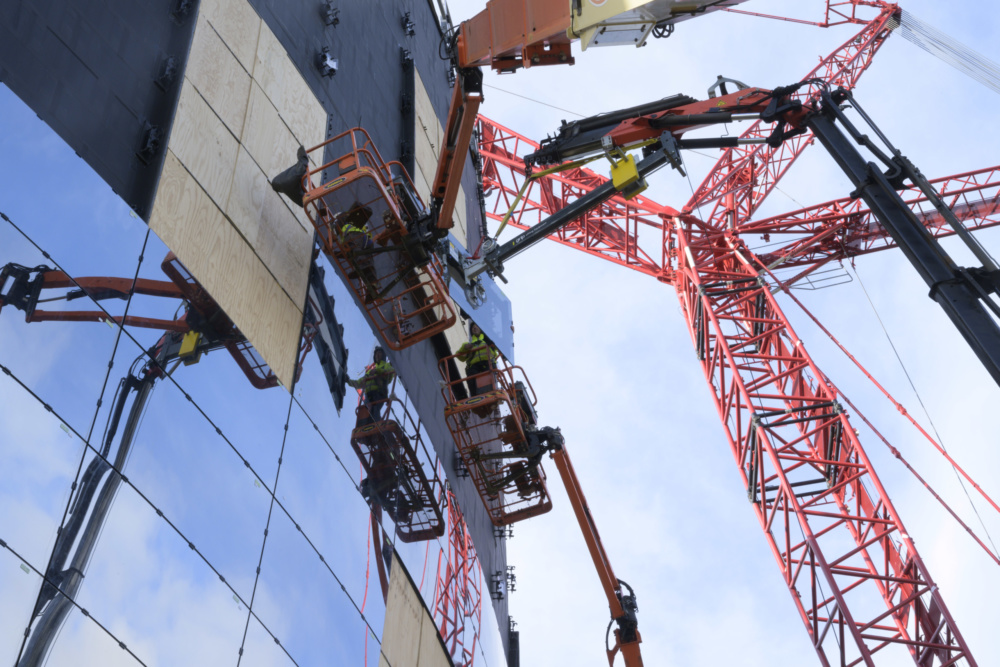 <
►
>
The project is located in Rotterdam's Museumpark and functions as a publicly accessible addition to The Museum Boijmans Van Beuningen. (Courtesy MVRDV)

The Museum Boijmans Van Beuningen (MBVB), located in Rotterdam’s 10-acre Museumpark, is receiving a striking new addition designed by MVRDV. Depot will house up to 125,000 of the museum’s artworks not currently used for exhibitions, with over 70,000 of the pieces being made accessible to the public in a semi-curated format. In response to the site and the functional requirements of the project, Depot’s spherical concrete shell has been clad with over 1,500 curved mirrored glass panels.

For MVRDV, the location of the seven-story archive drove the decision to use mirror glass for the facade. “The project is situated in a piece of parkland between many cultural and medical institutions, so we did not want to turn our back to any of the neighbors, we wanted to visually enlarge the park,” said MVRDV associate architect Arjen Ketting. “A piece of the park has been sacrificed to make space for this building, we visually reintroduce the setting in the facade.” This effect is maximized by Depot’s circular massing which allows passing pedestrian to see around the corner of the structure towards the park’s greater landscape.

Depot broke ground in 2017 and rises from an approximately 22,000-square-foot concrete foundation that supports a seven-story, poured concrete sphere that cantilevers over 30 feet in every direction. At its thickest, the sphere is one-and-a-half-feet in section—a built-in anti-burglary measure—and is punctured by just a handful of window openings to prevent sunlight from reaching the interior. Brackets were anchored into the structure during the concrete pour, and are further supplemented by a secondary network of small black frames; Rotterdam’s municipal code requires secondary safety measures for facade cladding.

Installation of the mirrored panels began in April 2019 and are arranged into 26 horizontal layers consisting of 64 identical panels, with each layer conforming to the curvature of the concrete shell. Prior to fabrication, the design team digitally unfolded the sphere’s surface into a two-dimensional format inlaid with the cutting pattern, which was in turn exported to the manufacturer. Each panel consists of two layers of glass separated by multiple layers of reflective foils, which were curved together during the fabrication process. A layer of insulation produced by Kingspan backs the panels and facade installer Sorba incised the membrane using a 3D model of the supporting brackets to reduce thermal bridging.

Although the bulk of the mirrored panels are subject to the same treatment, there are certain segments that correspond to nearby structures. For example, a significant block of the eastern elevation is composed of a less reflective coating to guard the privacy of patients found at the adjacent Erasmus Medical Center. Additionally, mirrored glass panels abutting windows are treated to transition to those transparent moments.

The project is expected to be completed in Spring 2020 and will open in 2021.