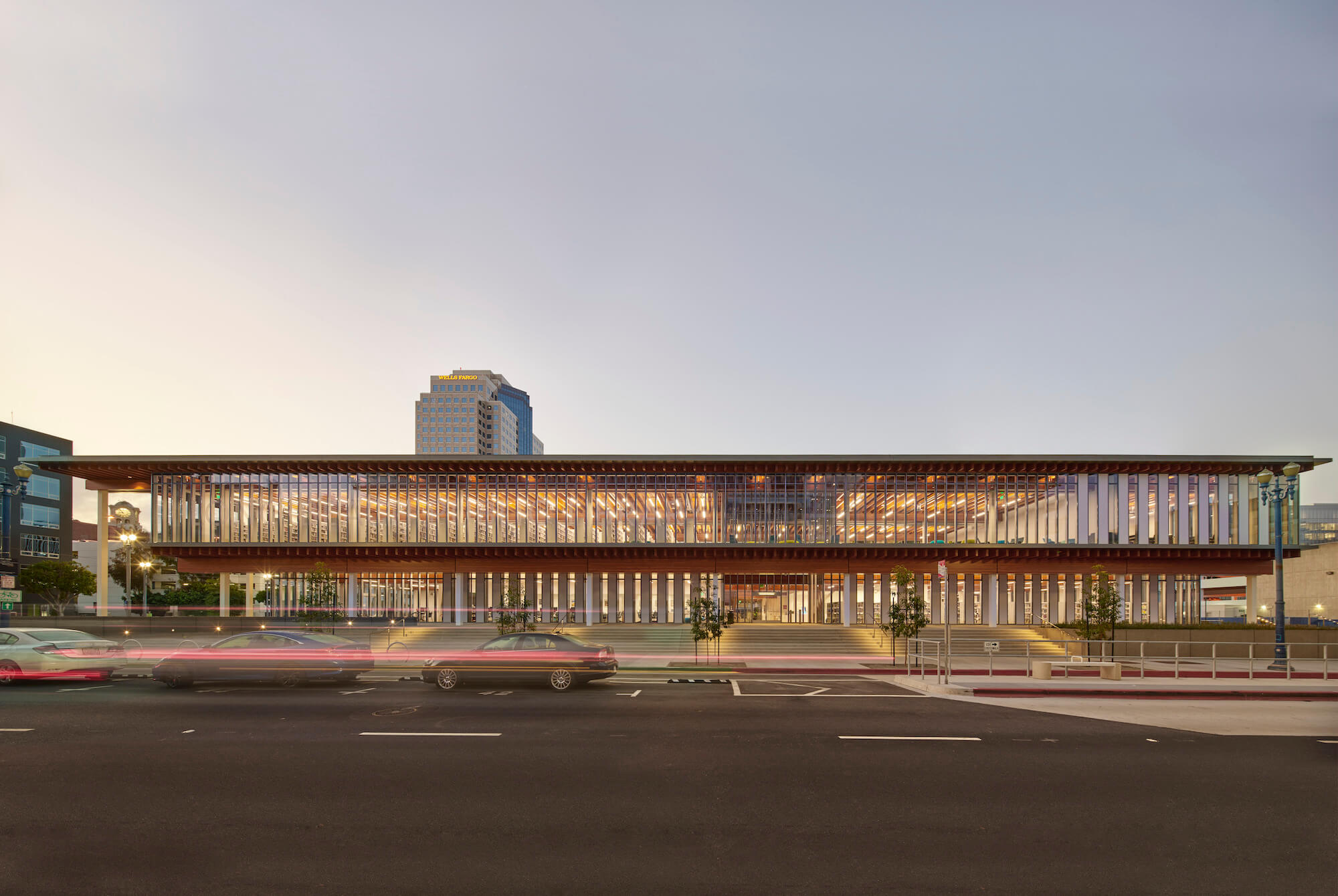 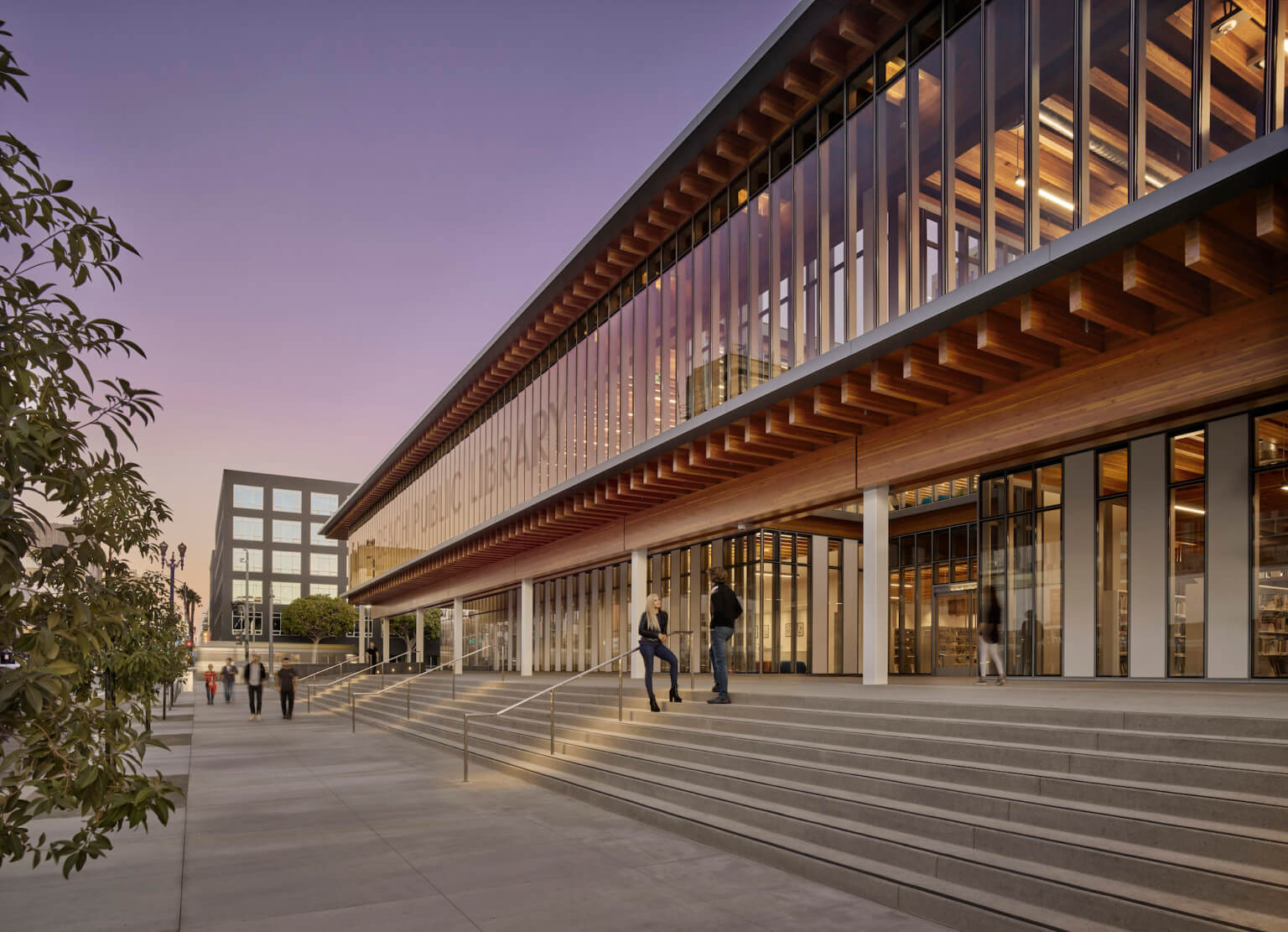 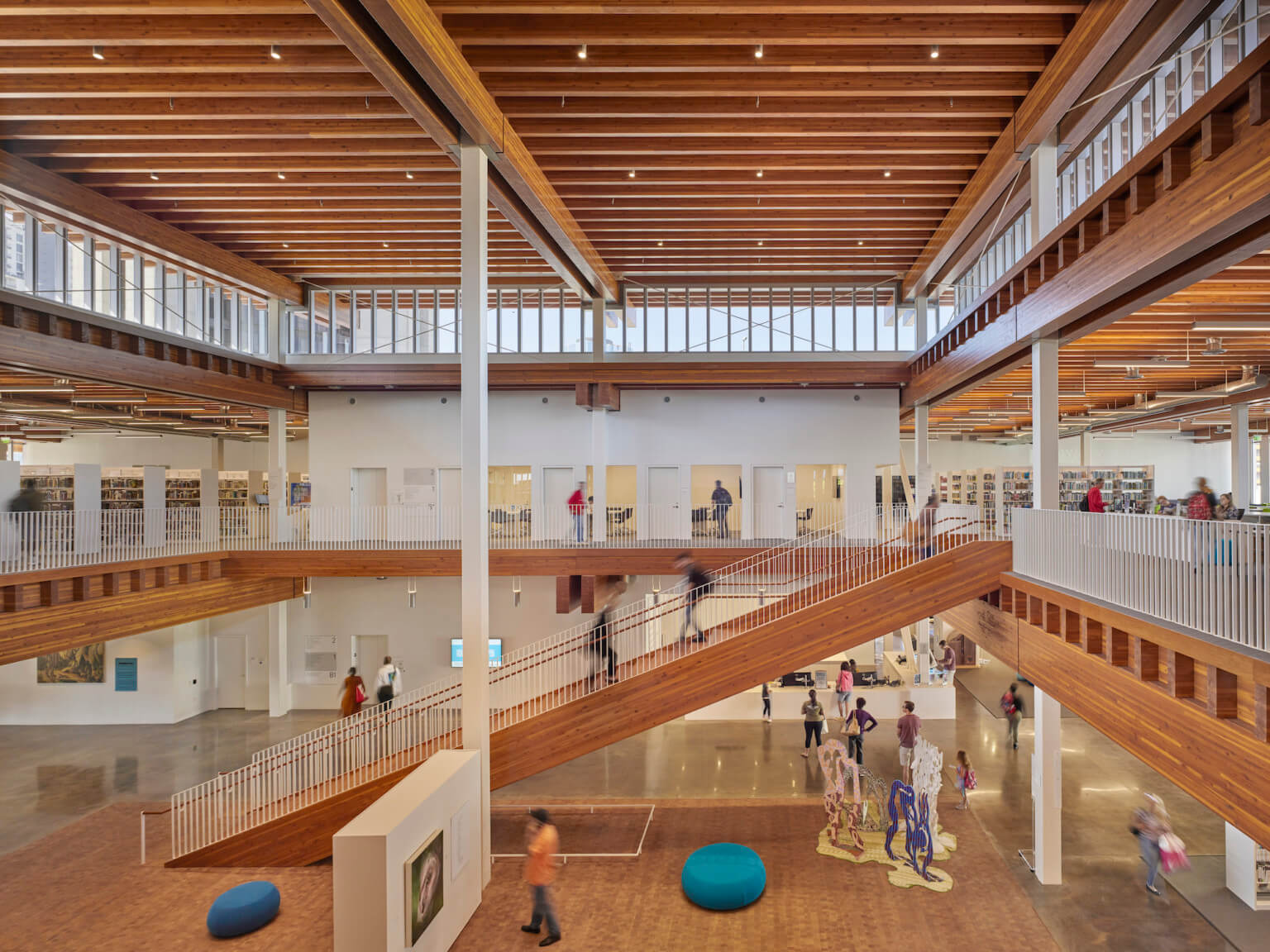 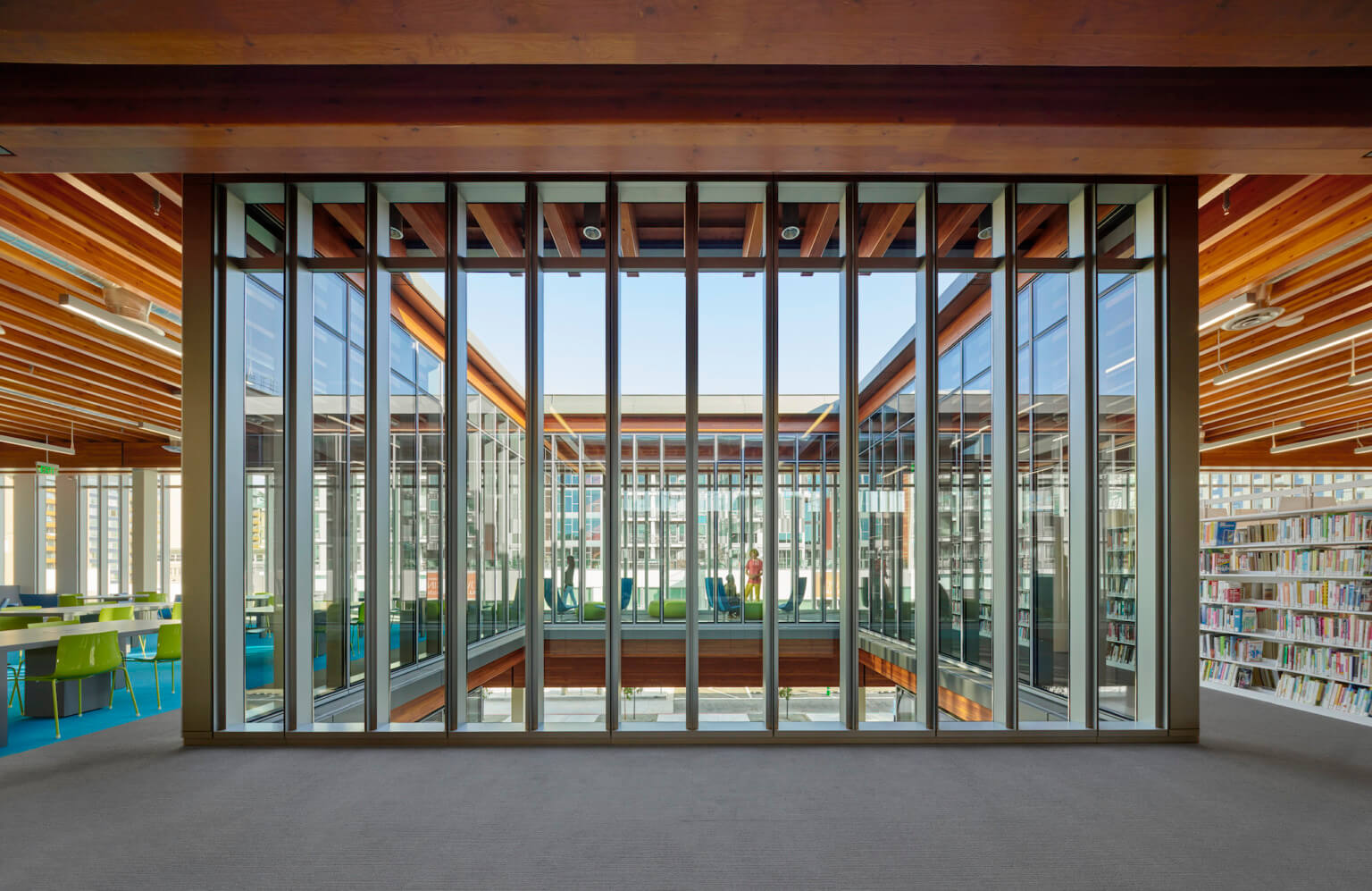 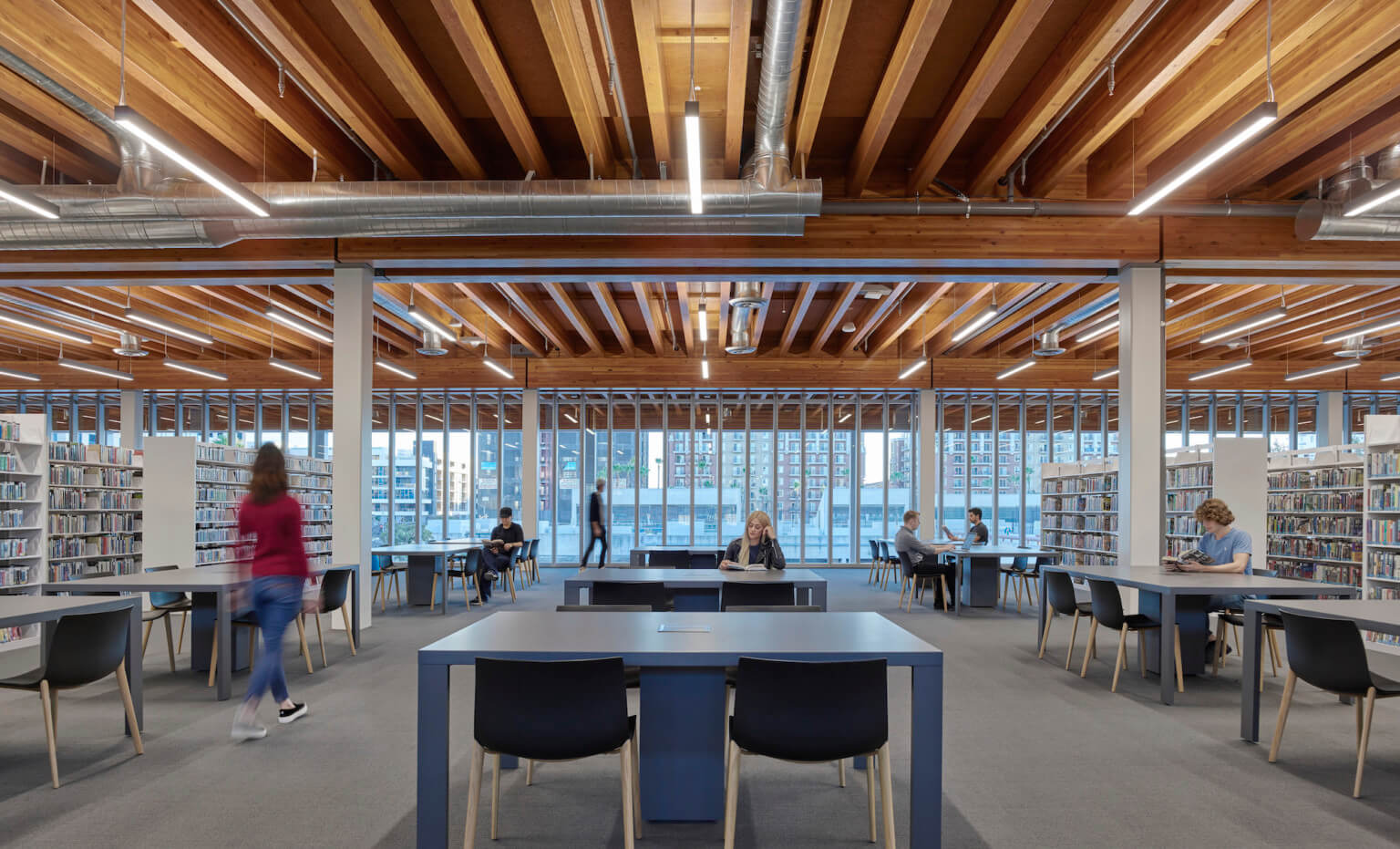 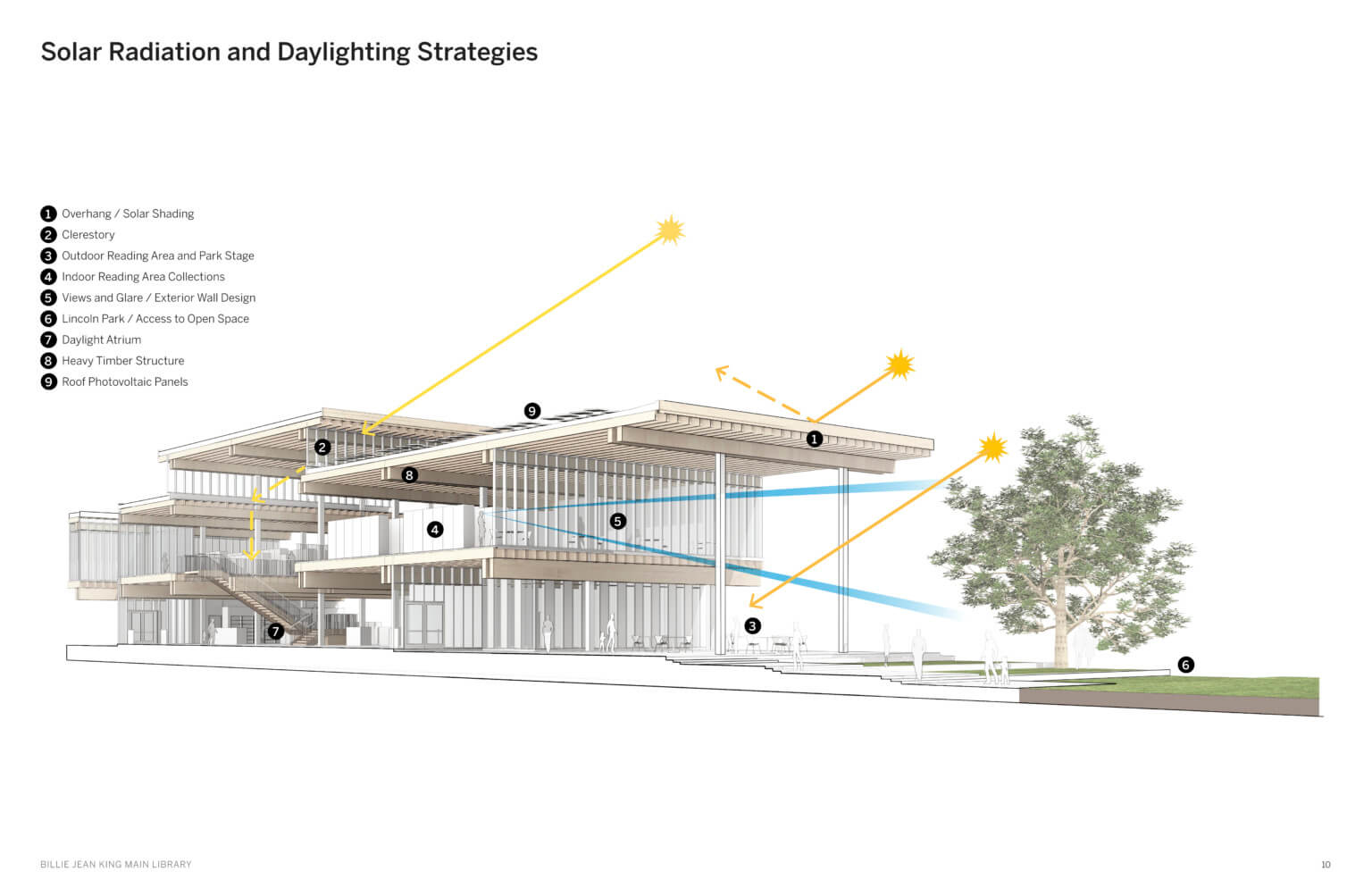 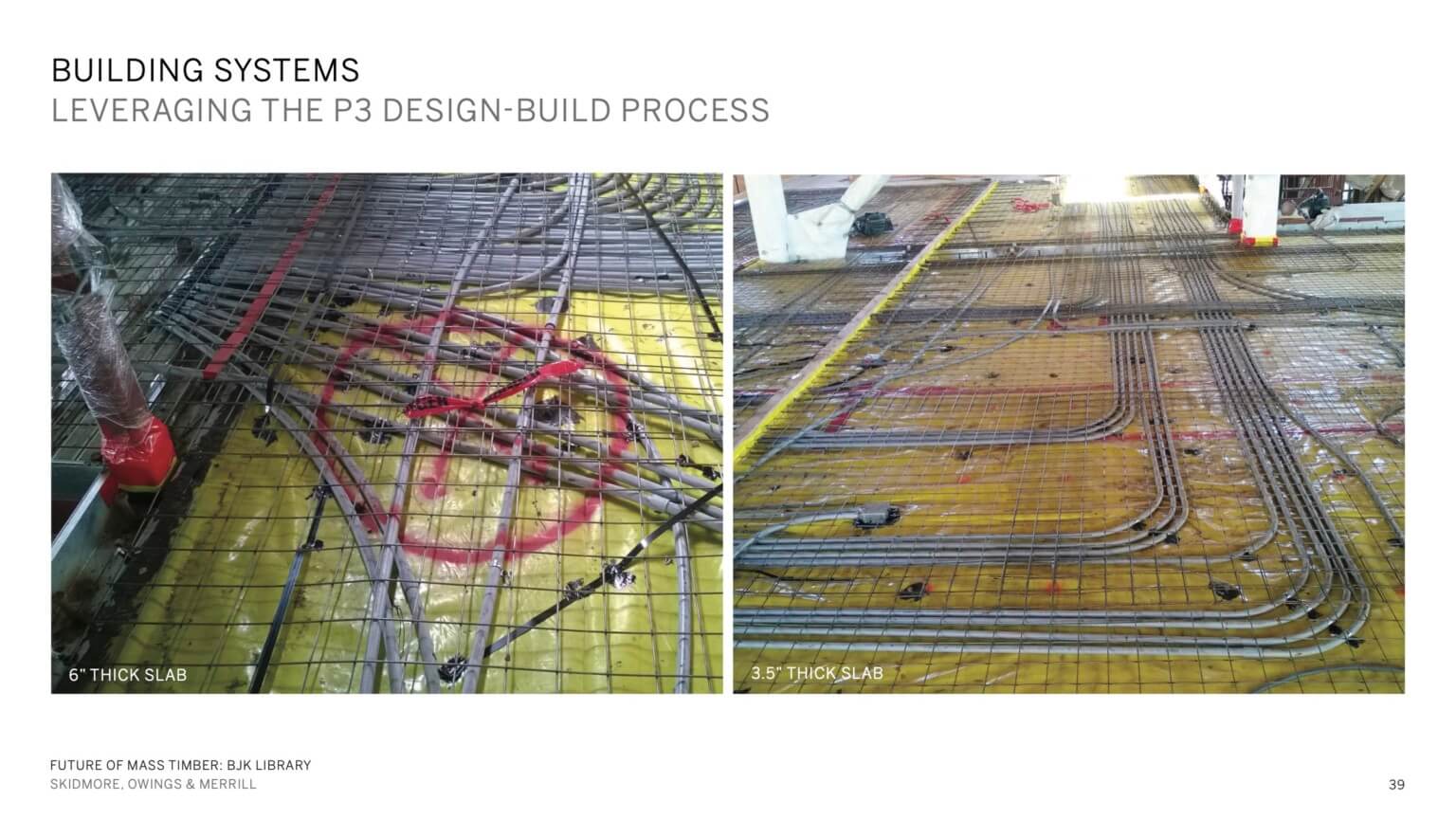 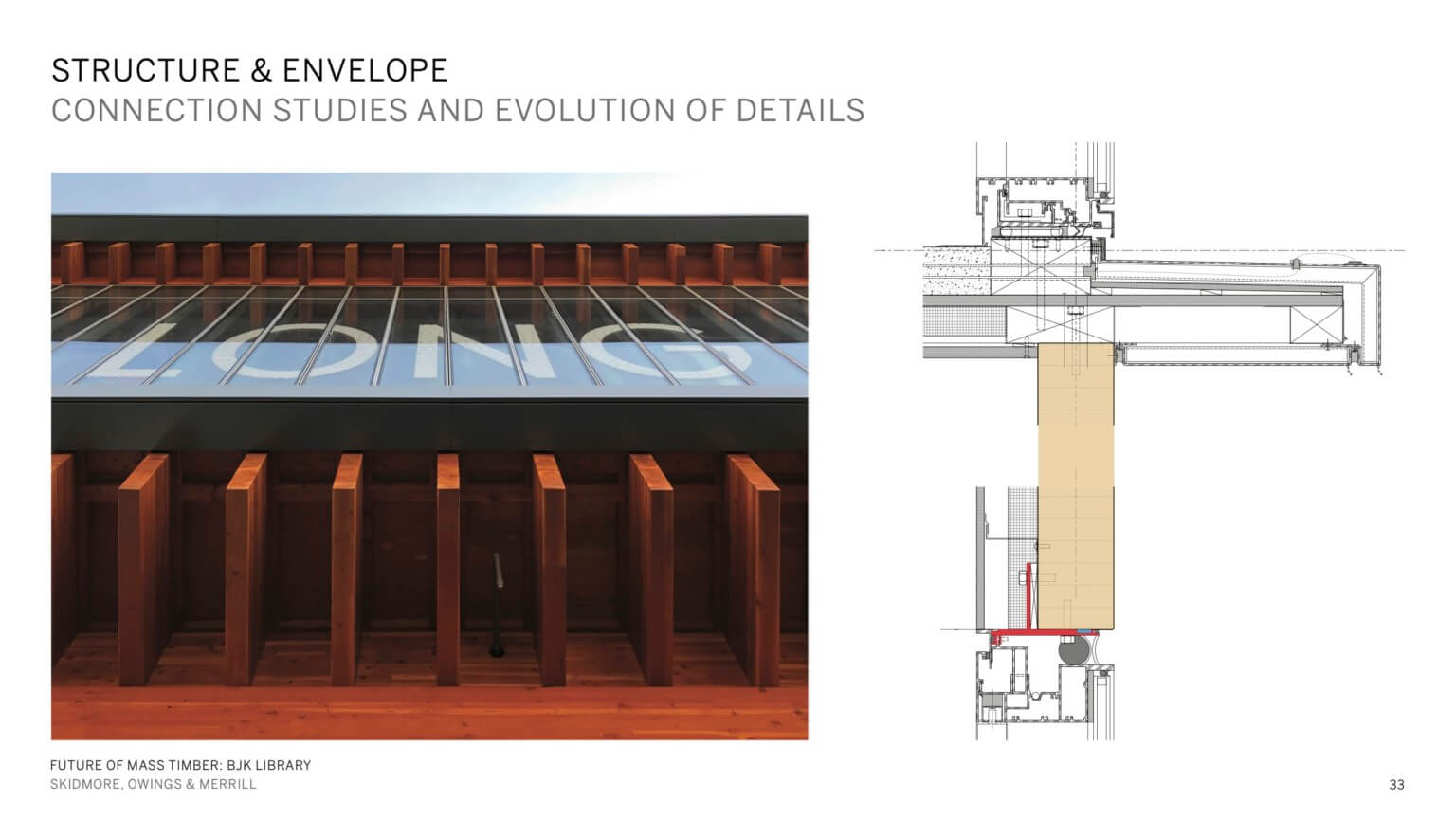 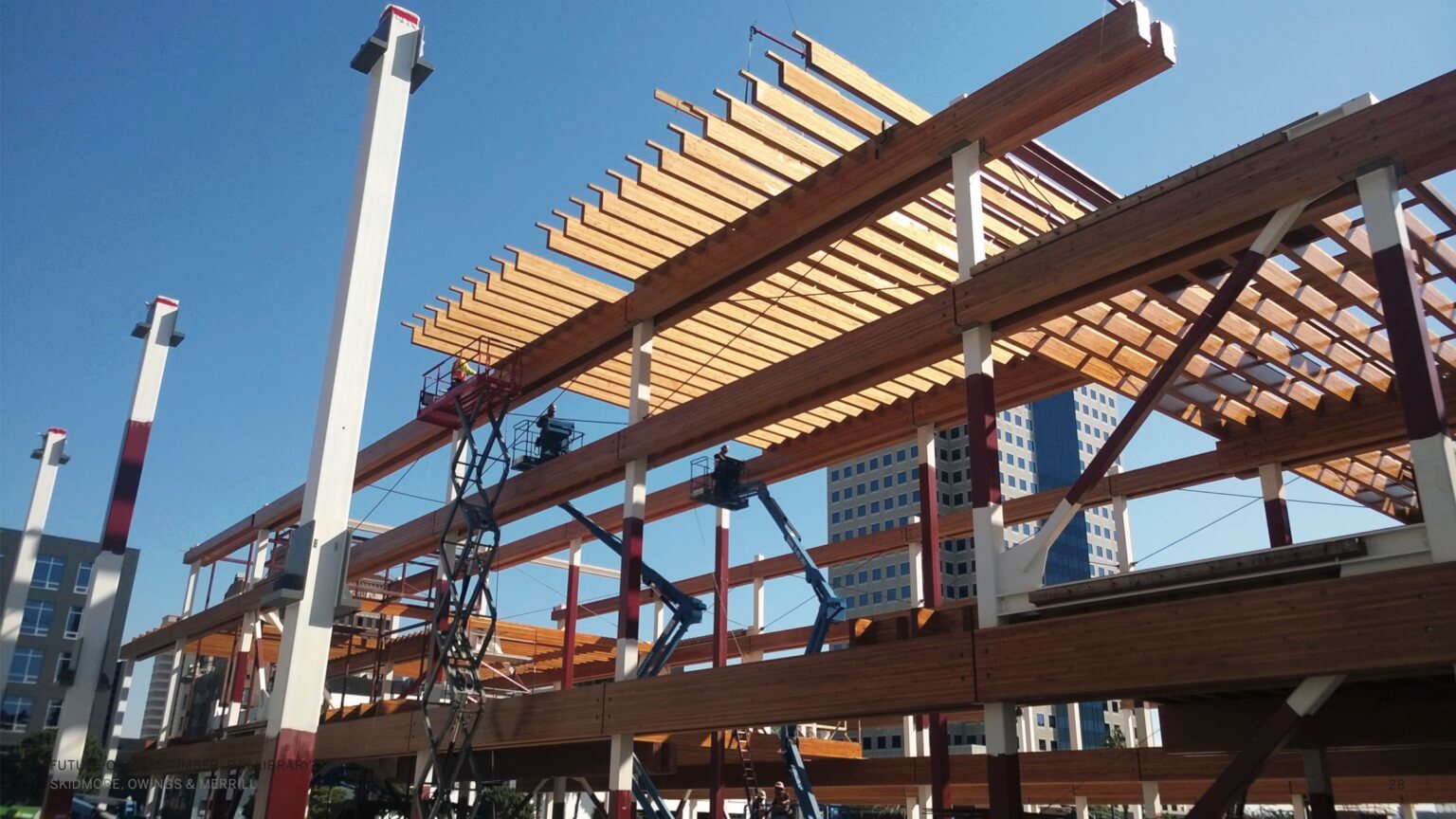 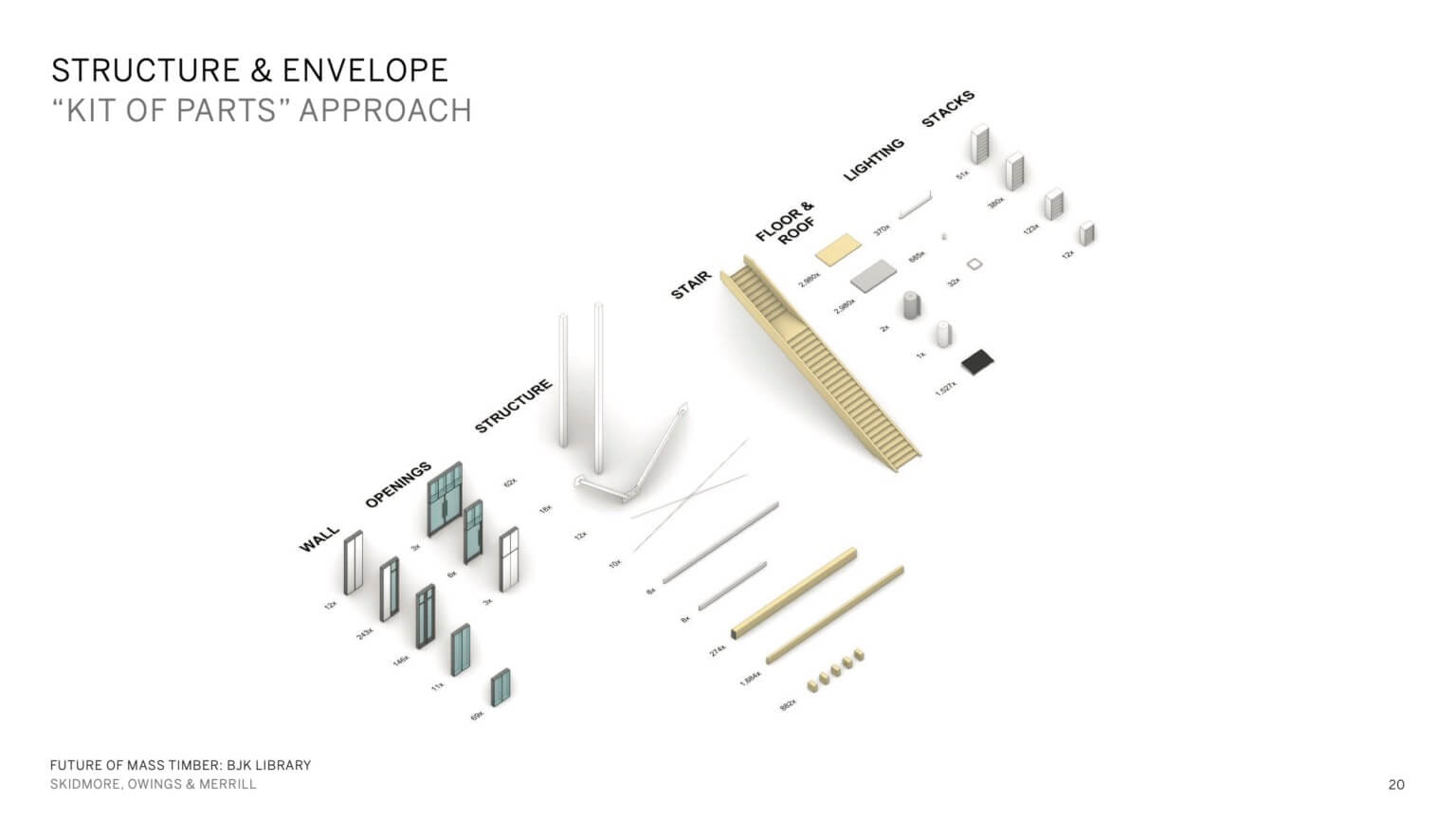 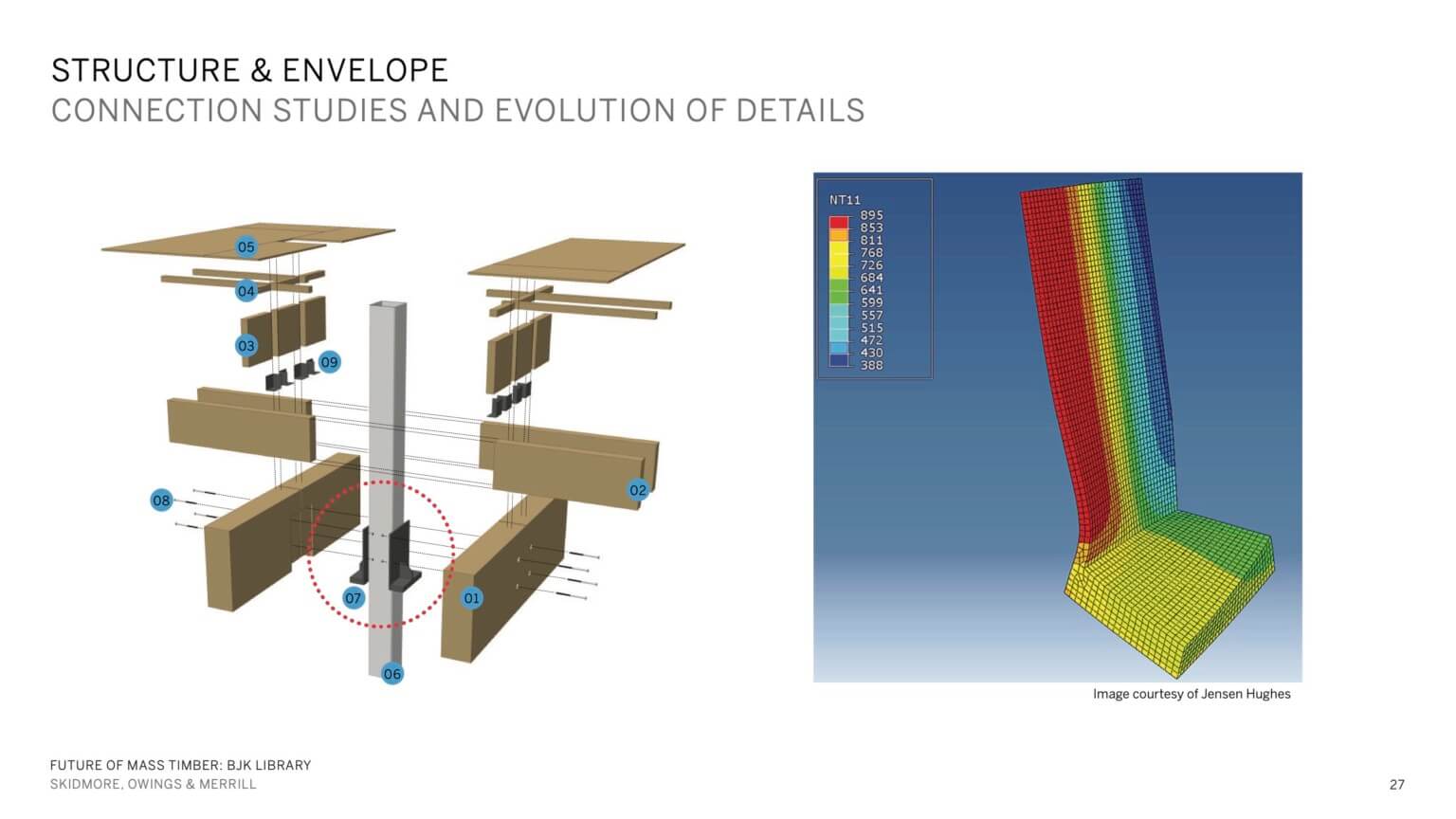 <
►
>
The project is, in many ways, a demonstration of the capabilities of a kit-of-parts approach. (Courtesy SOM)

The Billie Jean King Library is an impressive civic monument located in Downtown Long Beach, California, just a few blocks from the mouth of the Los Angeles River and the bustling Port of Long Beach and joins the rapidly growing nationwide trend towards mass timber construction. Designed by SOM’s Los Angeles office, the pagoda-like structure in many ways harkens back to the firm’s High Modernist roots, integrating architecture and structure, albeit with glue-laminated Douglas Fir beams in place of stainless steel.

The 93,500-square-foot project is the linchpin of SOM’s larger 22-acre Long Beach Civic Center Master Plan and replaces an existing public library dating back to the 1970s, which, like many civic landmarks from that era, lacked sufficient daylight or inviting community spaces. The two-story Billie Jean King Library is a dramatic shift from that dismal state of affairs, and its expansive floor-to-ceiling window walls and clerestory suffuse the easily navigable interior with abundant natural light. 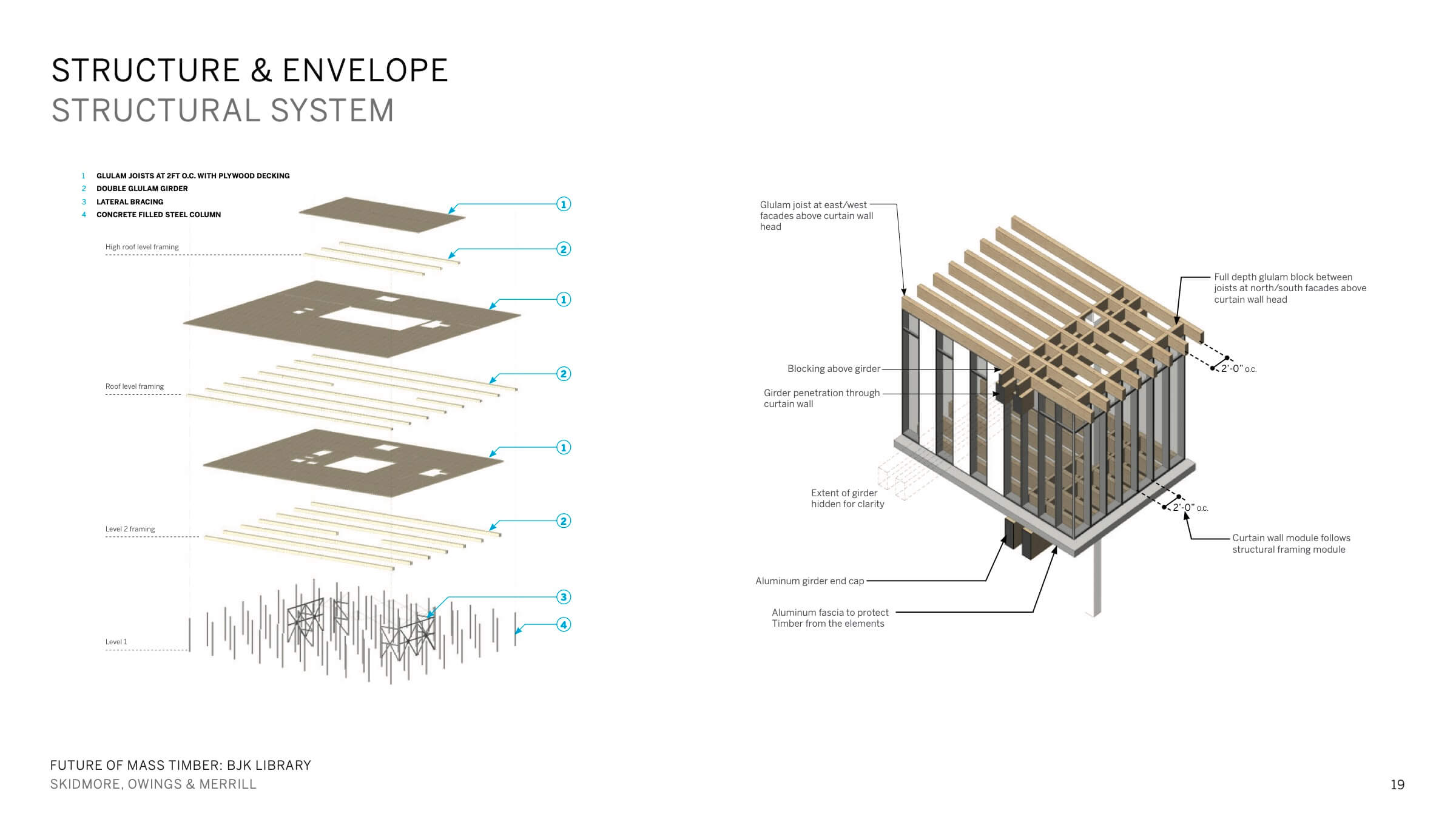 For SOM, simplifying the design and structure of the library was a measure to both maintain a restrained aesthetic and keep the project delivery on time and on budget. “This idea resulted in a kit-of-parts with mostly repetitive members that could be fabricated off-site, installed fairly quickly with minimal waste, and remain exposed as building finishes once complete,” said SOM senior designer Roshanak Mostaghim and senior architect Zarmine Nigohos. “Furthermore, this approach is highly sustainable with respect to conserving material and mitigating waste generated in the field during construction.”

The project rises from a perimeter of concrete-filled hollow steel columns that support a structural system of 36-inch deep glulam girders spaced 30 feet apart, which, in turn, support 19.5-inch deep glulam joists spaced at two-foot intervals. Both handle the compressive load of the floor plate which consists of a three-inch lightweight concrete slab placed atop a three-quarter-inch plywood diaphragm.

A challenge for the design and engineering teams was the routing of MEP systems through the library without unduly disrupting the timber elements. “This demanded enhanced collaboration and coordination via a shared digital building information model; and the design team worked directly with the trade subcontractors to digitally model, coordinate, and ensure the most efficient structural and MEP/FS systems layout to fit within the constraints of the exposed building structure,” continued Mostaghim and Nigohos. “Furthermore, the team utilized a large physical mockup, which became a living prototype to experiment and evaluate the aesthetic, performance, and economic characteristics of the different building systems and their integration.”

Such an attention detail, as manifested in the integration of structure and architecture, is also found at the project’s window wall, which is organized on a two-foot module to match the spacing of the structural joists. Collaborating closely with the fabricator and installer Benson Industries, the team designed a joint at the head of each module to accommodate up to a three-quarter-inch deflection of the glulam members.