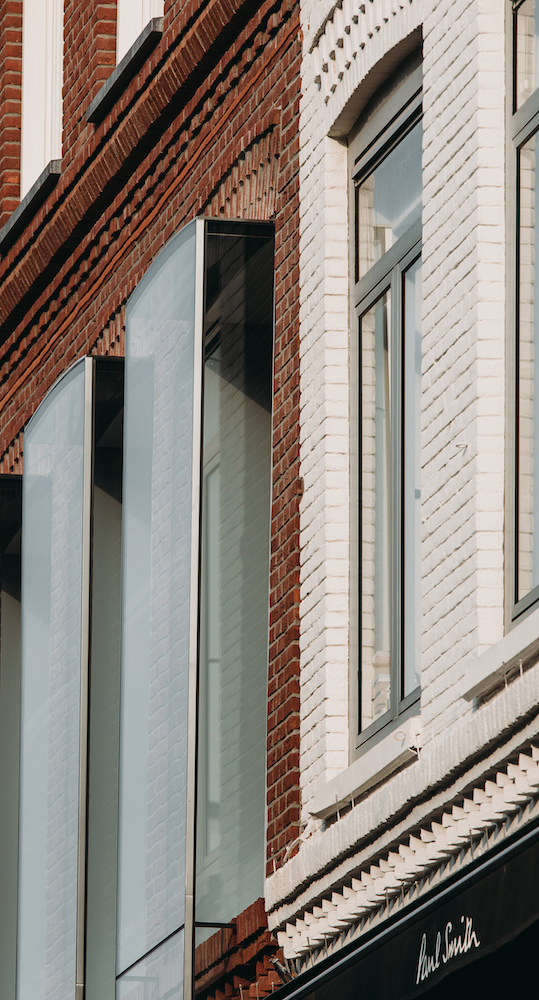 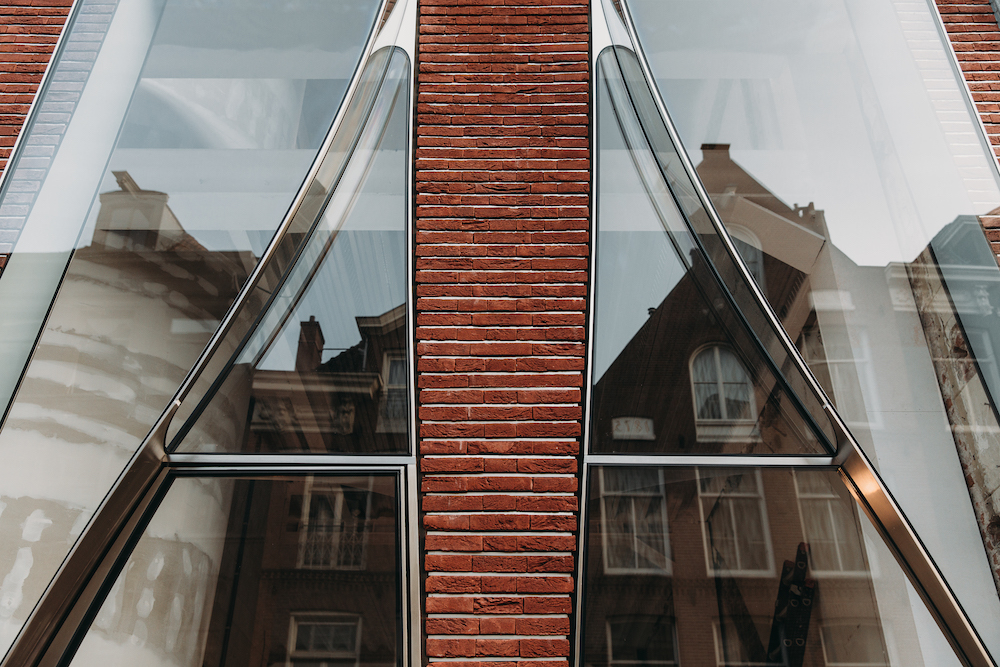 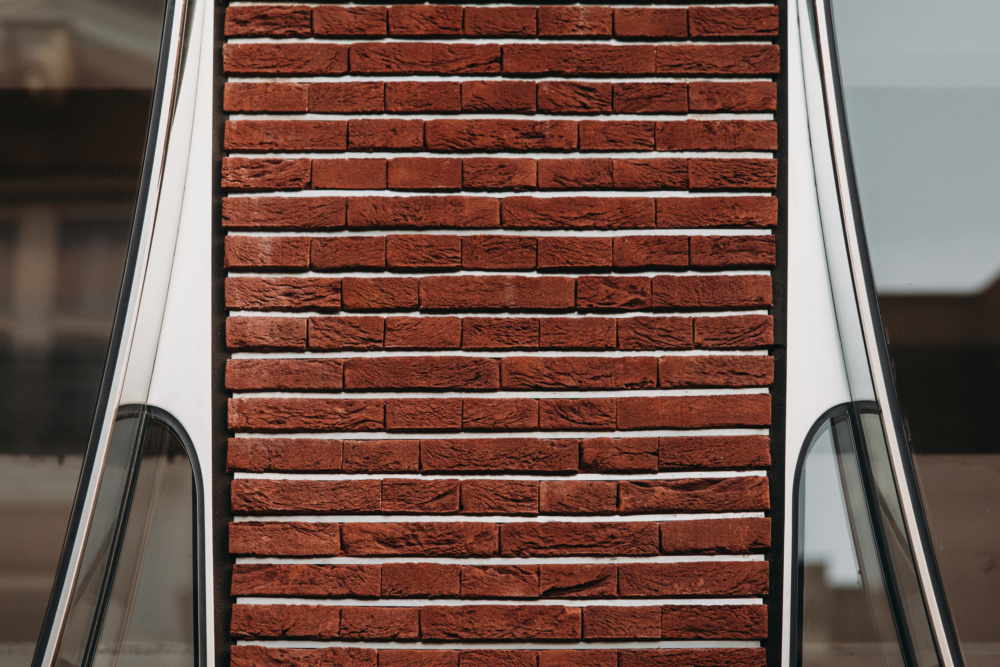 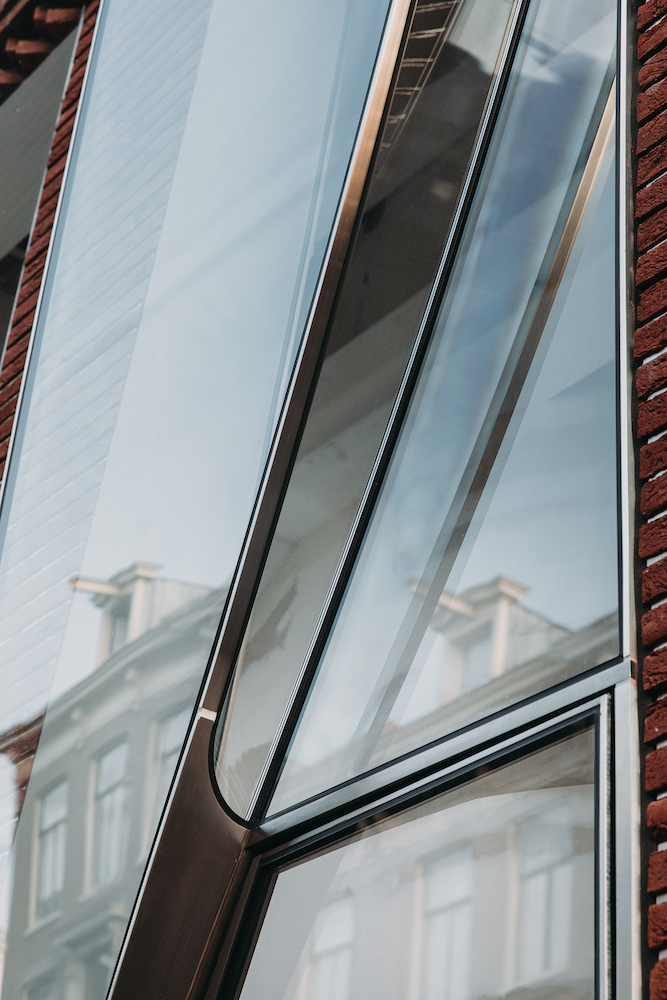 Completed in December 2019, The Looking Glass is a four-story mixed-use renovation for developer Warenar Real Estate that offers a thoughtful solution for merging contemporary design within the centuries-old Museum Quarter of Amsterdam. Designed by Dutch architectural practice UN Studio, the approach addresses both the contextual and use demands of the site with finely curved glass panels and well-crafted brick masonry.

The project faces the Pieter Cornelisz Hooftstraat, one of Amsterdam’s primary retail corridors. Like much of the Netherlands’ architectural vernacular, the area is composed of three to four-story structures of sober restraint. Ornament is largely limited to spandrel brickwork detailing and carved wood brackets at the cornice—this is not a setting for ostentatiousness. UN Studio’s design respects this heritage while heightening the streetscape with a constrained aesthetic flourish, that, in its curvaceousness and subtle steelwork, bears resemblance to a playful Art Noveau storefront in the style of Victor Horta or Frantz Jourdain.

Each bay is comprised of two primary features, low-iron glass boxes and brickwork. At the second story, the glass boxes protrude significantly from the facade before curving and overlapping the groundfloor’s glazing. The maneuver lends a flowing quality to the facade while maintaining full transparency of the lintel and brick-chevron frieze. Each of the glass panels is bonded with structural silicone, and their seams are obscured by narrow and polished stainless steel frames. On the ground floor, the concave underbelly of each curved panel transitions to a broad stainless steel strip that furthers material differentiation at street level. The windows were assembled off-site—no small feat considering that their average height is approximately 27 feet—and installed as prefabricated pieces.

The renovation, which removed the first three stories of brick in favor of glazing, required the insertion of narrow columns of glass-fiber reinforced concrete (GFRC) panels between the window bays. Following the installation of glazing, the GFRC components were covered in a rigid insulation layer. The new masonry is entirely comprised of hand-molded, reddish-brown brick slips produced by the Van der Sanden Group; the brick slips are glued to the insulation membrane and largely follow a Dutch-bond pattern. Although the inclusion of brick on the renovated facade is only surface level, their hand-molded fabrication lends an imperfect and wrinkled surface with slight variances in dimension—a gradient of patina blending with the overall streetwall.

UN Studio founder Ben van Berkel will discuss The Looking Glass, and other projects, at the opening keynote for Facades+ New York City on April 2nd.