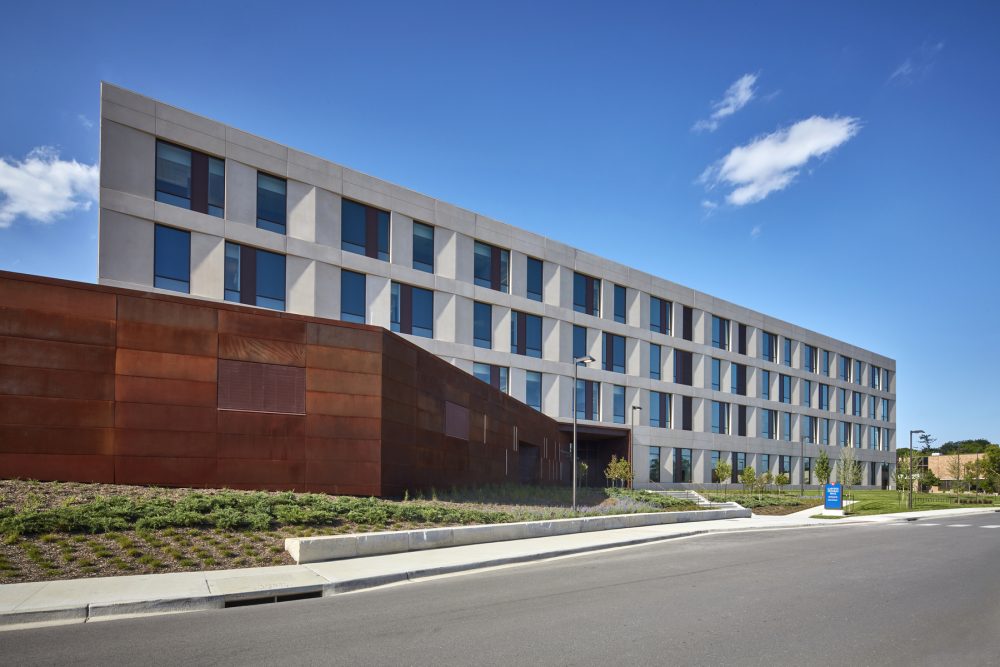 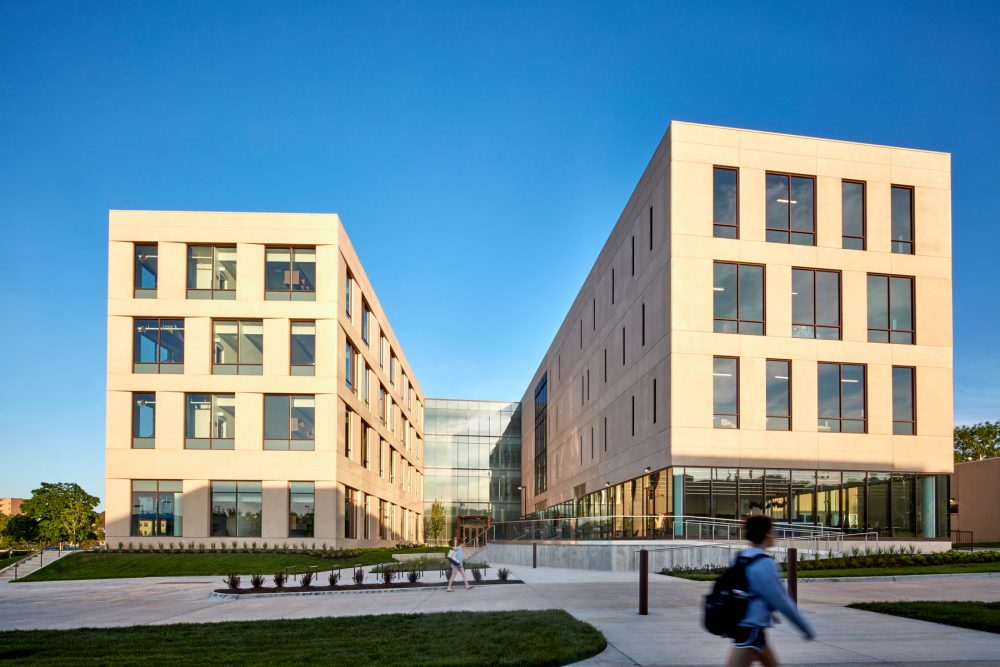 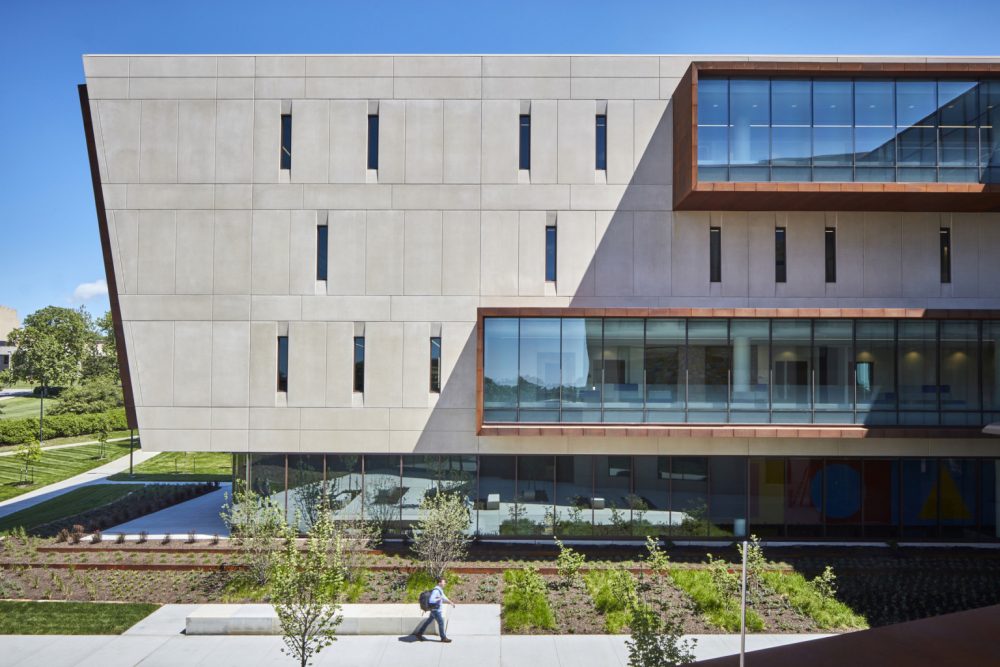 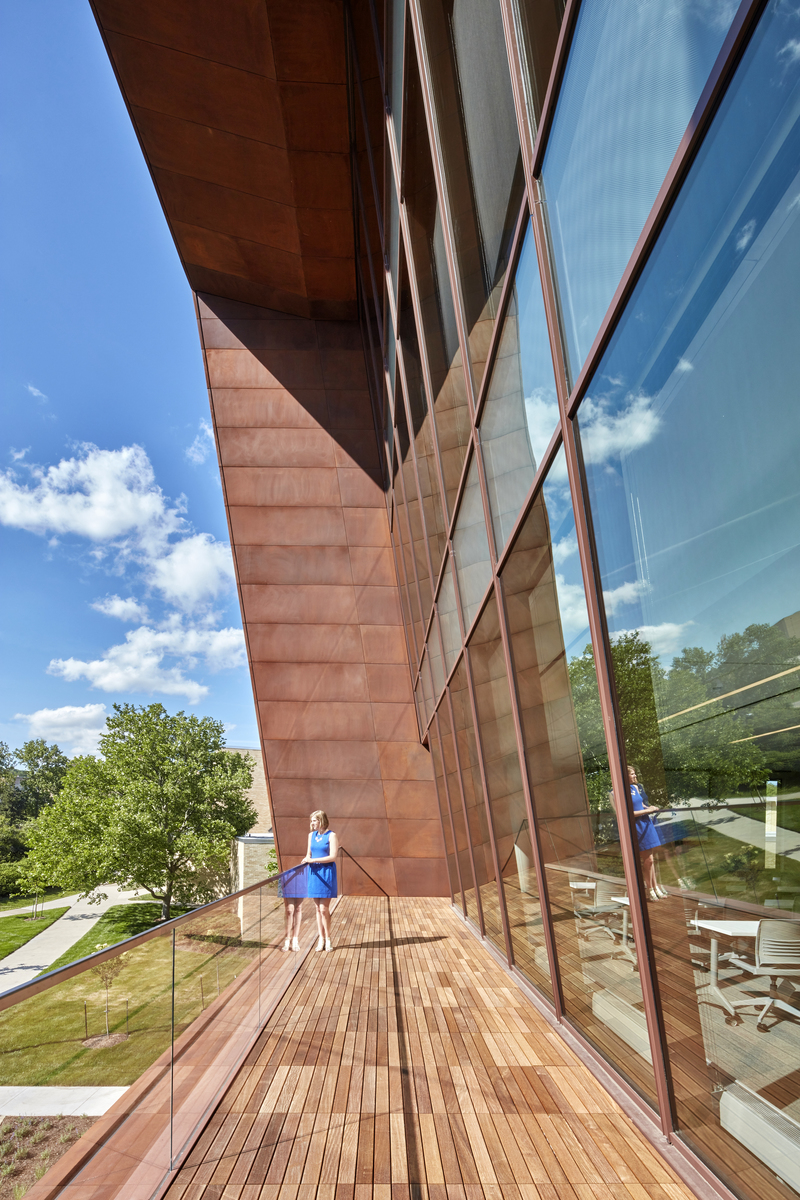 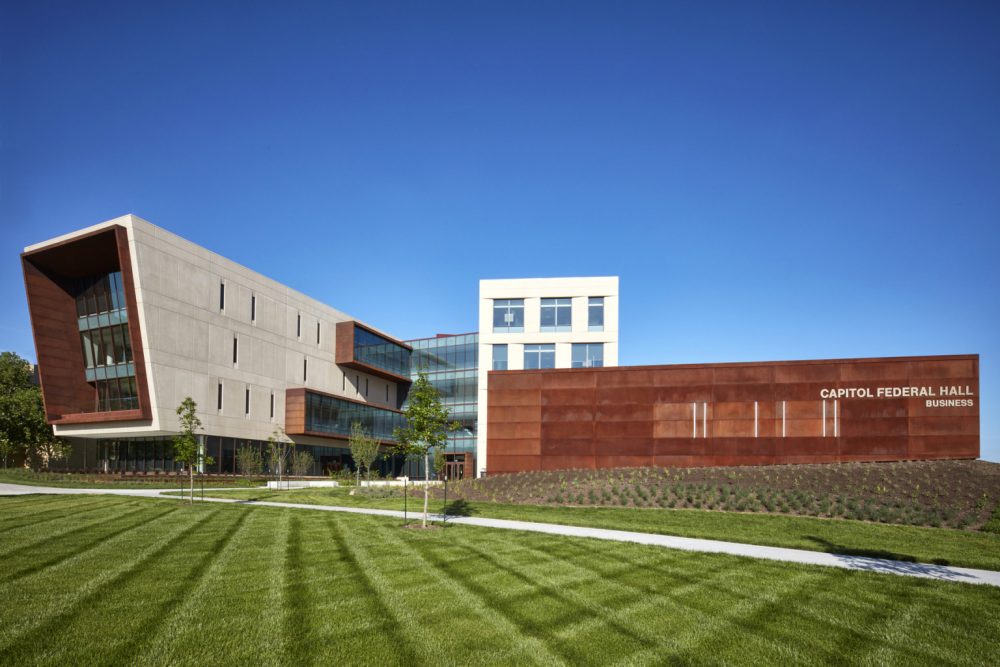 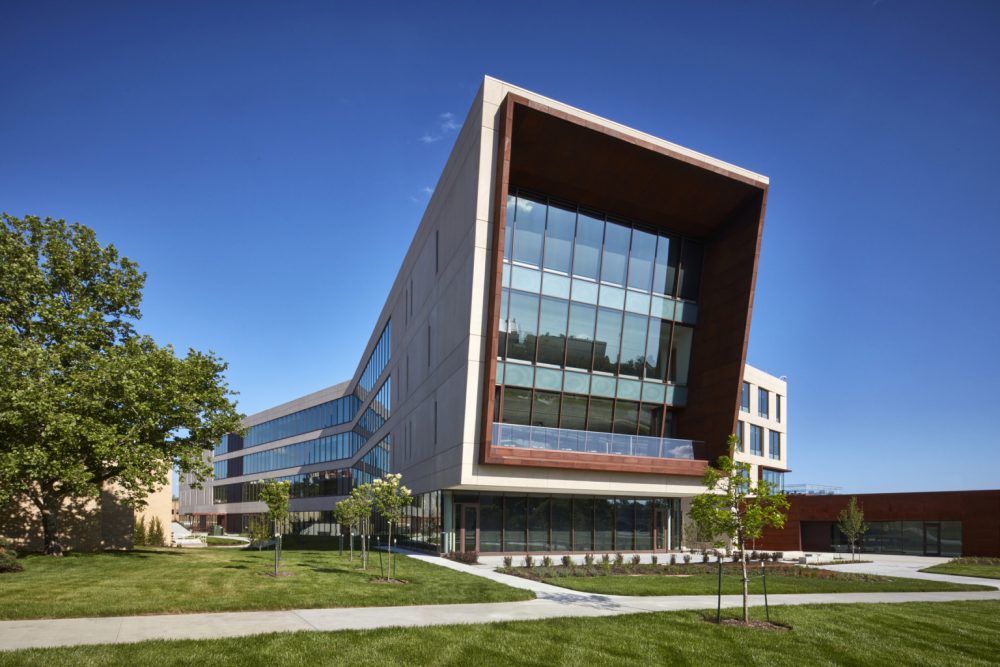 <
►
>
The University of Kansas’s School of Business Capitol Federal Hall was designed by Gensler and GastingerWalker& and clad in precast concrete panels. (Garrett Rowland)

Resting in the Great Plains on the outskirts of Lawrence, Kansas, sits Capitol Hall Federal Building, the most recent addition to the University of Kansas’s School of Business. The building, designed by Gensler’s Chicago office and Kansas-based firm GastingerWalker&, is a response to the university’s growing enrollment and consolidates lecture halls from across campus. The massing of the project establishes a formidable presence on the edge of campus and possesses a distinct character with chamfered precast concrete panels and weathered steel.

The 165,000-square-foot building is comprised of two four-story volumes linked together at the hip by a glazed atrium—on the south elevation, the building pushes toward the adjacent road with a one-story pavilion clad in weathered steel.

For the design team, the material palette of the project was intended to reflect traditional design found throughout the campus. “We utilized a traditional palette, but in a new and unexpected manner, as this solution allowed us to create a building that looks forward to what’s next in business education while also reflecting the traditional aesthetics and materials of the campus,” said Gensler co-managing director Brian Vitale. “The precast concrete panels—colored grayish-white to resemble limestone—was designed to have as much texture as possible to create shadows and highlights that move throughout the day with the sun. We saw this on many of the more traditional facades, especially around entryways and windows that were deeply inset.”

Enterprise Concrete, which has production facilities in Nebraska and Texas, produced the precast concrete panels. Each ‘sandwich’ panel is comprised of roughly three inches of rigid insulation placed between four inches of concrete. According to Gensler technical director John Natale, the north-facing modules were welded to the slab edge at intermittent points, while those to the south are tied back to the steel structure for lateral support—all span column to column, reaching widths of 35 feet.

While concrete is the primary facade element of the project, weathered steel, produced by Zahner, plays a critical role in softening what could otherwise be an overwhelming mass. The weathered steel, part of their Solanum Steel series, serves as a framing device for glazing boxes found at the courtyard, and the dramatic multilevel glazing bay found on the northern volume.

Gensler senior associate and technical director Stephen Katz will present the Capitol Federal Hall and other projects during Facades+ Enclosure Innovations in the Midwest on July 30 as part of the “Bespoke Facades: Design Methods for Custom Enclosures” panel.