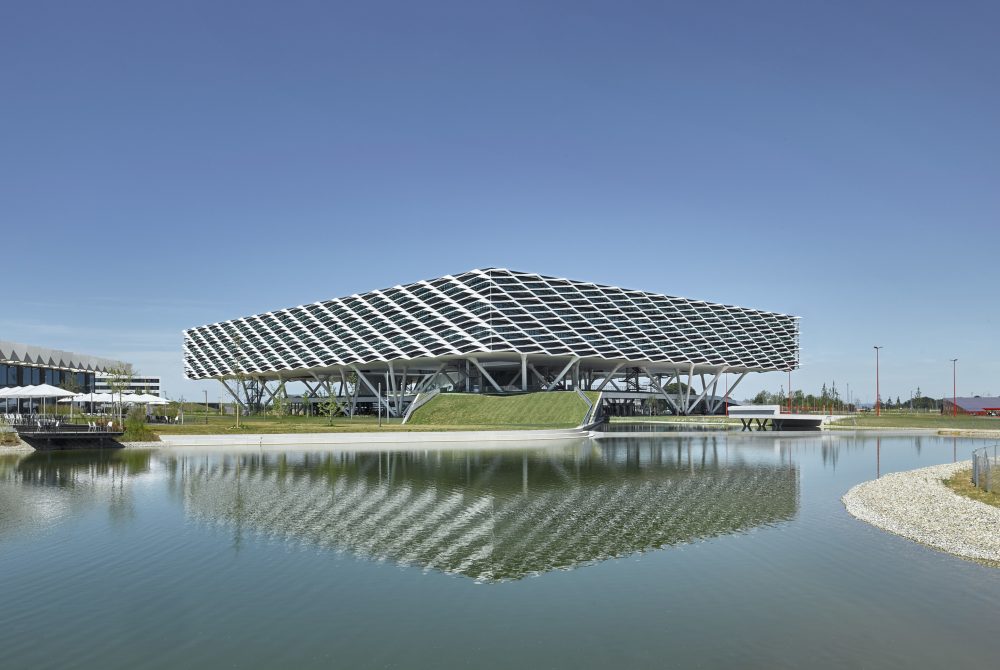 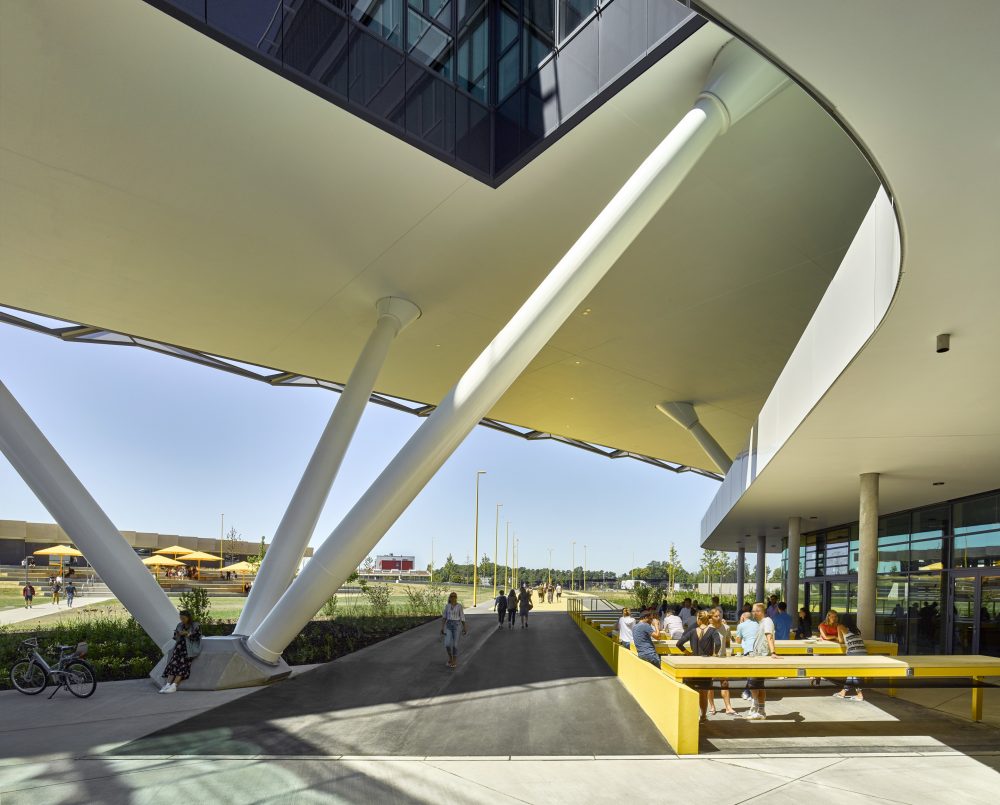 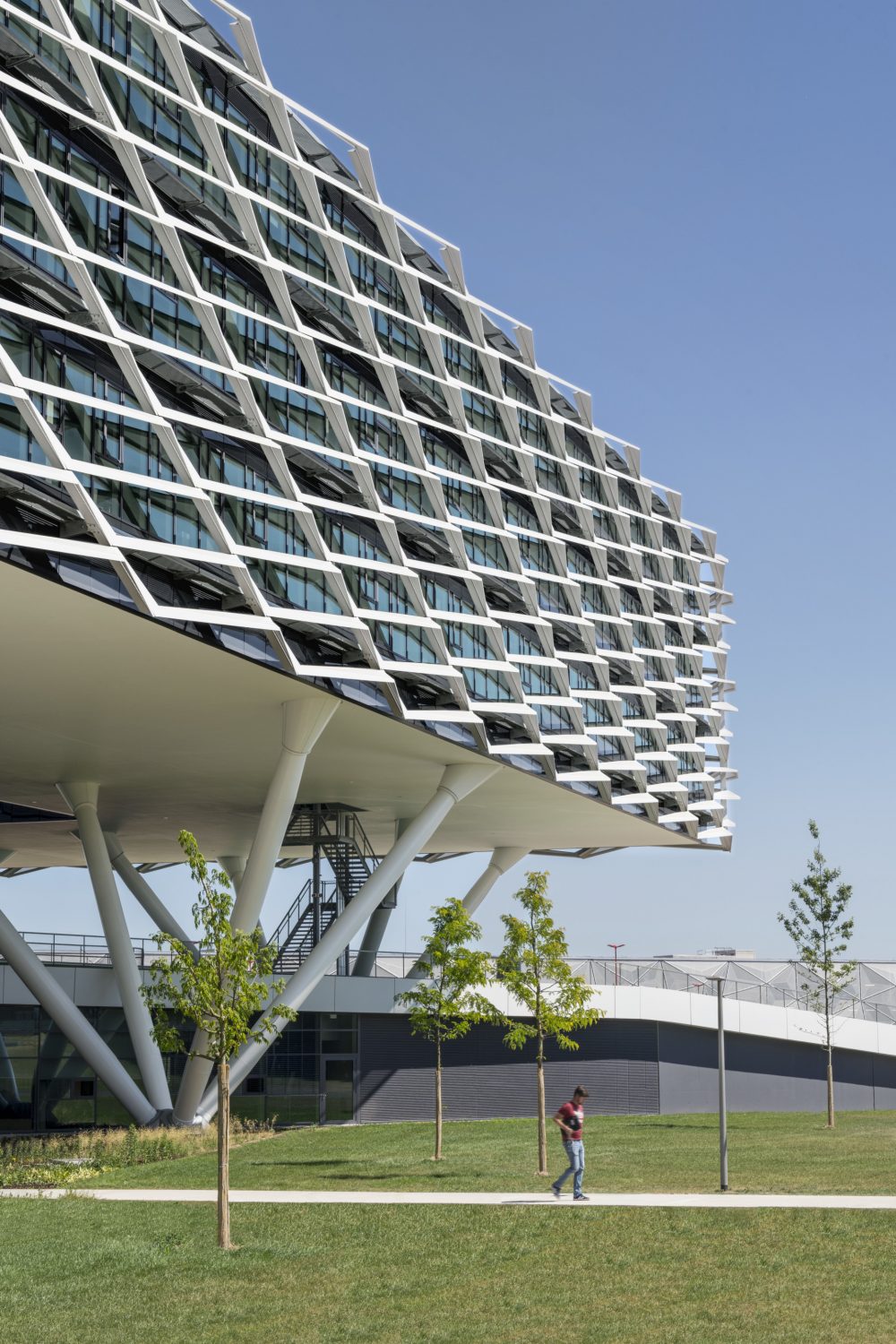 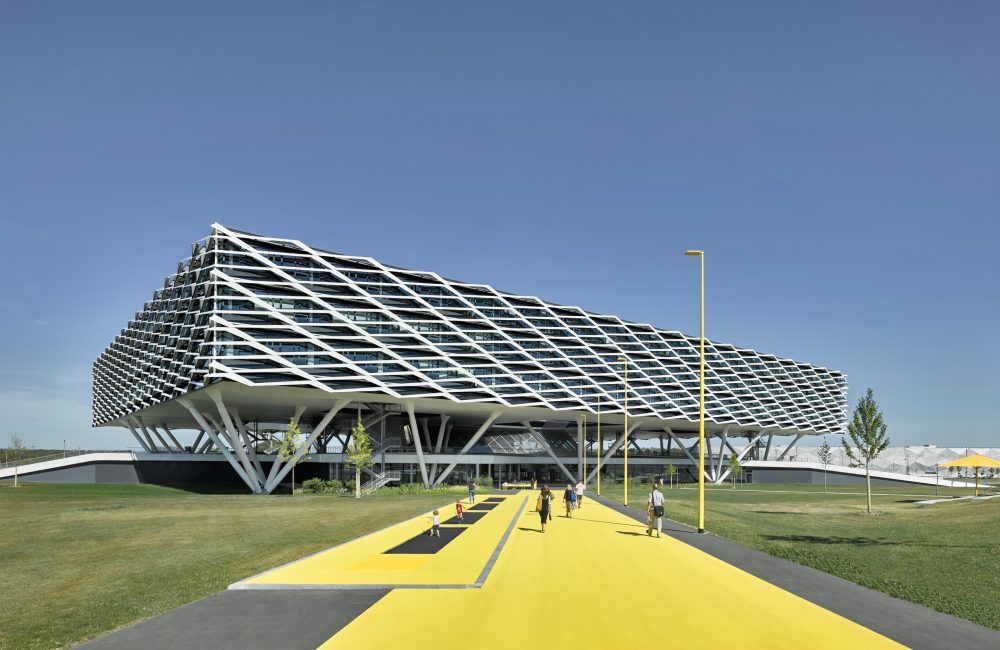 <
►
>
The Adidas World of Sports Arena designed by Behnisch Architekten is a new office space and reception area located on the Adidas’s corporate campus. (David Matthiessen)

Herzogenaurach is a small Bavarian town located just outside of Nuremberg, comprised of steeply-pitched half-timber structures, cobbled streets, and a green belt of agricultural land. While the setting of Herzogenaurach is tied to a pastoral present and past, the town, being the home of both Adidas and Pumas, is inexorably tied to the all-encompassing network of global industry and trade. Completed in 2019, the Behnisch Architekten Adidas World of Sports Arena boosts the region’s prestige with a finely engineered pilotis-supported volume shrouded by a meticulously designed folded aluminum sunshade.

The approximately 590,000-square-foot project was awarded to Behnisch Architekten in 2014 following an international competition and now serves as the new office and reception for the larger Adidas World of Sports corporate campus. The box-like structure rises from a network of angeled and clustered pilotis which, in a hovering-like effect, keep views across the campus intact whilst providing a comfortable outside space.

The application of fixed external sun-controlling systems is not novel in and itself, but Behnisch Architekten has established particular expertise in adapting this basic concept across multiple projects, such as the Agora Cancer Research Center in Lausanne, Switzerland, and the Harvard University Engineering Complex. Each project is unique, and Behnisch has utilized the case studies as learning experiences to be applied to the next.

For the Adidas World of Sports Arena, Behinisch cited two primary aspects as influencing the design of the sun-control system. “We sought to give the building a sculptural appearance with an undefined sense of scale. To this end, we covered it with a grid of shading elements and developed an intelligent sun-control system integrated into the building as a permanent fixture,” said Behnisch Arkitecten partner Robert Matthew Noblett. “These elements disguise the dividing lines between the individual stories and screen the windows and key functional details. Independently of the time of day or the season, the building retains its special character.”

Seeing as the aluminum facade system was designed to counter glare and solar heat gain, Behnisch prudently signed on collaborators daylight consultant Bartenbach Lighting Design and facade consultant KUB Fassadentechnik at the onset of the design process. Each of the diamond-shaped shades is identical in dimensions and measure approximately 27′ by 4′; however, aspects such as depth and flaring differ across each elevation—the building sits slightly off the north-south axis—in relation to solar exposure.

“With the aid of the thermodynamic building simulation, we were able to geometrically optimize the shading elements and ensure a high degree of daylight use and a reduction in the thermal load on the interior spaces,” continued Noblett. “The geometry of the sun-control wings designed by the planning team was pre-dimensioned by the KUB Fassadentechnik with precise specifications for the movements that were to be included and the assembly sequence. Any insights that we gained from a visual mock-up were directly incorporated into the final detail planning.”

Munich-based manufacturer Dobler Mettalbau fabricated the shades and the facade system, which consists of an aluminum frame held to a steel substructure which is in turn fastened to the structural system with support brackets. Each member of the substructure spans 27 feet and supports four shades, which are attached to floating bearings.