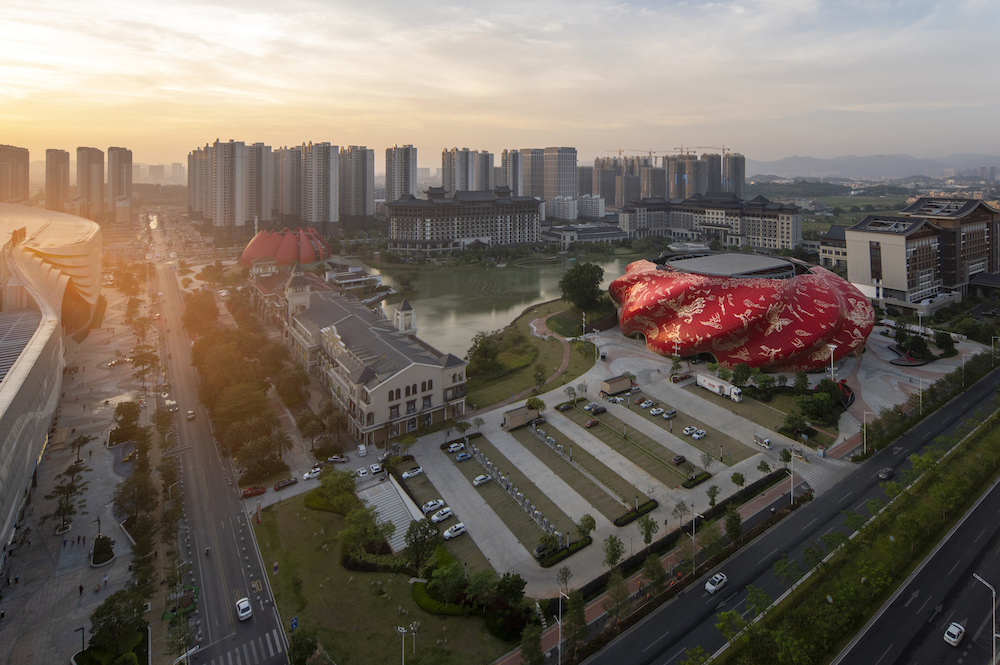 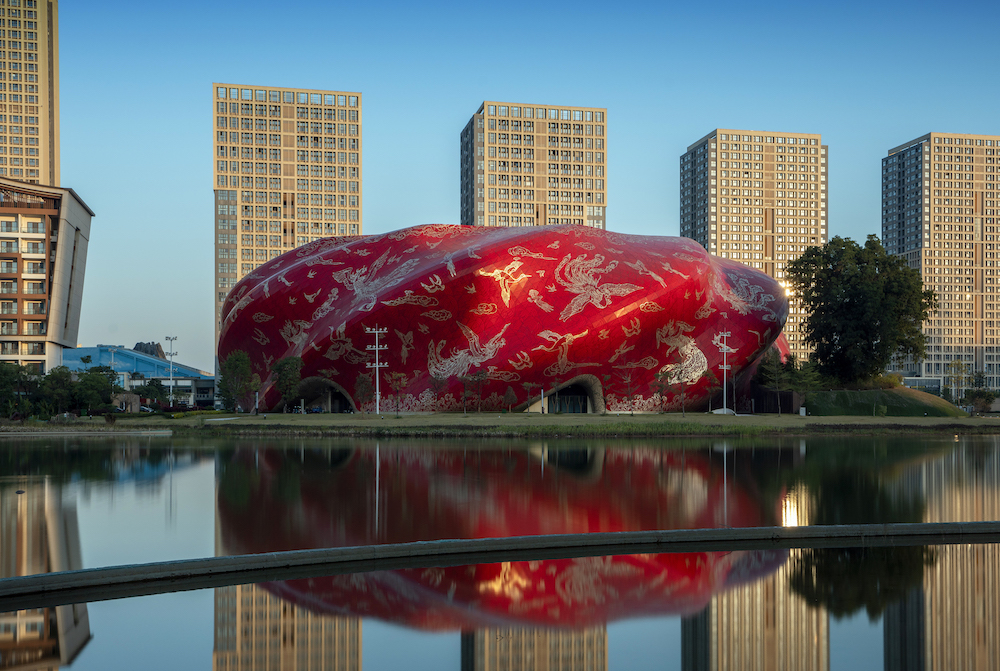 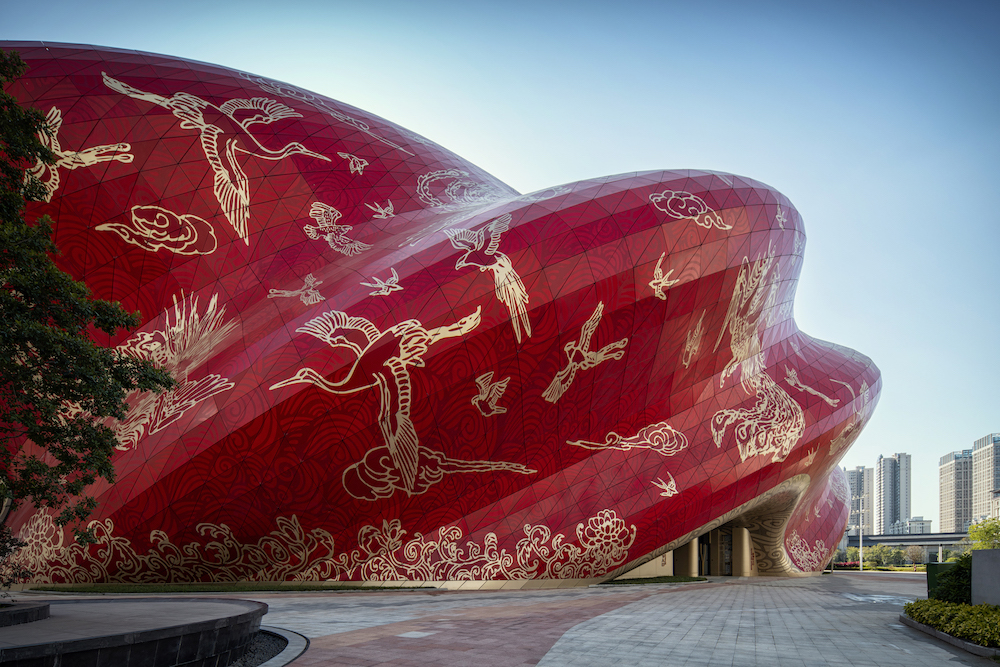 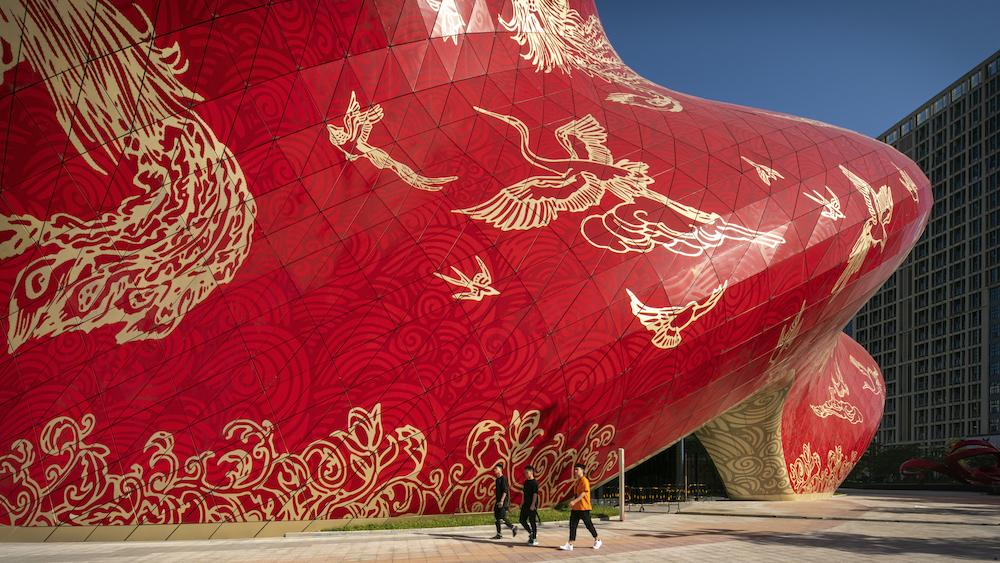 <
►
>
The Guangzhou Grand Theater was designed by Steven Chilton Architects and is set to open this year.(Chong‐Art Photography)

The city of Guangzhou rests at the border of the Pearl River Delta and the South China Sea and is the capital of Guangdong, China’s most populous and prosperous province. As one of the largest economic centers and entrepots in the region—a role dating back to the formation of the Silk Road—the city has undergone a developmental frenzy in the last half-century, which, in recent years, has fueled the construction of state-of-the-art cultural facilities. Scheduled to open this year, the Sunac Guangzhou Grand Theatre designed by London-based firm Steven Chilton Architects (SCA) and the Beijing Insitute of Architectural Design (BIAD), is one such project, and entrances with an undulating facade of tessellated red aluminum panels.

The riotous facade encloses a 2,000-seat theater and, as that function demands, is largely windowless save for the lifted entrance and service portals found at the ground floor. This impenetrable quality provided the architectural team an opportunity to treat the facade as canvas, which led to their collaboration with artist Zhang Hongfei. The imprint draped across the facade is a conceptual interpretation of the popular local myth 100 Birds Paying Home to the Phoenix and, in a further bid to evoke the region’s history, follows the compositional style of tapestries and ornamental robes.

SCA’s design for the theater is, in many ways, an exposition of technical know-how and advanced digital modeling, prerequisite skills required to handle the geometry of 14,600 triangular panels each measuring approximately 6’6″ by 3’4″. “The form of the building was determined in tandem with the internal layout: once we had established the number of openings into the building we were able to set up a generic version of the model and fix the number of folds in the surface to 10,” said SCA director Steven Chilton. “Once we had a version of the pattern projected onto a cylinder, we positioned it around the building geometry and reprojected the pattern horizontally onto the panels.”

“The legibility of the design as it crosses each panel was down to the skill of the steelworker, painters, and installers,” continued Chilton. “Each node allowed a limited amount of flexibility, so it was critical that the geometry and accuracy of the install on-site be carried out to a high standard.”