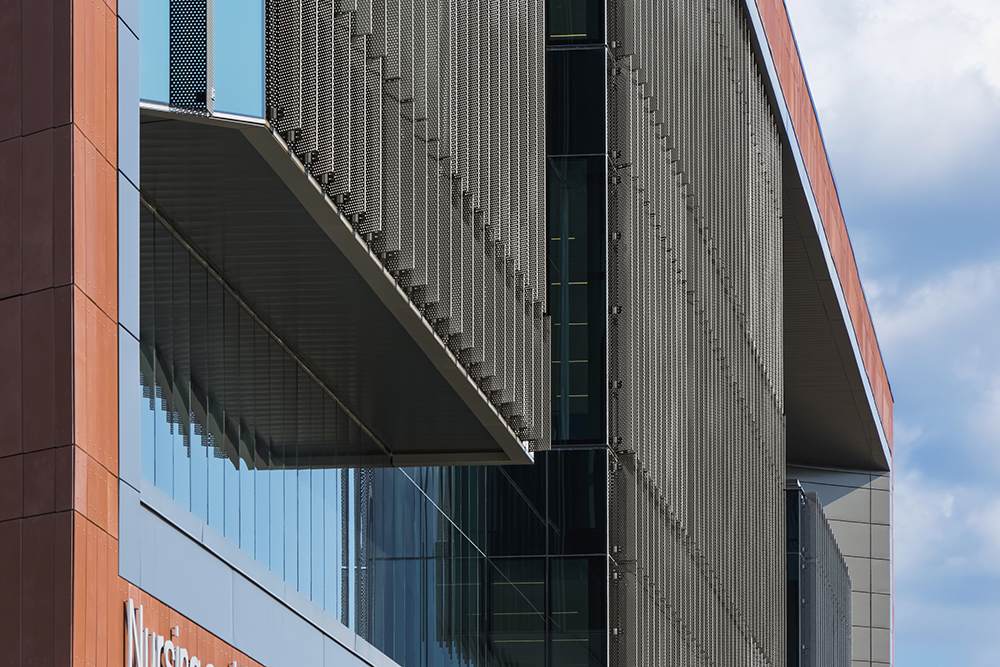 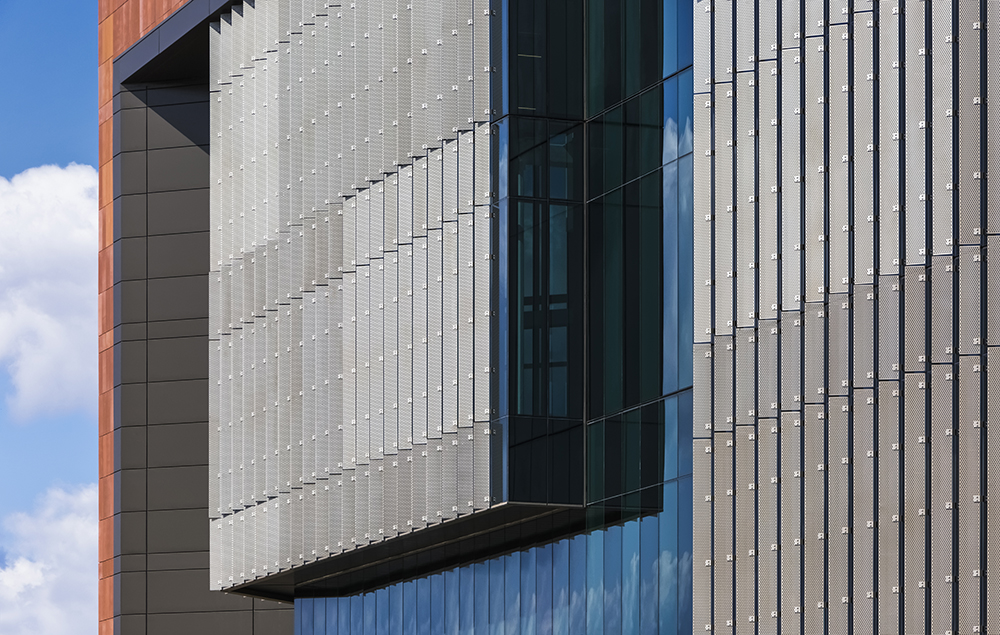 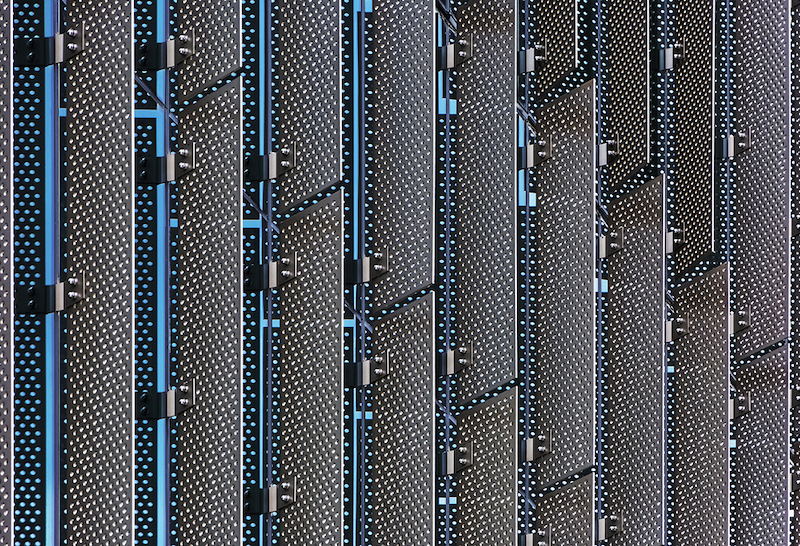 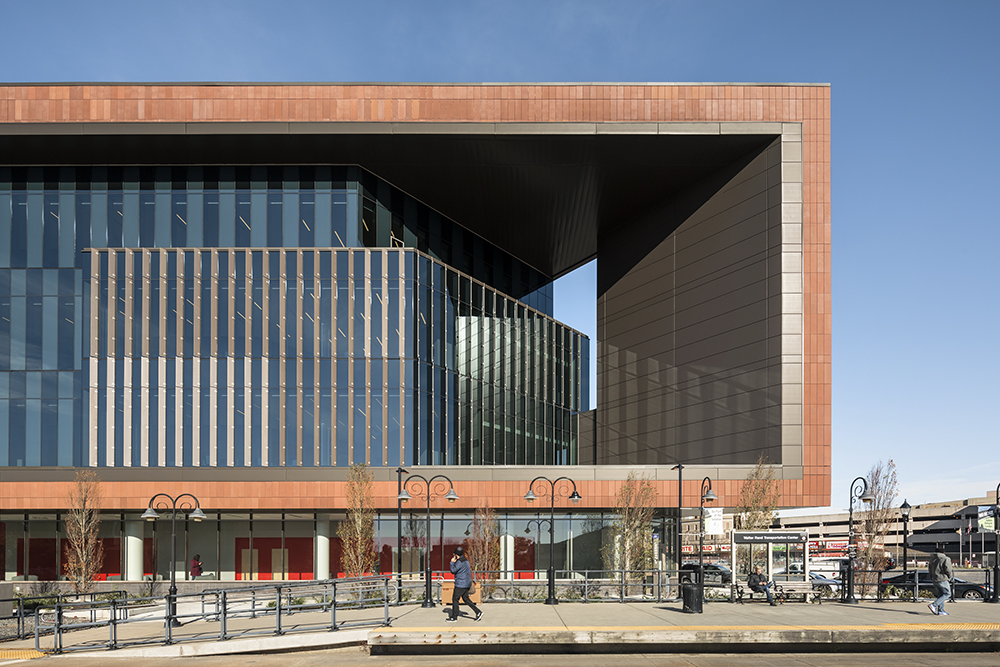 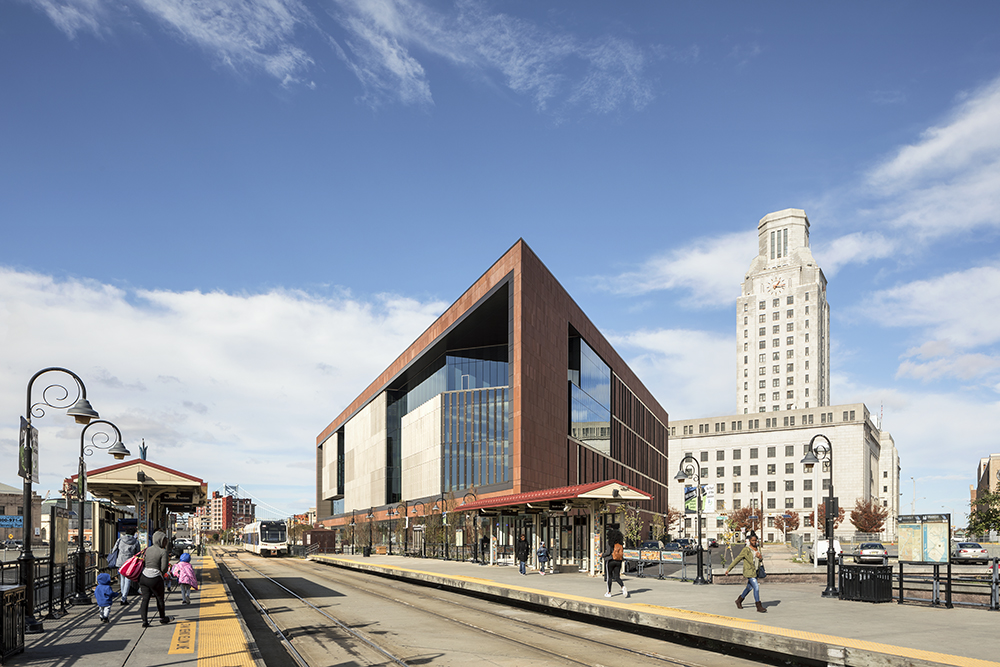 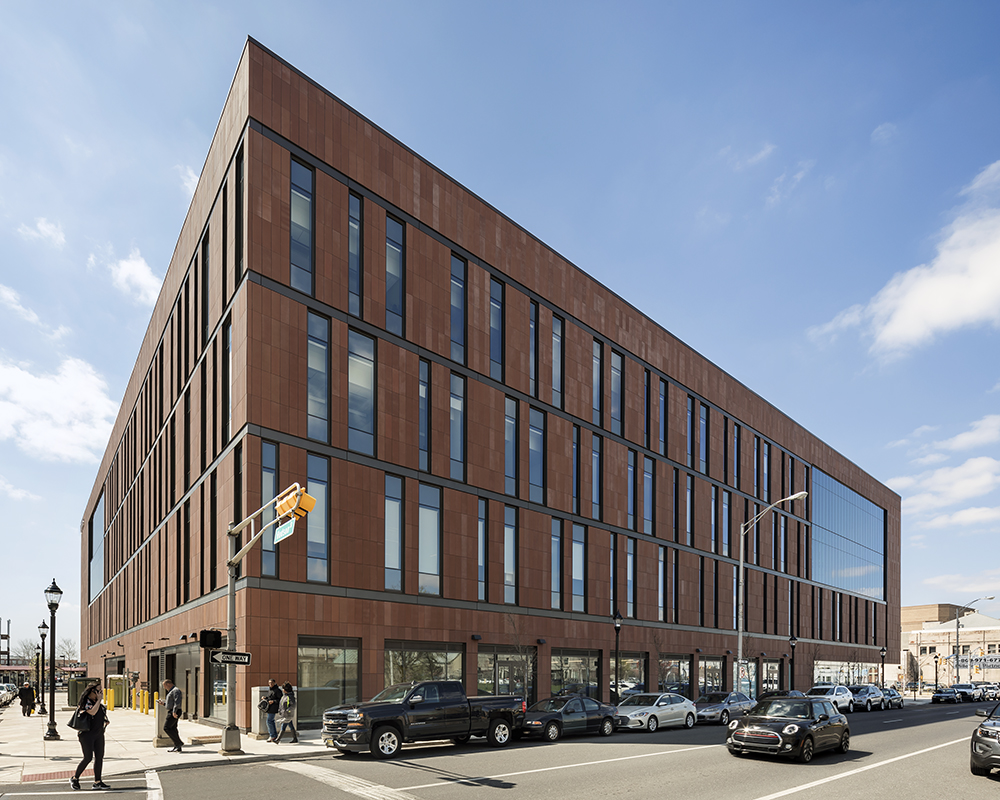 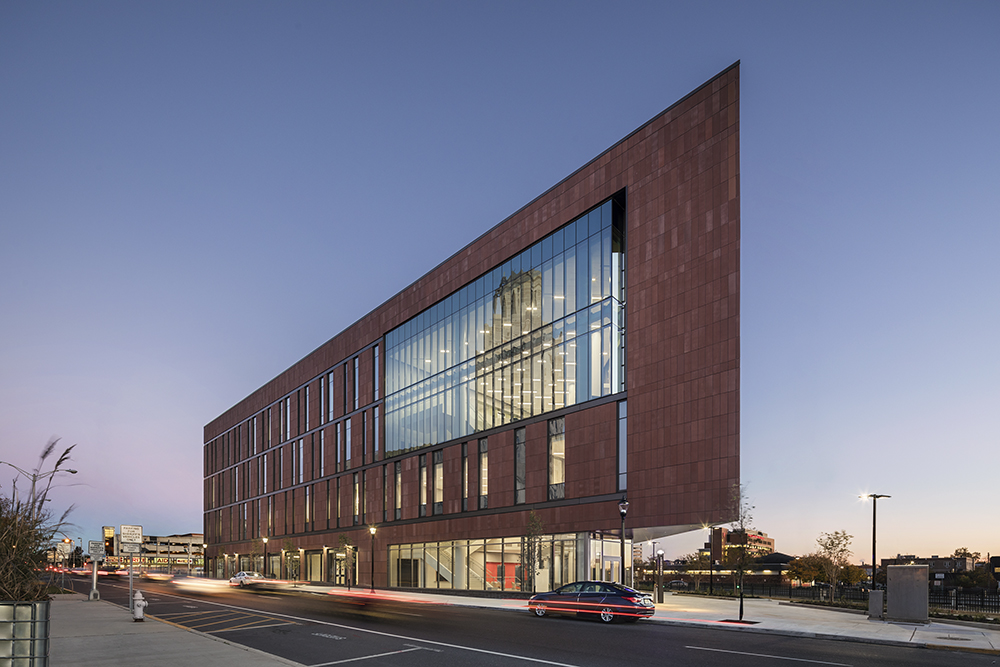 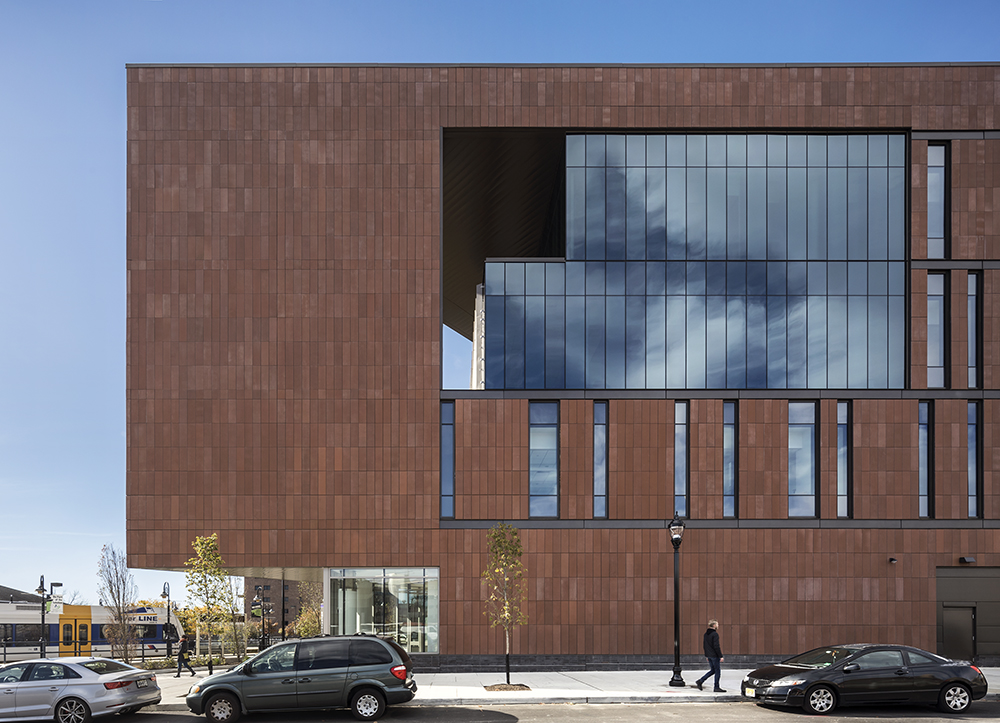 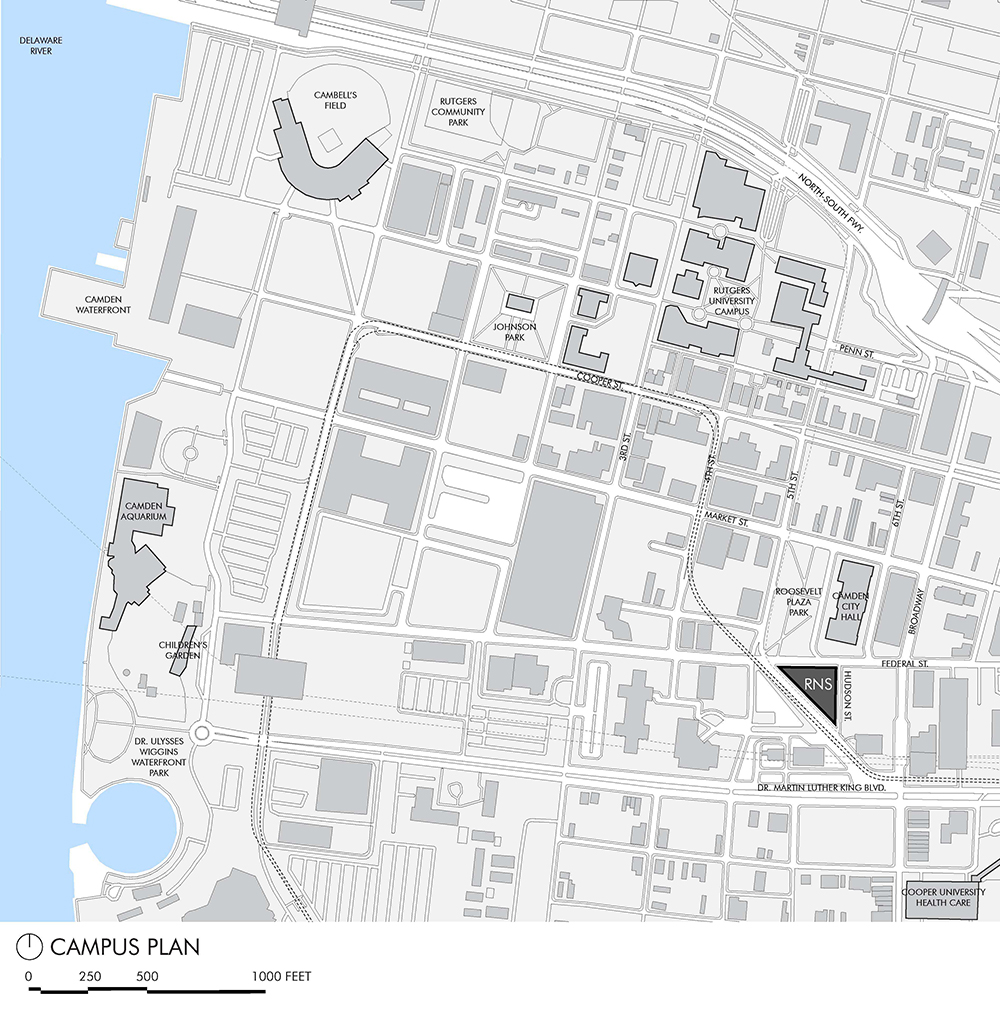 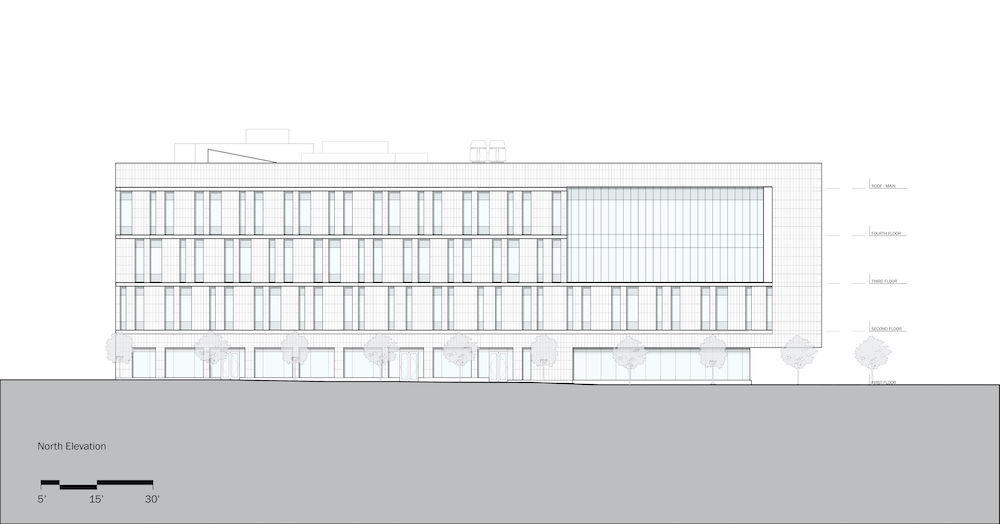 Completed in November 2017, the Perkins Eastman–designed School of Nursing and Science Building occupies a former parking lot in downtown Camden, establishing a new institutional heart for Rutgers University in the slowly reviving city. The design inhabits a formidable full-block mass, reaching a height of four stories with a multidimensional facade of high-performance concrete and glass curtainwall shaded by perforated panels.

Similar to other urban centers across the Rust Belt, Camden has undergone a significant period of economic stagnation and demographic decline since the mid-20th century. However, the continued expansion of healthcare institutions, such as the Nursing and Science Building, is fundamentally reshaping the city’s character.

The project is located on a triangular site adjacent to Camden City Hall, and the residential neighborhood of Lanning Square. Owing to the irregularity of the site, each elevation of the 101,000-square-foot project is a different length. Rather than attempting to establish conformity across the Nursing and Science Building, Perkins Eastman’s design plays with each facade’s unique dimensions. The southwest elevation features a hollowed-out frame filled by a three-story glass facade, while the northeast elevation recalls the more traditional masonry punched window style found around the area.

For the rainscreen, Perkins Eastman turned to TAKTL, a design and manufacturing operation located in the Greater Pittsburgh Region, to produce rectangular high-performance concrete panels. To blend in with the prevailing use of stone ashlar and brick for historic buildings in downtown Camden, the concrete panels are colored reddish-brown and finished to resemble non-glazed terra-cotta. The panels, measuring one-by-three feet, are face-fastened with color-matched screws to the light-gauge structural steel stud framing.

While the rainscreen serves as an oversized framing device, the bulk of the 110,000-square-foot project resides behind glass curtain wall. Sections of the curtain wall bulge from the assembly, providing room for a variety of functions within.

“The facade is composed of two distinctive wall types,” said James Butterfield, RA, design Principal at Perkins Eastman. “One which employs a full-height, vertical perforated metal shading system, and a second which introduces opacified shadowbox panels to minimize the quantity of unshaded vision glass.” Each curtainwall module reaches a height of 30 feet and is anchored at the end of each concrete slab. Aluminum brackets project from the Kawneer-produced wall system and are fastened to the 1/4-inch-thick vertical perforated panels at four points. The overall goal of these devices is the mitigation of solar incidence and internal glare associated with typical large-scale curtain wall design.