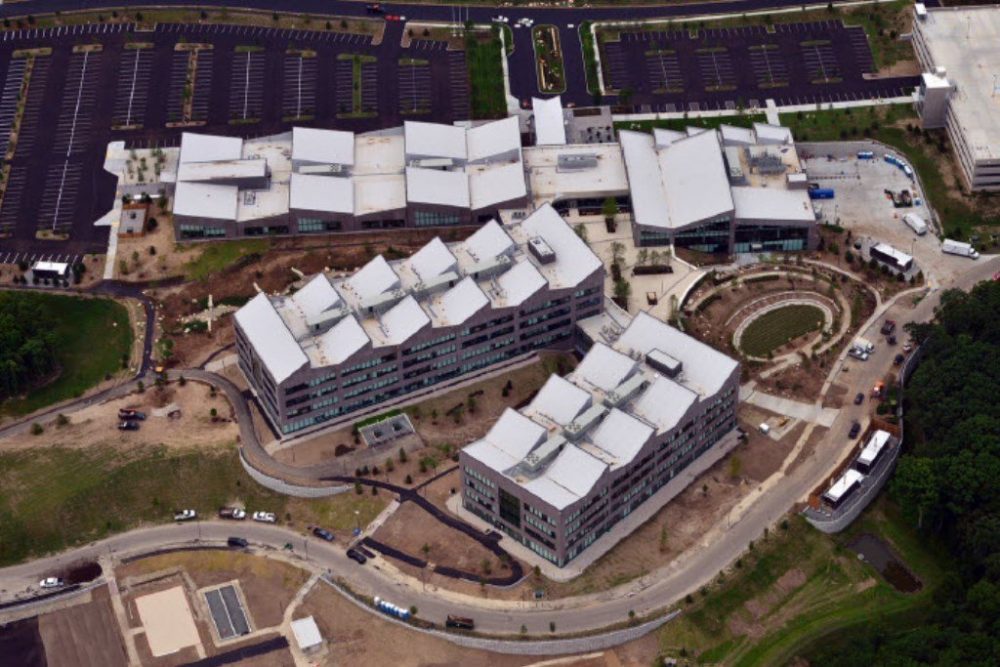 <
►
>
The massing is formidable and is intended to resemble New England's vernacular architecture. The UHPC panels take on the complexion of weathered wood. (Evan Joseph)

For the massing and design of the complex, Elkus Manfredi sought to evoke the historic barn vernacular of New England. All of the buildings are fairly low slung, and range in height from two-to-four stories. The bulk of the elevations are clad with light-gray cementitious boards produced by Envel that, from a distance, resemble oversized and weathered shingles or vertically-oriented wood cladding. The boards themselves are all a standard width of 12 inches and reach a height of up to 15 feet, although the latter varies to accommodate sloping roofs and parapets. The panels are fastened to the steel structure through a steel girt and two layers of steel angled brackets.

“The design team decided to use cementitious boards based on its ability to achieve this appearance. But inherent in this agricultural aesthetic are imperfections, and those imperfections caused some issues with tolerances—both with the thickness of the boards themselves as well as the backing with its insulation and steel angles and girts,” said Elkus Manfredi Architects. “There was concern about the aesthetics with these variations, but in the end, they contributed to the look that had been envisioned all along.”

The rooflines of the five structures are the most striking visual element of the campus. From a side profile, the peaks and depressions of the parapets form a series of imposing and concentric gables. Each peak of the gable hosts a yawning sawtooth skylight, which effectively daylights stretches of office space below. On certain elevations, glass is the primary facade element and is framed by narrow bands of the cementitious board. The Solarban 70XL glass, supplied by Vitro, is mounted atop a curtainwall system fabricated by Graham Architectural Products.

In terms of transitions, the meeting point between the window and roof proved to be one of the most challenging aspects of the project. The initial vision was for the panels to project over the glass curtain wall as a screen, with the boards stopping at the roofline without any metal coping. Ultimately, the design and facade consultancy teams settled on a narrow coping to control moisture whilst maintaining the clear lines of the gabled roofline.