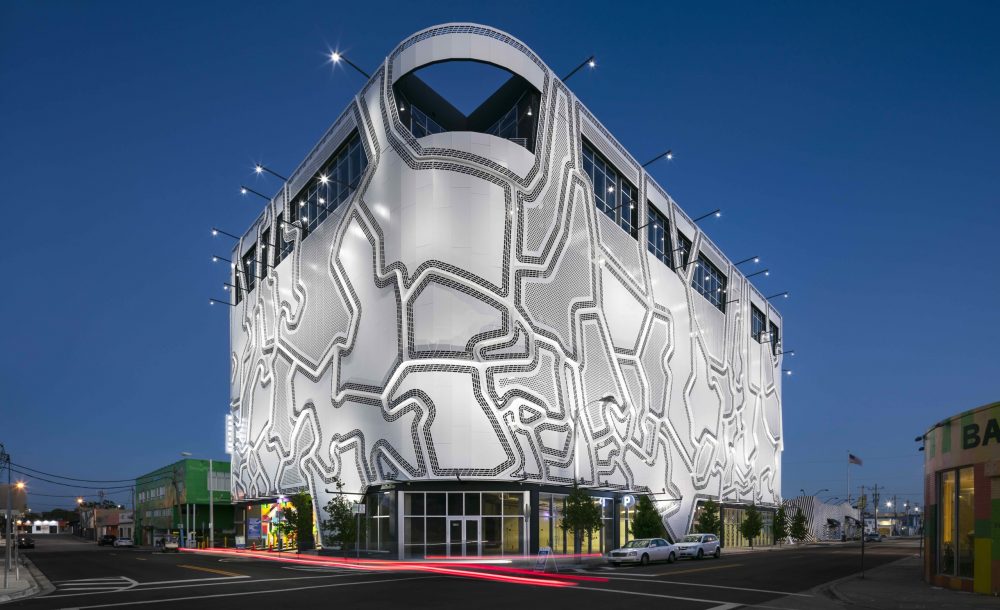 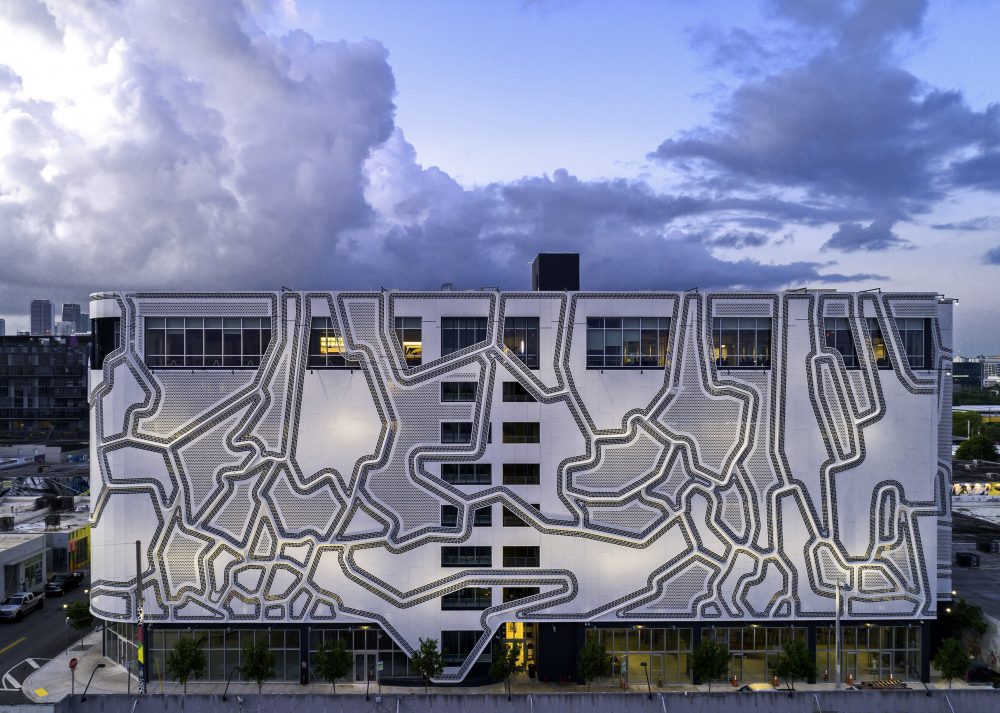 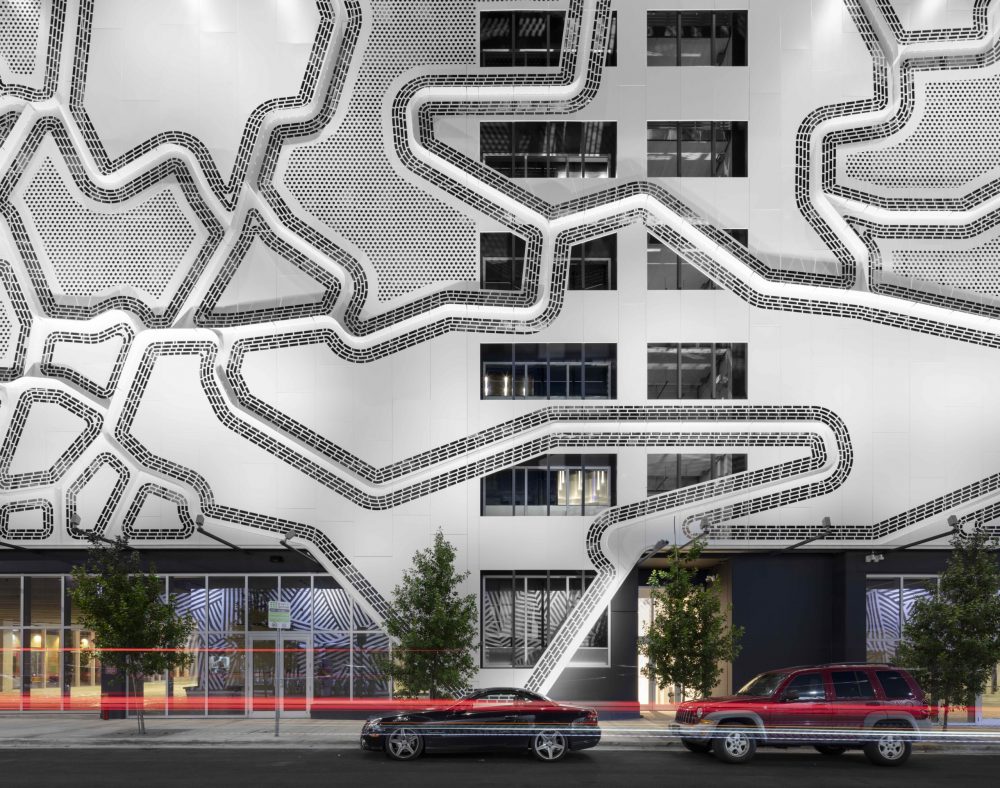 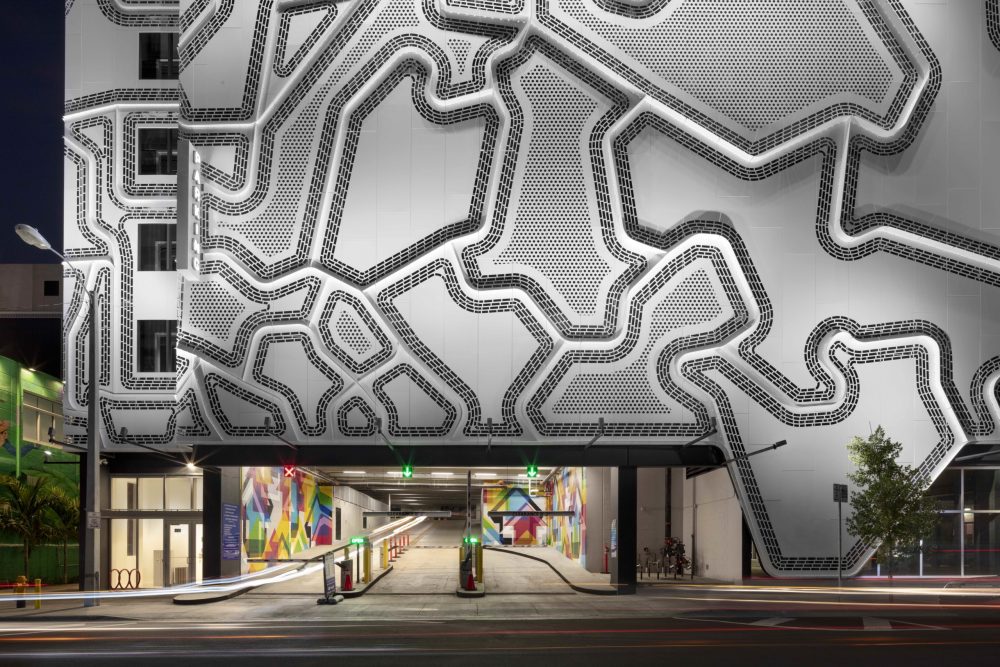 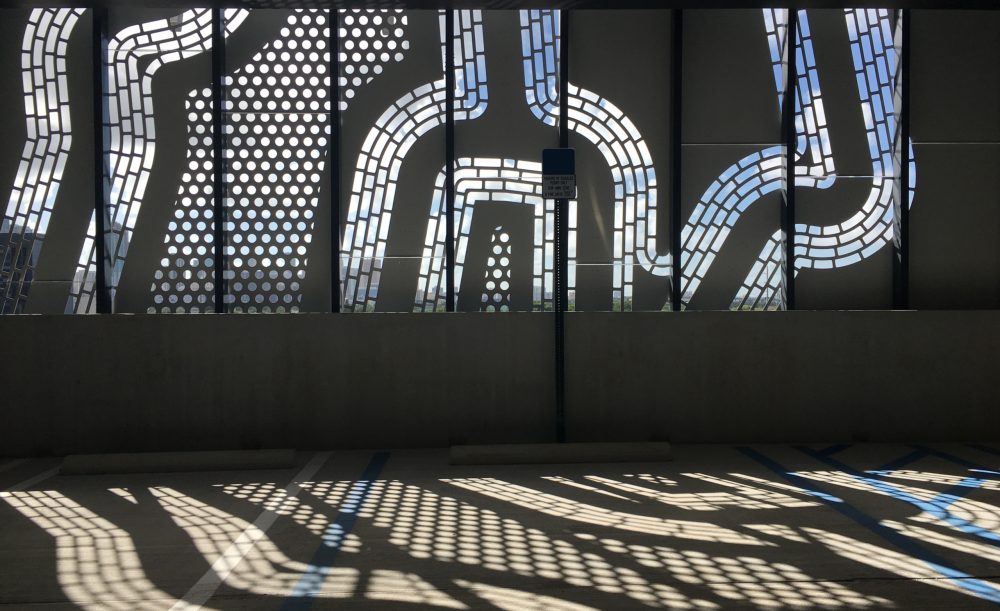 <
►
>
The facade is backed by a custom-developed system of vertical mullions, and functions as a weather barrier. (Golden Dusk Photography)

The revival of cities across the United States is fundamentally reshaping streetscapes across the country, with dense developments sprouting from barren lots and pedestrian-oriented spaces usurping what were vehicular realms. In a semi-paradoxical twist, the transformation of the American city has also delivered a reappraisal of the ubiquitous parking garage. And while the aesthetic treatment of parking garages is a nationwide trend at the moment, Miami has proven to be something of a leader in this area with high-design projects led by WORKac, OMA, and Jean Nouvel. The Wynwood Garage, designed by Oakland-based Faulders Studio and Wolfberg Alvarez & Partners, joins this scene with a facade of vividly perforated aluminum.

Wynwood Garage rises to a height of eight stories and holds retail spaces at the ground floor, offices on the top floor, and parking sandwiched in between—all together totaling approximately 250,000 square feet.

For Thom Faulders, founder of Faulders Studio, the challenge and objective of the project was to enmesh a large-scale architectural intervention within a streetscape and have it resonate locally—the neighborhood is embellished with a range of street murals and still populated by scrappy light industry. “For the building skin I wanted to scramble, re-align, and interrogate the perceived scale of this new large block-sized building,” said Faulders. “Instead of ‘ambiguous functionality,’ where use and program can be open-ended, the facade design relies on ‘functional ambiguity’ to achieve its scale-shifting effects.”

It comes as little surprise that manufacturer Zahner was the outfit behind the facade’s fabrication: the Kansas City operation has expertise in delivering highly-customized metal building enclosures across the country, and world. The pattern, laid over 1,500 unique panels, is akin to a geographic abstract—raised and curved borders are flanked by rows of cylindrical perforations that give way to islands of circular perforations. Protruding elements extend between three-and-ten inches from the facade, and consist of two plates welded into a T section and riveted into position on site. Backing the entire facade is a system produced by Zahner consisting of integrating hooks which are fastened to vertical support mullions; each mullion is custom-slotted by a CNC mill to accommodate the wide range of panel height and widths.

Ultimately, the success of a project comes down to the receptiveness to bold ideas by both the developer and city authorities. “We were given full support by the client, and as well by the city design review board,” continued Faulders. “They foresaw that the visual and urban connections we were fostering with the facade would sync with the integrity of the Wynwood Arts District.”