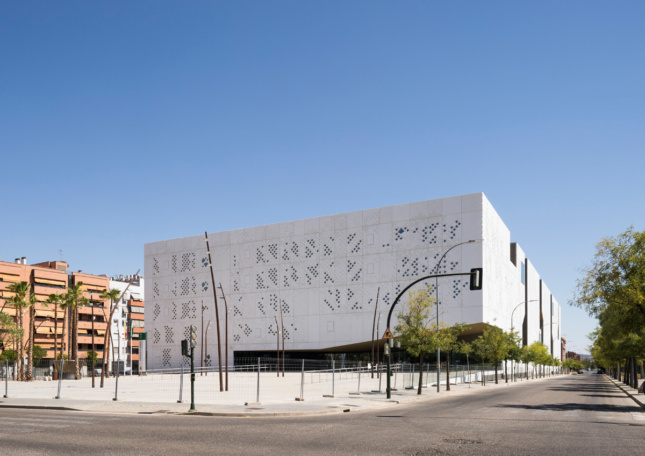 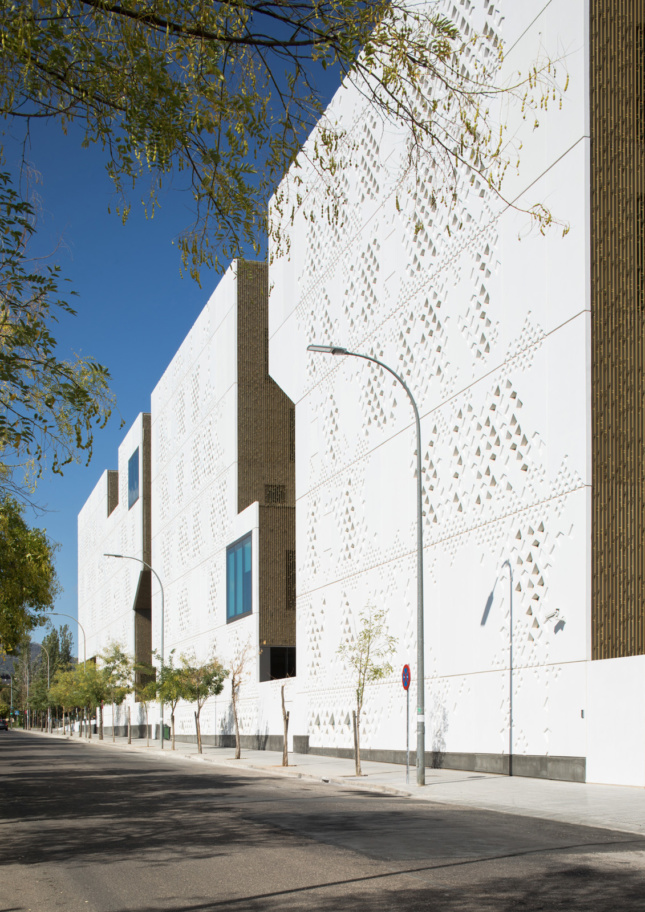 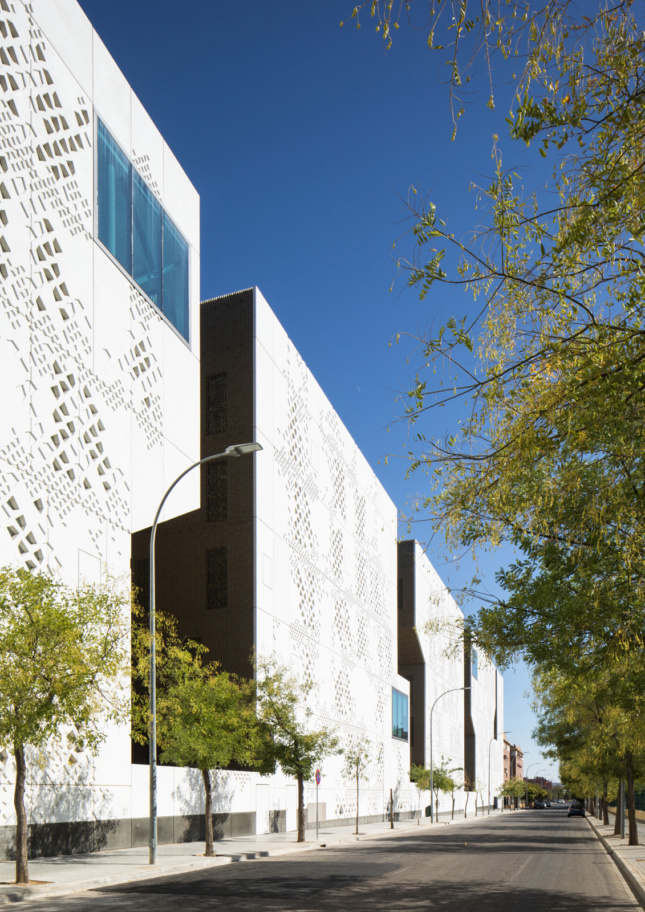 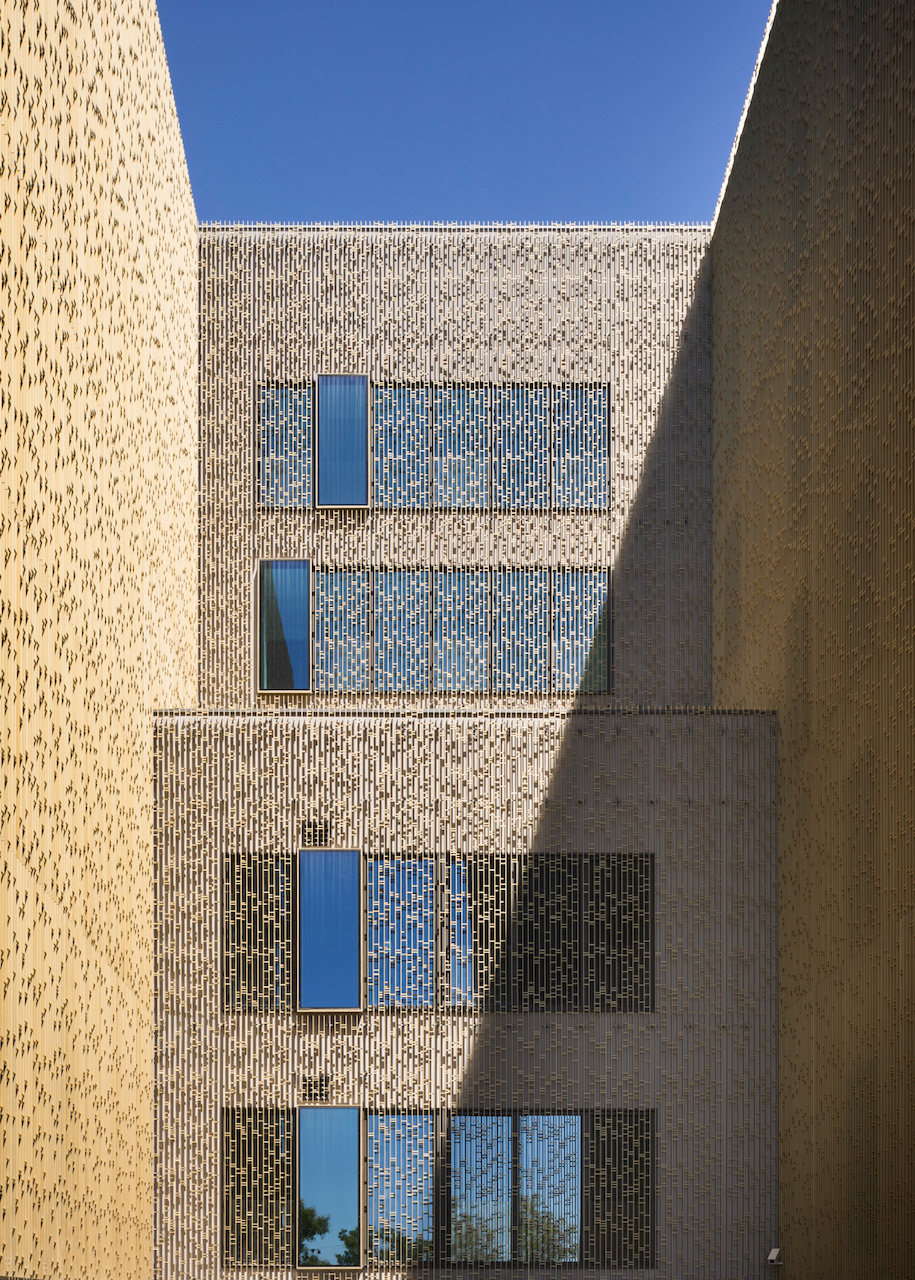 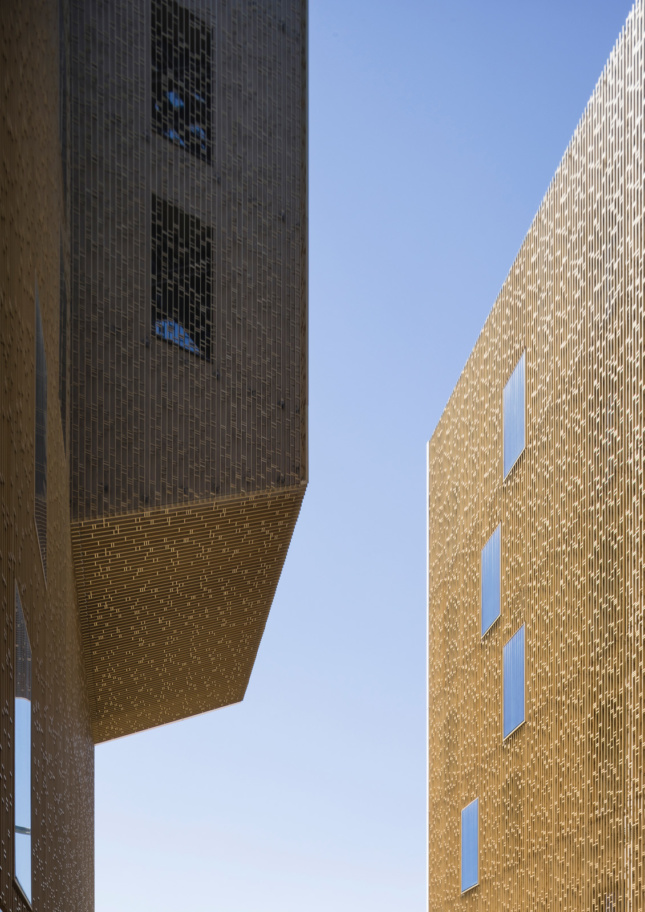 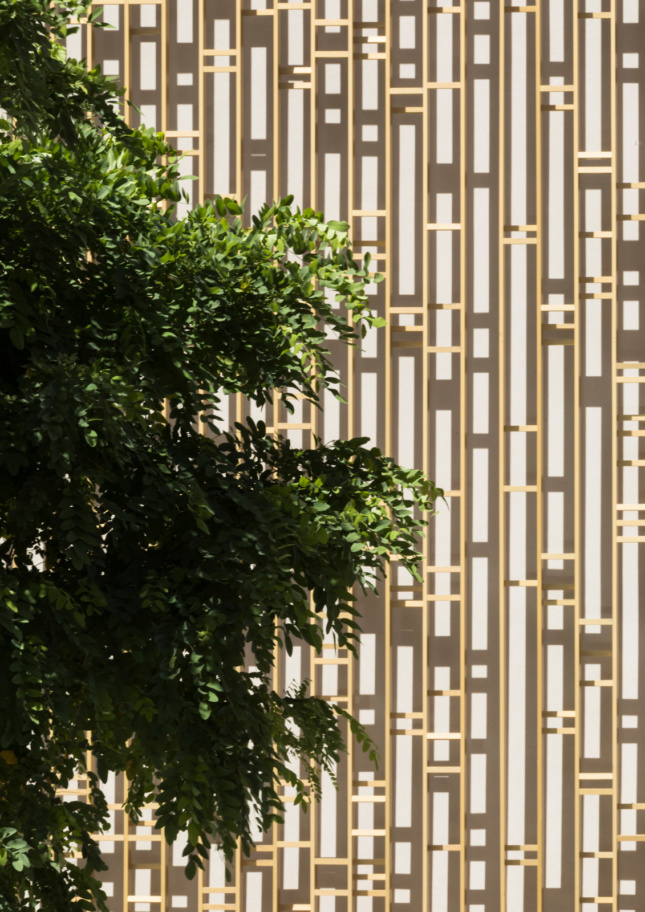 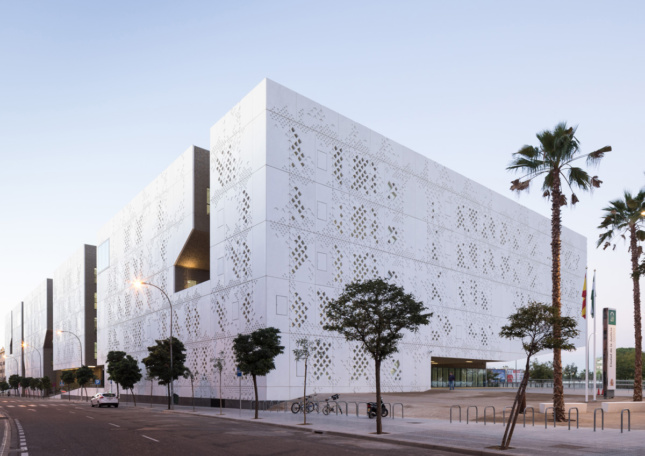 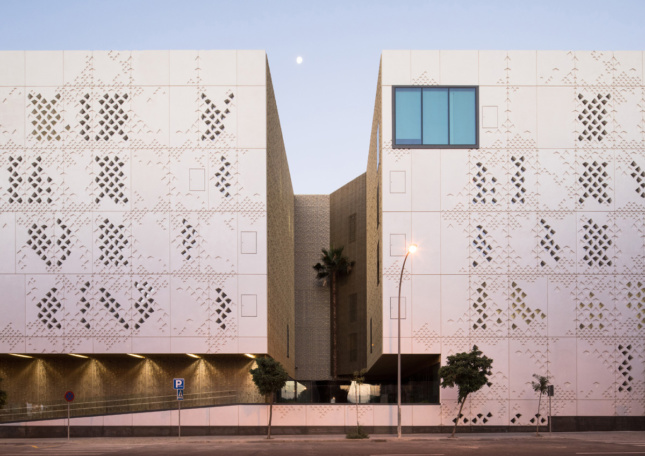 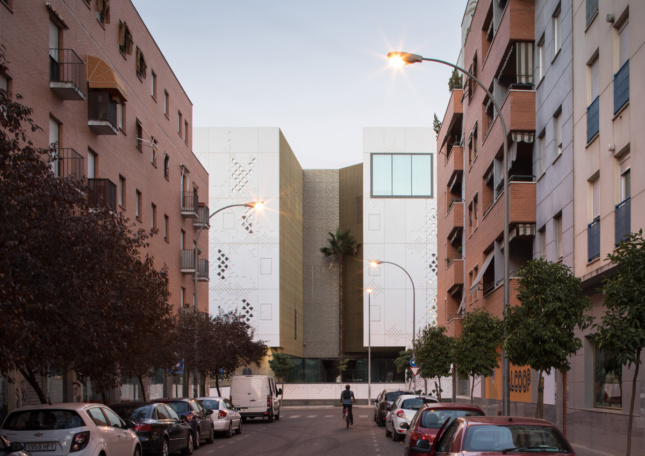 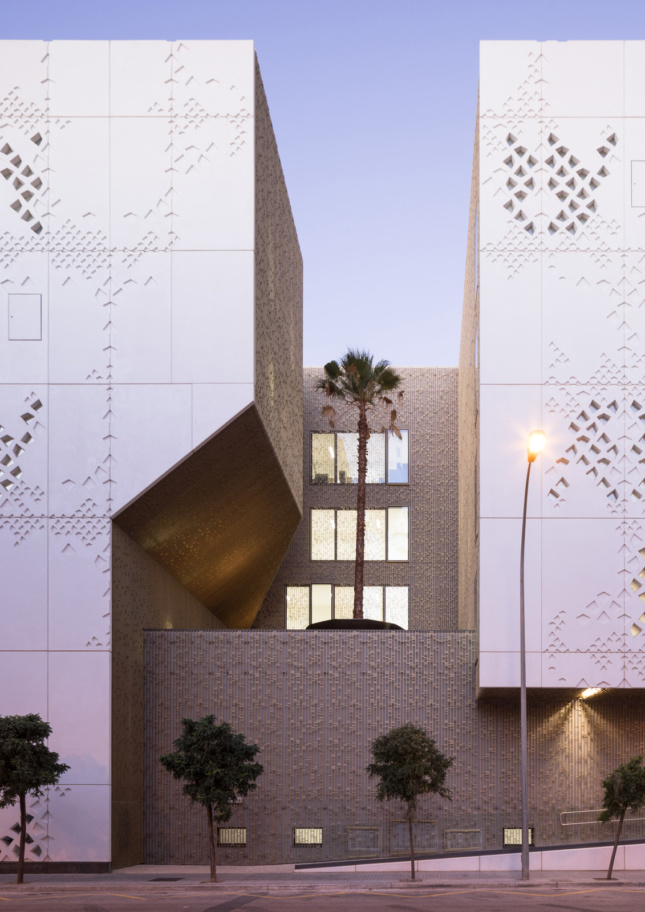 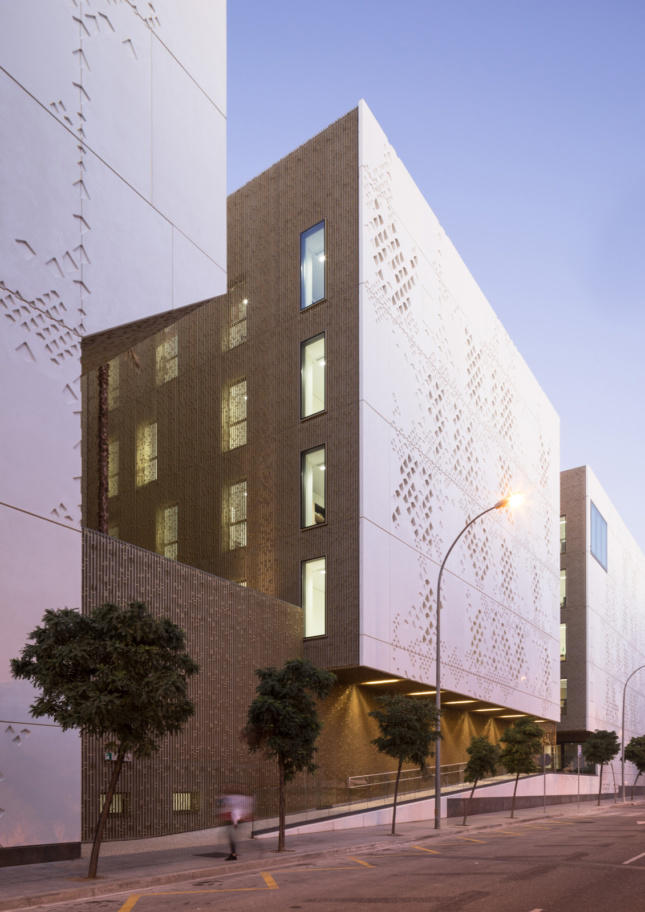 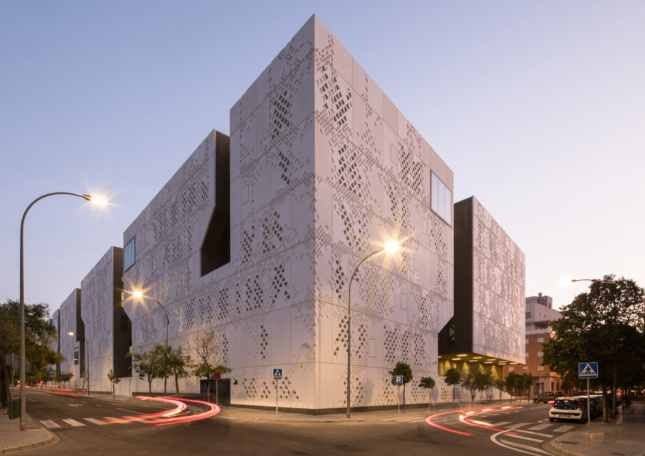 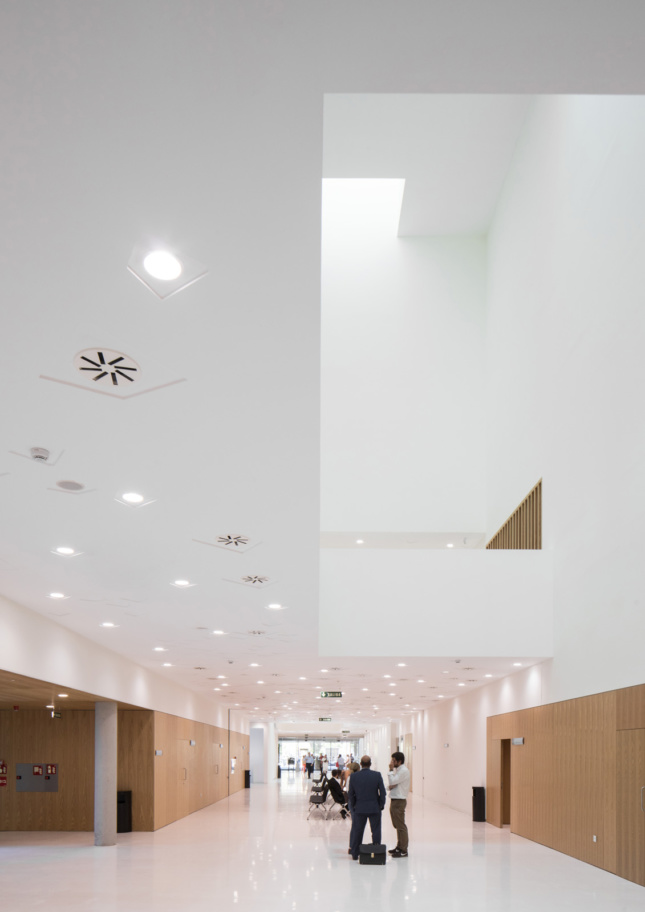 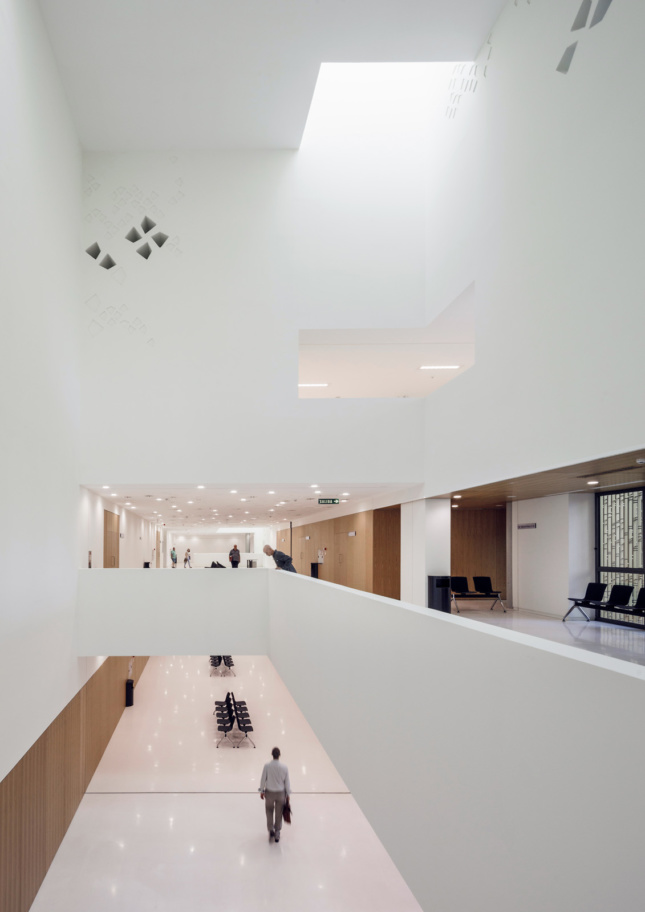 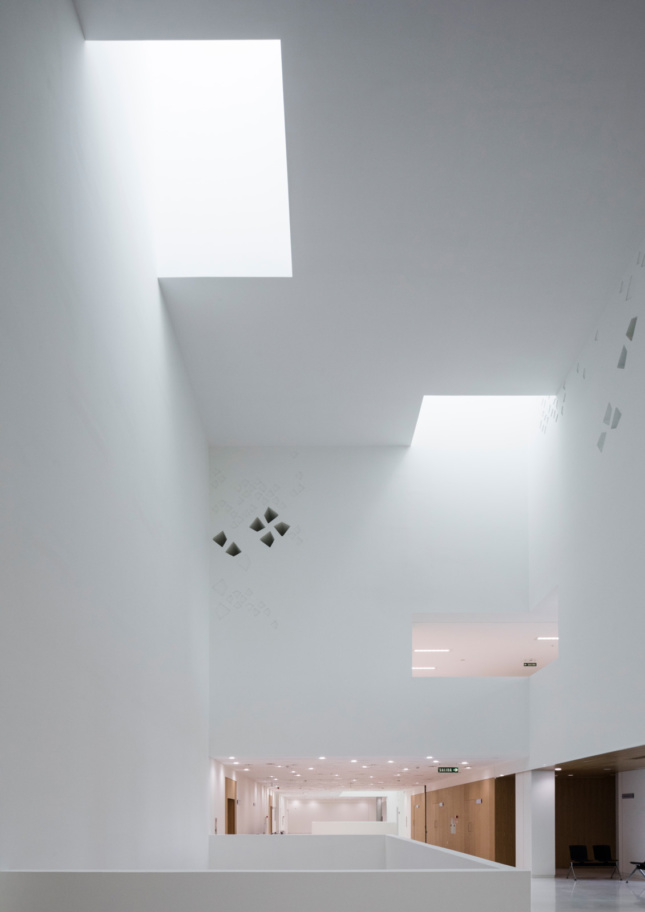 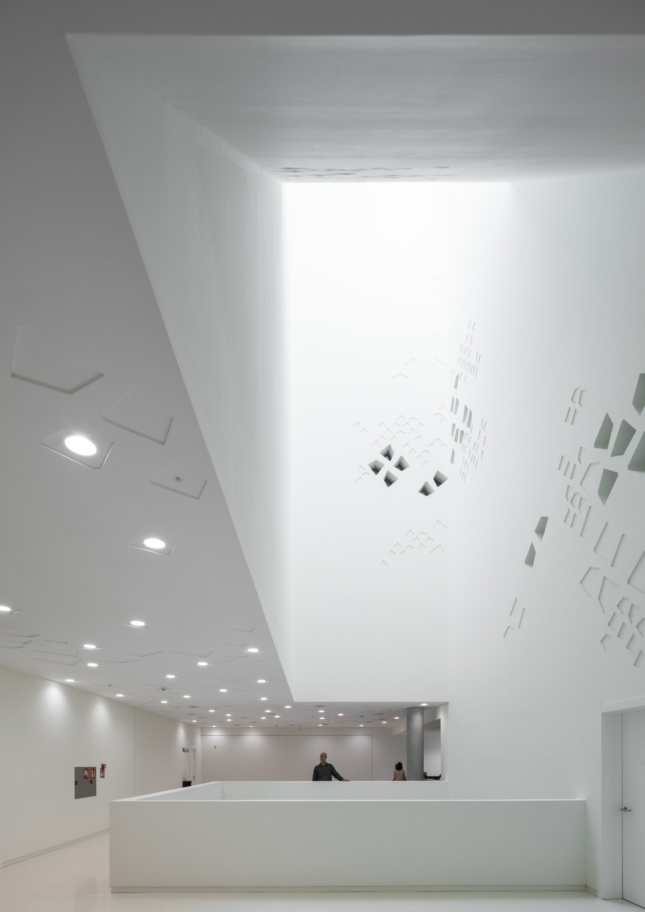 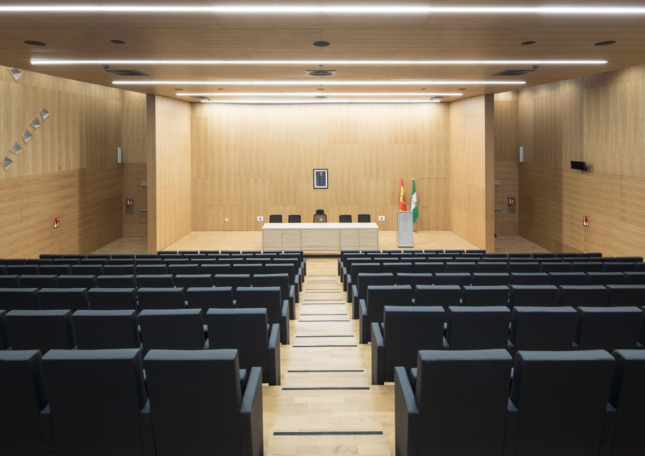 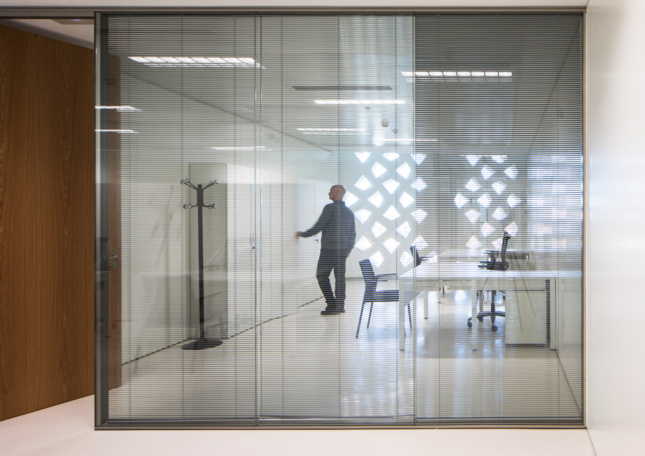 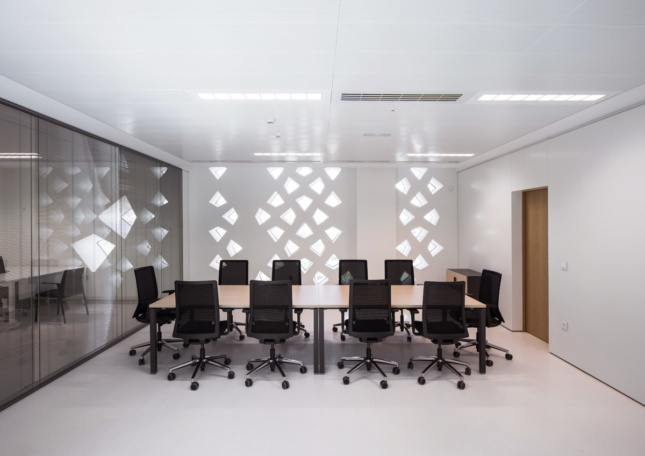 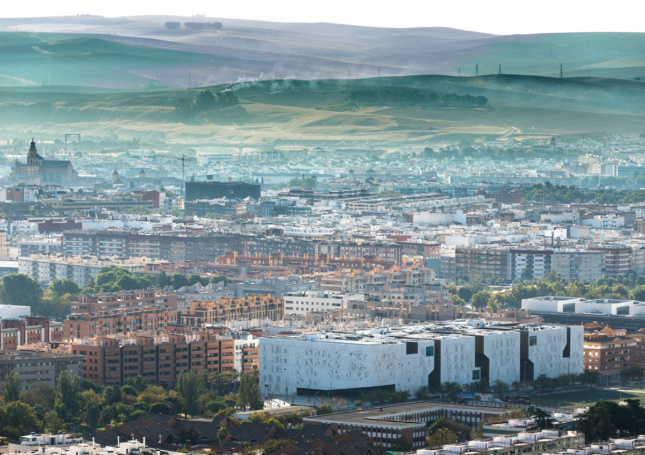 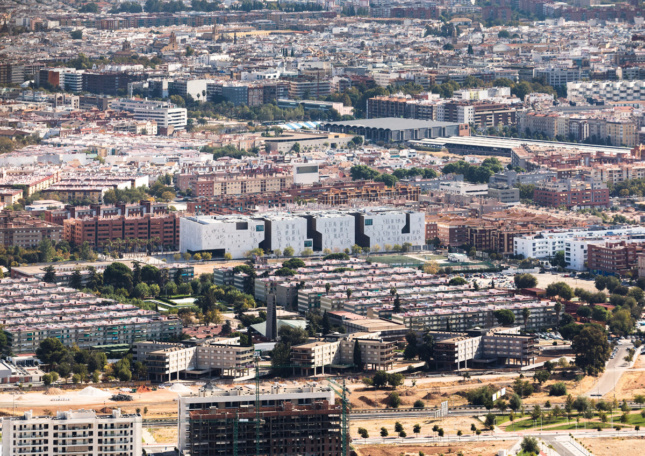 Constructed adjacent to a UNESCO World Heritage site, the new Palace of Justice in Córdoba, Spain delivers a contemporary take on the traditional courtyard typology and Moorish screening techniques found throughout the city. Led by Dutch firm Mecanoo and Spain’s AYESA, the 51,000-square-foot super dense project was initially awarded after a competition in 2006, and after a long delay, it was designed and built from 2014–2017.

The exterior cladding is responsive to large massing blocks that accommodate deep courtyard recesses for daylight admittance. These voids in an otherwise imposing monolithic block doubly function as spatial dividers for various internal zones serving civic, judicial, administrative, and institutional spaces. The resulting semi-public patio spaces offer up an opportunity for admittance of natural light and ventilation deep into the core of the block, where a central circulation “spine” runs.

The cladding strategy is precisely coordinated with the massing of the building, relying on 33 versions of white glass fiber reinforced concrete (GFC) panels, articulated with a loose grid of punched window openings and recesses in the facade for texture. The depth of this system offers solar shading at glazed openings to help buffer the building’s occupants from southern Spain’s subtropical climate. A large cantilevered entry, and numerous courtyards, assist in the self-shading strategies of the building massing. A bronze-anodized aluminum lattice composed of vertical plates and horizontal tie rods clads the courtyard walls. These screens sit outboard of various window configurations to accommodate the office program beyond.

While the Córdoba city center is located south-east from the site, the building volume was condensed to create a generous ramping entrance square to the north which connects the Palace of Justice with the existing Huerta del Sordillo gardens. The building contains a courthouse with 26 courtrooms, a wedding room, a Forensic Institute, offices, a cafe, an archive, a prison, and a parking garage.

“One can say that the sustainability of the building is not achieved by expensive technological mechanisms but by an intelligent interpretation of the vernacular architecture,” said Mecanoo, referring to the unique shaping of their building, in a press release. “The massing strategy creates urban integration through fragmentation. It follows a similar strategy to the spontaneous growth process of medieval cities resulting in a volume which is carefully sculpted to adapt to the surrounding context. This results in a puzzle-like structure which hints its process of formation and emulates the experience of the dense historical center of Córdoba.”

Francine Houben, a founder of Mecanoo, will be delivering a keynote presentation at The Architect’s Newspaper’s (AN) upcoming Facades+ New York conference, a two-day event in mid-April focused on the design and performance of the next generation of facades. More information on the conference, along with registration details, can be found at facadesplus.com.