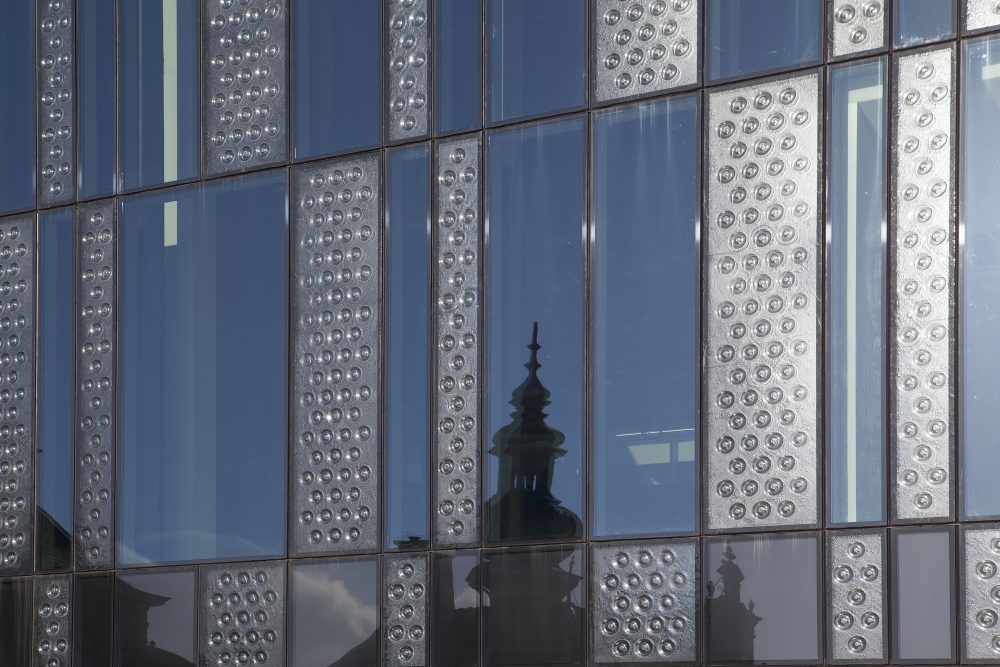 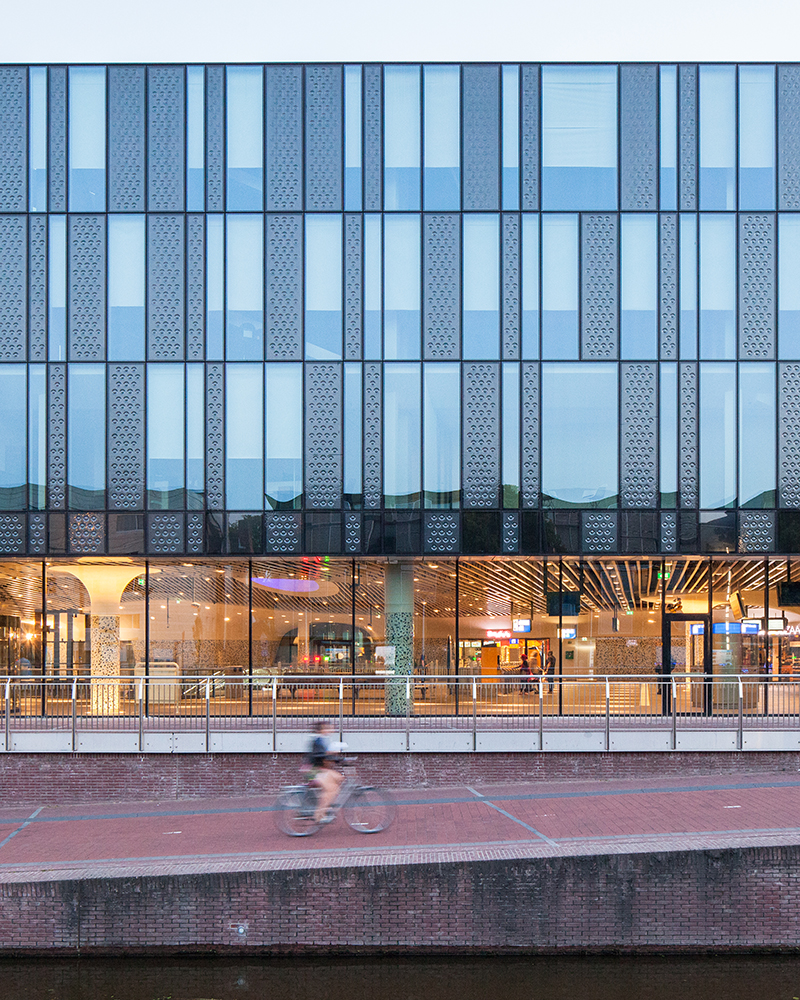 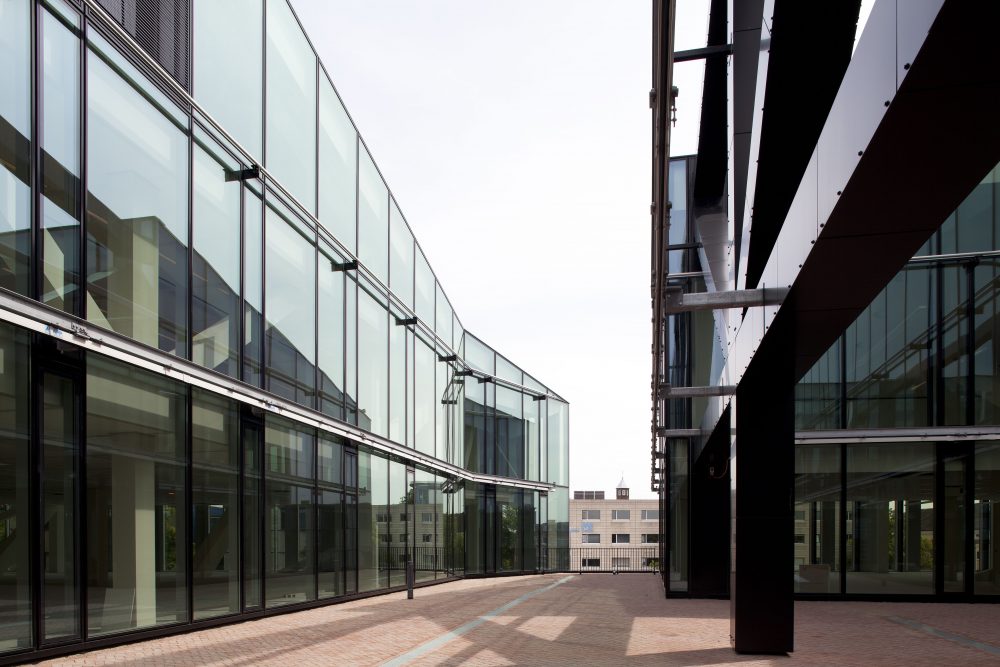 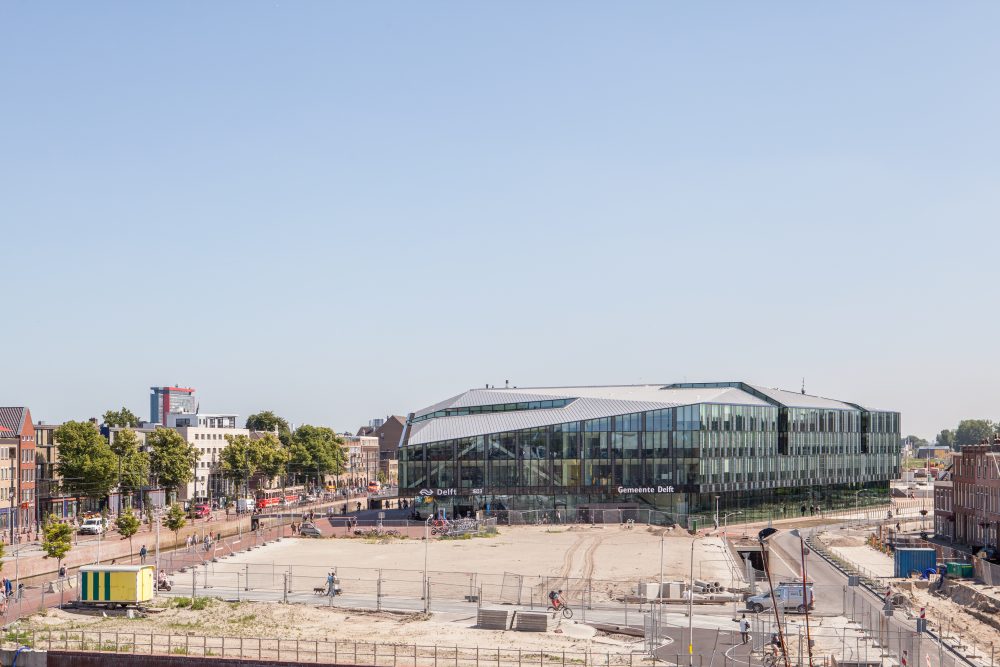 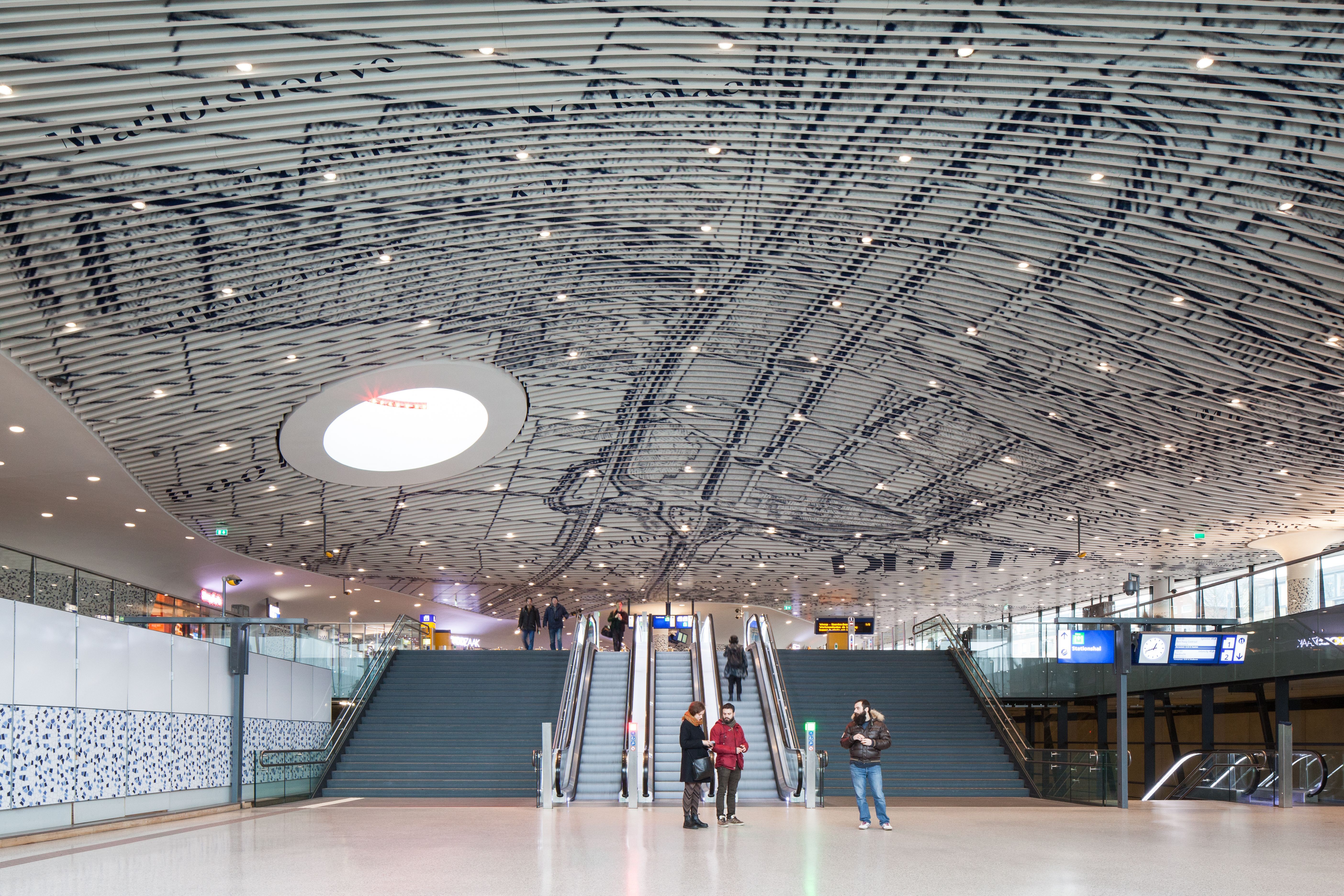 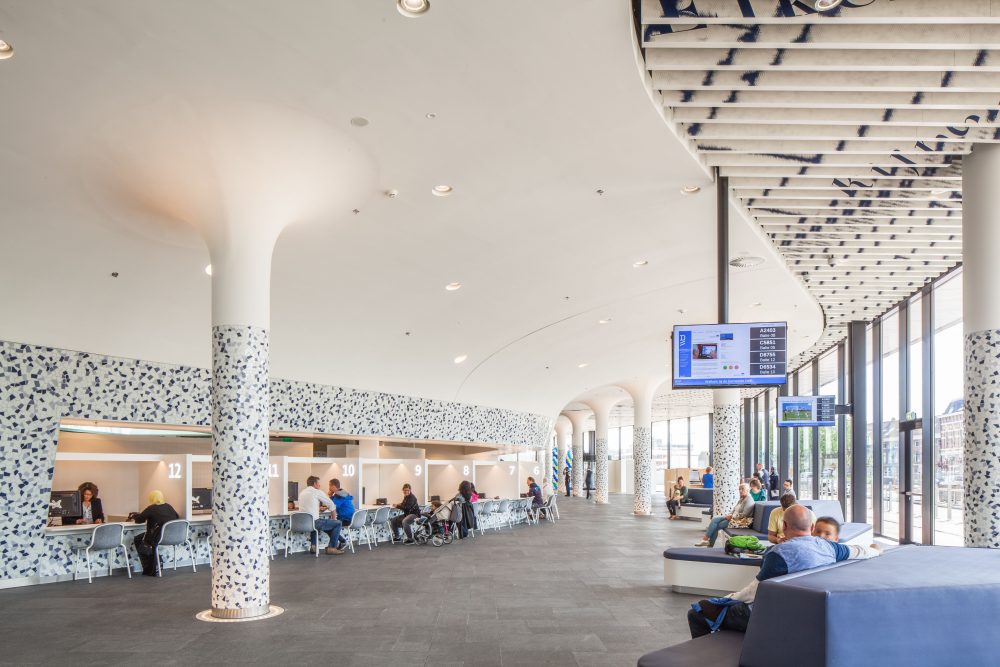 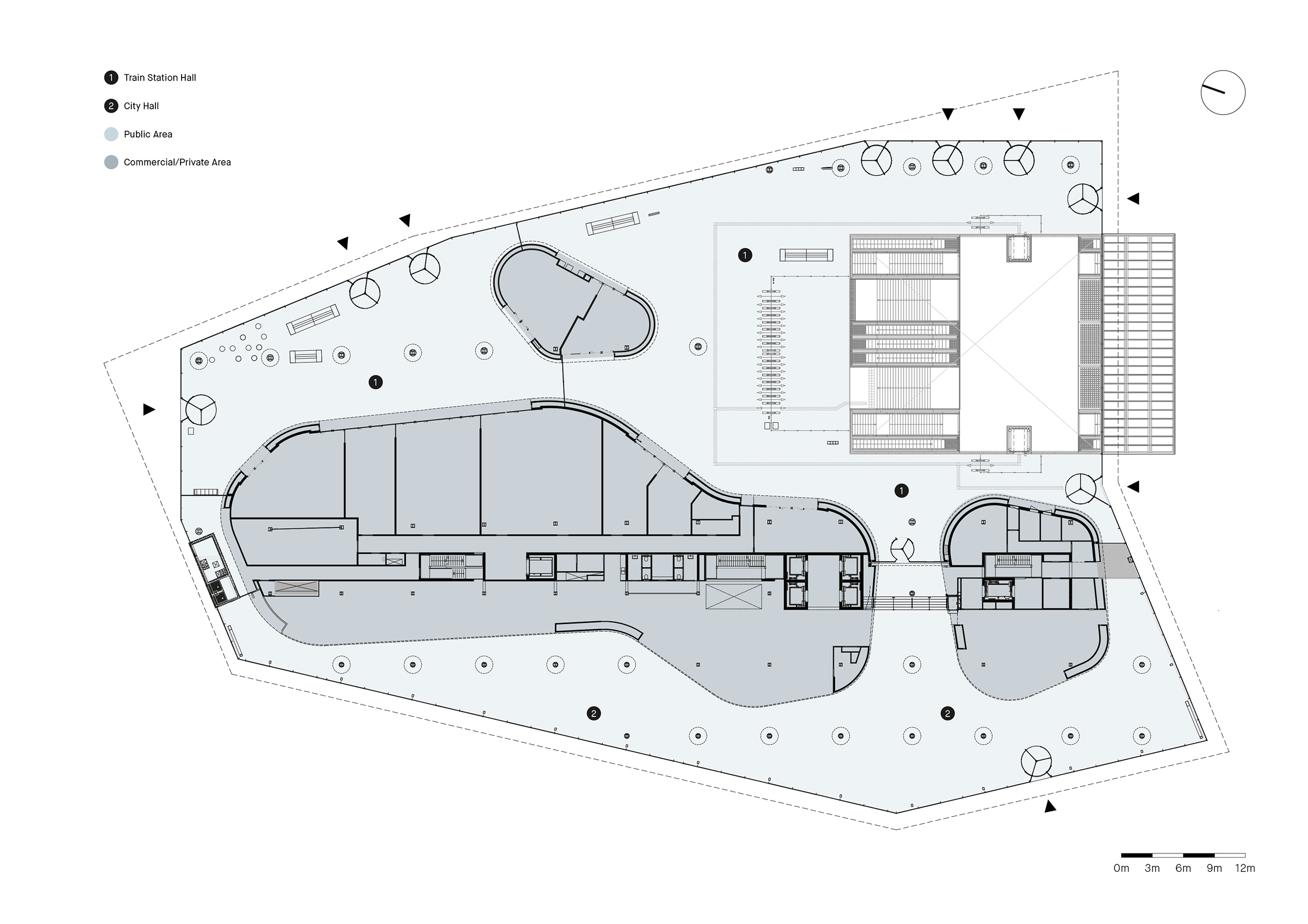 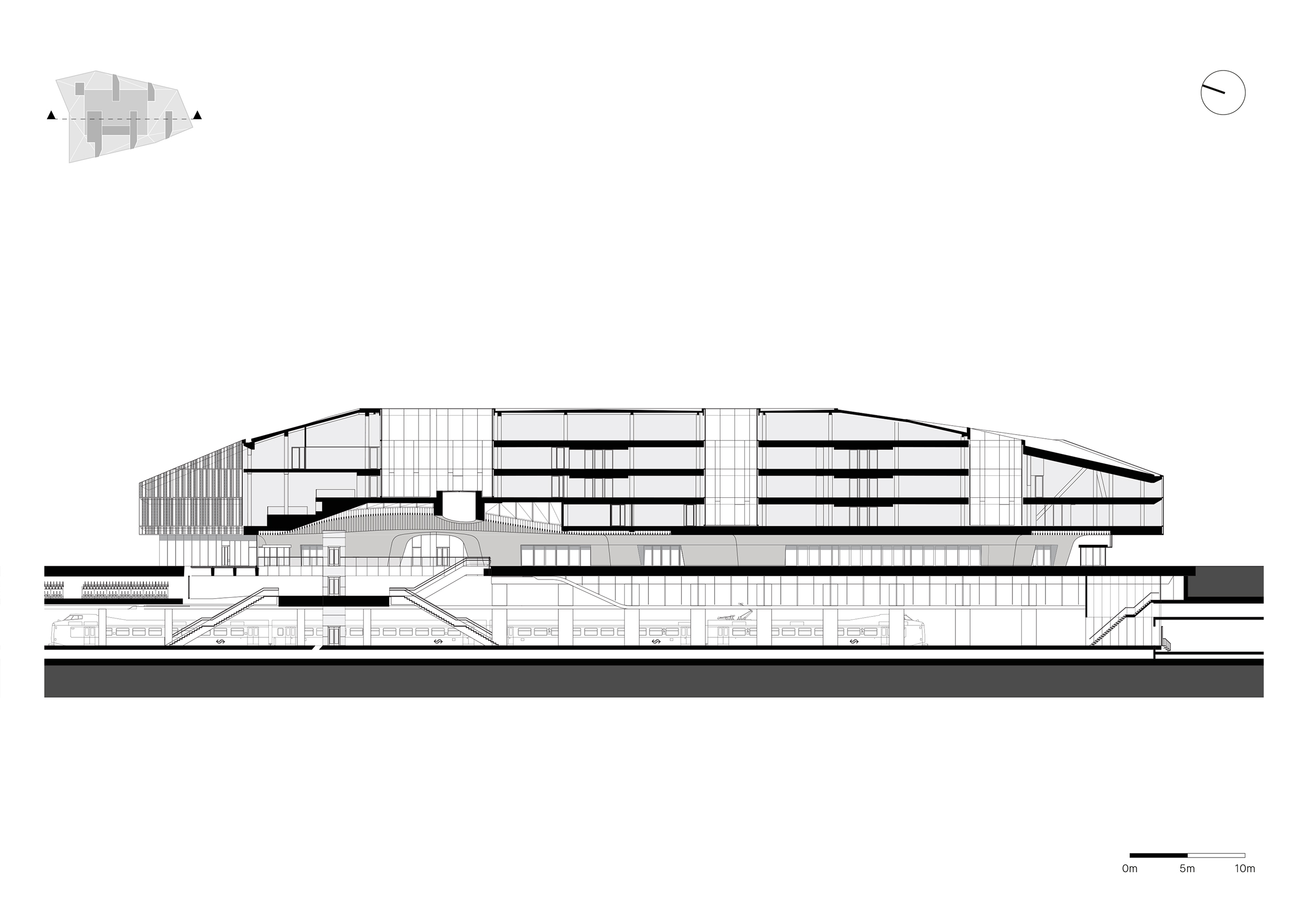 Constructed in the center of the canal-ringed Dutch city of Delft, Mecanoo Architecten’s new City Hall and Train Station conveys an up-to-date take on the city’s overarching morphology and history with an expressive glass facade and articulated massing.

Delft is located approximately 10 miles from the Port of Rotterdam, one of the world’s busiest, historically embedding the city within European and international trade flows. The city’s primary product was a style of tin-glazed ceramic dubbed Delftware, which largely consisted of blue detailing laid over white porcelain. Protected by relatively stringent architectural conservation regulations, the city still largely follows its centuries-old layout of narrow streets, plot lines, and modest building heights. The challenge for the architectural practice was to incorporate these elements into a 305,000-square-foot, state-of-the-art infrastructural hub and seat of government.

The complex rises from a vaulted and mosaic-tiled four-track train station, with the first floor largely serving as a conduit of circulation between the streetscape above and transport embedded below. Floating above the station’s principal concourse are approximately 2,000 425-foot-long curved ribs printed with a historic map of the Delft region in 1877.

The glass panels are primarily a single height of approximately 11.5 feet, with varying widths of 1.5 to 3 feet. Each panel was glazed a soft blue in homage to eponymous ceramics formerly produced in Delft. Working with curtain wall fabricator AKS Bouw, the design team utilized a custom-designed aluminum framing system, hanging each facade element from the interior with a specialized hook.

For fabrication and glazing of the glass panels, Mecanoo Architecten collaborated with specialist St. Gobain. Kiln forming was used to imprint street-facing panels with their lens-like spheres, a vernacular detail commonly found within the city.

According to the design team, this kiln forming process is fairly straightforward: “a regular sheet of float glass is heated and put over a mold containing holes for the heated glass to drop into, the ripple effect is formed by a nose that sits at the center of the hole.”

From the second story, the structure rises as an irregular glass mass measuring nearly 50,000 square feet in surface area. Mecanoo used two strategies to relate the complex’s volume to the city-at-large: deep incisions punctuate the east and west elevations of the street wall recalling the city’s network of alleyways and courtyards, while the roof gradually slopes downward towards each corner to match surrounding cornice lines.