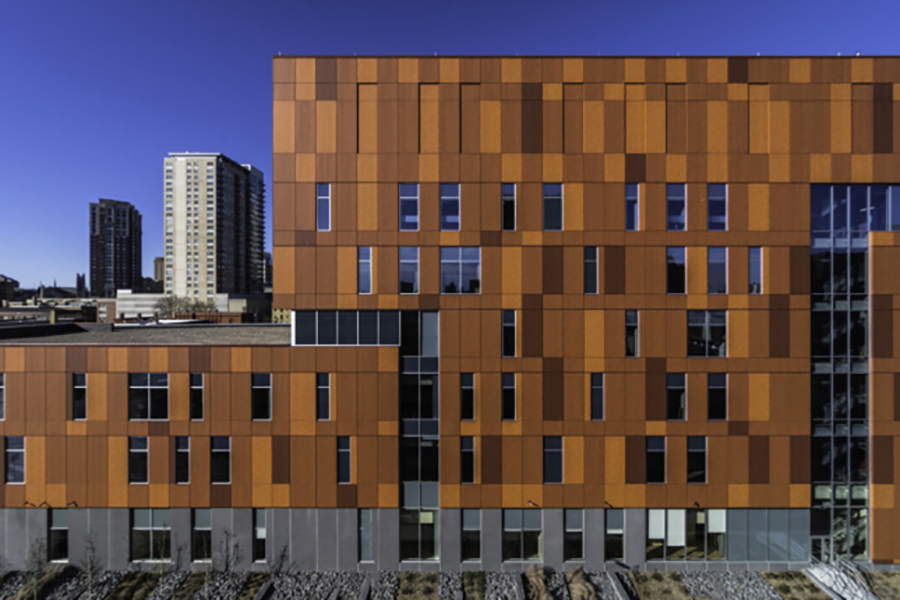 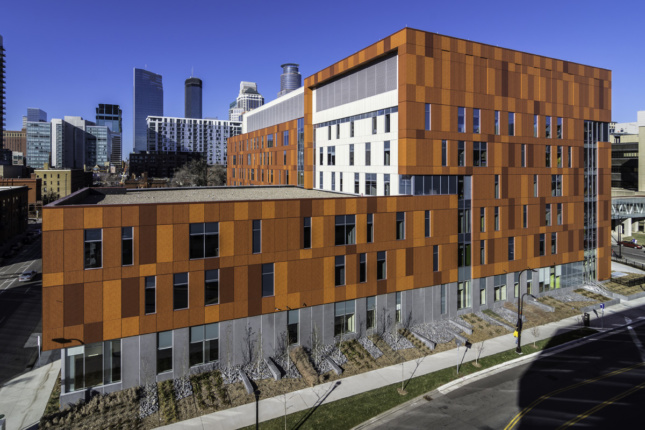 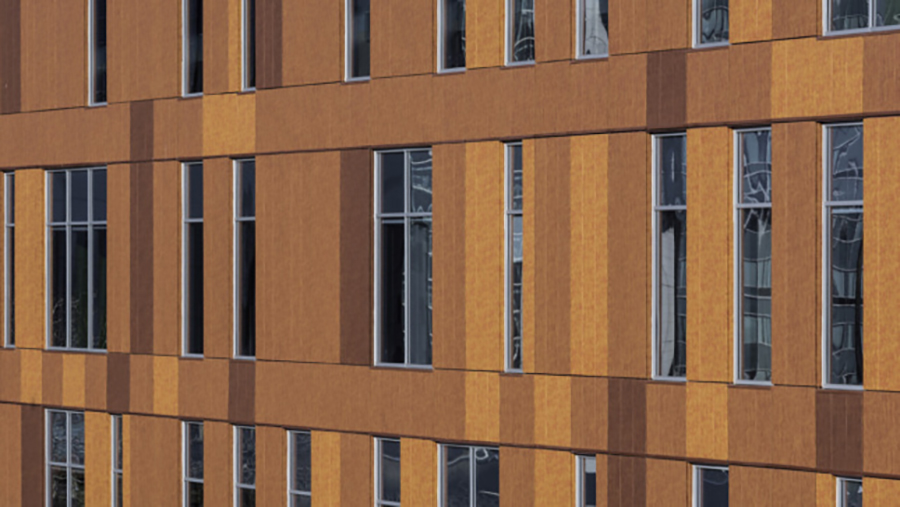 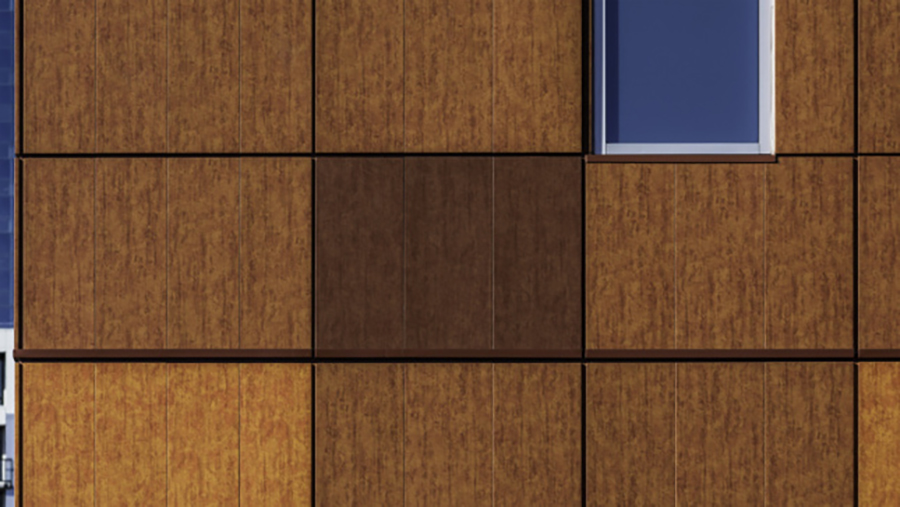 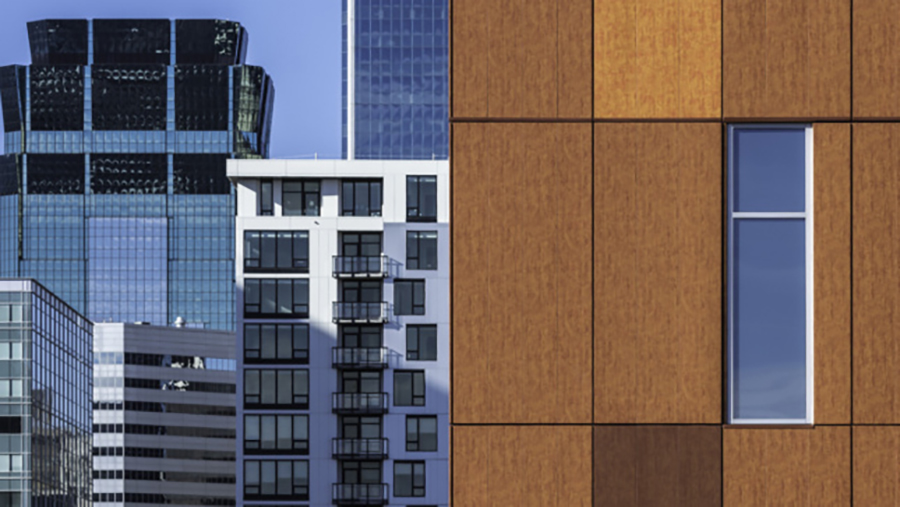 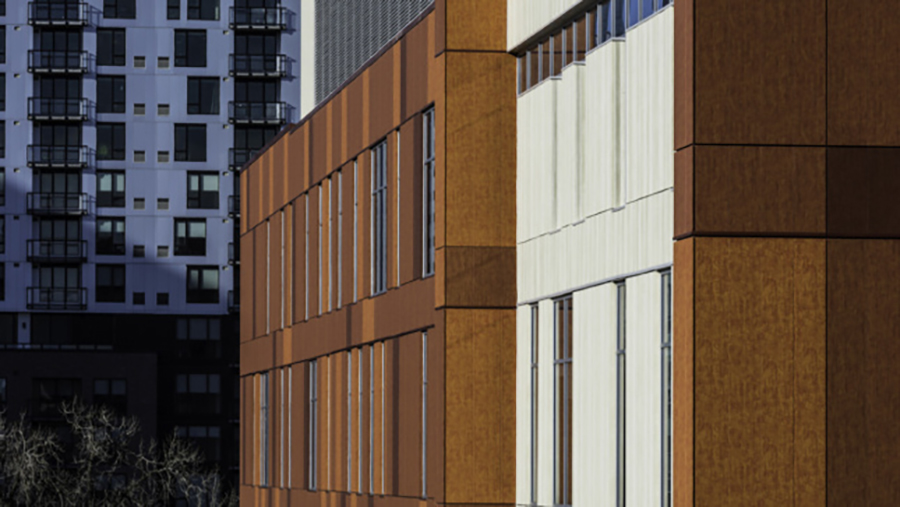 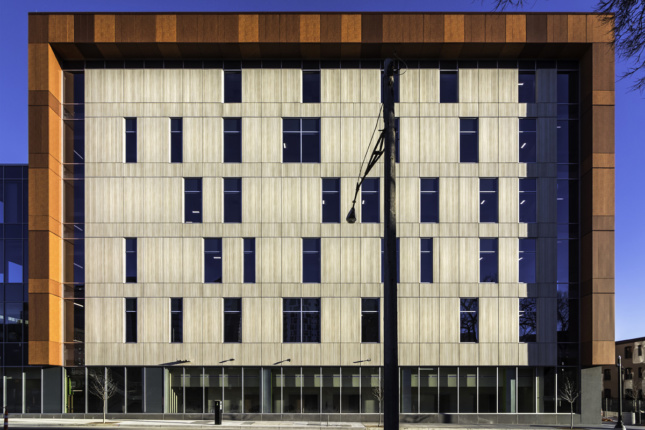 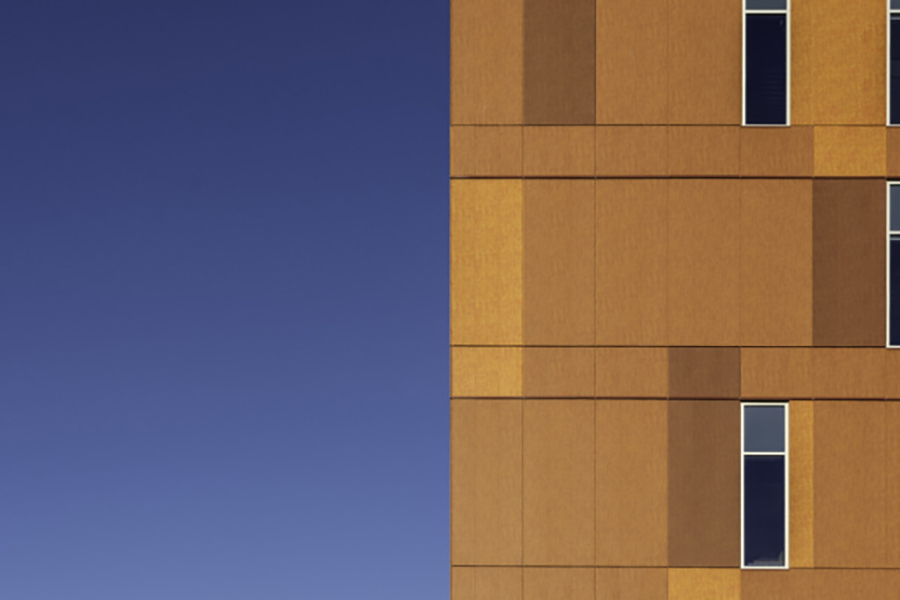 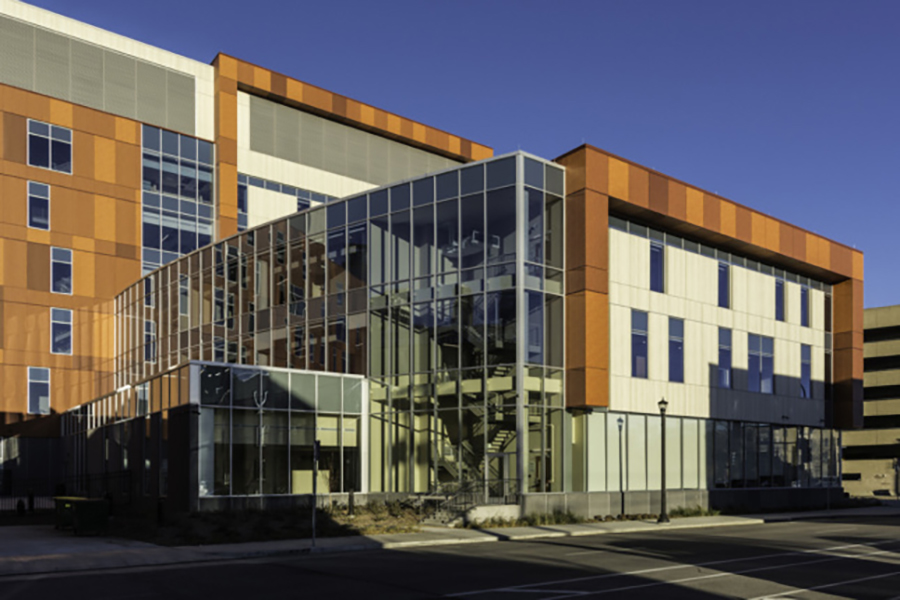 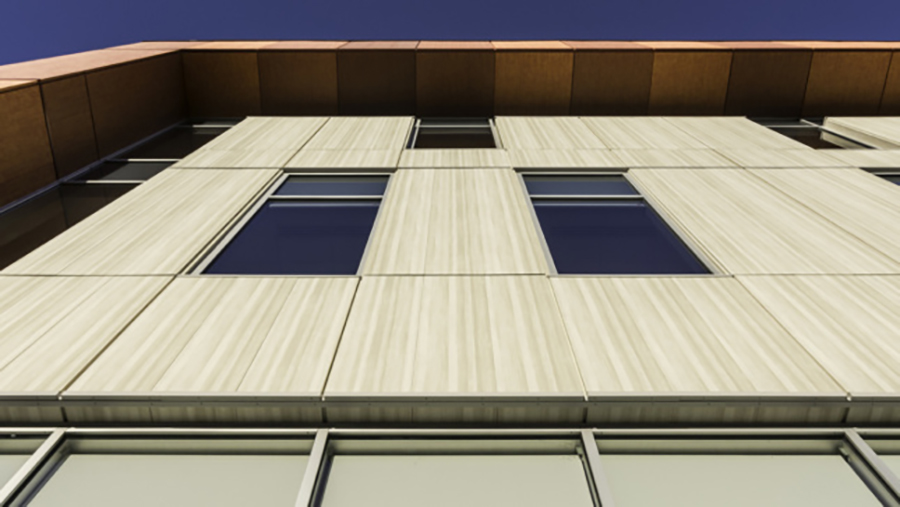 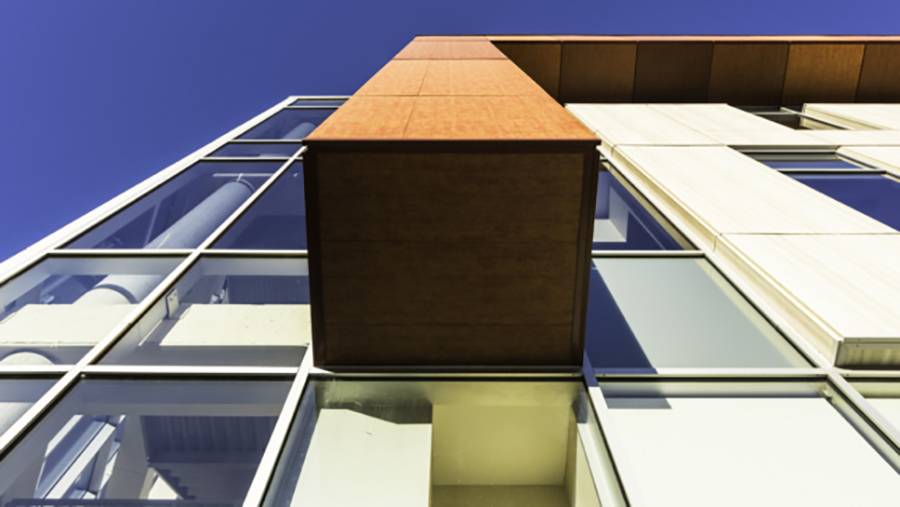 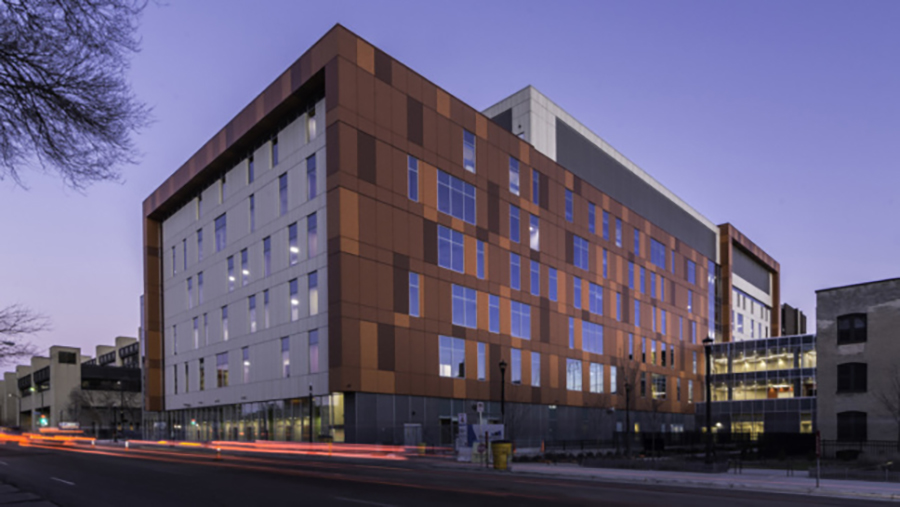 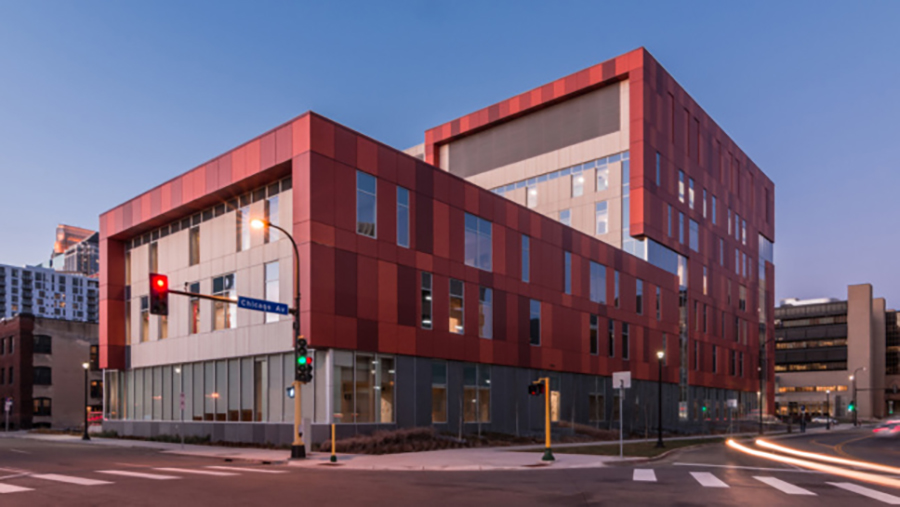 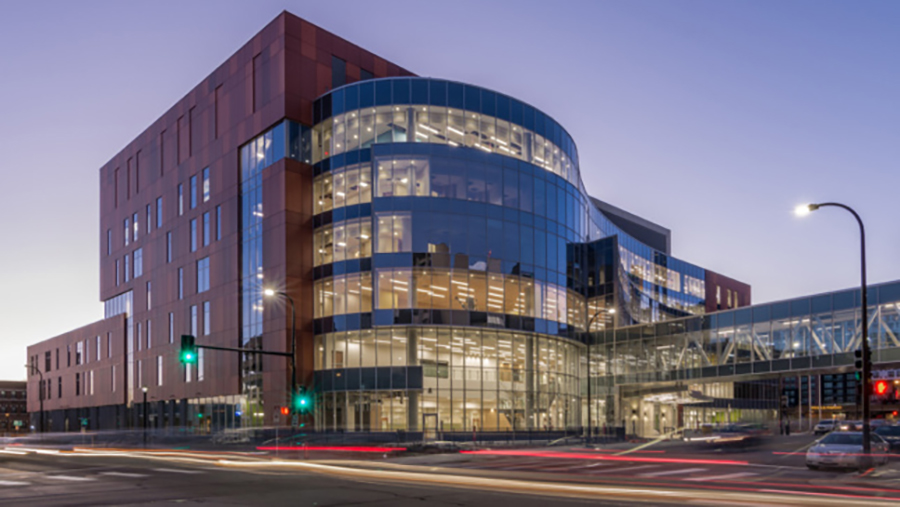 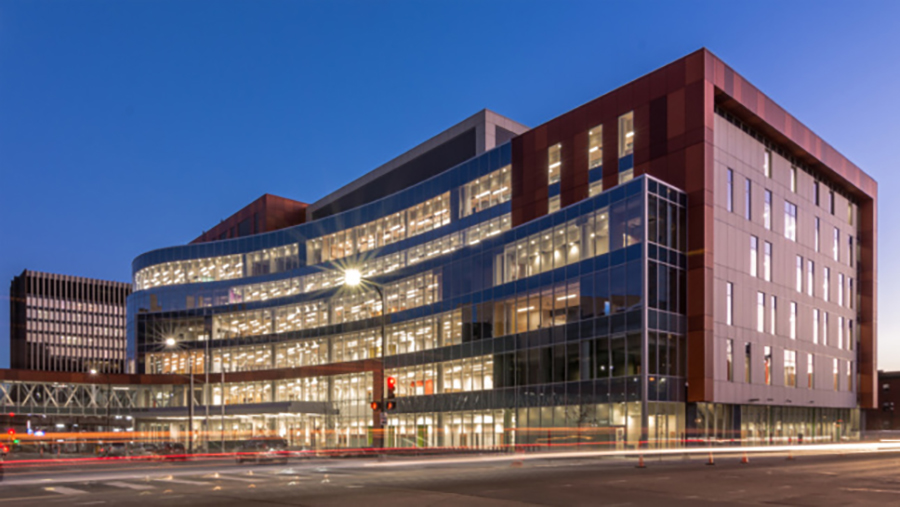 BWBR’s design team said they worked closely with Pure + FreeForm from schematic design through construction administration to ensure the custom finish met aesthetic and budgetary criteria. “The early and constant collaboration was, in fact, what allowed BWBR to comfortably select and realistically defend a more radical solution to represent the character of the client and their facility.”

The design team started out by creating a high-resolution mapping of rust steel and wood grains and manipulated them digitally to be suitable for an application massive in scale. The specific coloration, toning, and detailing of the imagery was finalized through an extensive process requiring several rounds of physical samples and on-site reviews. The collaborative design and manufacturing process allowed BWBR to control precisely the pattern and color that eventually was realized on the facade.

Pure + FreeForm said the scale of the patterning and reflectivity of the samples played a role in final selections. “This process included examining the various conditions of natural light on the surface of the panels and how each condition would affect the perceived color, texture, or pattern. There is also a custom wood grain finish, for which we played with scale so that the pattern would be visible from the user’s point of view. By the end of our design process, we had completed five rounds of proofs and matching to arrive at the final design.”

The panels were “printed” using a Lumiflon ink, allowing for bright orange and red tones in the final finishes while offering corrosion-resistance, which would not be possible with other fluoropolymers.

The refining of the panel configuration was a process of designer-contractor collaboration, which Pure + FreeForm’s custom finishes enabled: to blend patterns on a larger area in a way that was not visually repetitive. The team was able to downsize the metal panel to an economical dimension without sacrificing the perceived large pattern on the facade. This was achieved by combining three narrower panels with butt-joints and using the custom pattern to disguise the seam in between.

Originally, the system was conceived as 3-millimeter plate panels, but moved to 2-millimeter flush panels, which more appropriately suited the budget. By varying the widths and locations of the panel joints, the team was able to create the appearance of larger panels. The 2-millimeter flush panels were attached to the building structure using #14 TEK 3 Long Life coated exterior fasteners.

Coordination with the glazing manufacturer was required for the areas requiring flashing. There were two fabrication challenges, for which McGrath worked extensively with BWBR in the preconstruction and construction phases. First was the actual forming of the flush panels and creating the female pocket in 2-millimeter gauge. The second challenge was the panel layout and alignment with windows, in which BWBR required a layout for the panel reveals to align with the windows throughout. This meant panel sizes had to be carefully coordinated, adjusted both in fabrication design and in the field. The miscellaneous trims in the building did not use custom patterning, but rather a solid paint to match. This was achieved by working closely with McGrath and Mortenson to ensure the solid lines were not distracting from the primary jointing pattern and panel finishes.